When many people travel south from Moab and stop at the Southeastern Utah Welcome Center in Monticello, one major question is, "How do I get to Monument Valley?" Well that all depends on how much of a rush the person is in, and do they want some further adventuring along the way there. The quickest way is to continue traveling south on Route 191 until just outside of Bluff where Route 163 begins, going past Mexican Hat and finally into Monument Valley. The second way there is via State Route 95 which is accessed on the outskirts of Blanding; this is also the road to Natural Bridges National Monument. If you're in no rush to get to Monument Valley, then this is the way I'm going to highly recommend to you; Route 95 alone is chock full of sites and Natural Bridges is an awesome place.

On Route 95, you'll see a sign indicating access to Route 261 and let me tell you, you so want to drive this! The first 23 miles is paved, there is a ranger station along the way; it then turns to a graded road (flattened dirt and rock), but any kind of vehicle can drive upon it; just don't hot rod it if you have a 2 wheel drive vehicle (in other words, a car).  Ok, I'm getting ahead of myself, so lets go back to just outside of Blanding and the turn onto Route 95 (aka Bicentennial Highway). 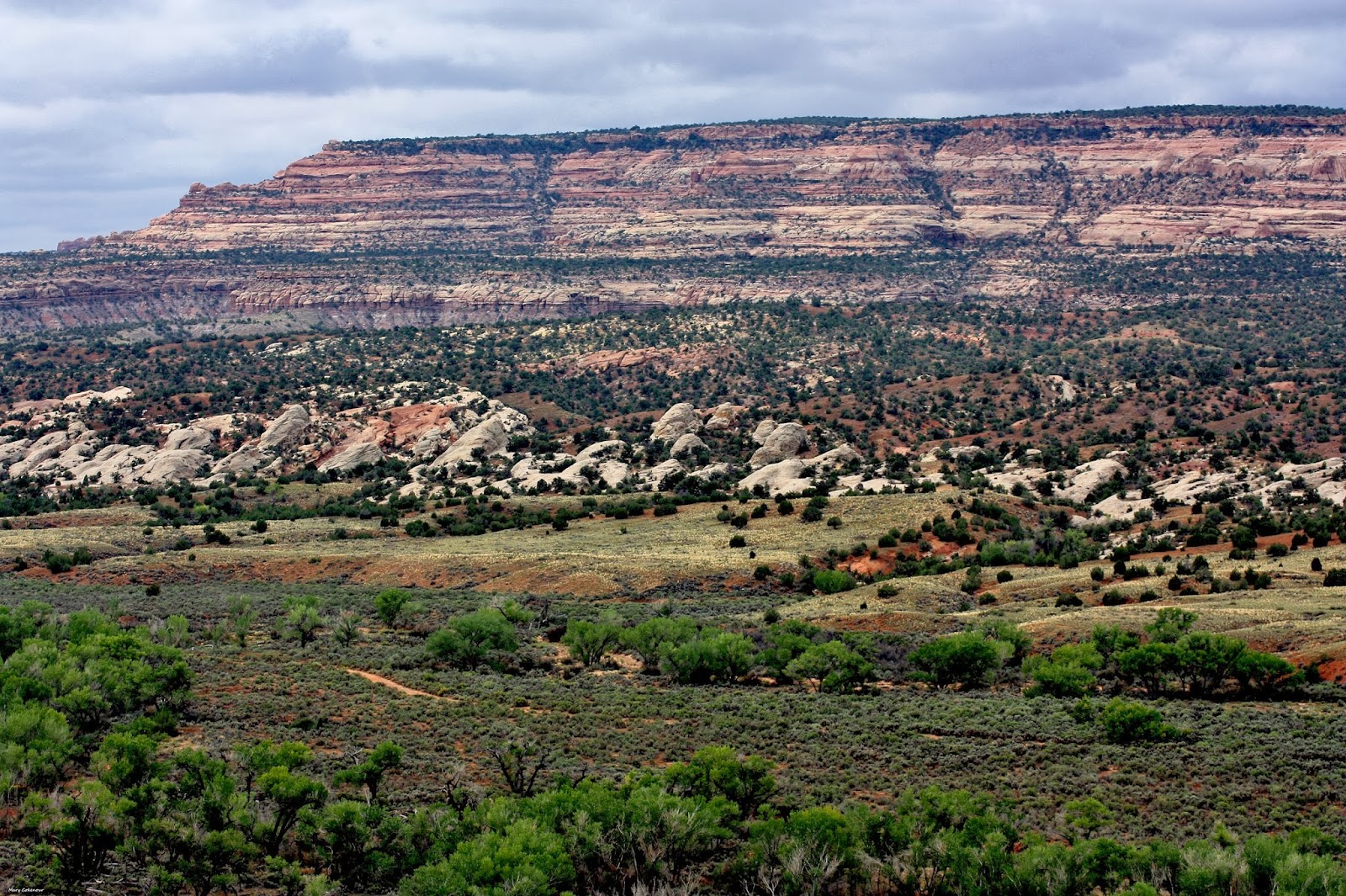 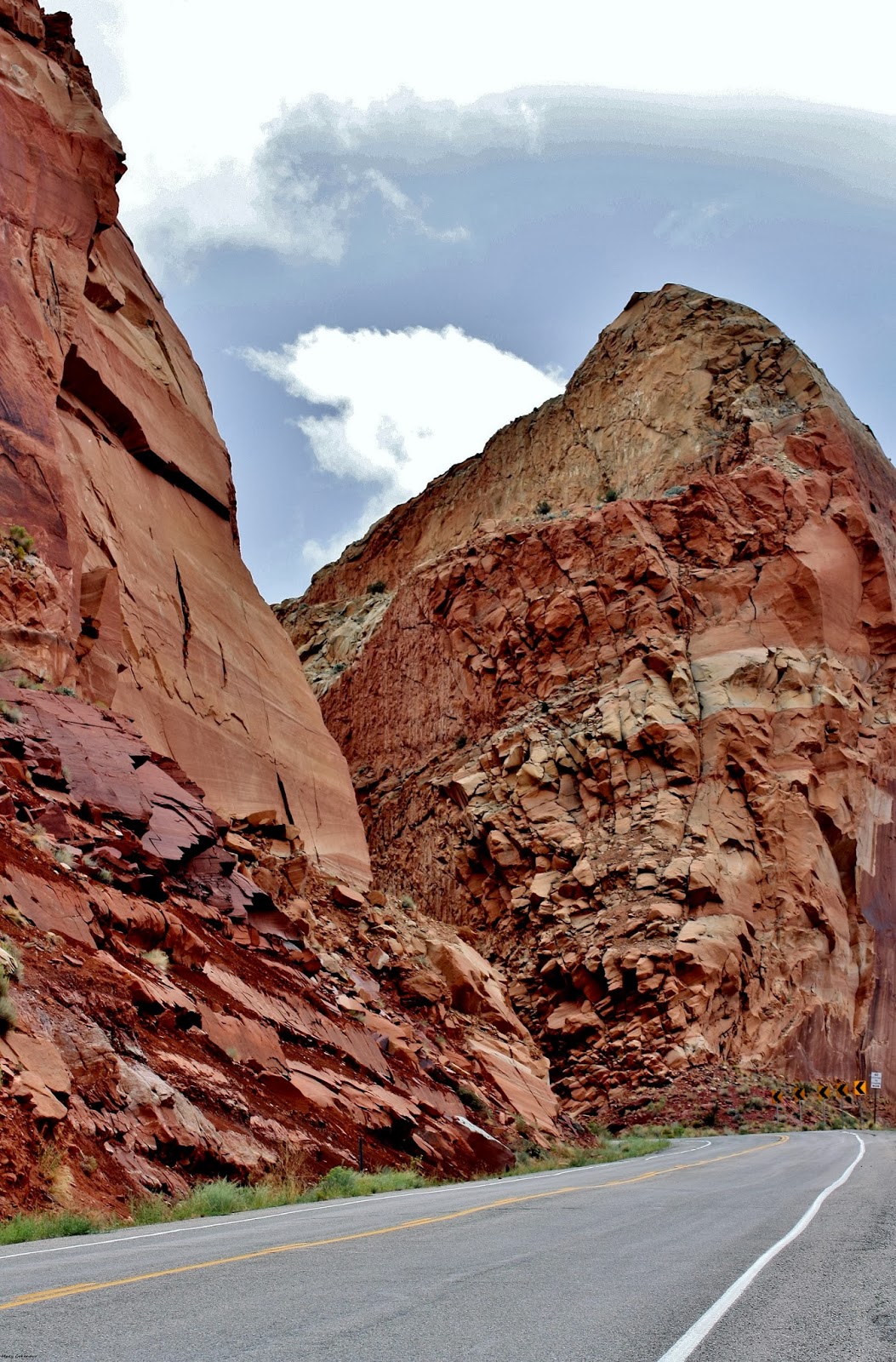 Along the way, you'll pass by the roadside ruins of Butler Wash and Mule Canyon; there are more ruins further within the land, but you have to hike to get to them.  The canyons, valleys and rock formations are outstanding along this stretch of roadway.  They do not lessen up as you continue traveling, if that is your goal, to Hanksville to hook up onto Route 24 going westward.  At one point you'll travel through narrow stretches of road between huge sandstone hills; there is no parking in these areas and there will be warnings of falling rock.  Stop further on to take photos, especially of the beautiful vistas that open up before you. 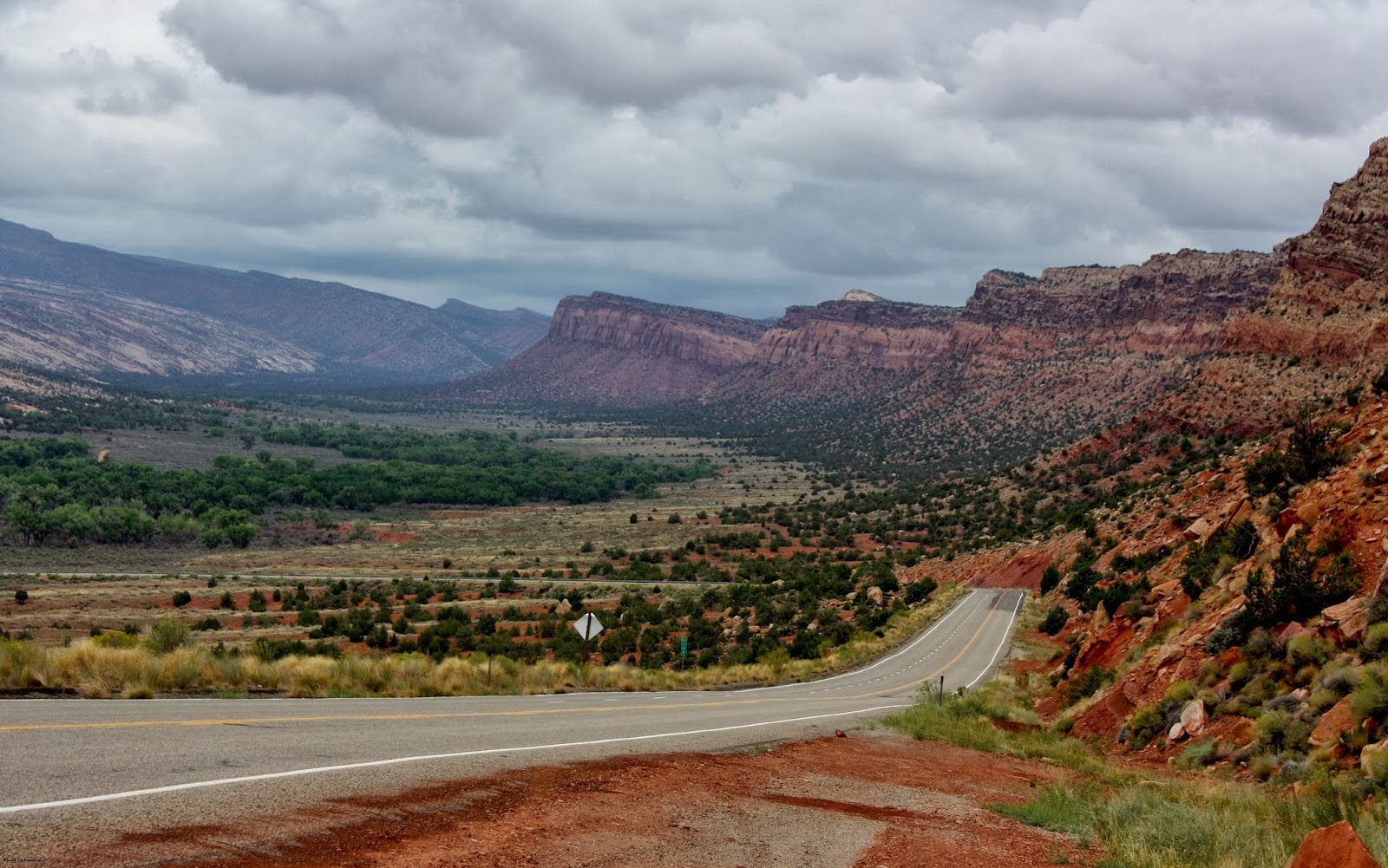 Whether you went to Natural Bridges and backtracked, or decided to go directly onto Route 261, there will be signs on the roadway to help you find it.  As I stated before, the first 23 miles is paved; there will be signs indicating different canyons, creeks, and the location of the ranger station.  The landscaping you might find on the boring side; mostly sagebrush, desert and low growing trees; the truly exciting parts come much later on down the road.  That is why I'm doing Route 261 in parts, it is as you come to these different sections (Muley Point, Moki Dugway, Valley of the Gods, Goosenecks State Park) that your appreciation for the area will explode! 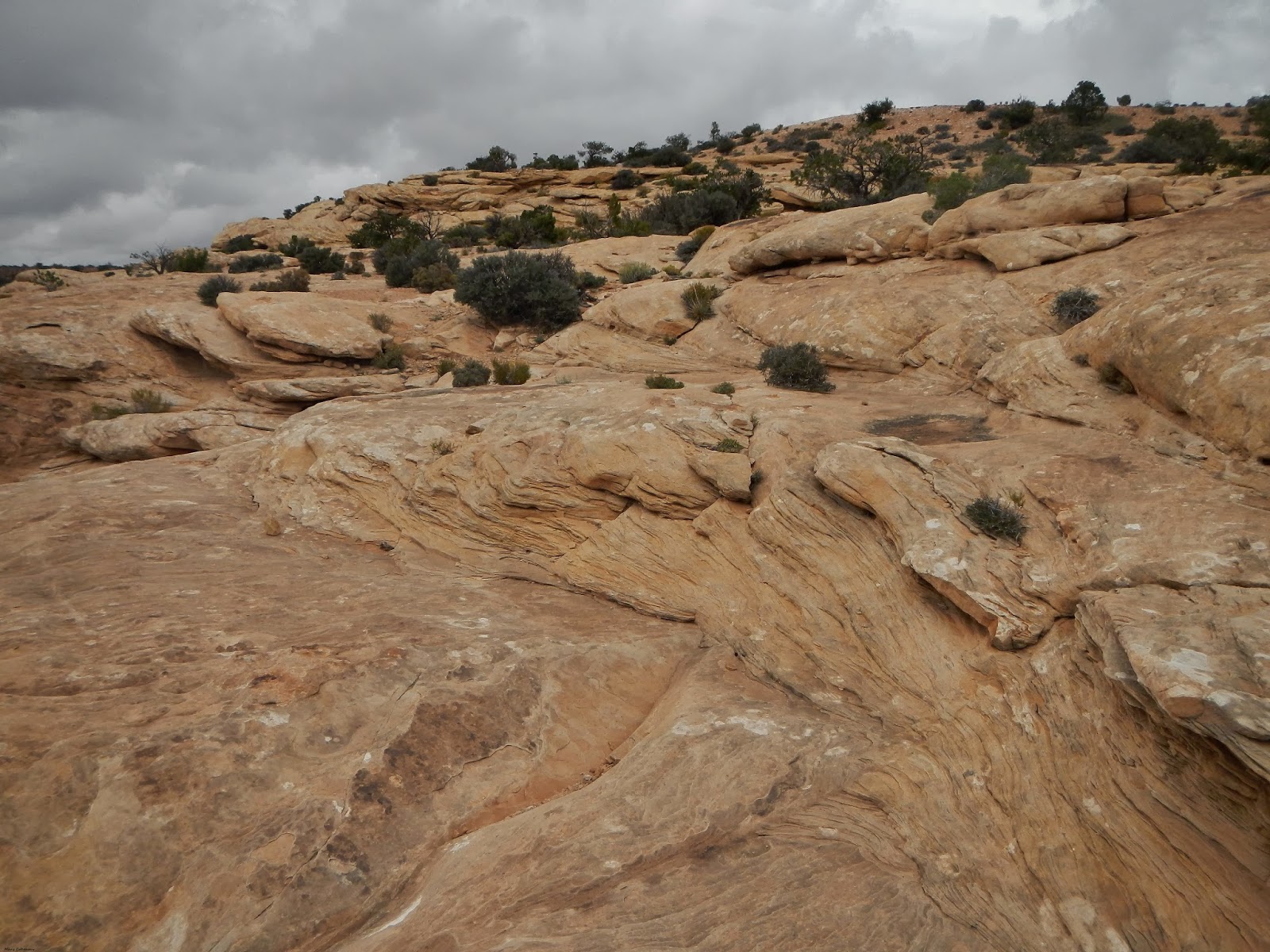 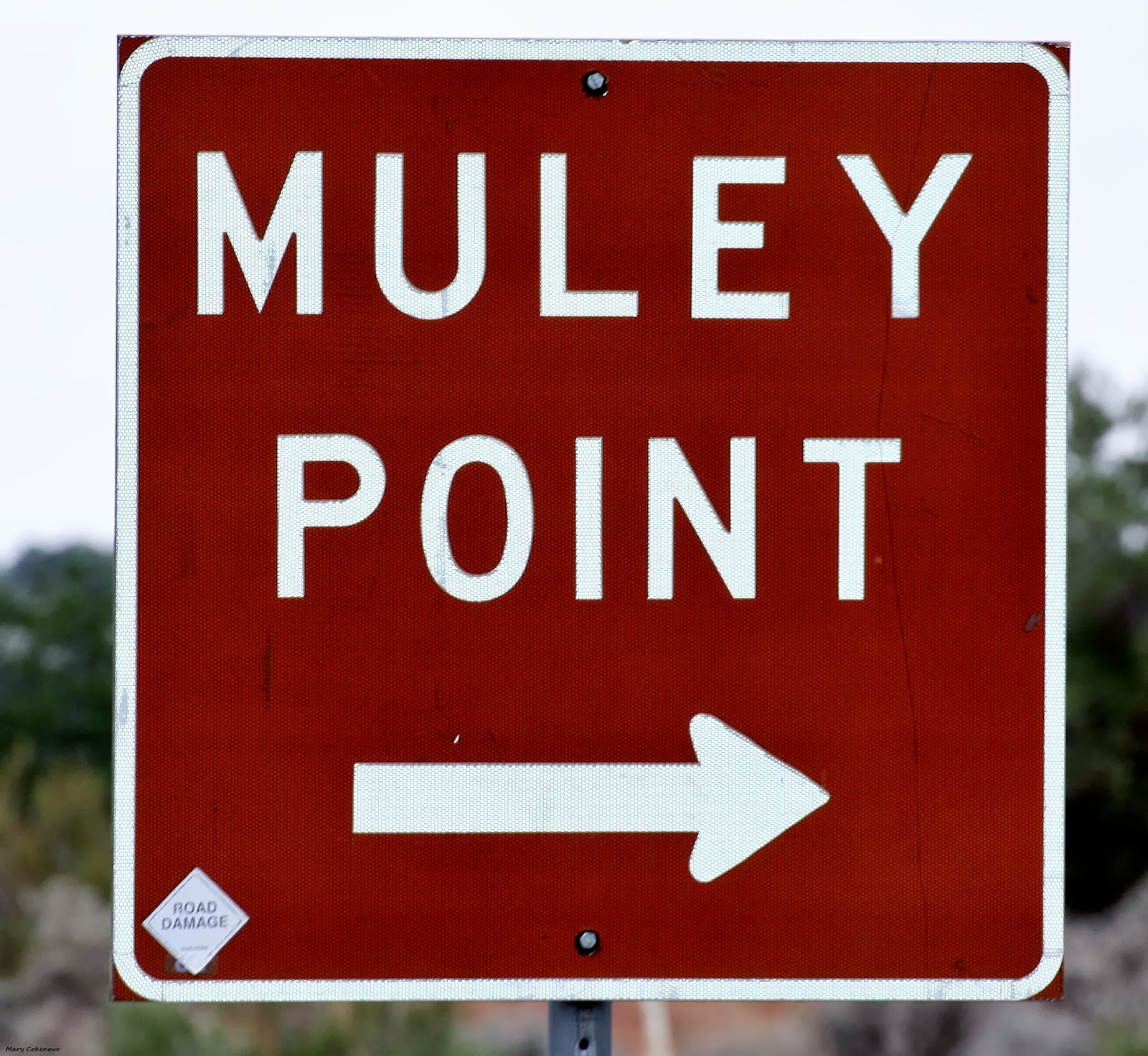 Again, the roadway will turn to graded dirt and rock; the landscape will stay pretty much the same and eventually you'll see a warning sign for truckers about the steep grading up ahead (in other words, the Moki Dugway is coming up).  However, you'll see another sign with an arrow pointing down a gravel lined road; this is the 5 mile road to Muley Point...you want to make this turn!!!  The road will end in an area surrounded by slickrock; depending on what type of vehicle you have, you may have to park right there, or you can maneuver over the slickrock.  You will be doing a bit of walking around, there are no guardrails, so if you have pets, leash them up tightly or leave them in the vehicle; if you have children, pay attention to them and where they are at all times.   Camping is allowed in this area; it's primitive and you are expected to take all your trash and belongings with you when you leave. 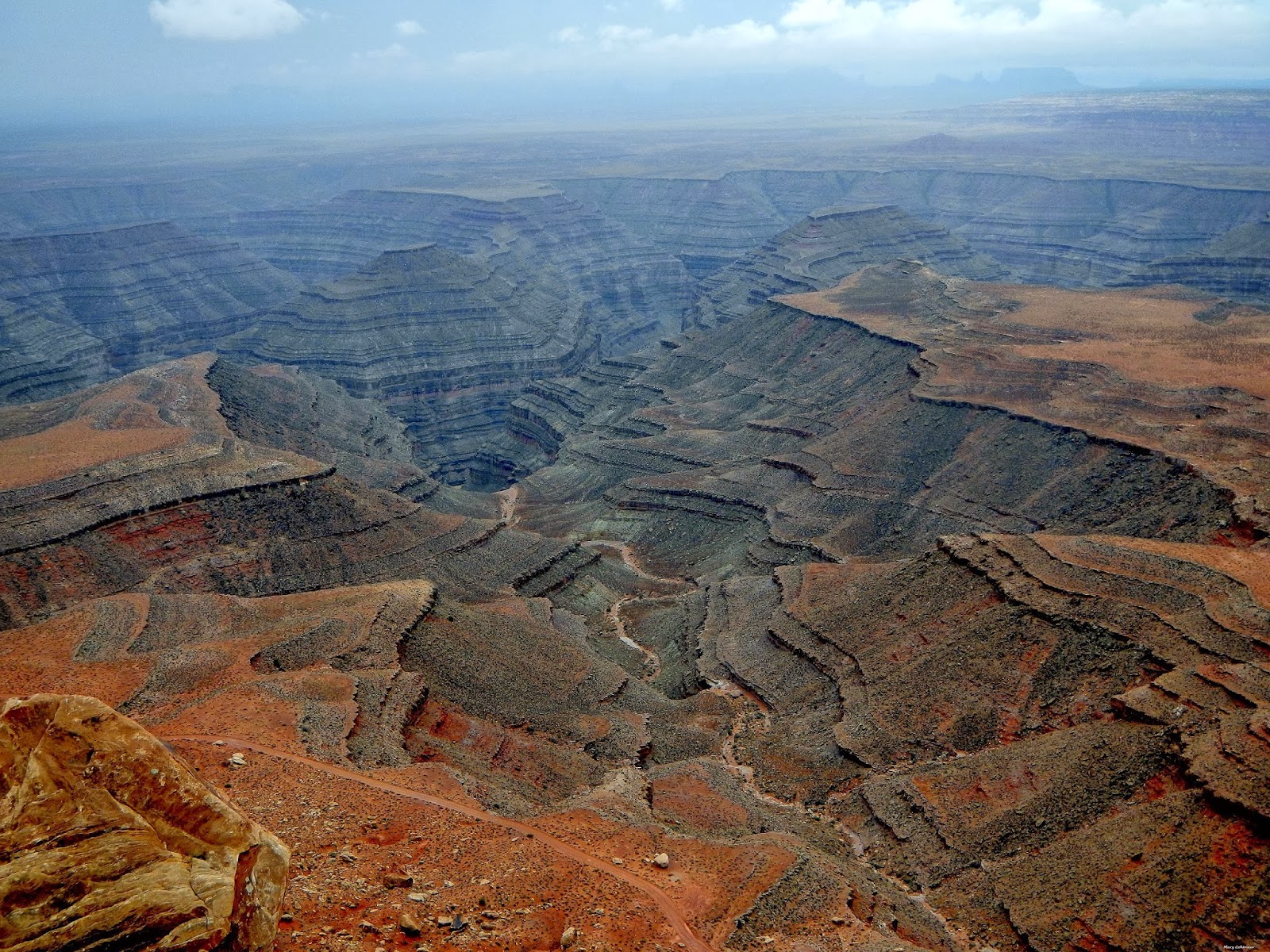 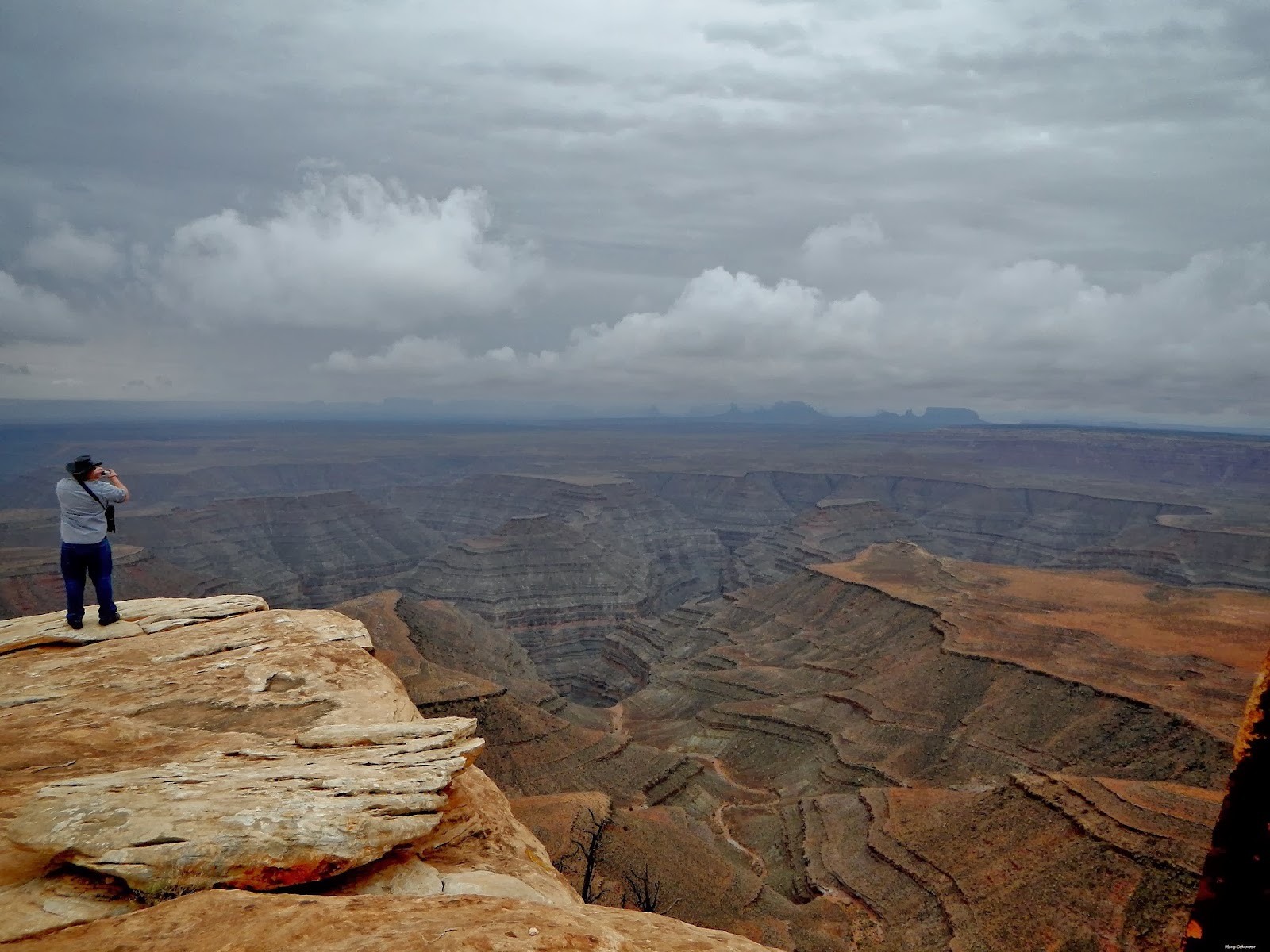 Welcome to Muley Point!  Even as you first step onto the slickrock, you will be stunned at what you begin to see before you. Muley Point is at the southern edge of Cedar Mesa and the name Muley means "hornless" in reference to cattle or deer.  Monument Valley is visible in the distance (south) while the San Juan River cuts into the canyon below.   If you parked your vehicle before the slickrock, you would have noticed that the road curves to the right and a sign indicating Johns Canyon.   Johns Canyon Road is accessible from Muley Point and you can see it curving around that large mesa to the right of the San Juan River. 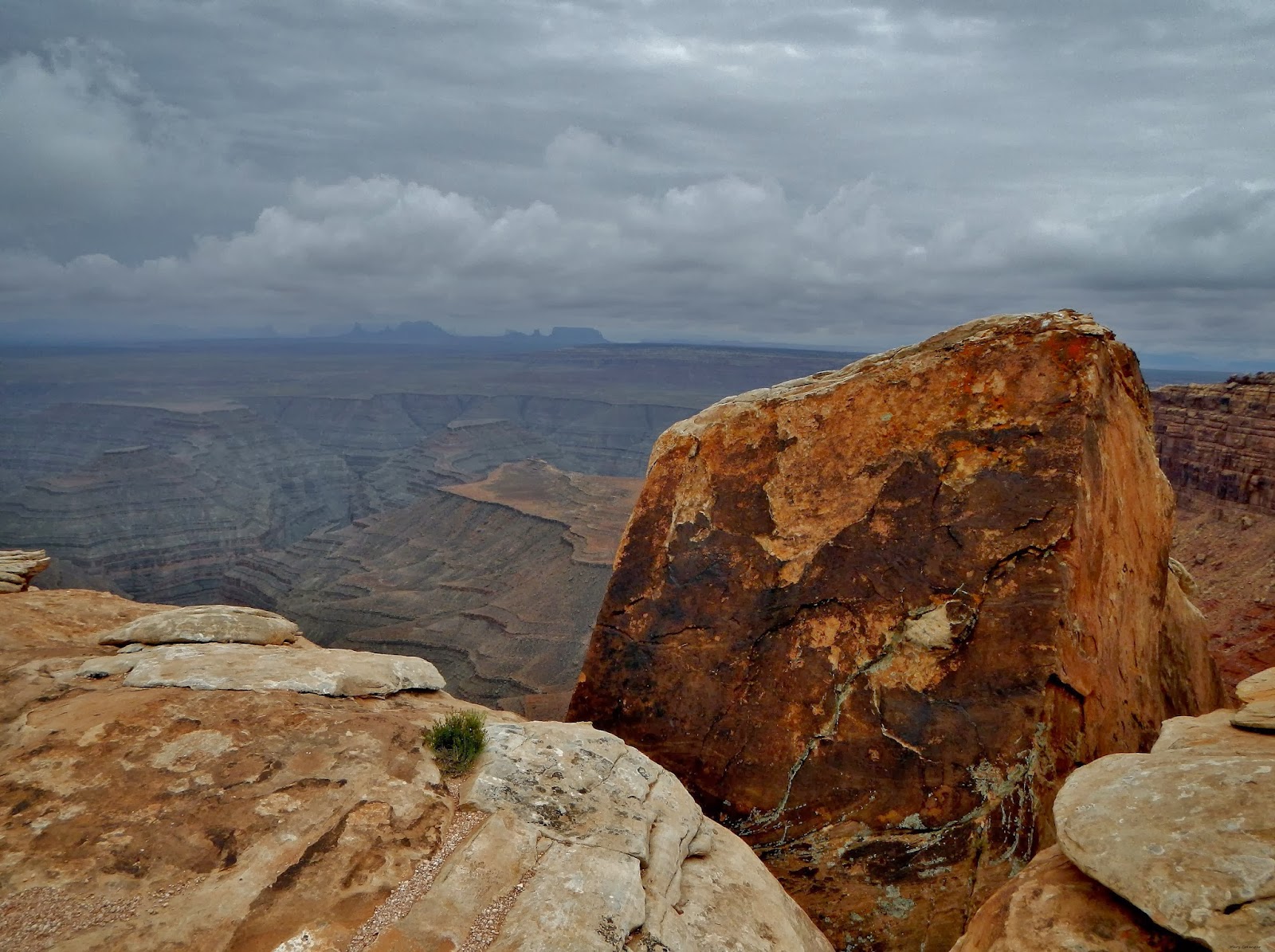 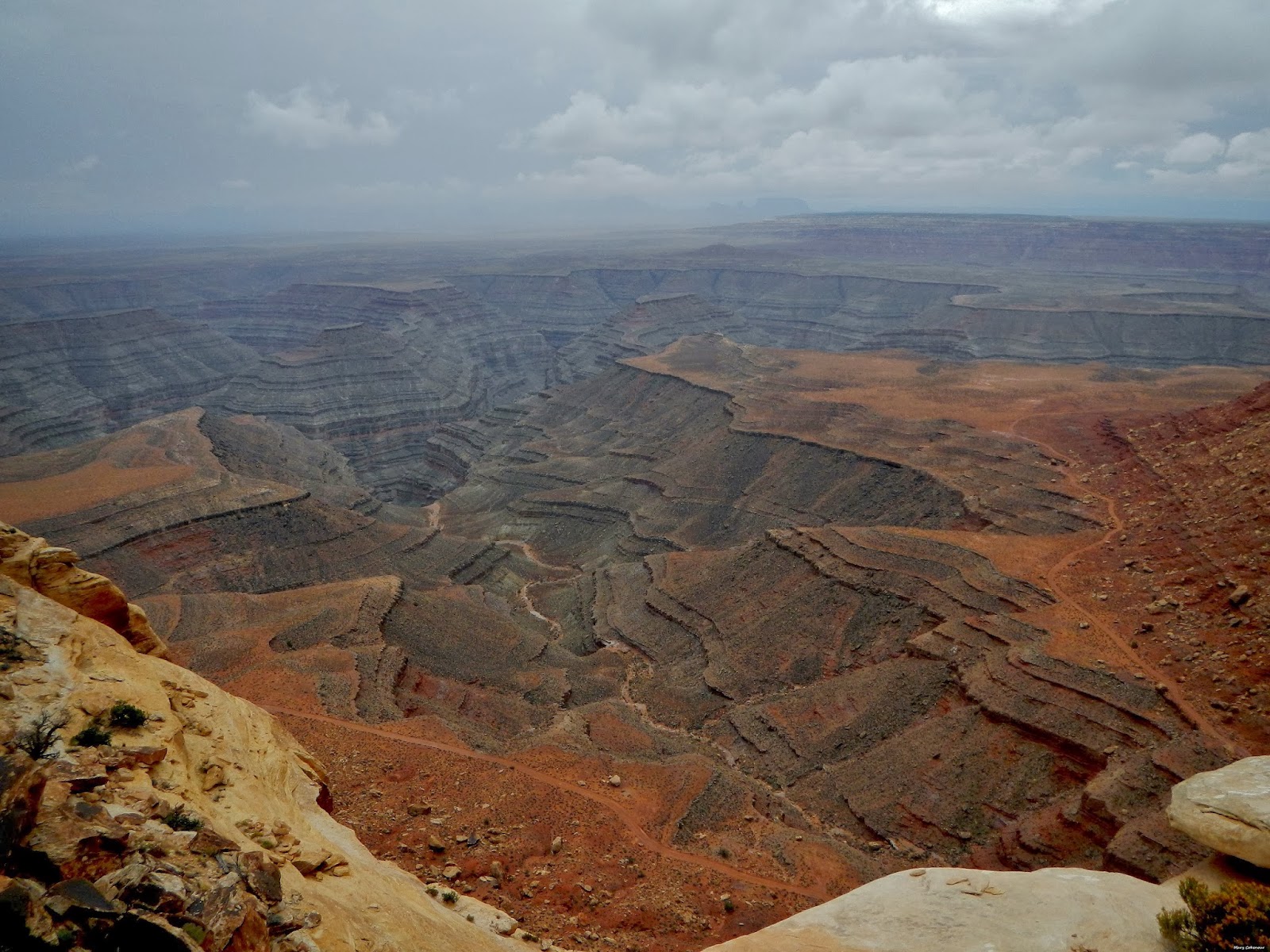 Monument Valley is seen in the south. 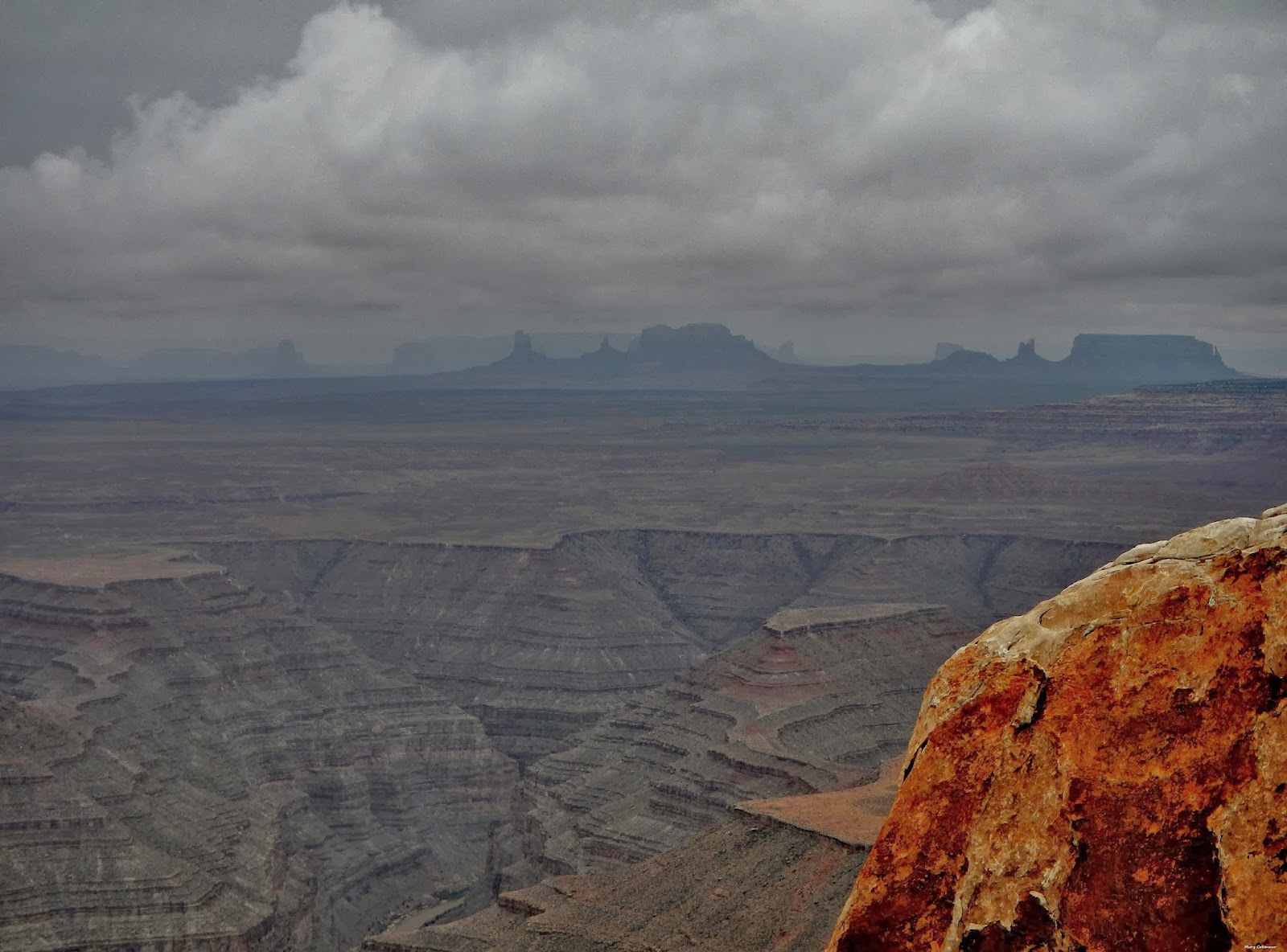 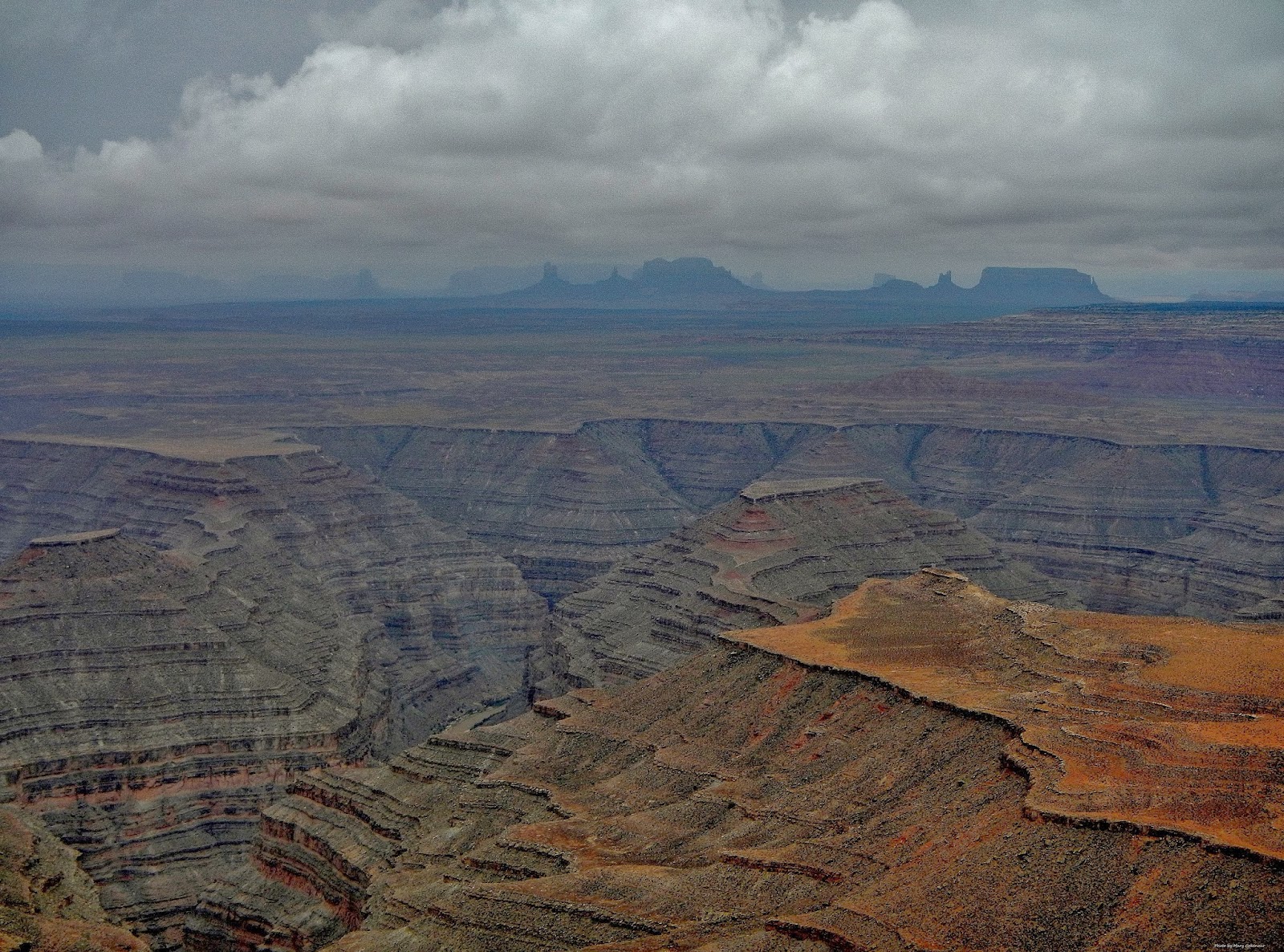 
The Cutler is a rock unit that is spread across the U.S. states of Arizona, northwest New Mexico, southeast Utah and southwest Colorado. In Arizona and Utah it is called the Cutler Group; however, the United States Geological Survey (USGS) name is Cutler Formation; Cedar Mesa (Utah) and Canyon de Chelly (Arizona) are part of this unit.


Don't be in such a rush to go riding down the Moki Dugway just yet; make sure to take that 5 mile gravel road to Muley Point.  Otherwise, you'll be cheating yourself out an experience for the senses.