The Natural Wonder of Natural Bridges.

So you're traveling down State Route 95 in San Juan County; you've already visited Butler Wash Ruins and Mule Canyon Ruins and are wondering where to go to next. Several choices are up ahead; Route 261 will take you down the twisting and turning three miles of the Moki Dugway; Goosenecks State Park; Valley of the Gods before you reach Route 163 near Mexican Hat. Or you can take one of the routes that lead up into the Abajo Mountains; but I'm going to recommend you stay on Route 95 and visit Natural Bridges National Monument.   It will only take one to two hours of your time before you can make that U-turn back to one of the other choices; and you won't regret it. 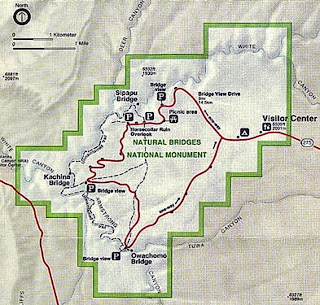 In 1908, President Theodore Roosevelt declared Natural Bridges a Monument making it the first National Monument in the state of Utah.  There are three bridges, Kachina, Owachomo and Sipapu (all Hopi names) carved out of the sandstone and slickrock by the elements; ancient ruins and beautiful scenic views make this park a must see adventure. The entire drive on the paved road within the park will take 45 minutes to one hour if doing just the basic stop - look - take photos; but the extra time put into walking the paths is worthwhile.   Hubby and I were there for three hours, yes three; walking the paths and over the slickrock to get the ultimate viewpoints of the bridges was exhilarating!  Hint: bring a picnic meal with you; stretch out, eat, commune with nature and relax.

Now I'm not going to bore you with all the details about each bridge; you can get that off the informational boards.  I'll let the photos do the talking for me; the saying, "A picture is worth a thousand words" is no lie. 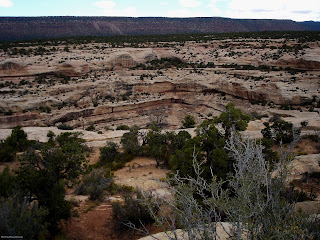 Horsecollar Ruin is visible from an overlook a short hike from Bridge View Drive.  Abandoned more than 700 years ago, it includes an undisturbed rectangular kiva with the original roof and interior, and two granaries with unusual oval shaped doors whose shape resembles horse collars.  However, if you look at the canyon this ruin is located in, and use a bit of imagination, the canyon itself sort of resembles the shape of a horsecollar. 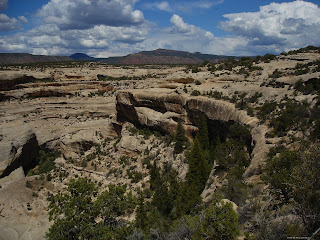 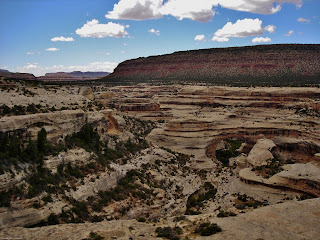 The first bridge, near to Horsecollar Ruin, is Sipapu (meaning "the place of emergence"). 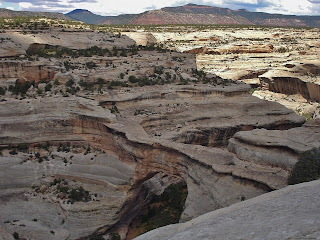 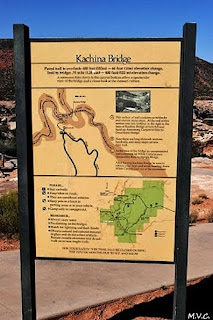 The second bridge is Kachina (or ghost dancer); rock art on the bridge resembles symbols found on Kachina dolls.  To get the best view of the bridge, you'll have to do some walking over a slickrock area which is a perfect place to have your picnic.  The overall view is outstanding!

Last, but definitely not least, is Owachomo (meaning "rock mound") Bridge; such a delicate looking structure, and yet riders and horse drawn wagons traveled over it...including Teddy Roosevelt.  There is a crack in the bridge, so there is a possibility of it crumbling and falling; in our lifetime...who can truly say?


There you have it, a short adventure to a place of natural wonders; don't pass it by!

Posted by Mary Cokenour at 1:57 PM