When we first moved to Utah in 2009, we made sure to take a road trip at least once a week; we were doing so much work on the "handyman special" home we had purchased and needed the break away.  We'd already been on State Route 95 to see two ruin area and Natural Bridges, now it was time to see what was along to its end at Hanksville.  As much as I would love to post a photo of every interesting site we saw, there would be too, too many; so I'm going to give you some basic shots to encourage your own adventurous spirit.  First stop after Natural Bridges National Monument is Fry Canyon... 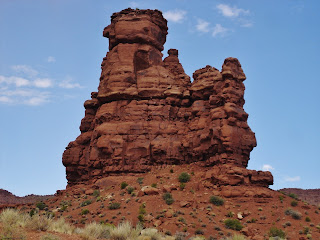 Fry Canyon was established in 1955 when the mining boon was in full swing in that area. Besides housing, there was a lodge, general store, post office and even a small school for the miners' children. After mining became virtually done, Fry Canyon became a ghost town; there are a few people who still live there, but the buildings are private property. There is a rough road that goes past the "lodge" and leads to a slot canyons. There are some interesting formations in the canyon area; this photo is on Route 95 itself. 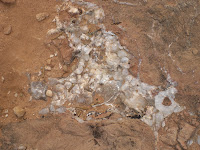 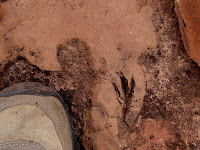 White Canyon stretches from Fry Canyon to Hite; Cheesebox Canyon is in this region also.  There is so much to see, and so many places to hike; our favorite is over a slickrock region.  While there we found dinosaur tracks and quartz crystals embedded into the stone.  The views are astounding, the silence is golden; it's a great place to lie down, watch the clouds (if any) and relax.  One shape you'll see in the distance is called "Jacob's Chair" and like the "Cheesebox", there are 4 wheel drive trails that can be driven out to it.  I also am posting a photo of a desert tower we saw while riding along Route 95, but I cannot find any reference to it; just one of those formations that is unnamed I guess. 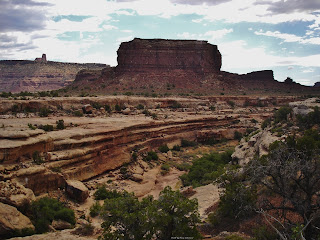 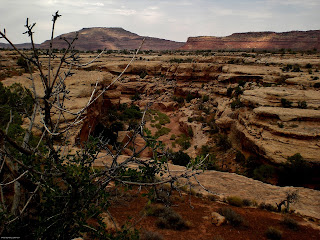 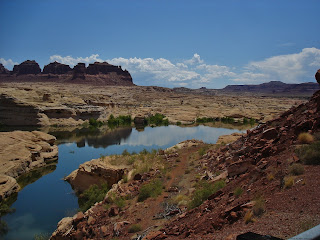 At the Hite Overlook, you'll get to see a section of Lake Powell and the little town of Hite; there is an informational board there which gives you history of the area.  Now, in case you're wondering about mileage to this, that and the other...that is what a map is for.  Basically I don't truly know nor care, what I can tell you is that we did bring a picnic lunch which we enjoyed at the Hog Springs Rest Area; and stopped for milk shakes at Blondie's located in Hanksville.  To make the circle back to Monticello, we were away for about 12 hours and had the best time!!!  Photos of Hite Overlook and then the adventure continues.... 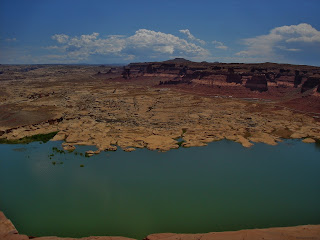 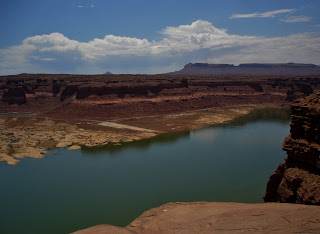 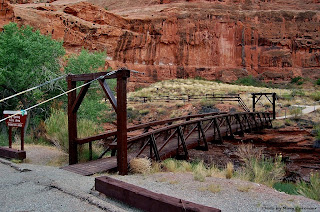 While we were at Hite, we saw storm clouds starting to move in.  Getting to Hog Springs Rest Area was a great time to stop and take a late lunch break (we brought a picnic meal with us).  There are wooden tables and benches underneath wooden shelters; and while a thunderstorm opened up around us, we enjoyed our meal.  When the storm was over, we did a little exploring of North Wash Canyon and actually found a large section of a spiral shelled fossil lying in a river bed.  Pretty neat! 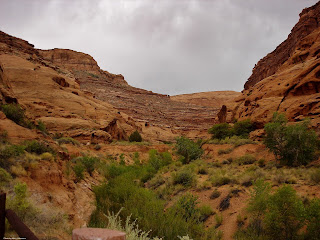 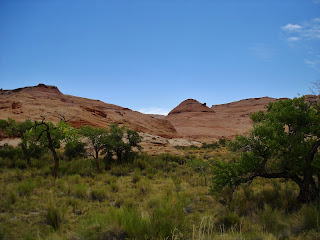 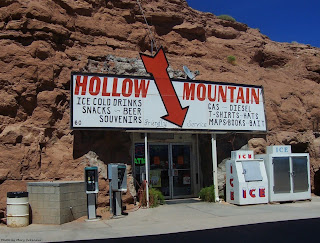 The sky began clearing up as we started on our way towards Hanksville; a small town with surprisingly many places to gas up or dine in.  Then again it's no wonder, since the next area you can do this in is several hours away.  At Hanksville, where State Route 95 ends, you can pick up Route 24; going north-east takes you past Goblin Valley State Park and eventually to Interstate 70; going  west is the Capitol Reef National Park.  Whichever way you're going, make sure to have a full tank of gas and bottled water...and stop at Blondie's for a meal if you didn't have a picnic; and most especially have one of their milk shakes.

That's it folks, I've completed the tour of State Route 95, beginning outside of Blanding and ending at Hanksville.  We did take Route 24 north-east and stopped at Goblin Valley...oh what fun that was!!!
Mary Cokenour
Posted by Mary Cokenour at 12:27 PM