The Valley of the Gods - Part One 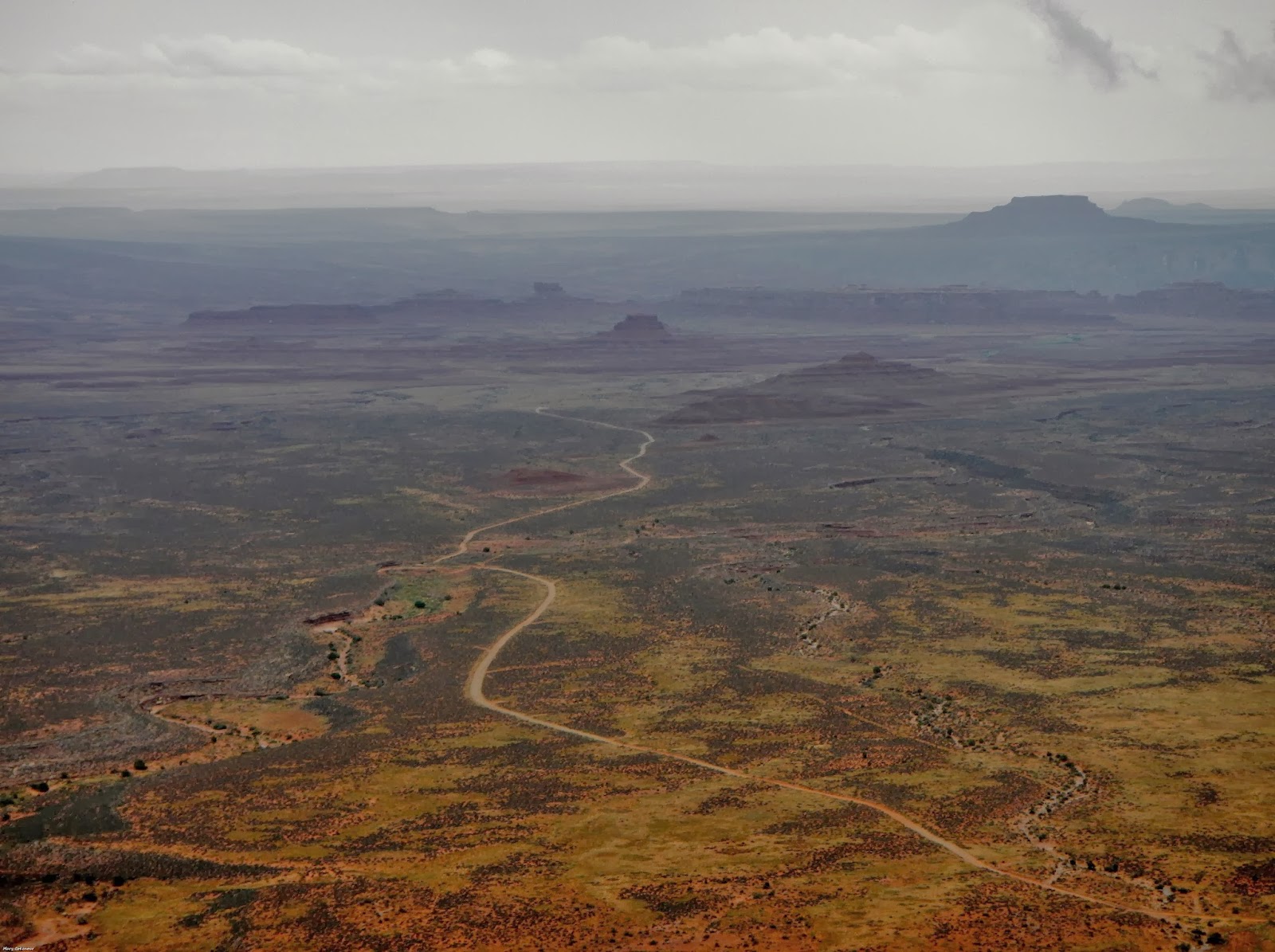 As you travel down the Moki Dugway; the Valley of the Gods opens up beneath you and while it might not look like much, don't be fooled. Valley of the Gods could be likened to a miniature version of Monument Valley; formations are not as massive, but still on the scale as spectacular. The first time down the Moki, the sky was stormy and clouds had descended onto the Valley; the formations moved through the mist as silent spectres. 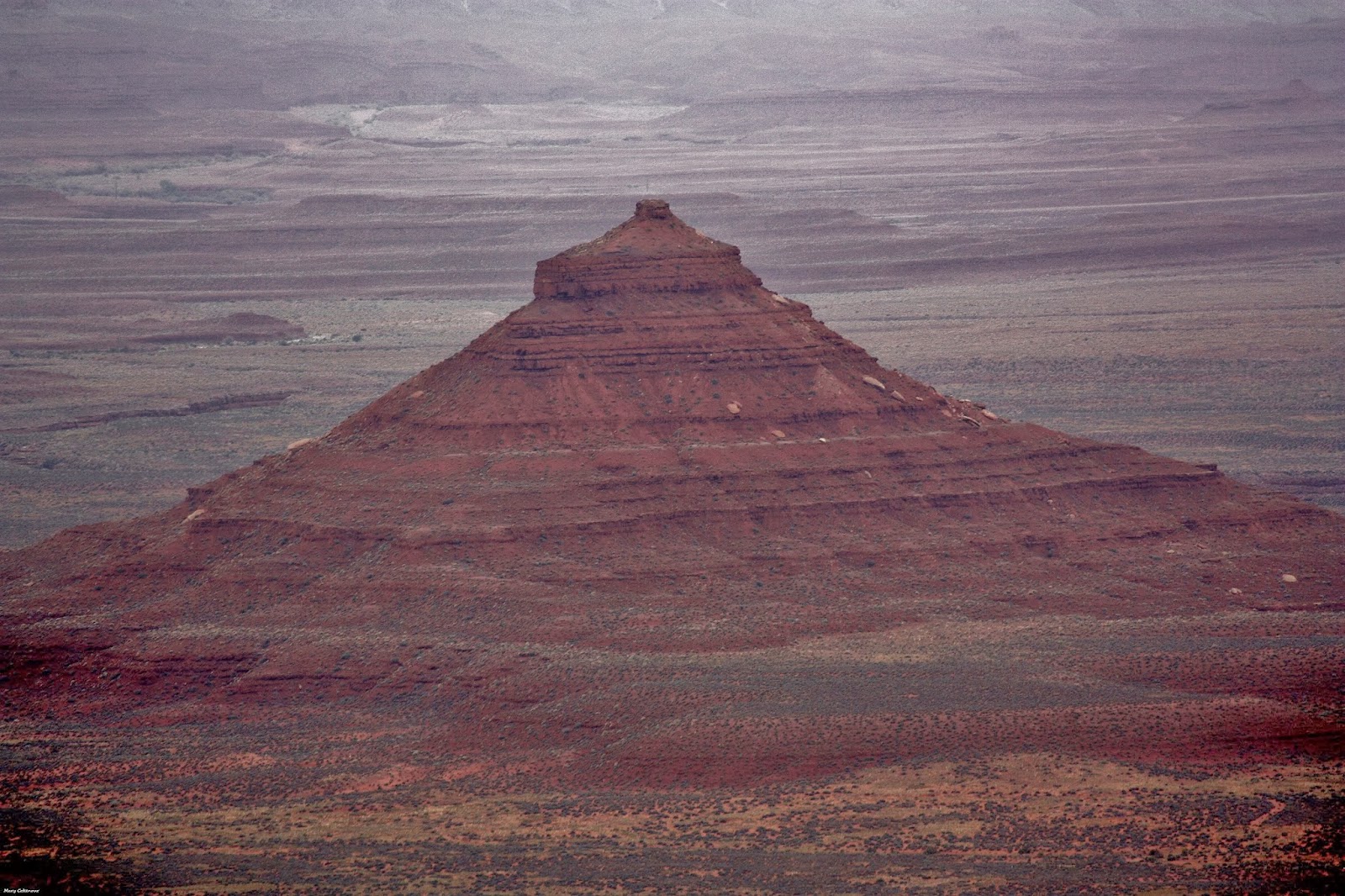 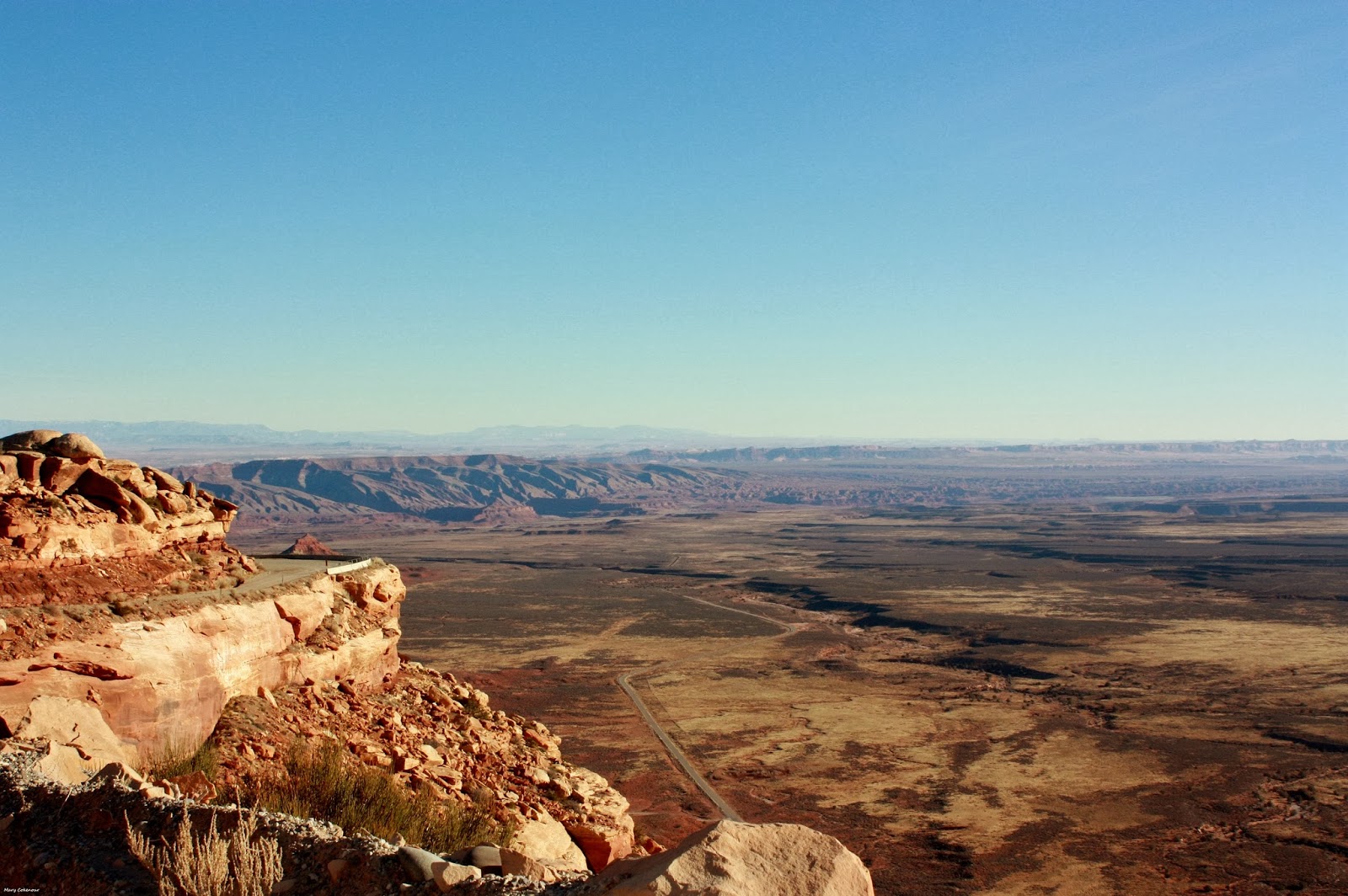 The second time down the Moki, the sky was clear and sunny; you could see forever, but the sun still caused a haze in the distance making Monument Valley seem encased in its own misty shroud.  Valley of the Gods, however, could be seen in its desert glory; again, just because you can only see a few formations, there is more than you know down there waiting to be discovered. 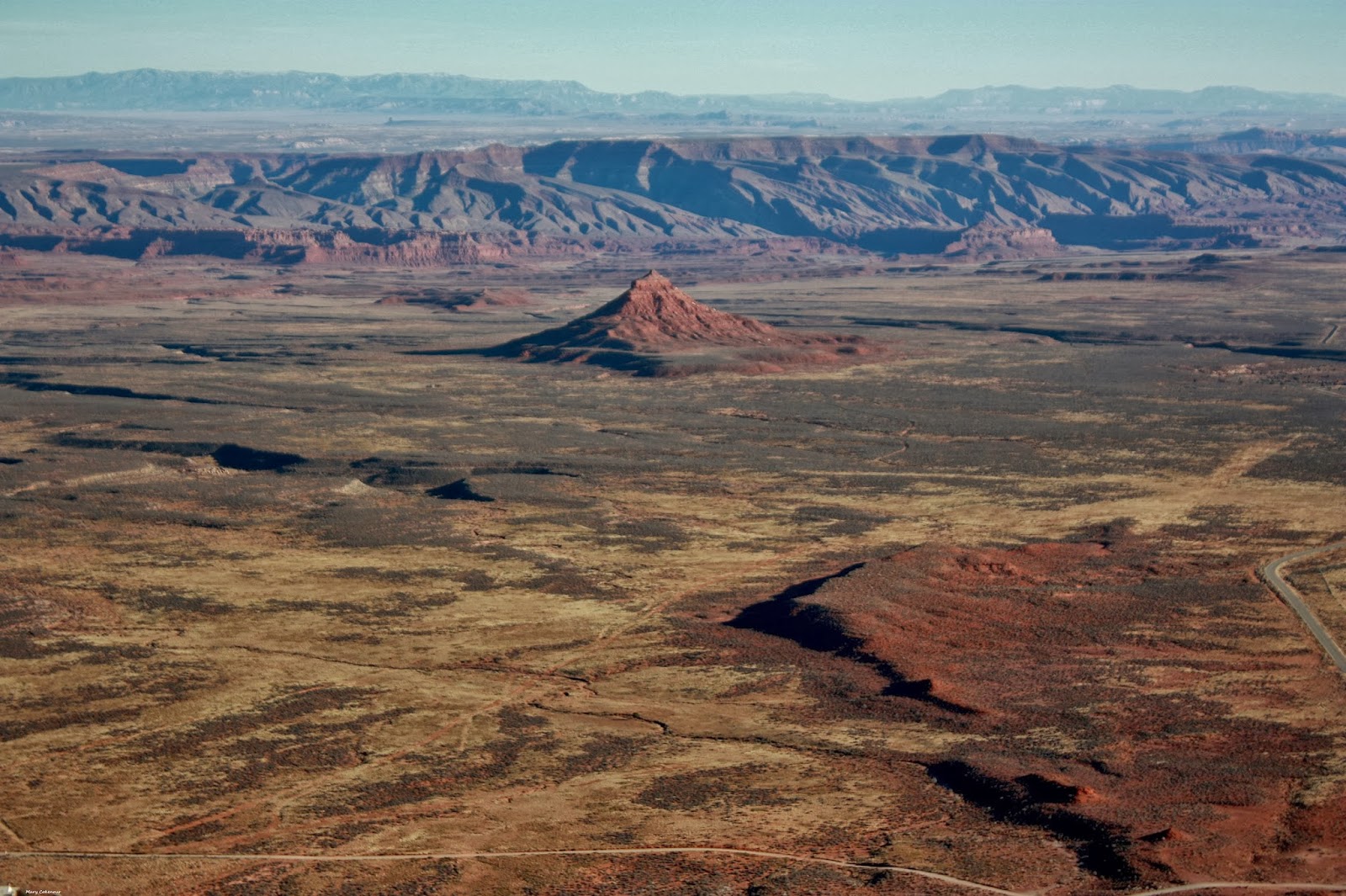 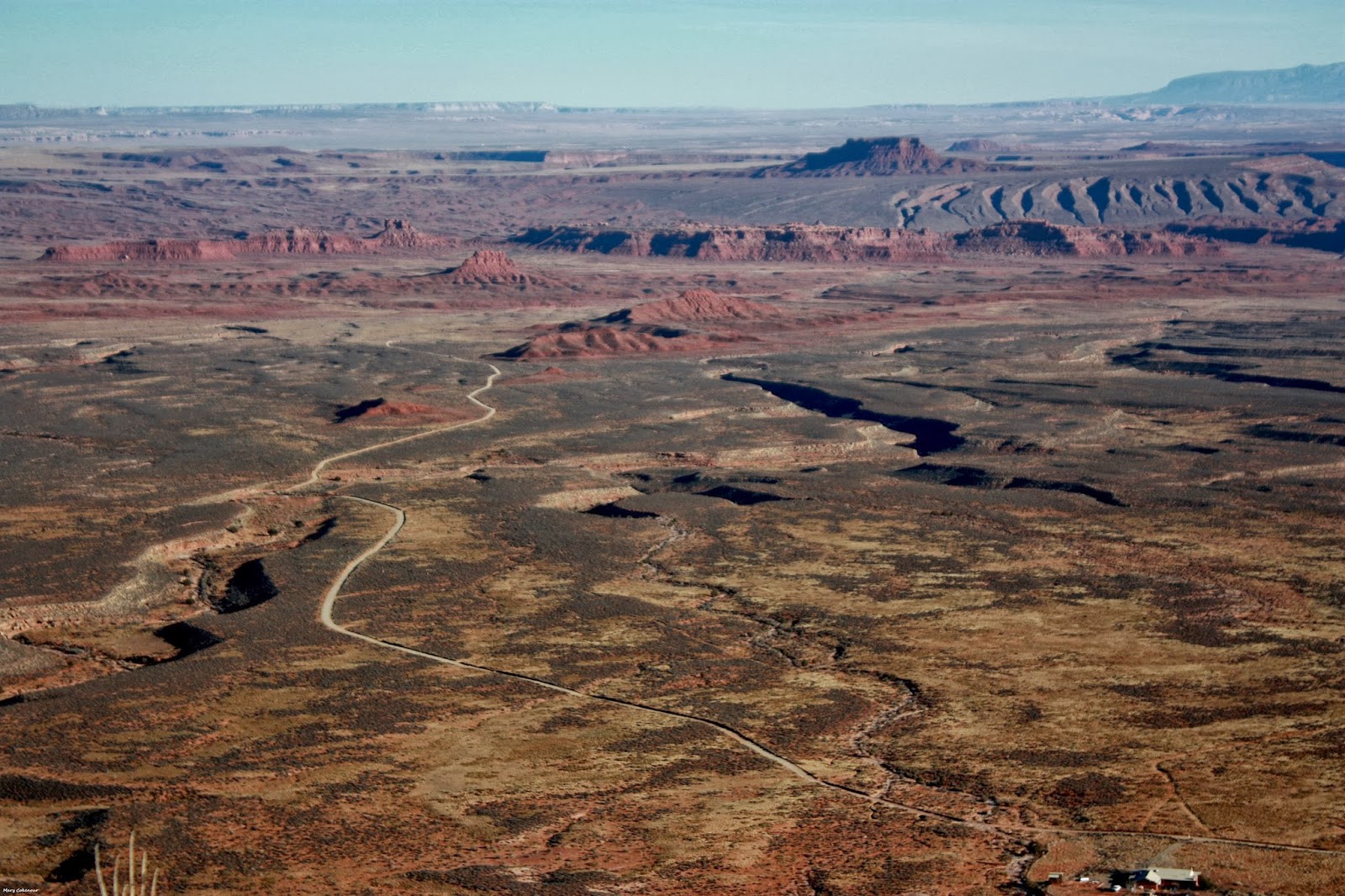 The BLM does have a small brochure about Valley of the Gods; the map isn't the greatest; I finally was able to find a better map online, but still needed to write in more details than even it had. 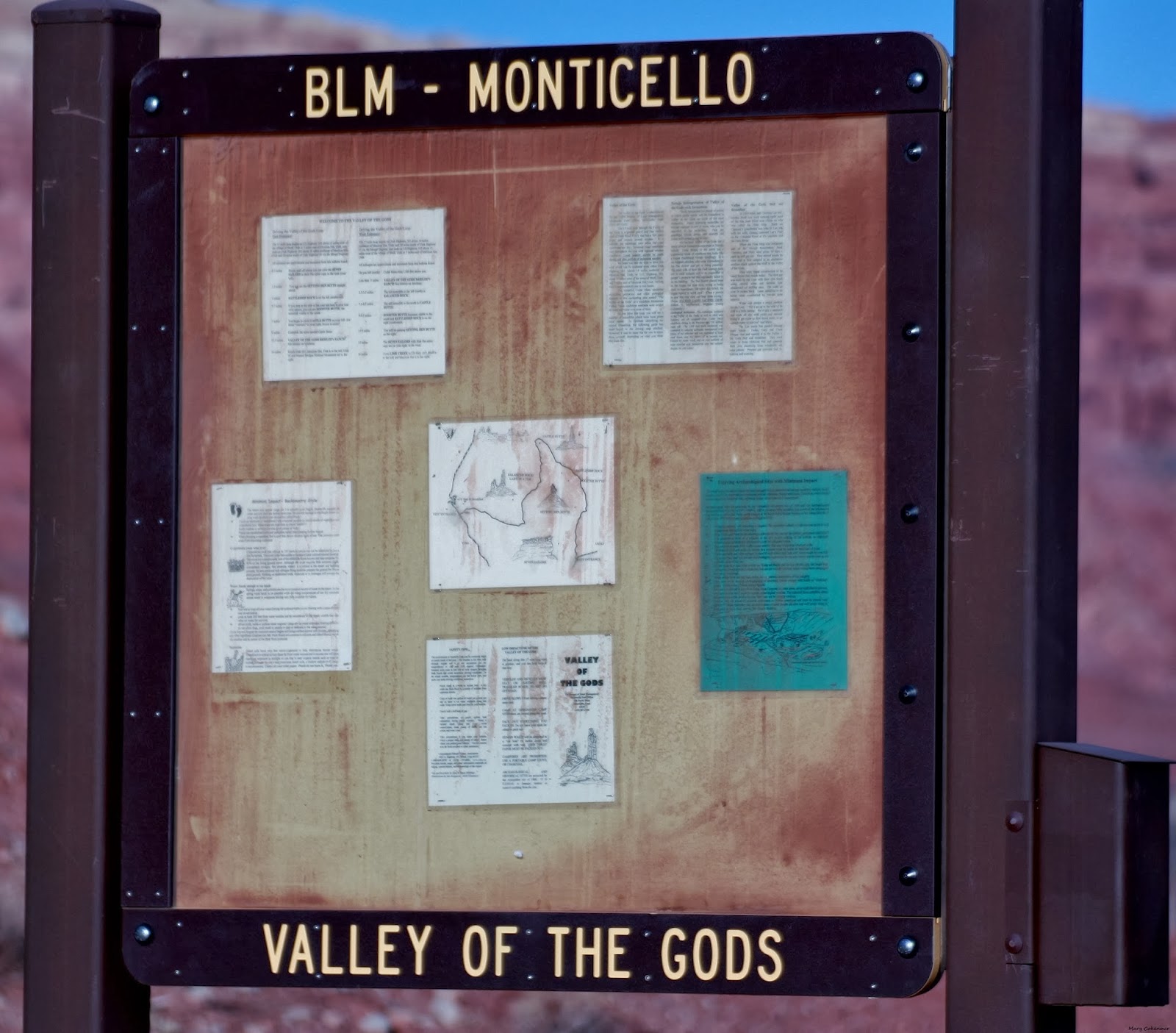 To enter the Valley once you're on level ground again, make a left turn onto Route 242; this will begin the 17-mile graded sand and gravel loop that winds through the Valley. There are no facilities, gas stations, stores or services; make sure you have 3/4 to full gas tank, bottled water, snacks and whatever else you might need; cell service...forget about it.  Just a little way along the road, you will pass by the Valley of the Gods Bed & Breakfast. 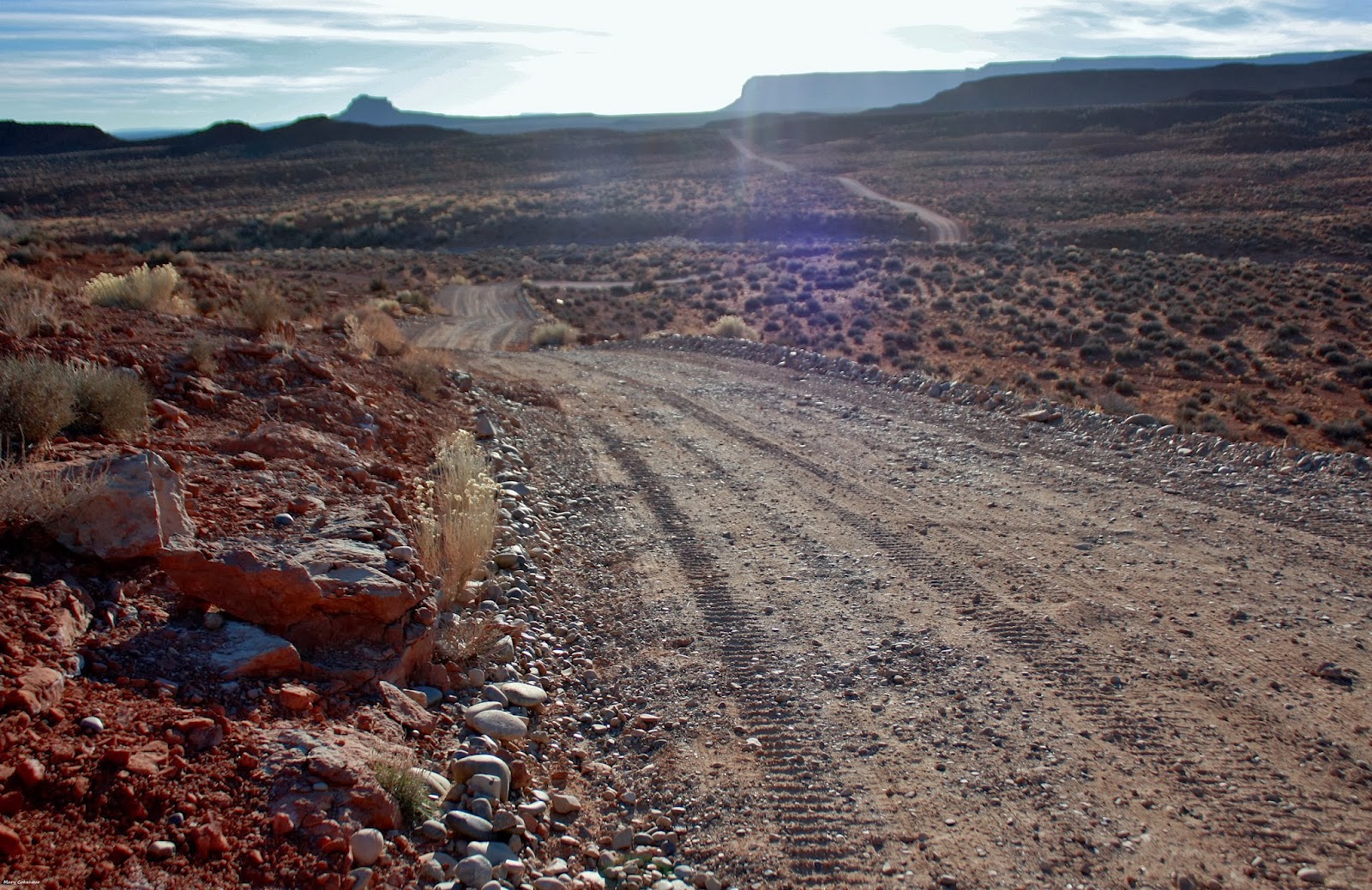 Sacred to the Navajo, Valley of the Gods is not a state, county or tribal park; it is private land that is managed by the BLM.  The main road is bumpy and loaded with steep, though small, hills that make you feel like you are on a miniature rollercoaster ride. High clearance 4-wheel drive vehicles are your best bet; cars can make it so long as they drive very, very slowly; personally though, I wouldn't recommend doing the loop in a car.  The 1984-1987 CBS show Airwolf used a mesa in the Valley as the secret hiding place of the super helicopter which was often seen flying through the area.  Two episodes of the BBC science fiction TV show Doctor Who were filmed here: "The Impossible Astronaut" and "Day of the Moon". 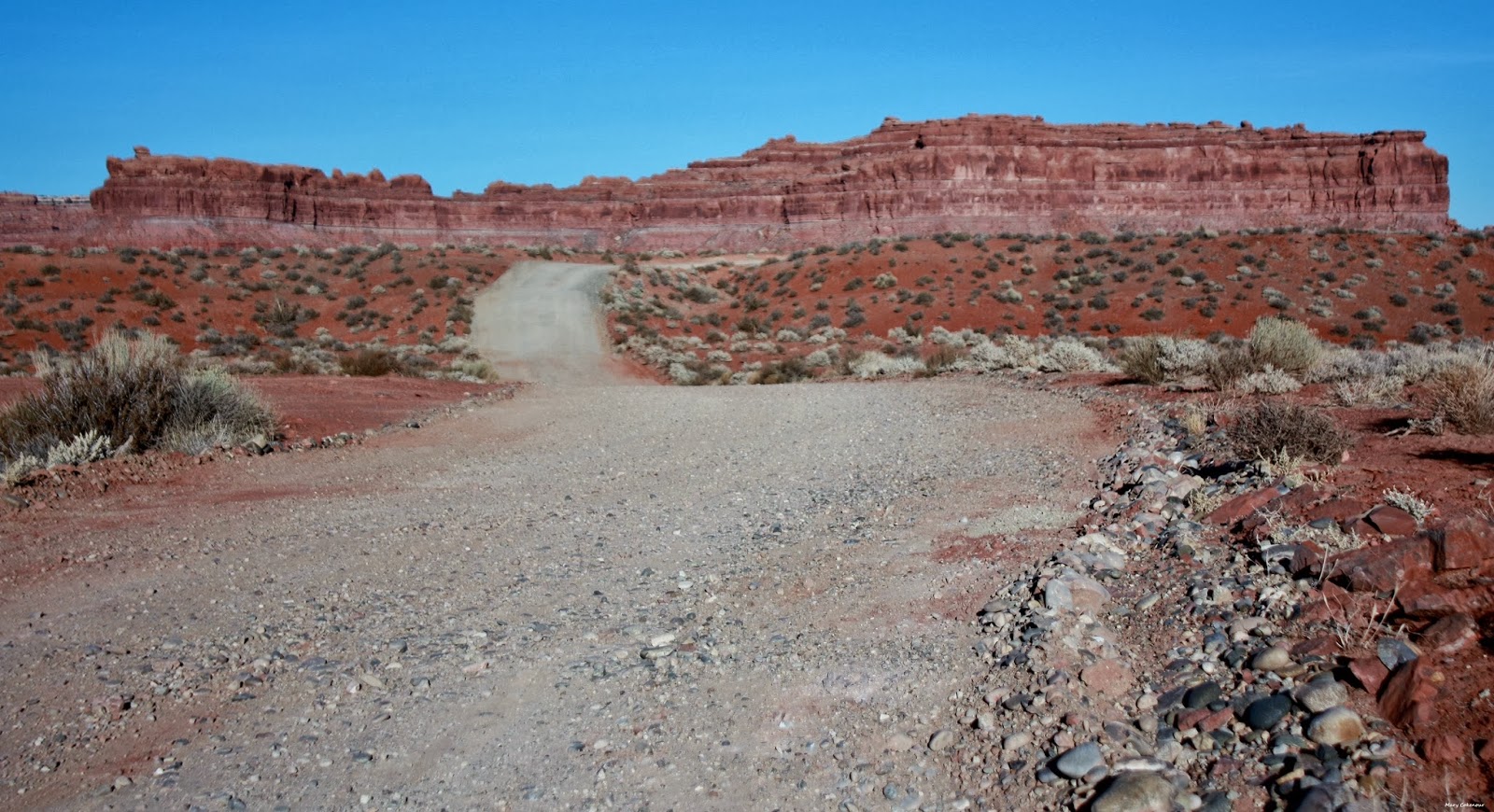 The large Mayan pyramid formation that was first seen from the Moki Dugway is "Bell Butte".

While many of the formations have distinctive names, finding information on them can be tedious and frustrating.  Why?  The same formation could be listed under different names; as you move around a formation, the appearance will change and writers often name objects as they picture them.  Take, for example, "Lady in the Bathtub" aka "Balanced Rock"; also notice how the play of light can change the color of the sandstone from a mild red to a sunburst of red. 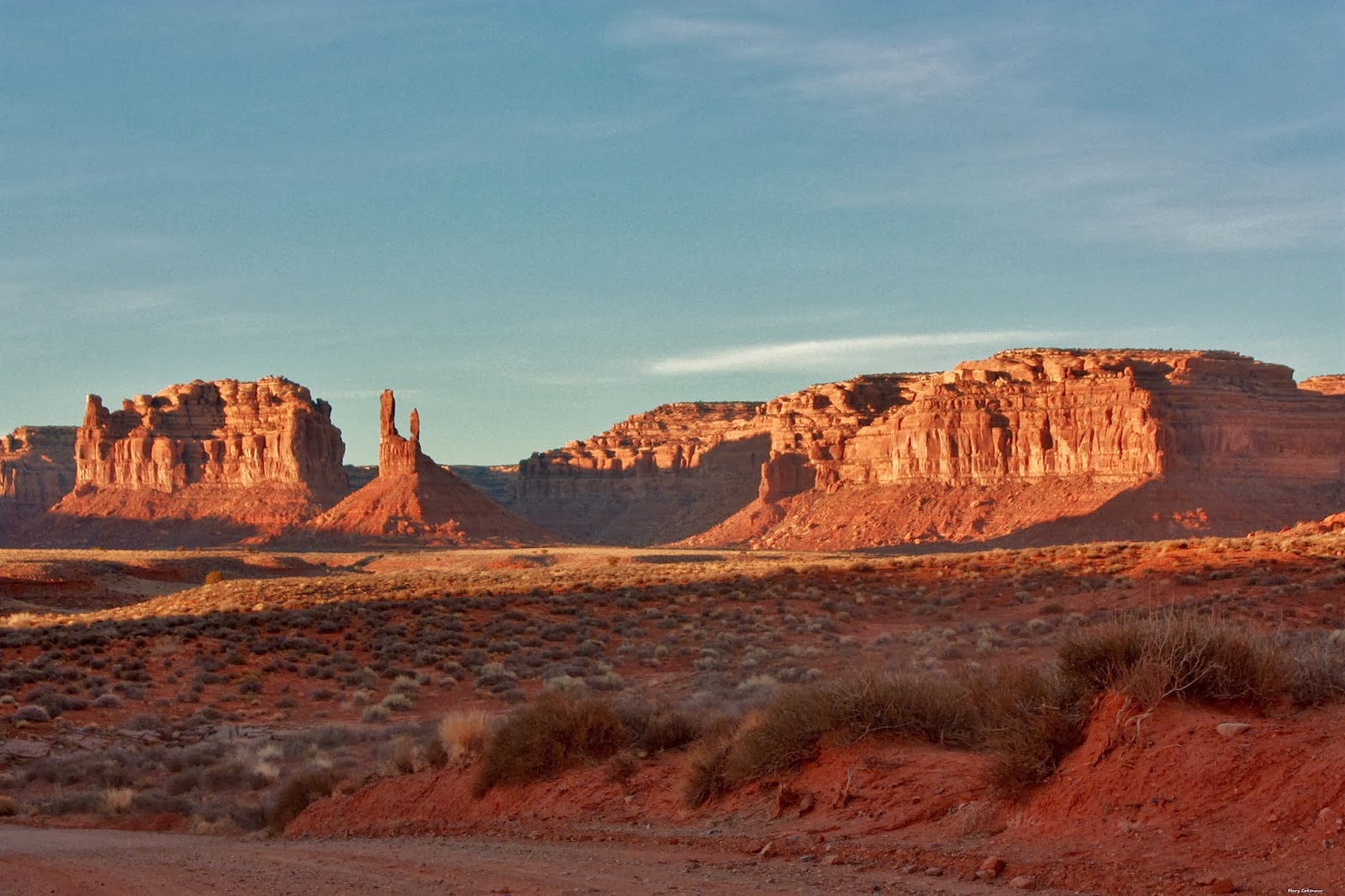 As you pass by the "Lady", Hidden Tower comes into view; a good name for it, since this massive formation cannot be seen from the Moki Dugway.  It looms up after passing by the "Lady" and Franklin Butte is next to Hidden Tower.

A set of formations seen from the Moki Dugway are Setting Hen Butte and Rooster Butte.  Rooster Butte was formerly known as "Petard Tower" on old 15-minute maps of the Cedar Mesa area; locals called it "Prairie Dog on a Mound".  Back in the 1970s, climber George Hurley spent time in the Valley climbing the formations; his exploits were written about by Eric Bjornstad in his book, "Rock Climbing Desert Rock IV: The Colorado Plateau Backcountry: Utah" published in 2003. 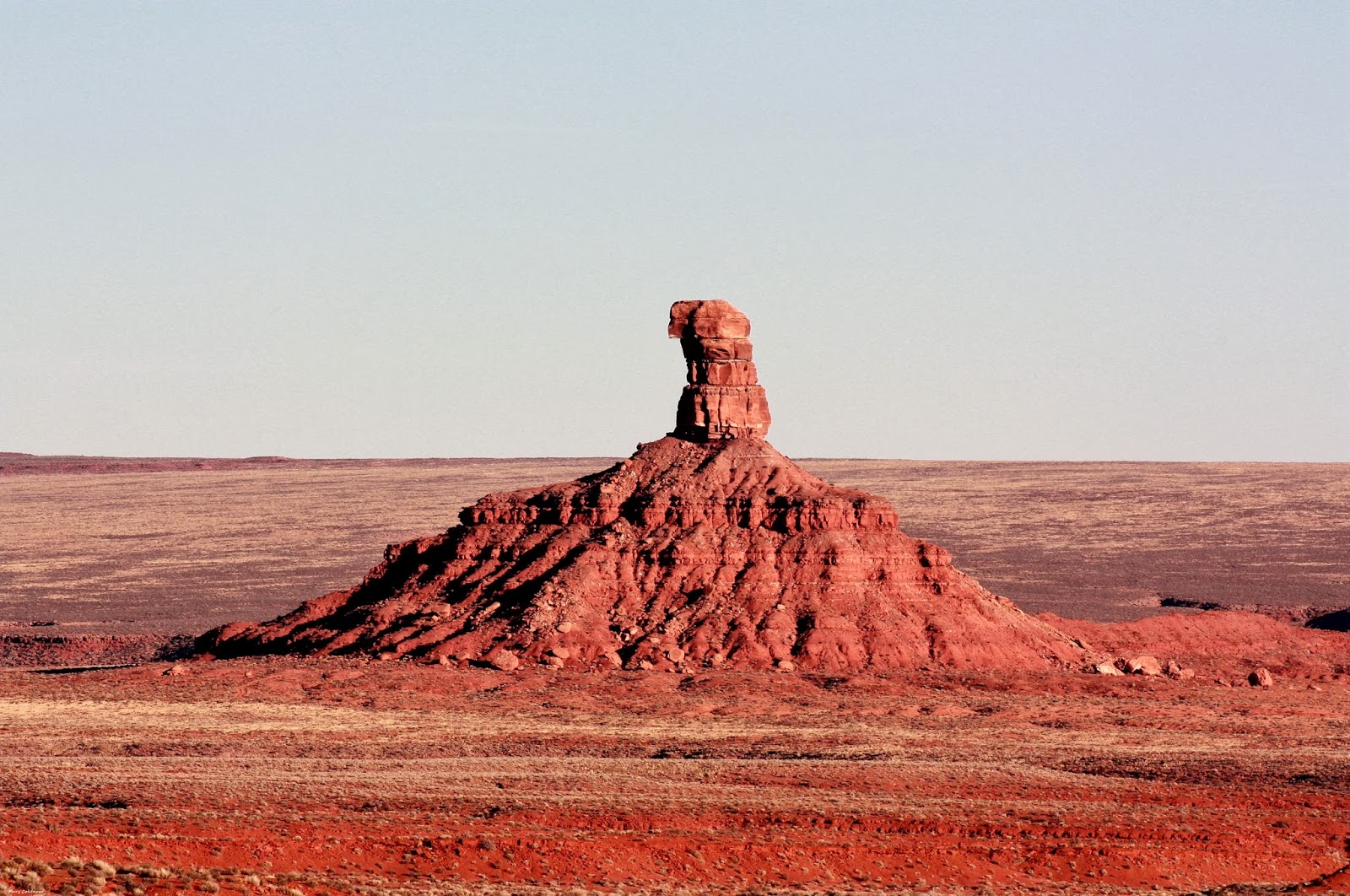 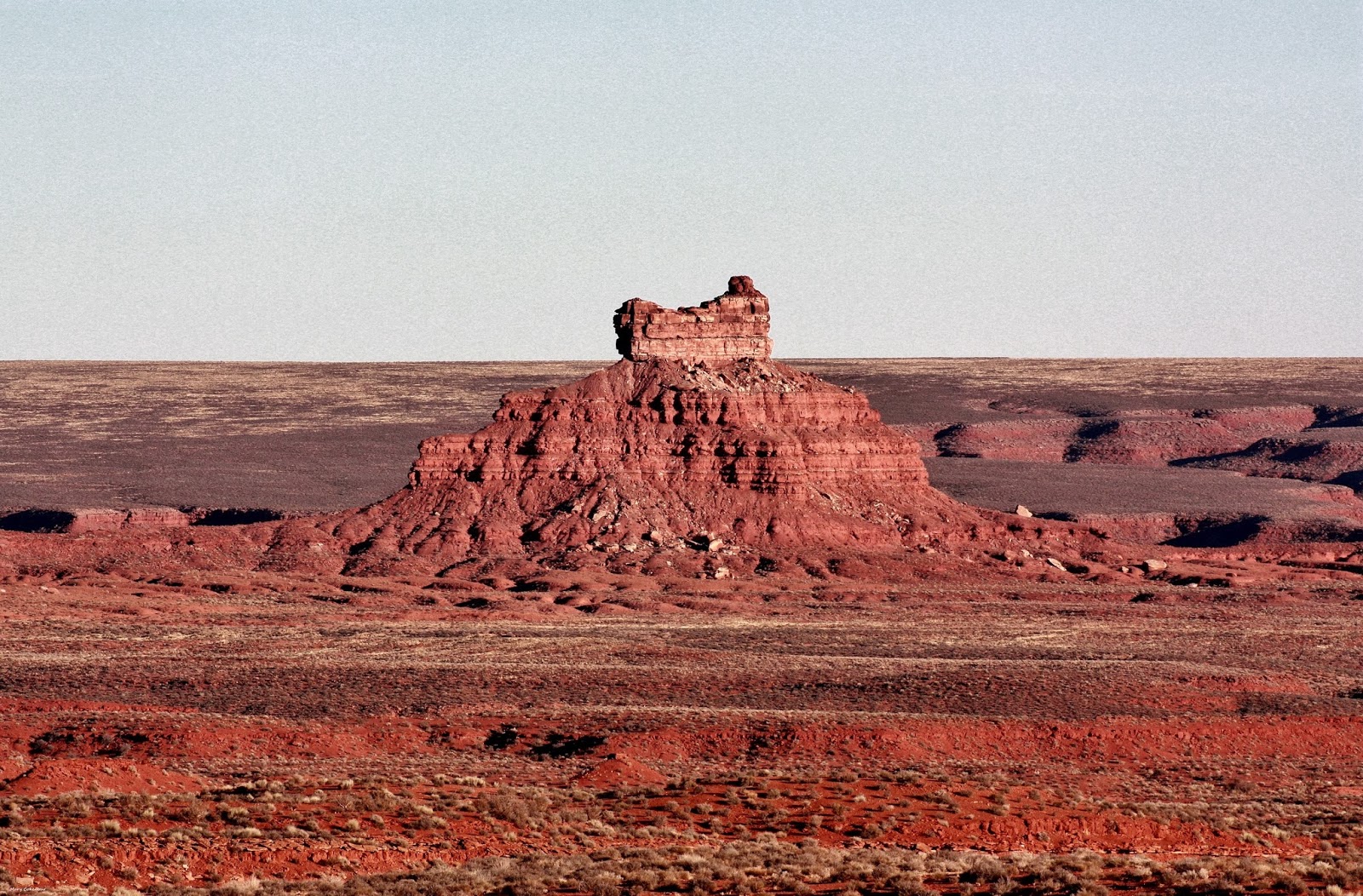 This is where I'll be stopping part one of our adventure into Valley of the Gods.  A total of 164 photos had been taken which I finally thinned down to 50 photos (49 pictures plus the map) and there was no way I was going to put it all into one gigantic write up.  Hope I have whetted your appetite and look for part two on Valley of the Gods.
Mary Cokenour
﻿
Posted by Mary Cokenour at 10:54 AM