The Valley of the Gods - Part Two 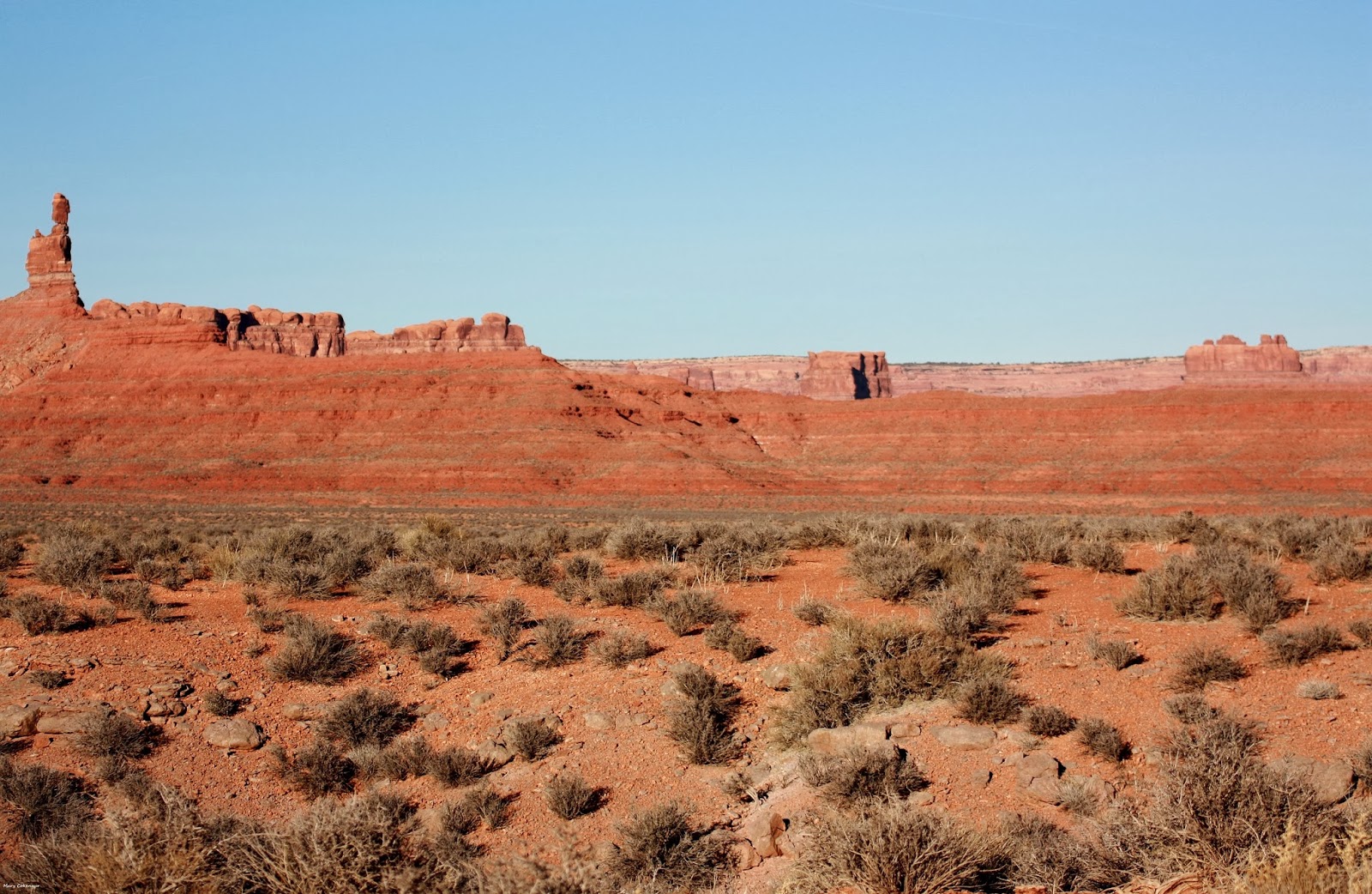 Now to continue our journey through the Valley of the Gods; much, much more than the six formations mentioned on most maps. How about we start off with a few scenic shots just to get the adrenaline pumping, shall we? 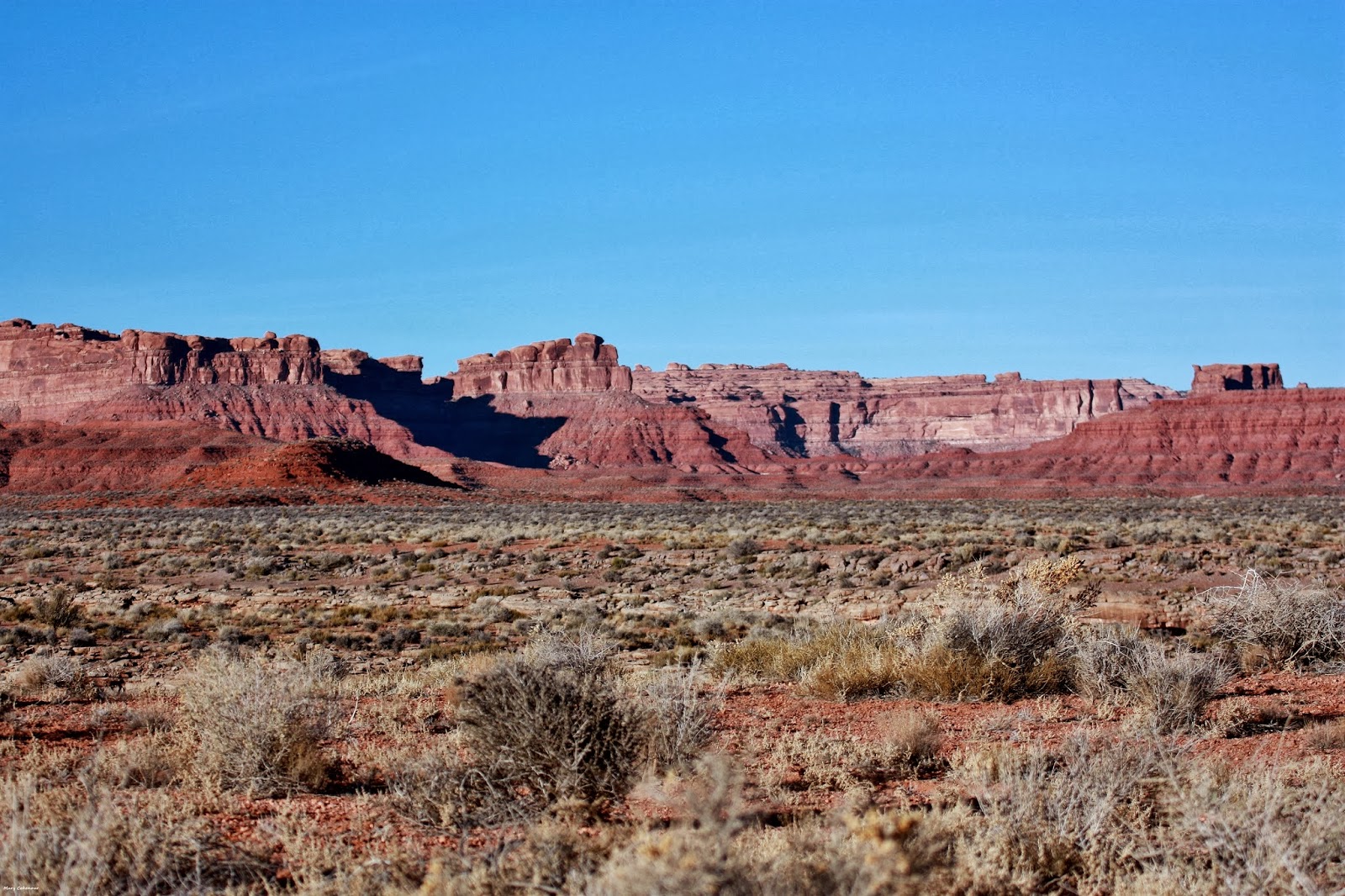 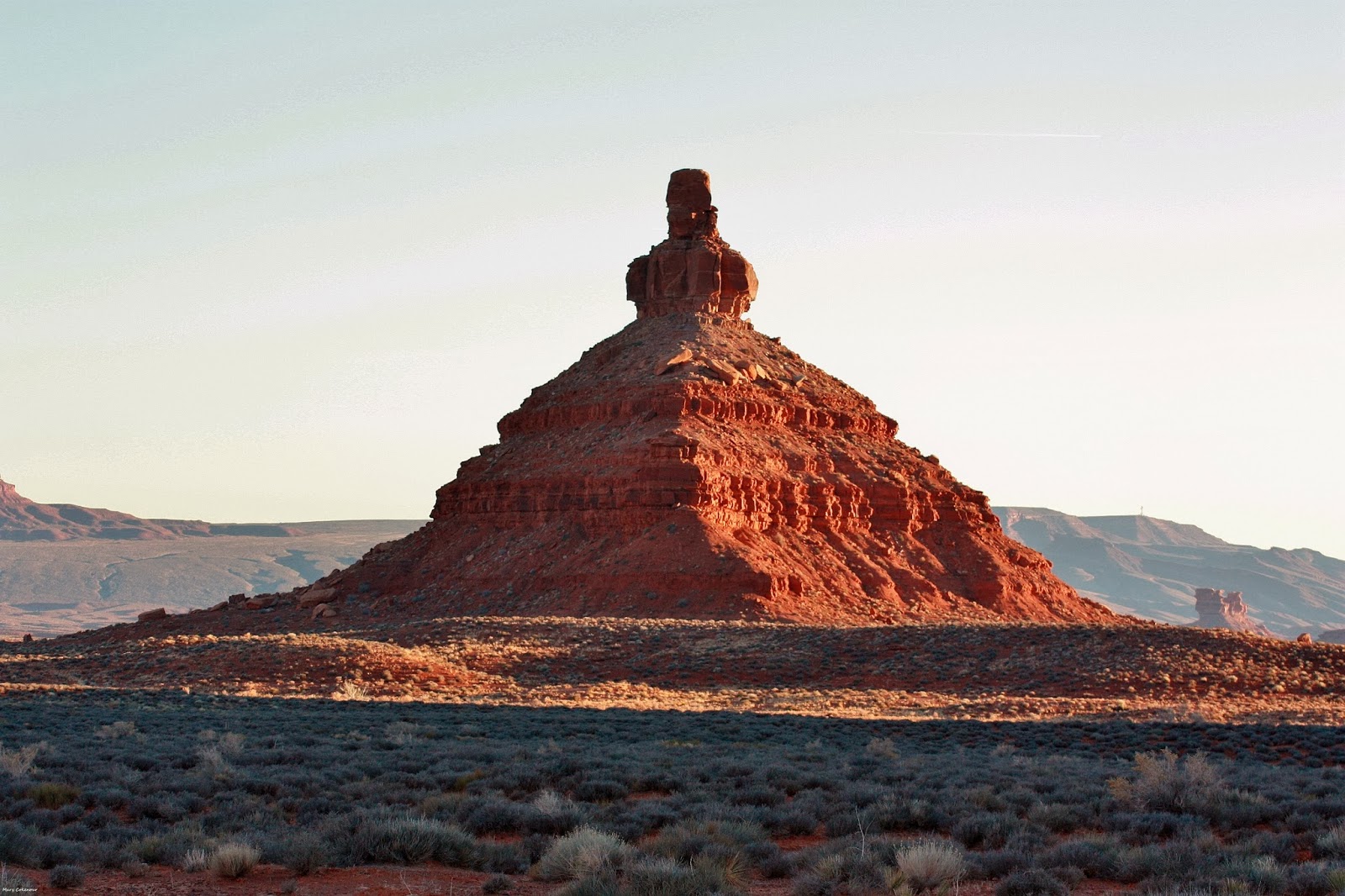 Awake now?  It took me a little bit to figure out why Battleship Rock was called that; just had to see it from the correct angle.  Otherwise it looks more like a rooster than Rooster Butte does; see what I mean about the names of formations, depends on how you look at them.

The Hand of Puttima, Putterman's Residence and McYetta's Loaf will be on the left hand side; I wish I could tell you who Putterman was, since the name is on a few formations.  By the way, if you have a panorama setting on your camera, you should be using it in the Valley. 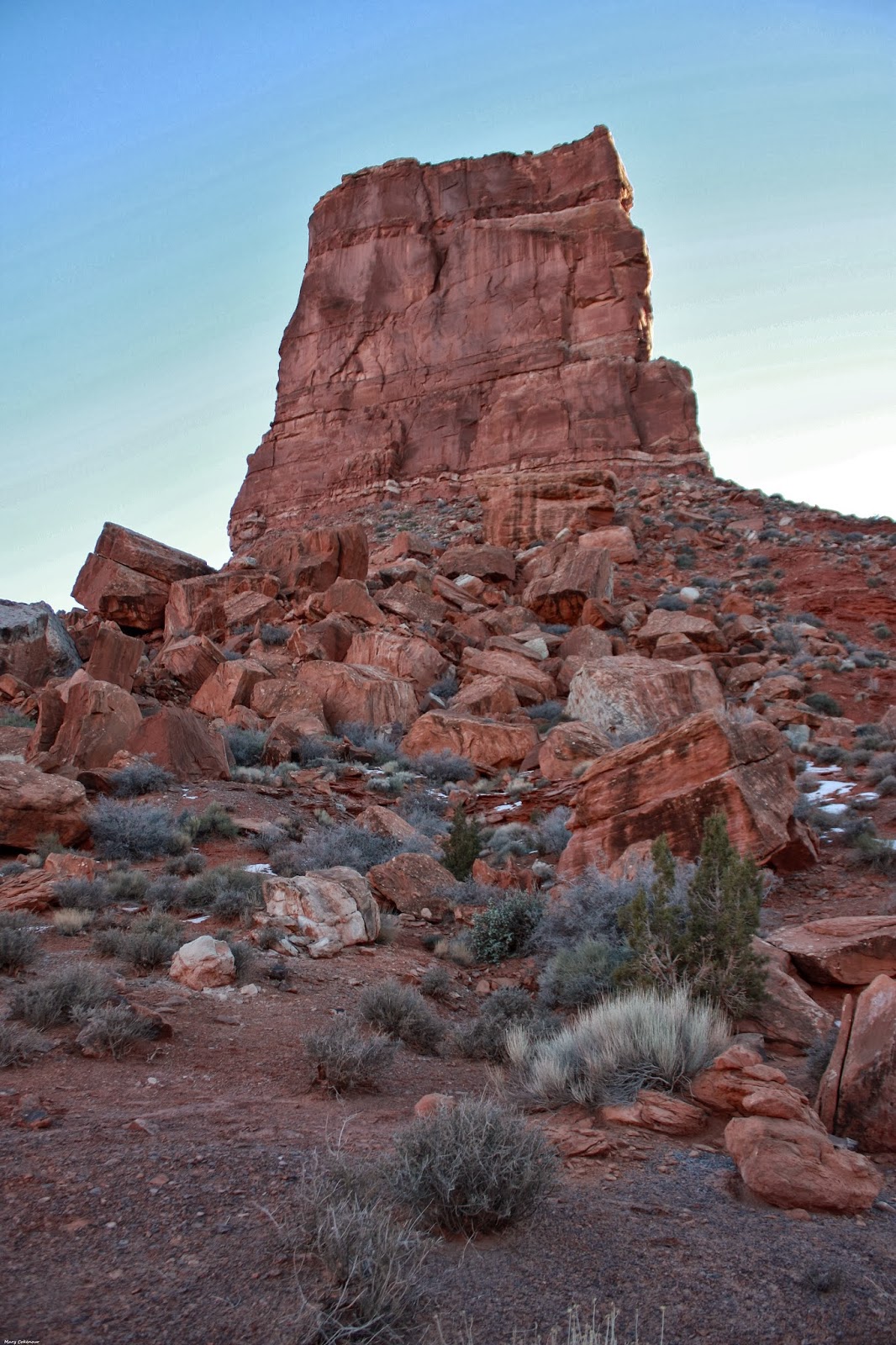 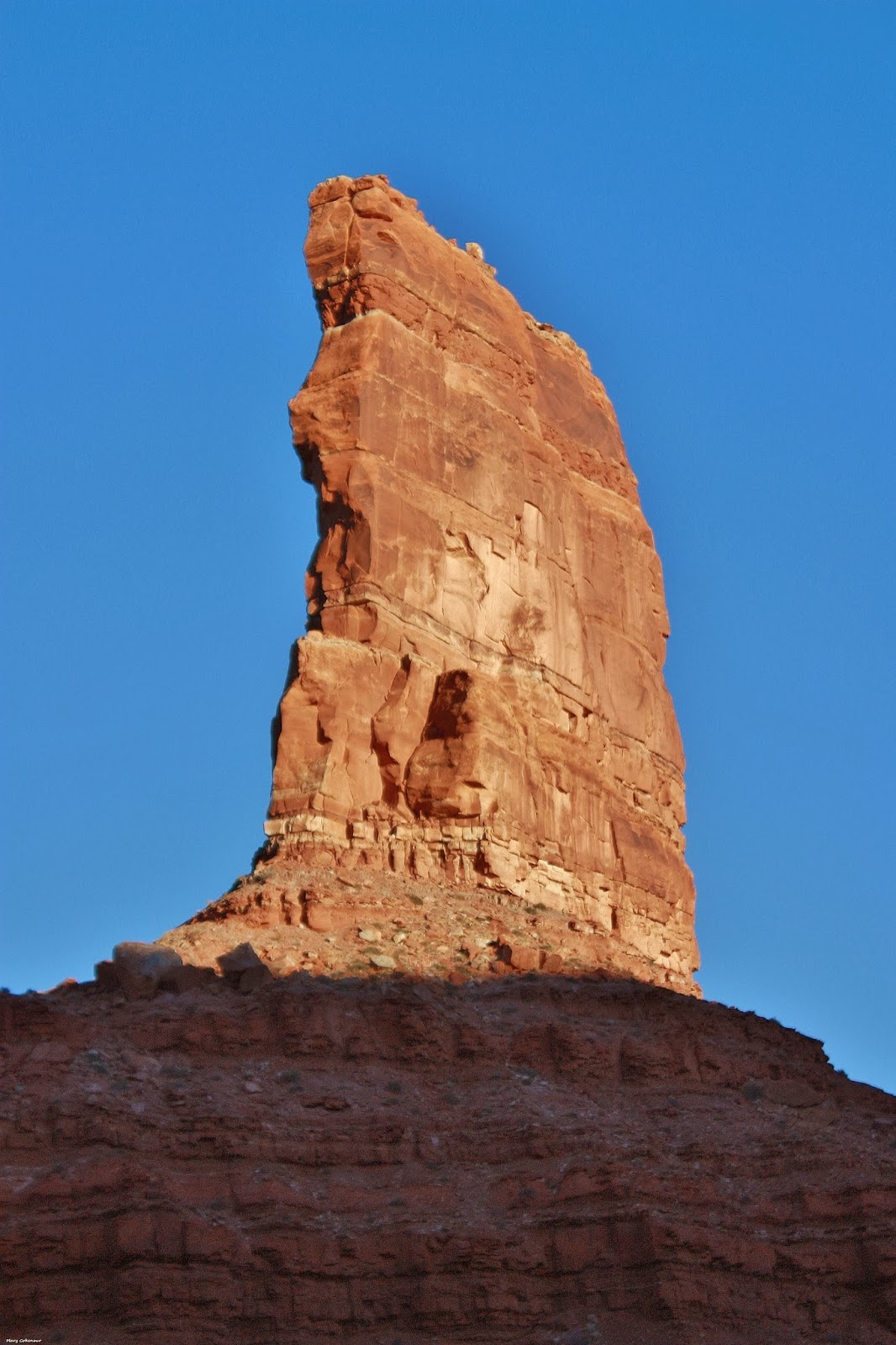 The road will begin to curve to the right and Castle Rock aka Eagle Plume will come more into sight; this is another of those formations that changes shape as you go around it.  While on two sides it will look like a giant square wall of stone, the edge gives the illusion of a sheer pinnacle. 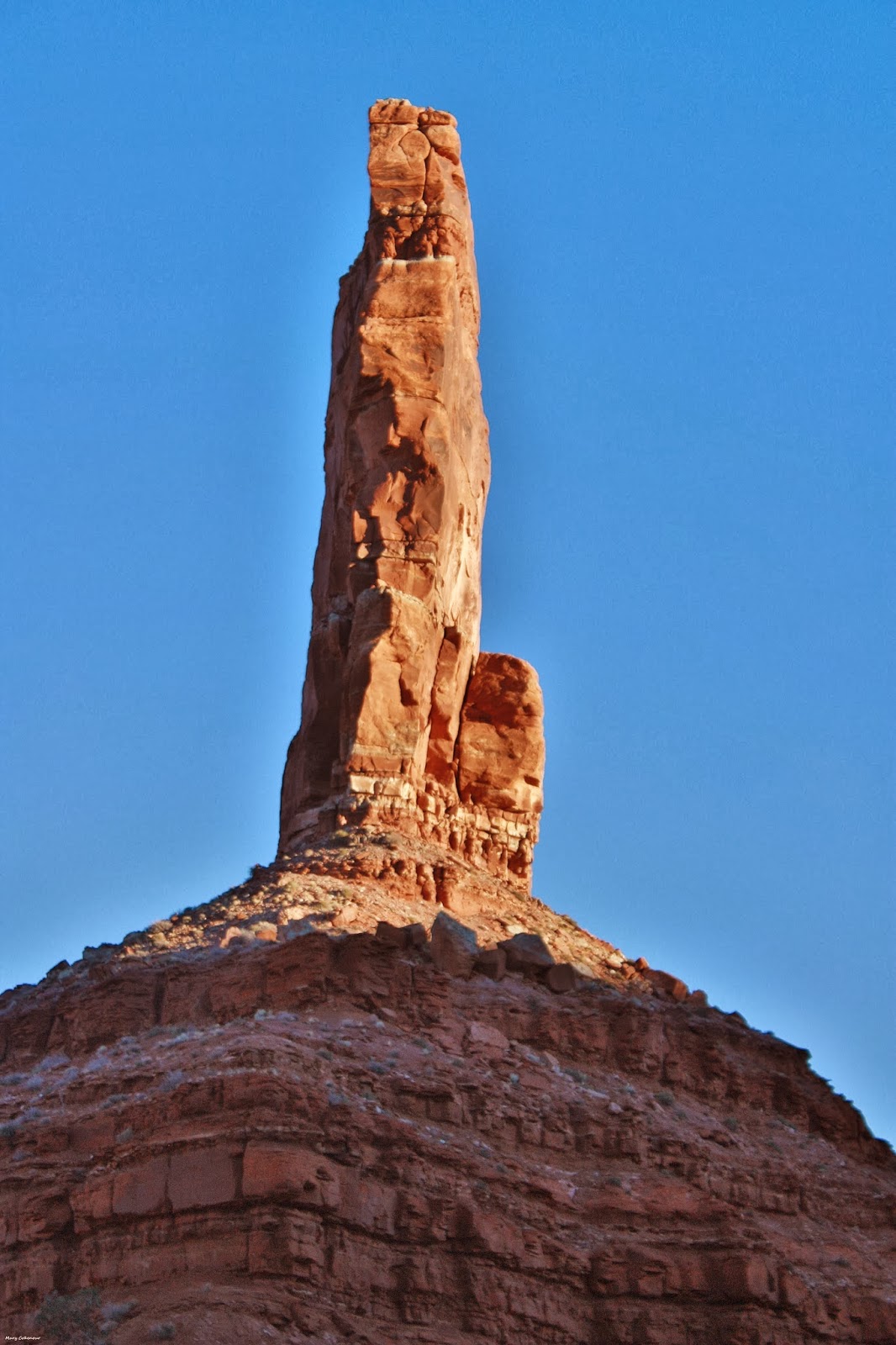 Have that panorama setting ready?  As you go past Hand of Puttima and Putterman's Residence, you will suddenly see...

Putterman in the Bathtub looks like a pair of rabbit ears as you approach it; it is also known as Rudolph and Santa Claus. 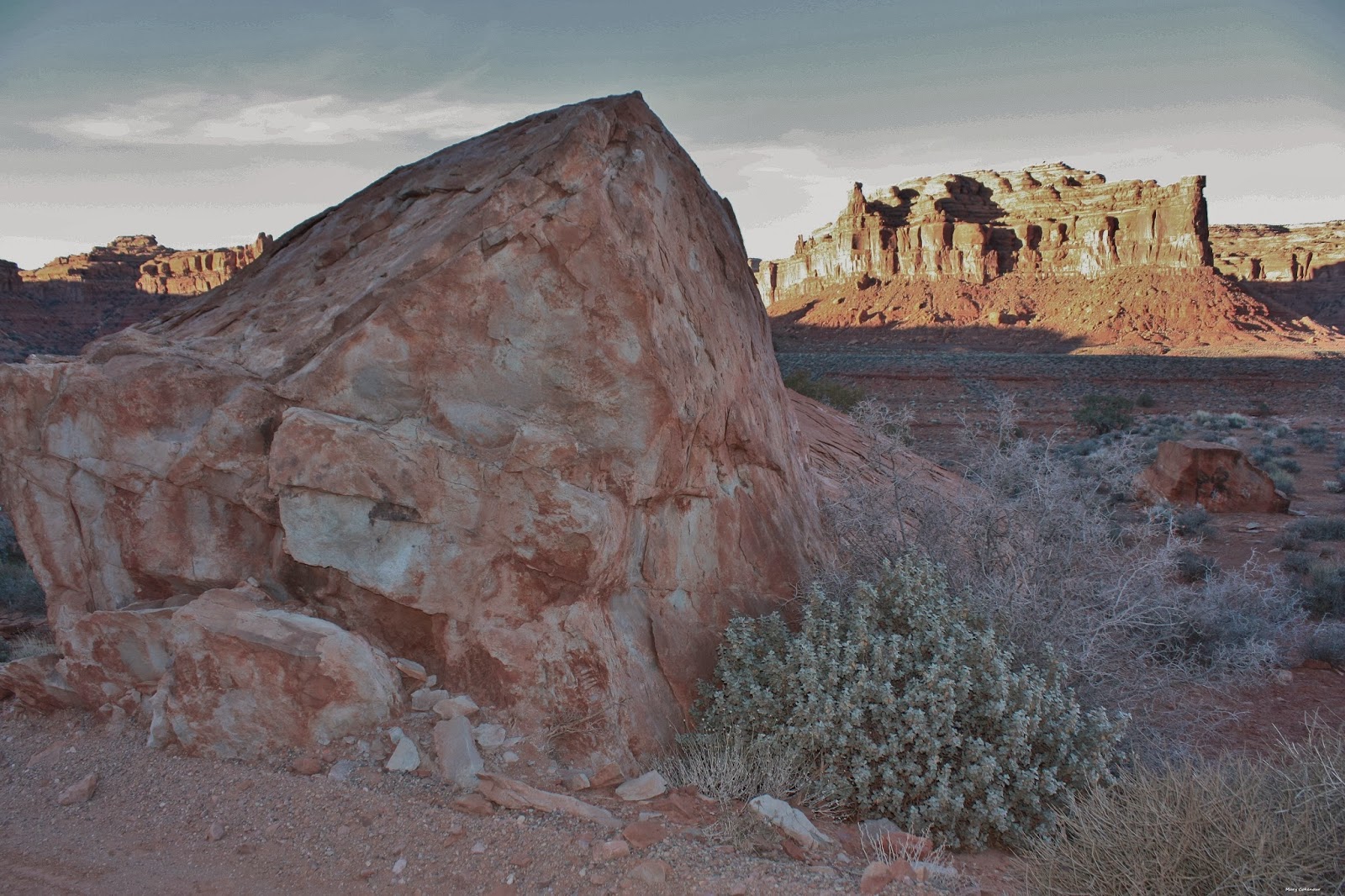 But wait, there's more; as you get to the pinnacle side of Castle Rock, stop and look out to the left.  Well yes, that giant boulder is amazing, but keep looking beyond.  The formation in the front left has two sections to it; the "L" shaped part is called the Tommyknocker, while the remaining larger section is Tom-Tom Tower.

By now you're chomping at the bit to see what is around the next corner, and the next; keep on driving, but make sure you pay attention to the road. 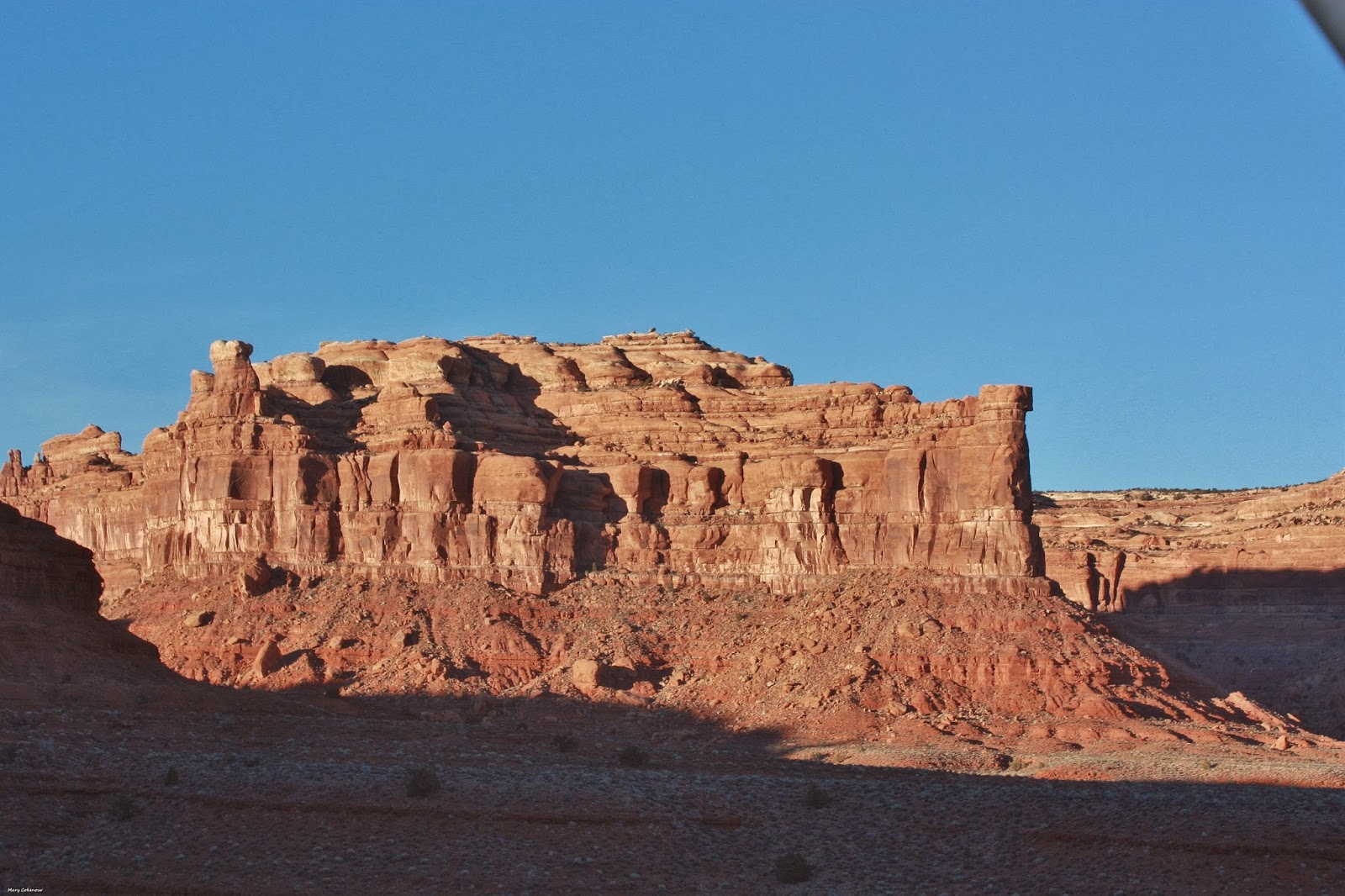 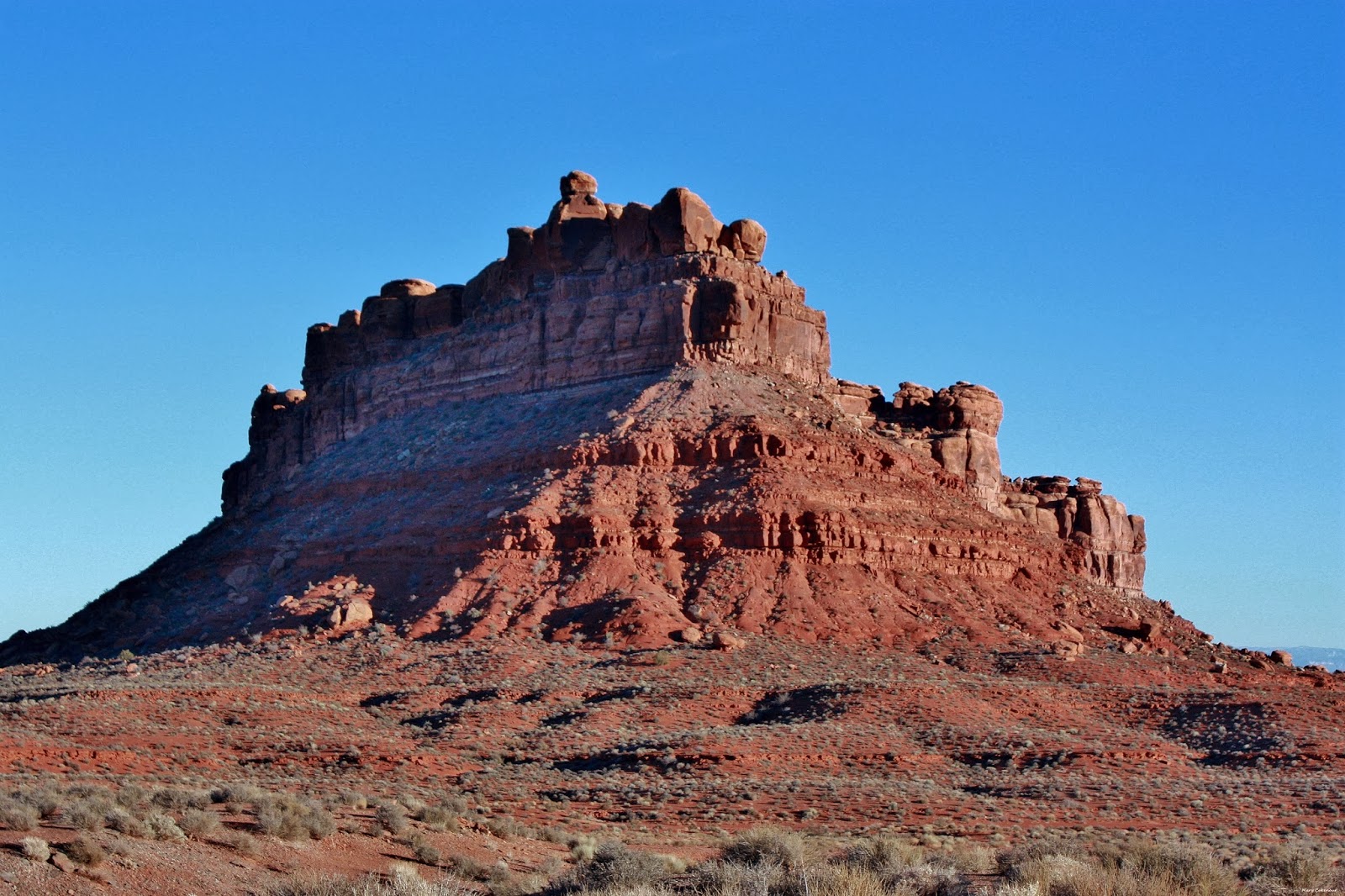 Believe it or not, but pretty soon you'll be coming out onto Route 163; make a right towards Mexican Hat and Monument Valley; make a left and head on up to Bluff.  Don't be sad, I've got a few more photos to end your read with a smile. 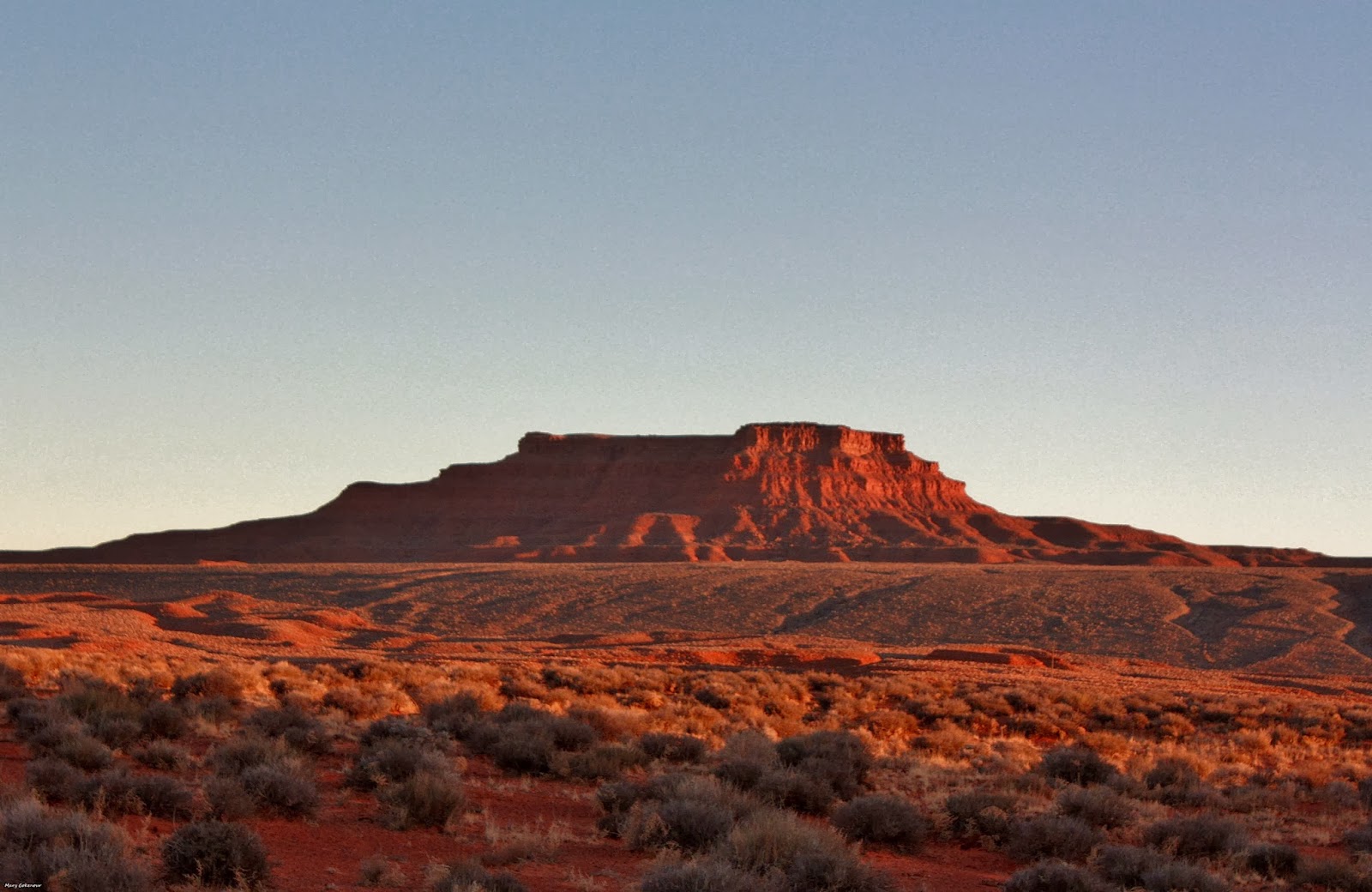 ﻿﻿
﻿﻿﻿﻿
As you head on out, don't forget to wave goodbye to the Seven Sailors aka Seven Drunkard Sailors; happiest crew of gents you're sure to meet in the Valley.﻿
﻿﻿﻿﻿
We were lucky enough to be leaving as sunset began; being January, the Wolf Moon glowed in our pink sky; a much deserved dinner out on our minds.
﻿﻿﻿﻿
Wherever you go in the Four Corners area; slow down, take a deep breath and be prepared to enjoy!
Mary Cokenour﻿﻿﻿﻿﻿﻿﻿﻿
﻿﻿
Posted by Mary Cokenour at 4:44 AM