Riding by Old Mines into the Mountains of La Plata Canyon.

The La Plata (meaning "silver" in Spanish) Canyon is located between the Animas Valley/Durango to the east and Mancos to the west in Southwestern Colorado; the closest town being Hesperus. Simply go east of Hesperus towards the Hesperus Ski Lift on Route 160, then turn north onto Route 124 (The Kennebec Cafe will be the corner property). This road is paved for about the first ten miles; you'll be passing by many ranches and lovely homes, but the scenery behind them is the best of the viewing. 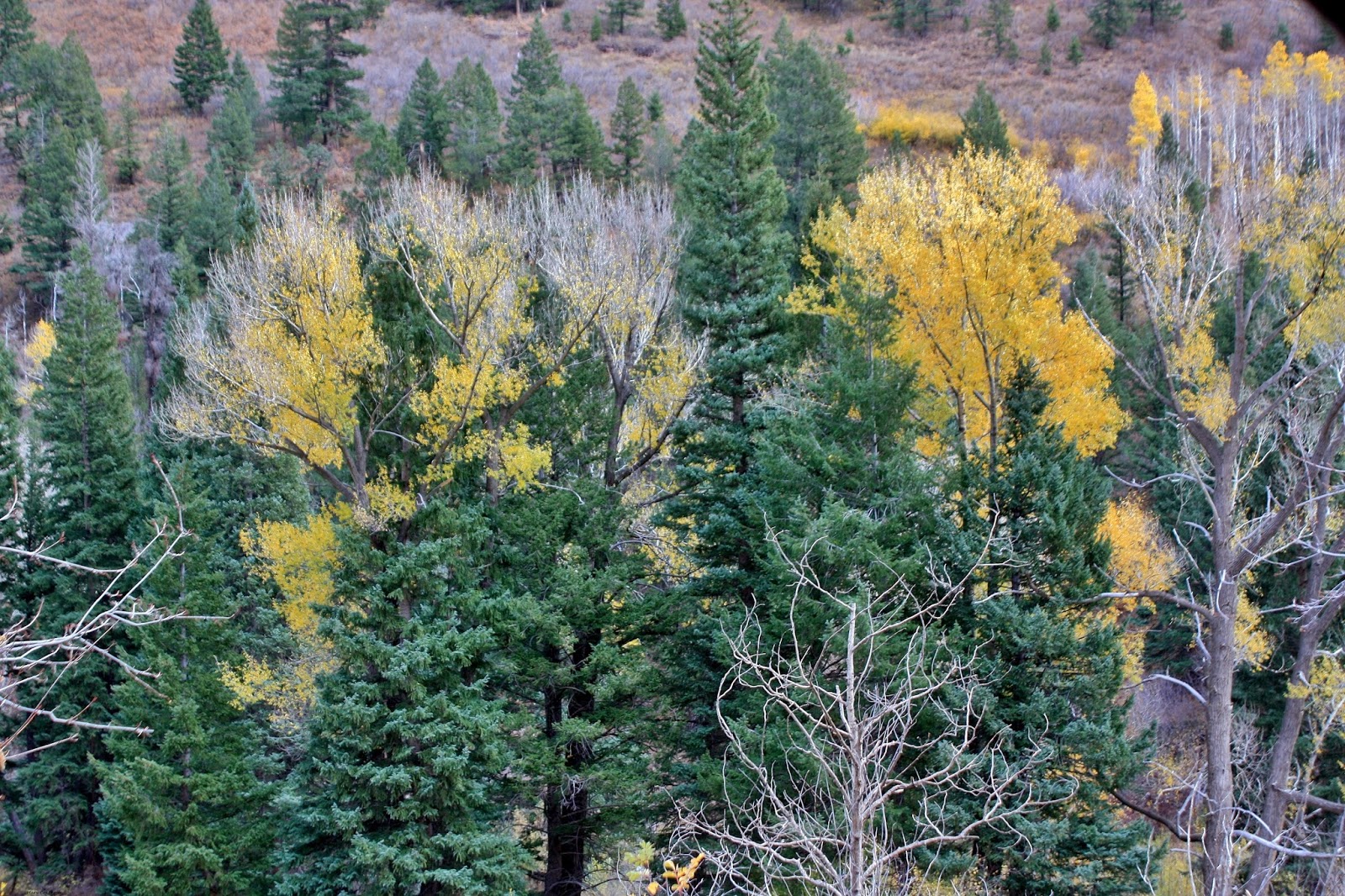 As you enter the forest, there will be a home tucked into the trees here and there; but it is a lush forest area of Douglas Fir, Engelmann Spruce and Colorado Aspens. You will be following alongside the La Plata River, come across La Plata City which was an old mining town established in 1875, and also come across remnants of other old mining claims.  We were there in October, so were lucky to experience the changing of greenery into fall colors. 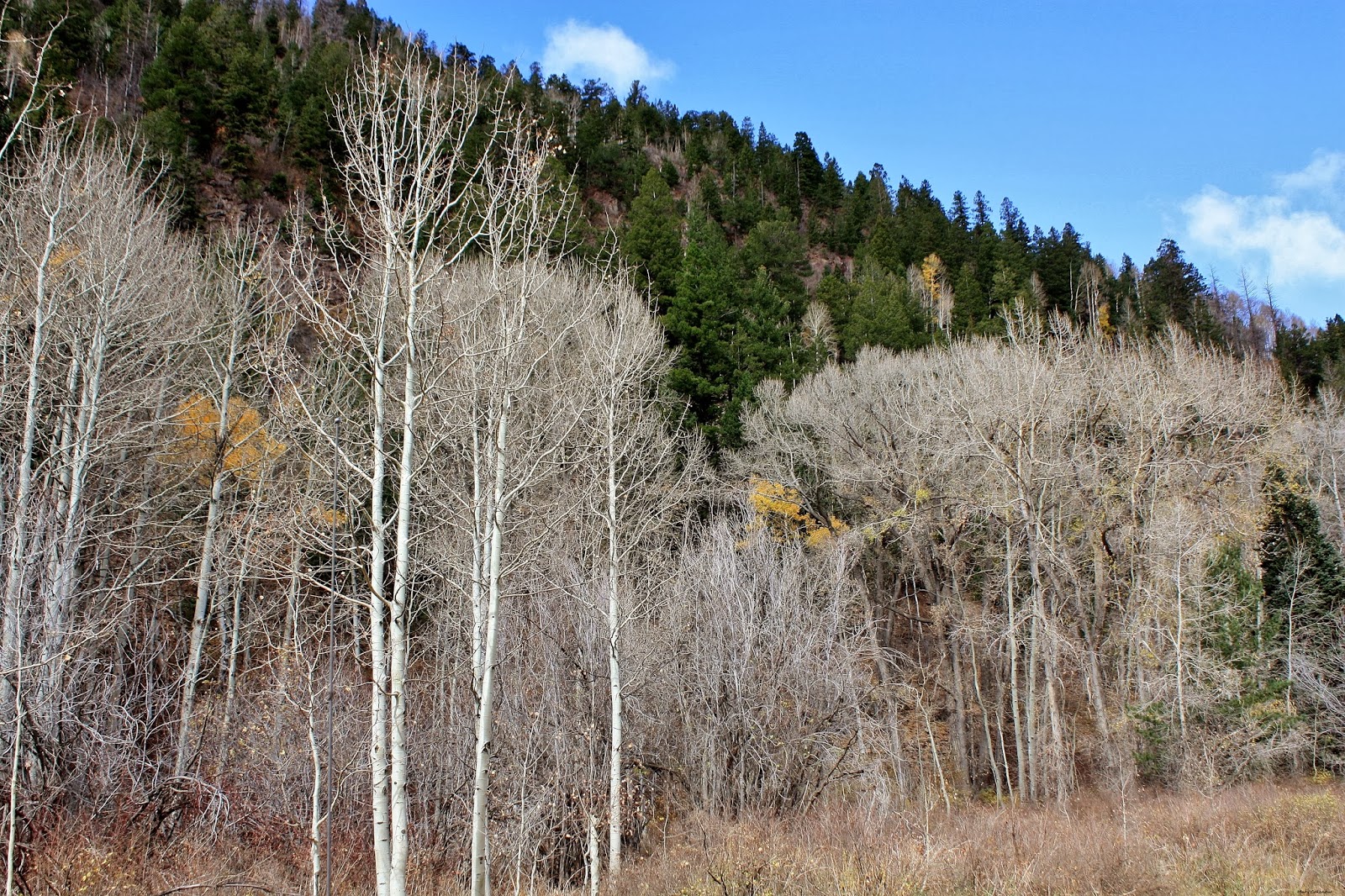 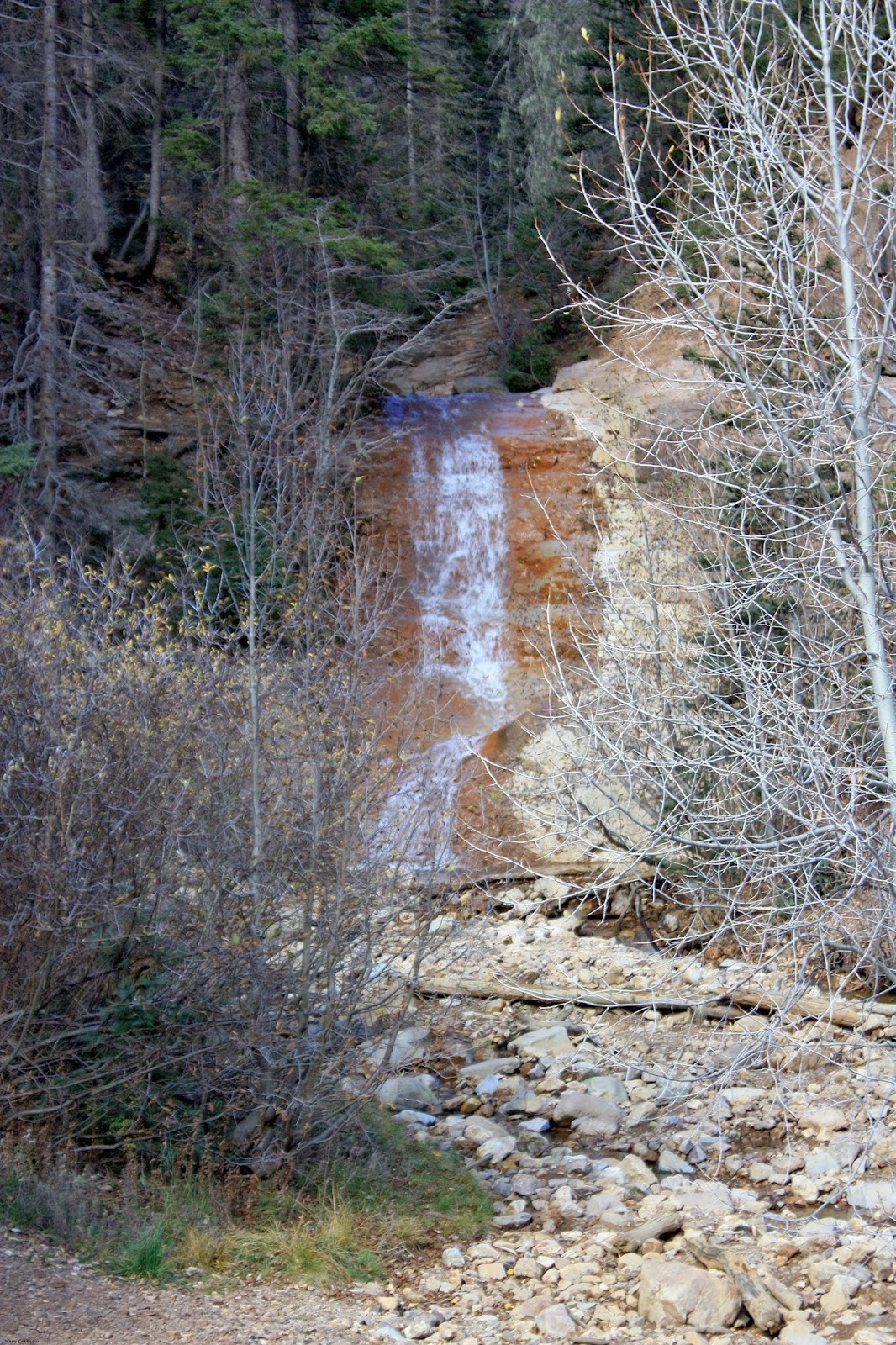 Along the way we saw a small waterfall on our left hand side, while on the right we were following parallel to an apparently dried out river bed.  I say "apparently" as we saw patches of water here and there, so once the snow thaws on the mountains in the spring, this river probably becomes quite active. 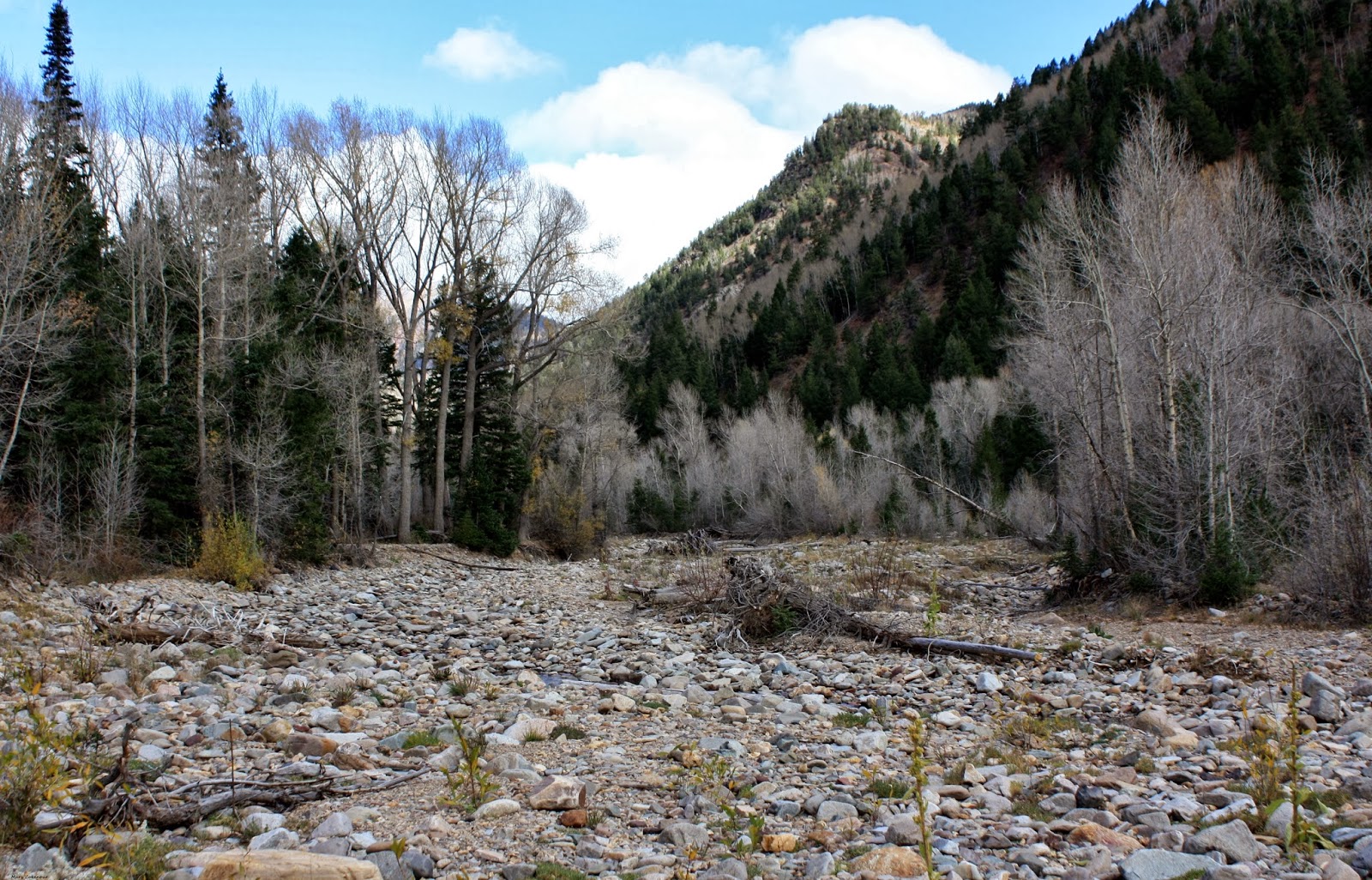 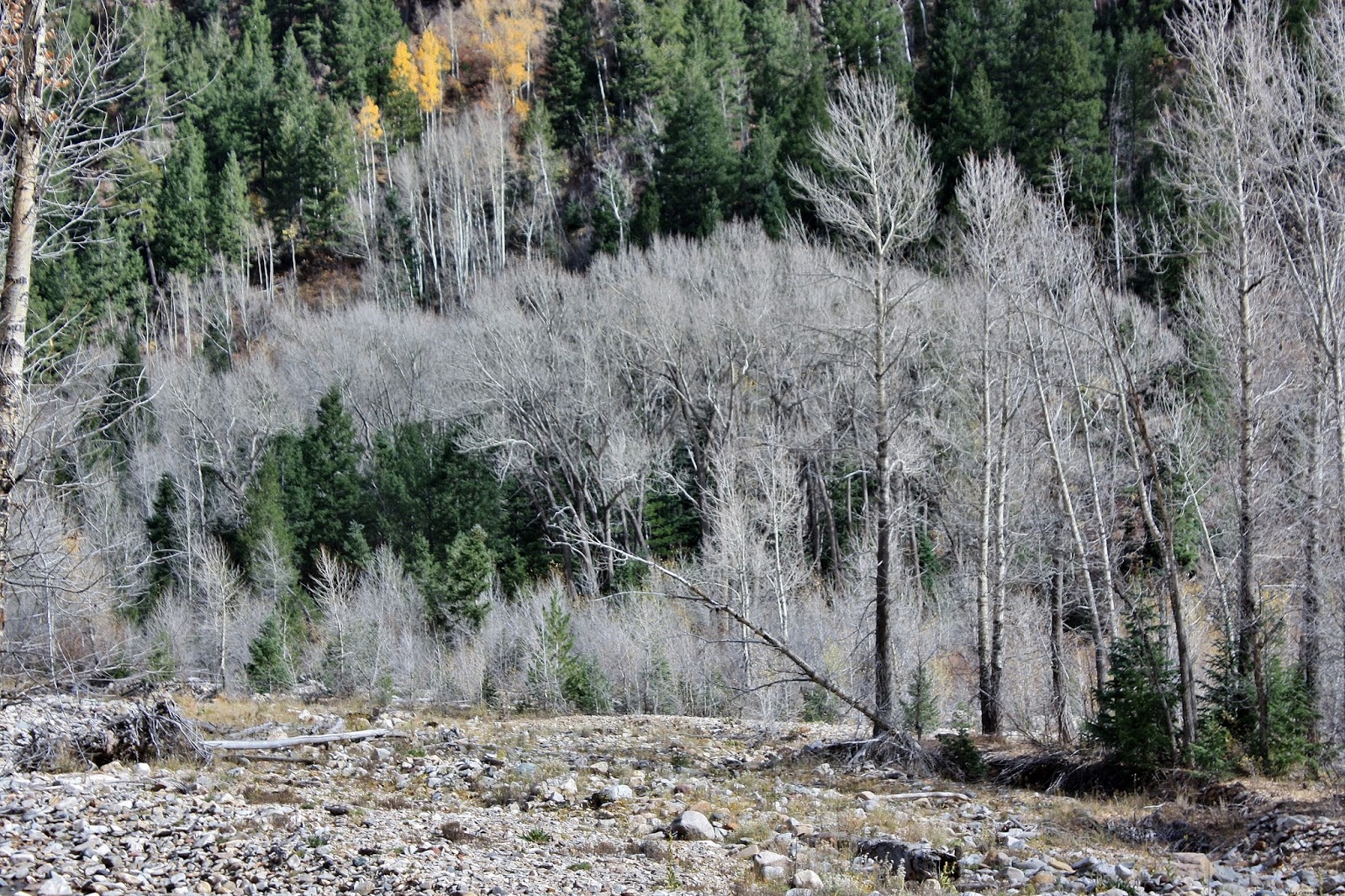 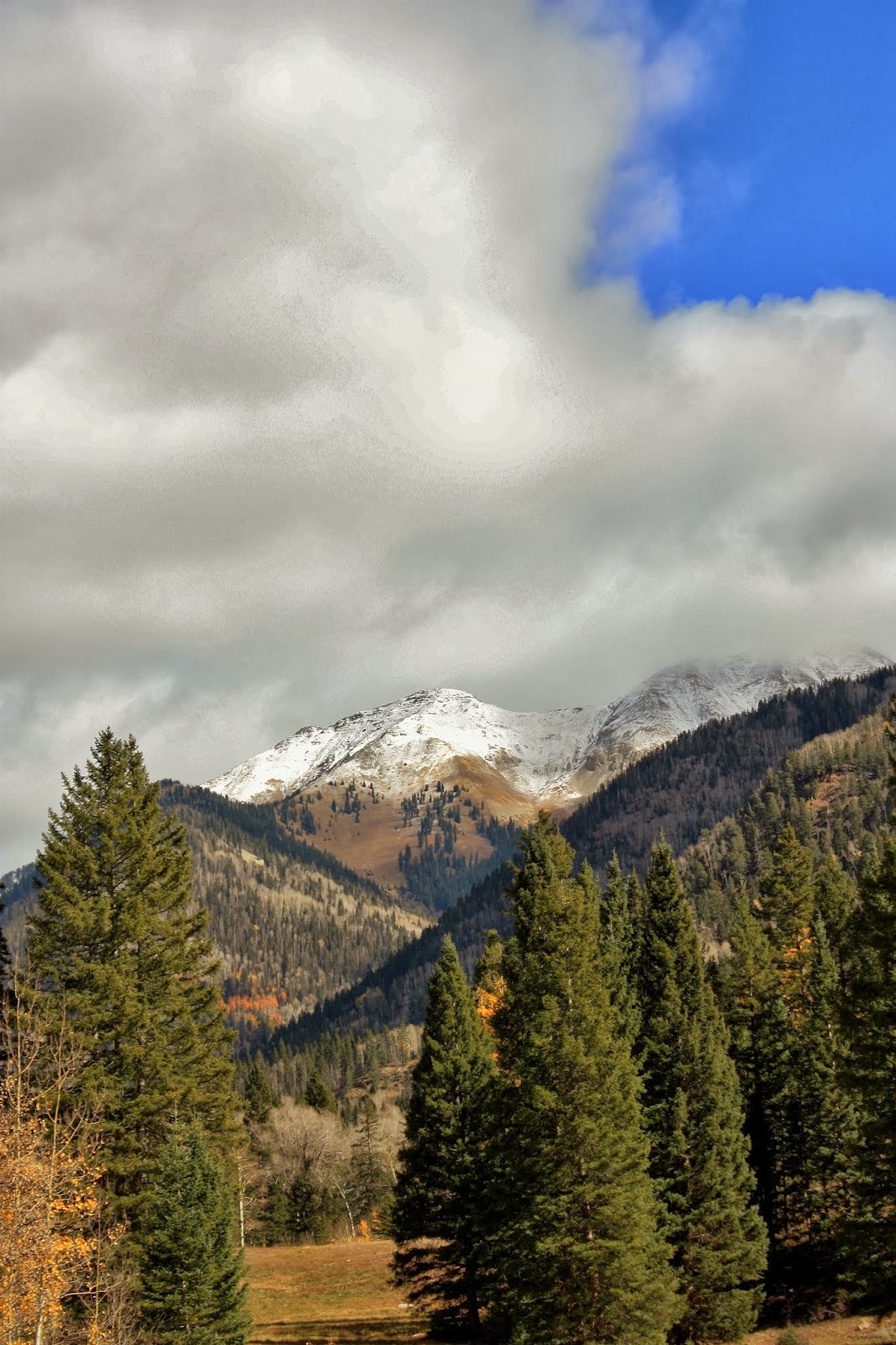 Traveling along, you might not notice that you're steadily climbing upwards; but you certainly will notice those beautifully majestic mountain peaks again...Burwell and Spiller Peaks.  Only October and already wearing thick cloaks of snow; the clouds creating crowns around the tops of the peaks. 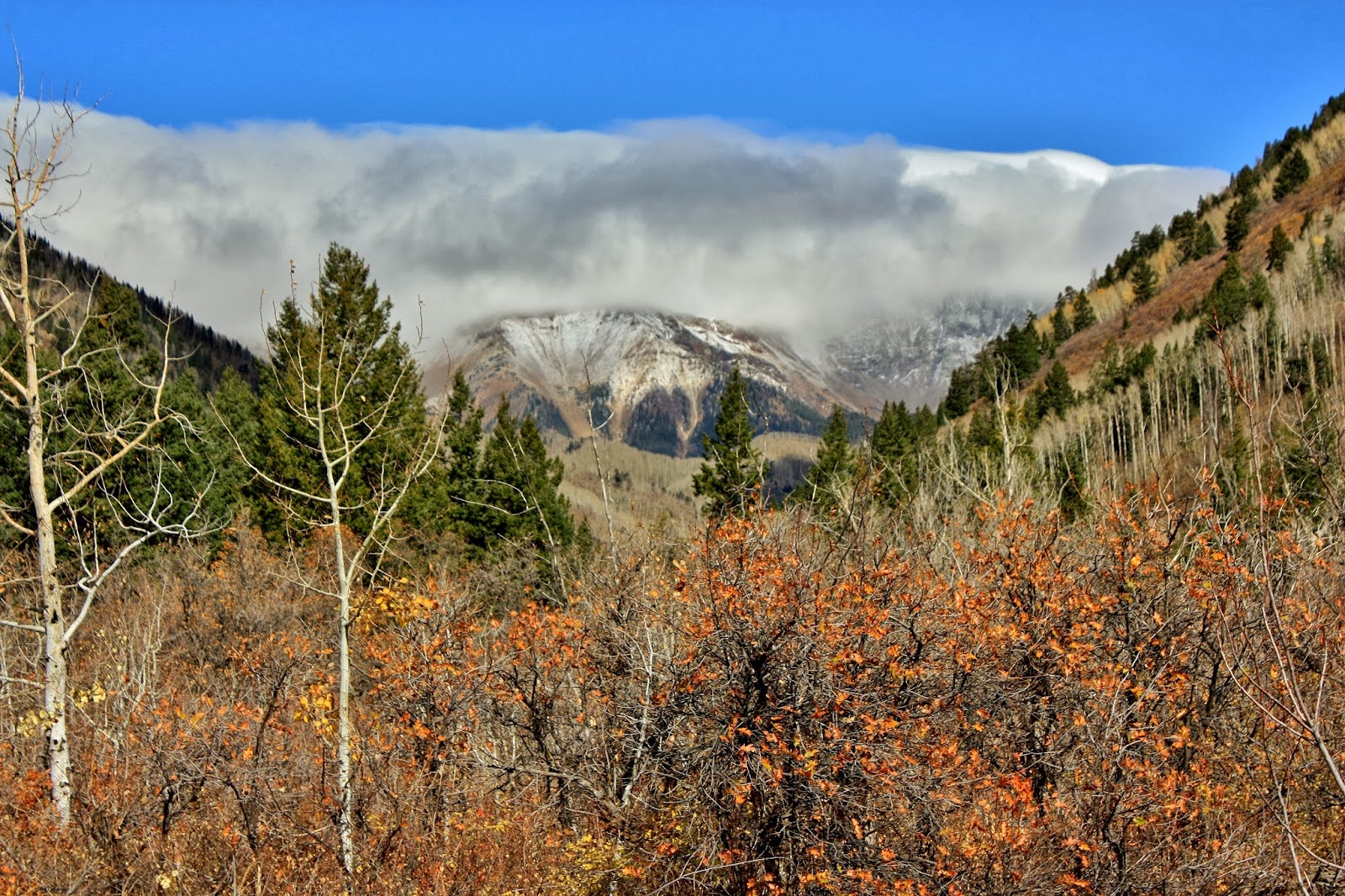 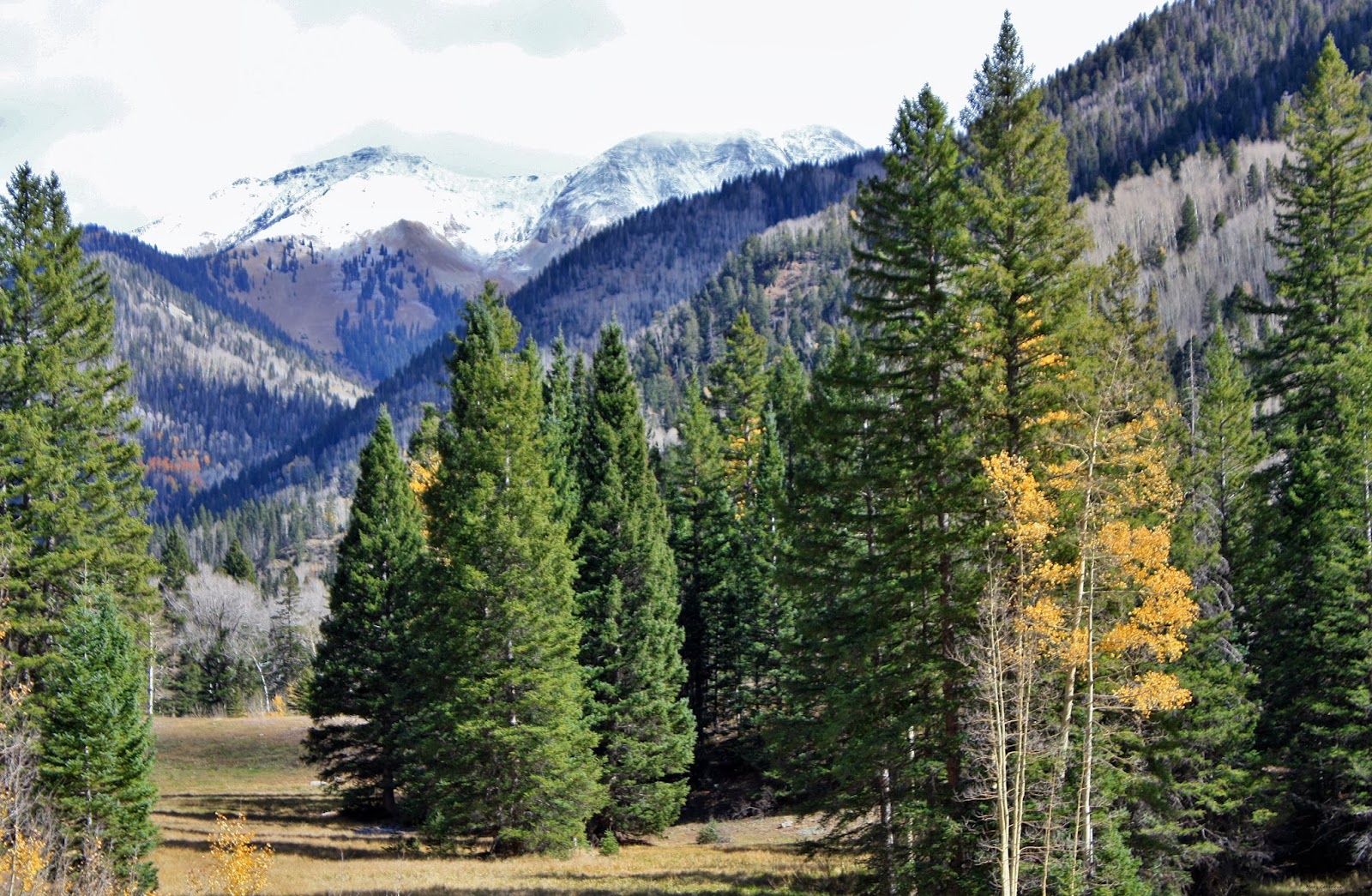 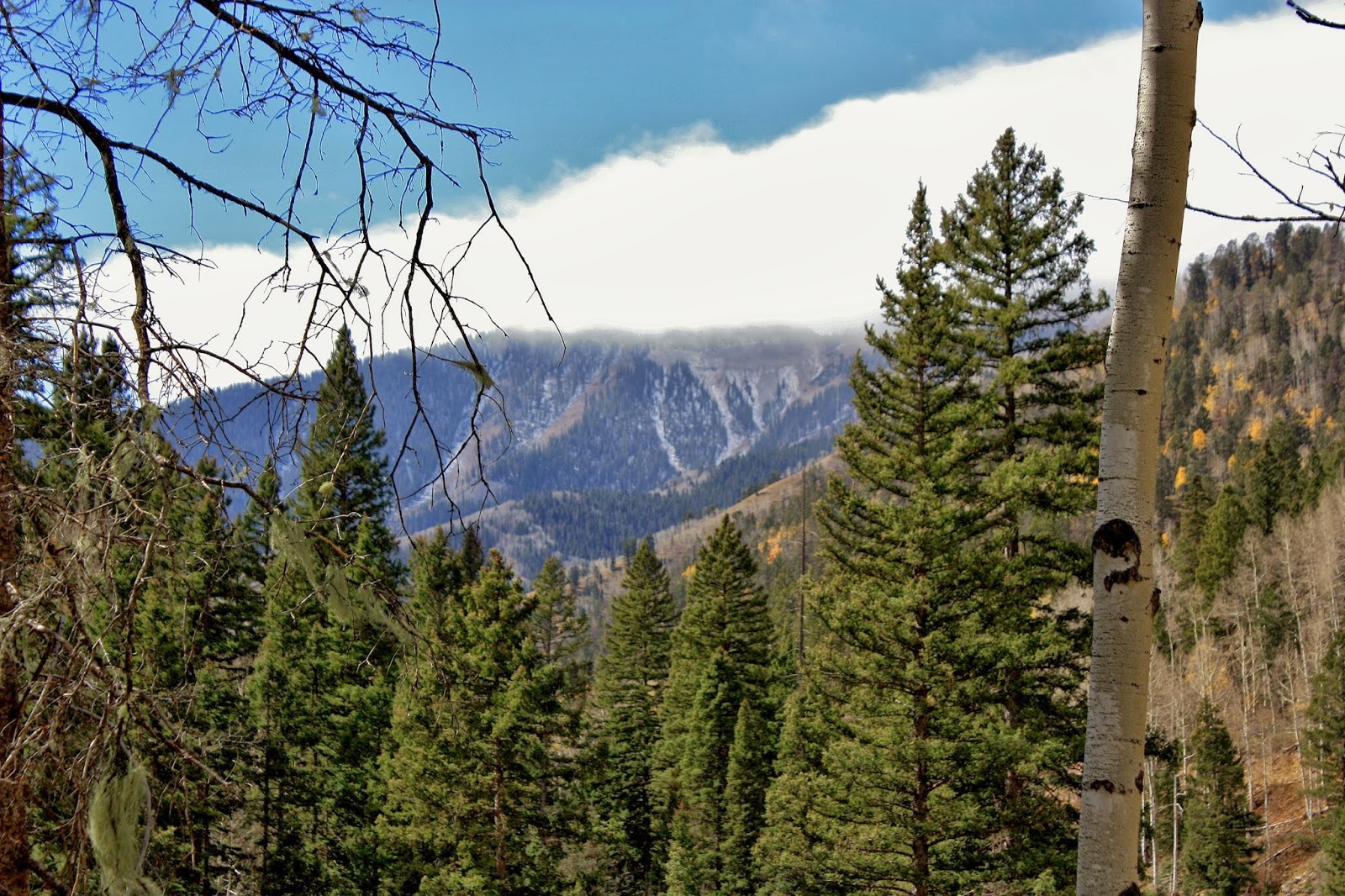 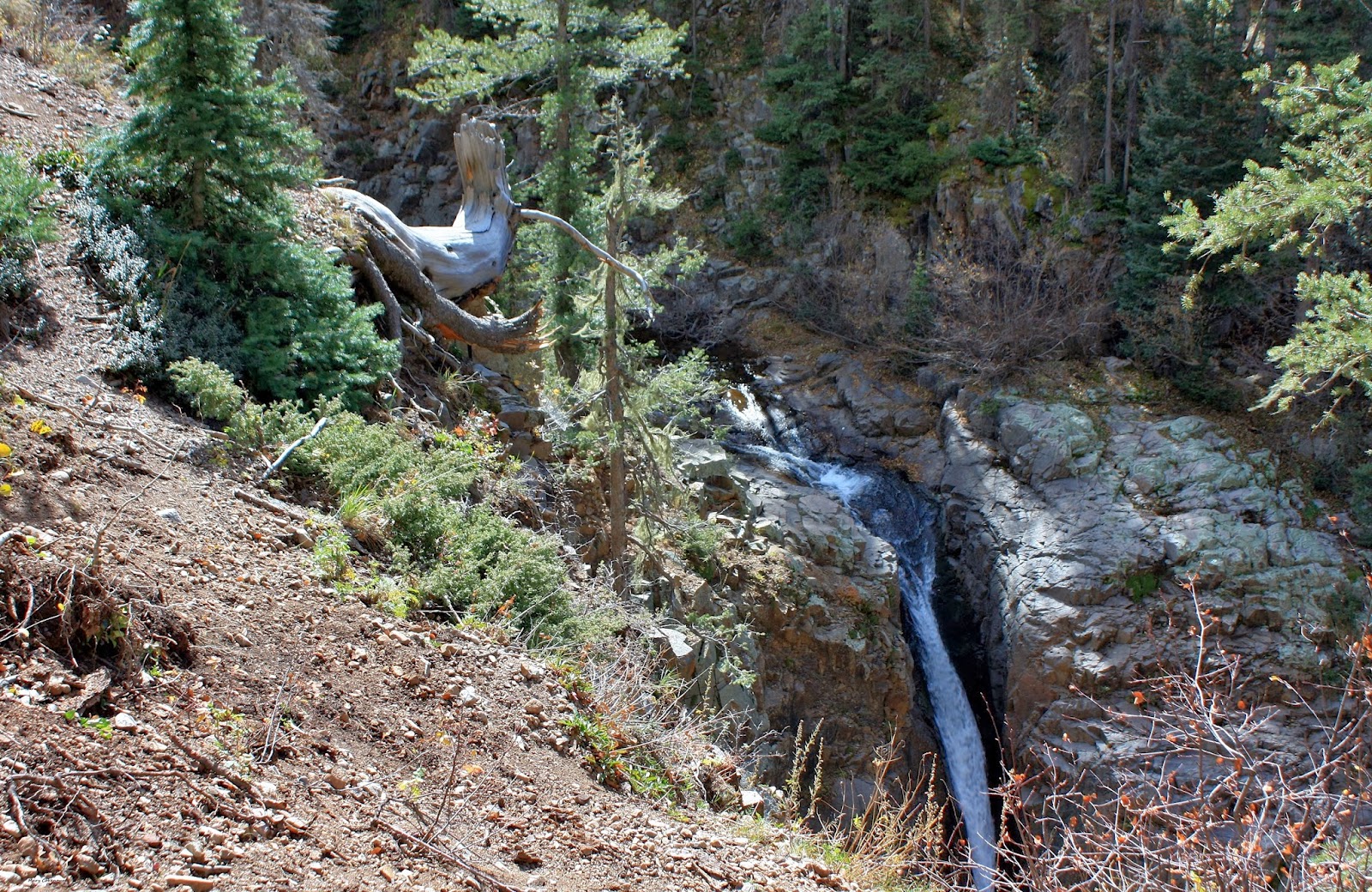 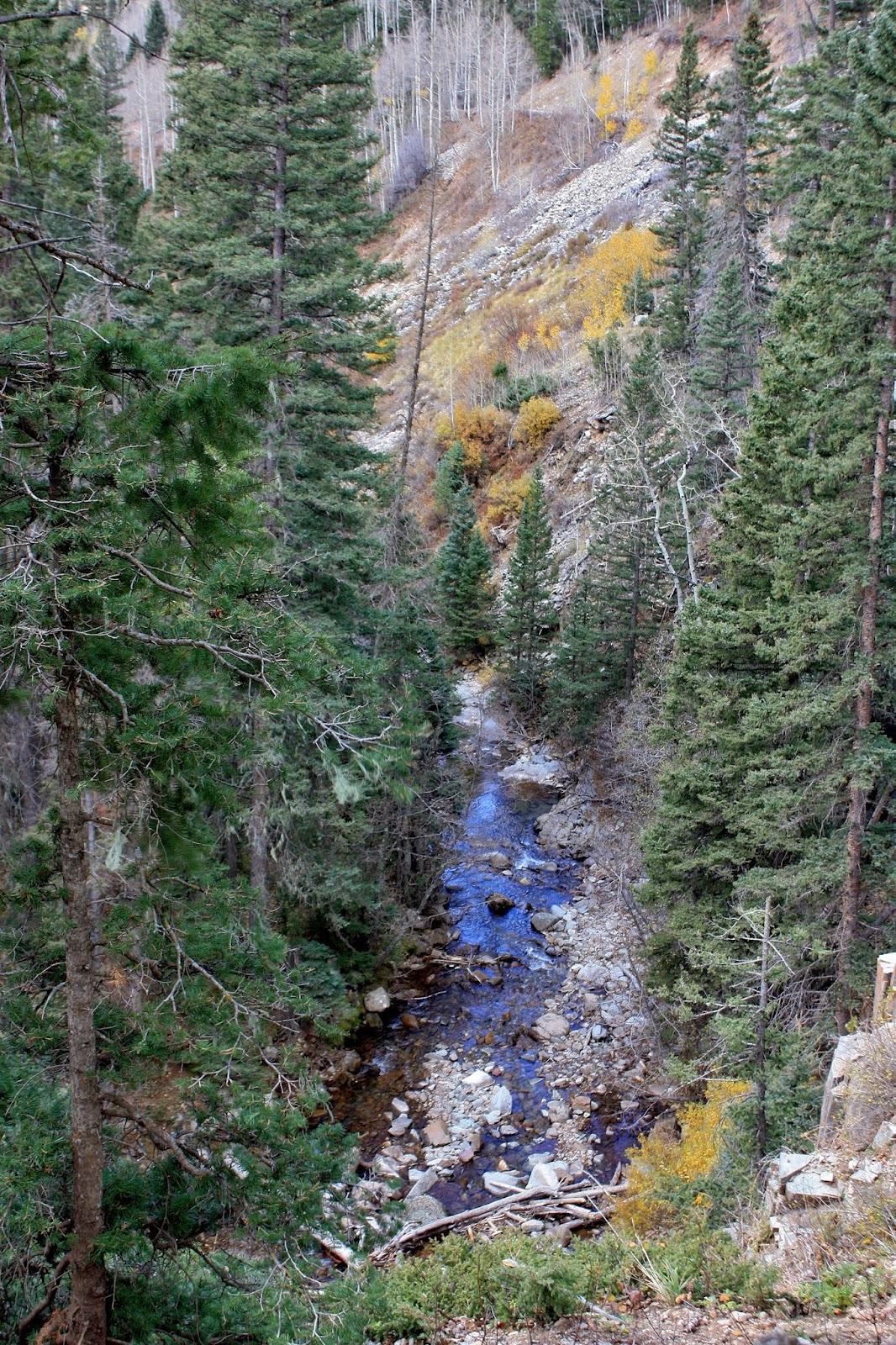 The road itself will begin to get a bit rougher when you begin an even steeper incline; to the right will be a creek and a pretty impressive waterfall.  Past this area the road is layered in roughly cut rocks and while a 4 wheel drive vehicle can make the trek, it will be a very bumpy ride.  We simply parked and walked for awhile; a massive pickup truck passed by us; more than likely coming from the mine that the Wildcat Mining Corporation was working further up into the canyon.  When you pass those homes, when you first get onto Route 124, don't be surprised to see many a sign protesting the opening and running of the mine. 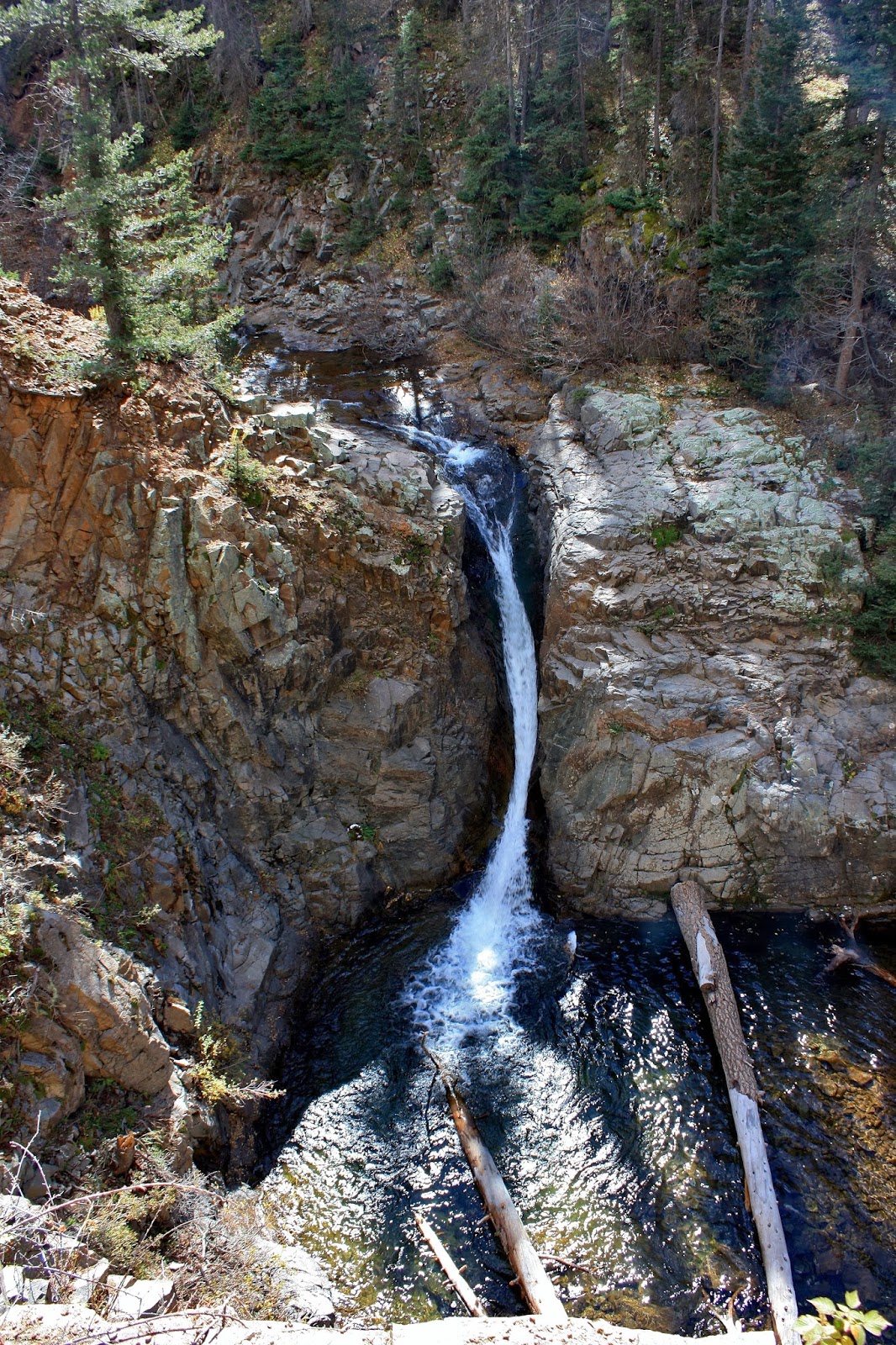 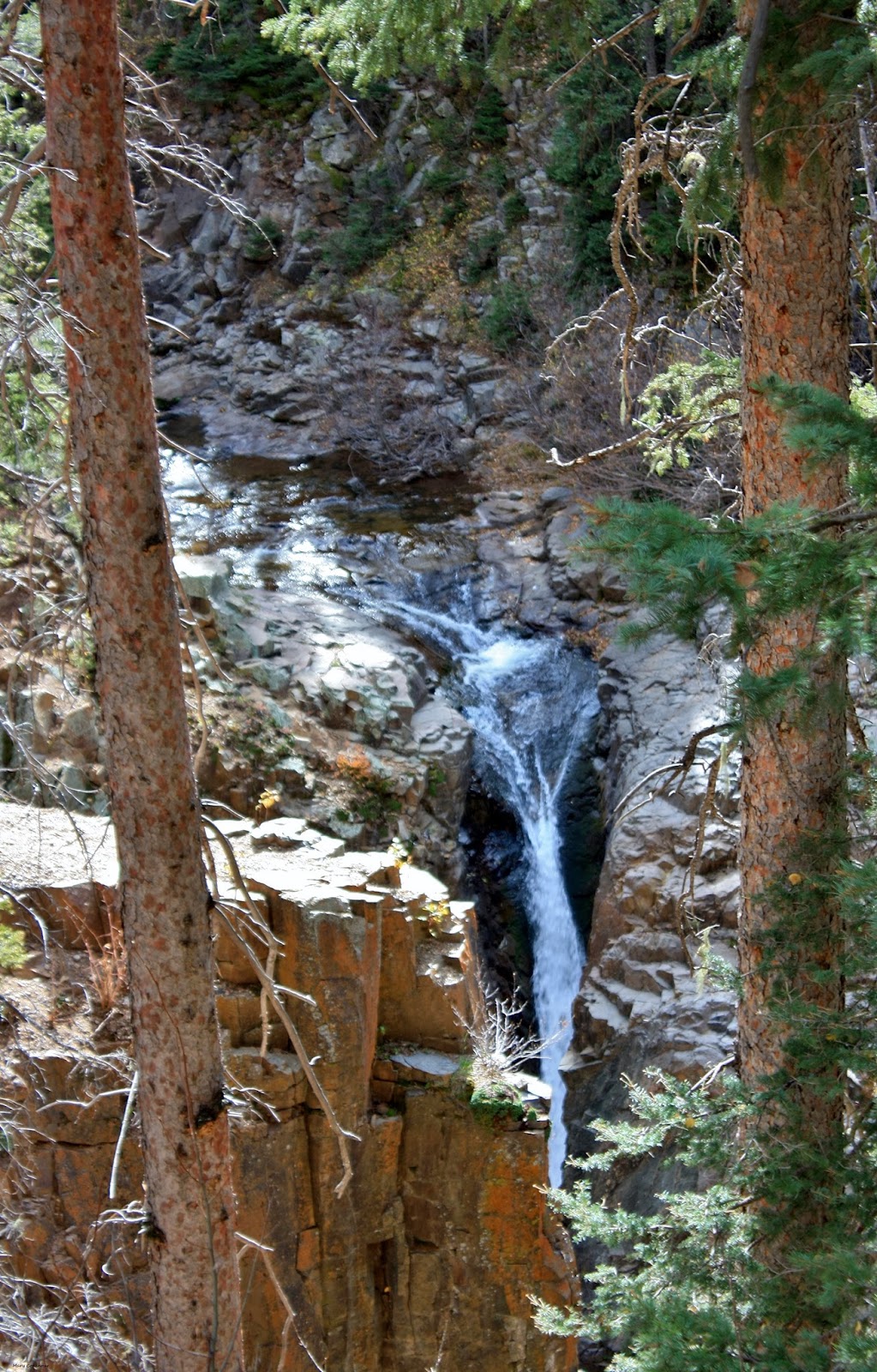 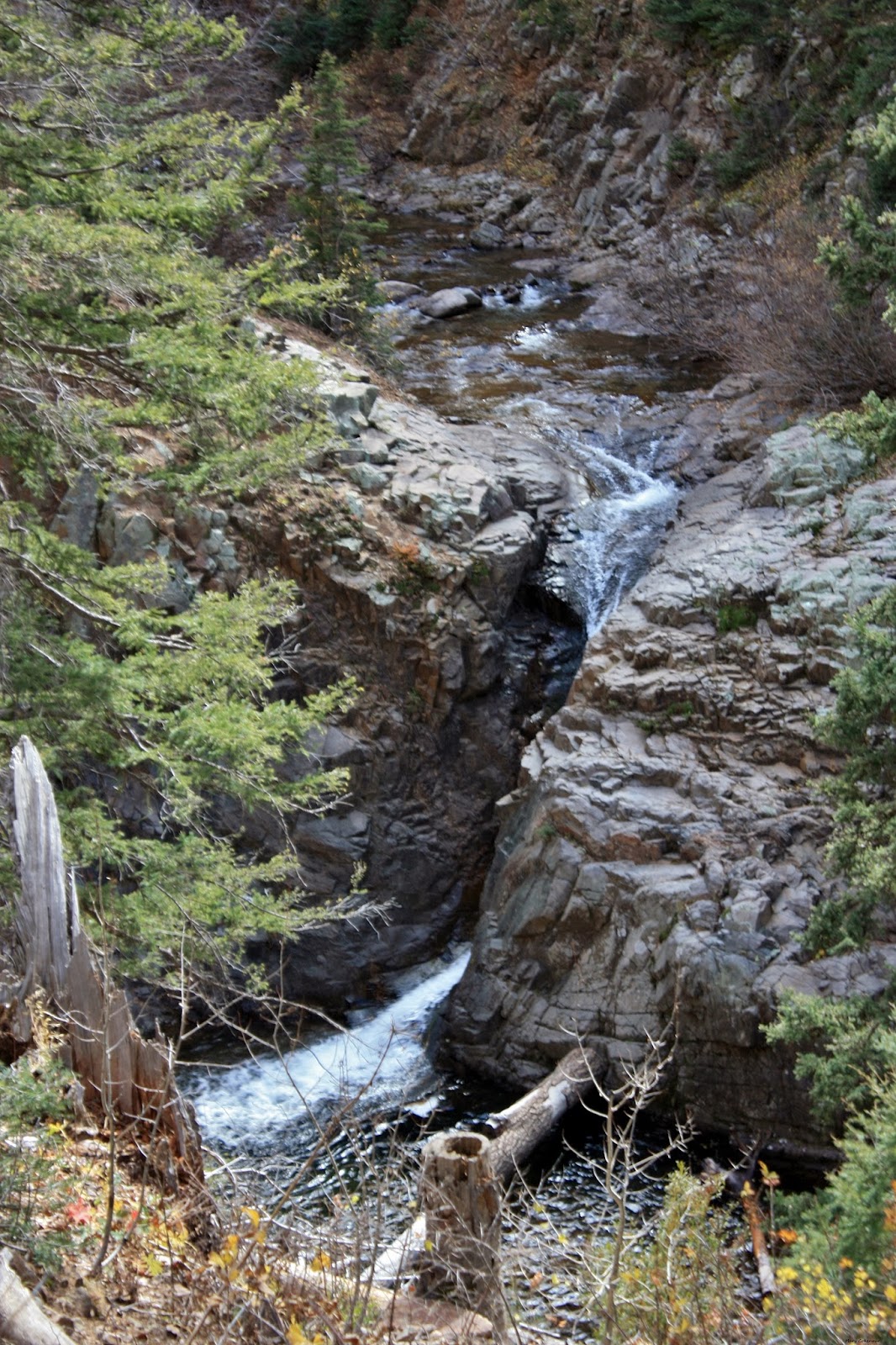 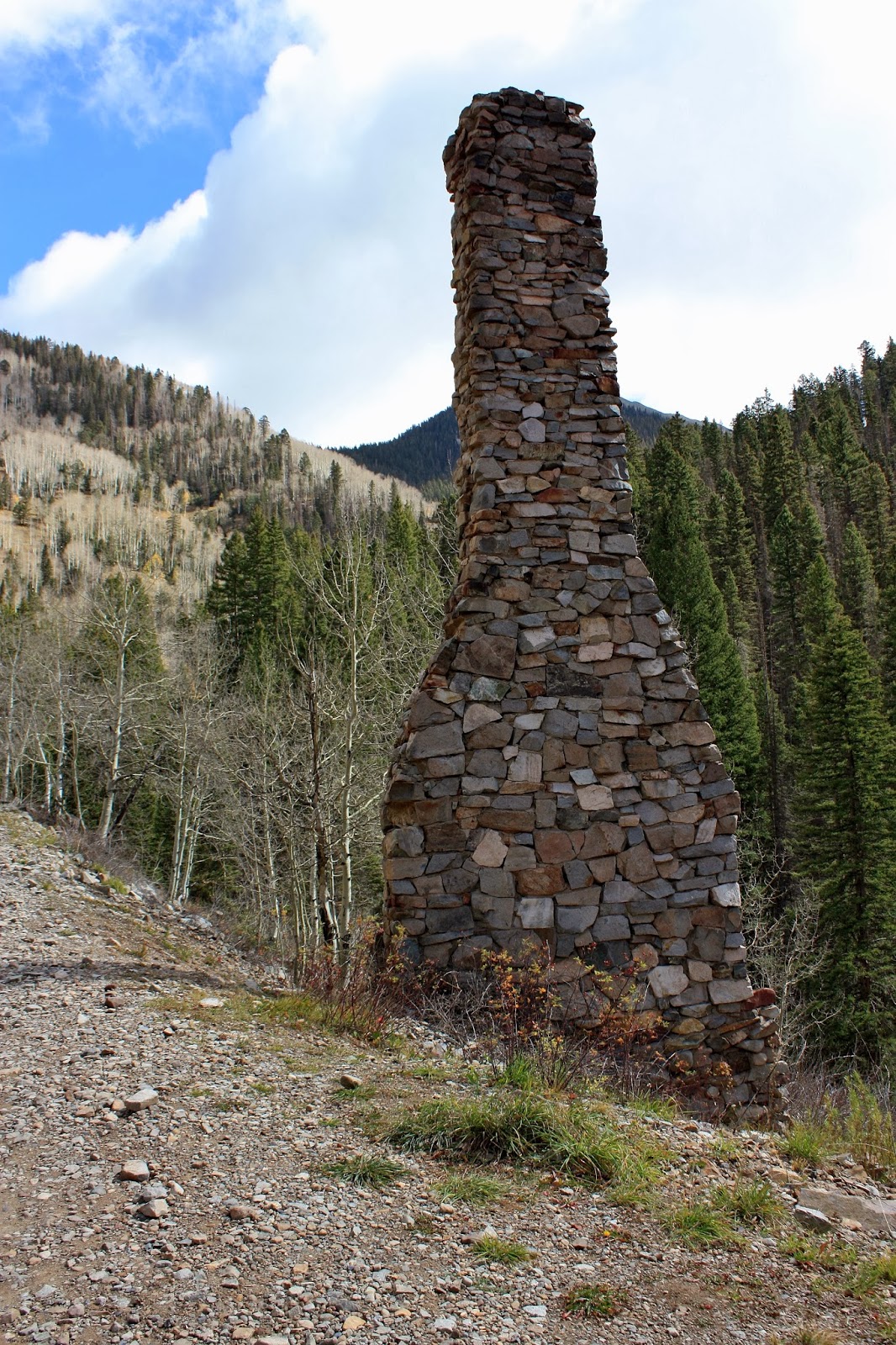 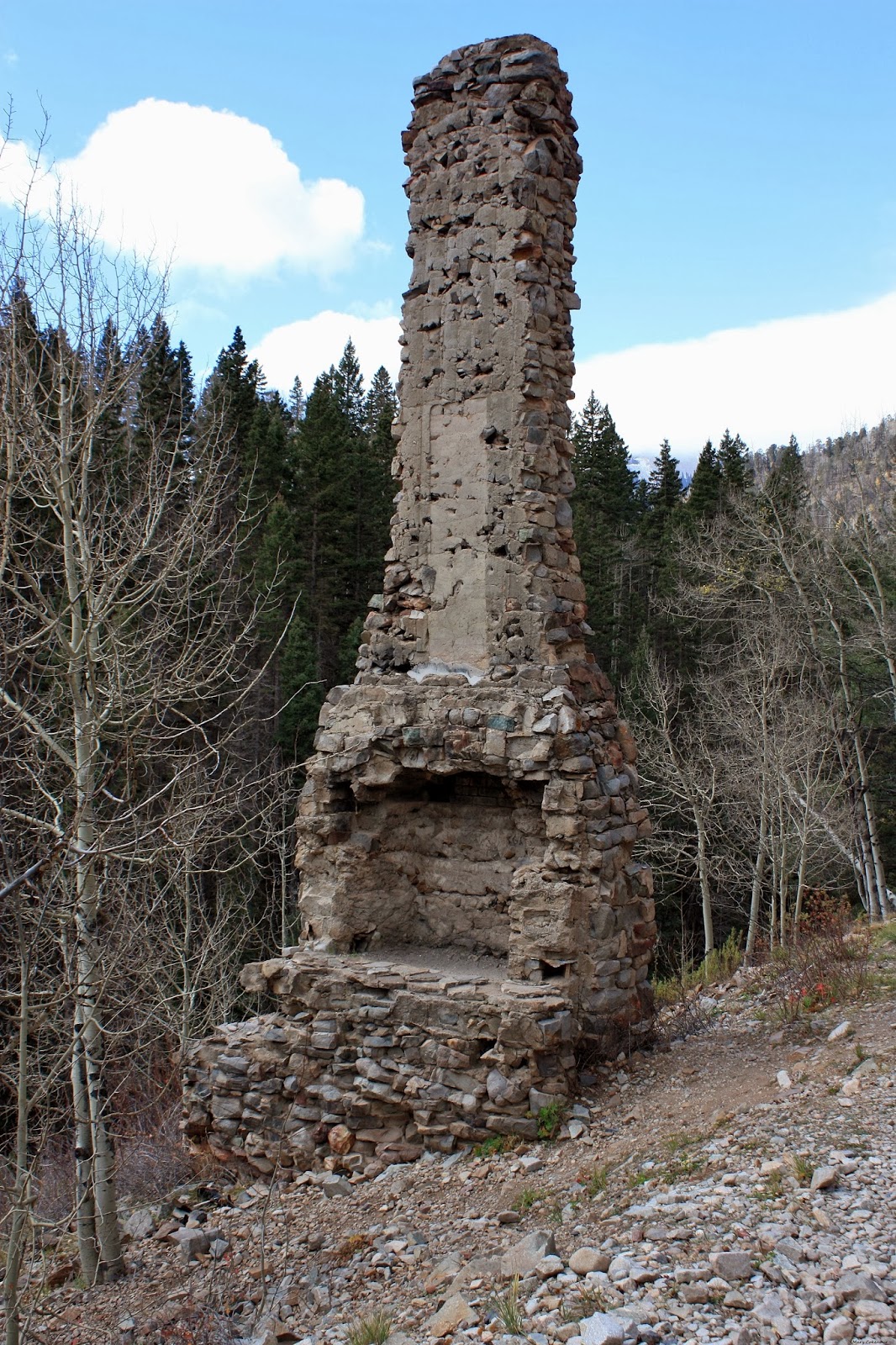 About a quarter of a mile up the road, from the waterfall, is the only solid remnant of a mining camp, a tall stone chimney.  Located high up in this canyon area, it's a surprise to come upon, and yet starkly surreal; wander around a little and you will see a piece of wood planking, perhaps from a wall or floor. 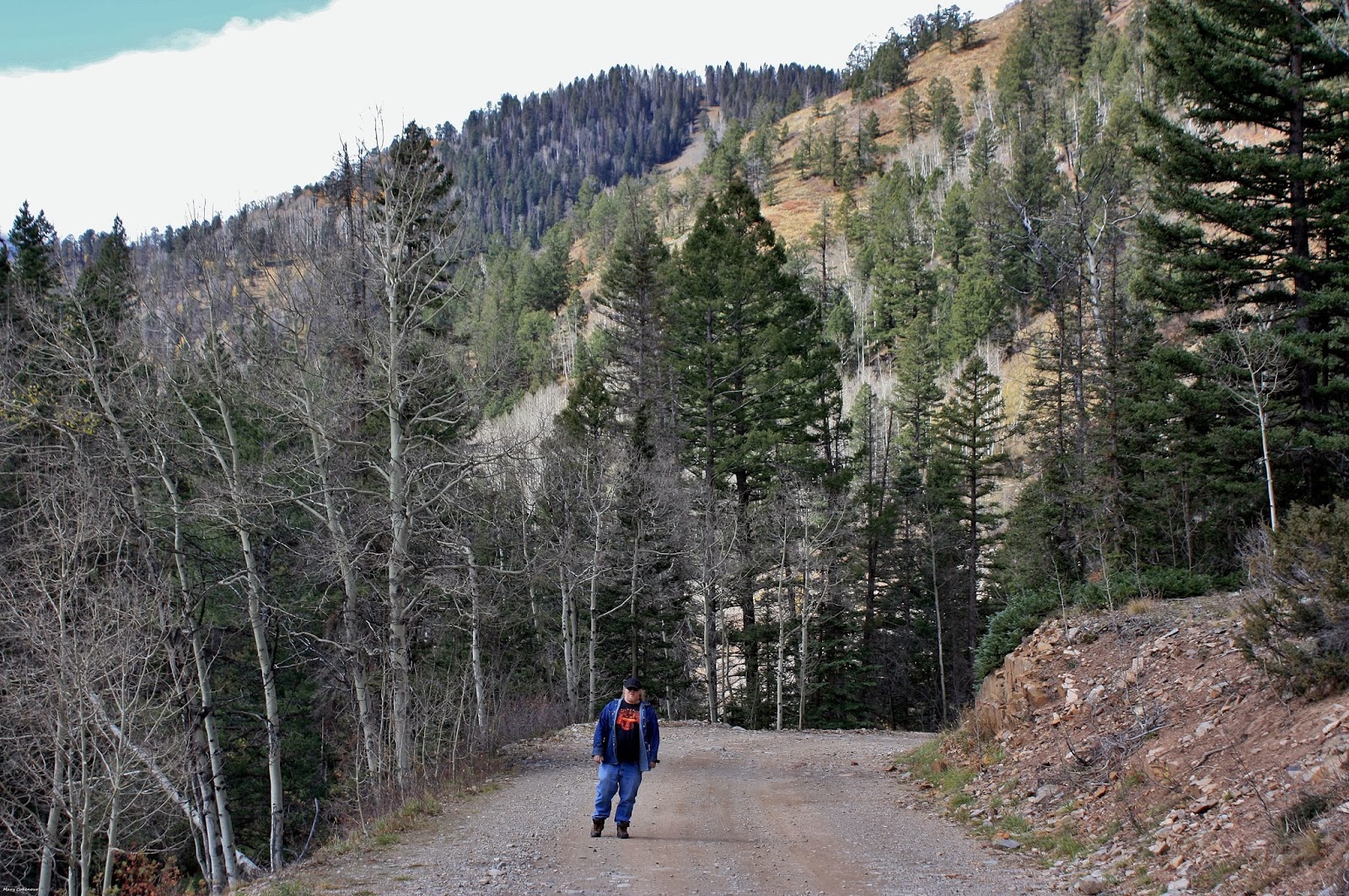 This entire canyon trek is filled with beauty; there were many trails that could be hiked, and pieces of history to explore.  While we wanted to keep hiking ourselves, the cold mountain air was creeping into our bones; the rough stone road ahead kept us from going further on with the SUV as we just didn't want to get stranded with flat tires, or damage an axle.  That certainly does not mean that we won't come back and try again; hopefully those rocks will have worn down a bit.
Mary Cokenour
﻿
Posted by Mary Cokenour at 12:05 PM