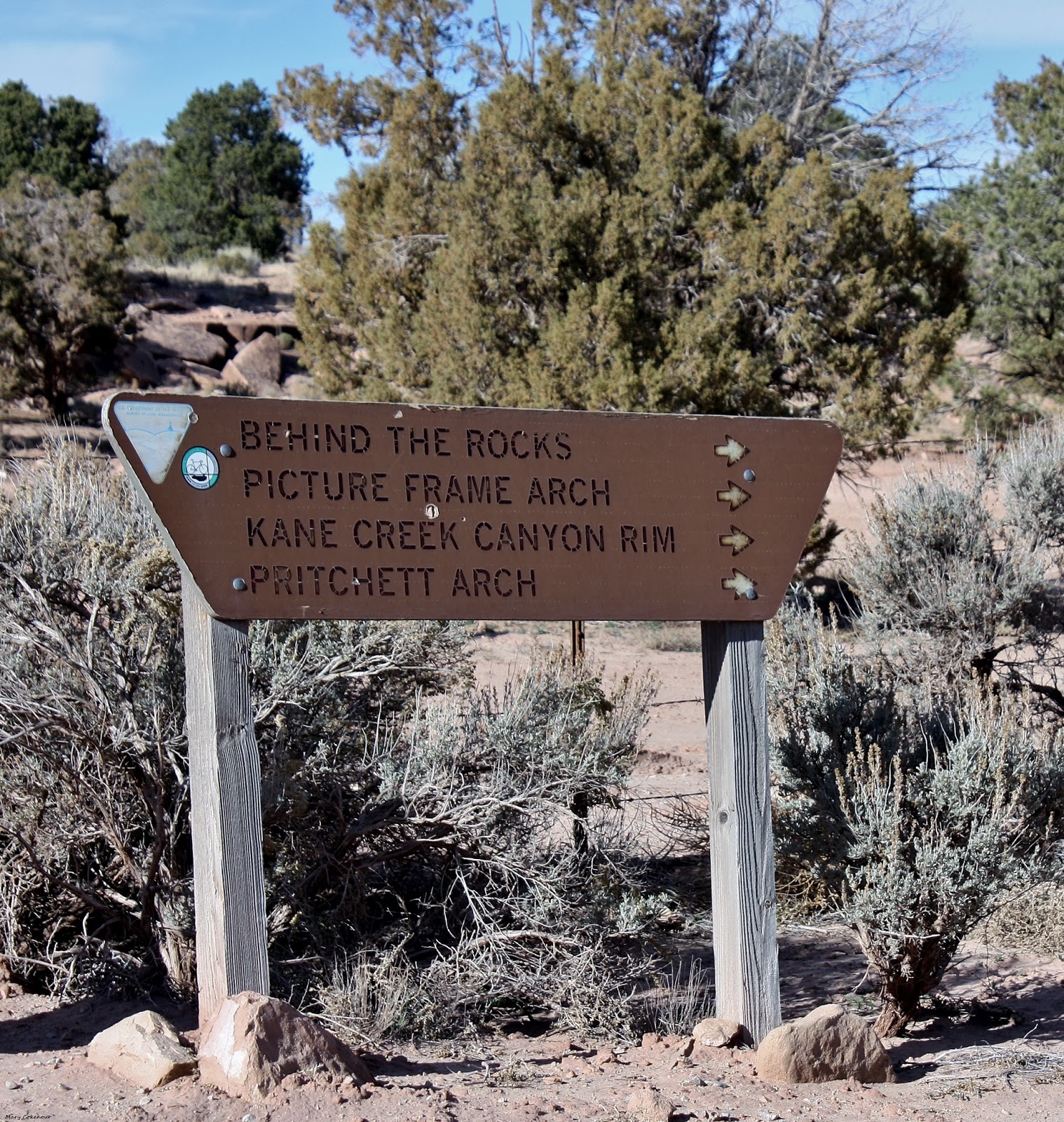 Now you might have just read the title of this post several times and are still trying to figure out what I'm talking about.  Maybe you're even looking at maps of the Moab area trying to find "Lone Rock Road"; it doesn't really exist.  What I will be telling you about though is Kane Creek Canyon Rim which leads to Lone Rock, the trail to Behind the Rocks, and an overlook of Kane Creek Canyon with a view of Hurrah Pass.  Here come the warnings first; there are dirt trails all over the place - many you are not allowed to travel on; there are barely any signs - make sure you have maps with you to keep from getting lost, or onto trails you cannot manage with your vehicle; the road to Lone Rock is graded dirt, still very bumpy and while a car can just manage it, 4 wheel drive should be the rule not an after thought.  The entire trip to and back from the Kane Creek Canyon Overlook is three to four hours dependent on how long you stop to explore and take photos.  Now lets go on a most awesome adventure! 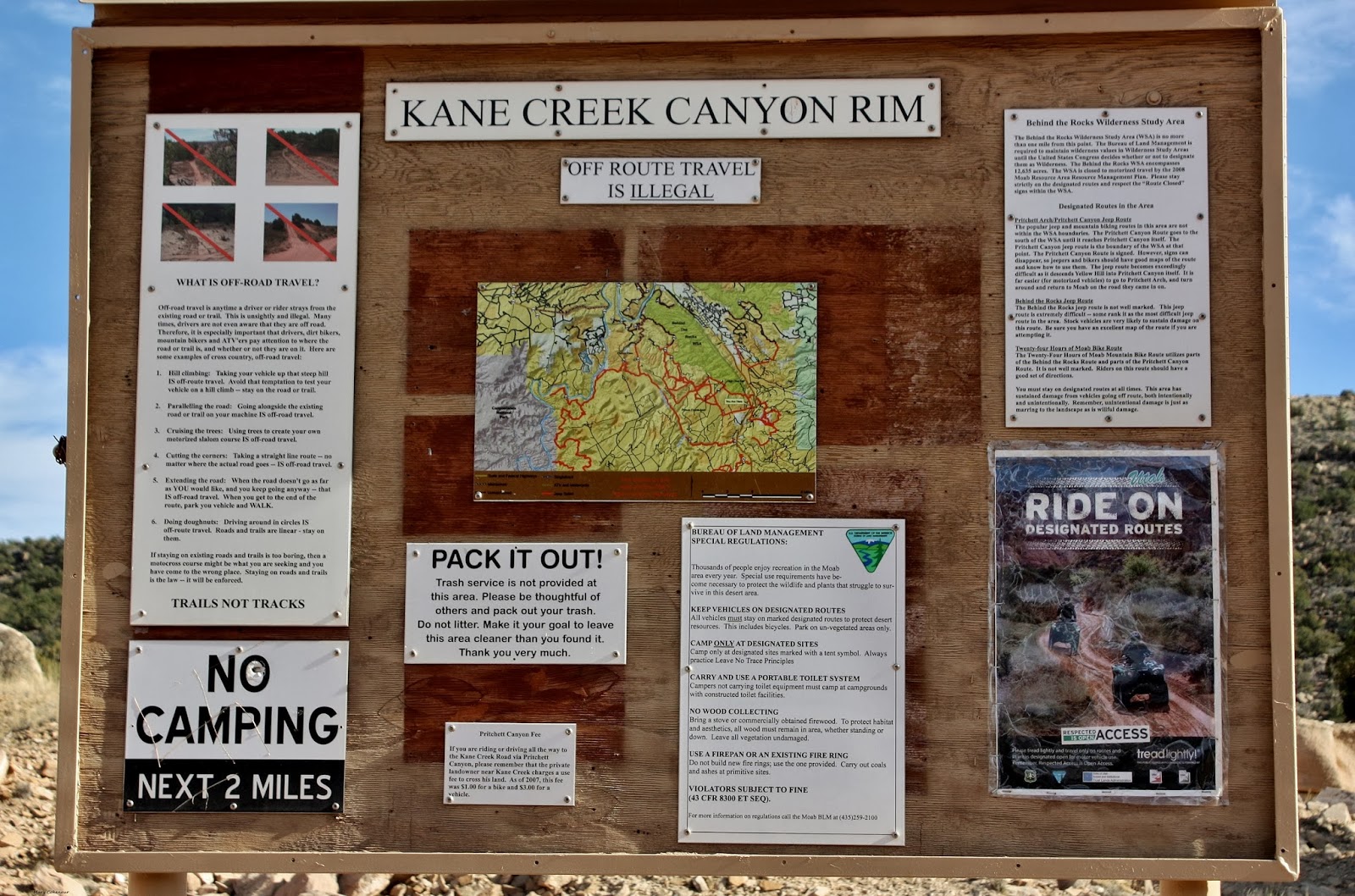 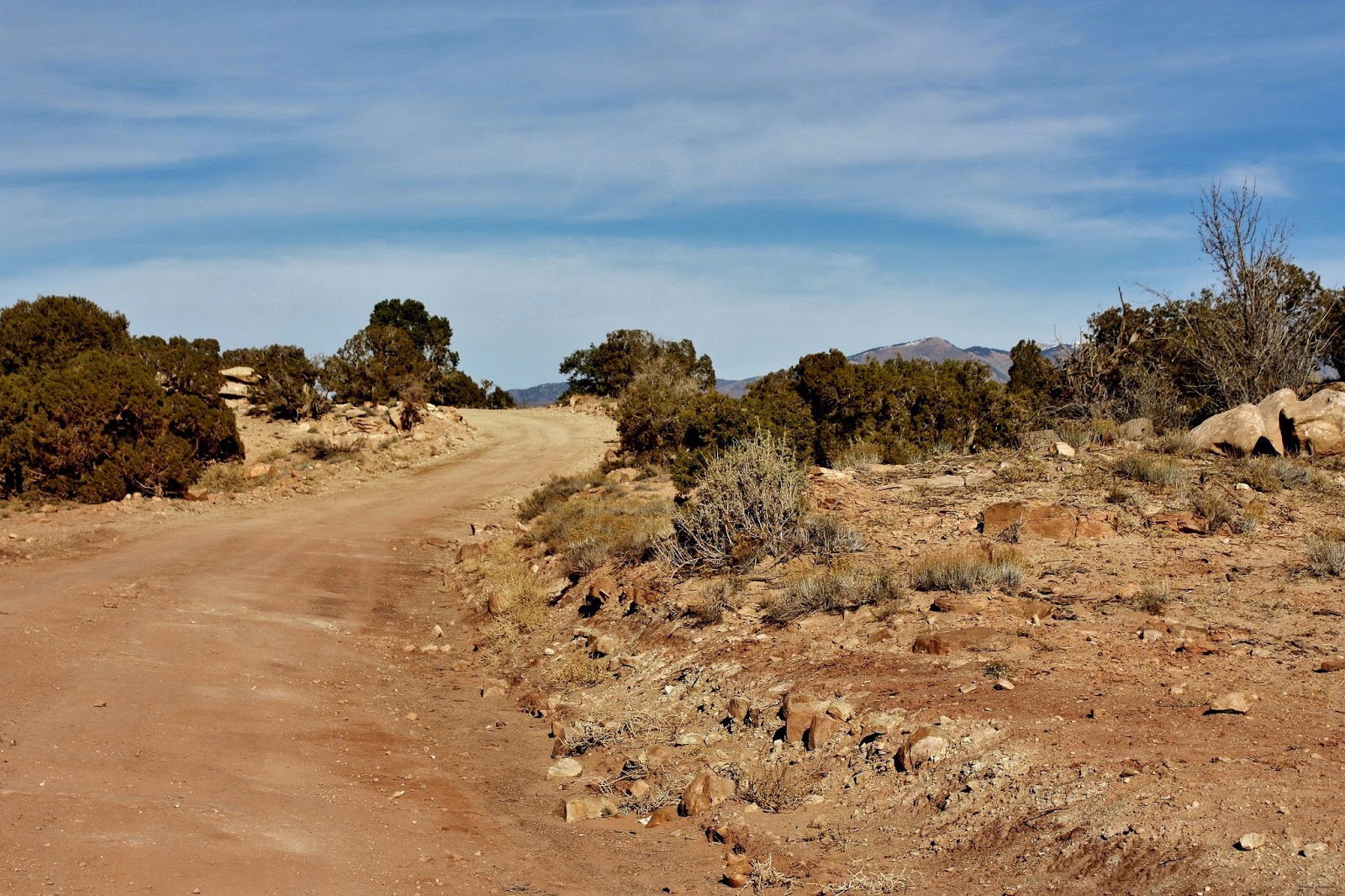 After leaving Moab, go 12 miles south along Route 191 until you see Black Ridge Recreation Area parking lot (in San Juan County); directly across is an unmarked dirt road, make the turn onto this road.  It curves to the right and that is when you'll see the information board ahead, a little further on is the directional road sign.  This is also where you can decide if you want to drive this type of road or not; if you're on a dirt bike, ATV or have a 4 wheel drive vehicle you more than likely won't put much thought into it, you're prepared.  Car drivers be warned, while graded up to the Lone Rock area, there are still rocks embedded in the dirt, it's a bumpy ride and you will not really be able to travel much further than Lone Rock.  I'm not trying to scare you off, just making sure you understand this is a natural area, no paved roads.

The scenery along the road is open range, desert, sage brush; some dirt trails are private and lead to a ranch, but most lead off to....?   There is one area which is basically giant sand dunes and the tire tracks upon them tell you they're a giant playground. 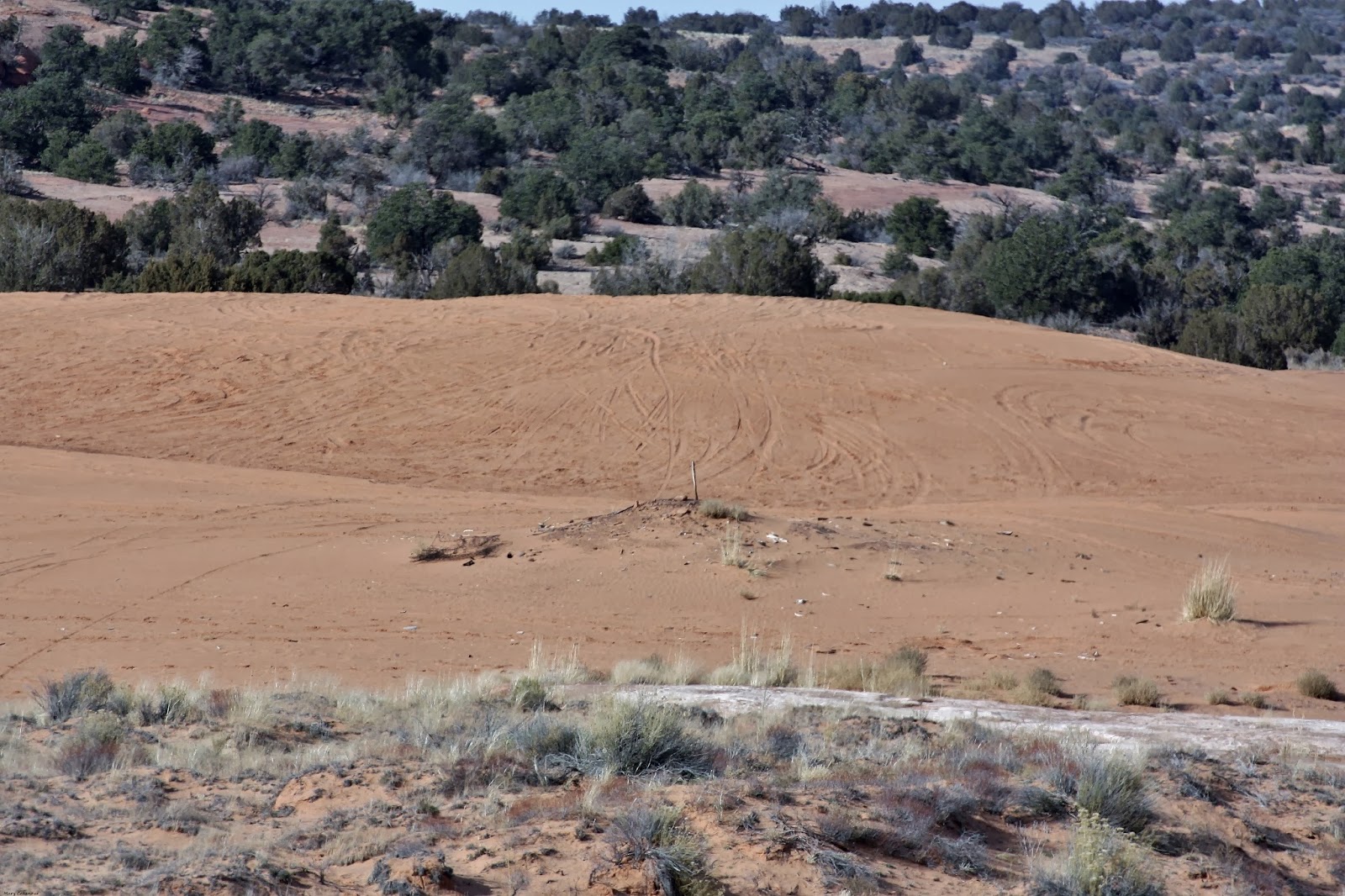 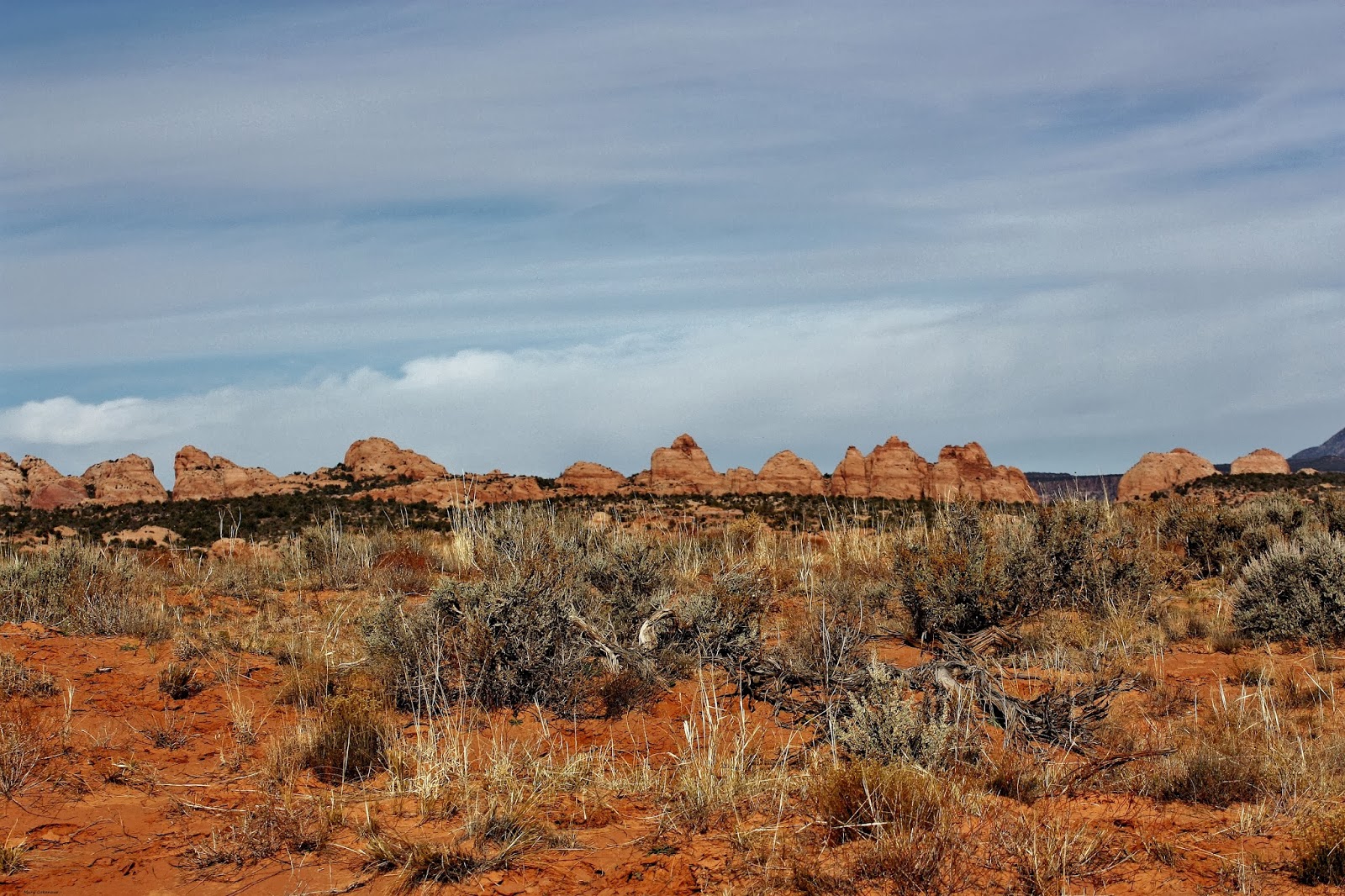 Moving on and looking to the right, you'll see some rock spires standing in groupings; these are known as the Terra Cotta Warriors which are reached via the Behind the Rocks trail.   In sunlight, they have a light colored appearance, but we passed them again at sunset...they were on fire!

Oh, I better give you one more warning, this post will have a lot of photos! It is truly the only way you'll understand the entire experience through photos and words.

Lone Rock (aka Prostitute Butte) will be in the distance, you can't help but notice it; the appearance will change as you get closer and the caves in the rock face will become clearer.   A little history behind the names of this formation: Originally it was called "Prostitute Butte" by the white settlers; the Anasazi used the area for religious ceremonies dedicated to the "mother deity"; it is assumed that sexual practices were part of the ceremonies which offended the white people.  A mother goddess is a term used to refer to any female deity associated with motherhood, fertility, creation or the bountiful embodiment of the Earth; the goddess was referred to as Mother Earth or the Earth Mother.  The name change to "Lone Rock" now dedicated the area to the Anasazi male fertility god, the Kokopelli; usually depicted as a humpbacked flute player (often with feathers or antenna-like protrusions on his head).  Kokopelli presides over both childbirth and agriculture; he is also a trickster god and represents the spirit of music.   In other words, if a female deity was involved...prostitute; male deity...just a lonely guy; can you feel my eyes rolling around in their sockets? 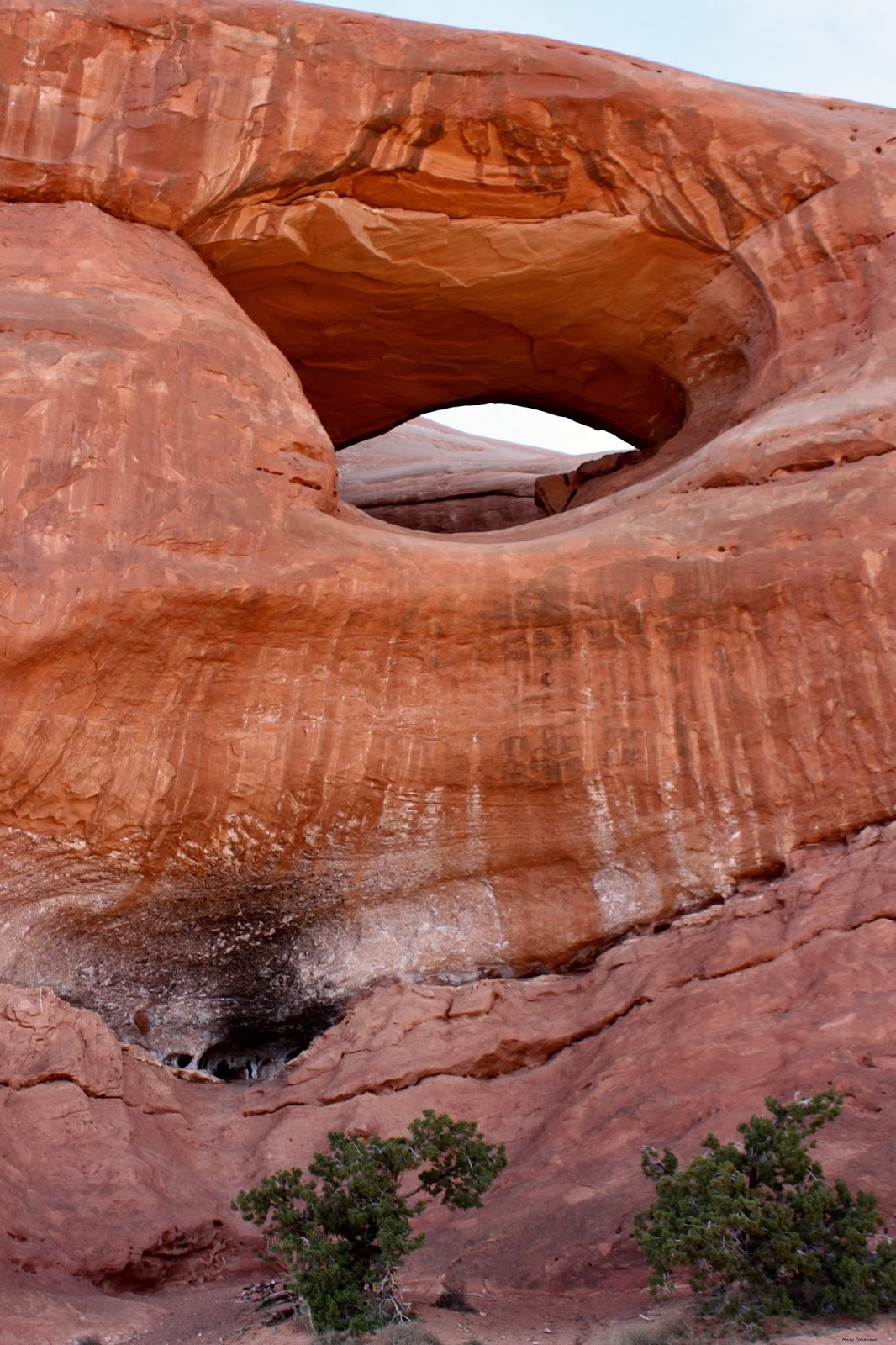 There are two arches located within Lone Rock, a short sandy road leads off the main trail towards Lone Rock; Balcony Arch is the first arch to see and becomes clearer the nearer you approach.  Sorry car drivers, but this is about as far as you can go; to get to the next arch, the road is sandy, rocky and has a few major dips that made even us pop out of our seats, and we were driving an SUV. 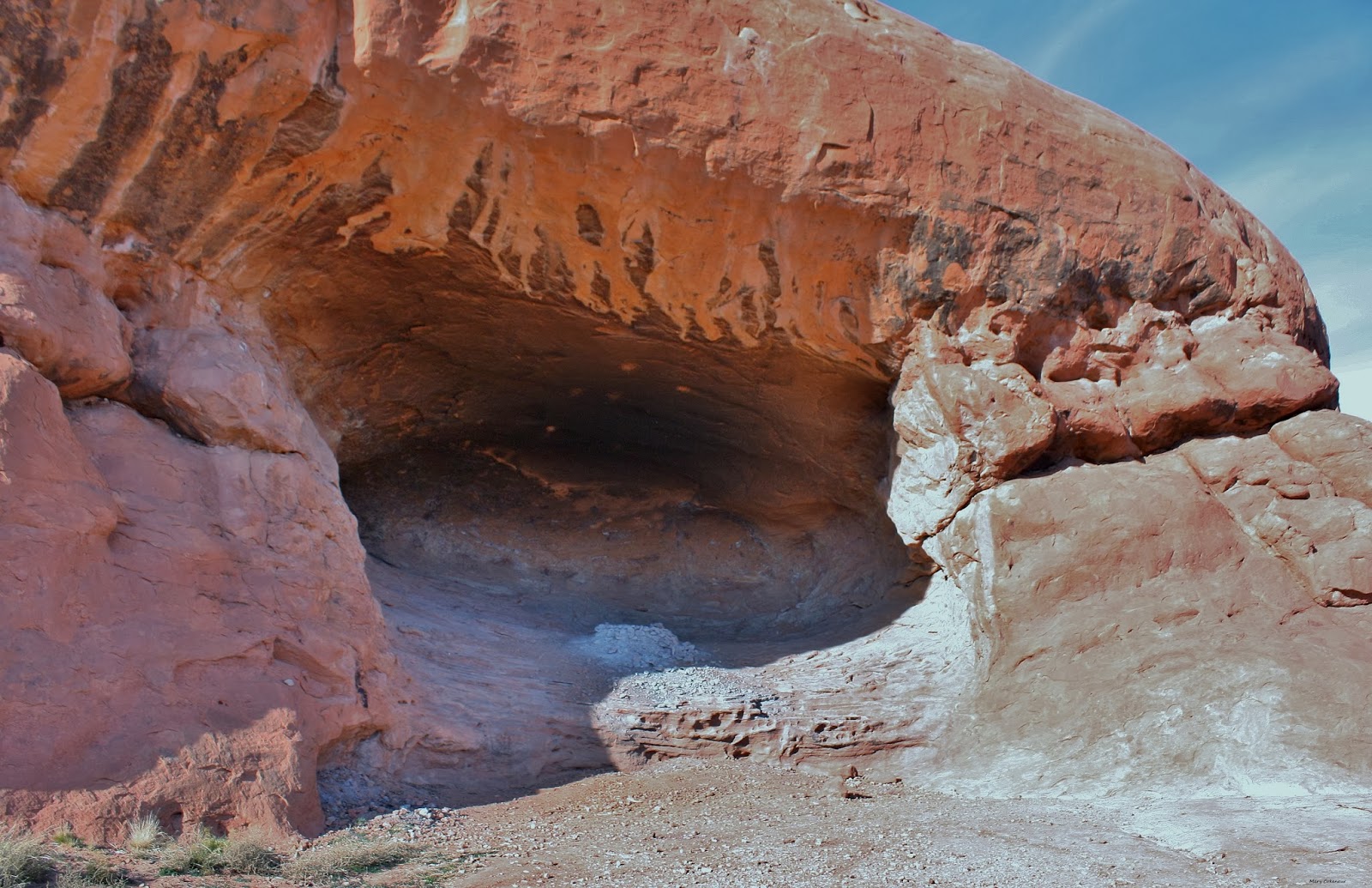 If you're feeling up to it though, then hike the trail around to the back of Lone Rock to see the next arch I'm going to feature in photos...Picture Frame Arch.  Along the way you will pass a cave that has become a site for campers; we explored inside and it is pretty cozy.  Anyway, keep hiking or driving towards a small sandstone mound, the trail will take a steep dip downwards before curving around Lone Rock itself.  The trail becomes more slickrock and, well, you kind of have to figure out which section of the slickrock to stay on as it is not marked. 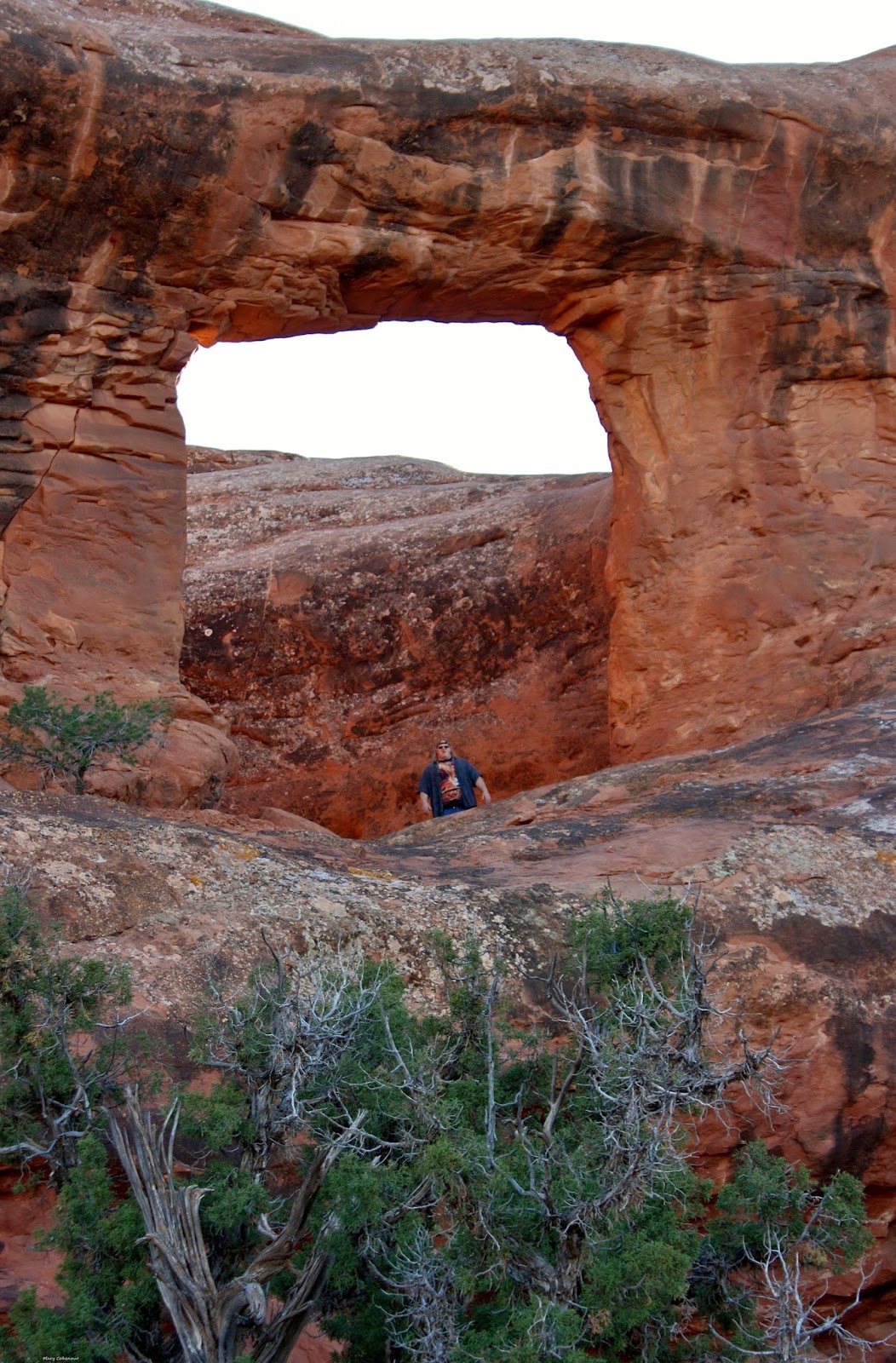 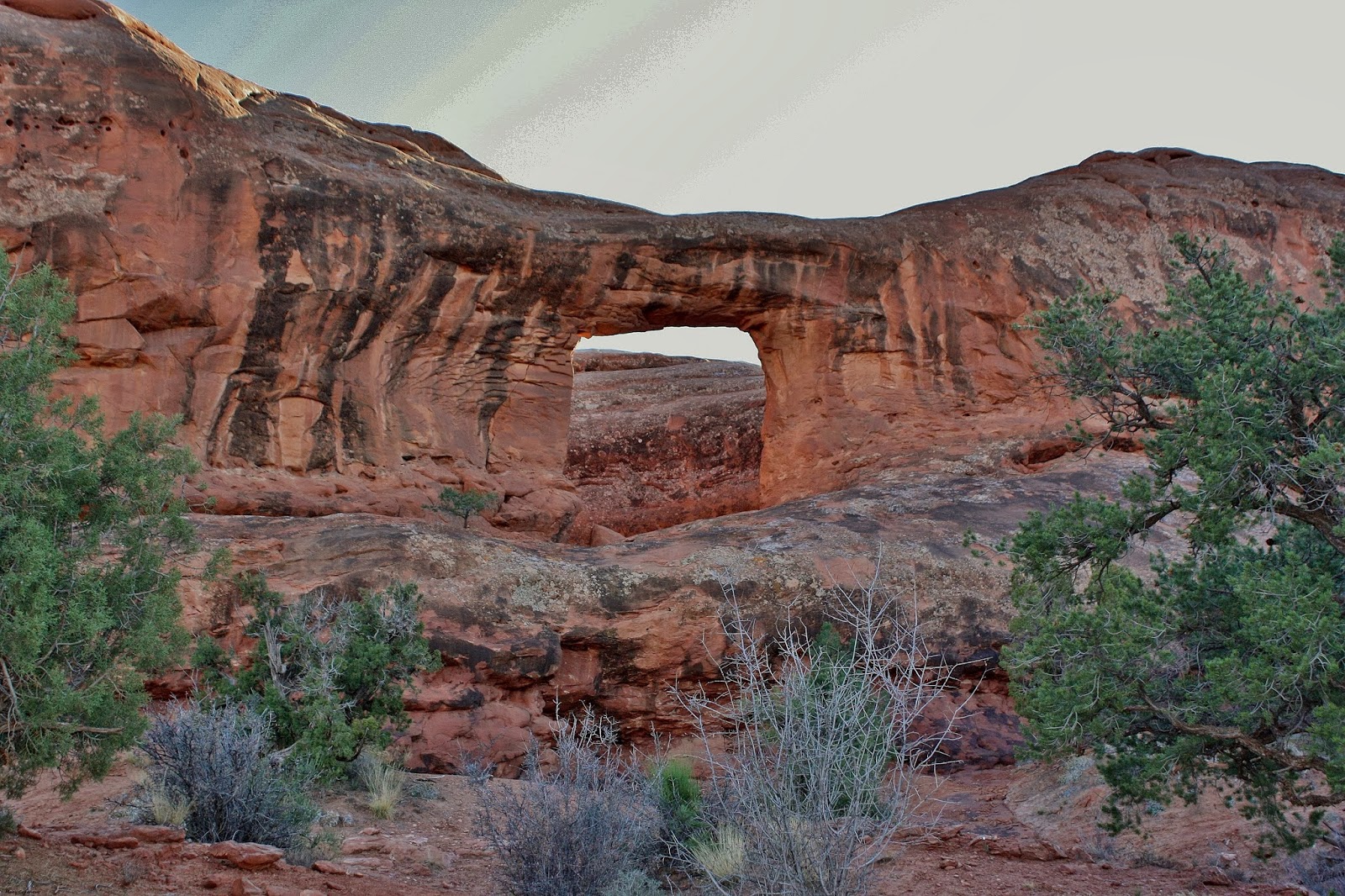 Picture Frame Arch is amazing; almost perfectly square, and it is easy to climb along the rock ledges to get up to it.  From this area, the view of the Behind the Rocks area is simply breath taking!  To get back to the main trail, you will have to go back the way you came as the slickrock trail has become too worn down to travel safely, even ATVers find it difficult. 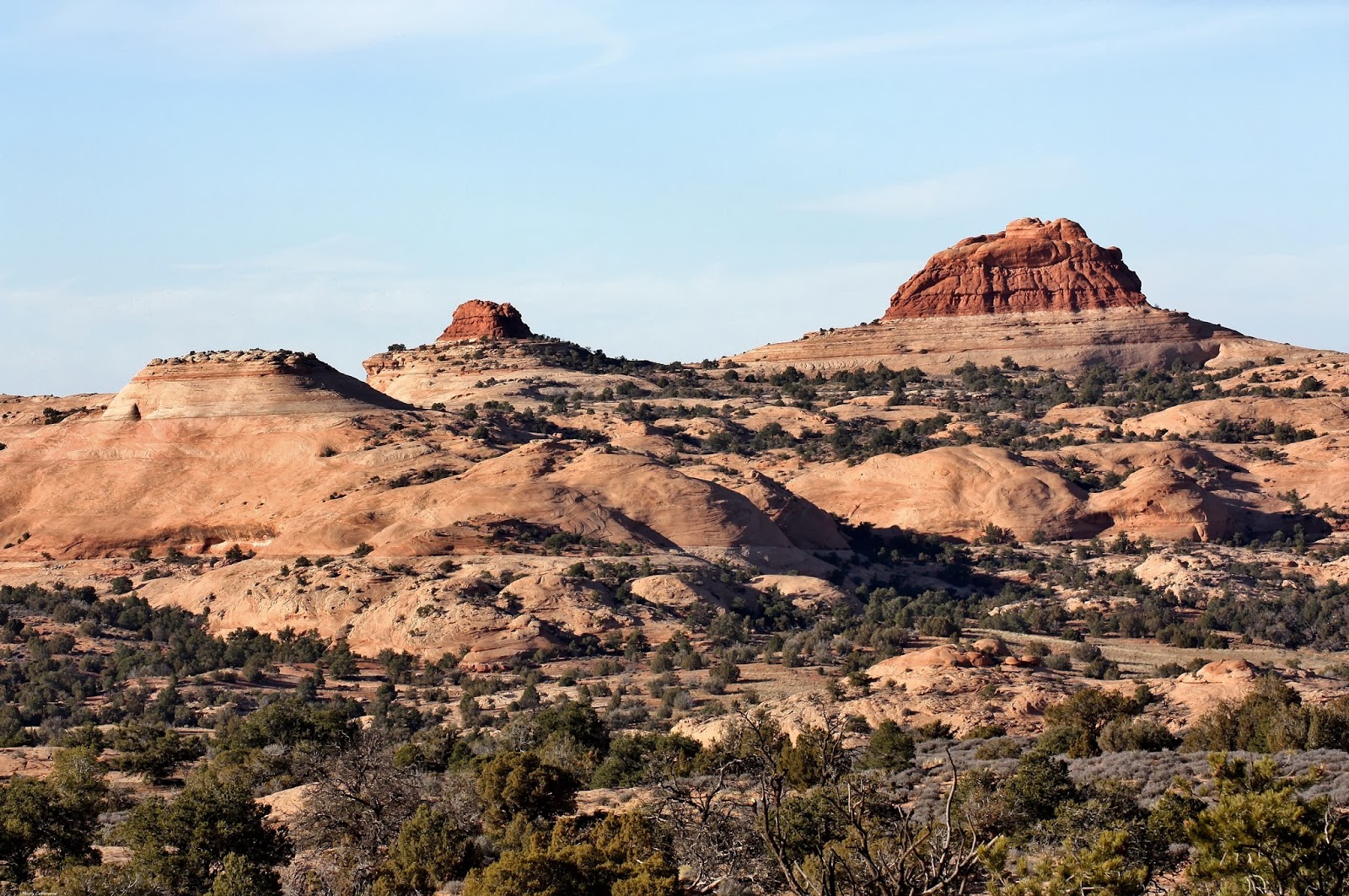 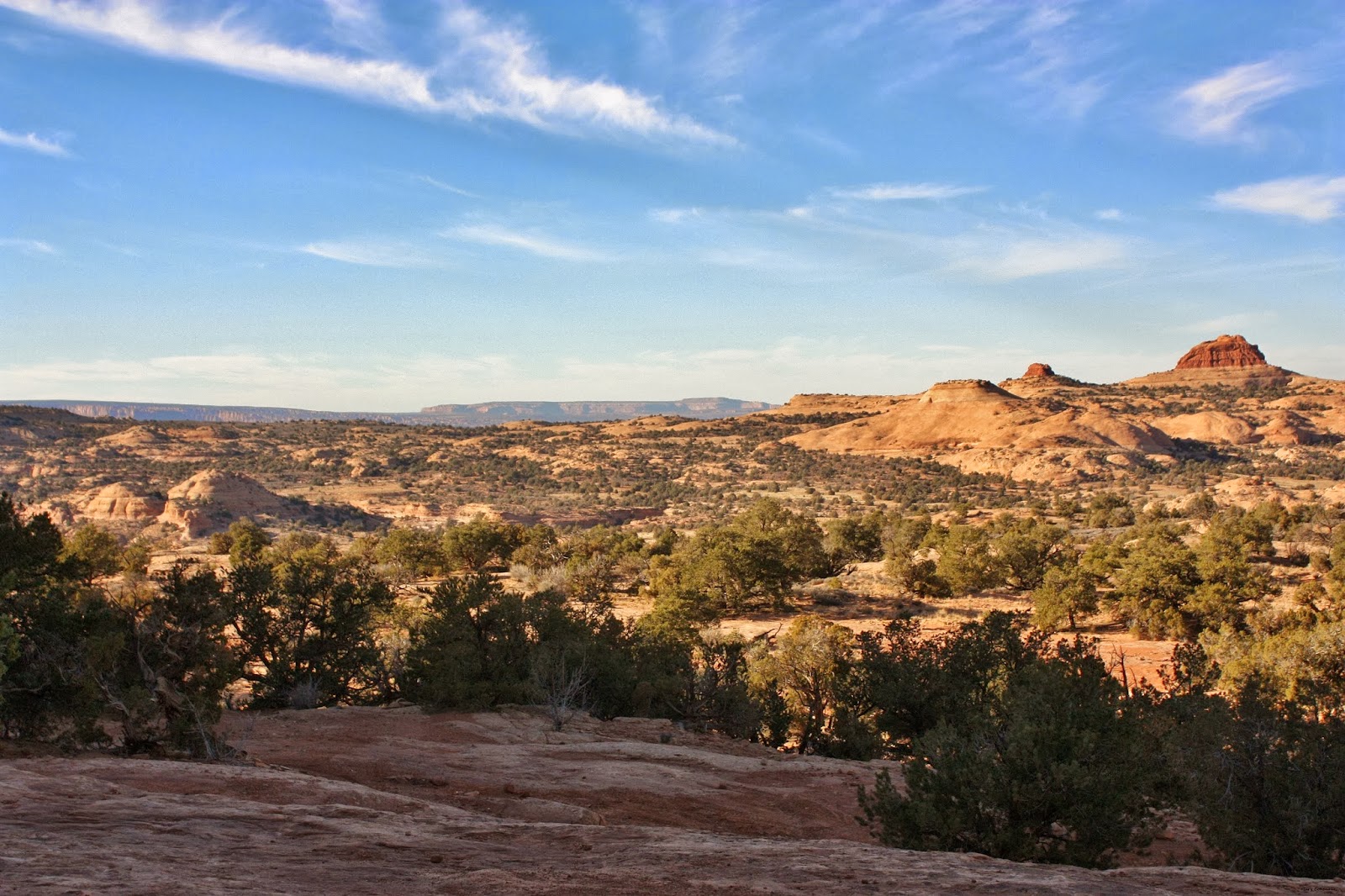 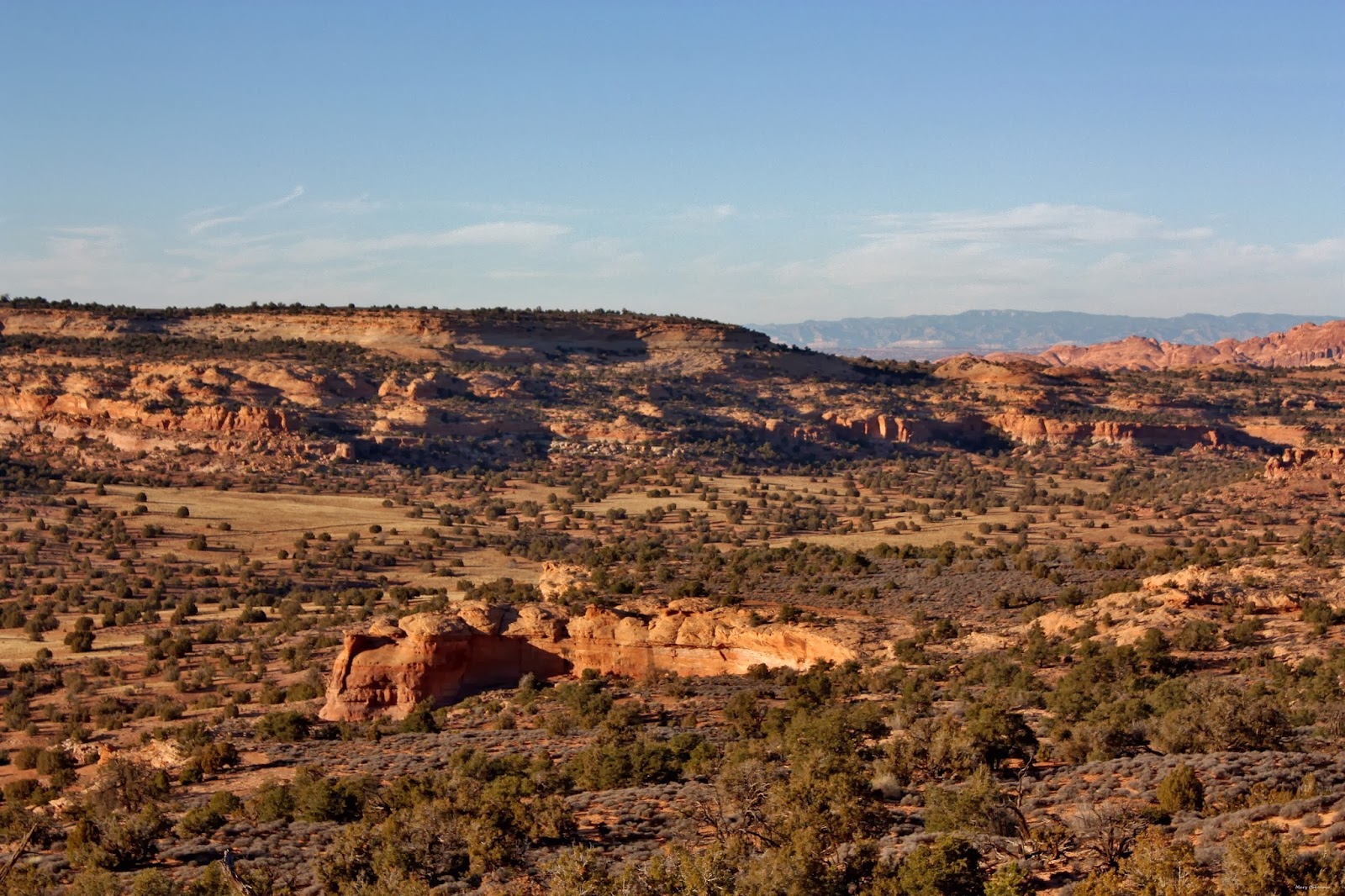 Heading westward after Lone Rock, the dirt trails begin to become rockier; you will see loads of shiny rocks, many whitish in color, these are agate.  Slickrock will begin to become more prominent and it is in layers, making the ride more and more jolting; I hit my head several times on the roof of the SUV!  Another interesting aspect is that you will see the slickrock in different colorings; the typical reddish or a concrete gray; sometimes mixed together, sometimes in side by side sections.  At one point there will be a minor split in the road which will converge almost immediately; take the right hand split though and drive along the ledge...what a view! 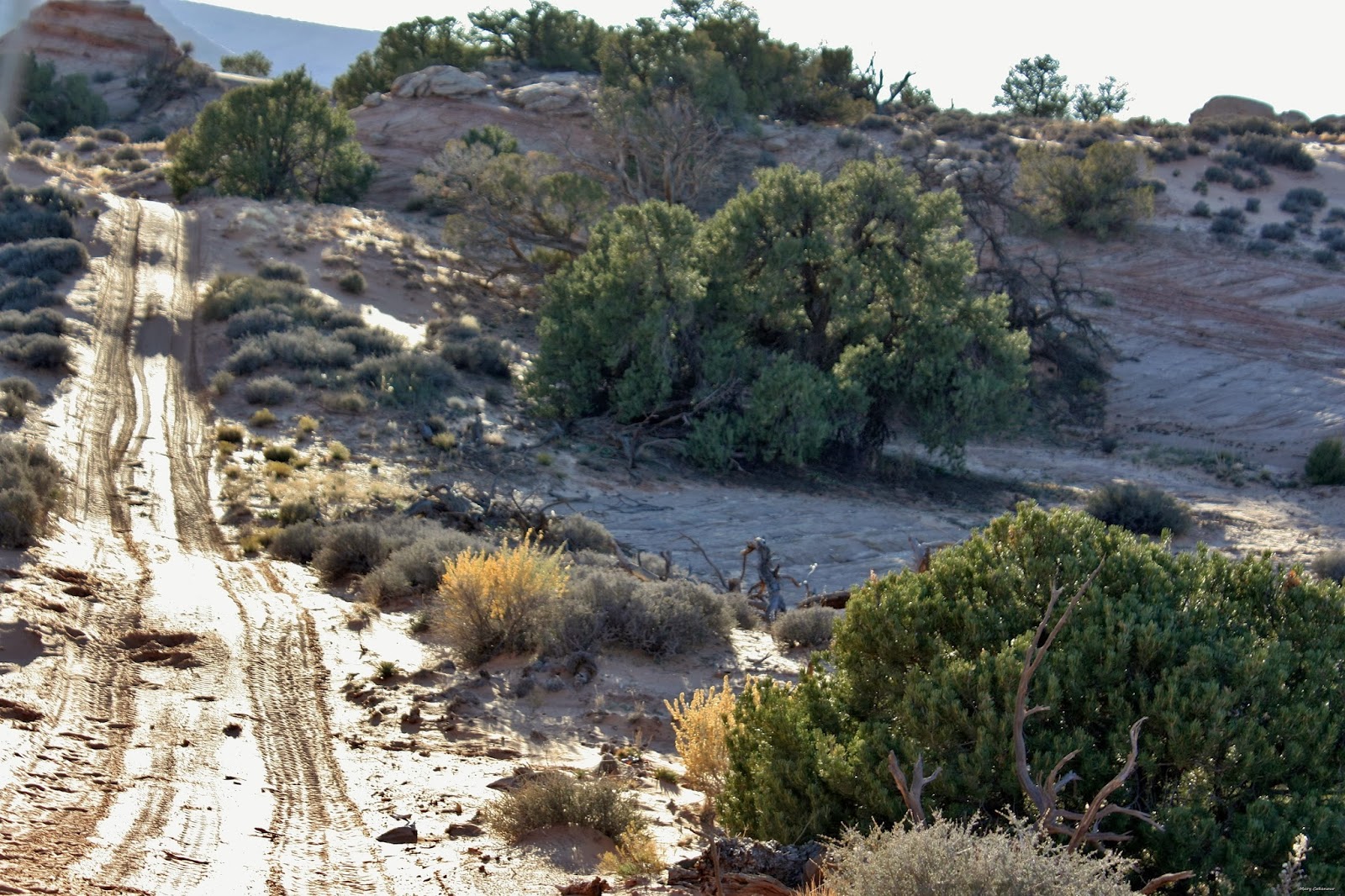 The trail also continues to dip, it's a wild ride, but very exciting too.  You know you're getting close to the overlook when you see this duo of formations resembling tiny homes.  Look back at the La Sal Mountains, again, what a view!  The day we were there (November 2013), they were full of snow and the moon (always visible in daylight out here) was directly overhead of them. 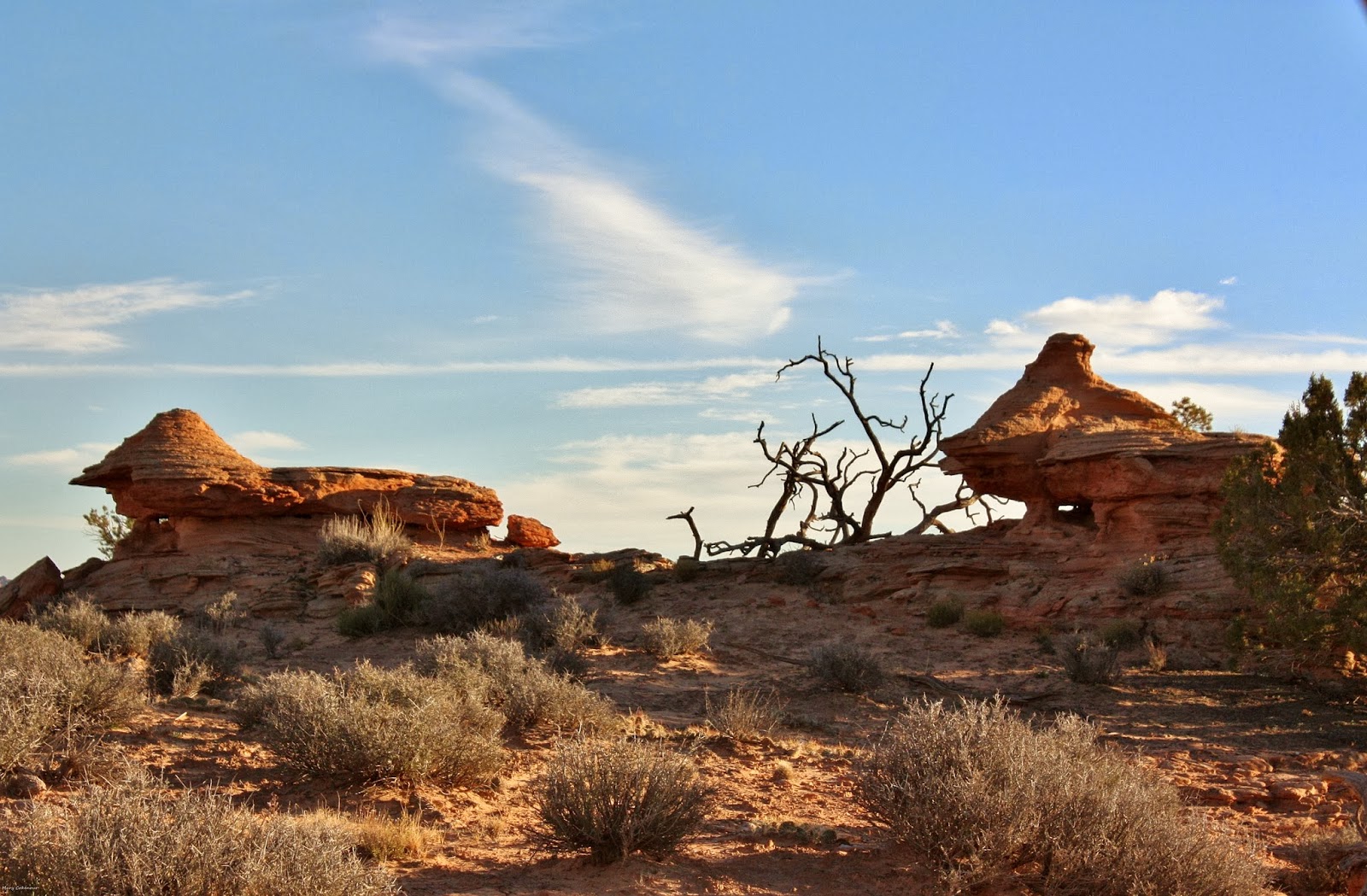 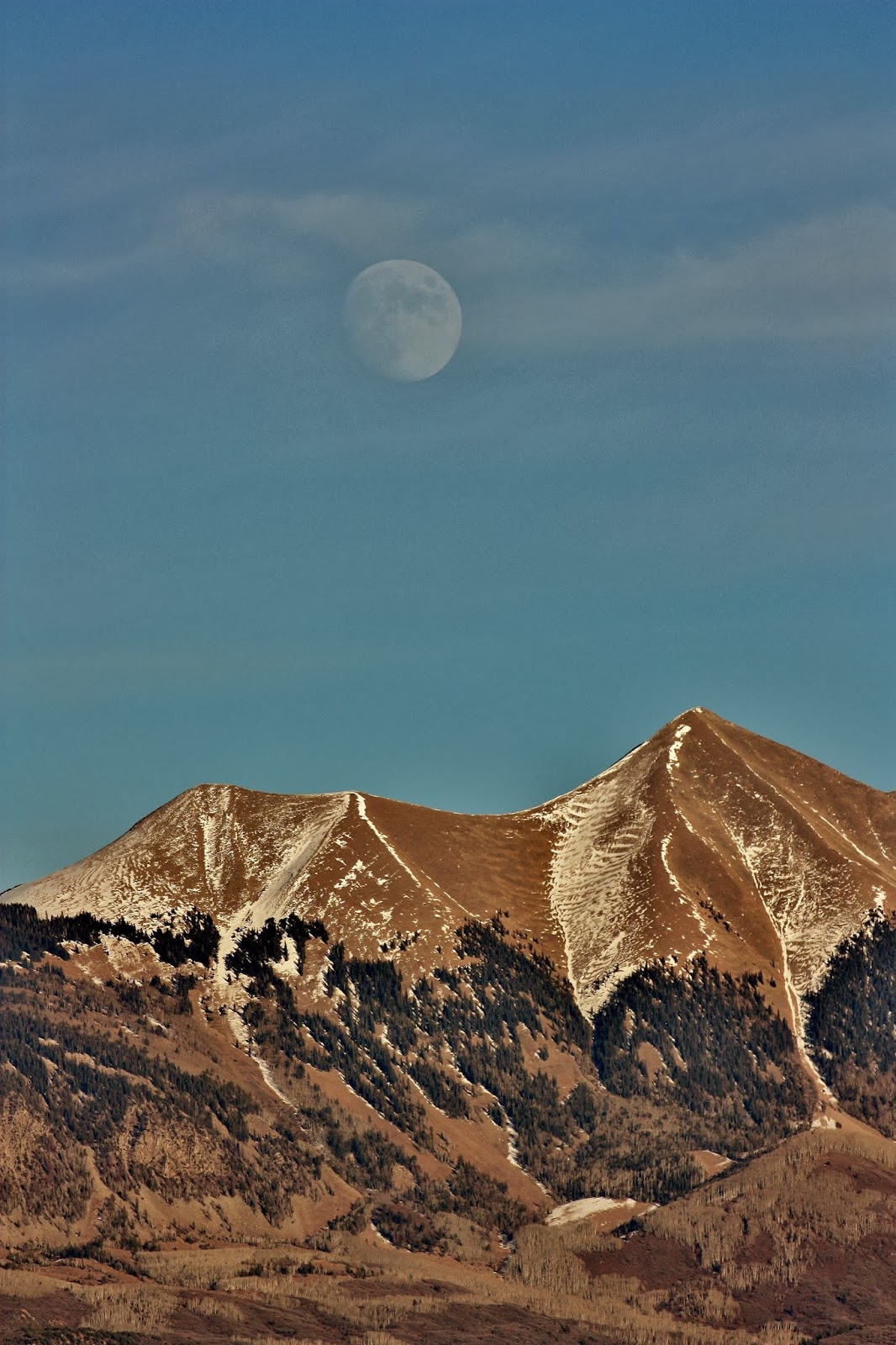 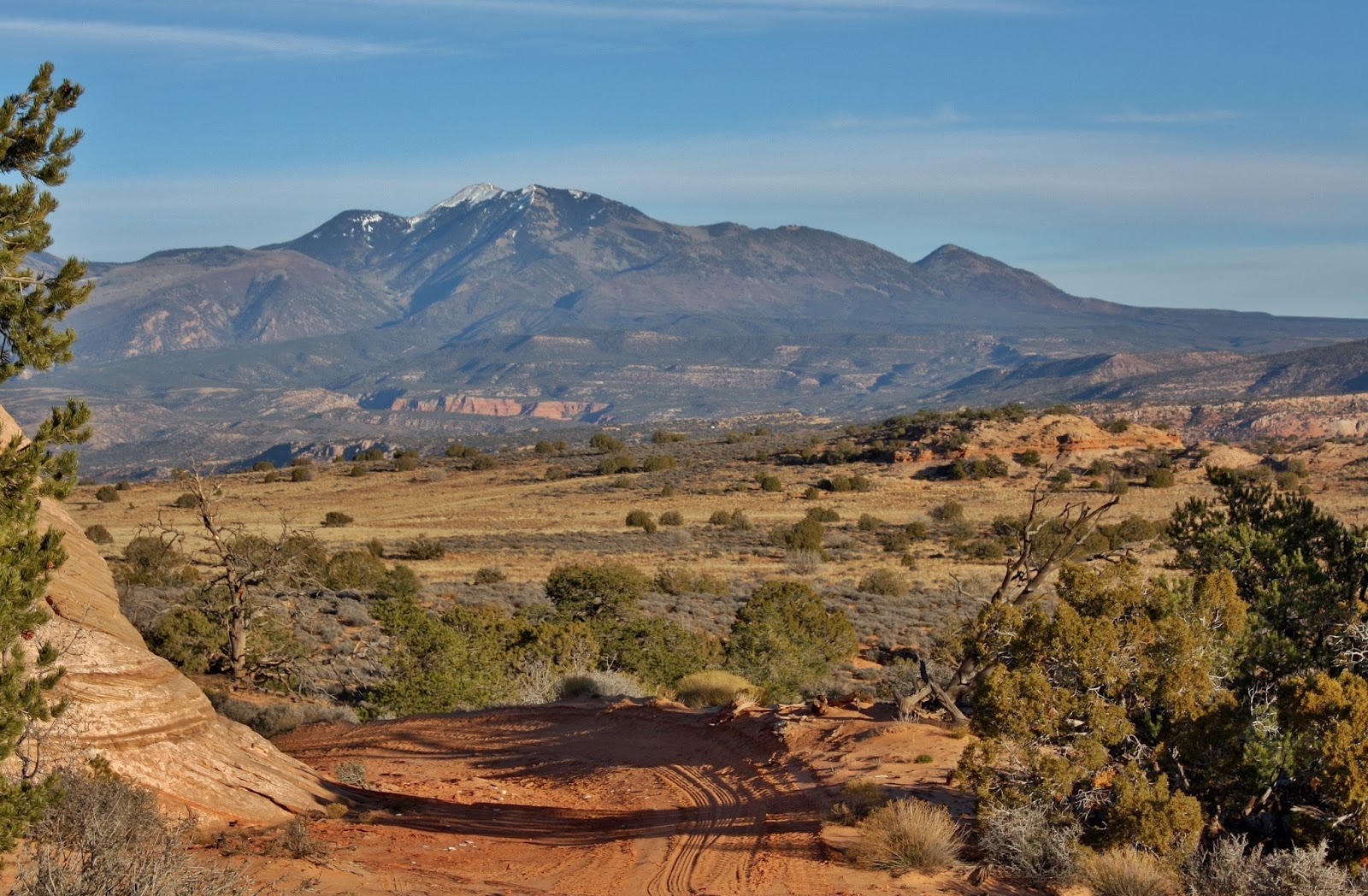 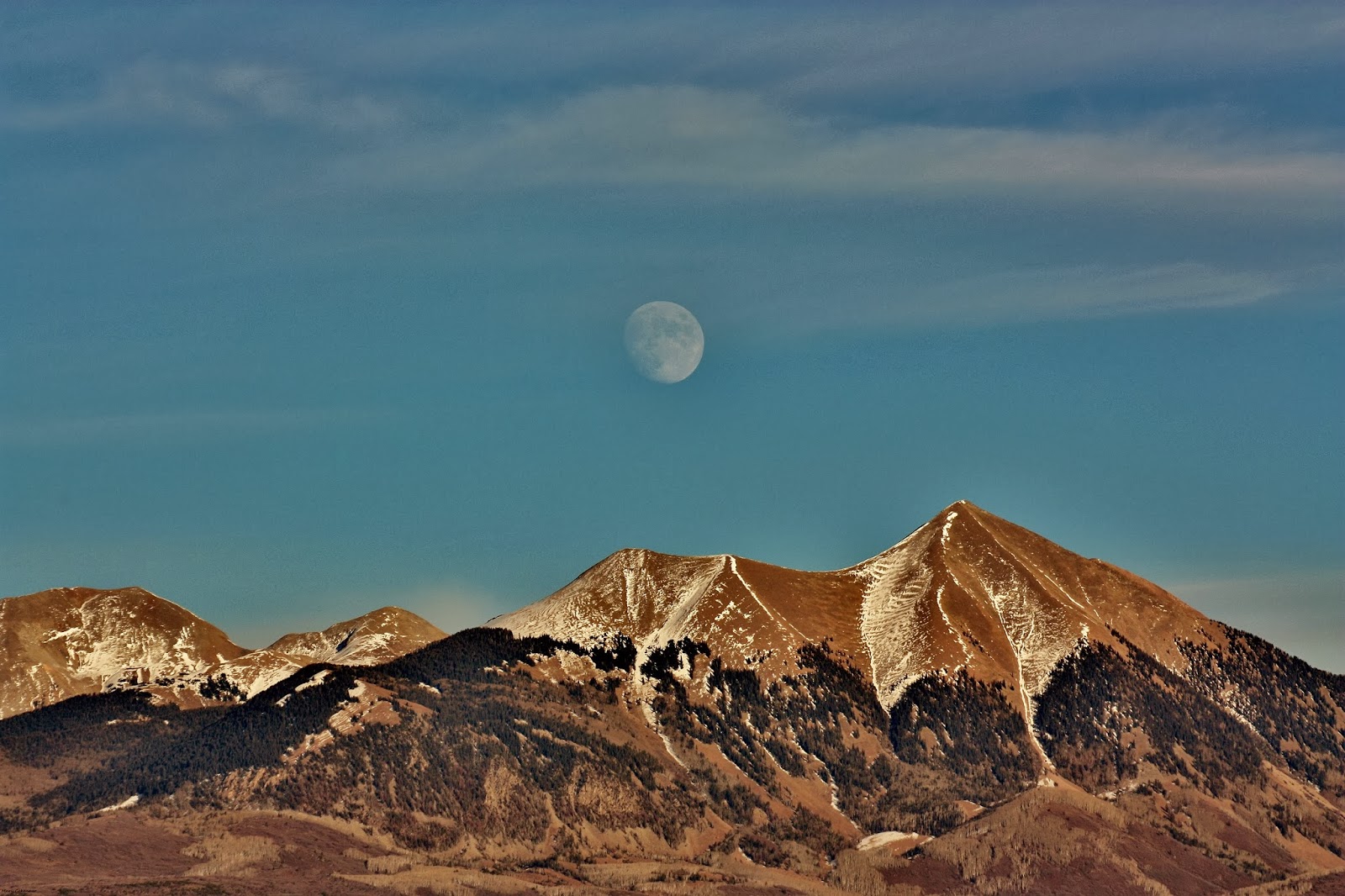 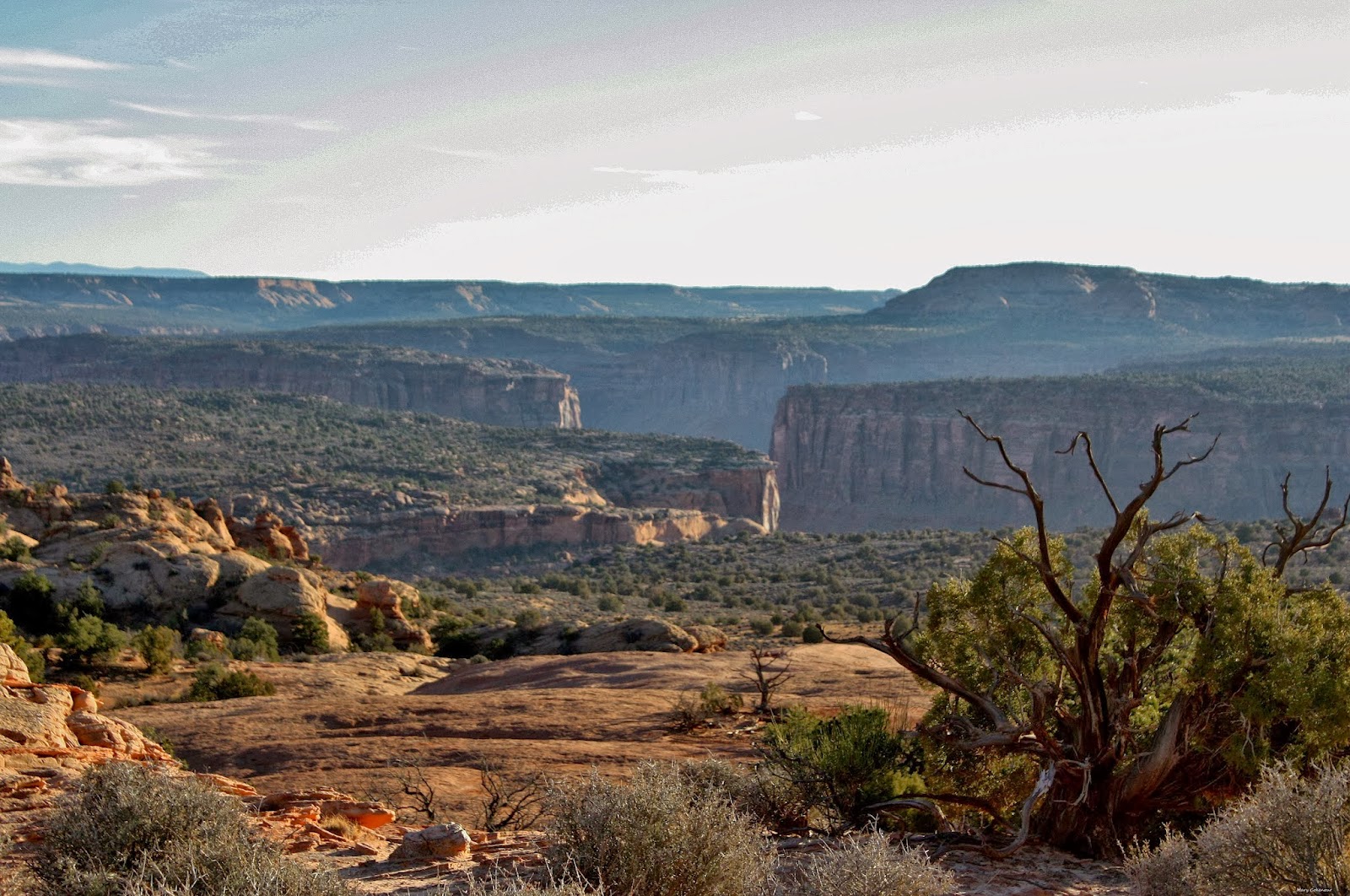 Find yourself a pull in point for your vehicle, you'll be walking from here on in.  The slickrock ledges are layered upon each other and you'll find yourself doing involuntary leaps from one to the other.  Oh, they're not difficult to walk at all, just too much fun and you will want to play.  Then there is the view of Kane Creek Canyon and Hurrah Pass in the distance; the temptation to keep walking closer and closer for a better and even better view is extremely strong. 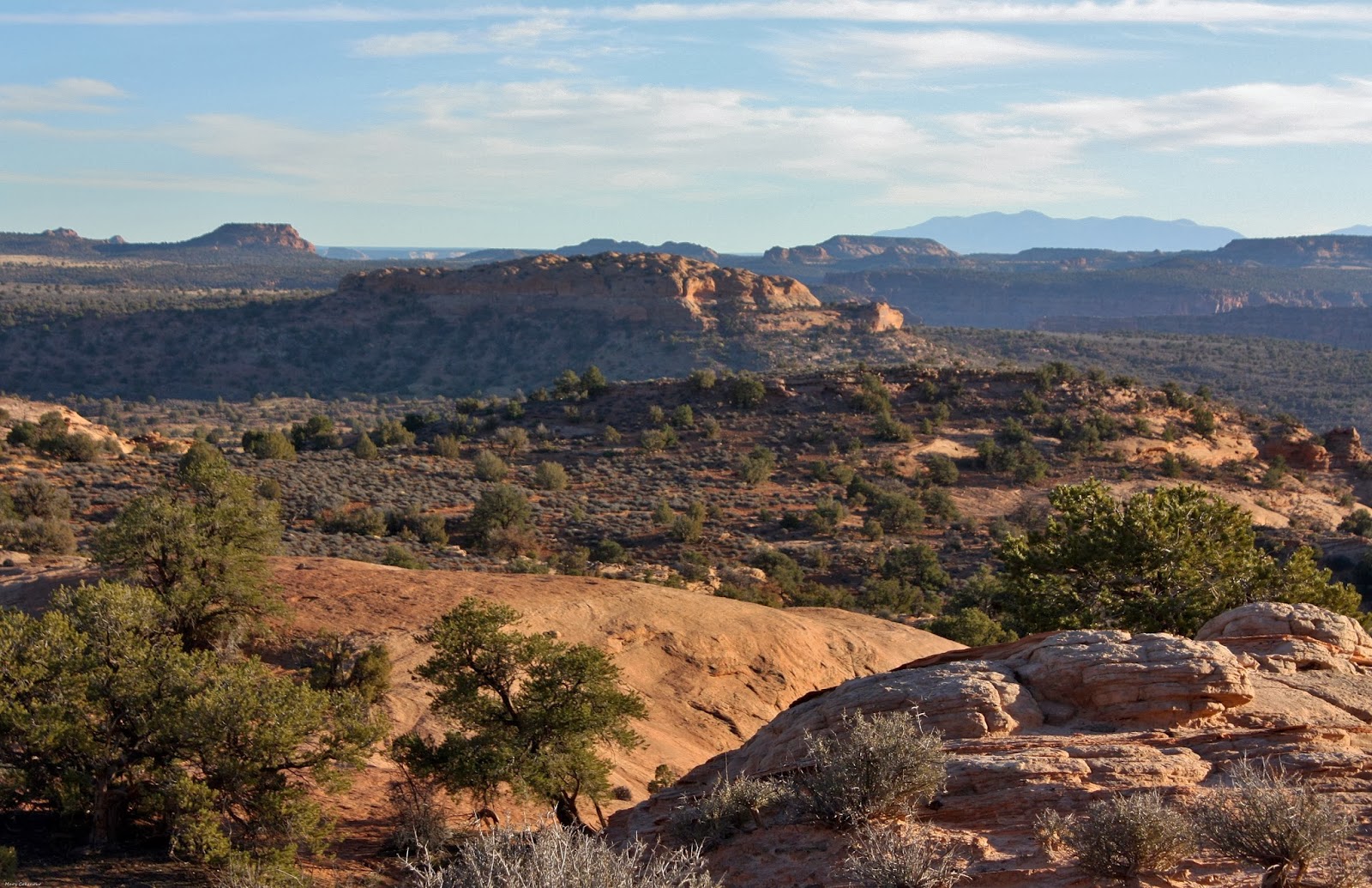 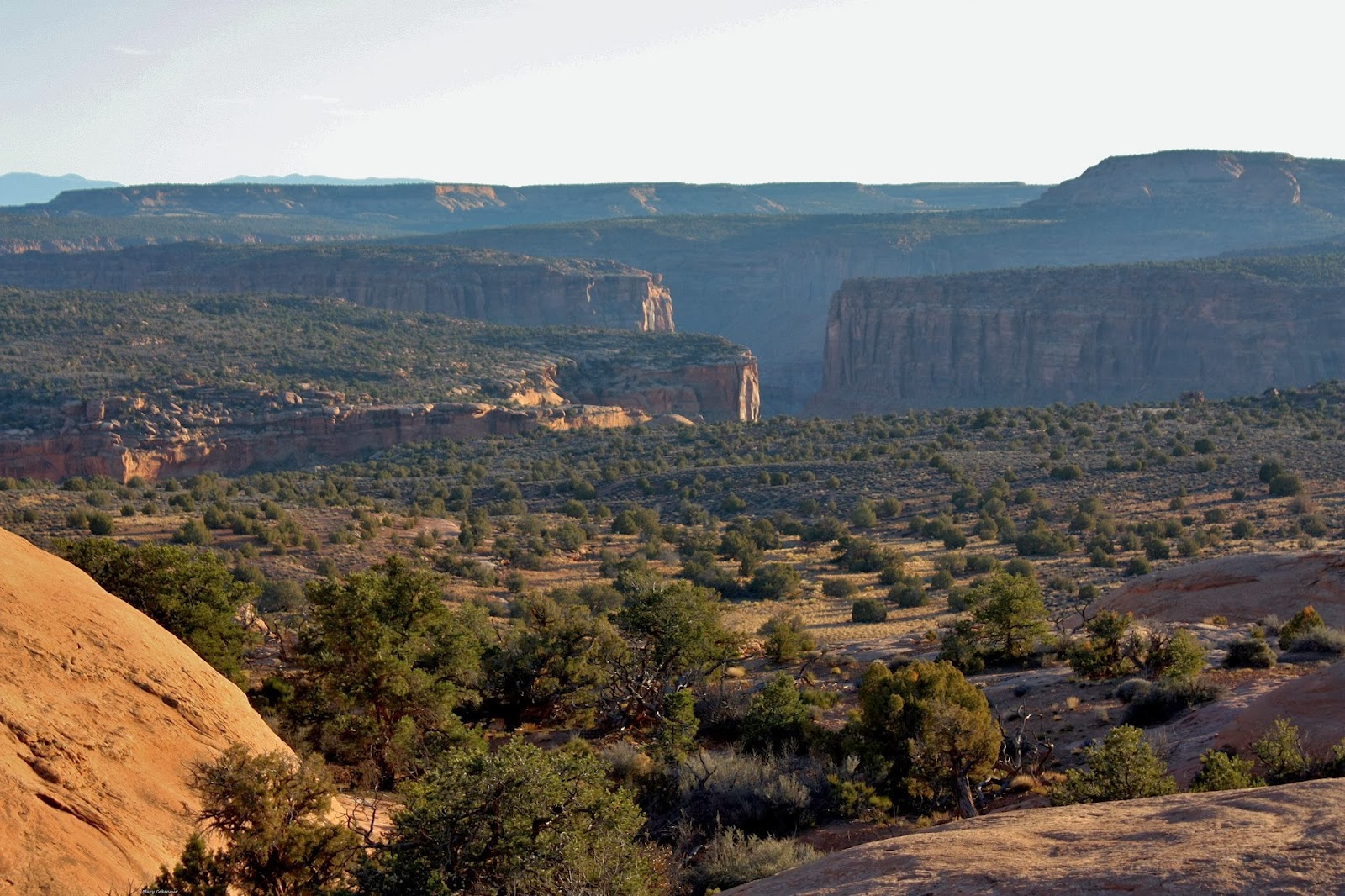 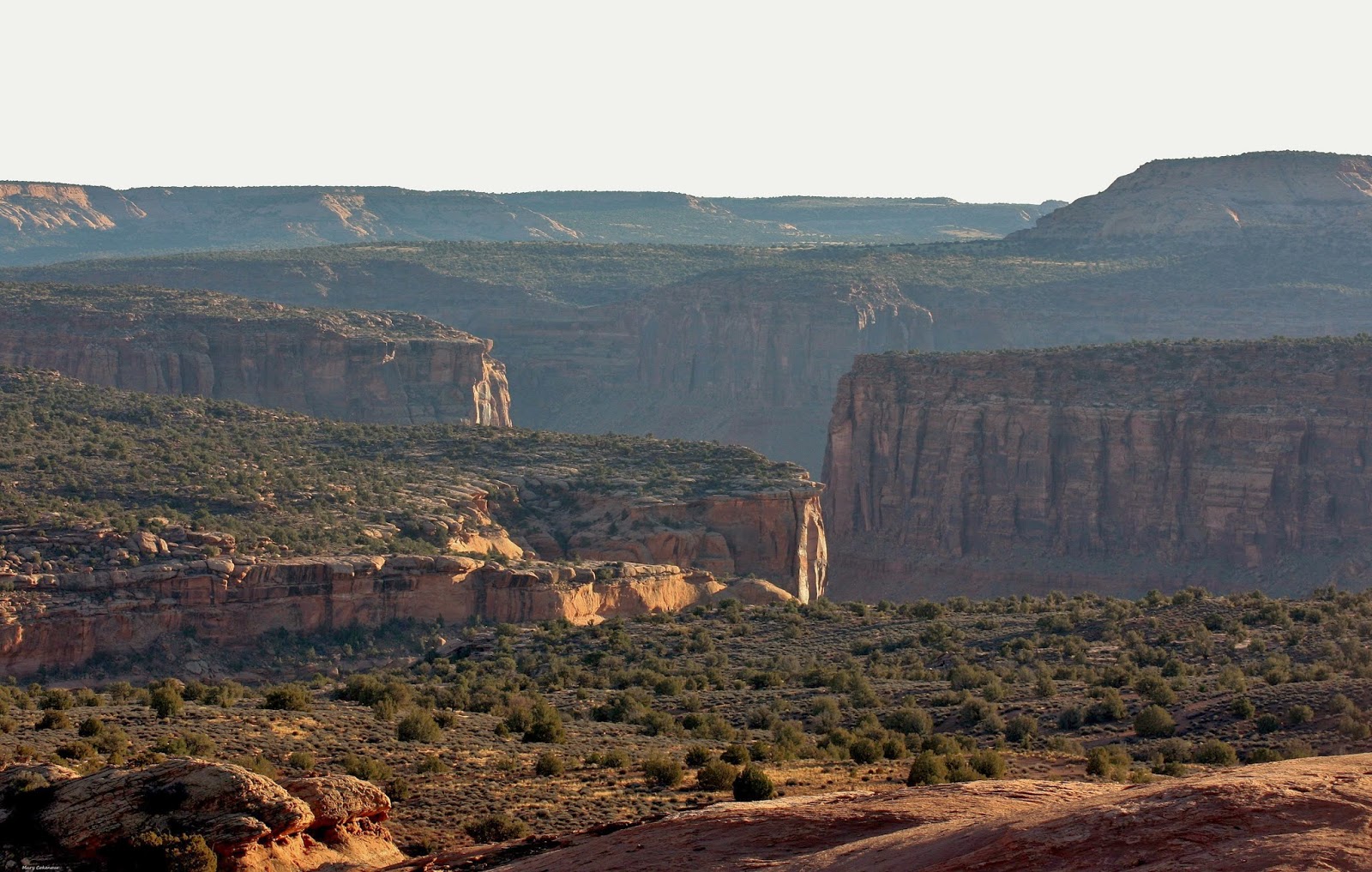 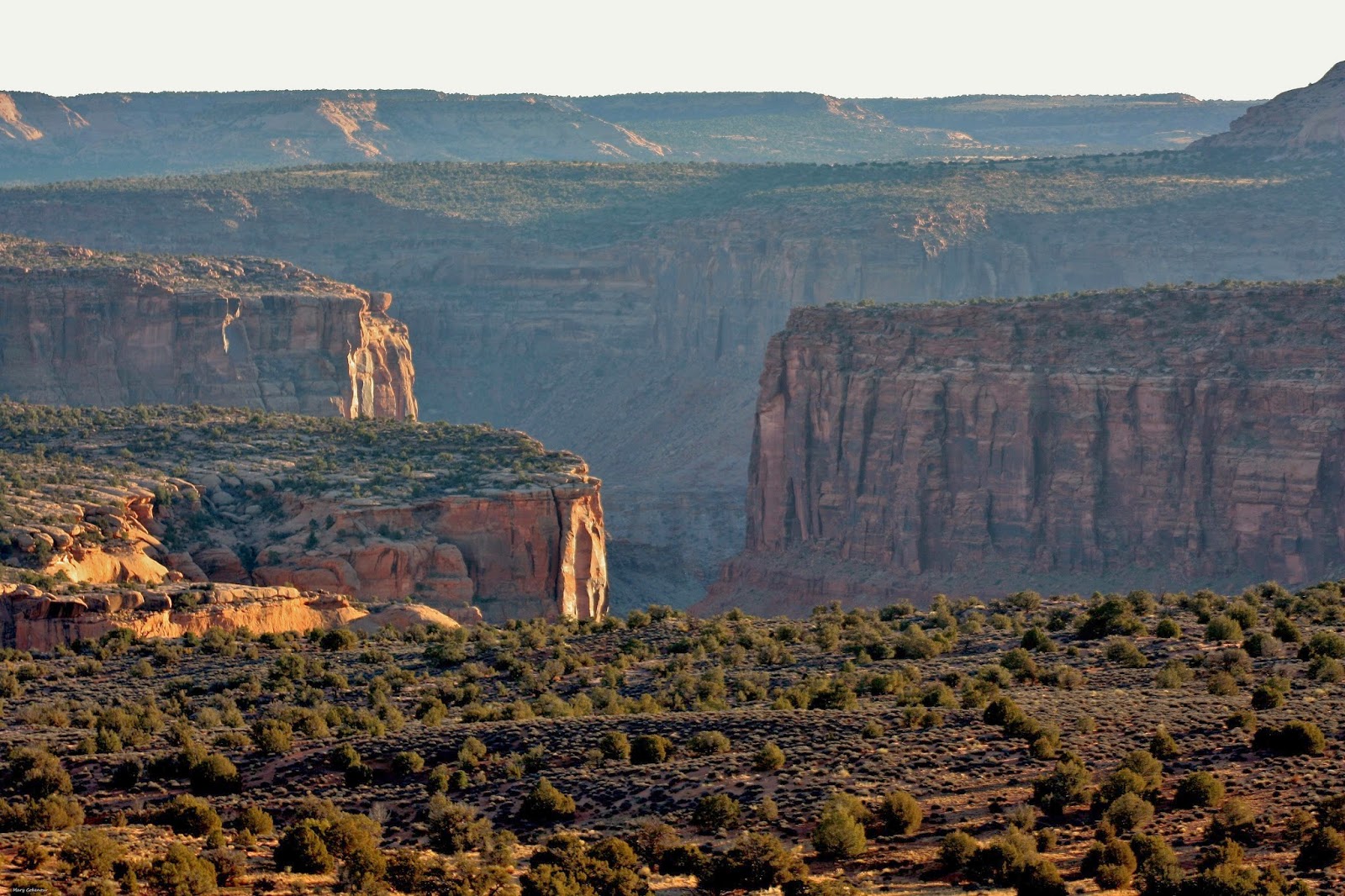 Both ATV and 4 Wheel Drive guide books warn that travel to Kane Creek Canyon from this area is extremely difficult and should not be done alone; hook up with an adventure group that holds trips to the area.  The easier way is to go via Kane Creek Blvd/Road accessible within the Moab city limits (the road that is between McDonalds and Burger King). 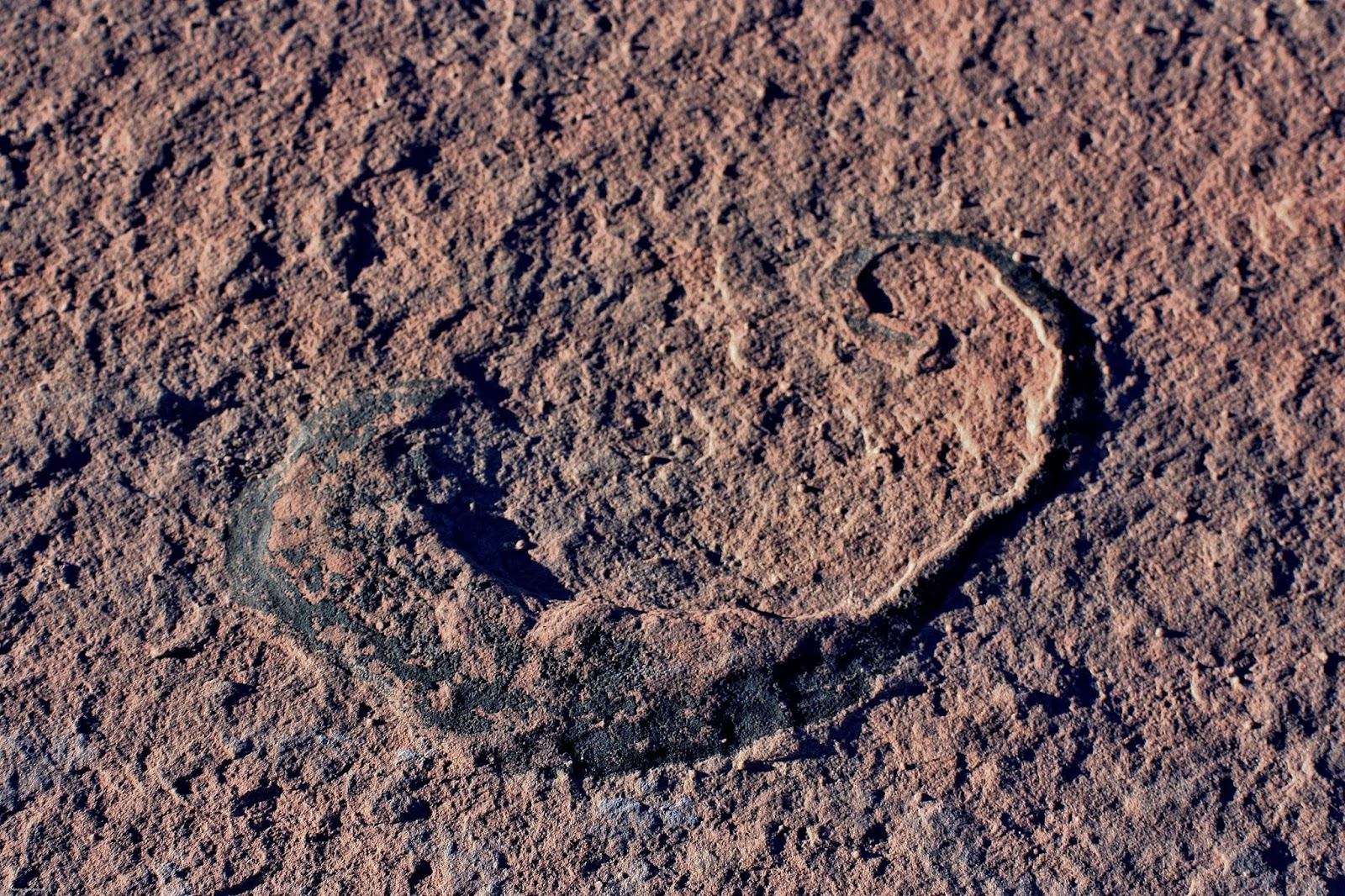 Embedded within the slickrock were a few unusual darker "figures"; resembling the remains of some prehistoric creature.  Perhaps that is exactly what they are, or maybe a darker type of rock that was naturally formed into these shapes.  Nature, by manipulating wind and water, formed the indented swirls going around the slickrock hills that are further back from the ledges.  We walked around these hills and the area back there is so quiet and serene. 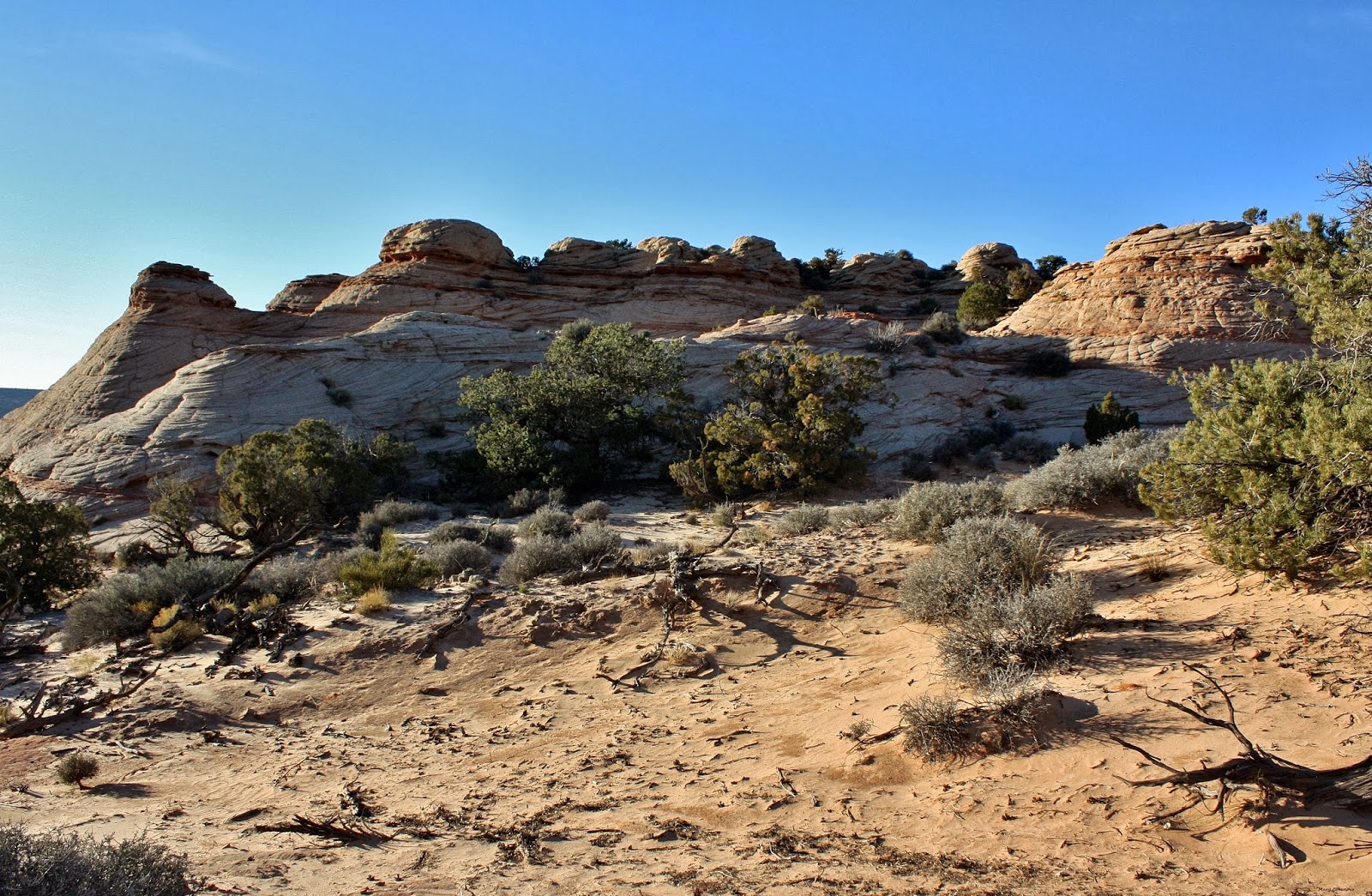 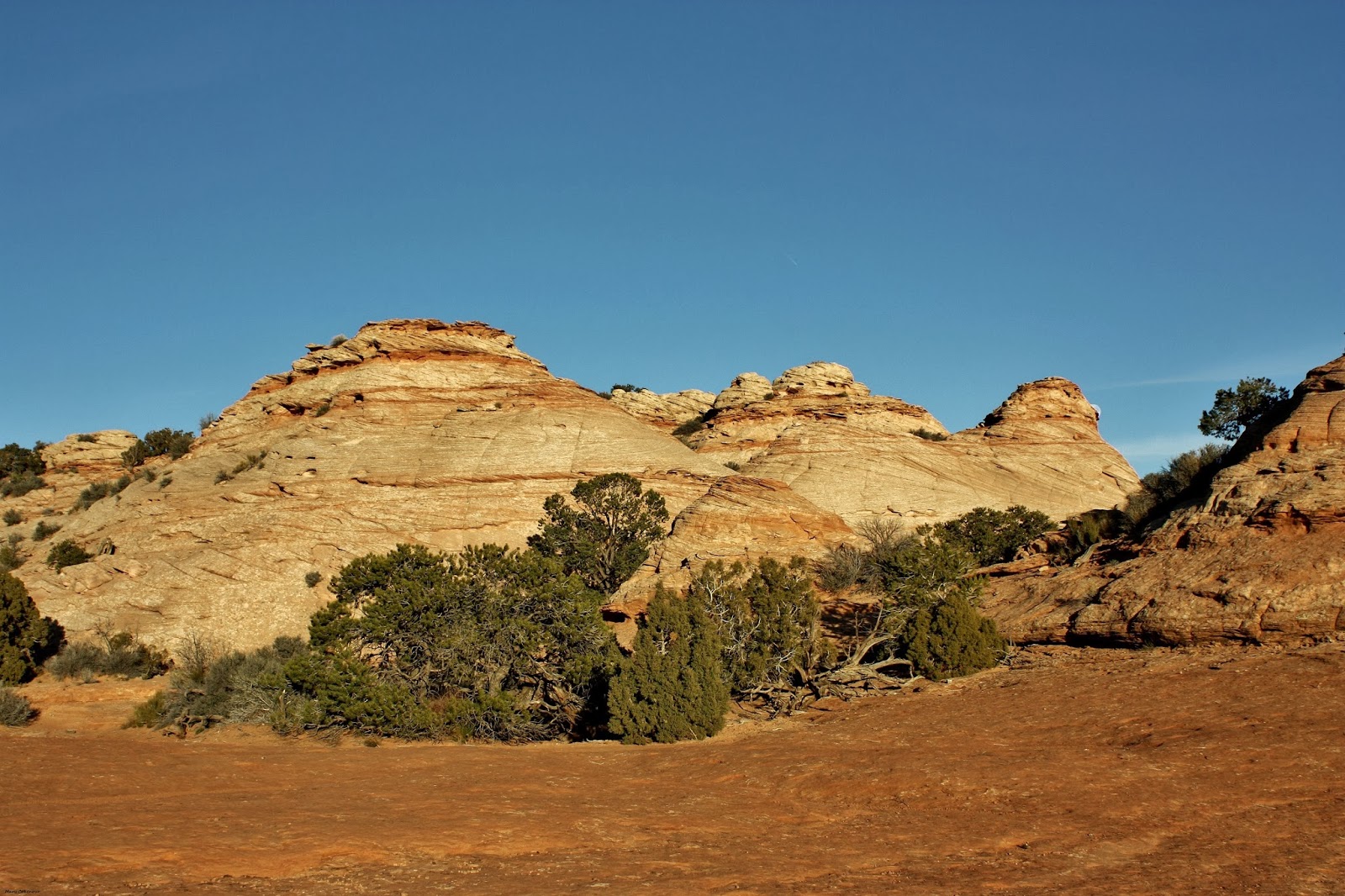 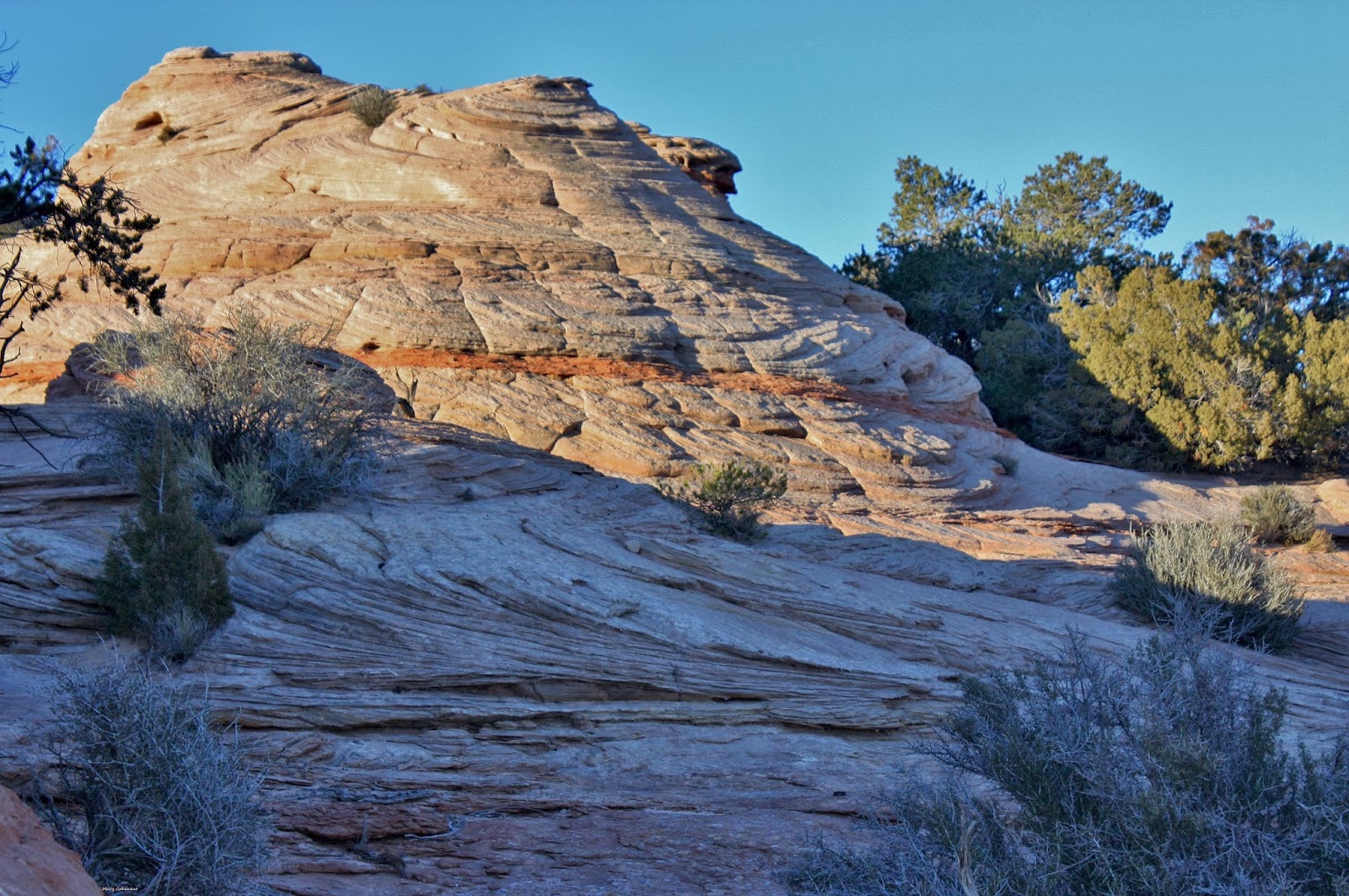 ﻿
﻿
As much as we wanted to keep walking along the slickrock, we knew that sunset would be around 5:30pm; being out here and trying to maneuver these trails in the dark is a definite "Oh Hell No!".  Just means one thing, going to have to come out here in the early morning and spend as much of the day as possible before needing to head back to Route 191.  Not a problem!
Well, that's the saga of another road with no name; well, no name on a sign at least.  Hope you enjoyed it, even if it was just through words and photos.
Mary Cokenour﻿
Posted by Mary Cokenour at 11:51 AM