Winter gave us a brief reprieve with no more snow and warmer temperatures; that is until Groundhog's Day, but that's a whole other story. Roy and I decided to do the entire SH 95 drive to Hanksville, pickup Route 24 North to Interstate 70, to Route 191 and back home...a full circle. 260 photos later, I had enough to do write ups on each of the counties we passed through: San Juan, Garfield, Wayne, Emery, Grand.  So, this one will be from where we left off at the Cheesebox and to the end of San Juan County which is just before you step, or drive, onto the Colorado River Bridge.

When we travel, we do use maps, mile markings and landmarks; yes, there is GPS, cellphones, tablets and laptops.  As much as folks like to put all their trust in those items nowadays, they often will NOT work; signals and cell towers are NOT guaranteed.  Therefore, I will be giving mile markings for particular roadways and sites to see; point zero is the gas/convenience store at the corner of Route 191 and junction for SH 95, south of Blanding.  Make sure to have food, gas and water; there will be no facilities until you either go down into Hite (general store/gas), or all the way to Hanksville (general store, gas, restaurants, motels). 24.6 -  Salvation Knoll - In 1879, several of the Hole in the Rock pioneers went to find out what lay ahead for the wagon train.  They became quite lost, and eventually ran out of food; climbing up a hill (knoll); on Christmas Day (Dec. 25th) they saw the Abajo Mountains (aka Blue Mountains) approximately ten miles away.  One of the pioneers, George Hobbs, exclaimed, "This was surely salvation knoll."; hence the name. 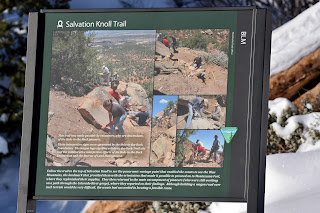 45.4 - The Cheesebox and Cheesebox Canyon; this is the best viewpoint and there is a road marker.

50.3 - The buildings are now private property; but you can explore, 4 wheel drive or ATV, throughout the canyon area.  Make sure to stay off any other private properties.


55.1 - Still in the Fry Canyon area; there is a historical marker for the desert tower known simply as "Needle". 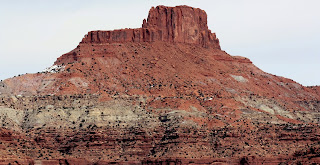 55.8 - This is the first full viewing of Jacob's Chair, but it is a broadsided view which makes it look more like a recliner.

57.7 - Here is a marker indicating Jacob's Chair, and yeppers, it looks like a chair.  It is named for Jacob Adams; a cowboy and prospector who camped at a spring within the canyon.

Around mile mark 56 you'll begin to see some unusual rock formations, however it is a curvy section of the roadway and stopping for photos is too dangerous.  At mile mark 62.6 we were finally able to park and get a few photos, this area is known as Copper Point.  During San Juan County's various mining boons (gold, silver, copper, uranium, vanadium); copper deposits were found within the area.  Amasa Lyman filed a claim, calling the area "Copper Butte", but after more mines opened, it was renamed "Copper Point".  However, deposits were so small, it became quite an unprofitable venture. 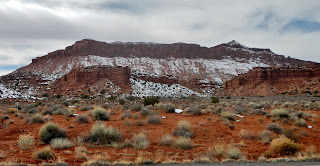 63.6 - There is a flat top mesa with a desert tower at its far end.  I haven't found any other photos or references to it; but the official green mile marker on SH 95 is 57. 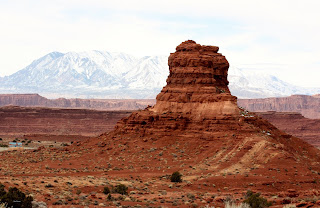 67.0 - Another desert tower, this one is more square looking; again, cannot find any references to it; when you see it, you know you're about to enter Glen Canyon Recreation Area at 67.3 miles.  At 67.4, there is an access road to White Canyon campground and Lake Powell. 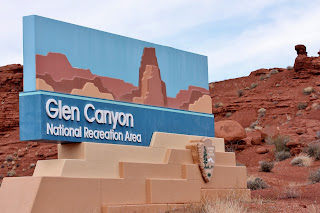 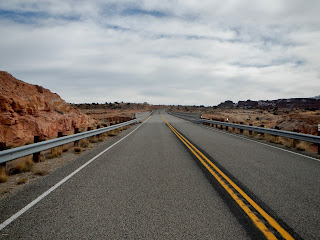 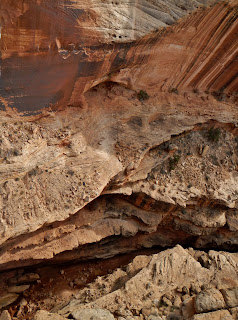 68.3 - There are pull-ins just before and just after this bridge; to the north is Brown's Rim; to the south is Farley Canyon.  Looking down, down, down to the gorge below, don't be surprised if a feeling of vertigo begins to overcome you. 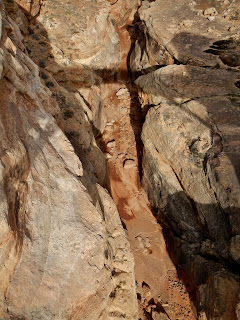 73.4 - This is the road to Hite, named after early settler Cas Hite; there is not much left of this small town as it was flooded over when Lake Powell was created.  There is a marina, general store with gas pumps, and ranger station; but for the most part it is considered a "ghost town". 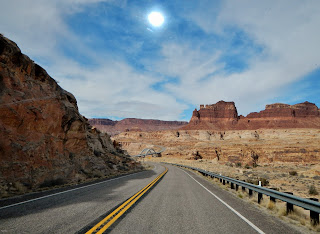 74.0 - The first sighting of the bridge over the Colorado River; at 74.4 miles, as you drive or step onto the bridge, you leave San Juan County.  However, you don't officially enter Garfield County until you get off the bridge on the other side.  Either end, park into one of the pull-in spots and walk out to the center of the bridge for spectacular views of the river and landscapes beyond. 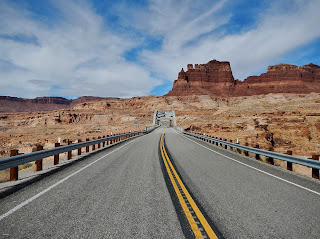 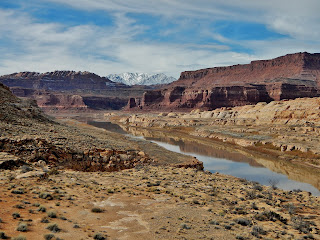 Looking southward along the Colorado River, the Henry Mountains in the distance. 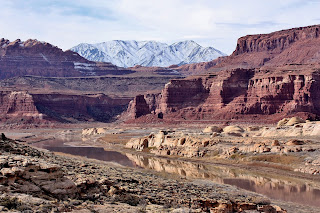 Now here is one of those landscape shots that we took, and I forgot to mark down at what mile mark we saw it.  It's somewhere between Fry Canyon and Cheesebox Canyon; hopefully, when we make this trip again, we'll see it and mark down the location.  Hey, it happens, so busy enjoying the ride that documenting becomes an after thought.

Now to go work on the photos for the next section of the State Highway 95 trip, Garfield County.