We Almost Died at Pucker Pass.

Sounds like the potential for a good western, but yes, we almost did.  Pucker Pass is appropriately named for two reasons; #1 - the cheeks of your ass will pucker up together; #2 - pucker up your lips and kiss your clenched ass goodbye!  So, lets get on with the story...

Long Canyon Road is a 4 wheel drive trail off of Potash Road (Route 279) just north of Moab.  (Click Here for map.)  We had attempted to drive this once before, but a thunderstorm had driven us out of the canyon; getting caught in a flash flood is not on our to-do list.  After the snowstorms that blanketed Grand and San Juan Counties between December 23, 2015 and New Year's Day of 2016; the end of January barely showed a dusting left upon the red rocks.  What do I and Roy decide to do after being cooped up in Monticello?  Sure, lets go gallivanting in Moab; as Roy puts it, "Lets go up into Long Canyon and to Pucker Pass", she said.  "It will be fun.", she said. 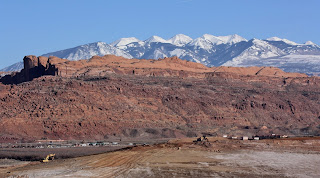 At the beginning of Potash Road, the Atlas Mine Tailings Project is still in full swing.  The removal of the uranium tailings began in 2009 and is not projected to be finalized until 2025.  It's also at this start of the road that you can get a good view of Arches National Park and the La Sal Mountains beyond.

As soon as you see Jug Handle Arch, make the right hand turn over the railroad tracks; this is the beginning of Long Canyon Road.  Depending on whether it was a shady area, or directly sunlit, the wet (snow/ice) or dry of the dirt trail varied. 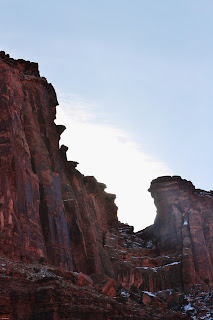 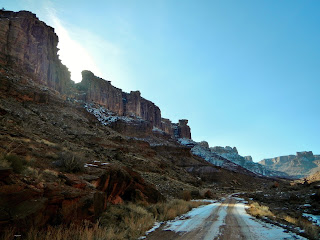 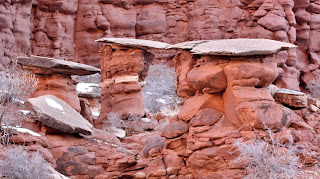 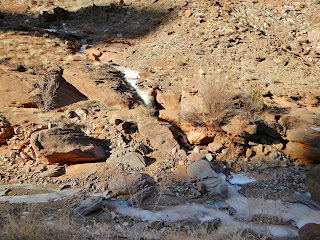 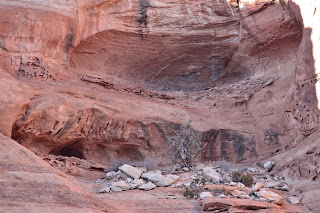 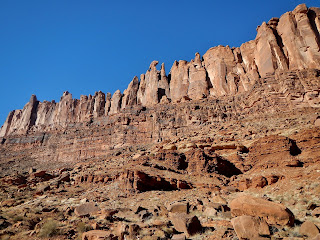 The spires along both sides of the canyon are awesome!  At one point, I spotted a rather unusual formation on top of one.  Taking a close up, well, I have found it....the Eye of Sauron (Lord of the Rings reference, in case you didn't understand) which means we were near Mount Doom, so no wonder we almost died! 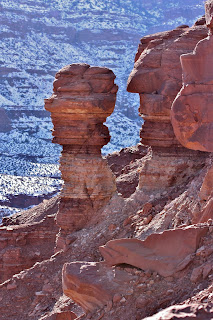 Passing by two formations, I know one is called "Balanced Rock" on the maps, but the other, well with the rocks behind it, it looked like a side view of faces.


We had previously seen a sign that this was a "mountain sheep" area, and what do we see as we are climbing upward? Three mountain sheep, but before I could get a shot, they bounded over the ridge.  Up around the corner was a dry pull-in area, so we stopped and looked for them, but those fast little buggers were no where to be seen.  However, the view from this point was breathtaking! 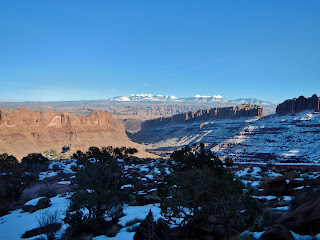 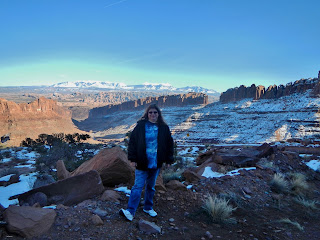 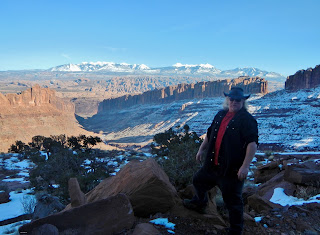 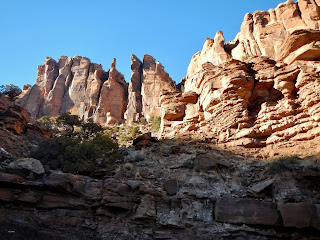 Break time over!  Back into the FJ and upward it was again; around the next corner we saw the spires up close and personal; and then we saw the condition of the shaded road ahead.  Now you would think we'd turn back at this point, but no; I did tell Roy, "You know, if you aren't comfortable with this, we can turn back."  However, as he told others, I was using "Ninja Woman Logic" on him; while I was saying, "You can turn back."; he said I was loudly thinking, "If you're scared."  Scared!!??!!  Well he had to prove that definitely was not happening, so we continued on.  The way up wasn't that bad actually, it was the way down later.....oh boy. 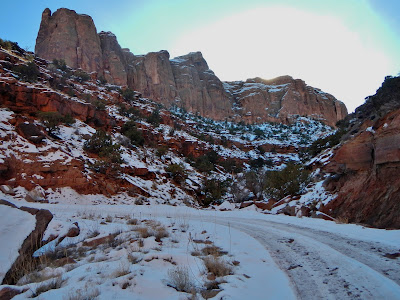 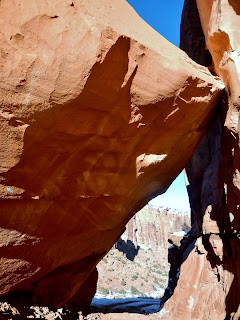 Finally we reached Pucker Pass and our vehicle was small enough to fit through.  If you happen to be driving an overcompensation huge vehicle, don't plan on driving through, or maybe you want to get stuck inside the rocks?  On the other side the road became very steep and was a sheet of ice.  Nope, we were not continuing onward; if we had, we would have come out on Route 313 which is the road to Dead Horse State Park and Canyonlands - Island in the Sky.  Sure, what's a little snow with ice, but all ice...no, no. 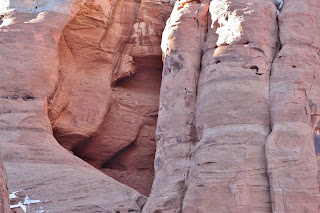 Caves across from Pucker Pass. 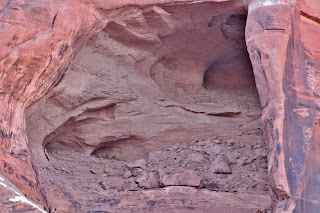 Now it was the descent back down the road that we ran into trouble, and it wasn't even on a decline.  We were traveling on a flat section of road when I suddenly heard a grinding sound.  I thought there was something wrong with the engine; no it was our rear wheels sliding against the ice.  The rear of the vehicle began turning towards the edge of the cliff, but Roy was able to get it back on track with a little give and take on both gas and brakes.  We stopped at the dry pull-in area, and yes, we were shaking like leaves in a hurricane.

I said to Roy that if we're going to do things like this, then maybe we should consider putting the chains on the tires first.  He says, "Oh, they're in the back of the FJ."   He was standing near the edge of the pull-in and was lucky I didn't push him off.  Then again, he didn't get too upset when, after we straightened out on that icy section of road, I said, "Wheee, lets do it again!!!".

So, that's the story of how we almost died at Pucker Pass.  As soon as it gets warmer, and the road is completely dry, we're going to do it again and drive all the way to the end.  Can't leave an adventure uncompleted, can we?

Posted by Mary Cokenour at 2:04 PM