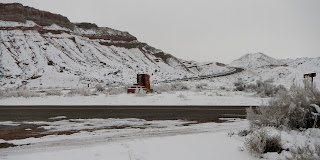 There we were, the crossroads of Capitol Reef National Park; one road leading upward towards Notom, upward into the clouds that is.  Route 24 leading straight on through the park, eventually to the small towns of Torrey (and Scenic Byway 12), Bicknell and beyond.  Frosted bushes, tall grass and tree limbs gave a starkness to the landscape resembling black and white photos.  We stopped at the restroom area and got our bearings at the map/informational board outside.  Decision was, keep going and make the best of it; have fun and enjoyment no matter what! 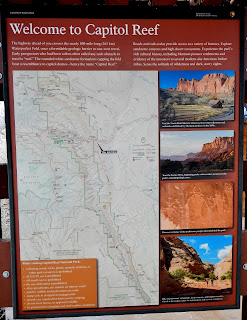 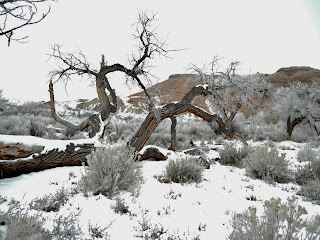 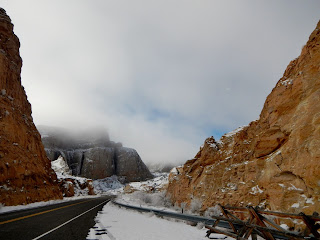 Even with the snow, frost and cloud cover; our heads swiveled side to side as we tried to capture the beauty of the rock formations on either side of the roadway. We took advantage of every pull-in area (there are many) to get out, take photos and breathe in the clean, crisp air.  Route 24 does have many twists and turns, as any roadway in Utah; the roads are formed around the landscape, the landscape is not destroyed just to make a straight road.  It was around one turn that we suddenly saw it....a patch of blue sky peeking through the clouds.  As we continued on, the clouds were disappearing as blue sky took over, and sunlight, 14 degrees Fahrenheit, no wind, and glorious sunlight.  Mother Nature decided to put on a fabulous day for us after all; we had passed her tests, shown resilience and were rewarded!!! 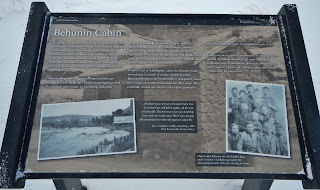 The park service put up informational signs and boards at major points of interest; while the paved areas were snow free, the hiking trails were not, the snow either coming halfway up our hiking boots, if not almost topping them.  A plan of coming back in the warmer months has already taken hold, walking all the missed trails are a must!  Our first stop of interest was the Behunin Cabin; Elijah Cutler Behunin and his family lived in the cabin from 1883 to 1884.  After one year, they moved to Fruita after flooding threatened to destroy the cabin and fields.  Originally, he and his family were one of the pioneer families to settle Cainesville in 1882, but were forced to move out in 1883 due to rampant illness in the town, and flooding. 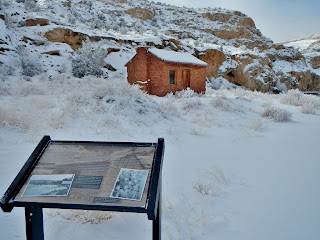 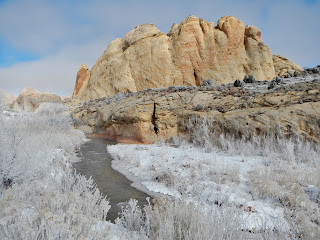 Paralleling Route 24 is the Fremont River; beginning at the Johnson Valley Reservoir, which is located on the Wasatch Plateau near Fish Lake, the river flows southeast through Capitol Reef to meet the Muddy Creek near Hanksville.  These two rivers combine to form the Dirty Devil River, a tributary of the Colorado River.  All in all, the Fremont River is, itself, 95 miles long.  The river was named for explorer, John C. Fremont, and strangely enough, the culture (an offshoot of the Anasazi culture) that had resided in the area was named after the river; the Fremont Culture. 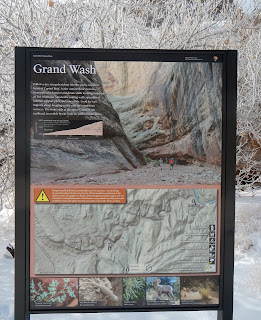 Grand Wash was one of those trails where the snow was just too much to go hiking through; there is a scenic drive road that can be accessed at the Visitors Center which leads to a short driving trail into Grand Wash (Cassidy Arch is nearby). Definitely on the to-do list for next trip to Capitol Reef! 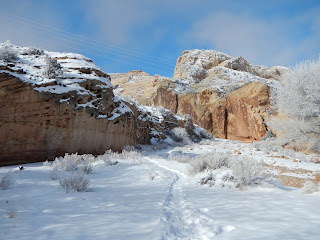 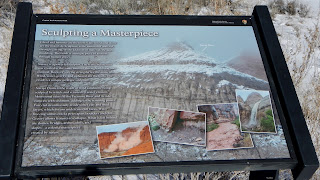 Capitol, aka Navajo, Dome is another beautiful area; the dome was sculpted by nature's wind and rain.  The resemblance to the Capitol Building in Washington, DC, to the early settlers, gave it the name of "Capitol Dome"; Navajo Dome refers to the Navajo sandstone it is formed of. 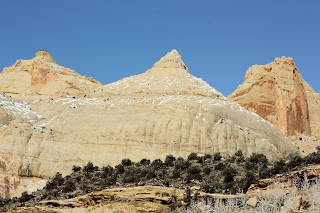 We skipped the Hickman Bridge trail which leads to ruins and a natural bridge due to the snow. It's a one mile trail leading upwards 400 feet, sliding down wasn't on the to-do list for today....definitely on the list for the next time though! 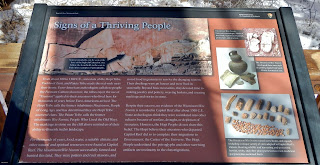 Now the Petroglyph walls are a must do!  These rock wall writings have been traced back to the Fremont Culture; the same culture which resided in Nine Mile Canyon outside Wellington, Utah.  On one of the informational boards is a copy of a painting by artist, Joseph Venus; who happens to be a friend of ours.  Hi Joe!!!  He has done extensive artwork regarding the Fremont Culture, especially in the Nine Mile Canyon area. 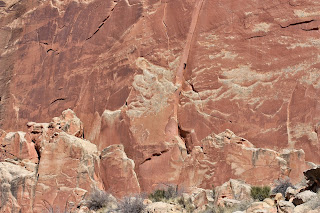 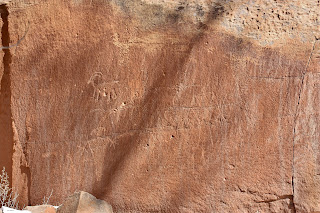 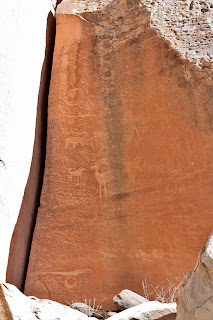 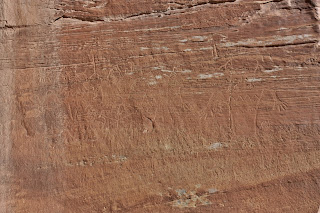 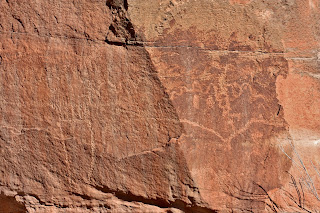 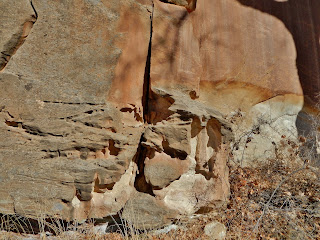 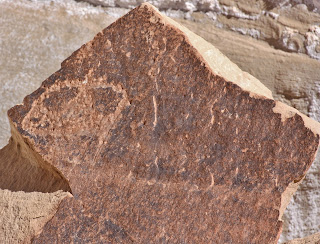 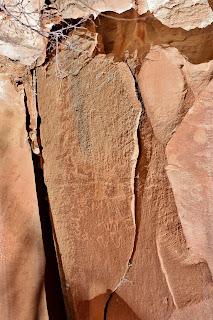 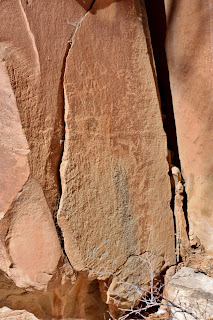 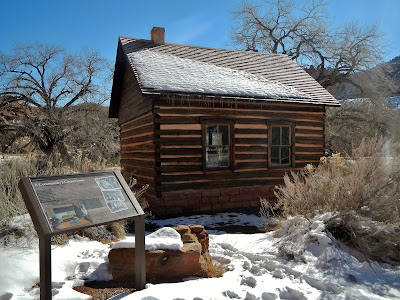 Just down the road is the original Fruita School House; built in 1896, it acted as the church meeting house as well.  It closed its door in 1941due to the diminishing population of Fruita; any school aged children are now bussed to other schools Wayne County. 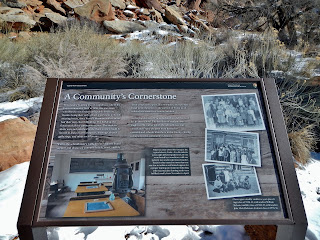 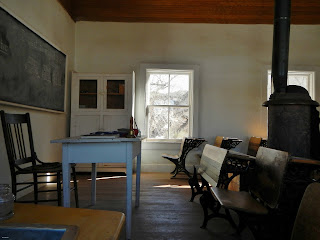 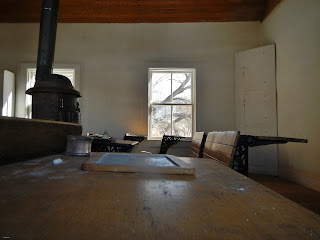 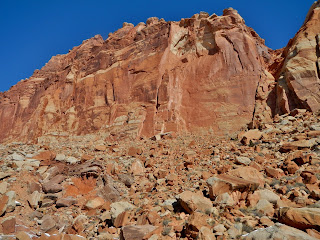 In the same parking area as the school is a small petroglyph area; the writings are very faded, so might be difficult to make out at first.  As with any ruin or rock art site, do NOT touch, do NOT deface, do NOT leave any trace of yourself. 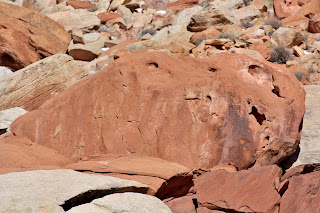 ...and this is where part one will end. Part Two will begin with a tour of the Visitor Center; another one of those must dos when at Capitol Reef.