The Journey To, and From, Capitol Reef.

From Monticello, Capitol Reef National Park is about three hours away; give or take depending on how often photographic stops are made along the way.  Since we'd already done State Highway 95 twice in January; heading to Capitol Reef directly was the goal.

We started out at 7am on a beautiful, clear morning; that is until we reached Cheesebox Canyon and saw the cloud cover over the highway.  As we drove, we wondered out loud if we should continue; checking the weather forecast at the Reef told us it would get better.  The awesome rock formations and canyons we were used to seeing were nowhere in sight as we drove; dense white allowed us to see about twenty feet around the vehicle. 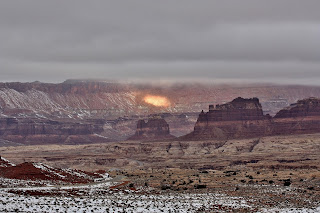 We were finally at the rise that overlooks the Colorado River bridge (San Juan and Garfield County border) when we were given our first sign to continue....a ray of sun acted as a spotlight, urging us onward.  I believed that Mother Nature was on our side today; our resilience being tested and we would prove worthy.  We continued and when we reached the Dirty Devil River campground, the lit up area on the rock wall was nearby. 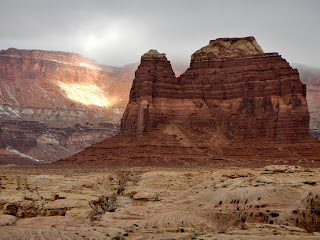 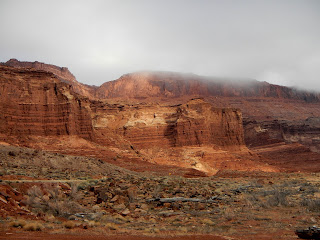 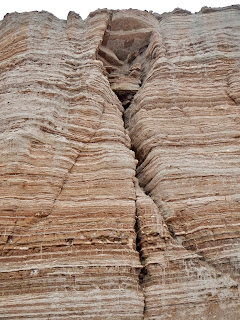 Approaching Hanksville (Wayne County), we could barely make out the town or the North Cainesville and San Rafael Reefs seen from it.  We gassed up at the Shell Station that is at the western end of Hanksville (Route 24 West); ignoring the snowflakes lightly coming down.  We only stopped twice for photos; any wonders higher than 500 feet were cloud covered.  I took one closeup of the etched rock walls; lines of gypsum running through them.  The second stop was at a rock building protected by chain link fencing; this was settler's home from 1883 in Cainesville.  A brief history of Cainesville's settlers can be found Here; between disease and flooding, this area ended up being eventually abandoned. 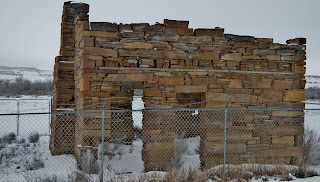 Nope, we had no intention of giving up; we looked at the cloud cover as a challenge!

Another hour went by, and there it was, the sign post indicating Capitol Reef and what was located along the two roadways at the junction.  And we....


...."what, what, what did you do???",  is what you're probably asking at this point.  We had the most fabulous time at Capitol Reef National Park, that's what!!!  However, the entire post about the park will have to be for my next posting; that's right, I'm going to keep you in suspense.

But I'm not that nasty, on the way back home, we traveled Route 24 East to Hanksville and then back along State Highway 95.  The ominous cloud cover was almost fully lifted, so what we missed going to the park, we got to enjoy on the way home.  The sun shone brightly upon the Cainesville Reef; a moon scape of gray and black hills were revealed (hence the name of the Luna Mesa RV Campground). 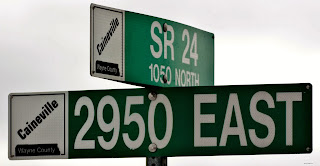 At another point (the photo of the sign post gives the location), a giant had left his hiking boots upon the crests of the hills above. 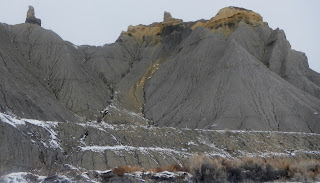 When we first came through, we had no clue any of this was high above us, or in the distance.  Our next stop was Factory Butte and while the clouds still covered the very top of the butte formation, the rest of the area was revealed.  This is an OHV (off highway vehicle) recreation area which does allow camping and hiking, and seems to be extremely with motorized dirt bikers.  As far as we were concerned, we were on the Moon, the Earth left far behind us. 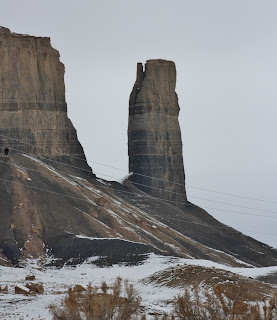 East of Cainesville we stopped to take photos of this black/gray stone tower; as we passed it though, we had to take more photos as it now resembled a mitten; like you would see down in Monument Valley. 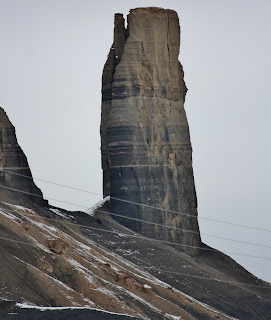 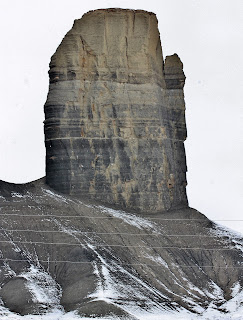 In Hanksville, the sky was now clear and blue; however, Route 24 going northward was still cloud covered; it was simply easier to head on home along SH95.  So, we left at 7am, got back to Blanding around 4:30pm and treated ourselves to burgers and curly fries at Patio Drive-In.  A most awesome day; remember though, I still have to tell you about the rest of our day and the fun we had at Capitol Reef.