A Winter Gallivant Along State Highway 95.

Between Dec 23, 2015, and the first week of January, 2016; San Juan County was slammed with winter storms; where I live, in Monticello, got about 4 feet.  No area was spared, not even Monument Valley which is usually much warmer than the rest of the county.  So it was no surprise that, as soon as main roadways were finally cleared and clean, Roy and I would get out of the house to go joyriding.  First we stopped in at Patio Drive-In to pick up lunch which we happily munched driving along State Highway 95. 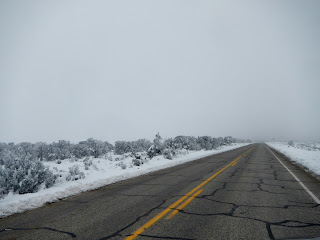 As we turned onto the highway, we became surrounded by cloud cover; we could see easily down the pavement, but the landscape was not as discernible.  Snow and frost covered trees, bushes and tall grasses; we were traveling through a mysterious, arctic wonderland.

Snow streaked Comb Ridge loomed starkly against the grayish-white sky; as we drove through the pass, we noticed more current rock fall. 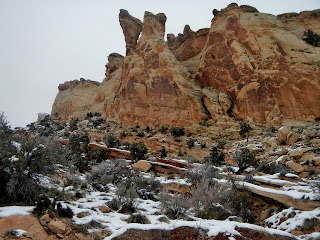 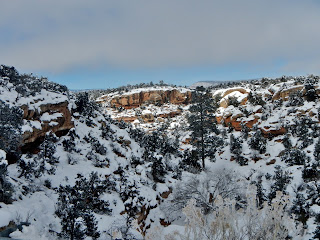 The various canyons along the way were heavily laden with snow; icicles hanging from tree branches. 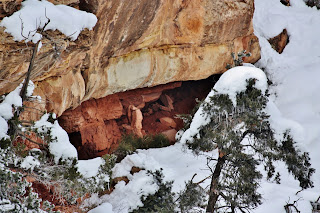 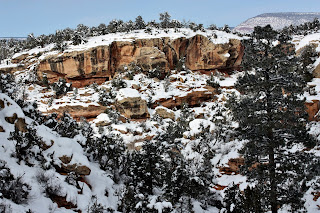 It wasn't until we'd passed Natural Bridges, Cedar Mesa/Grand Gulch, the Abajo Mountains, and hit open range again that we found ourselves surrounded by sunny, clear sky; instead of being shrouded in clouds. 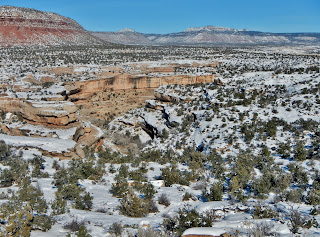 White Canyon was barely recognizable with the snow lying within it; we couldn't even make out the slickrock, embedded with crystals, we enjoy walking upon. 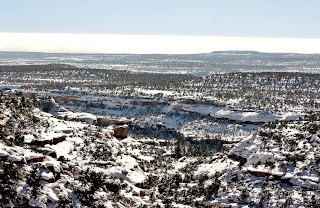 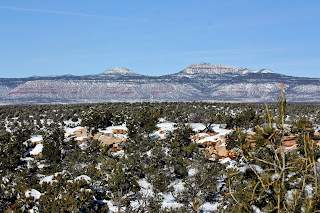 Looking back, Bears Ears were more discernible; it's only at certain points that their similarity to actual bear ears can be made out. 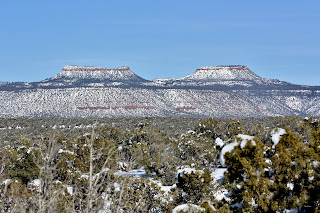 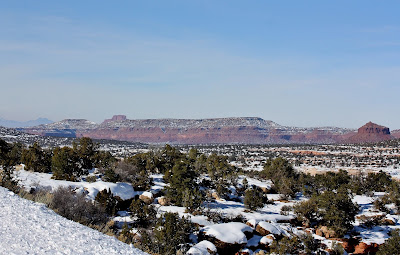 Continuing westward, The Cheesebox, Jacob's Chair and the Henry Mountains were slowly coming into viewing range.  We drove as far as Cheesebox Canyon when we noticed the gas gauge was at the halfway mark.  Decision making time; did we have enough gas to get us to Hanksville, or turn around and head back to Blanding?  As adventurous as we are with exploring, hiking and climbing; running out of gas was not on our to-do list, so back to Blanding we went.

On the way back, we saw another snow laden canyon looking so beautiful in the sunlight. 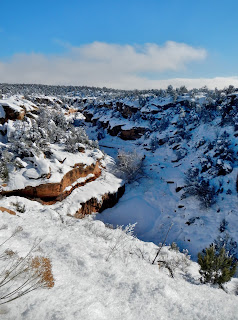 Closer towards Blanding, Sleeping Ute Mountain appeared; the body of the Ute Chief floating upon a bed of clouds.

Even though Southeastern Utah is classified primarily as a desert area, do not be fooled; it does go through all four seasons. So, if you come out here, in the winter, expecting to traipse around in shorts, tank top and flip flops....SURPRISE!!!  Yeah, that would be a big NO!!!