During research on the Moki Dugway, I found many people writing about how this is a "terrible road to drive upon", "very dangerous", "too scary"; I had to sit and ponder over where they were talking about.  We've been on the Moki Dugway and it was one of the most awesome treks we've taken on a mountain road in a long time.  I would rather drive up and down the Moki than go on any rollercoaster ride in the United States; yearly statistics state it's safer also than an amusement ride.  With the Moki, the drive is exhilarating; the scenery below (Valley of the Gods) and in the distance (Monument Valley and Cedar Mesa) are divine; windows open to fresh, clean air, yelling "Wheeeeeeee" as we made the turns and headed further downwards; getting to the bottom and saying, "That was fun!!!  Lets do it again!!!!"

So, let me give you a warning, disclaimer, whatever you want to call it right now about the Moki Dugway; and if you are still too afraid to drive it after I do the entire write up and post my photos...*sigh*...I'm sorry, but I have no respect for you (this excludes people with a phobia of heights of course, that's a whole other issue).

Warning, Disclaimer, Whatever...
The Moki Dugway is one of the most exciting drives I've ever been on; I'm more afraid of rollercoasters than this road.  Contrary to what is stated in some descriptions, the road is wide enough for vehicles to comfortably pass each other; we drove an SUV and were able to pass by on coming SUVs with at least 4 feet distance between the sides of each vehicle...no moving close to cliff edges or mountain walls.  Yes, there are hairpin turns, but anyone with common sense should take these slowly whether on an unpaved dirt road, such as the Moki; or on a paved highway such as Route 550 going through the Rocky Mountains.  The signs with specified speed limits are there for safety, not as suggestions.  There are many pull in points for viewing the Valley of the Gods below and taking photos.  This is NOT a scary nor a dangerous road unless the driver is being reckless from the beginning; is driving in unsafe weather conditions; is driving a vehicle specified to be unsafe for this type of roadway.

Now lets go have a stupendously grand time going down the Moki Duyway! 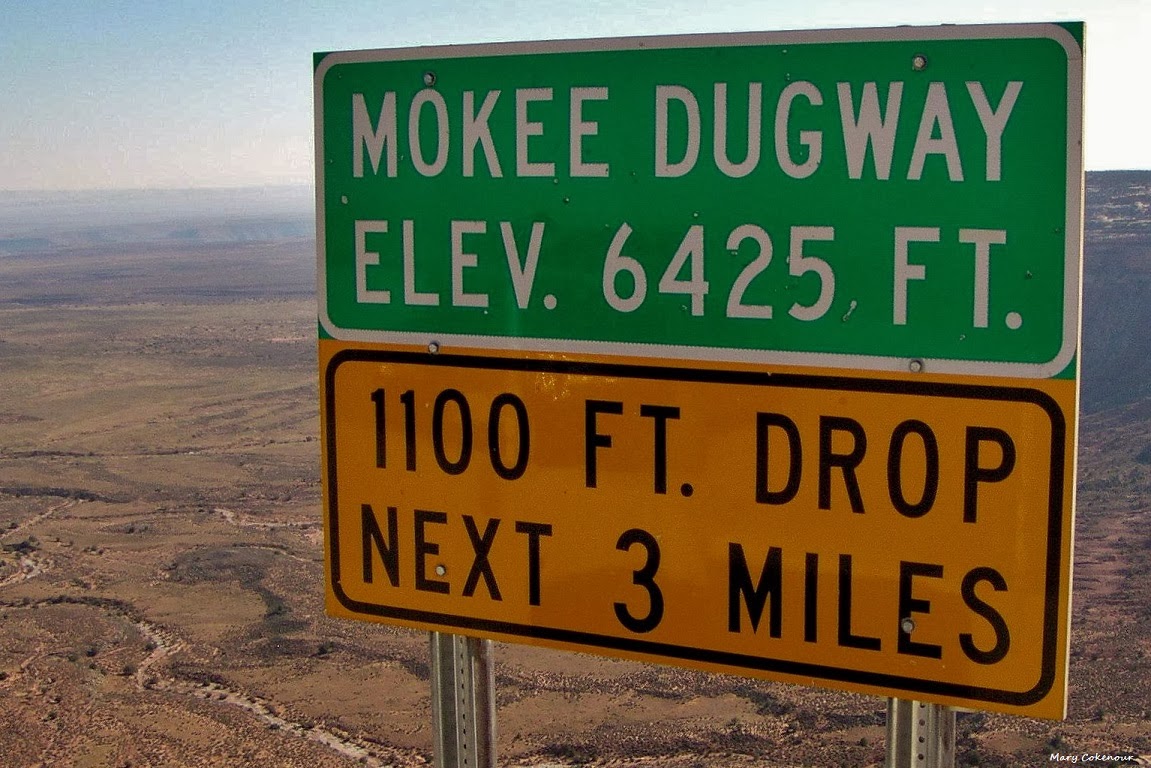 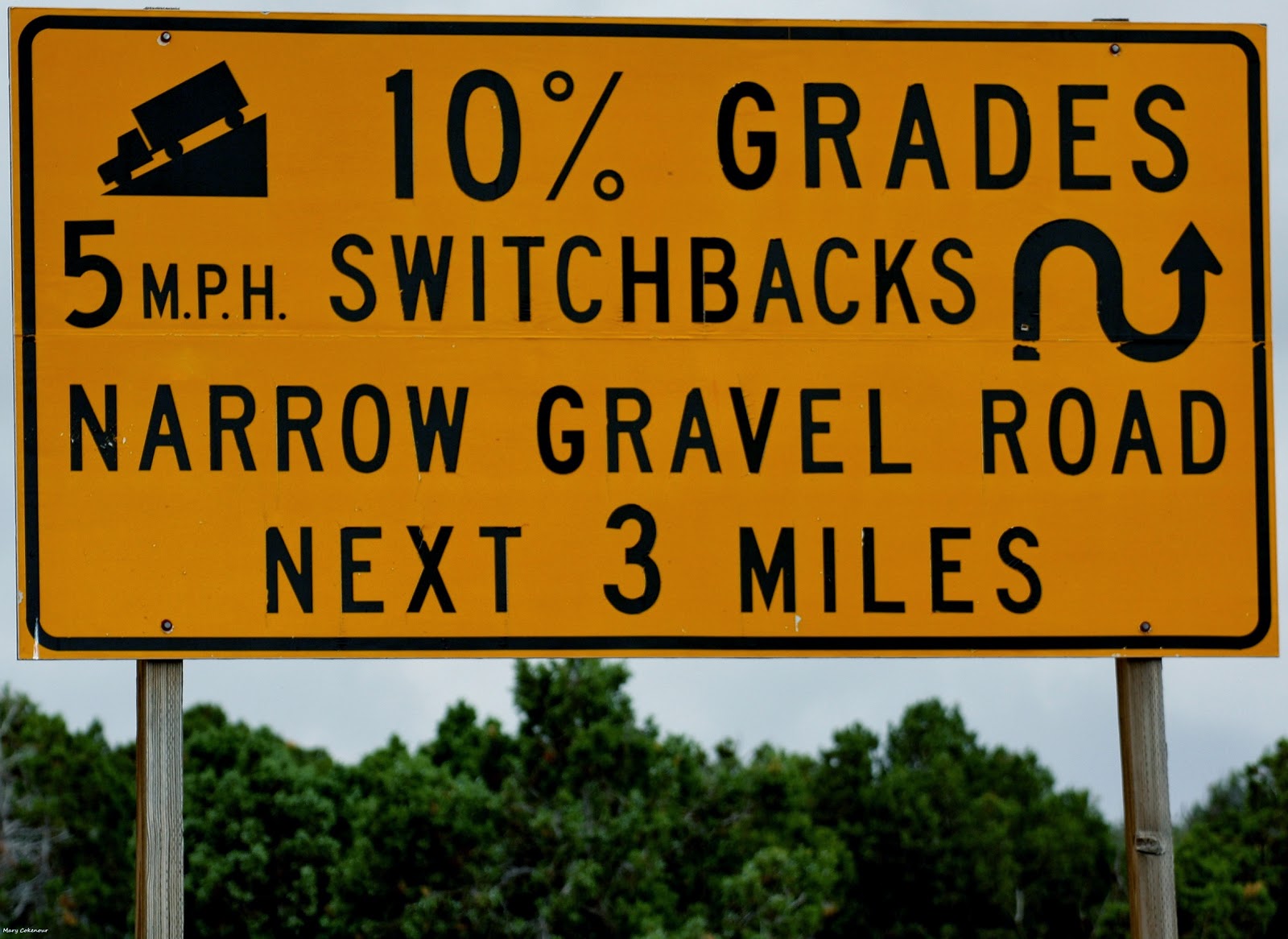 The Moki (or Mokee, Moqui) Dugway is located on Utah Route 261 just north of Mexican Hat and begins just past the road to Muley Point. It was constructed in 1958 by Texas Zinc, a mining company, to transport uranium ore from the "Happy Jack" mine in Fry Canyon (which is now a ghost town) to the processing mill in Mexican Hat. This is a well graded gravel and dirt, well maintained, switchback road that is carved into the face of the cliff edge of Cedar Mesa; descent is at an 11 % grade, 1200 feet (3 mile drop) from the top of Cedar Mesa (6425 feet above sea level) to the floor of the Valley of the Gods. The State of Utah highly recommends that only vehicles less than 28 feet in length and 10,000 pounds in weight attempt to negotiate this steep, sometimes narrow and winding road.

Why the different spellings?  "Mokee" is derived from the Spanish "Moqui" meaning "small people" which referred to the Native American cultures (Navajo, Zuni, Hopi) living in the area.  Now the word "Moki" , meaning "dead", is from the Hopi, one of the cultures the Spanish encountered.  This term was more associated to the ancient ruins of a long gone culture that the Spanish found and is attributed to the Anasazi (meaning "enemy ancestors" in Navajo).  Again, why the different names that are on many of the signs?  Well, that is attributed to the white settlers that moved into the area; seems they just couldn't make up their mind which spelling to use, so they use them interchangeably. 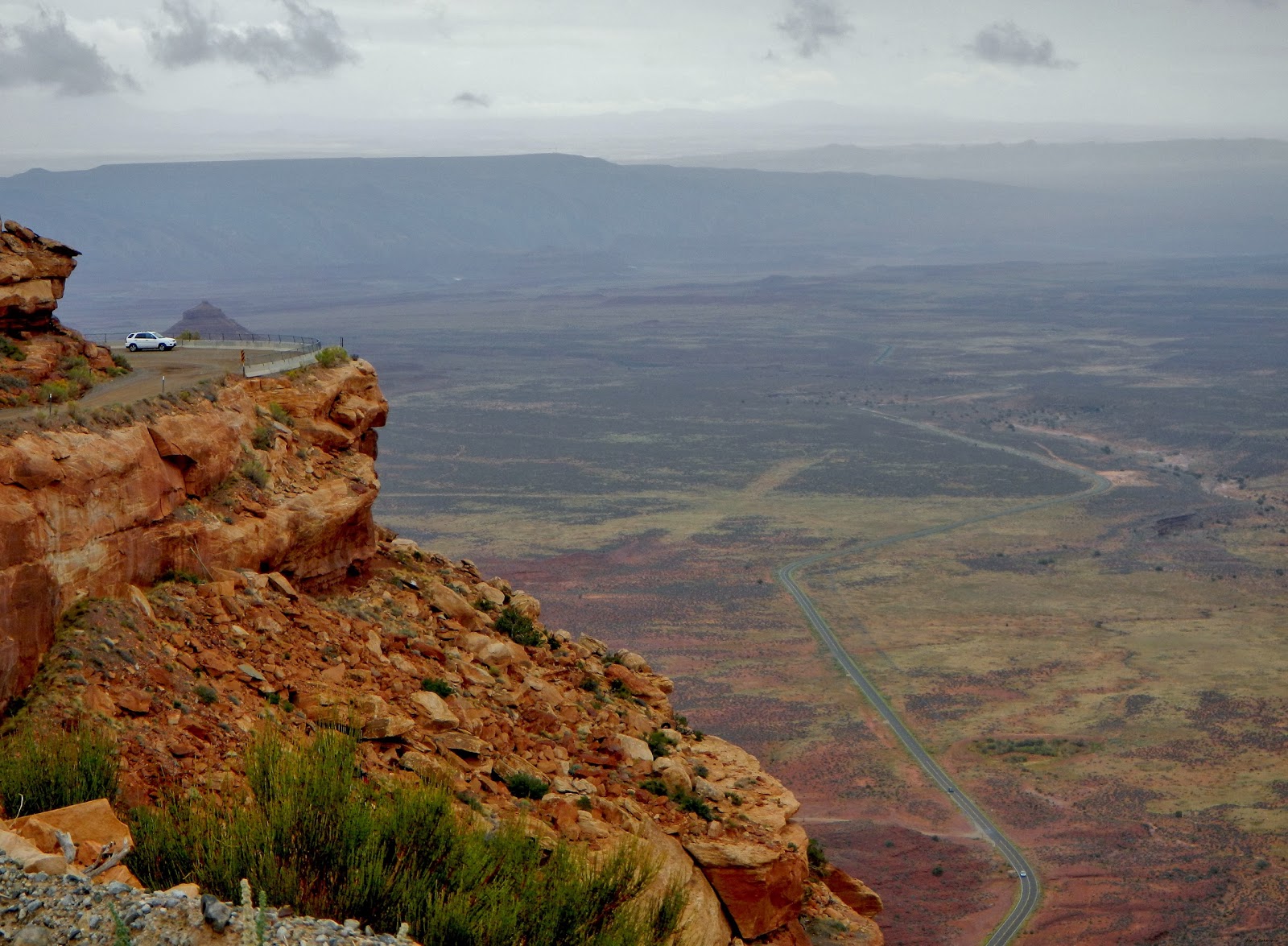 At first the Dugway looks formidable, especially when your first viewing of it is of open air and a steep cliff; take it slow and there is a pull in point not far.  Now those reckless people I mentioned in my little warning above; our first encounter was seeing a car move out of the pull in point and begin a backward ascent towards us.  A good blast of the horn indicated to the driver that this was definitely a bad idea, so they put their vehicle into drive and began forward again.

Sit back, relax and enjoy the drive; the views are wondrous!  The day we were there, cloud cover indicated there may or may not be a storm later on  (it came in the evening); the roadway was dry and easily drivable.  So while the view of the Valley of the Gods was misty; it gave it a mysterious air that seemed to fit it so well. 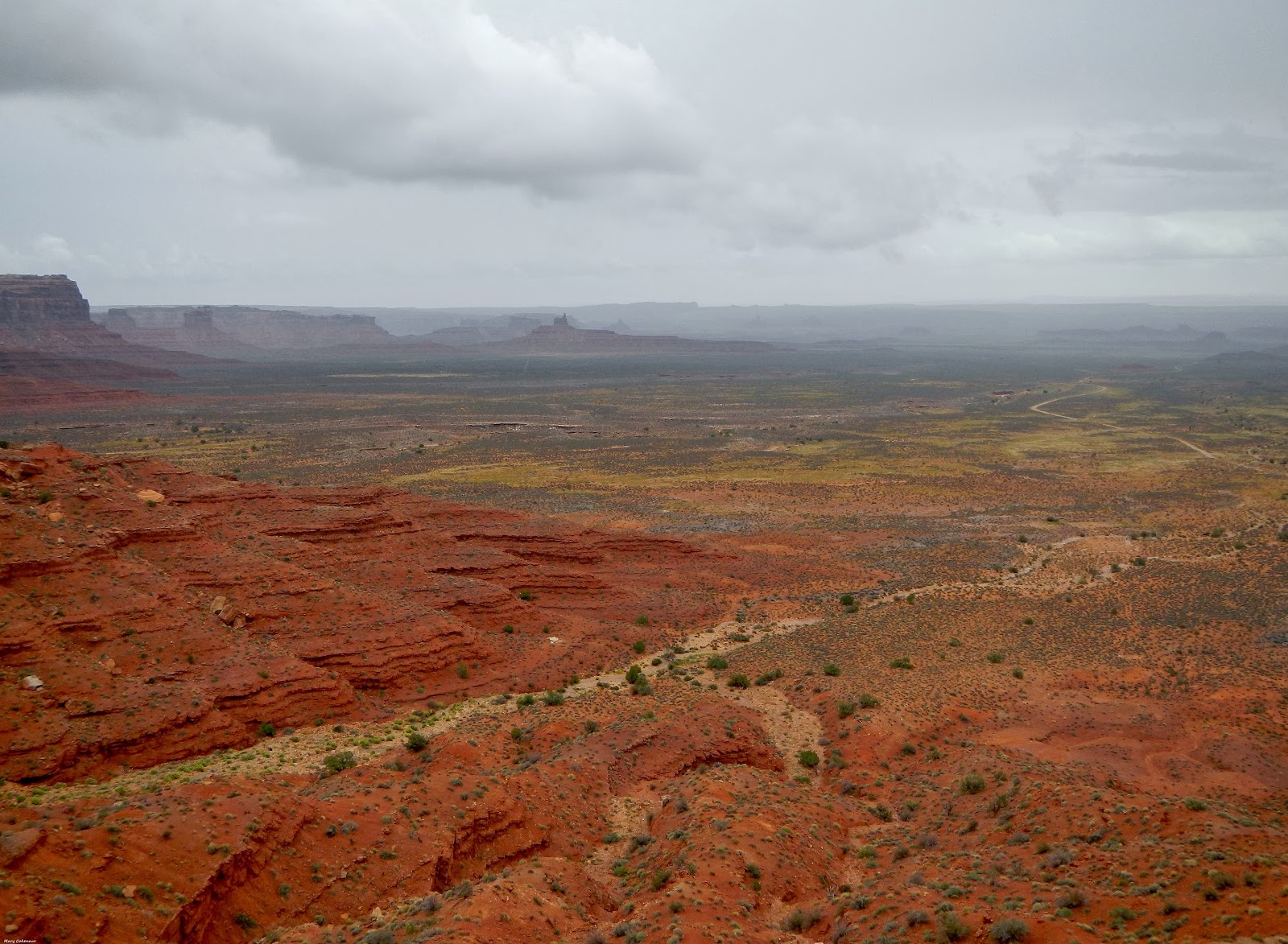 Now besides the views, we found a couple of formations in the hillside that resembled the heads of animals.  This is what they looked like to us, and we named them as we saw them; Turtle Head and Gorilla Head. 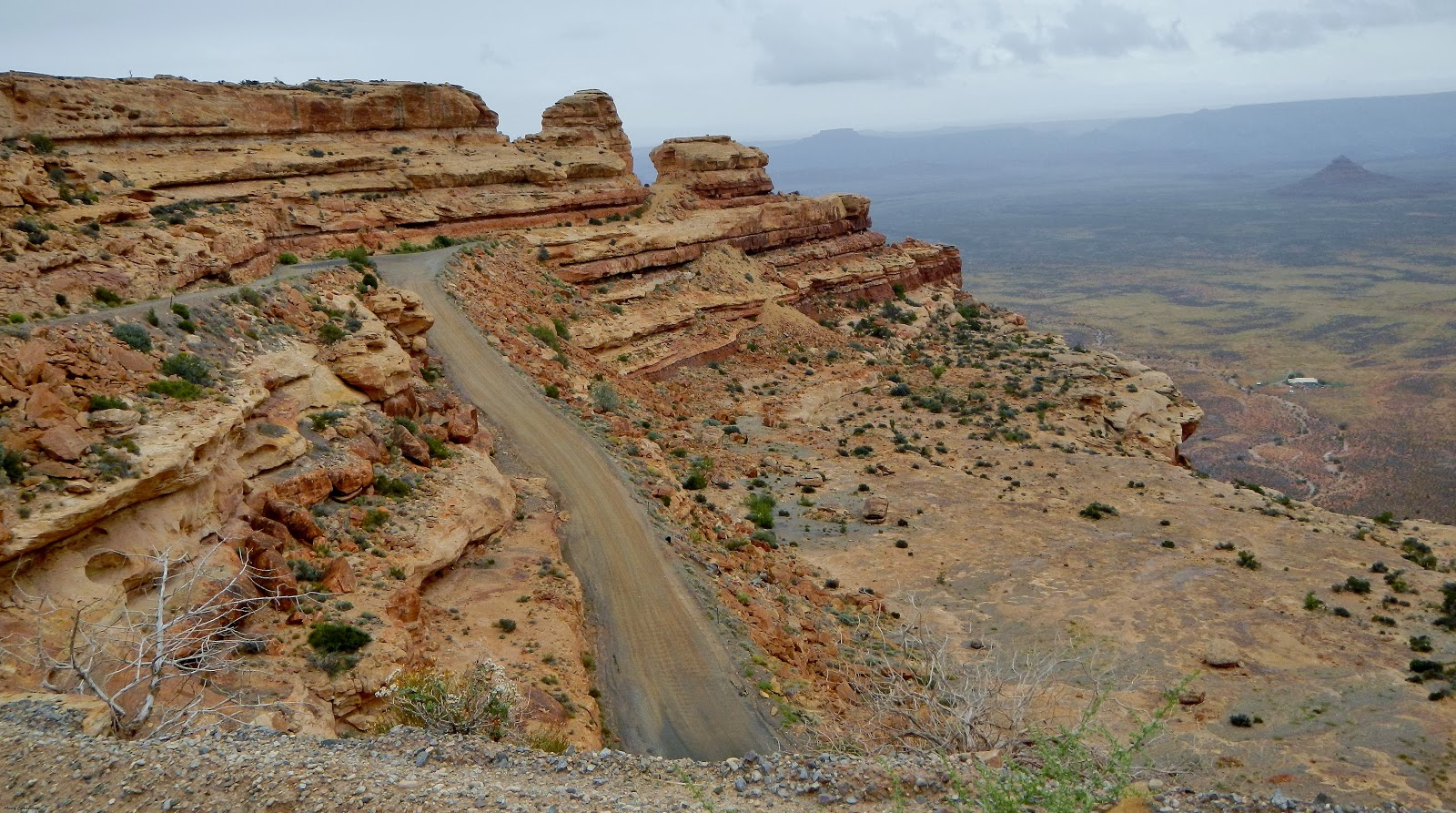 The Gorilla Head formation was just before a pull in point where the classic Moki Dugway photo can be taken; not only do you get a view of almost the entire roadway, but of Cedar Mesa as it continues westward. 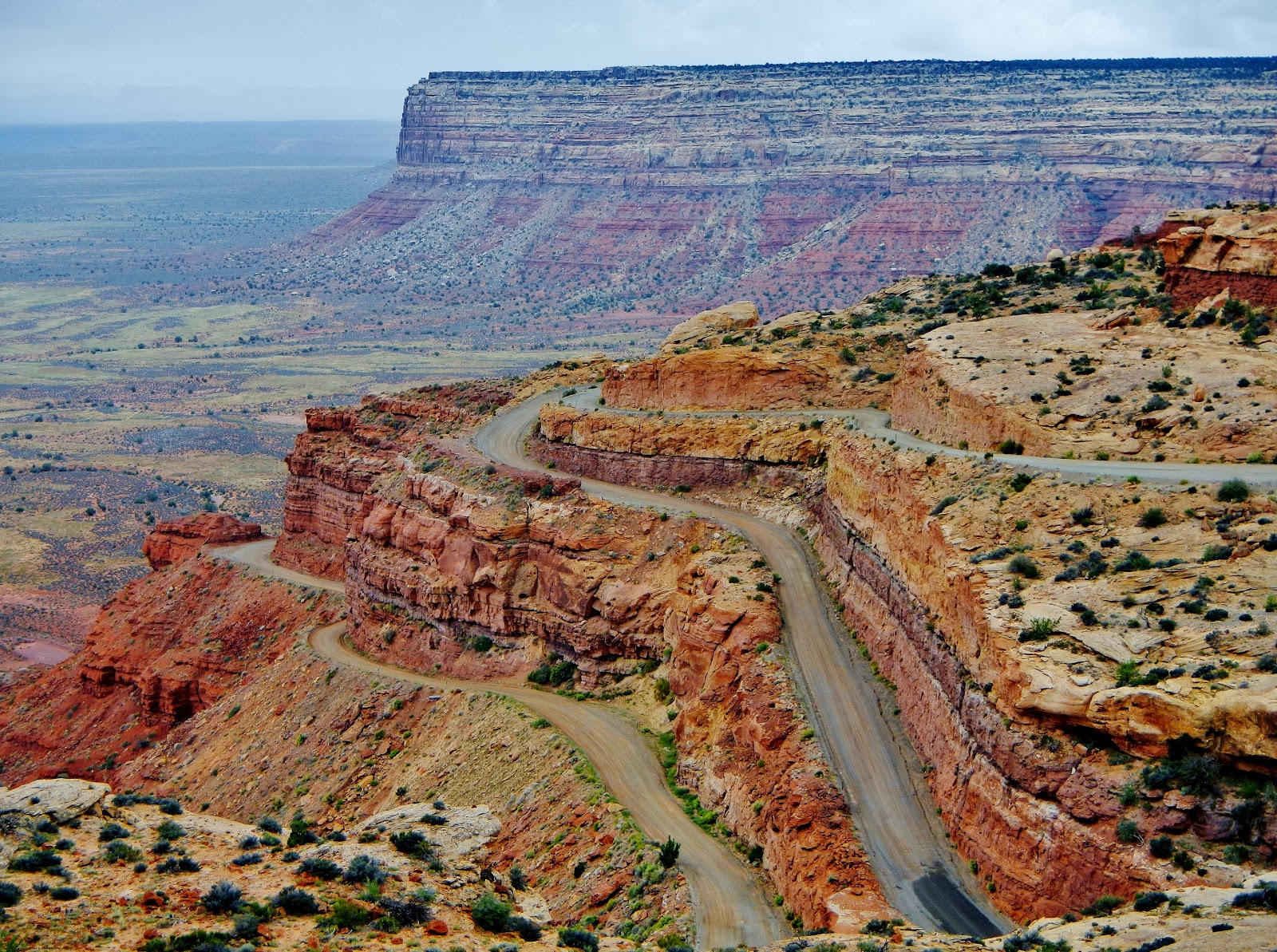 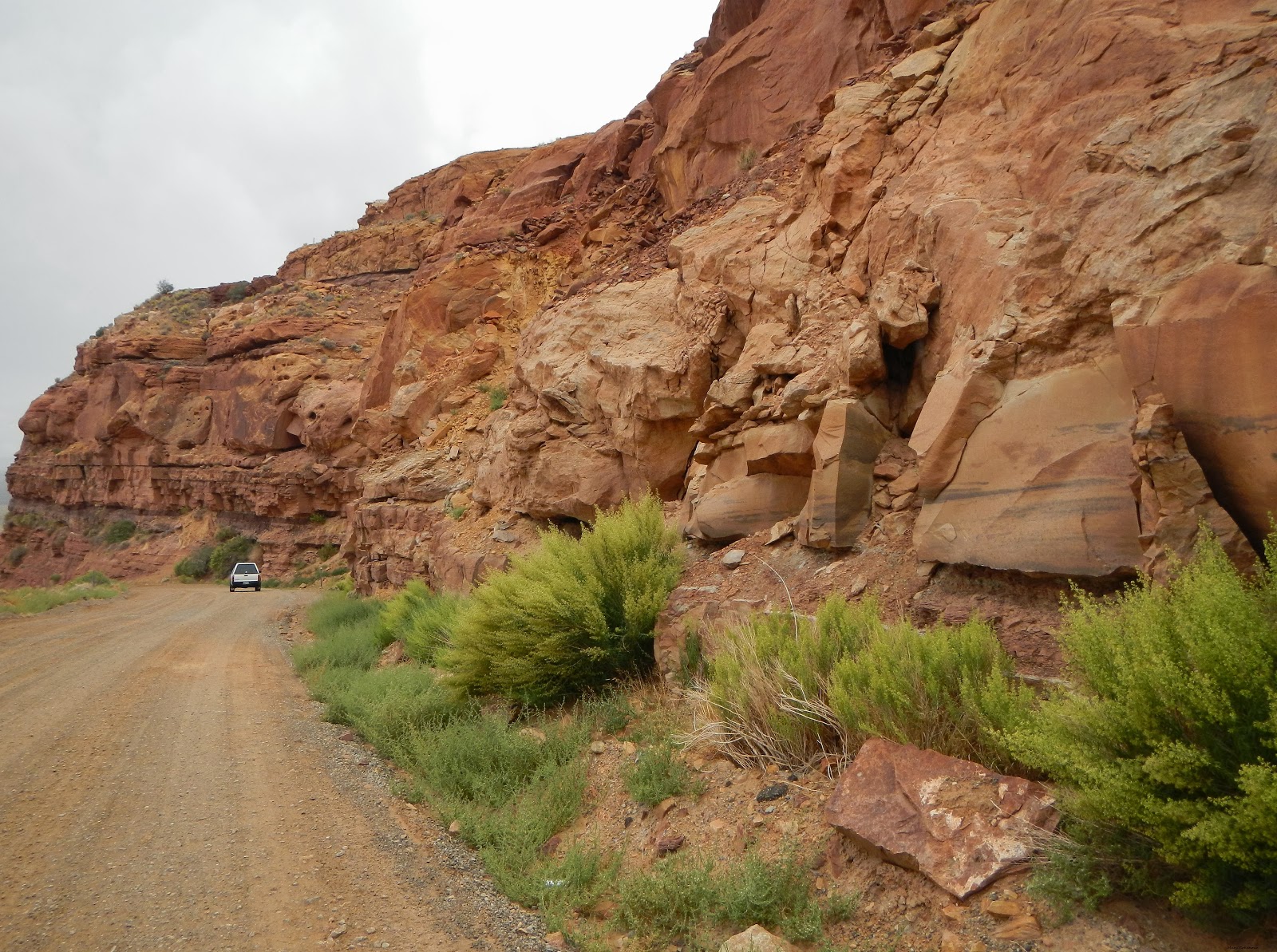 As you move on from this point, the Turtle Head formation will be a little way along the road.  We were able to pull over to the side and vehicles coming both ways were able to pass us without any difficulty.  From this point on, the road will begin a steeper descent downward, and Valley of the Gods will be more open before you.  I took the photo of this section of the road while we were still further up, so you can see how it descends. 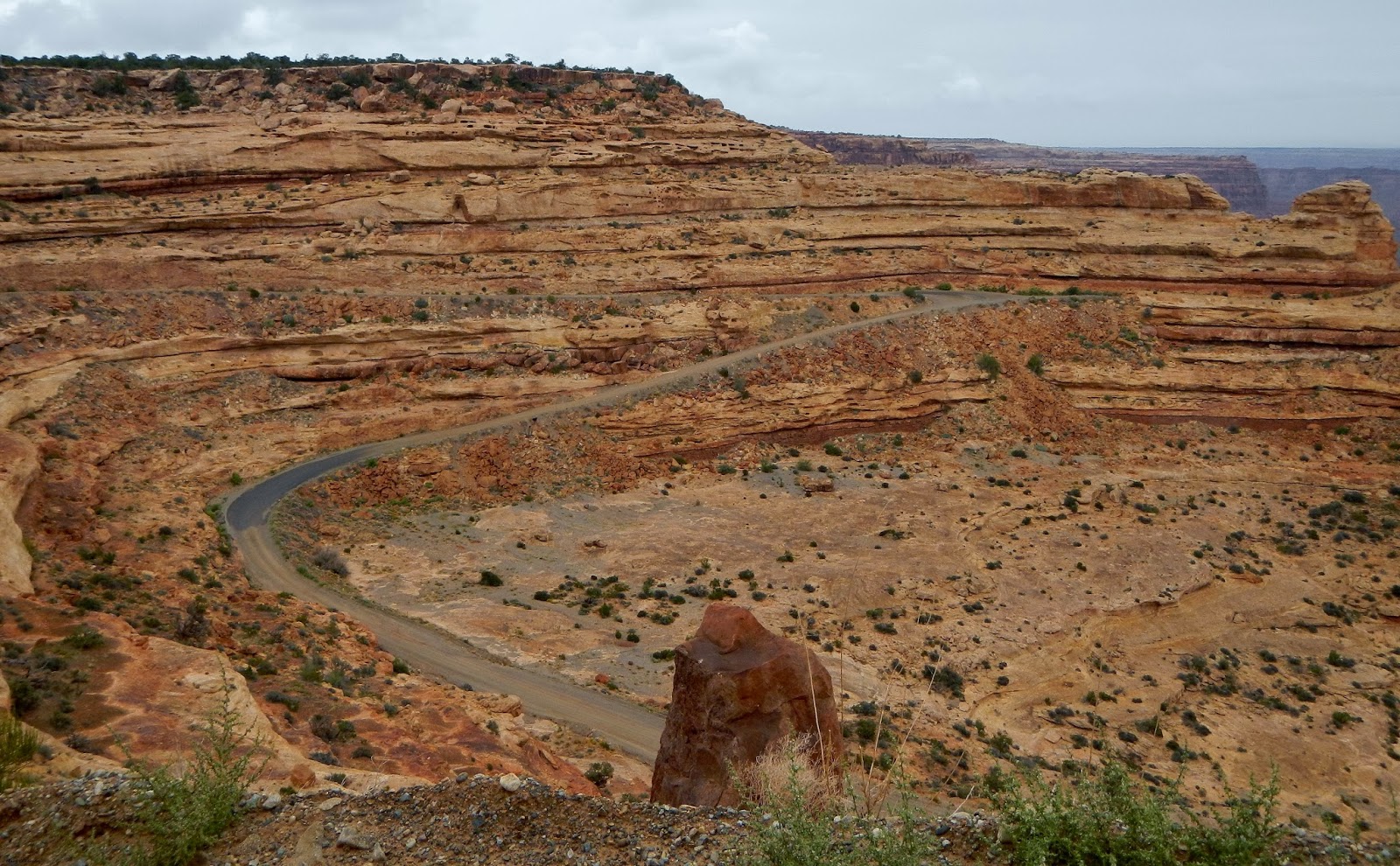 As you can see from the photos, the roadway is flattened and is not that difficult to maneuver as long as you go slowly around the hairpin turns.  A classic quote from the movie "Dune" is, "Fear is the mind killer"; if you allow fear to take over your adventurous spirit, then why go anywhere at all?