Islands in the Sky - Part One

Back in June 2013, I introduced you to the "Ghostly Mustangs of Dead Horse Point" which is reached by traveling down Route 313; eleven miles outside of Moab. Now we're going a bit further down the road, crossing from Grand County into San Juan County, to experience Canyonlands - Island in the Sky. Of the three sections of Canyonlands (Needles, The Maze, Islands in the Sky), Islands is the largest; itself being divided into three sections; so, sticking with the theme of three, this adventure will be in three parts.  How long will it take to visit Islands?  What a ridiculous question;  as long as you want it to take of course!  There are many trails to hike; and walking to the Overlooks will be over sandstone, slickrock and sand; the only thing paved in this park is the main roadway.  Roy and I spent six hours there and still didn't get to walk as any trails as we would have liked to; we did make sure to get as much of an eyeful as possible though.  There were clouds moving in all day, we heard thunder in the south; by 5:30 that evening, the rain began to fall down.  Best get started then, aye? 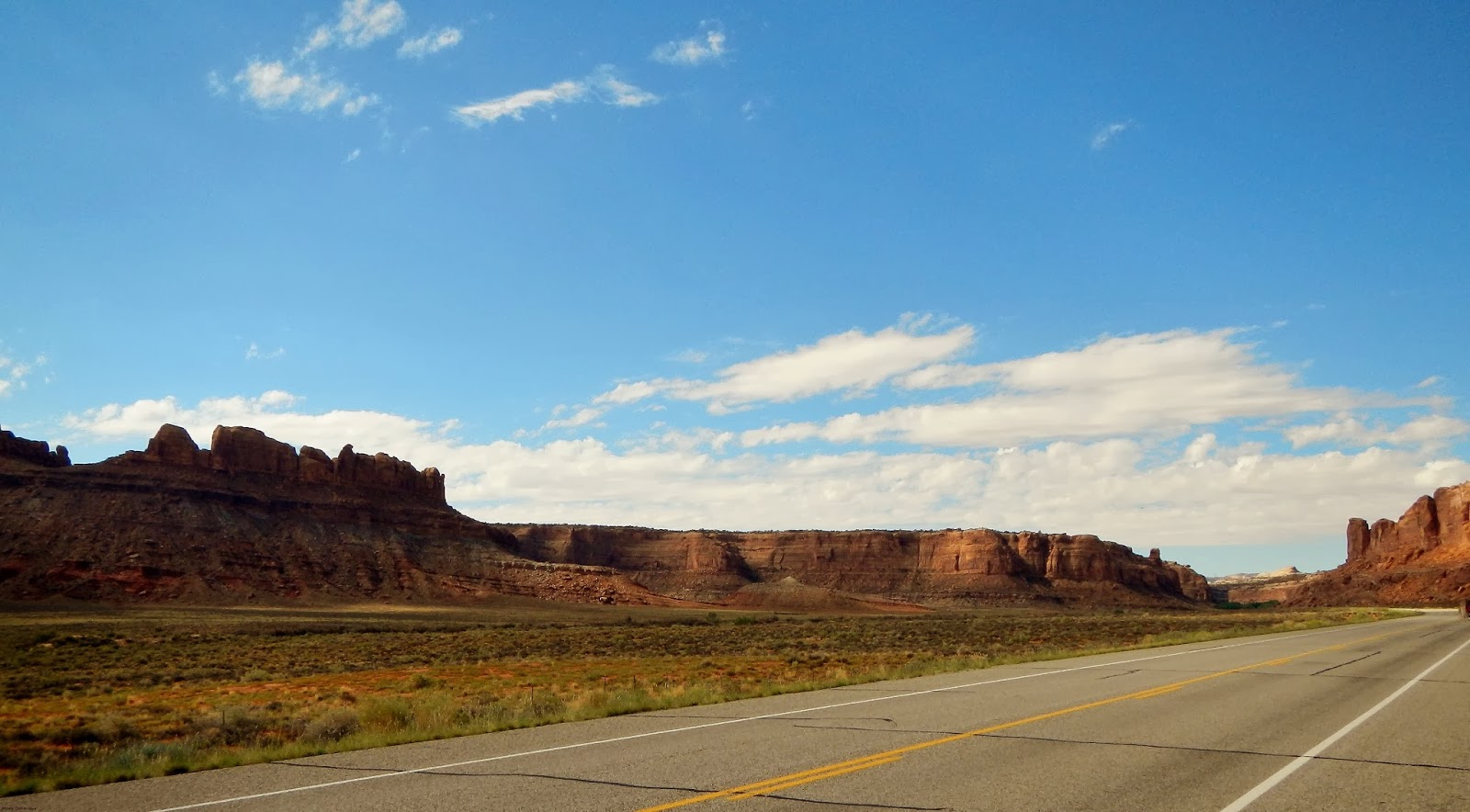 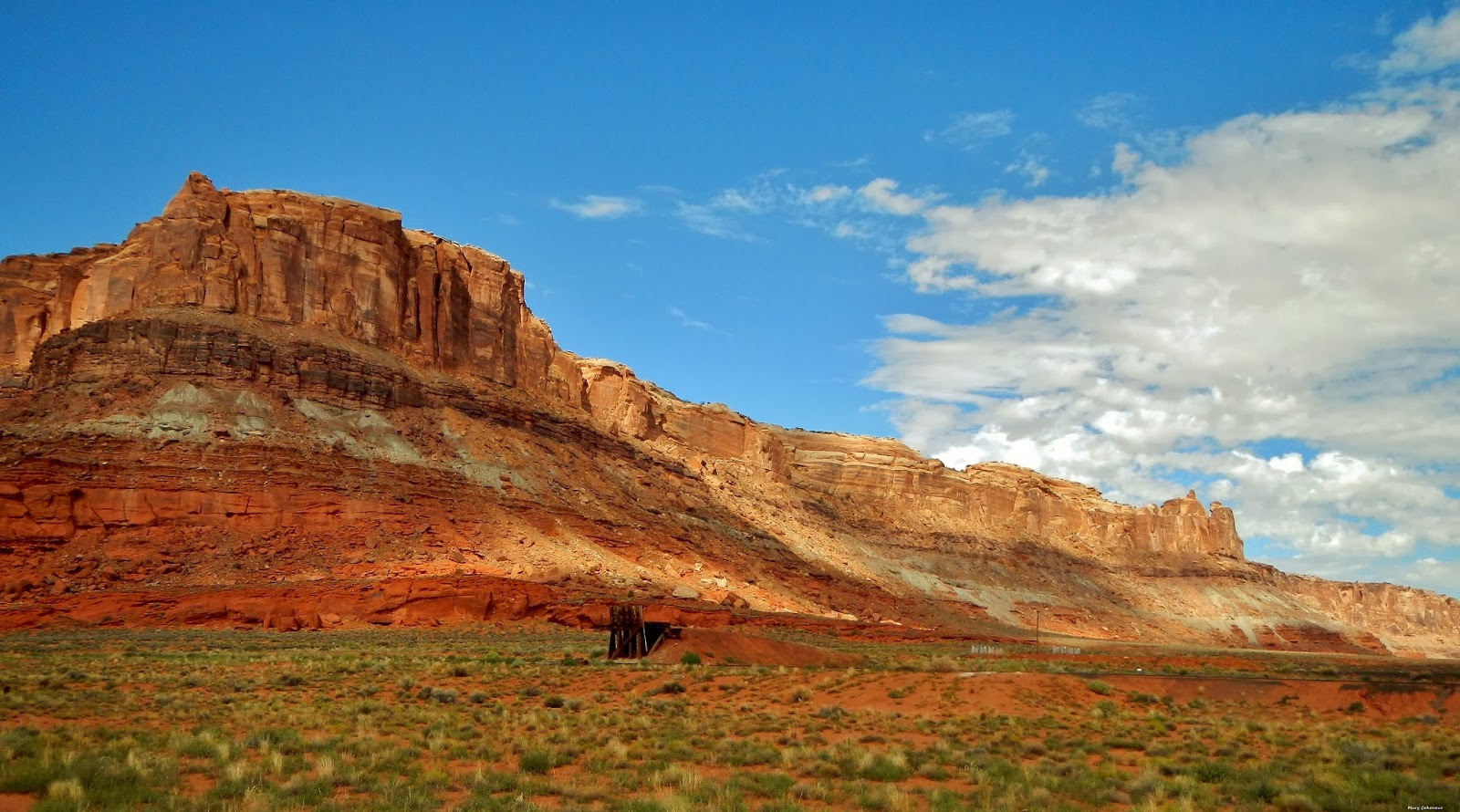 Route 313 is an exquisite drive in itself; sandstone walls reaching up to the sky; the remnants of an old railway trestle will be on the right hand side; reminding us of Moab's mining days of the past. 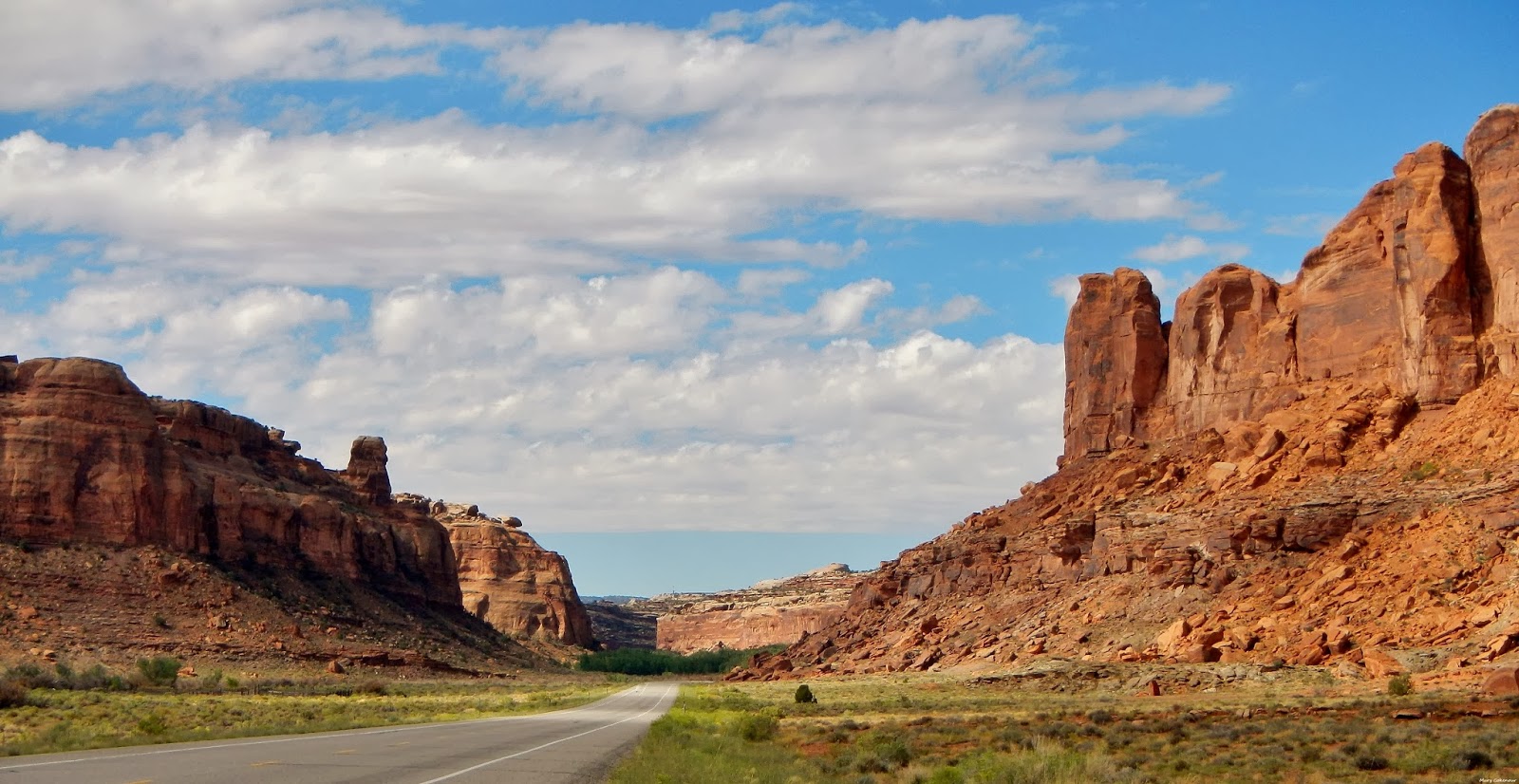 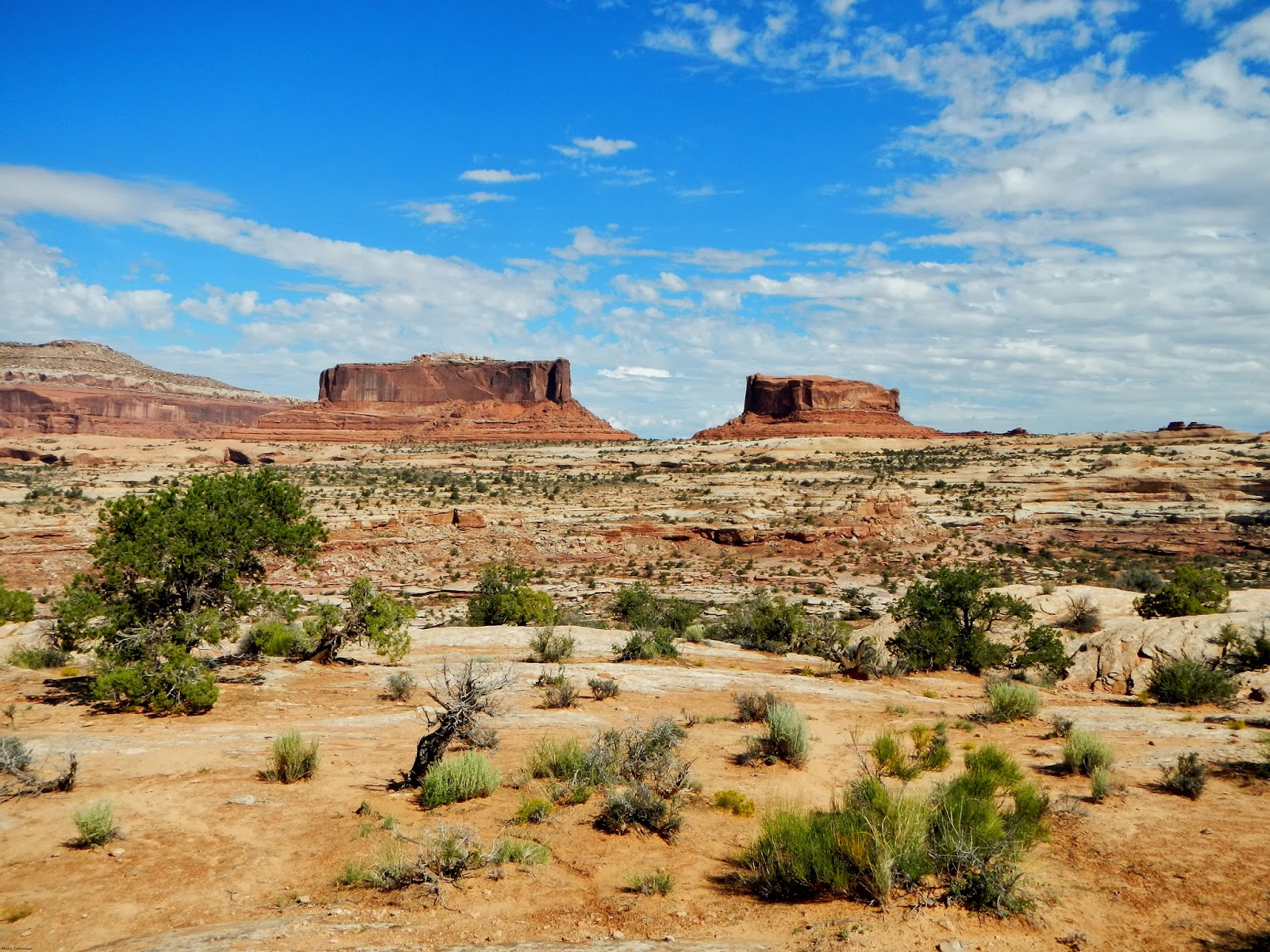 There will be a parking area for Merrimac and Monitor Buttes; this will be an additional shock to the senses, but there is still more to come!

You'll come up to a sign directing you to either Dead Horse Point (to the left), or go straight for Islands; I highly recommend you take one hour and explore Dead Horse Point.  This is the Overlook for the famous Gooseneck formed by the Colorado River, the "white horse" silhouette on the canyon floor, and "Thelma and Louise Point", where the Grand Canyon scene was actually filmed for the movie.   Whether you go here before or after Islands, do not miss this site!

While you have been riding in Grand County, you'll eventually pass a sign stating you are now entering San Juan County, the true home of Canyonlands National Park.  Once you pay your fee at the toll booth, or show your National Park pass; visit the Visitors Center which is not too far away; and the Shafer Trail Overlook just happens to be directly across.  Oh, by the way, there will be two types of rangers available at the Park, the human and the raven; the ravens have their wings in everything, as demonstrated with the photo of the toll booth.  The ranger inside informed us that he, the raven, was acting supervisor for the day. 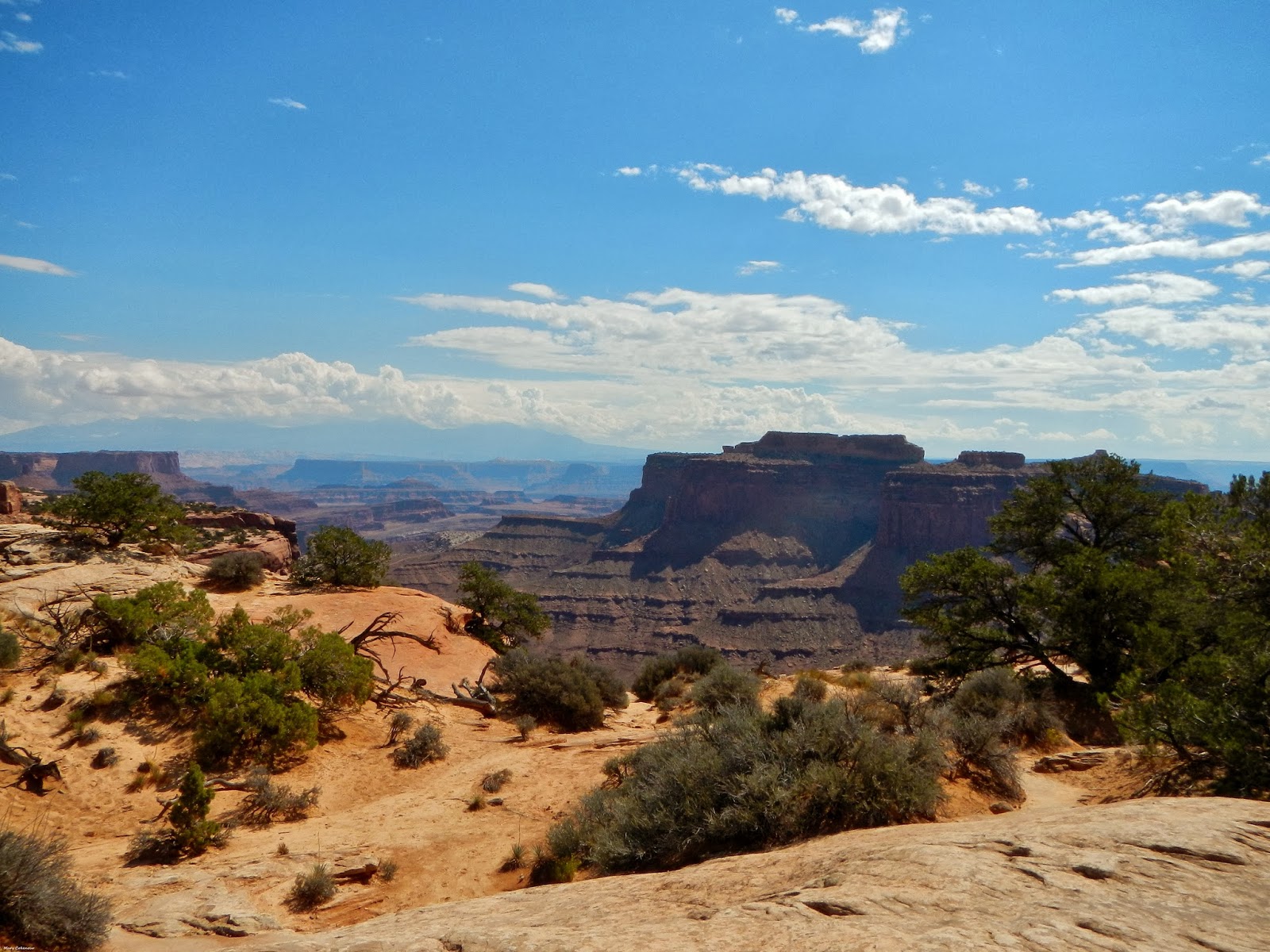 The Shafer Trail can be accessed here at Islands; a winding, graded dirt road that hugs the hillside as you descend down into Shafer Canyon.  This trail will take you across Dead Horse Point into Long Canyon, and finally exit out onto Potash Road famous for Jughandle Arch, petroglyphs and the love of rock climbers, Wall Street.  Driving down the Shafer Trail is on our "to-do" list for 2014. 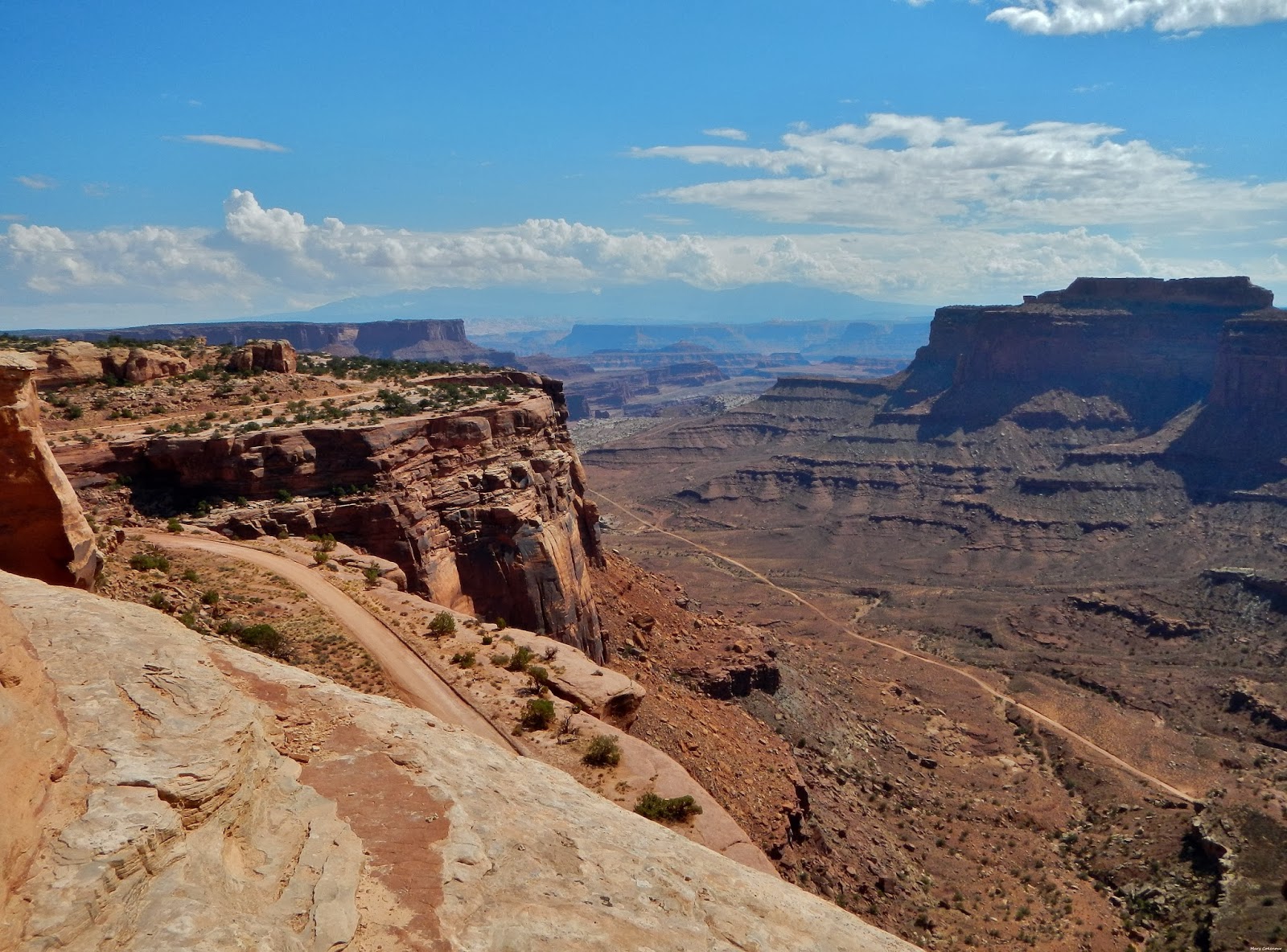 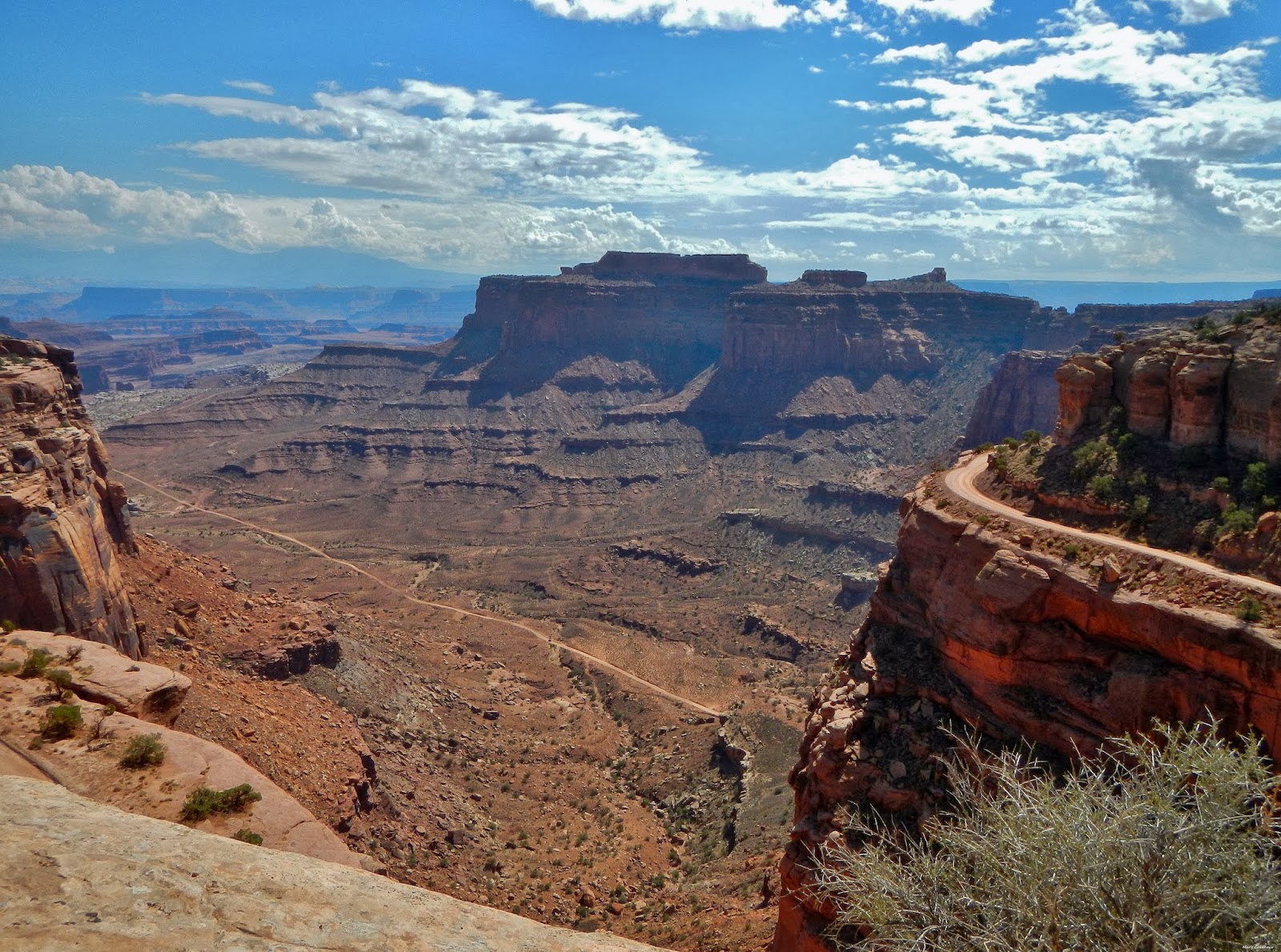 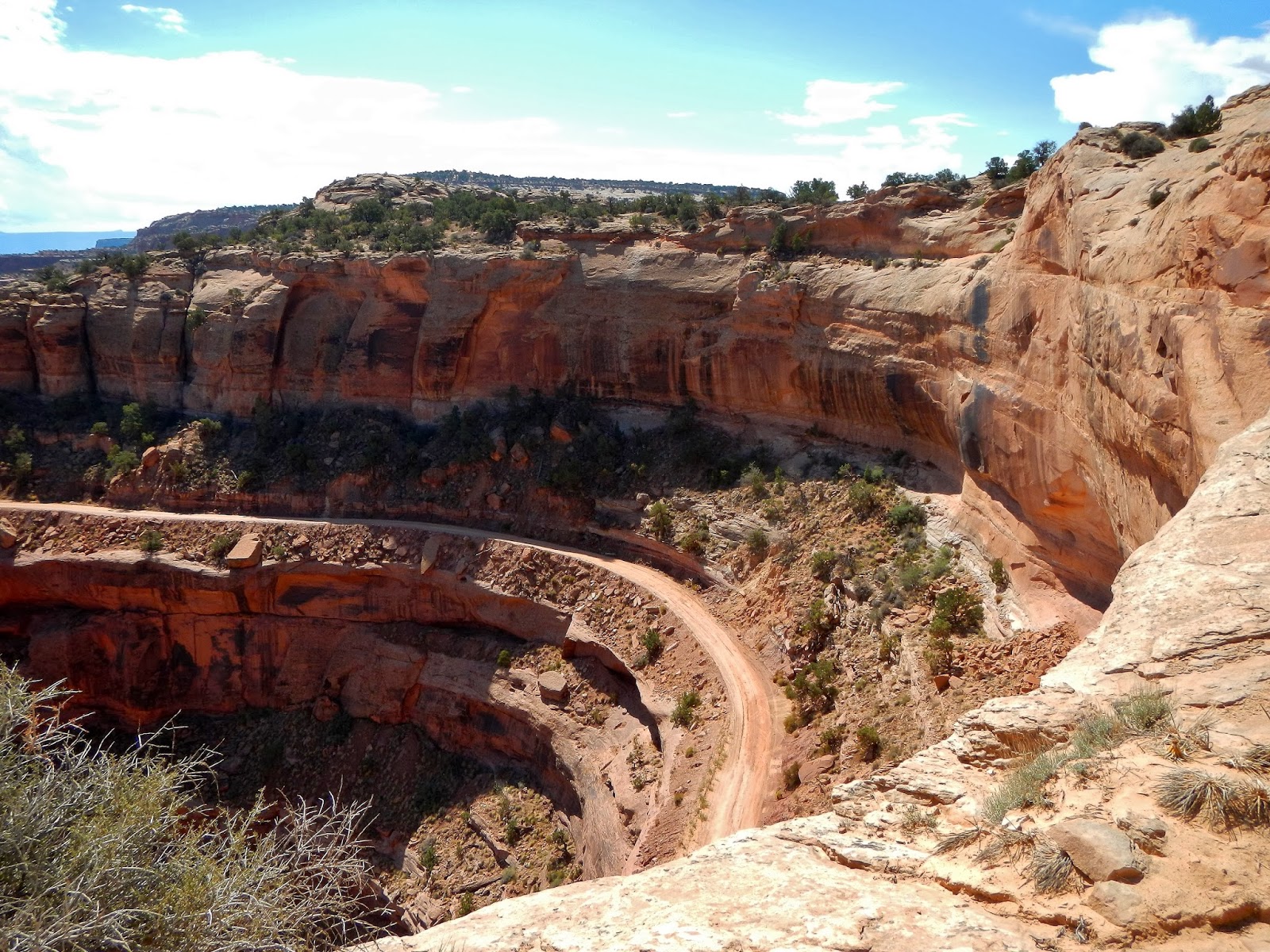 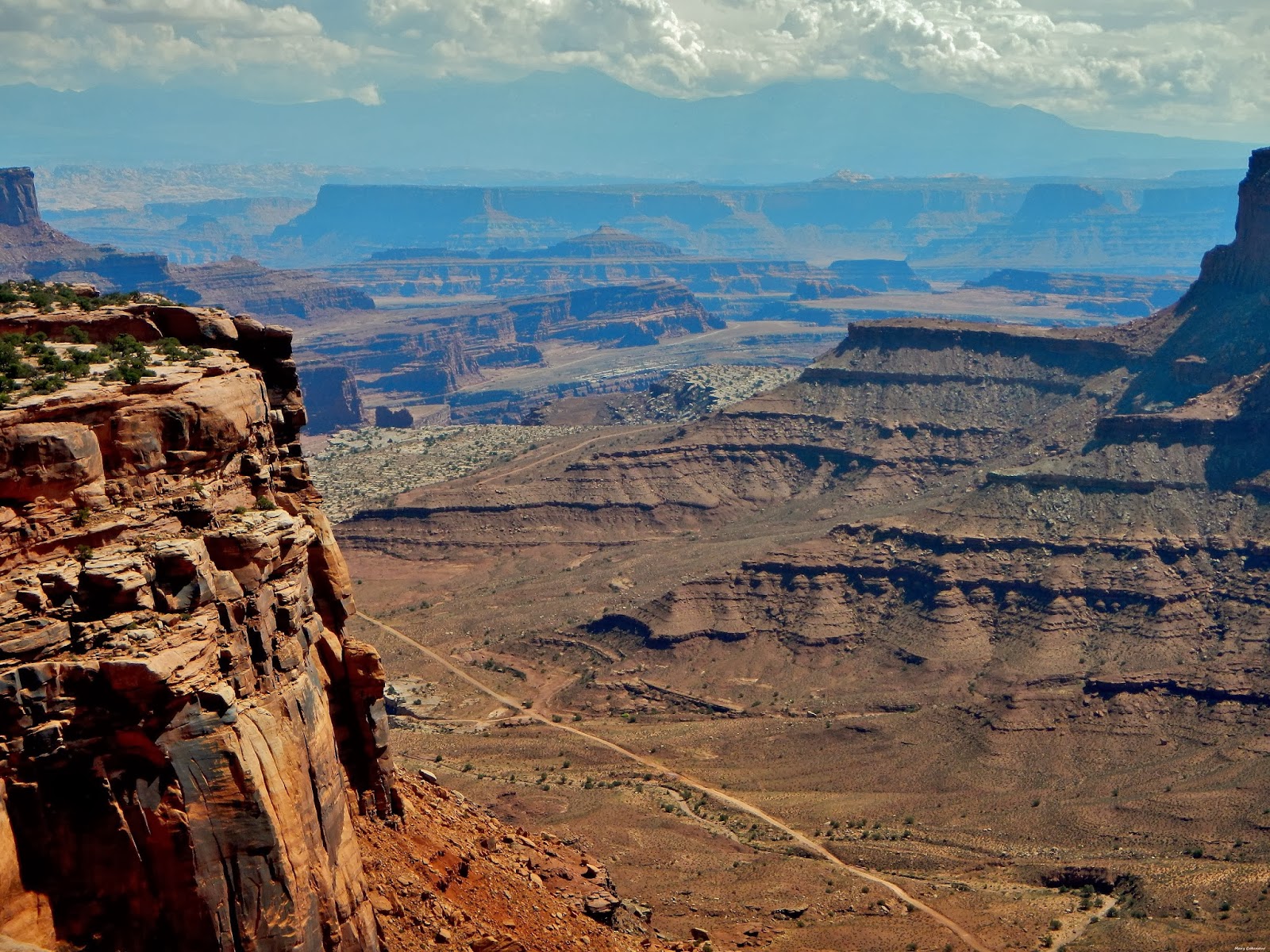 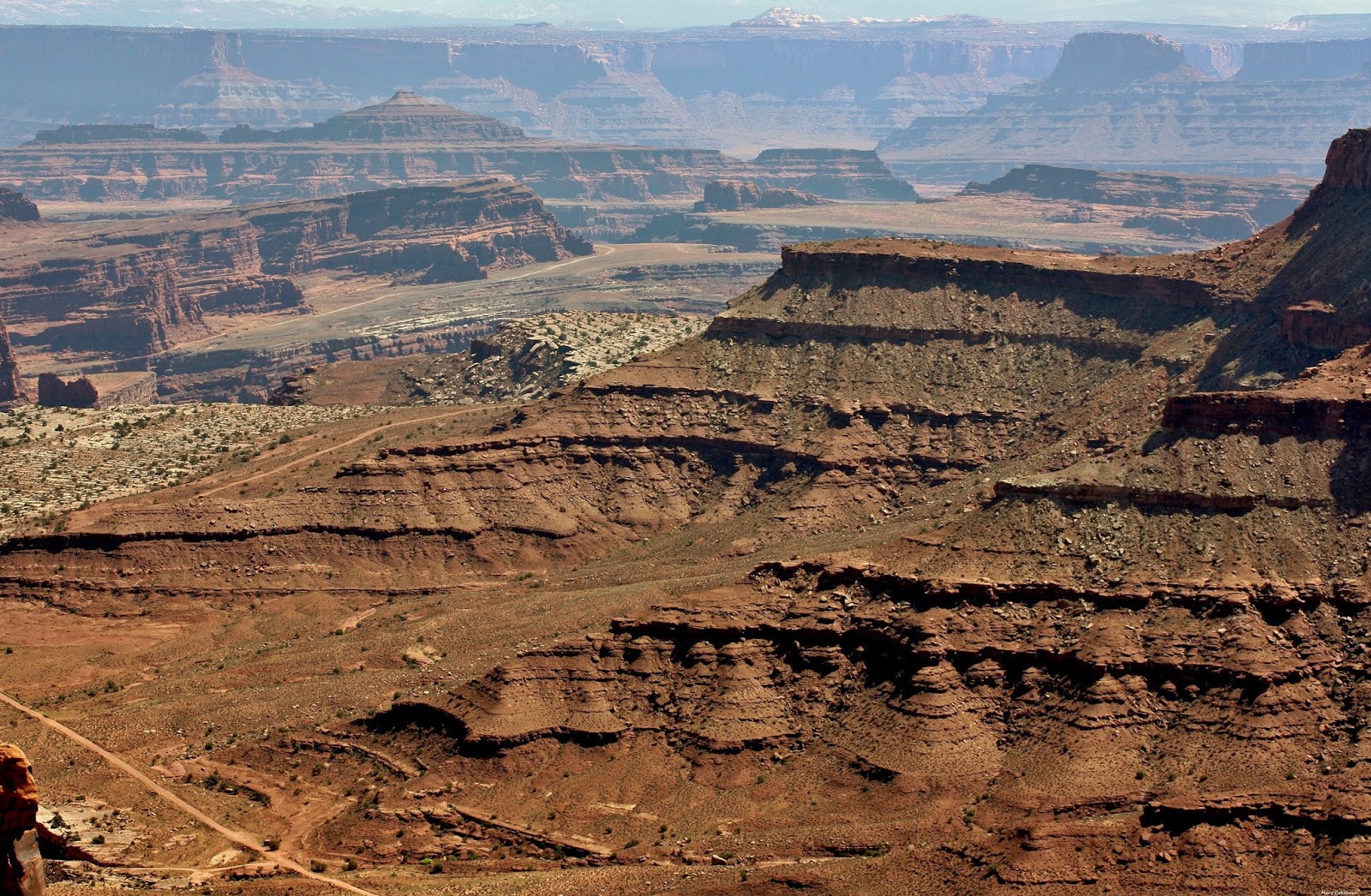 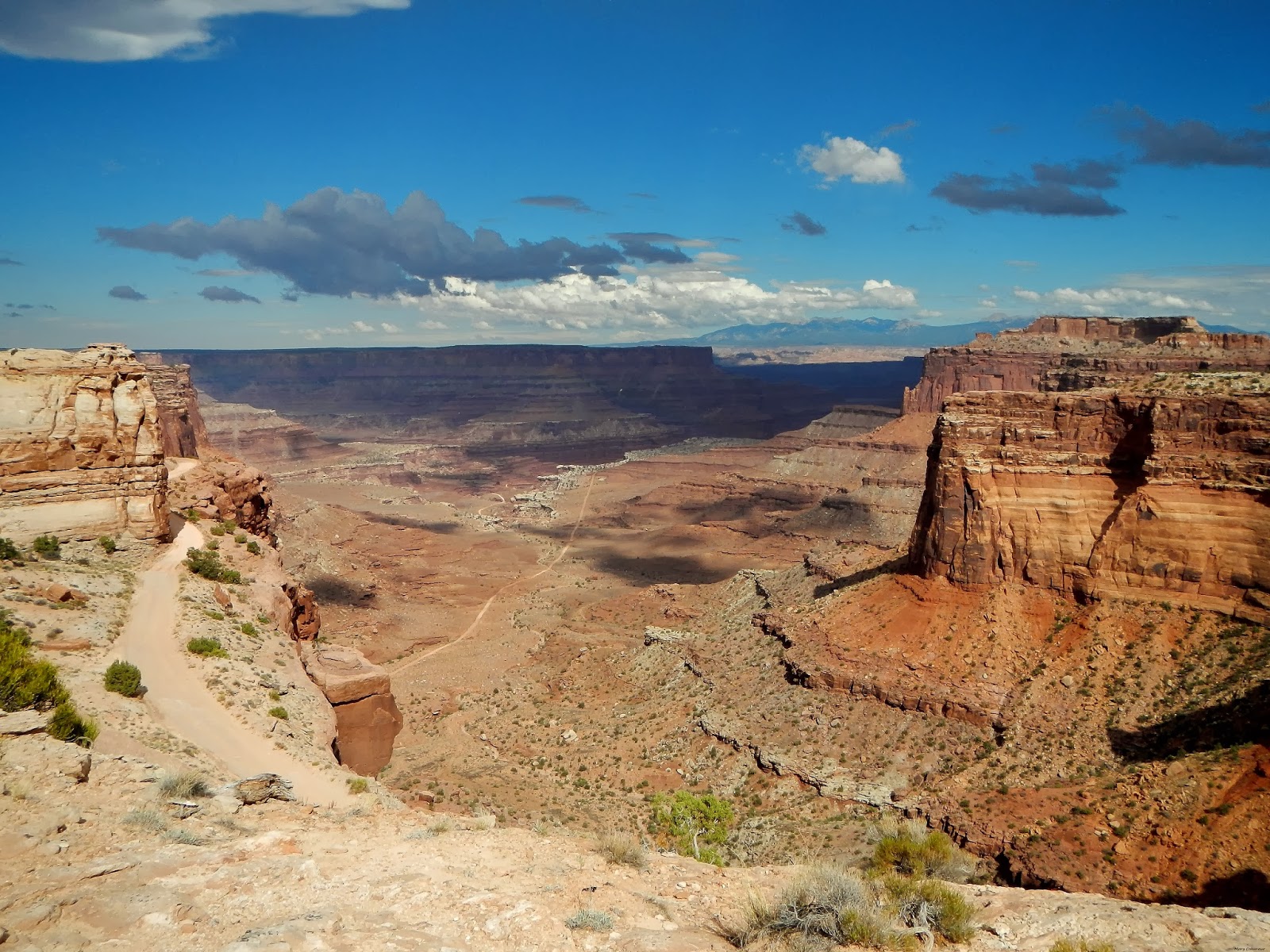 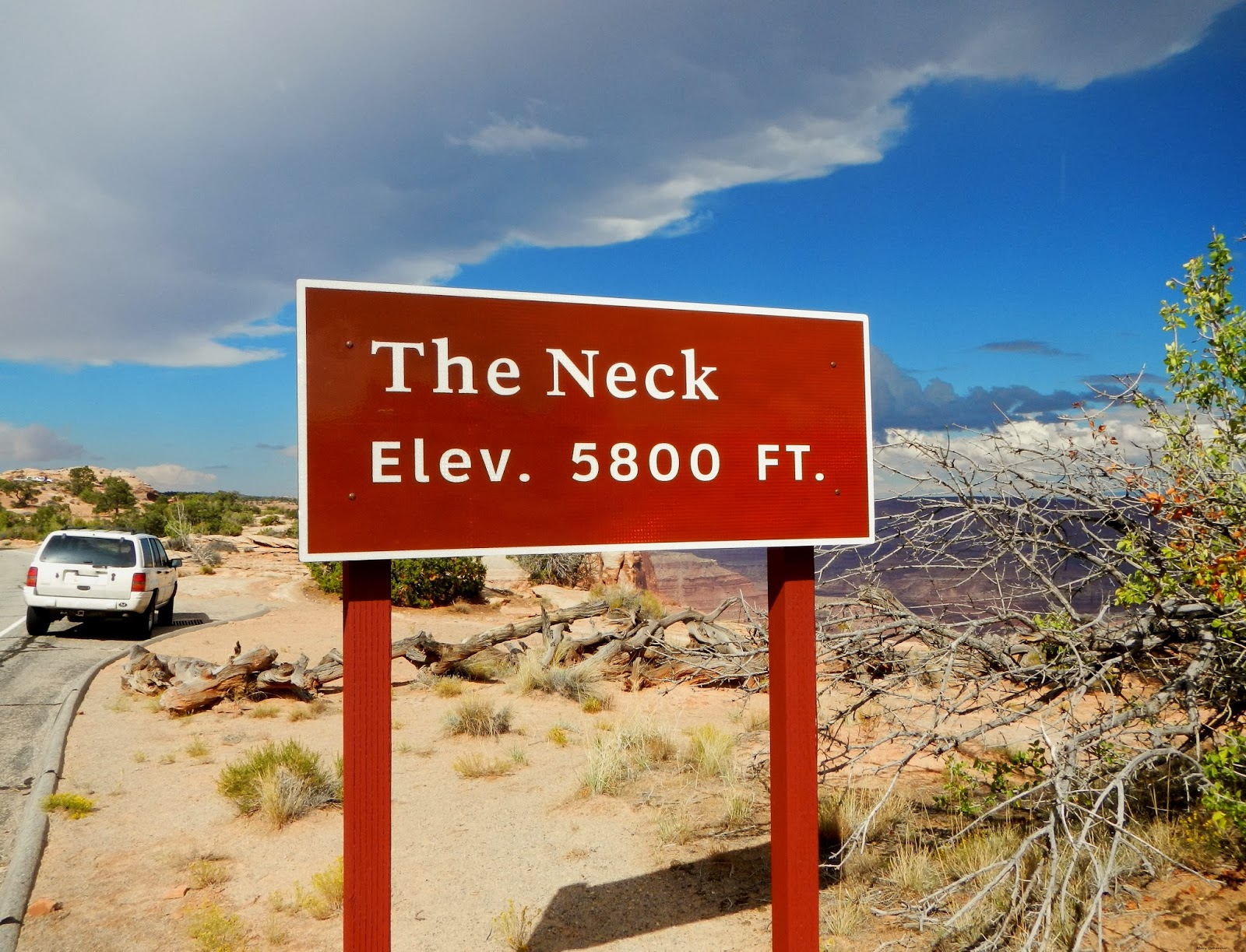 Down the road a little further will be the pull in point for "The Neck"; another view of the Shafer Trail and the canyon below; but cross the road and you will get a most excellent viewing of "Neck Spring".  There is a loop trail (considered moderate in difficulty) that goes down into Neck Spring for hikers; estimated time to complete the trail is 3 to 4 hours. 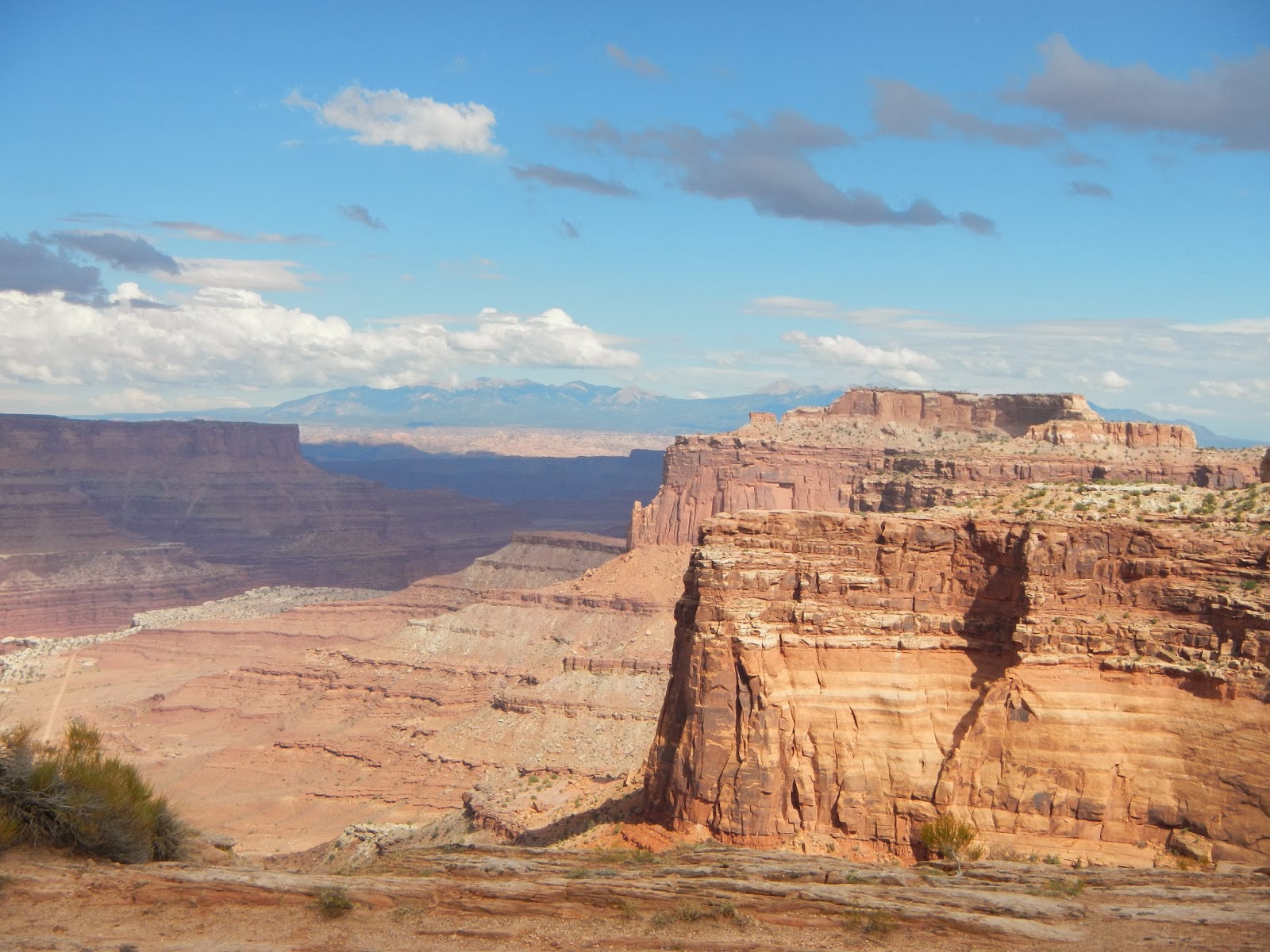 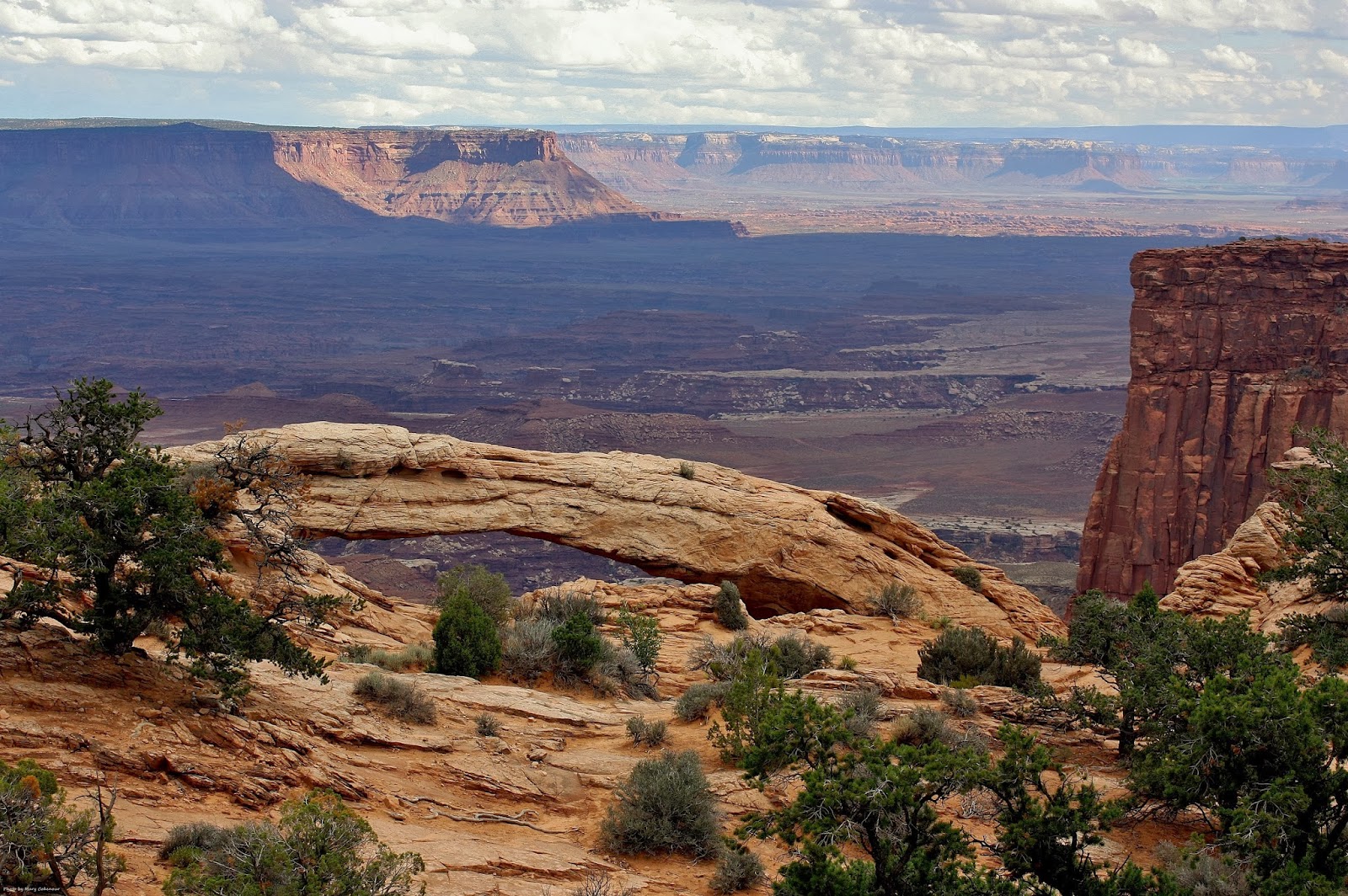 Now here is one of the most wondrous features of this stretch of roadway, Mesa Arch.  The trail itself is a half mile loop over sandstone steps and sand; surrounding you is a truly desert environment.  Mesa Arch is spectacular, but what you see from the arch will blow you away as much as the arch itself.  The White Rim off to the right; Sandcastle Tower, Washer Woman Arch and Monster Tower are directly left through the arch; behind them is Airport Tower; the La Sal Mountains in the far distance.  The visitor's guide says, "30 minutes", but if you do not spend at least an hour experiencing this section of the Park, then you're not truly there to experience it at all.  With Mesa Arch, the top is flat and wide enough to walk over, and we saw a couple of guys do it; however, they did say that the wind got stronger up there.  The other side of the arch is a sheer drop off to the canyon floor below, so I wouldn't recommend doing this at all.
﻿ 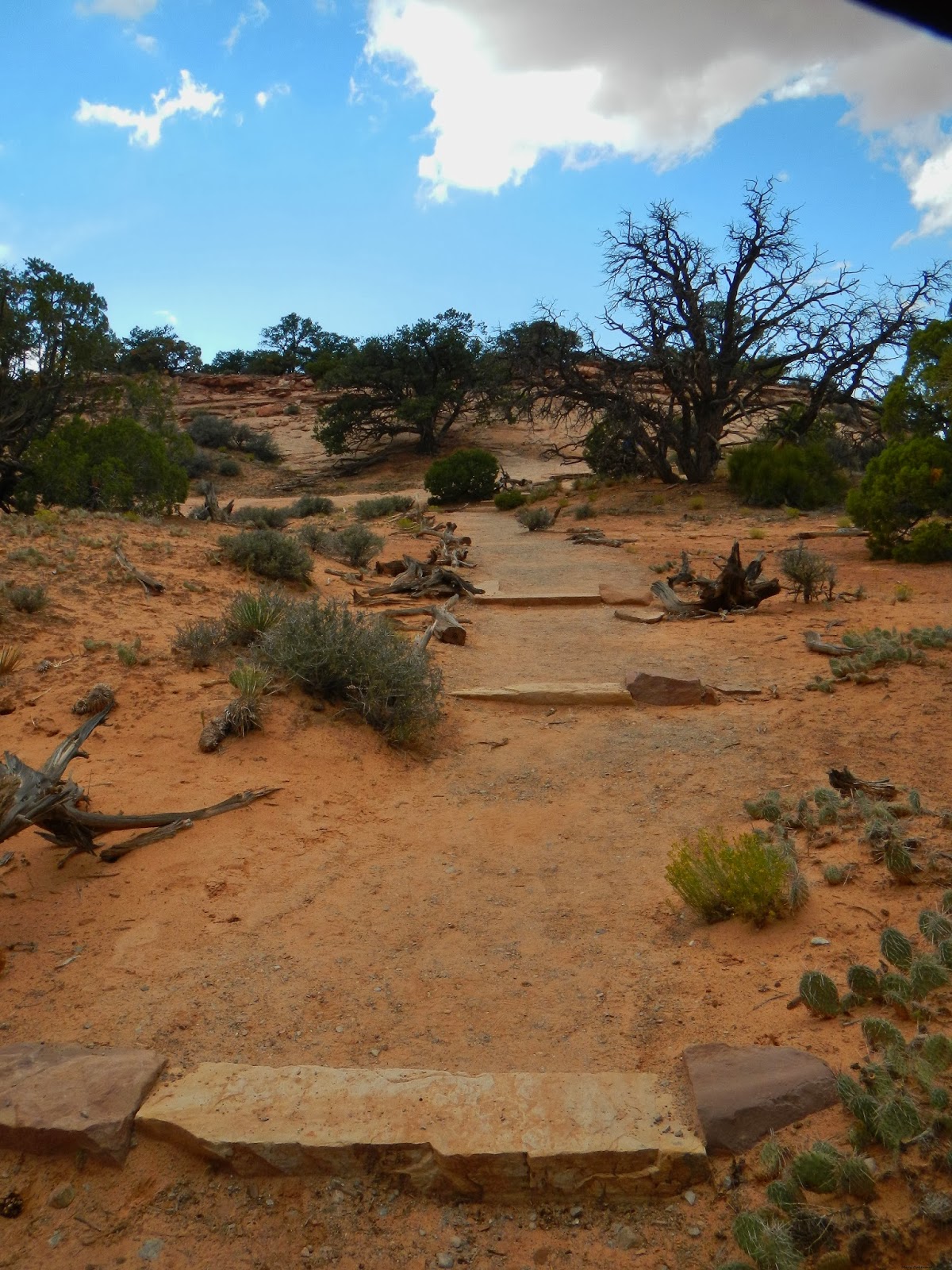 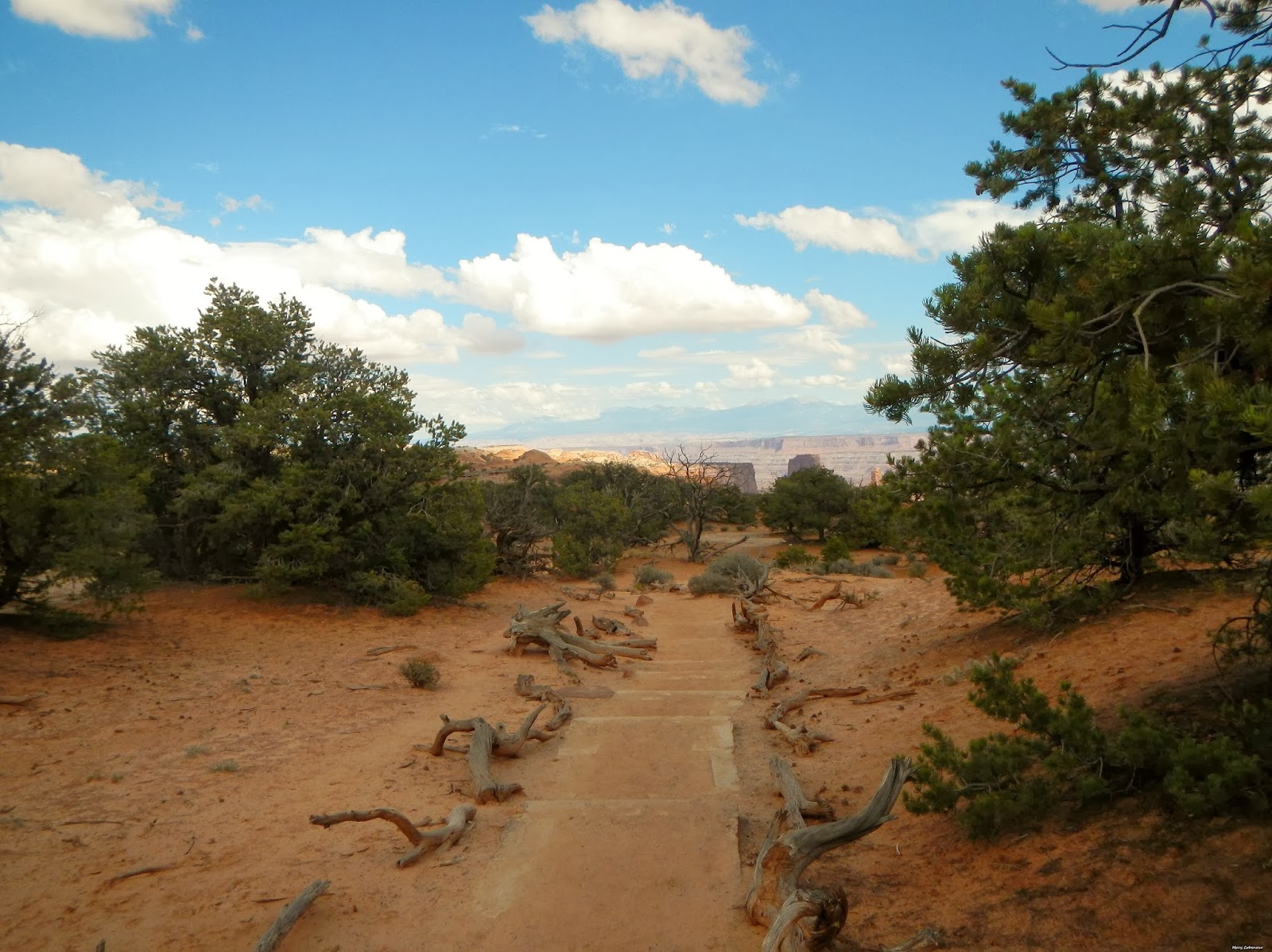 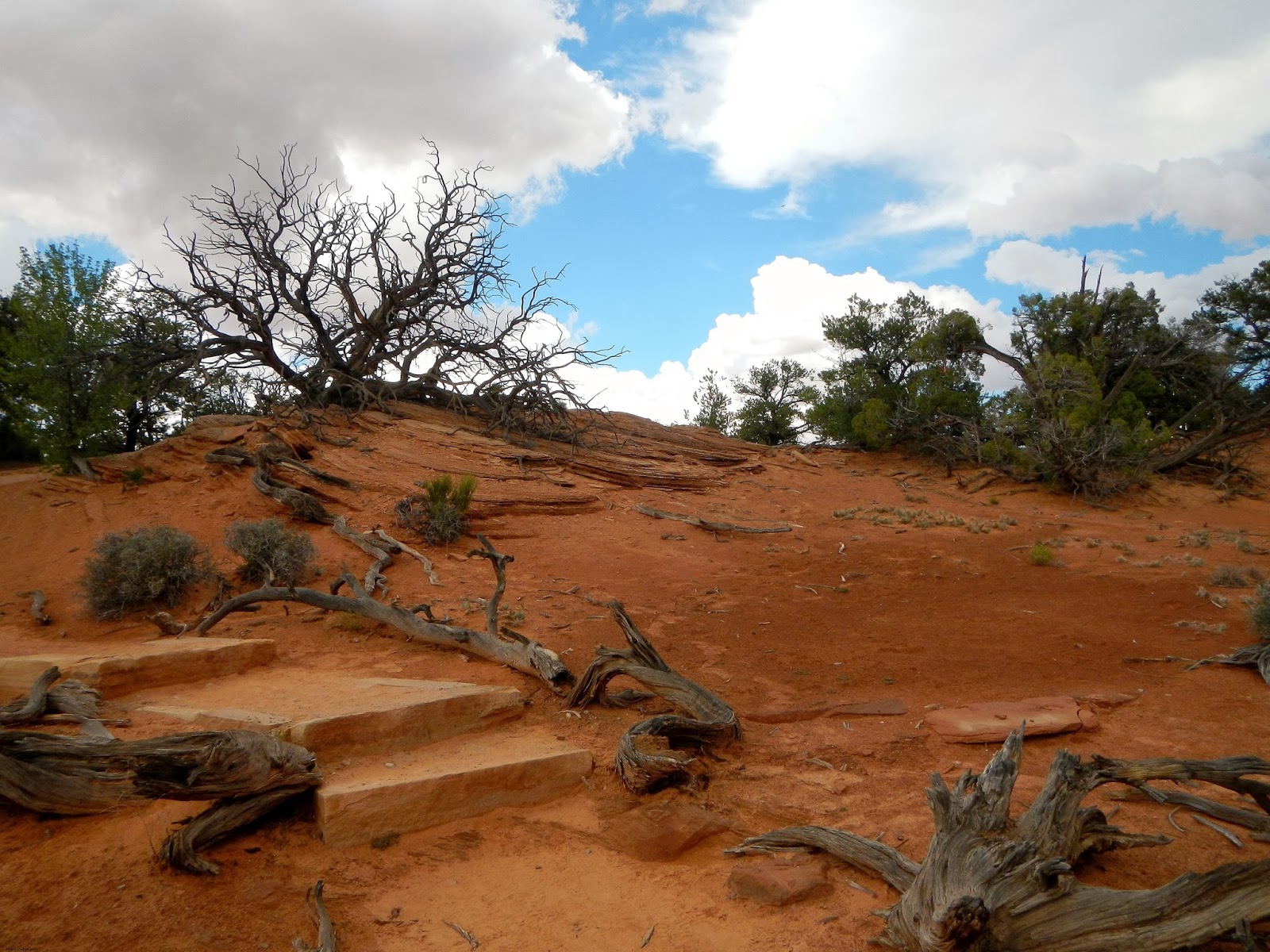 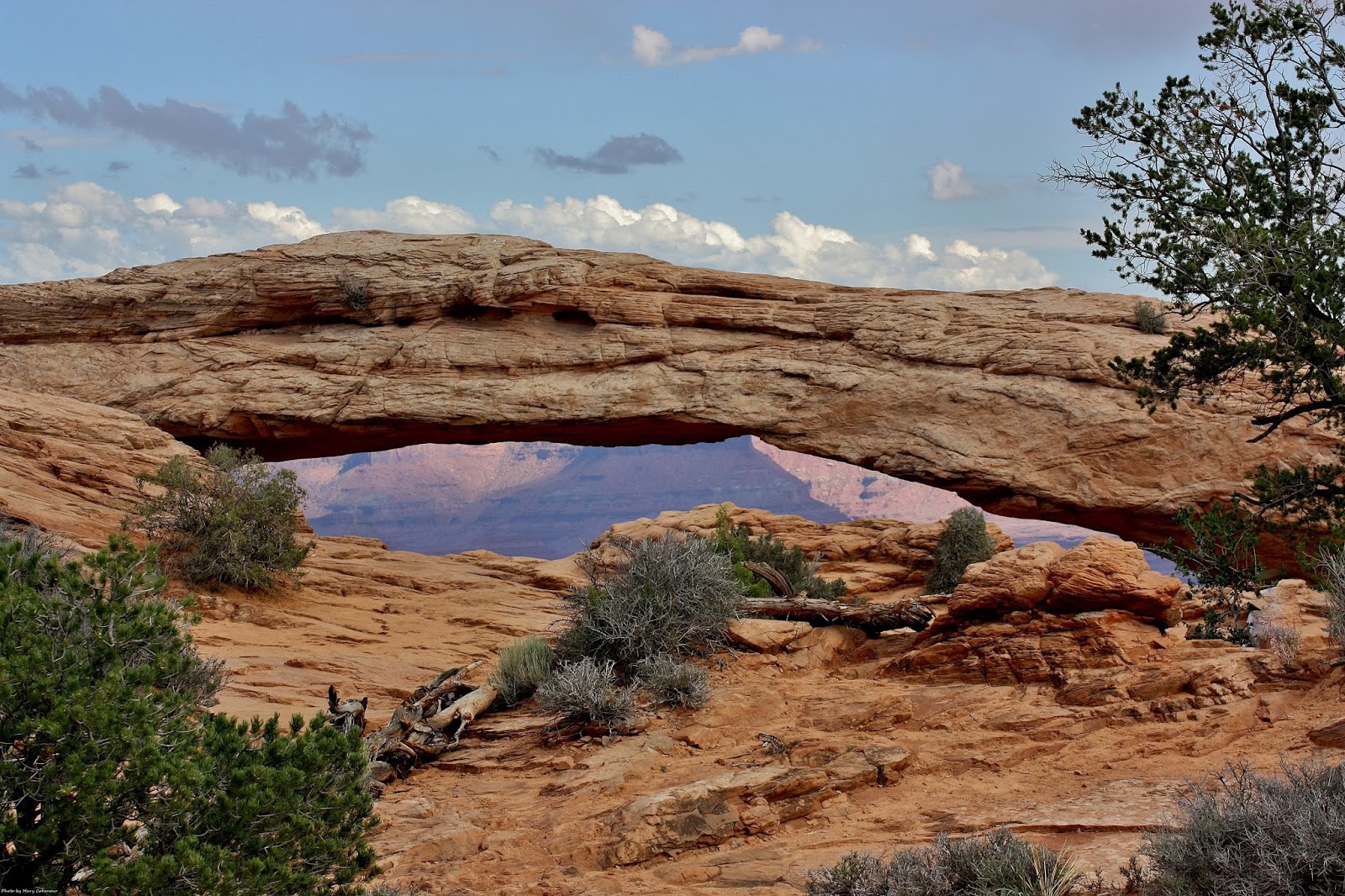 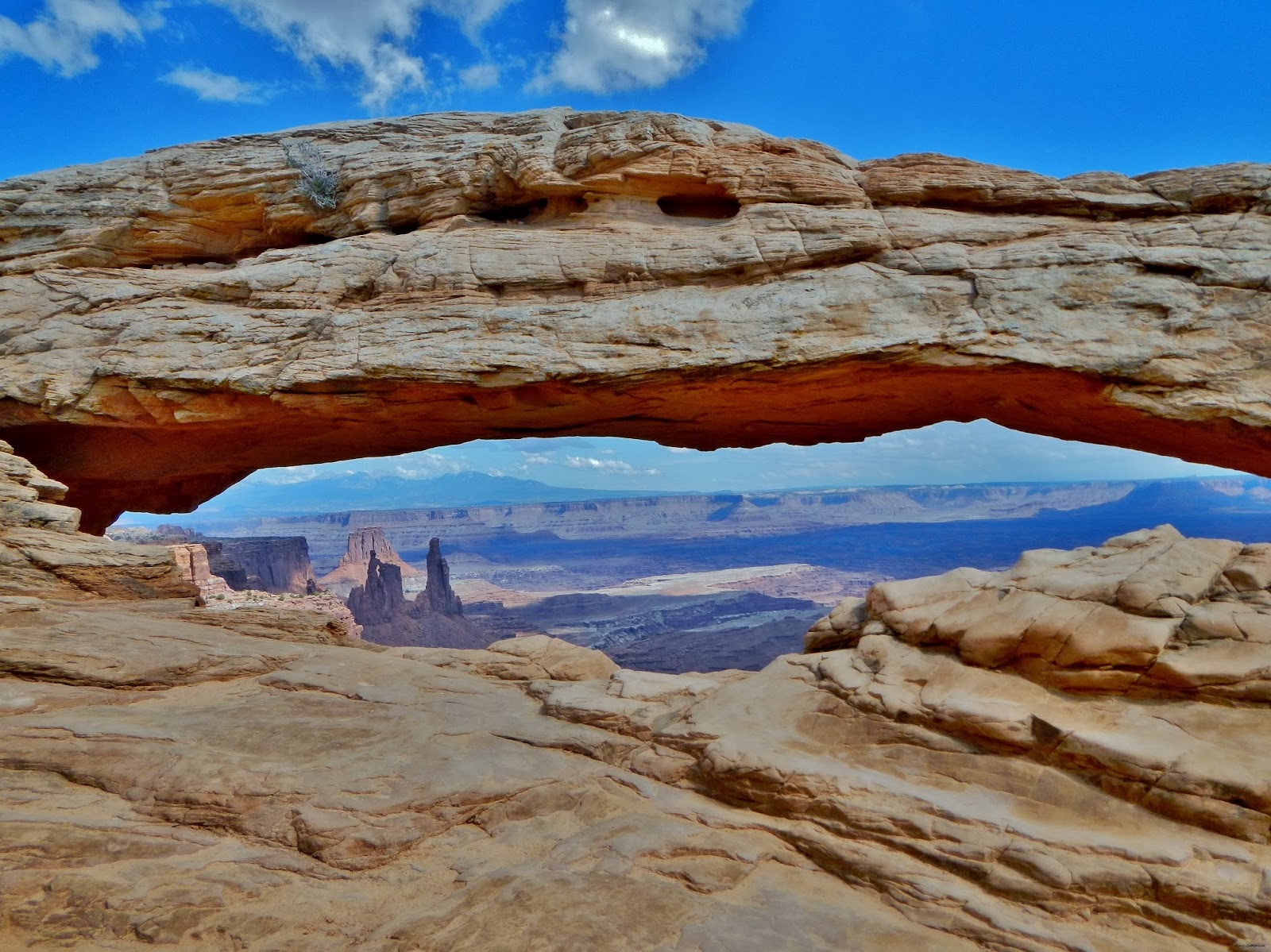 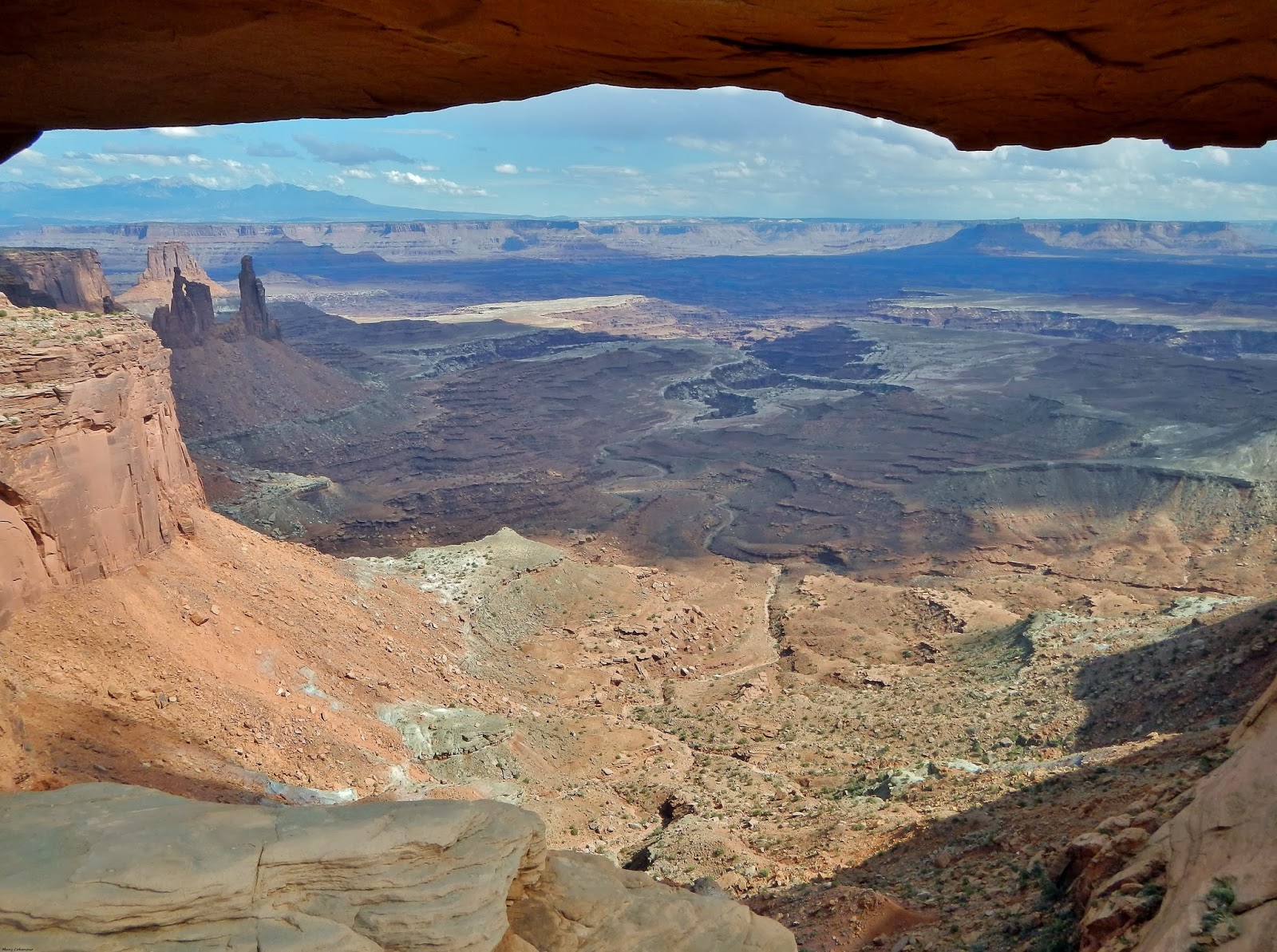 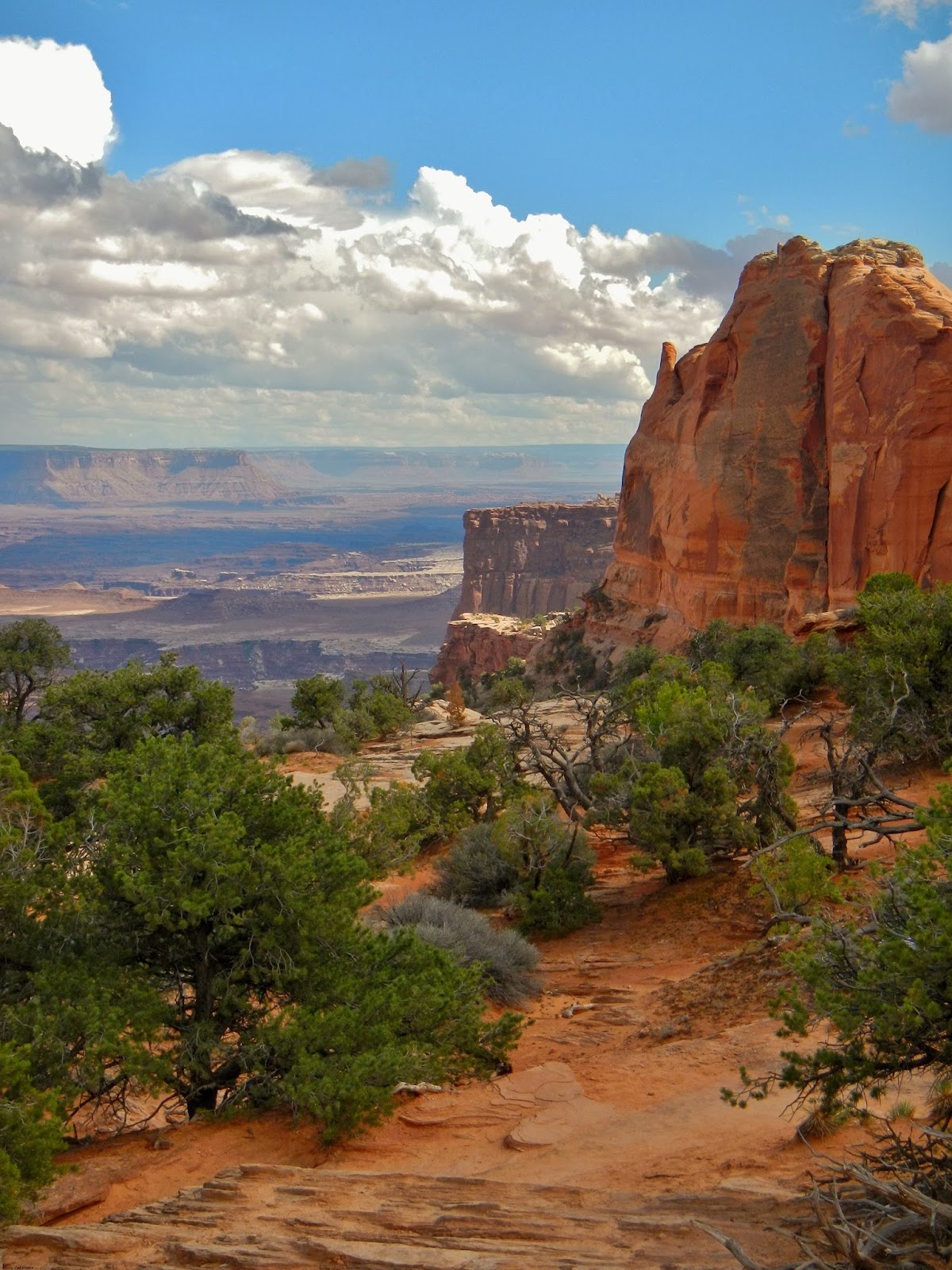 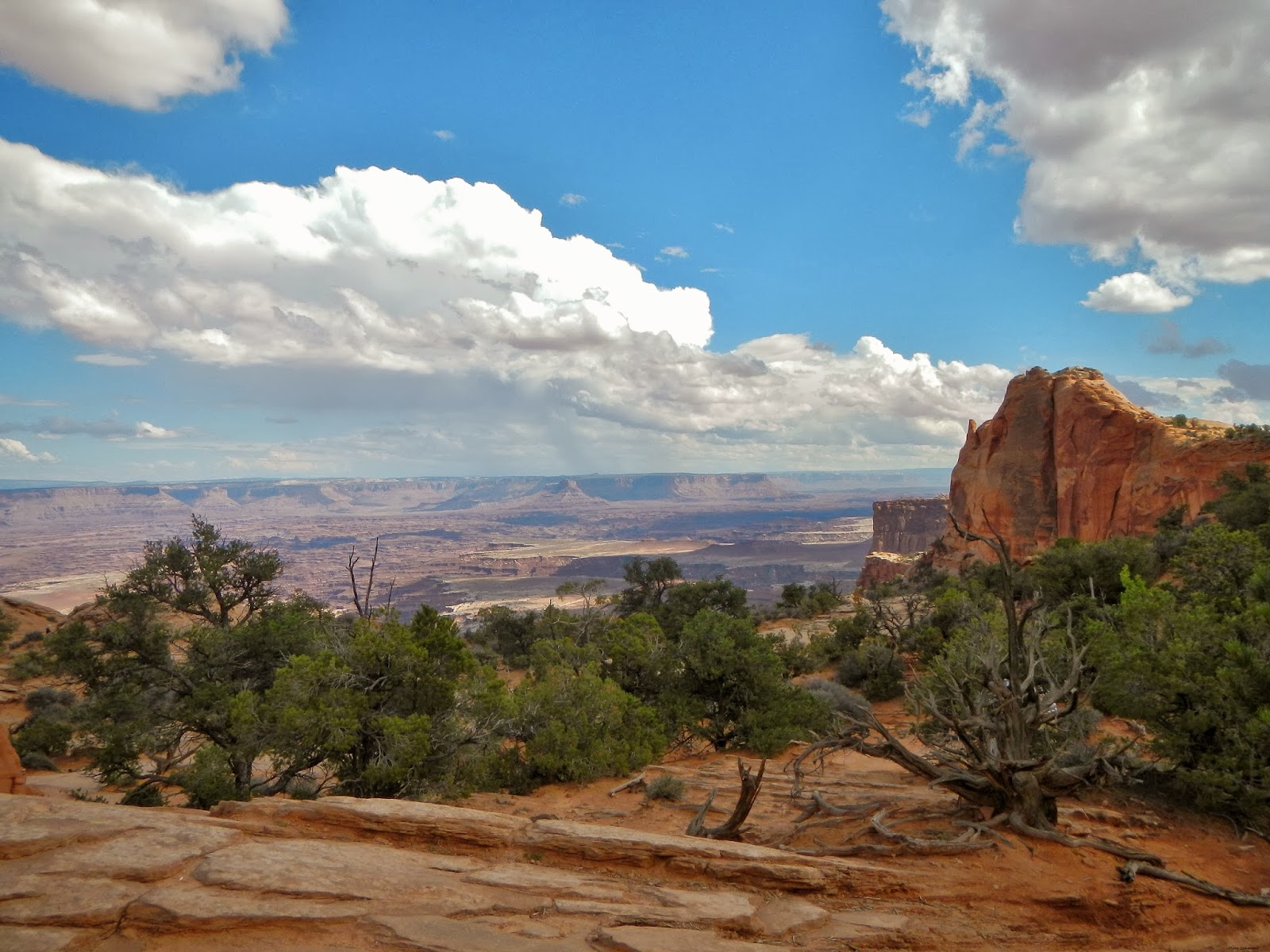 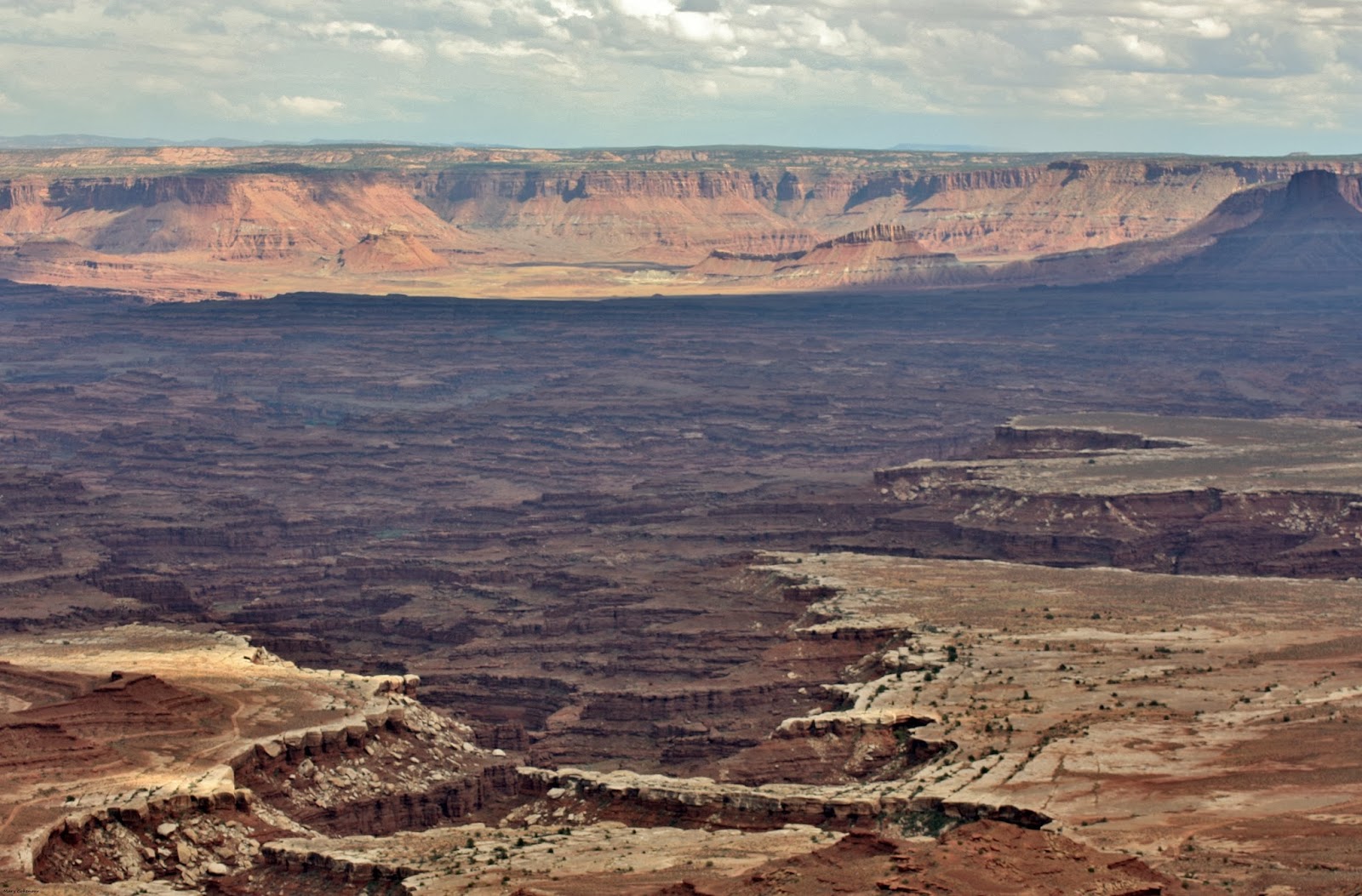 This is the end of Part One; the beginning of Route 313 into the Park and down to Mesa Arch.  Bet you've been wondering where the map is on this post, well I'm not one to disappoint. 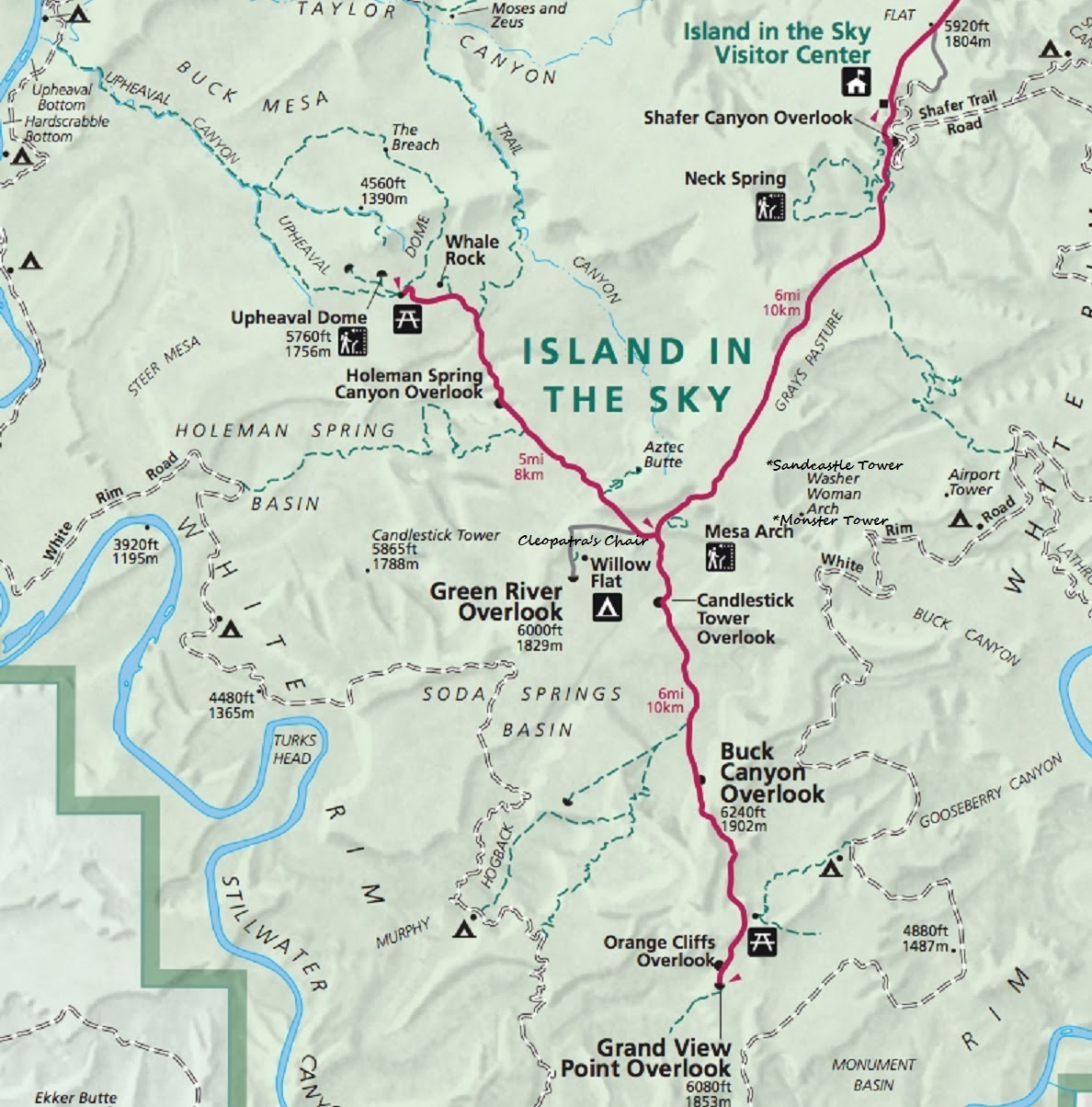 In Part Two, we'll be making the right hand turn at the junction after Mesa Arch; first coming to the Green River Overlook and heading all the way to Upheaval Dome.  Until then...