Today's write up is simply a half mile up the road from the rock art and carvings at the corral.  Keep the map handy that I posted yesterday; that second arrow pointing westward is where we are.  Once again, the climb up and down to the stone walls was fairly easy; a natural stairway, or perhaps one designed by ancient people, but now overgrown, exists.  Once up to the walls, the walk across is several hundred feet, the artwork extends that far! 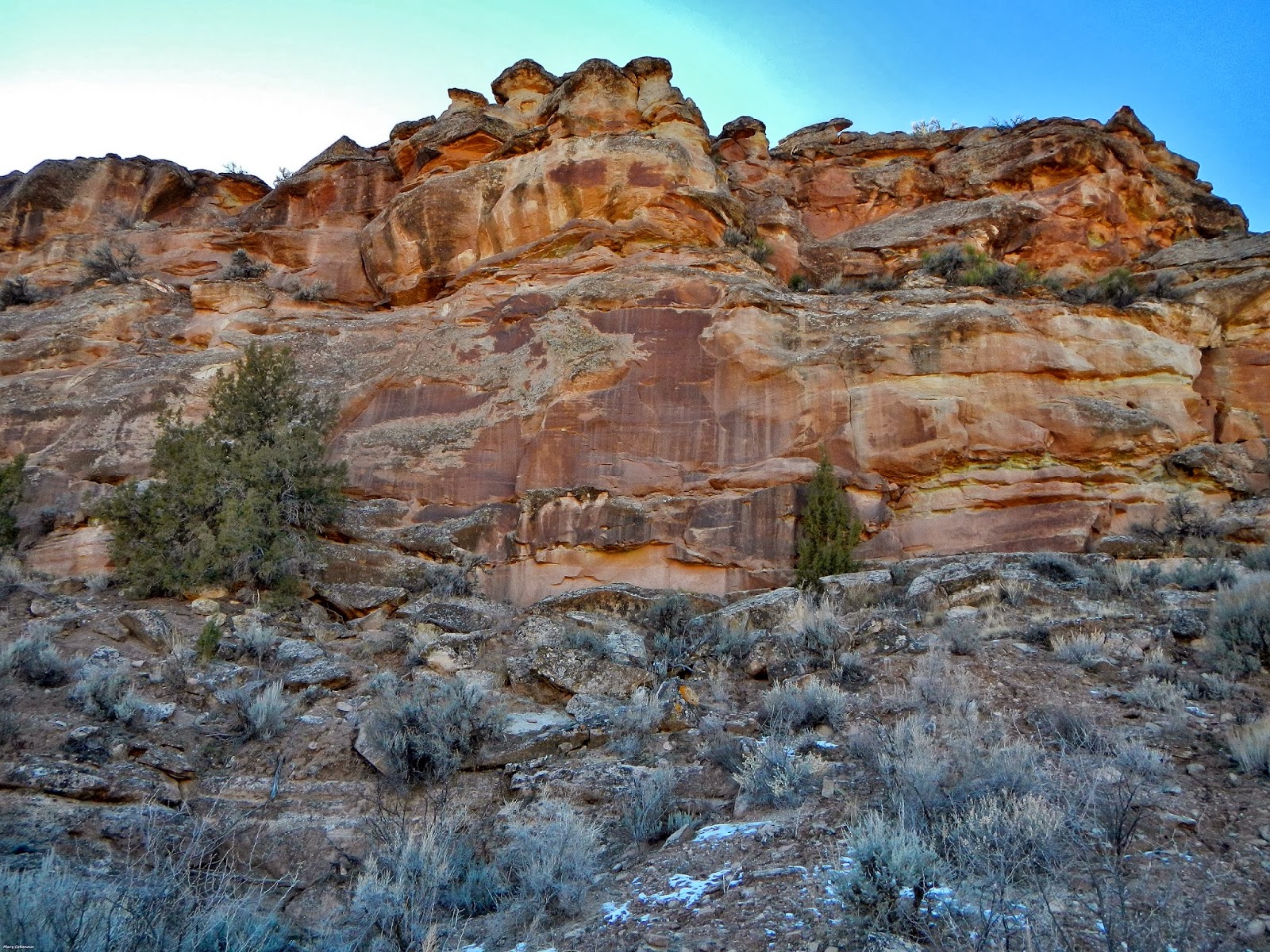 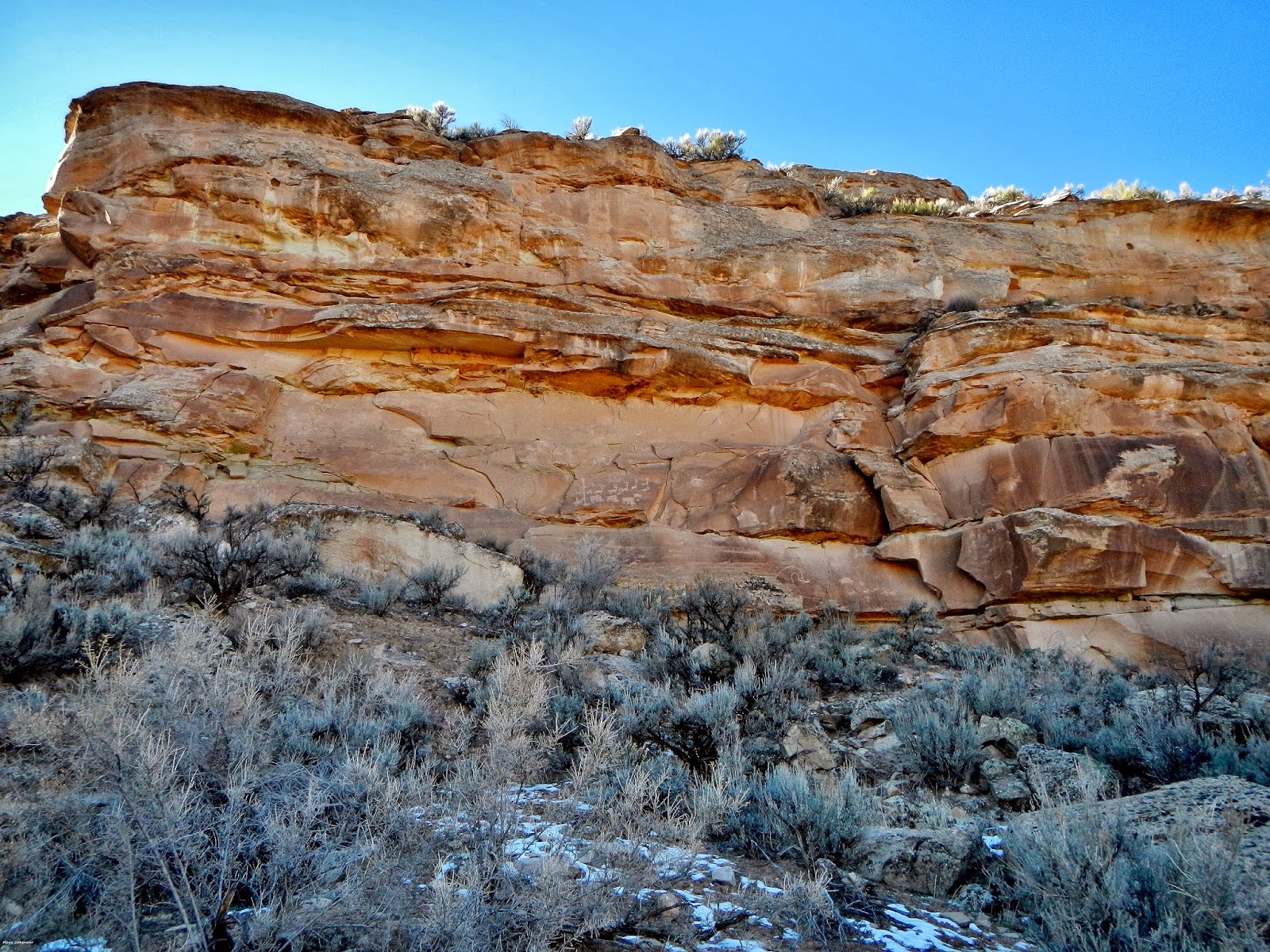 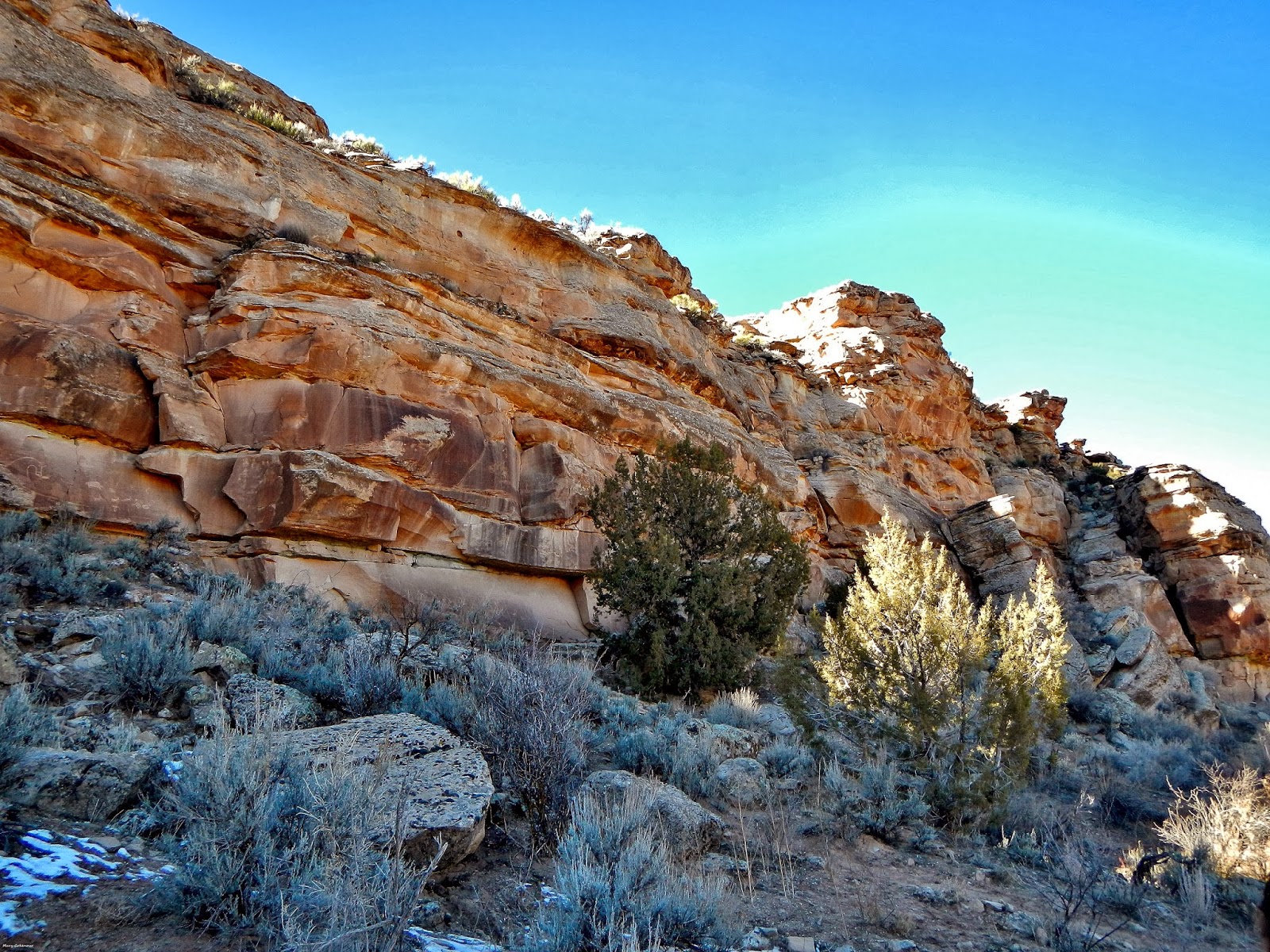 From the roadway, "The Tall People" is what will catch your eye at first; this area of artwork is painted on and clearly different in style than the other panels.


Look to the right of "The Tall People" and do a little walking to find "The Hunt"; a grouping of Elk and Buffalo being hunted by three individuals on horseback, with bows and arrows.  There is also a flute player and another humanoid maybe holding a basket.

Nearby (lower right to "The Hunt") is the spectacular "Horse's Head", it's tongue seeming to be drawing an insect (scorpion?) towards it.  At first I thought it was only the head, but on closer examination,  it's possible that there was also a body depicted.  However chipping of the rock wall, mold and algae have destroyed it; this would have been a rather large drawing.


Looks like this lone young Elk was able to hide from the hunters and watch helplessly as his herd was hunted down.


Then we come to "The Panel", a jumble of animals, humanoids and geometric shapes, which is farther along to the right of the "Horse's Head" and at a lower level.

There is some artwork closer to the roadway though, if you look at the first photo of the SUV parked off the road, there is a jutting wall to the upper right.  Just as you turn that corner, look upwards slightly; you'll have to stop your vehicle, if you blink, you miss it.  It took us two tries before we found them; basically they are further away from the main panels and didn't think to keep our eyes open for more.  This depiction of birds is something that is a rarity; they quite possibly represent the "Great Blue Heron" which can be seen from Alaska to northern South American.  In Utah, it is often seen at lakes, ponds, rivers and marshes; so seeing it in Montezuma Canyon would not have been unusual at all.  Montezuma Creek runs throughout the canyon and there are many areas for the water to pool to create a habitat for the Heron.

﻿
Keep on looking though while in this area, there are several more drawings nearby; the lower panels look insect like, notice how the one on the right has five digits while the typical number is three. 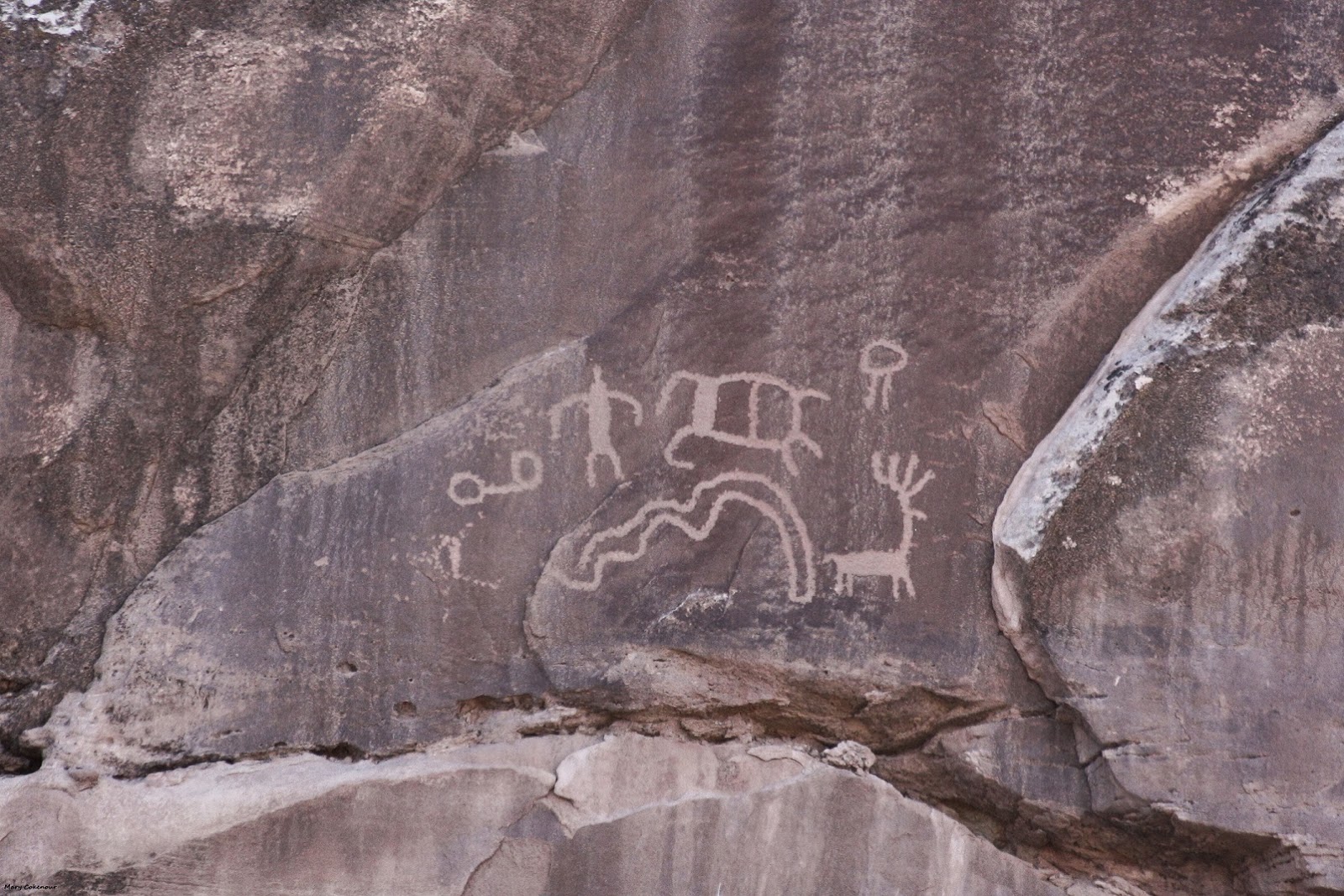 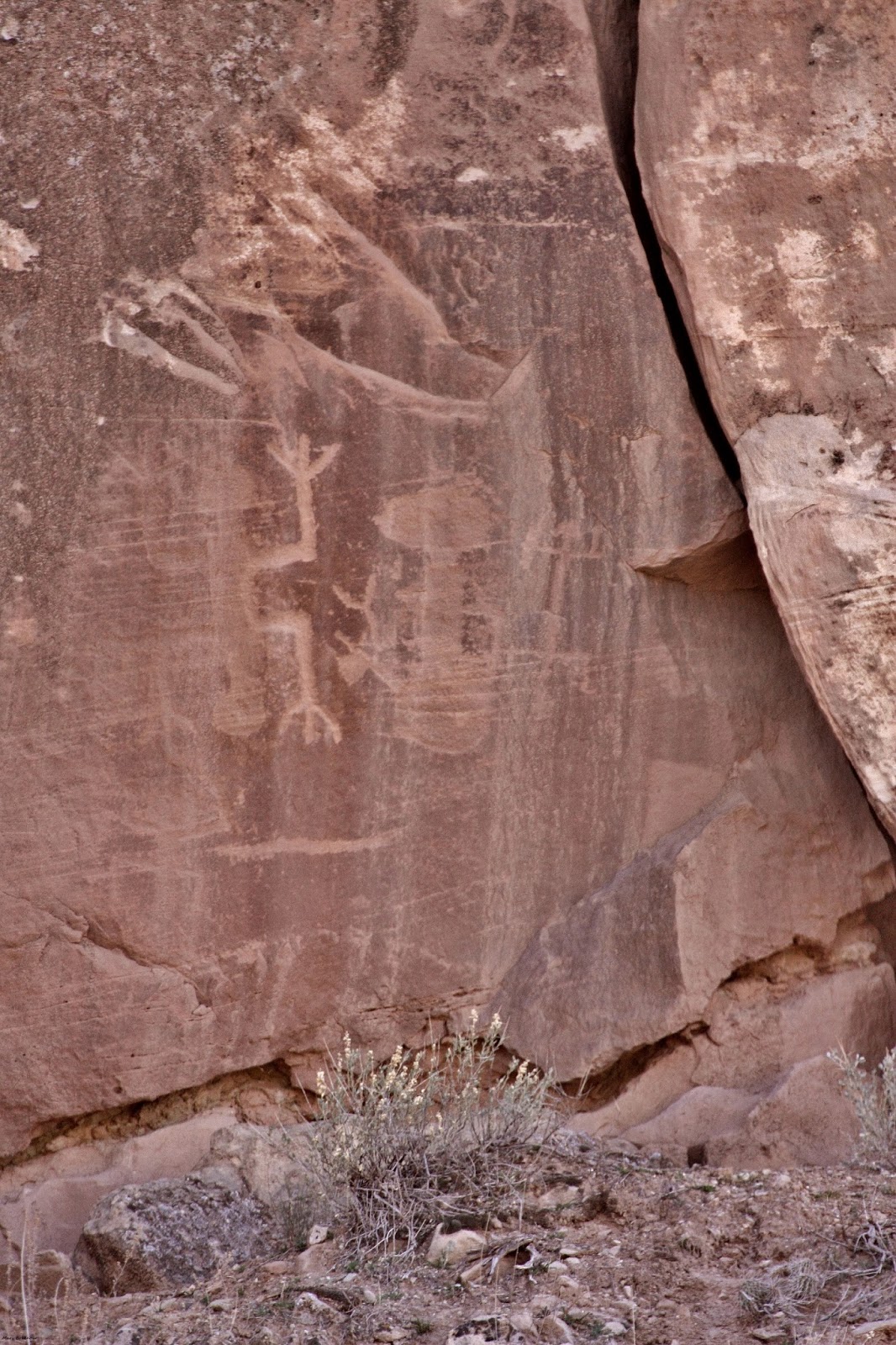 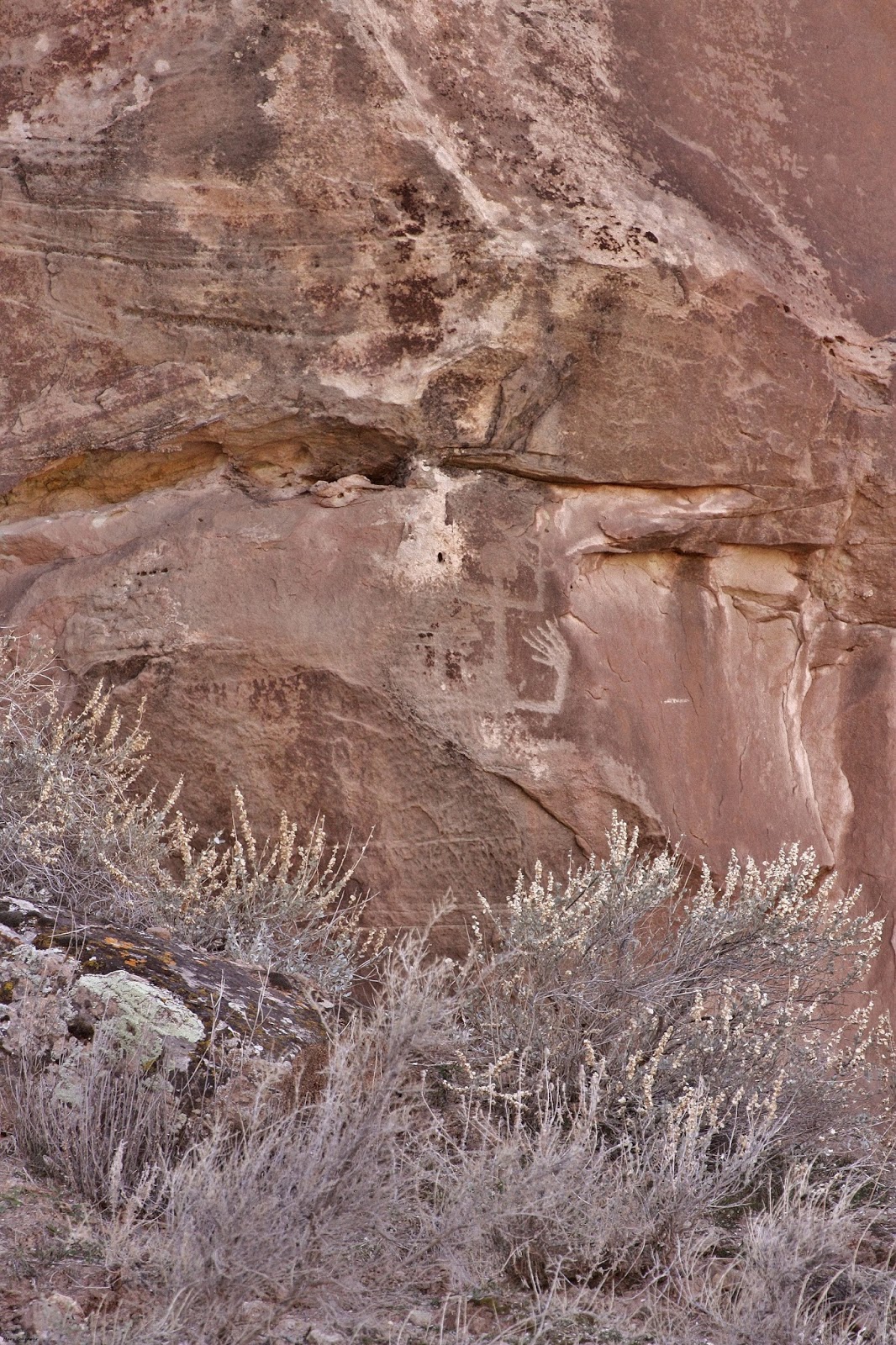 ...and that is the gist of what we found in this area, this time.   As I mentioned before, we've been to Montezuma Canyon four times, and each time we find more than we had seen before.  That is, what we have seen from the roadway; who knows what treasures are hidden in the abundant number caves, alcoves, and canyon offshoots all along this amazing roadway?