Preservation (Merriam - Webster)
1 - to keep safe from injury, harm, or destruction; protect
2 - to keep alive, intact, or free from decay; maintain
3 - to keep or save from decomposition

Coming from the East coast of the United States (New York and Pennsylvania), destruction of historical structures in the name of progress seems to be a given.  Larger, more modern structures mean larger incomes to the land owners; those who try to prevent the destruction don't have the finances to prevent it.  The East coast is much older in settlements than the Southwest; doesn't mean the same isn't happening out here though.

The most historical structures in the Southwest are the Native American settlements; though only ruins now, for the most part, they still tell the story of those who were here before.  There are government agencies and archaeological groups that try...yes, try...to preserve, but lack of manpower and finances can only do so much.   Destruction of ruins and grave sites began with the original pioneer ancestors and continues with their modern day prodigy.  In June 2009, many citizens of San Juan County (several prominent ones at that) were busted in a Federal sting operation.  Surprisingly, the community was torn between supporters of the thieves and those disgusted and embarrassed by their actions.  Lets put it in perspective, the desecrated sites belonged to ancestors of the Native Americans who still live in the area; but that's ok since those ancestors are all dead, the artifacts bring in loads of cash, and who cares anyway.  Well then, it should be alright then to go to the grave sites and historical structures of the pioneers, that are still preserved, to rob and destroy them?  What's good for the goose is good for the gander, right?  Excuse me while I take a moment to laugh as I picture locals having seizures over the idea of this.


Since I've now given you a moral puzzle to mull over, lets get to the gist of this post, Browns Canyon Ruins.  This ruin site is located 4.5 miles outside of the city of Blanding, along Perkins Road (CR 206); you will pass them on your way to visit Three Kiva Pueblo.  Finding any information about them was almost impossible; I said almost.  First I called Edge of the Cedars State Park and Museum; a center for Native American preservation in San Juan County; they'll know, right? Wrong; the woman I spoke with didn't have a clue as to the area I was describing (even after displaying photos on Facebook), and told me to contact the BLM.  I spoke with a gentleman at the Monticello Field Office who had lived in Blanding, "Oh, we always knew them as the Browns Canyon Ruins", but that is all he could tell me.  Then I spoke with a retired BLM ranger who informed me that not all sites under the jurisdiction of the BLM are maintained; it all depends on how well preserved they already are.   These ruins are mostly used by locals as a "hang out" where they can drink alcohol (broken beer bottles and empty cans attest to this) from the prying eyes of the city elders (Blanding is a 100% dry town).   How sad; not even an informational plaque exists at the site to give any historical facts about the ruins (how old, what peoples occupied them, who were they named after).

Alright, lets bring Browns Canyon Ruins into the light and give them some respect. 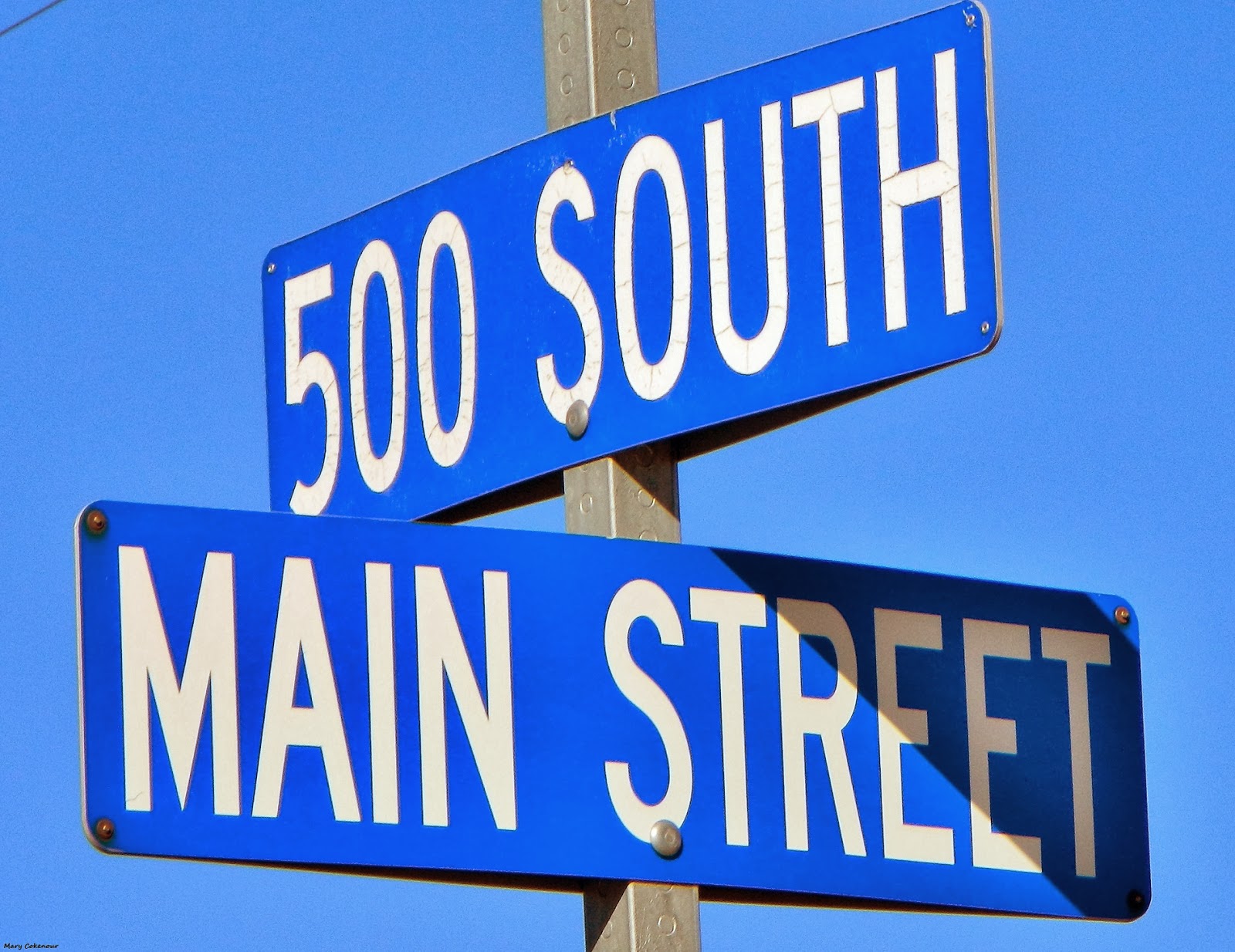 To reach them, from Main Street in Blanding, turn onto 500 South heading East; one mile down the road will curve and become 1100 East/Dairy Lane.  There will be many ranches, including an Elk ranch and you can tell this area is where money lives. 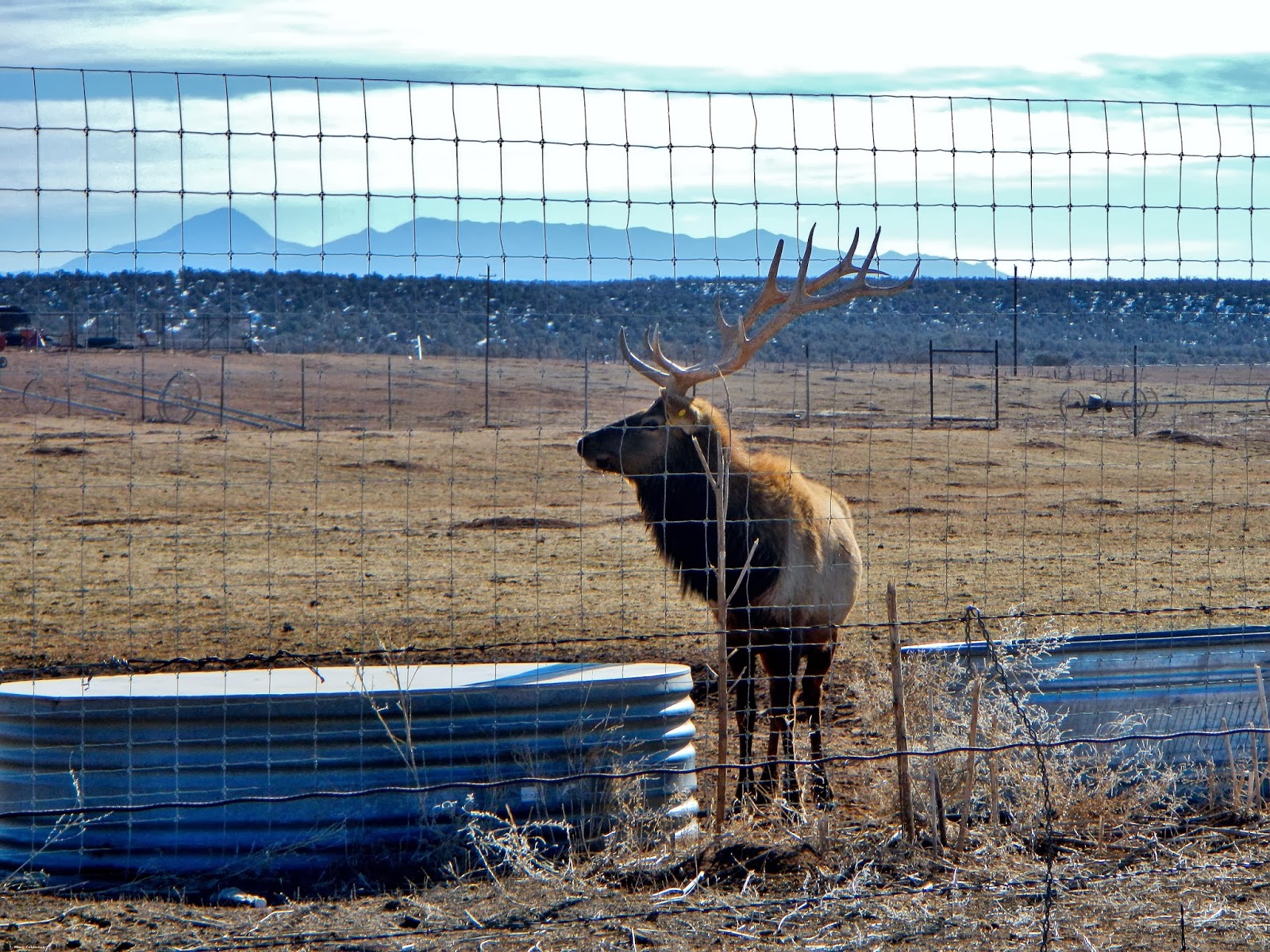 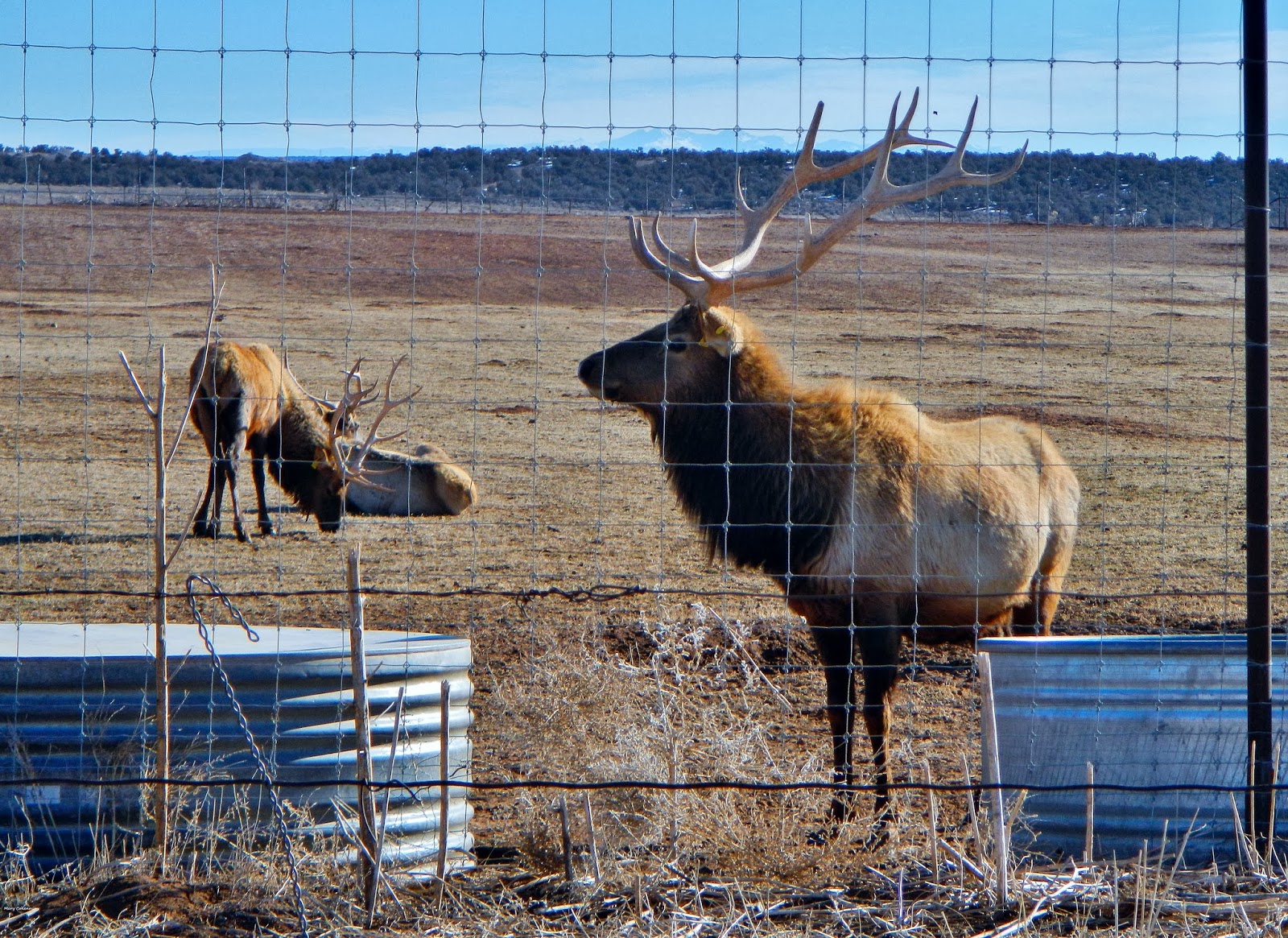 At mile 2.3, the road becomes graded dirt/gravel and you're now on Perkins Road (CR 206); while a scenic drive, don't be surprised to see utility vehicles as there is oil drilling in the area. At mile 4.4, the road begins a steep descent and squares off at the ruins (mile 4.5). The multitude of caves are located on all levels, from the ground to the various ledges that stretch across and inward; the western side is closed off by a metal cattle gate. 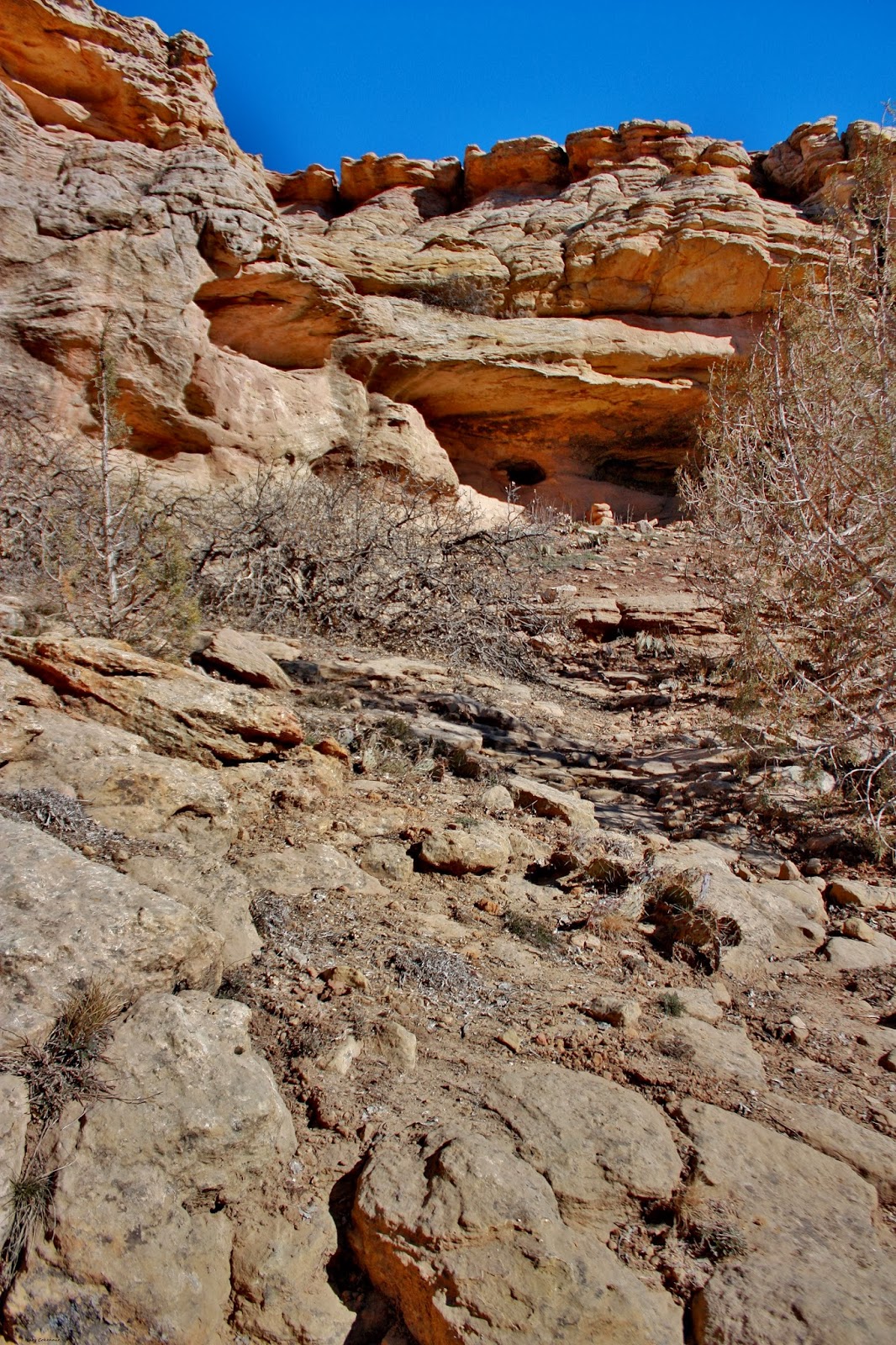 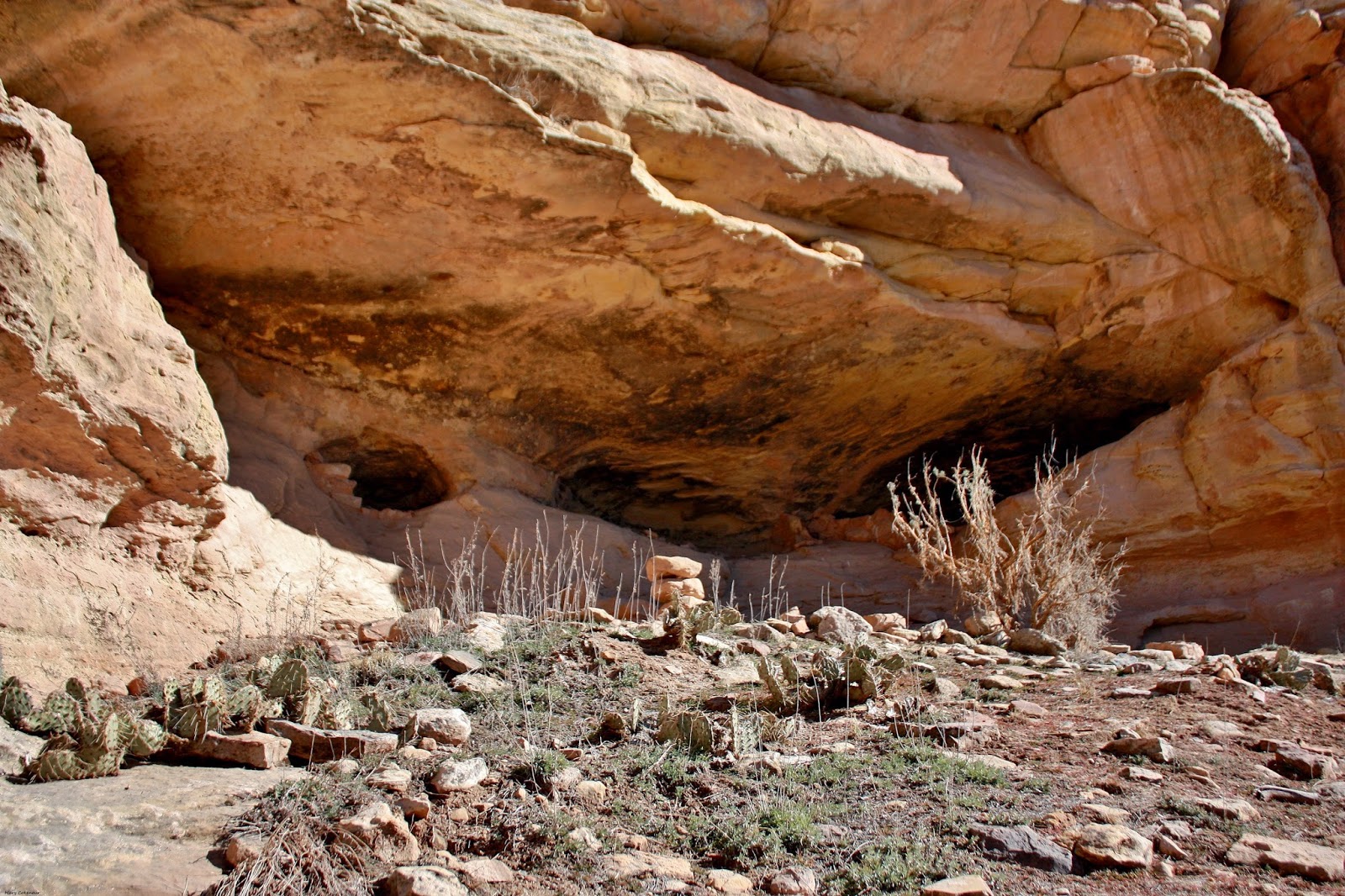 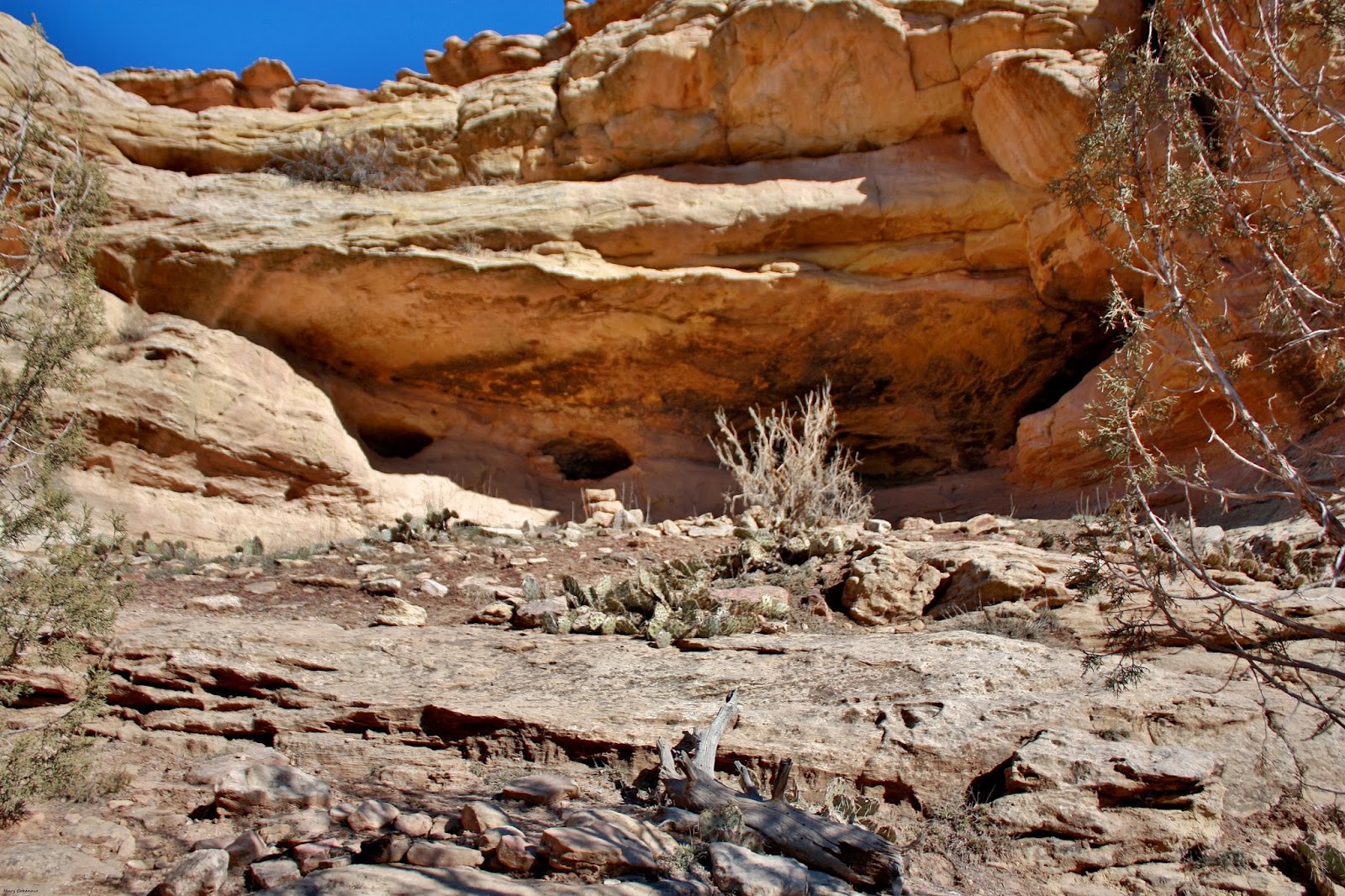 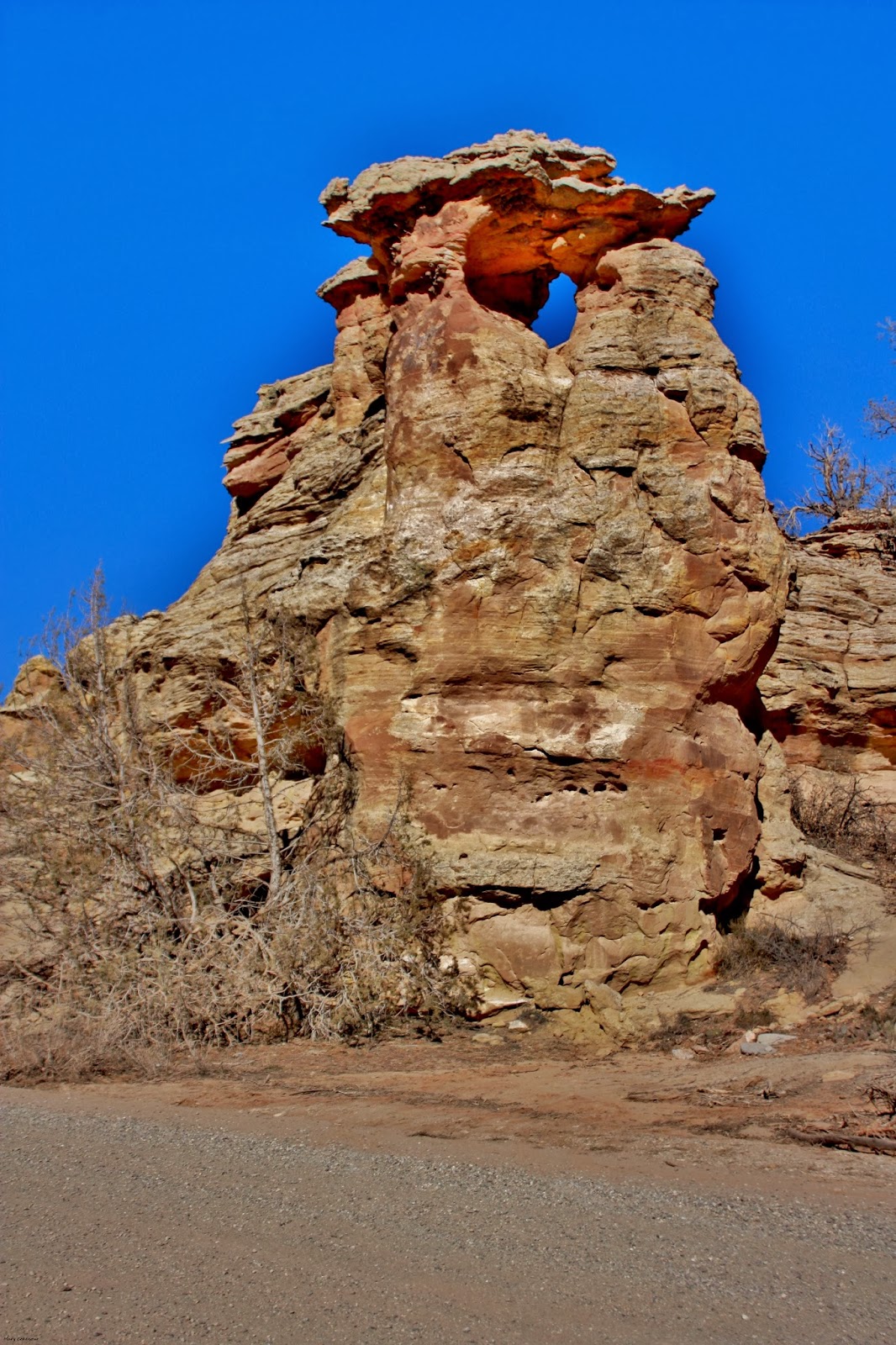 One outstanding feature is the tall sandstone formation attached to the western front of the ruins.  It resembles a Chanterelle mushroom; its filigree top forming an arch type opening. From the side view, it is close in resemblance to the "Seven Sailors" located in the Valley of the Gods; a small cave holds remnants of ruins within. 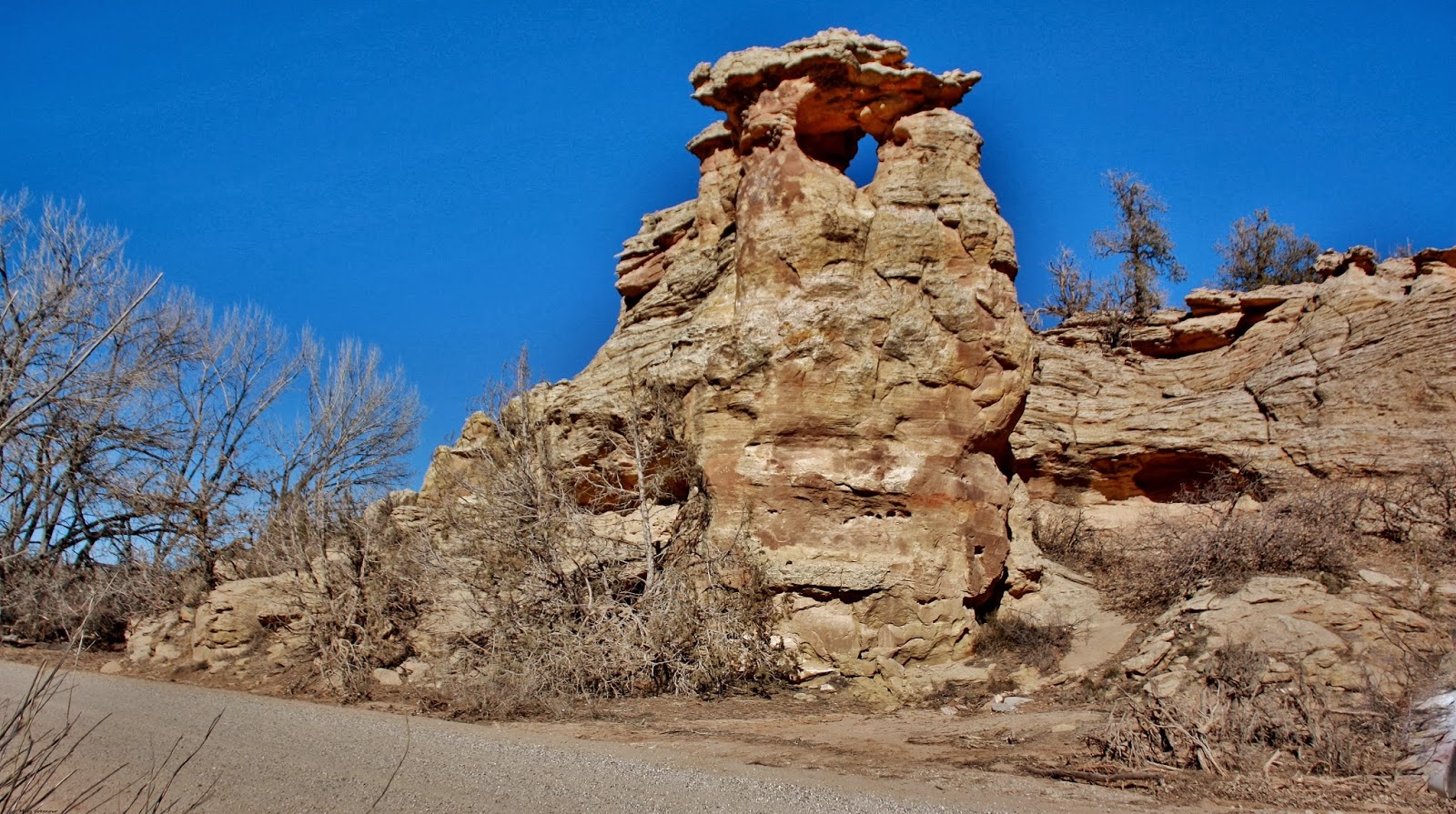 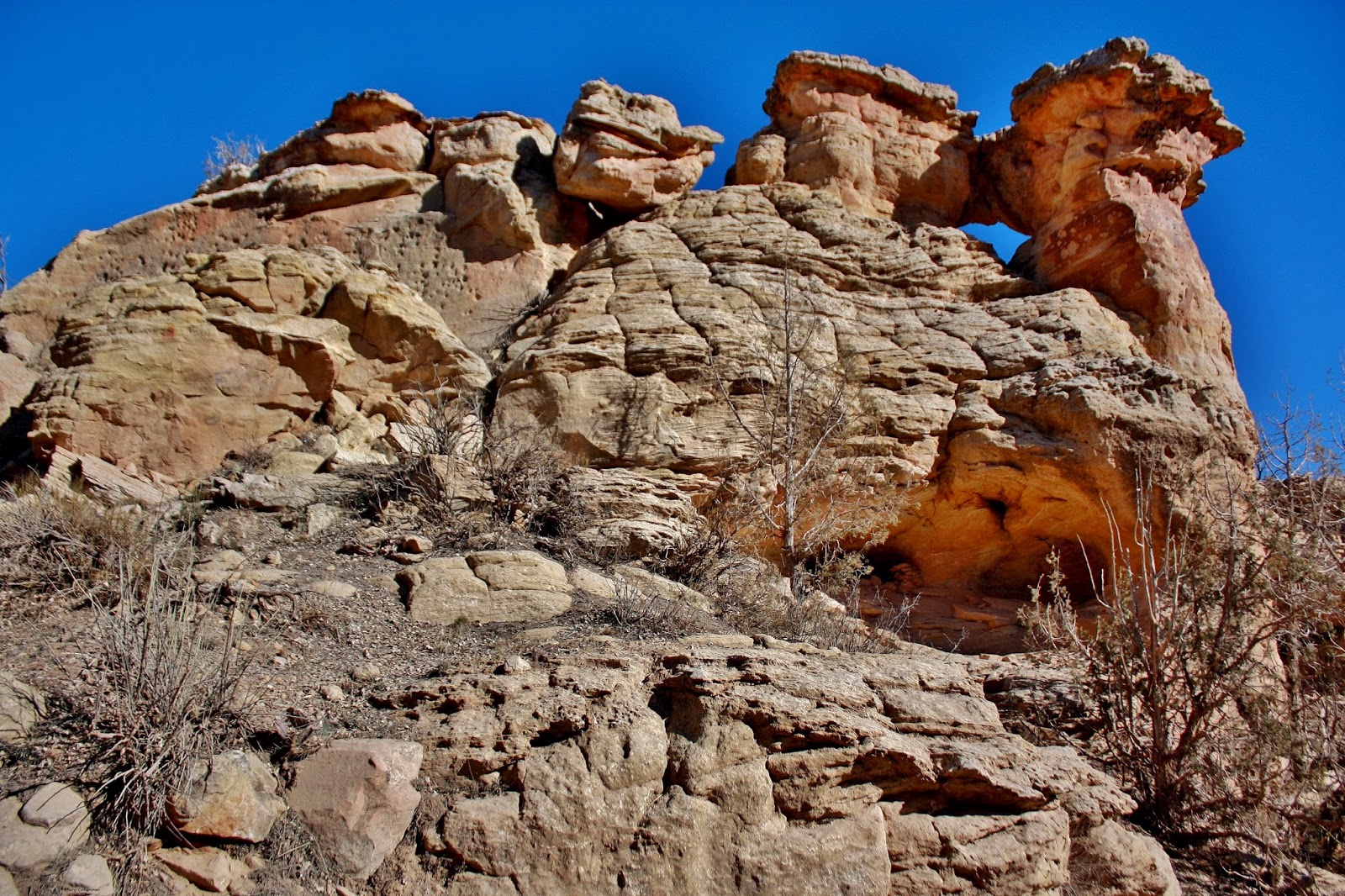 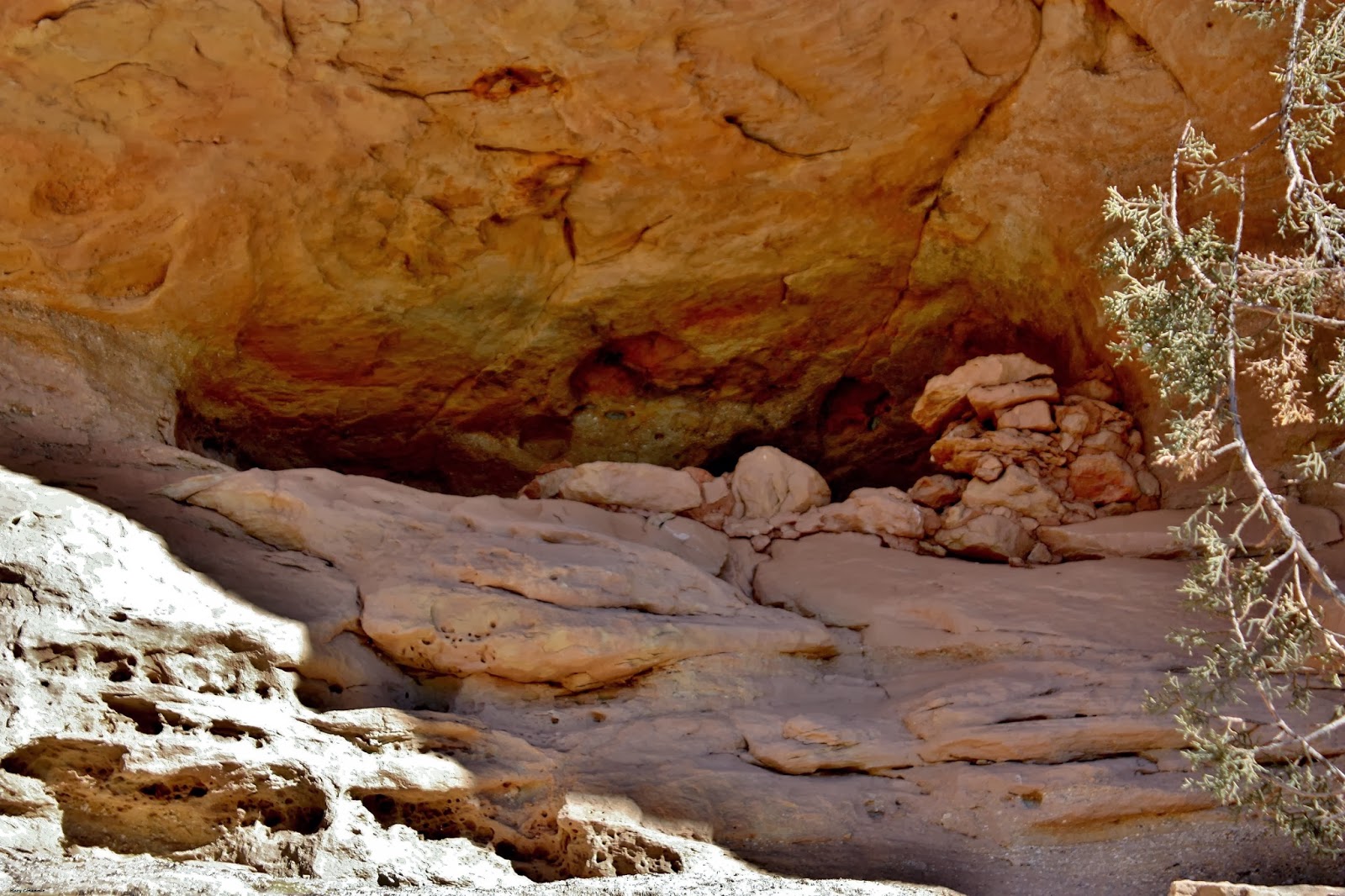 With the zoom lens, I was able to get a couple of shots of caves on the western side even though it is closed off. 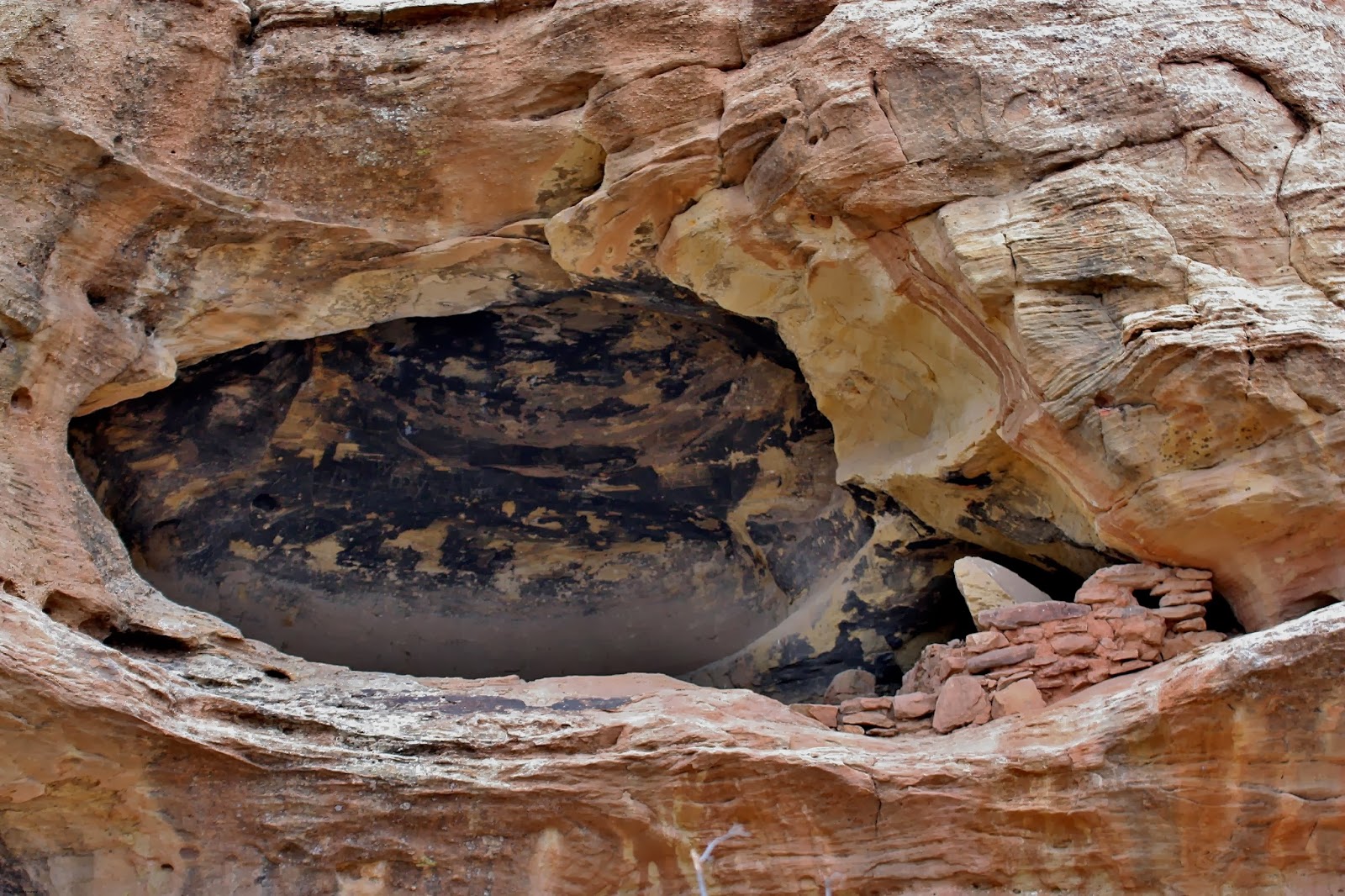 Climbing up onto, and walking around, the ledges was not difficult; we were able to inspect the interior of many of the caves. Unfortunately, if there was rock art there at any time, the smoke from fires (charred remains on the ground) and graffiti (Joanie loves Chachi and similar nonsense) has obliterated it.   The only mark we left was our footprints on the sand which would be quickly removed by the weather.


Roy sitting outside one of the caves gives the perspective of how large most of them are.


View from the Eastern side, you can see the road coming down from the west. 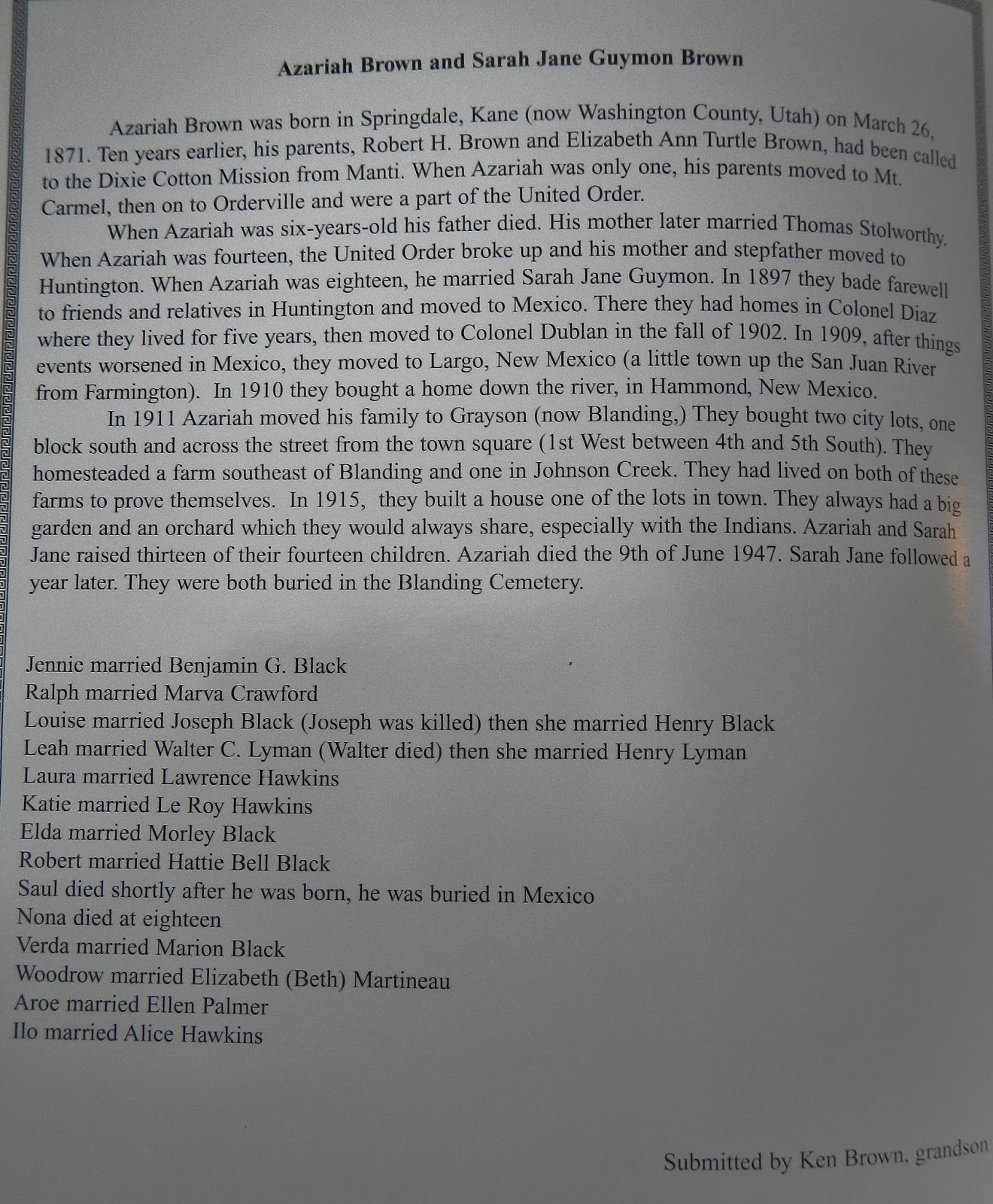 Digging around for more historical information, I learned that in 1903, folks from Bluff moved up to the area they called Grayson; it was renamed Blanding in 1914.  In 1911, the Brown family moved from New Mexico and settled in; as with most places in the area, the ruins are named after earlier settlers.  They're written about in "Western Pioneer Settlers, Vol. 1 - They Came to Grayson", published 2005 by Ridgeway Art Gallery, featuring the artwork of Kelly Pugh. 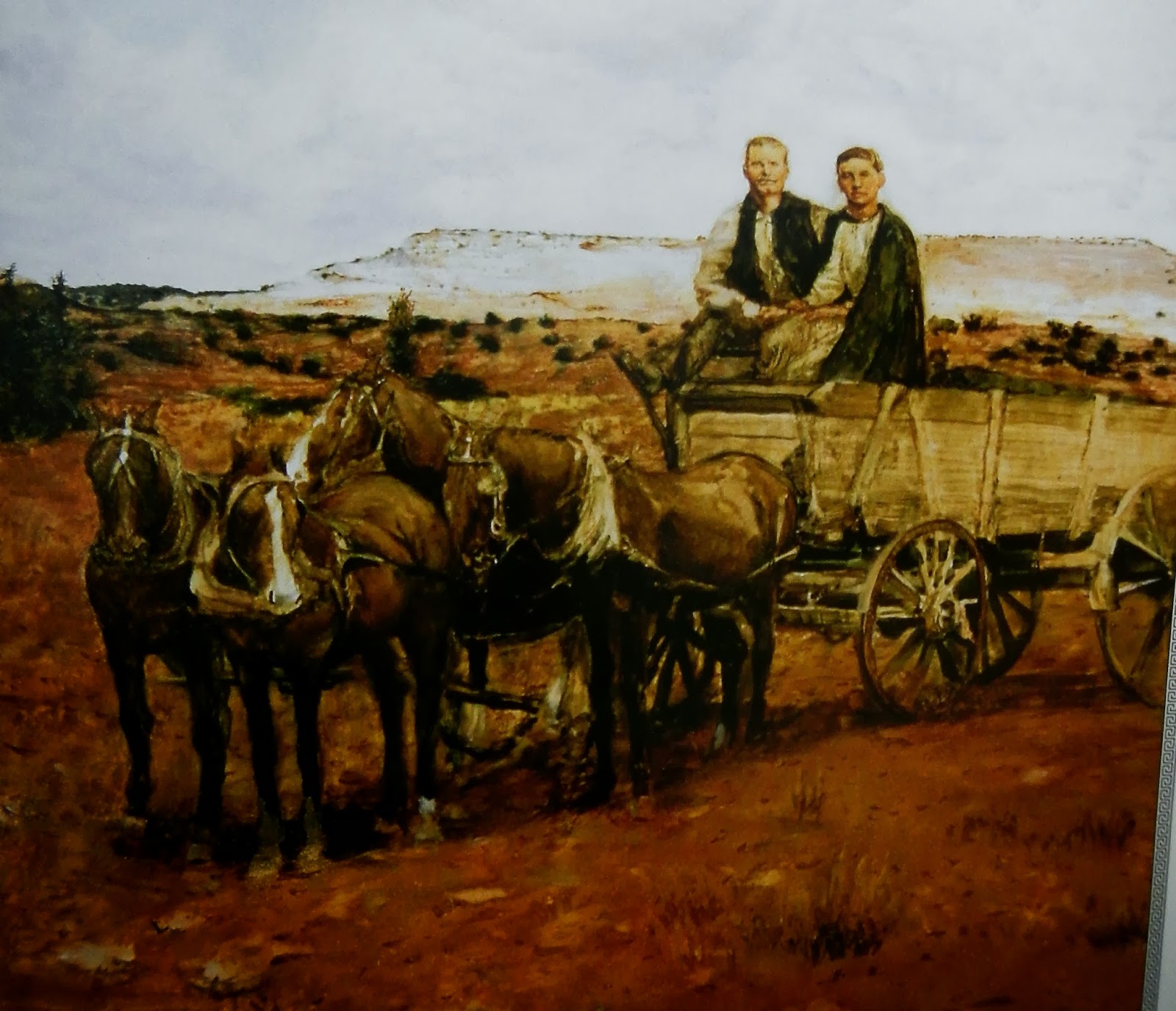 So there you have them, the Browns Canyon Ruins; and my only question now is, when does it get its Historical Information Plaque?

Mary Cokenour
Posted by Four Corners Foodie at 10:54 AM