Driving down Route 491 to Cortez, we always see the signs for Lowry Ruins and Hovenweep National Monument; we've been to Hovenweep, but keep saying, "we need to go to Lowry Pueblo Ruins one of these days". This week we finally made it there, it was iffy at first with dark clouds moving in and the temperature dropping, but that was in Monticello. The plan became, if the time we get to the road to the ruins and the weather is the same, we'll put it off for another day again. However, the weather gods were looking out for us; the sky became clearer around the Lowry Ruins and the temperature was around 50F.

The road to the ruins is MC RD CC (Montezuma County Road CC) in Pleasant View; once you turn onto the road you'll see a cell tower to your right.  It is a paved road, but not well maintained which turns to graded gravel about five miles in; the entire mileage to the ruins is nine miles.  Also, at the five mile mark you'll reach RD 10, and to the left, Hovenweep is only 21 miles away; visiting both in one day is very do-able.  The homesteads along the road are mostly farms; there is also drilling going on for CO2, so many utility vehicles will be passing by.  About mile seven the road will fork, keep on going straight and a sign will help guide you; mile eight is the entrance road (RD 7.25) to the ruins; you'll come to a small parking area (mile nine) with restrooms and it's a very short walk to the ruins themselves. 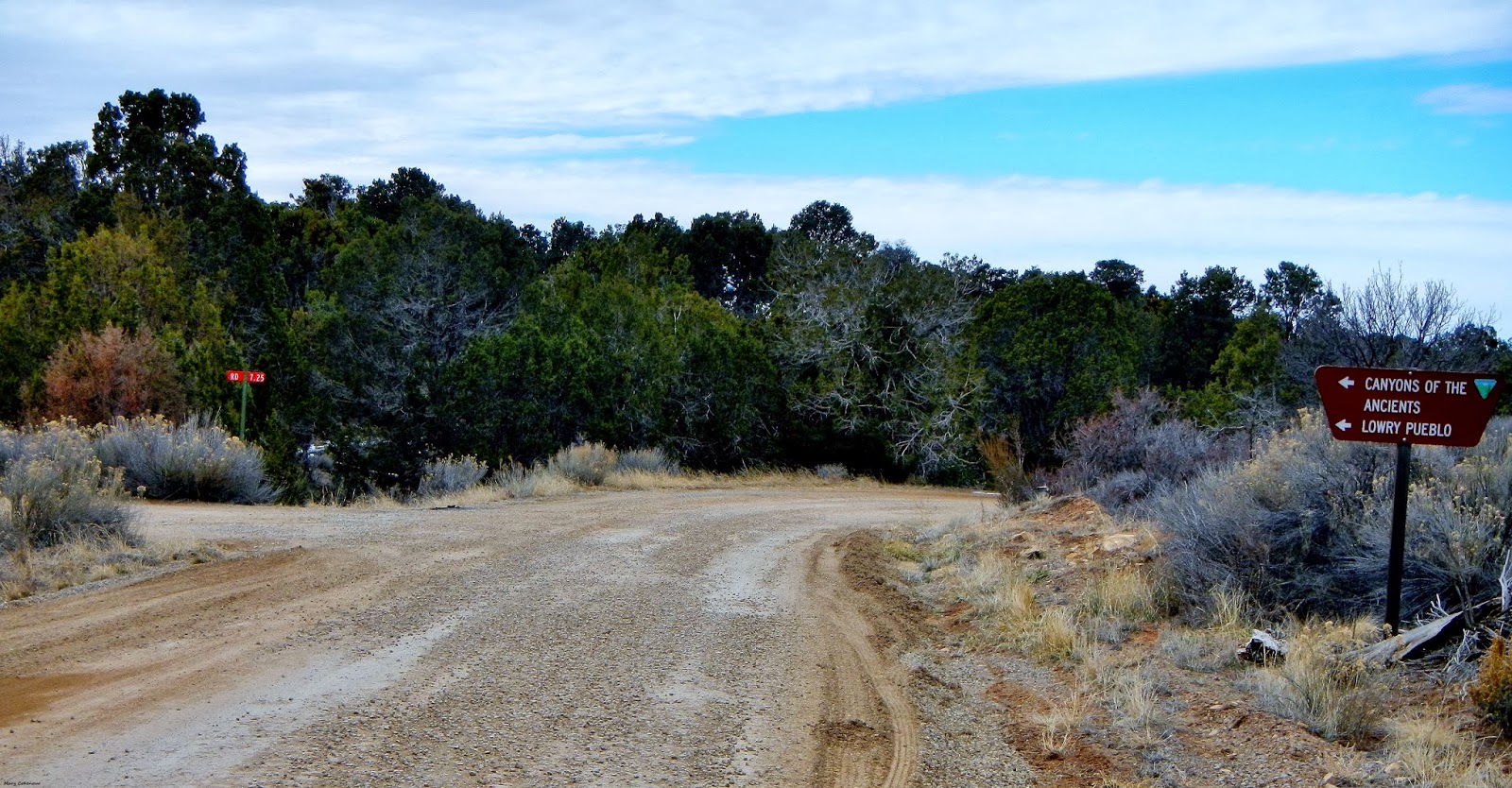 Hint, you'll see a sign directing you to a picnic area; this also leads to the Great Kiva, but don't go there directly if you're not stopping to eat first.  Go up the concrete walkway to the ruins and follow it to the left; the first viewing of the Great Kiva from this area takes your breath away for a second...it is the largest Kiva we have ever seen in our adventures.


Immediately after you pass the "Welcome to" sign, look upwards left and the main section of the ruins becomes visible and you are hit with how large it is.  These ruins were constructed in 1060 A.D. over an abandoned pithouse; they were found and excavated in the 1930s, declared a National Monument in 1964 and incorporated into Canyon of the Ancients in 2000.  Canyon of the Ancients oversees over 6000 archaeological sites; their go-to place for information, and to see a great museum, is the Anasazi Heritage Center.  Now continue left on the walkway to the Great Kiva. 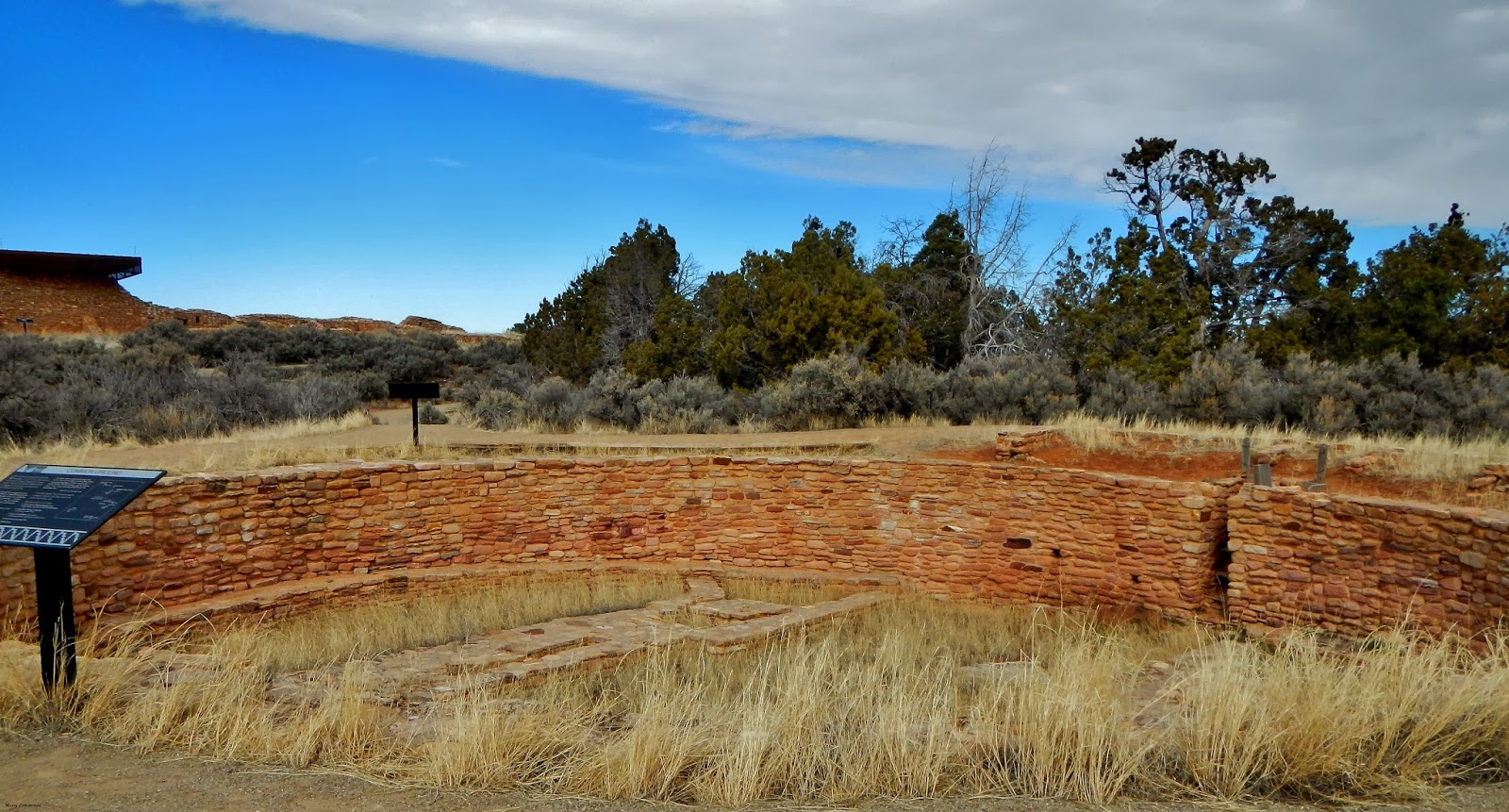 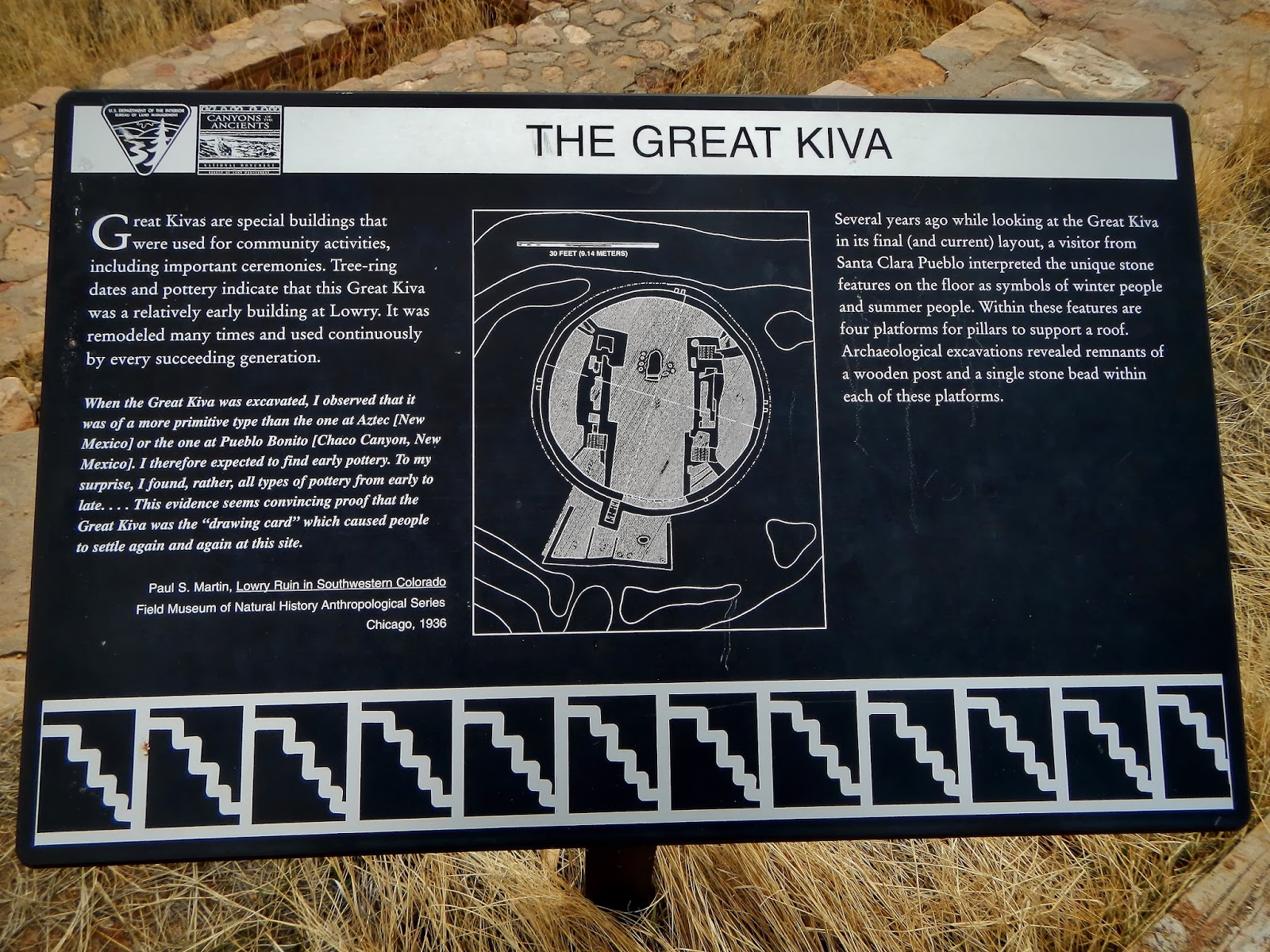 From the Great Kiva, there is a perfect view of Sleeping Ute Mountain; it is east of the main ruins and is 50 feet in diameter. 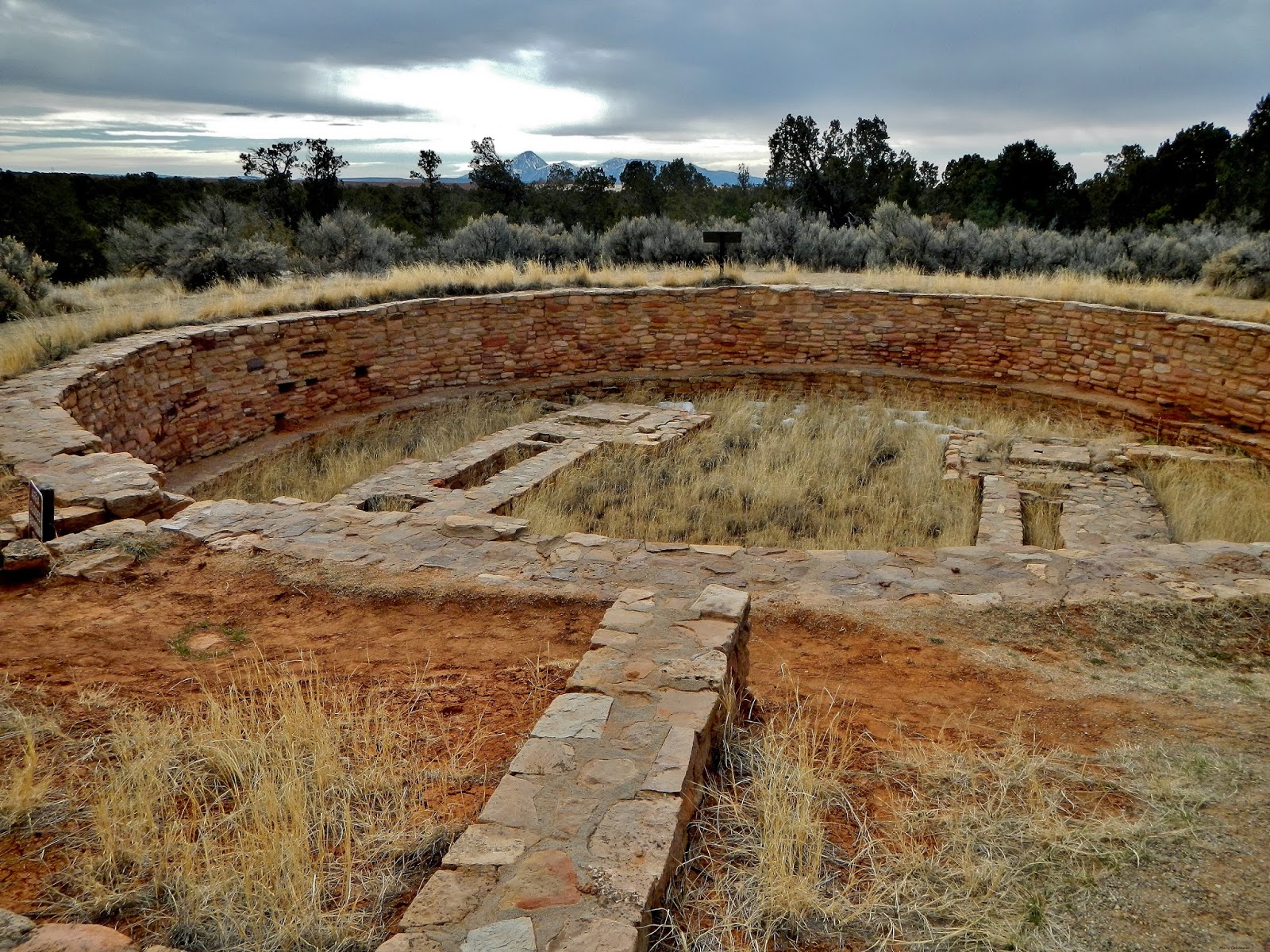 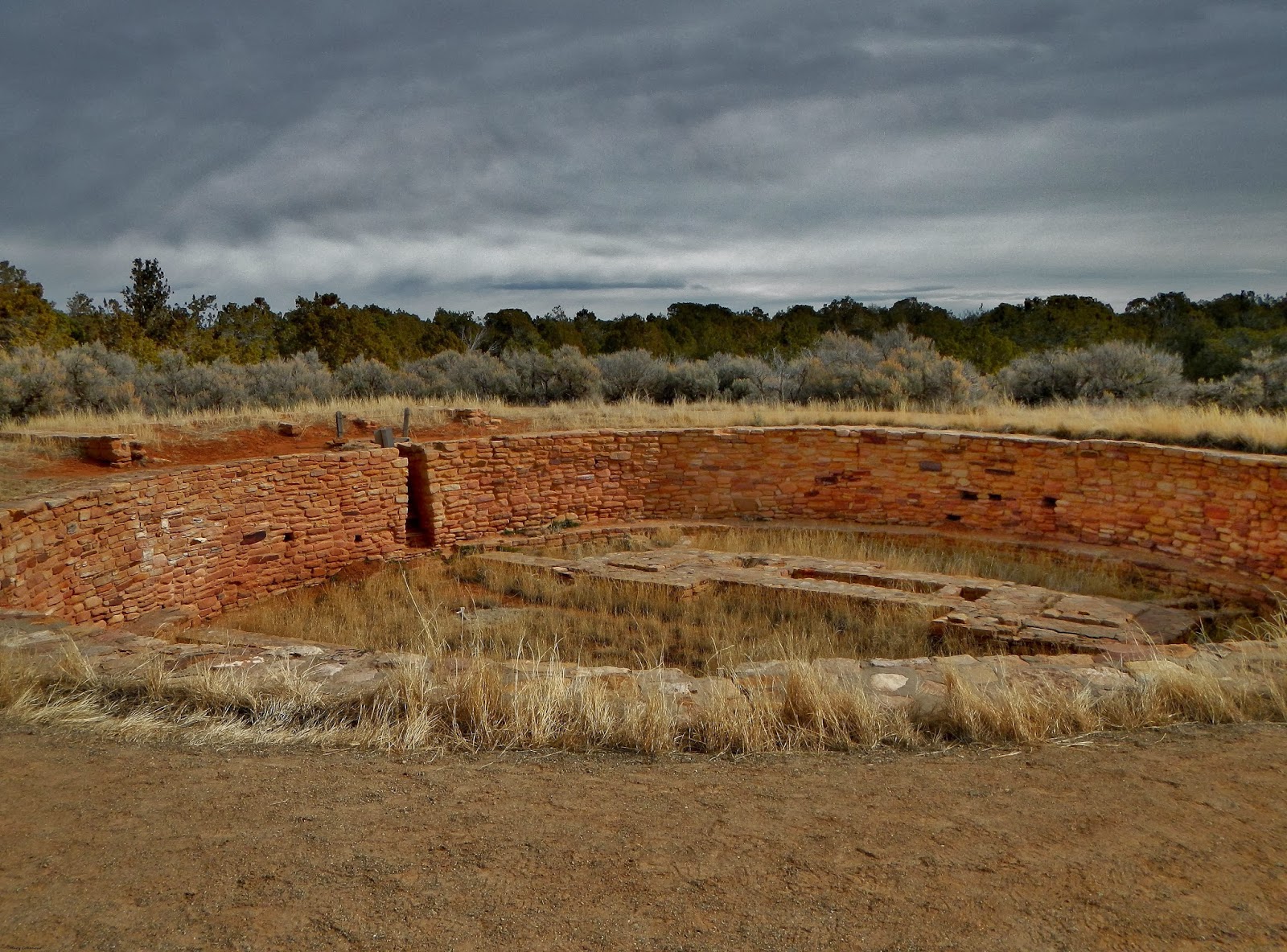 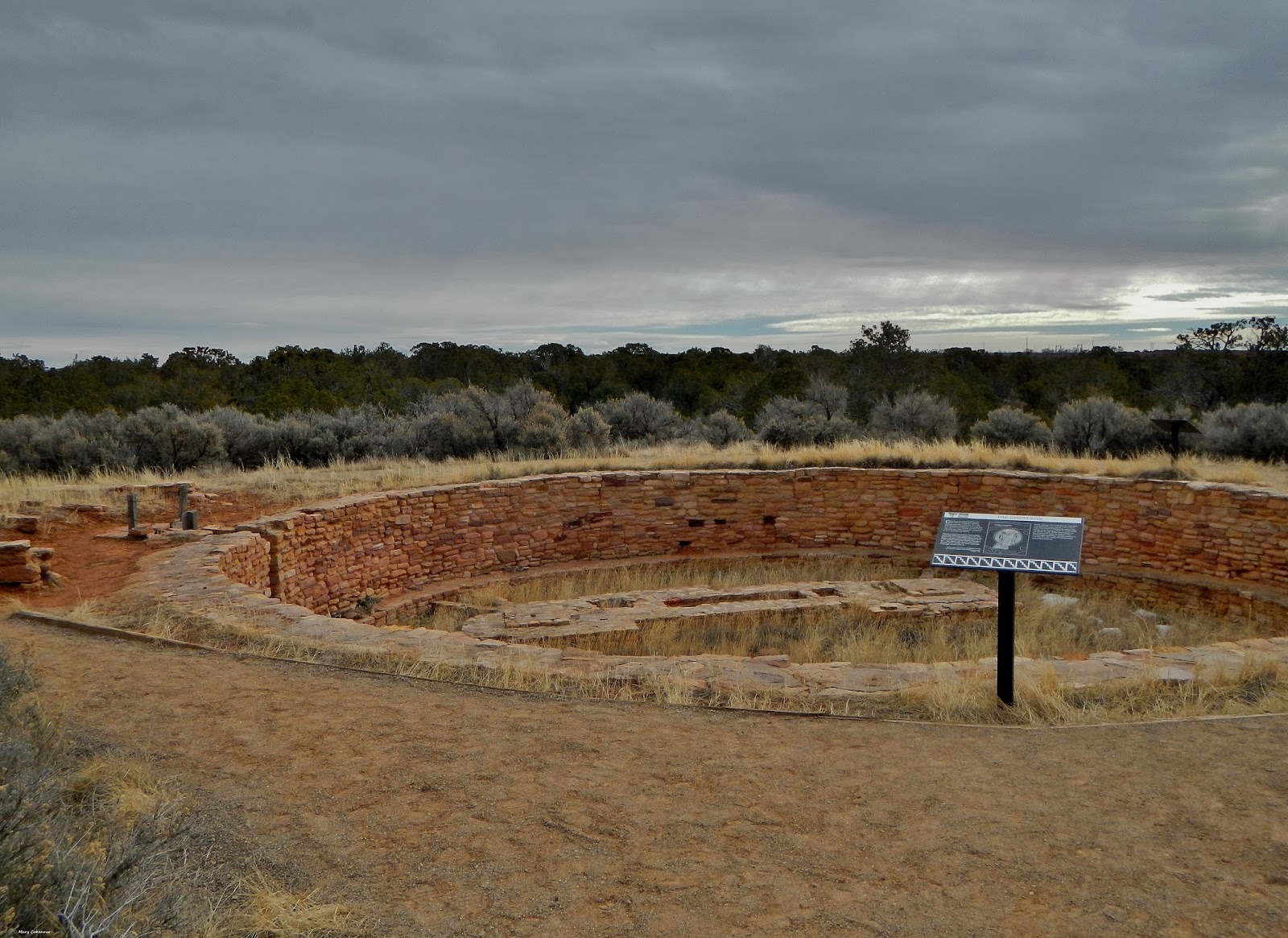 ﻿
Back track up the walkway to the ruins, Lowry Pueblo, named after Colorado homesteader George Lowry.  There are 40 rooms, 8 Kivas and it is estimated that about 100 people lived in this village.  The building style represents both Chaco Canyon and Mesa Verde cultures; four mountain ranges can be seen from the pueblo: Sleeping Ute, La Plata, La Sal and the Abajos.

You will be blown away by, not just the size of these ruins, but how well preserved they are.  I don't know about you, but after going inside, walking throughout and all around them; Roy and I both felt as if our souls had been touched.  An amazing feeling and I'm so happy we didn't miss out on it by putting off the visit again.  Here is the first section before you get to the entrance of the lower Kivas and rooms.


Walk along the left side of the pueblo towards the rear, a step down leads to a small doorway...duck!  Wind your way through to the "painted kiva" area; there used to be intricate, geometric designs on the walls, but the paint peeled away after exposure to the air.  However, a specimen was preserved and is on display at the Anasazi Heritage Center.  Strange, standing inside, it felt as if the air around you was actually "hugging" you; it felt relaxing and soothing.

The outside rear of the ruins affords you a "look down into" view of the Kiva area you just came from.


Of course there are all those rooms!

Lowry Ruins is definitely an amazing place to visit; so if you have Hovenweep on your list of sites, these ruins are only about a half hour away; do NOT pass this up!