The legend of Dead Horse Point originates in the 1800s when cowboys would round up the wild mustangs that roamed around the mesa.  They would corral them down at "The Neck", pick out the best of the herd and let the others go free.  However, for whatever reason, one day the mustangs not chosen were left in the corral and forgotten about.  They died of thirst with the Colorado River in full sight, 2000 feet below them.  We don't truly know how the cowboys felt about what they had done; we can only hope their humanity kicked in with feelings of regret and remorse. It is said that at night, campers can hear the mournful cries of the horses being carried on the wind through the canyons.  From the viewpoint, looking below, the form of a white horse can be seen; a ghost to remind us of the wild horses who tragically passed away.


﻿﻿﻿
From Moab, along Route 191, the entrance to Dead Horse Point State Park, and Canyonlands - Island in the Sky, is about 10 miles to Route 313; another 18 miles to the State Park itself.  After parking and checking in at the Visitor's Center, the Overlook is along a paved, upward incline, walkway.  The walled viewing center is shaded for the most part, but you want to get close enough to the wall to be able to see as far as the eye can see.  Straight ahead is the most photographed site of the park, "The Gooseneck" aka "The Neck". As with the Grand Canyon, the ever moving Colorado River carved out this formation; in fact, Dead Horse Point is also known as Utah's "Little Grand Canyon".  It was here that the actual Grand Canyon scene from the movie, "Thelma and Louise", was filmed. 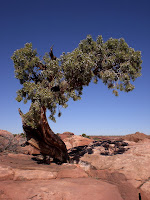 The Overlook is surrounded by sandstone; juniper trees, shaped by the wind, grow strong between the stones. 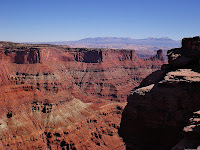 To the East is Cane Creek Anticline and the Solar Potash Collection Ponds. 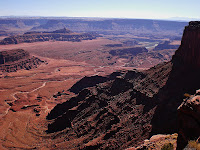 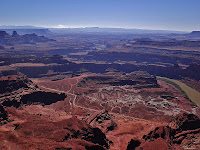 Down below is Shafer Basin and Shafer Trail (originally used to bring cattle down to the water), while looking southward is Pyramid Butte and Pyramid Canyon; further on, Islands in the Sky can be spied.


Westward is a desert tower known as "Big Chief" keeping a watchful eye over his canyon.
Looking to the North, Merrimac and Monitor Buttes can be seen; they can be reached via trails from Mill Canyon Road.
Besides the Overlooks, there are many trails that can be hiked, and while camping sites are available, better make reservations or you'll be out of luck staying overnight at the park.  Invest in ATV or 4 wheel drive maps for traveling over the Basin; it doesn't hurt to carry a map of the hiking trails either.  Want more?  You can always get back on Route 313 and see what surprises Islands in the Sky has in store.  Enjoy it all !!!

Posted by Mary Cokenour at 7:40 PM