All Roads Lead to Montezuma Canyon - Rock Art and Carvings at the Corral.

This is the beginning of a series of write ups on the roads and trails between Monticello and Blanding on the eastern side of Route 191. Why "All Roads Lead to Montezuma Canyon"? Simple reason, it seems to be where we continually end up. In two months, we have been to Montezuma Canyon four times and only the first time was planned; the rest simply just happened.  As much as I would like to do the write ups in the order they occurred, it isn't feasible; our trips were convoluted adventures involving anything from "how did we get here?" to "if we live, I'm going to so hurt you!". 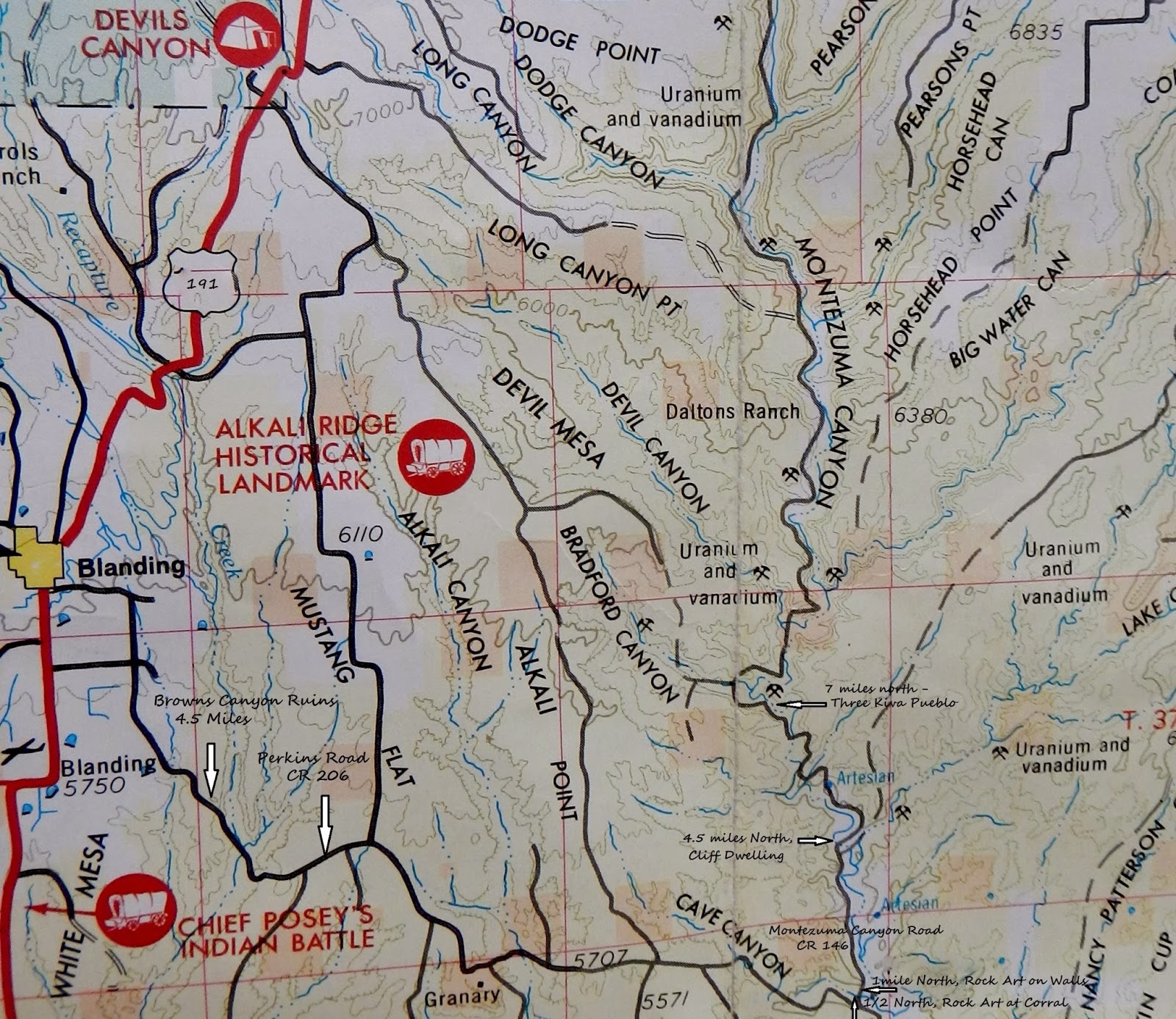 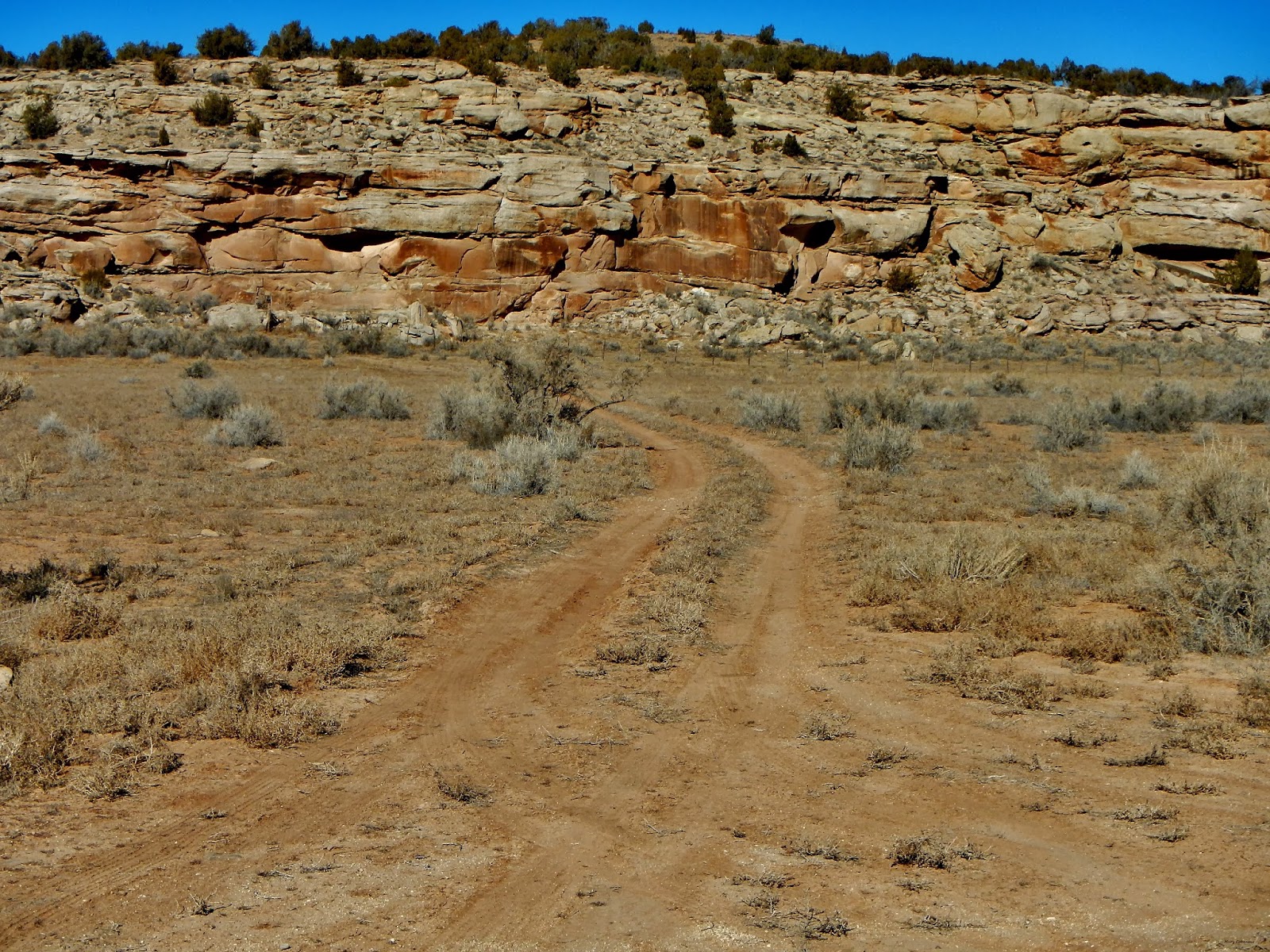 Since I've already written about Browns Canyon Ruins and Perkins Road - CR 206; I'm going to make that left turn option onto Montezuma Canyon Road - CR 146.  Only a half mile going north (the first arrow, pointing upwards, on the map), on the left hand side, will be a dirt trail with a corral at the end of it; watch out for those cow patties!  It is the rock walls to the left, and even behind the corral, that are to be your main lines of focus though.  Lets go left...

There are substantial layers of ledges going all the way up to the mesa (almost like a natural stairway); hand and foot holds aplenty.  However, there is also sand and gravel, so slippage is very possible as my ripped jeans and layer of skin missing from my left knee can attest to. 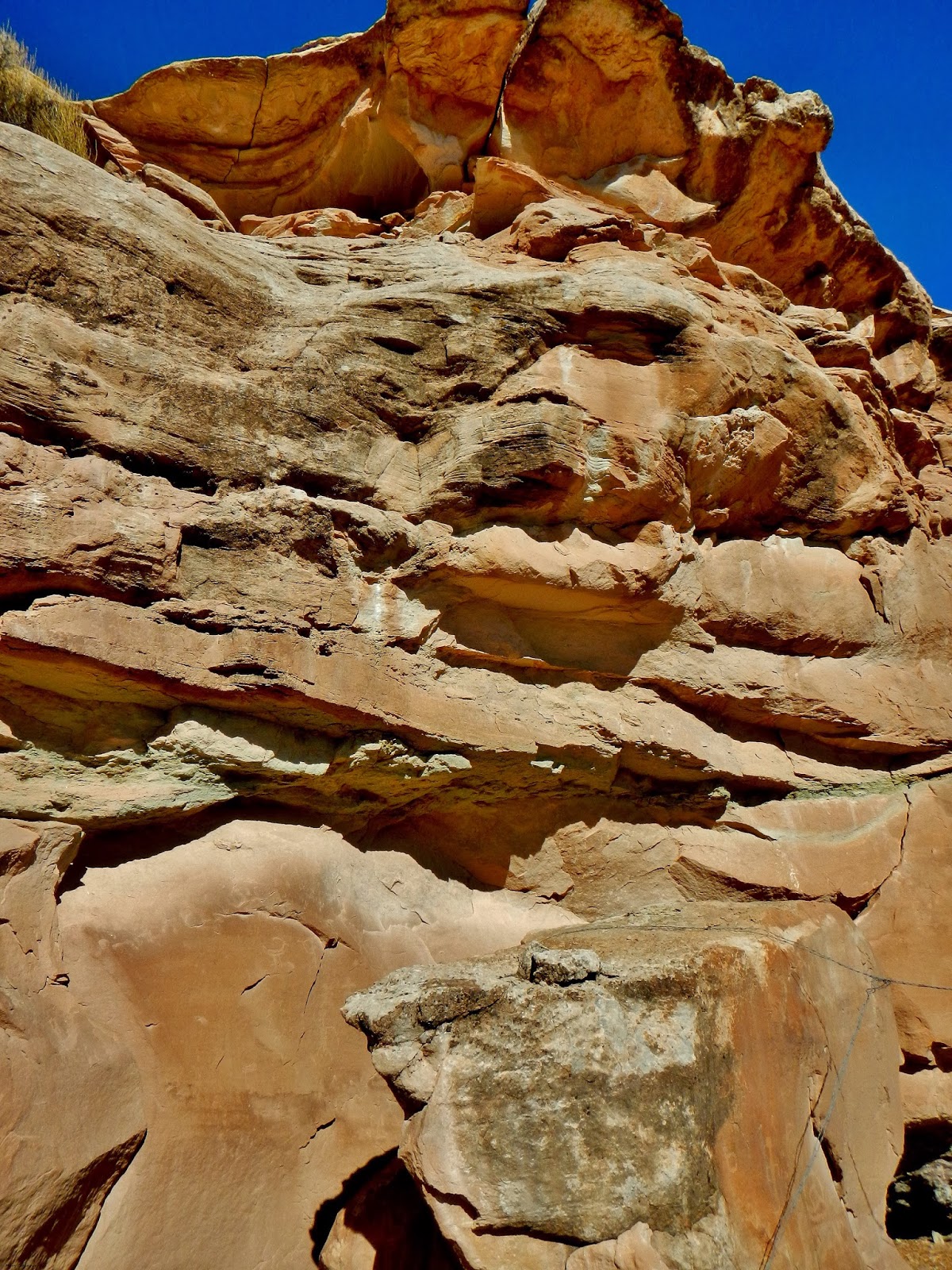 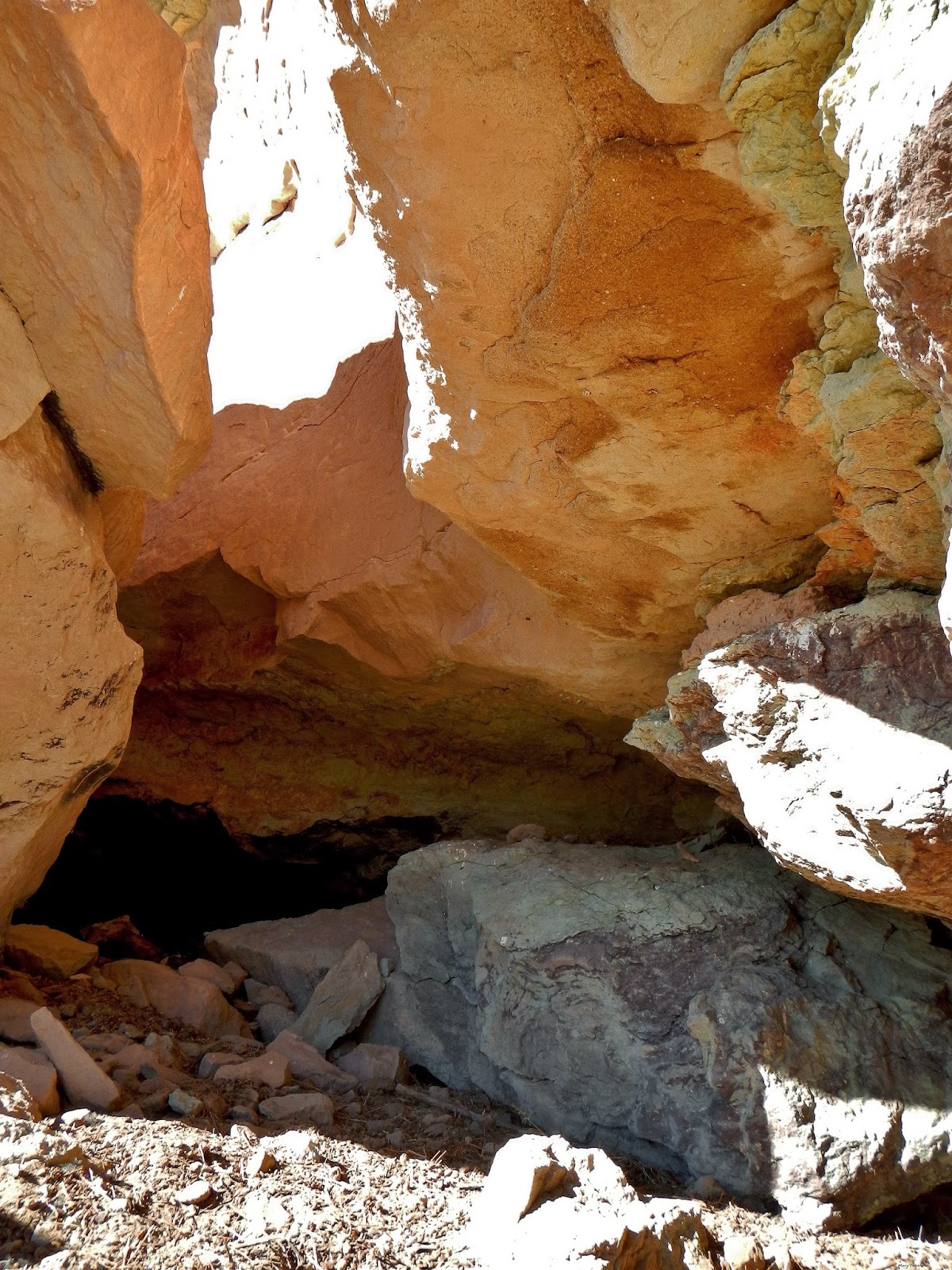 There were some smallish caves with signs of packrat nesting; many boulders were cracked in half and you could make your way either between both sections, or around them.  This is where fantasy takes hold and you wonder if, going behind one of these huge boulders won't lead you to an opening, hidden from road view, to "a land lost in time" beyond. 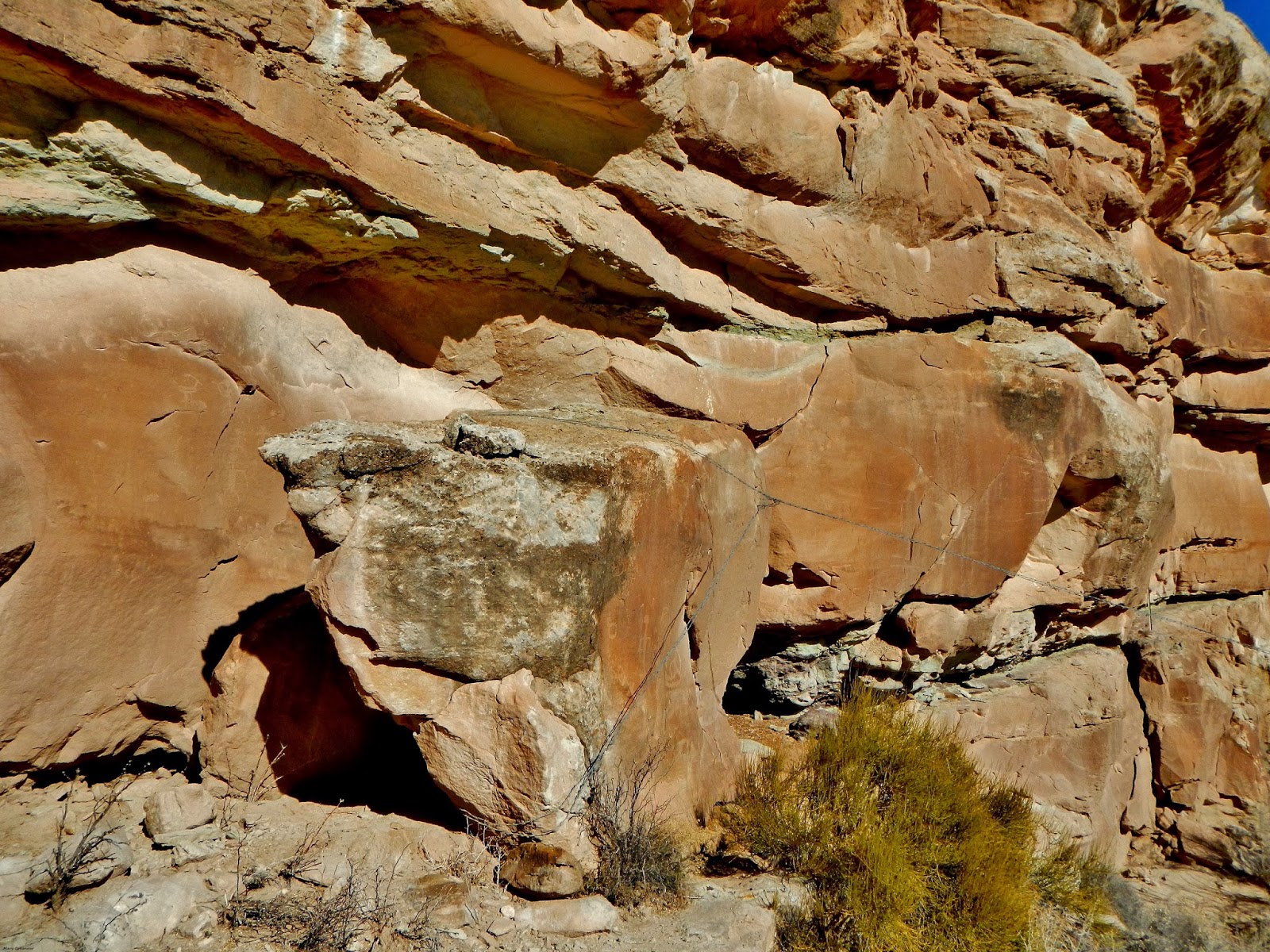 It would also have been helpful if I had remembered to wear my hiking/climbing boots instead of sneakers which have poor traction on sand and gravel.  Lesson learned! 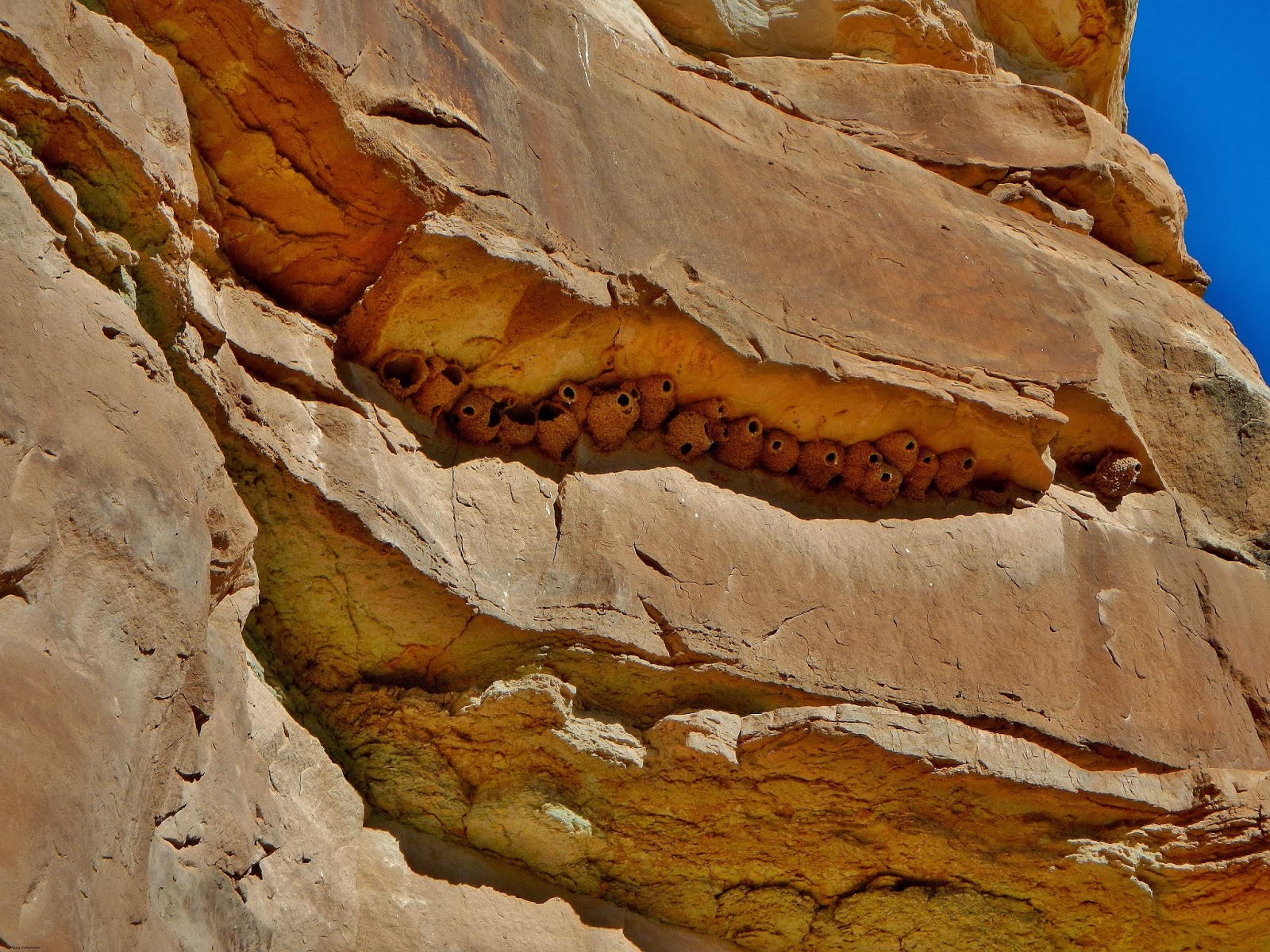 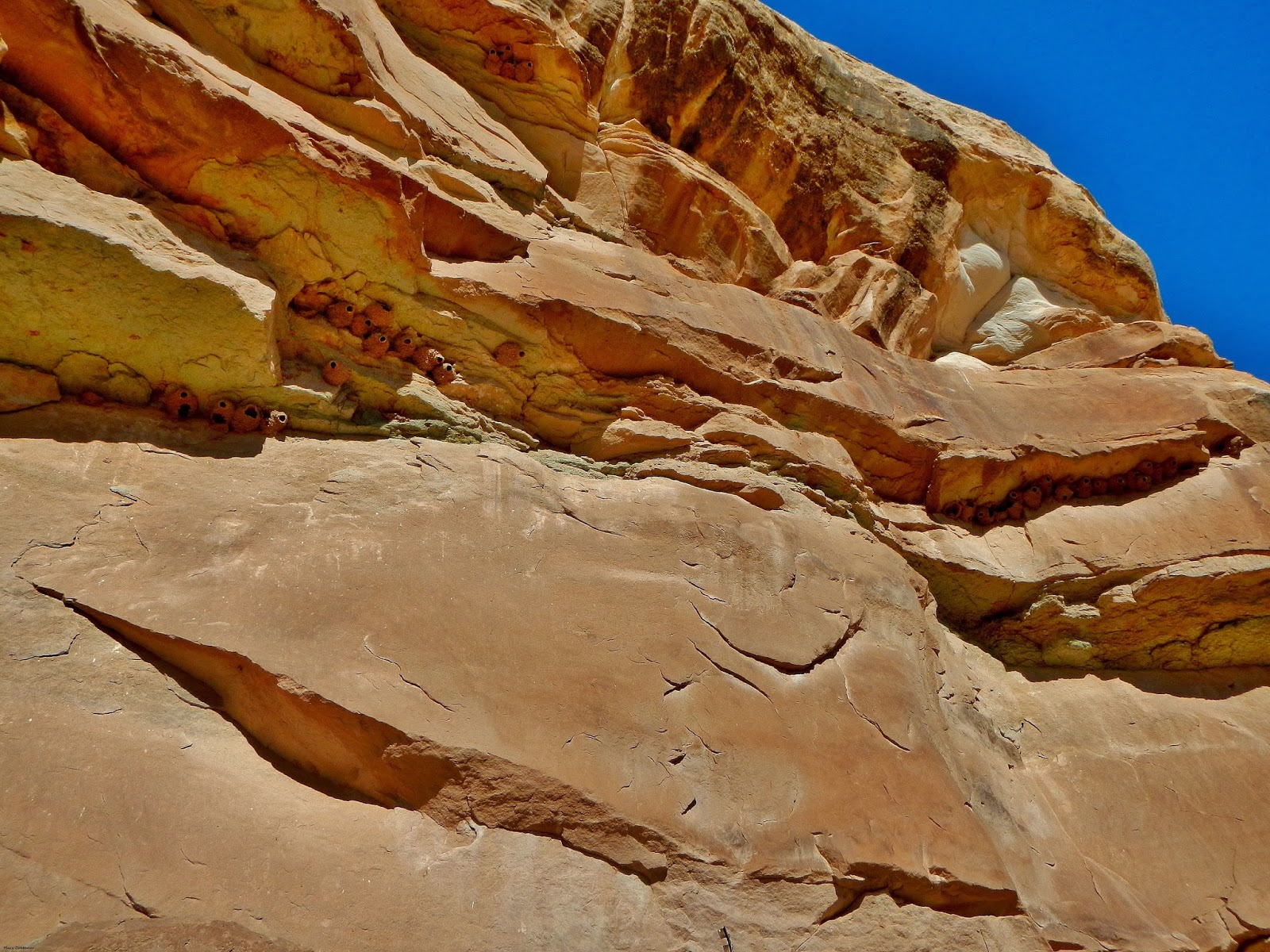 Then there were the "mud nests" tucked into the shadier underneath of many of the ledges.  They very much resembled the mud nests made by wasps in the eaves of roofing, but these were much larger.  These beautifully built structures belonged to "Mud Swallows", or more precisely, "Cliff Swallows. These small birds nest in colonies, with nests often touching each other. Each individual nest looks like a gourd, with a small hole serving as the entrance; the mud plastering the nest from behind and above.   Being January when we were there, the nests were empty; but I bet it's a pretty busy community during the warmer months from the amount of nests we spotted above us. 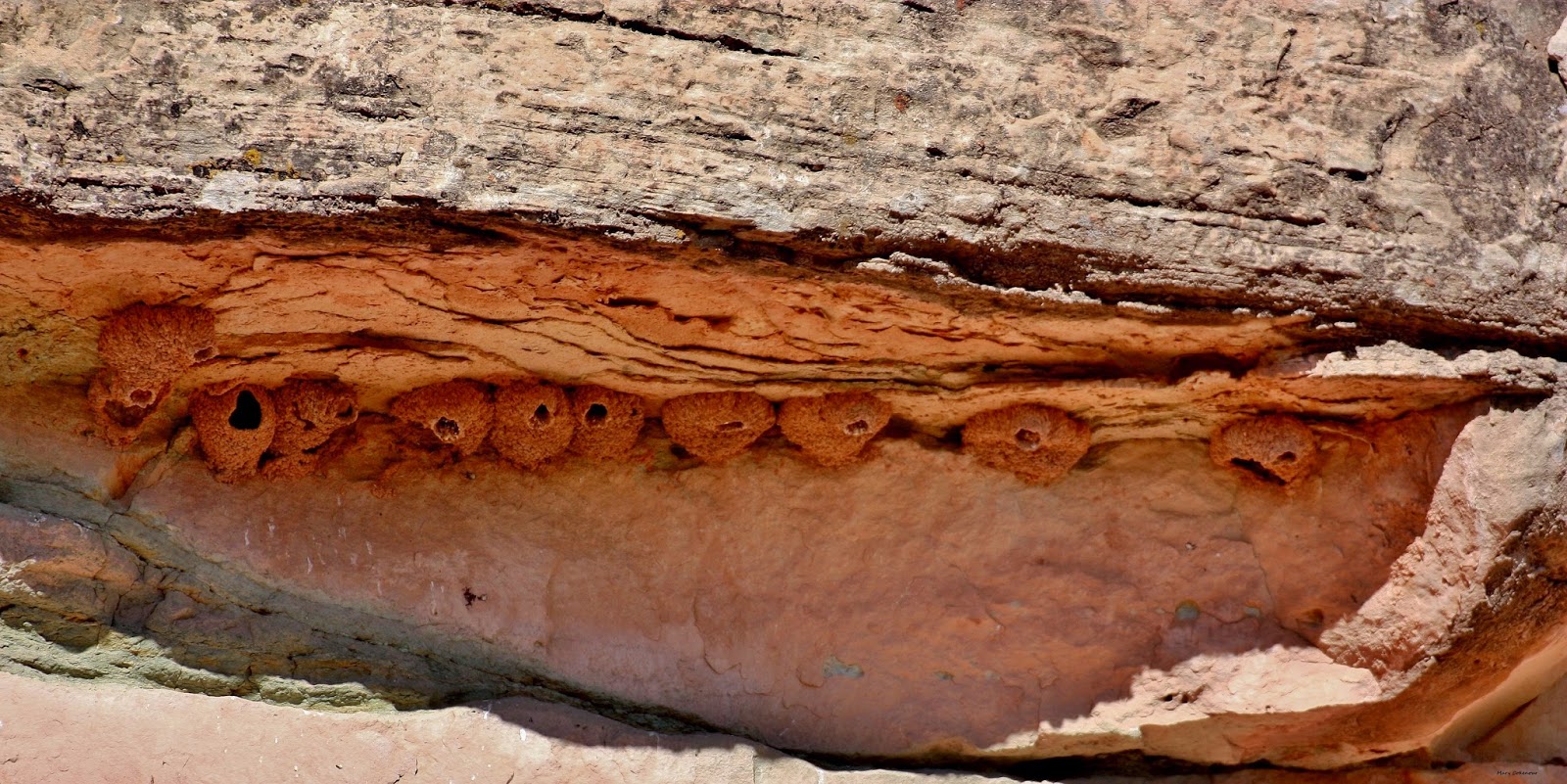 While the rock art is just noticeable from the dirt trail, up close and personal is more amazing.  We found, not just figures and symbols scratched onto the rock face, but carvings; a first time find for both of us!  The rock art and carvings in Montezuma Canyon  have been dated back from 100 B.C. to 1150 A.D. These eras of time include the Anasazi whom are believed by archaeologists to have developed from the “Archaic” culture; groups of nomadic hunter-gatherers.  Also the Puebloan Dwellers who gradually moved from large communities to smaller settlements, such as Three Kiva Pueblo which I'll write about in this series.


Getting back down to level ground, we made our way over to the corral to check out the walls behind it.  Sure enough, there was more artwork to be found there; the zoom lens ensured we'd get photos without having to trespass.  Even though no signs were posted about "private property" and "no trespassing", we weren't going beyond the boundary of the fencing. 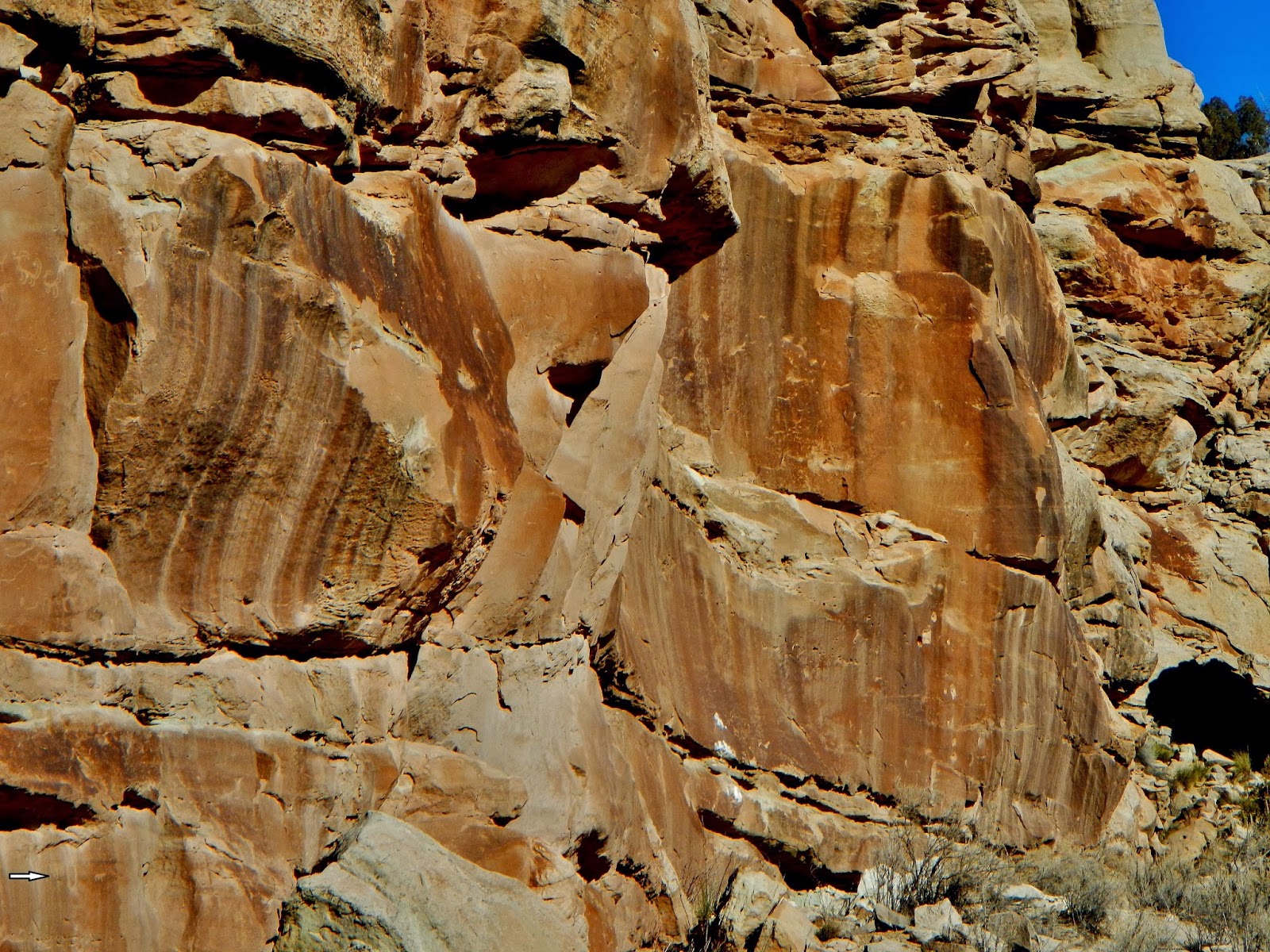 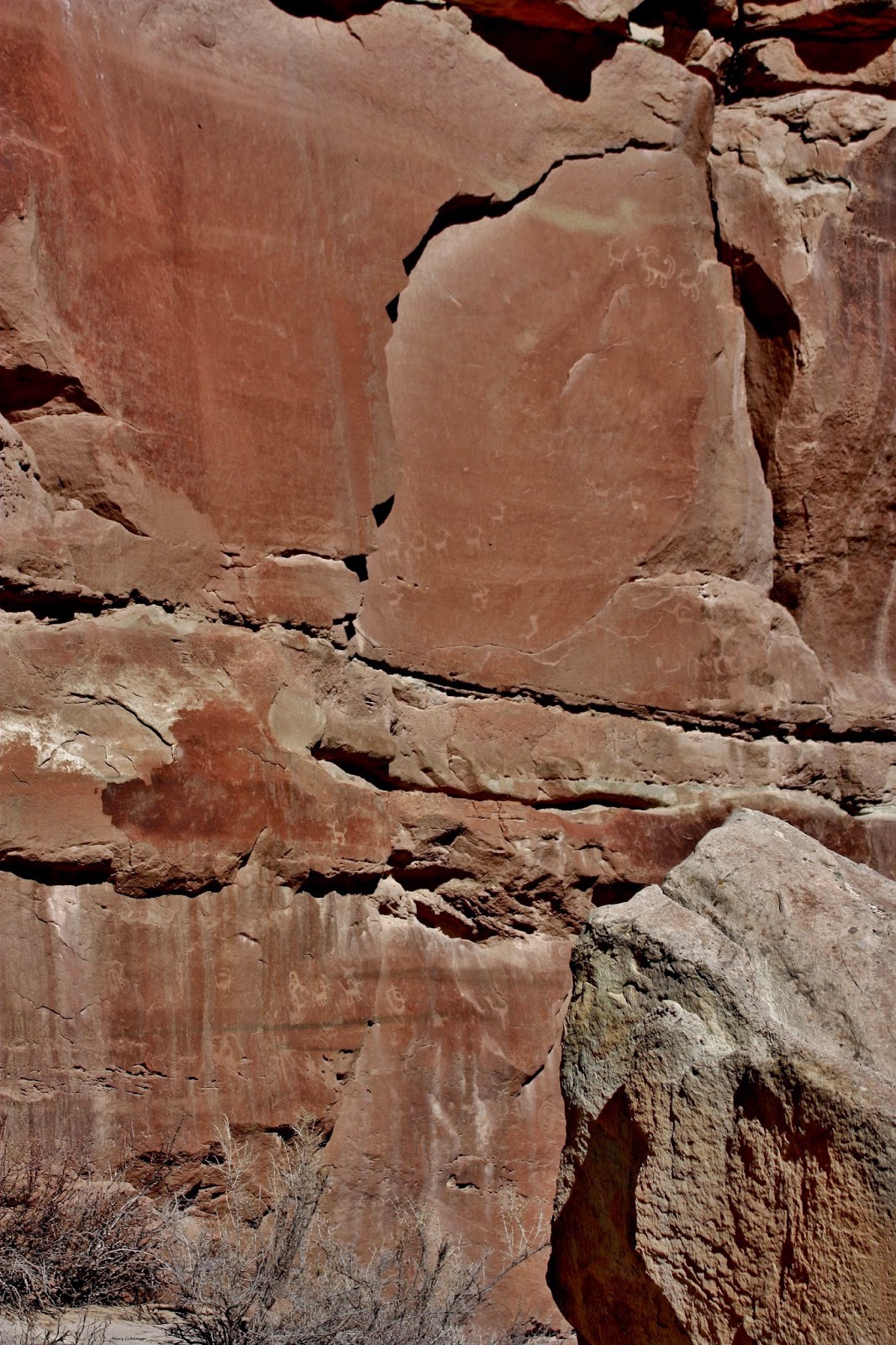 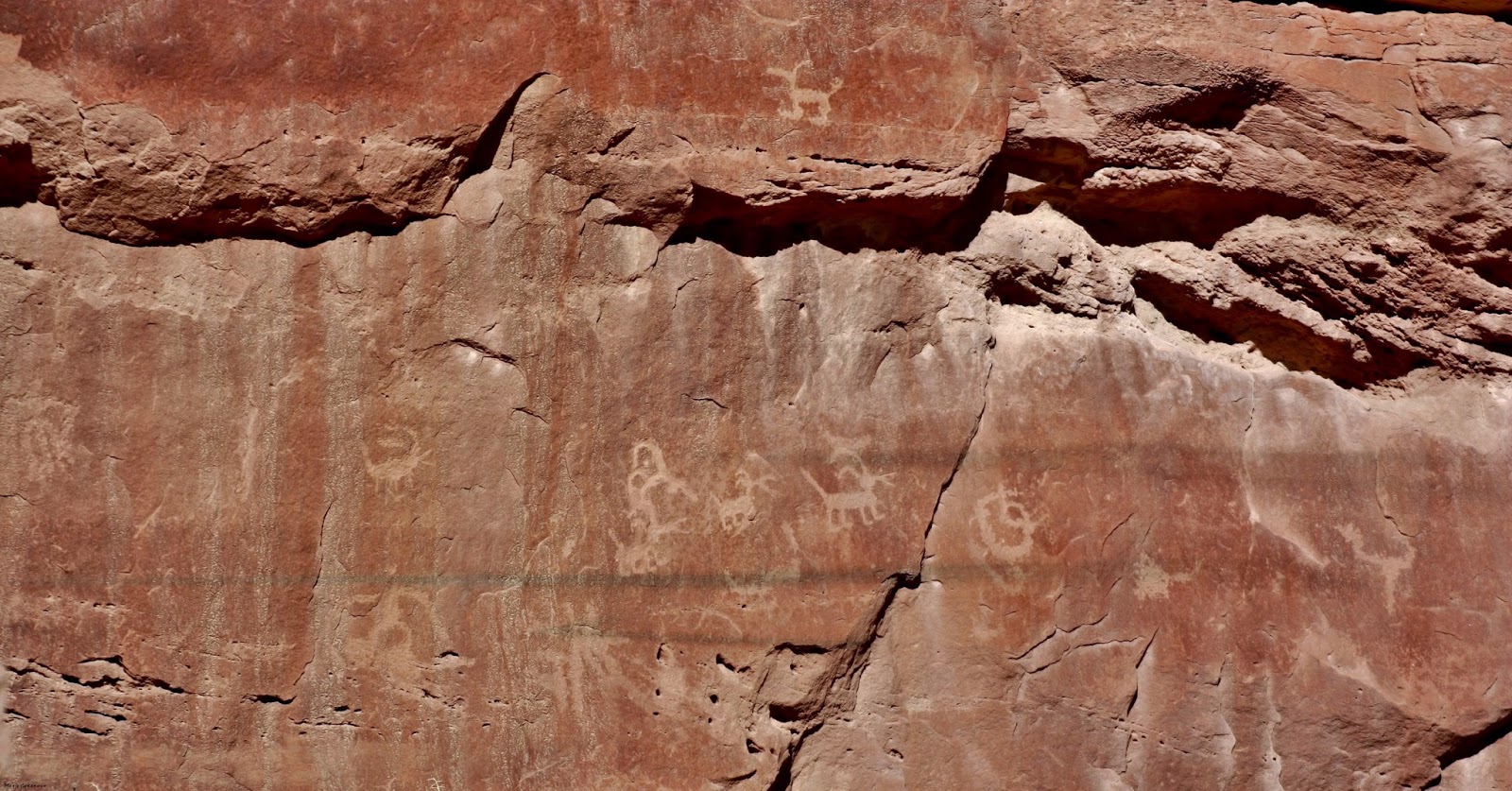 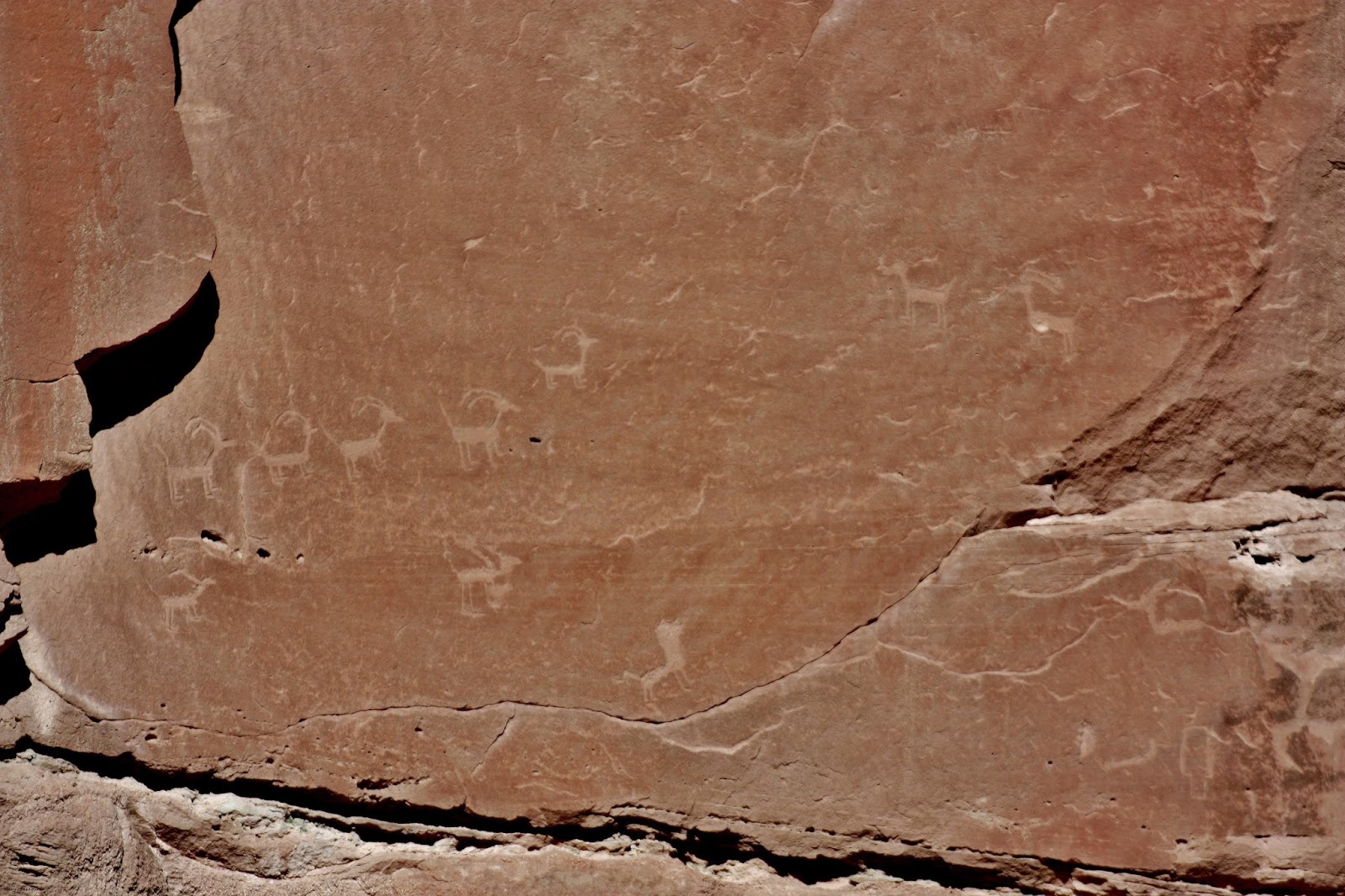 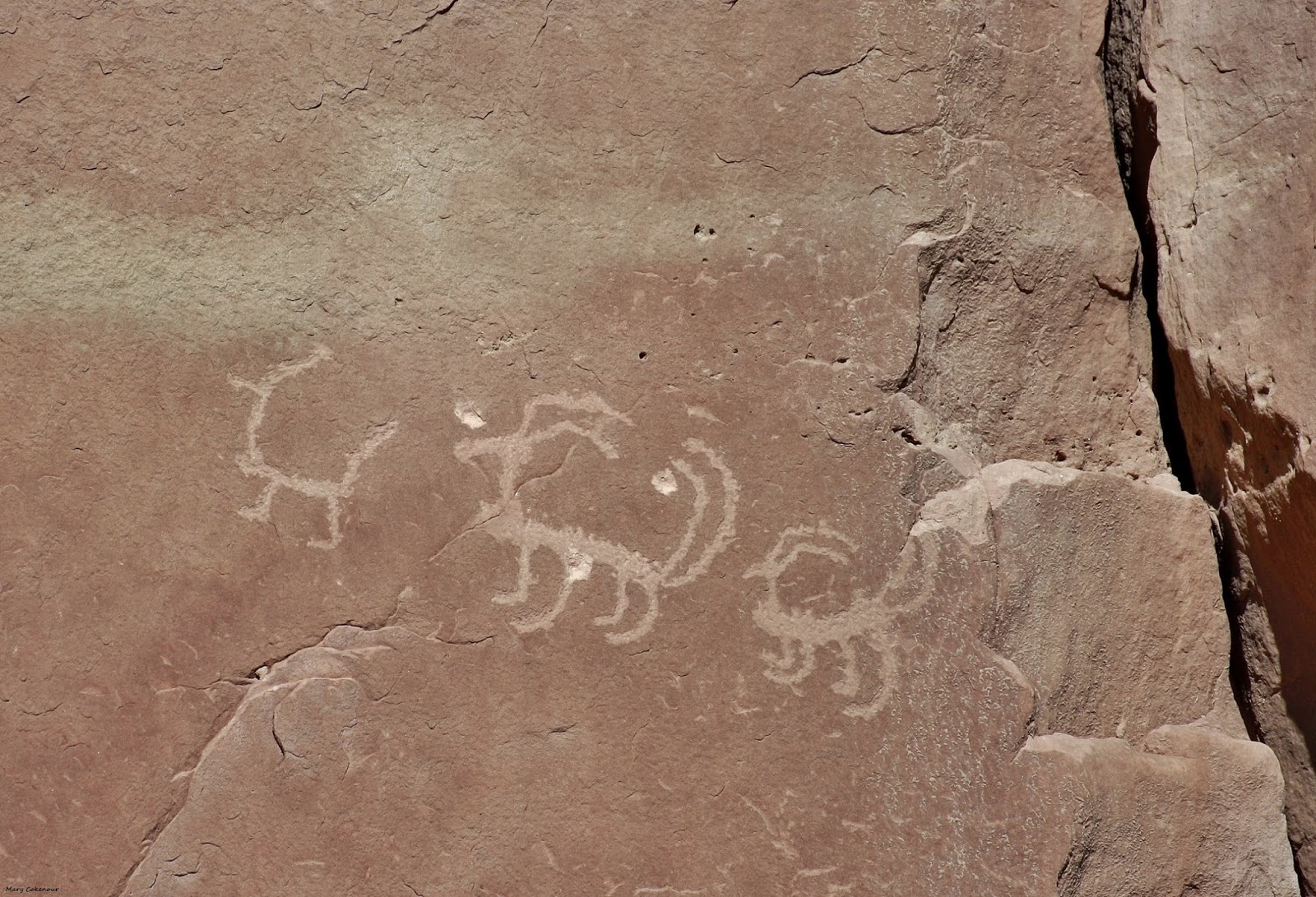 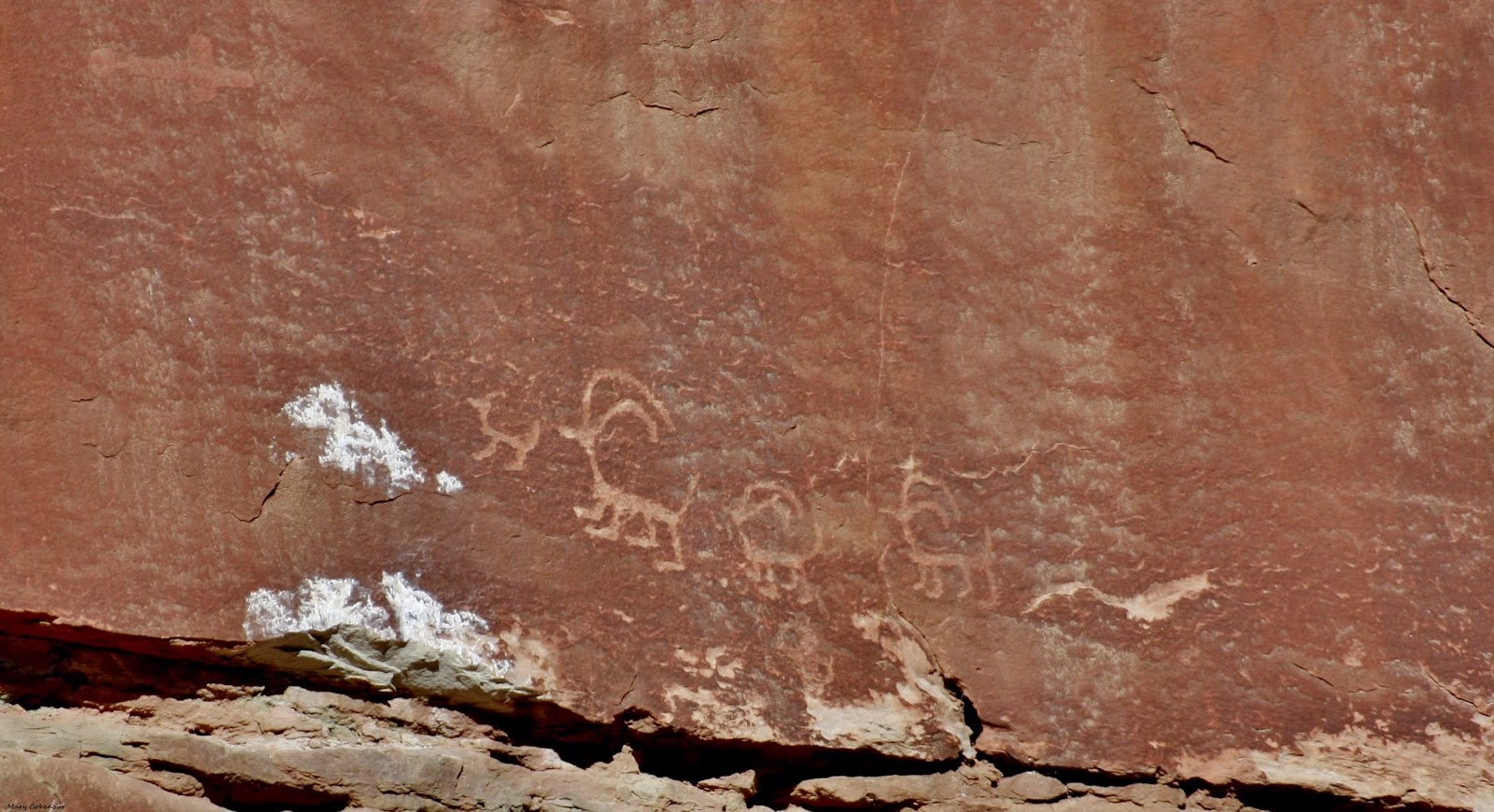 Going back to the map above, the next section of artwork will be about another half mile up the road; and that will be my next write up about breath taking, Montezuma Canyon.