Yes, We Did Make it to Hovenweep!

I'd written about Route 262 and how we'd somehow missed the turnoff for Hovenweep National Monument; well the second time was the charm, but we used the Colorado route instead.  Whether you are traveling north on Route 491 from Cortez, Colorado, or south from Monticello, Utah; the turnoff for Hovenweep is located nearby the little town of Pleasant View.  There is a rather large sign indicating which road (CR BB) to take, so even blinking, you cannot miss it.  This short road ends at the junction of Route 10 which you would follow southward to Hovenweep (the site shares the Utah/Colorado border); the entrance is on this road, and the Visitors Center is only a little ways back.  Easy peasy! 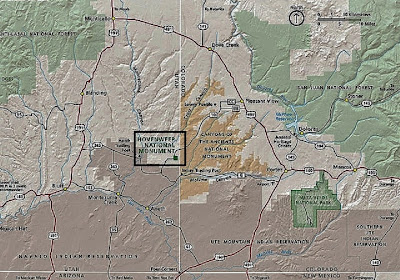 Roy and I went in July, and as much fun as we had there, we also suffered from the heat; we did bring bottled water with us, but it didn't seem to do much good.  First off, the dry heat warmed up our cold water quickly, so it didn't quench our thirst after awhile.  Hint: partially freeze bottles of water and carry in an insulted bag; as the ice melts, the water will stay cool.  At Hovenweep, there are very, very few places to rest in shade; I'm recommending cotton fabrics in light colors, and a white hat to keep out the sun; don't forget the sunscreen!  The entire loop walk (Rim Trail, Tower Point, Visitors Center to Stronghold House) is a little over two miles, but can be grueling if you're not properly prepared and you're out in the summer heat.  Let me tell you that as soon as we got back to the Visitors Center, I put my head inside one of the sinks in the Ladies restroom and ran cold water over it.  After getting home, I'd found I'd lost eight pounds, while Roy had lost 12...now why do men do that, it's so annoying.   Of course most of it was water lost from dehydration, so I essentially lost three pounds from the hike, Roy lost eight...now that is truly, truly annoying! 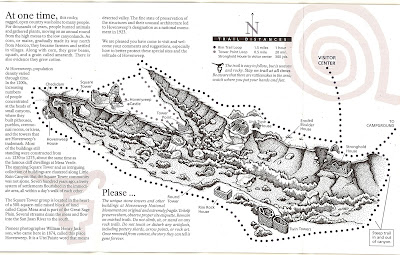 Hovenweep, meaning "deserted valley" in Ute/Paiute is a series of various ruins dating back to the 1200s A.D. with a small canyon lying down its middle; Little Ruin Canyon.  A steep trail can be followed down into and out of the canyon as part of the Rim Trail; or you can follow the trail till you get to this part, and then return the same way back to the Visitors Center.


﻿ Leaving the Visitors Center, you can either start with the steep trail that goes into Little Ruin Canyon, or walk the slickrock trail to Stronghold House.  Besides this ruin, it is a good vantage point to look over the canyon and see Round Tower, Rim Rock House, Eroded Boulder House and the Twin Towers.  Consider this encouragement to keep hiking to get up close and personal with these ruins. 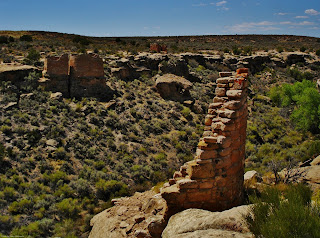 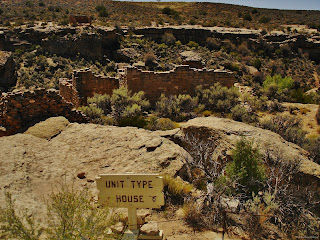 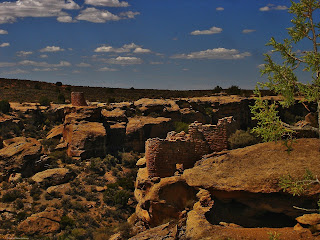 The next ruin will be "Unit Type House" which contains a Kiva; across the canyon is a better view of Round Tower than there was at Stronghold House. 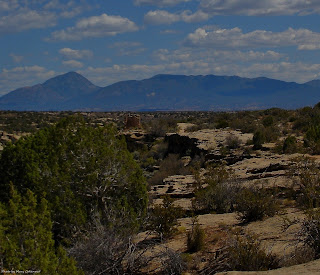 When you reach the tip of this part of the canyon, the trail will split to either the Tower Point trail, or you can stay on the Rim Trail.  Big hint here, you want to do the Tower Point trail; not just a stunning view, but a stunning view of Sleeping Ute Mountain as well.  There are two different legends about this mountain; the first and more spoken one is the sleeping form of the mountain is the first Ute chief, killed in a great battle, but who will awaken one day to lead his people (The Ute) once again.  The other, less mentioned, legend is that this is the sleeping form of a “Great Warrior God” who fell asleep while recovering from wounds received in a great battle with “the Evil Ones”.  Similar legends, but still wonderful stories to hear.  By the way, there is a ruin at the end of Tower Point; a semi-circular section of a tower. 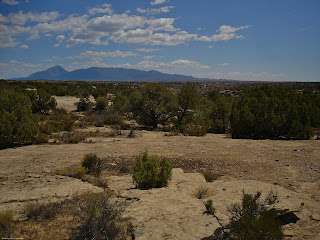 ﻿
﻿Following the loop around Tower Point will bring you directly past Hovenweep Castle, as would the Rim Trail if you had stayed on it all along.  This is the largest of the preserved structures;  in the canyon below can be seen Square Tower; while across the other tip of the canyon is Hovenweep House.


﻿﻿
Between Hovenweep House and Round Tower, there are excellent views of the canyon, but one thing you should take the time to do is listen.  As you stand at the edge of one of those canyon views, listen to the wind and listen for the voices.  They could be voices of other visitors to Hovenweep being carried along on the wind; or perhaps they could be voices of those ancient ones that have long passed on.  Who really knows, aye?
Passing Round Tower, Rim Rock House and the Twin Towers, your journey is almost over; just past a little area shaded by one of the few trees at Hovenweep, the steep trail down into the canyon begins.  You're almost back to the Visitors Center and on your way to the next adventure, or back to your abode....or you could always turn around and do the Rim Trail all over again; it's only about a mile. 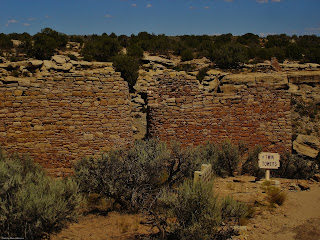 Whatever route you choose, make sure to enjoy the walk.
Mary Cokenour
Posted by Mary Cokenour at 1:42 PM