Edge of the Cedars Should Not be a Hidden State Park.

Hidden away, at one of the edges of the city of Blanding, is a most wonderful museum full of ancestral Native American history.  The Edge of the Cedars State Park is not only a museum, but the site of Pueblo ruins that was part of the Four Corners communities settled during 750 to 1300 A.D.  When I say hidden away, I mean that this place of wonder is not easily found on the side of the major roadway, Route 191. 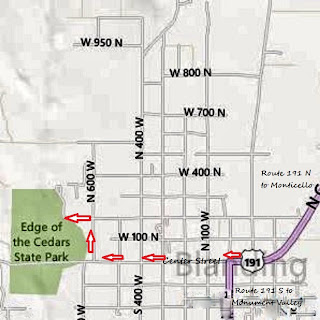 Whether traveling south towards Monument Valley, or north towards Monticello; there is one blinking traffic light that will be the focal point towards finding your way to the Park.  Currently there is a Chevron gas station on one corner of Center Street.  Drive west past the Chevron (straight on if coming from Monticello, or make a left if coming from the south) and continue down to North 600 West; make a right and then a left into the Edge of the Cedars parking lot.  There are other ways of getting to the Park, but this is the easiest way if you're new to the area and do not want to travel the back streets too much.  Also, there will be signs pointing out the way.

There is an auditorium inside where you can watch a short video about the Museum; I highly recommend it as it gives so much information and keeps your attention at the same time.  If you're truly lucky, you'll get to meet, or even go on a tour with, the museum curator, Teri L. Paul.  She is very dedicated to the preservation of the artifacts, and her enthusiasm proves that as she talks about the pottery, weaving, ruins and many other items.  Her voice is pleasant to listen to; she makes sure to answer your questions in a manner that only makes you want to know more.

Now whether you have children with you or not, make sure to visit The Learning Center for a real education in what life was like for the ancient Native American cultures.  Pay attention to the wall of artifacts; basically layers of earth and the "garbage" left behind throughout the centuries.  For our current time, the claim to fame looks like it will be plastic soda bottles and cellphones...how embarrassing!
﻿ 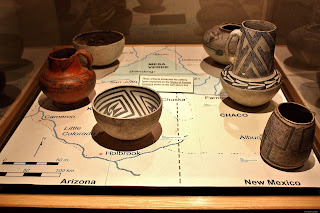 The Museum has over 400 pieces of pottery representing the Four Corners area.  Many of the examples of red pottery are of a red clay whose source has not been identified; mineral tests have been done, but no match as yet.   The uses of the pottery are everyday to ceremonial; miniature pottery could have been "toys" for children; or of a personal to ceremonial use in themselves. 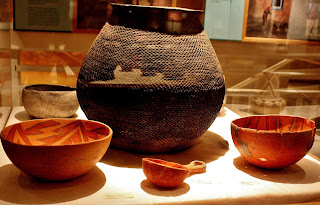 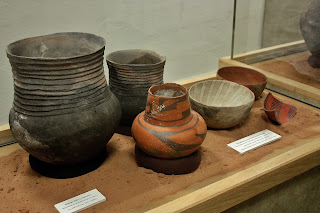 The "Visible Storage" is a glass enclosed room; a computer on the outside of the room allows visitors to look up any pieces of pottery to find its origin and history. 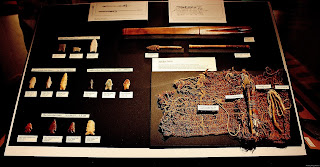 Various tools are exhibited, including an extensive collection of arrow heads. 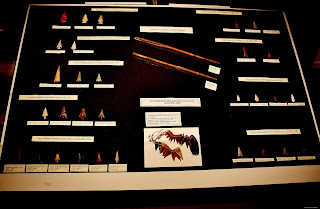 Most impressive is the Macaw Feather Sash, found, in 1955, in a cave located in Lavender Canyon (Canyonlands National Park - The Needles District). The feathers come from a bird indigenous to Mexico, indicating trade with other cultures of that area within the Four Corners area.  It is perfectly preserved, the feathers retaining their bright colors.

On the interior walls of the Museum are framed photos, displays and copies of petroglyphs; all the artifacts are encased in glass.  You will be fascinated, you will want to touch; but that is what The Learning Center is for.  But wait....there's more outside! 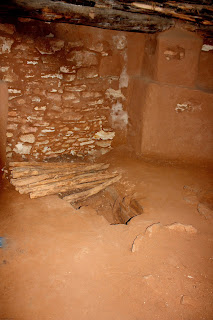 The exterior of the building is surrounded by sculptures, but it is the ruins in the rear that draws the most attention.  This site is only one of several upon the grounds; maintenance is approximately $20,000 (U.S.) per year, so this has impeded work on the other mounds.  Where are all those rich philanthropists when they're truly needed!?!  Remains of wooden beams show that this home (possibly two families shared it) had experienced fire damage.   One of the excavated Kivas can be climbed down into; while another also proved fire damage when the fallen in "roofing" was found preserved at its bottom.  It's a wondrous place which makes you appreciate all the conveniences of modern living.  By the way, it is not unusual to find food offerings in the Kiva left by Native Americans to honor their ancestors.


A little way, down a river rock lined walkway, is the "Sun Marker", created by Bluff artist, Joe Pachak. This sculpture represents the movements of light and shadows during the solstices and equinoxes; a way to measure time and seasons by the primitive peoples who had lived in the area.


Personally, I was at Edge of the Cedars for a little over an hour, took almost 80 photos, and still think I should have spent more time there.  If you rush through, then your heart truly wasn't into the visit in the first place.  Before you leave, make a generous donation; if they get enough, perhaps another excavation can take place and be maintained.  Don't miss out on this place!!!