Continuing Down Route 191 Through Arizona. 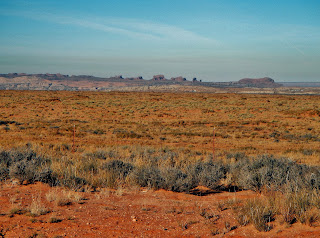 Back to getting to Canyon de Chelly; now according to the MapQuest directions, it should have only taken 2 and 1/2 hours to get there. Sure it does, if you drive straight through, no stopping; but MapQuest has never driven with Roy and myself. We love to stop and admire the scenery; we love taking photos of where we are and what we are seeing.  This post is the continuation of our trek to Canyon de Chelly via Route 191 after crossing the Utah-Arizona border and finally getting to Chinle, Arizona which is where the Canyon is located. As I hinted before, this roadway is going to bring you past miles and miles of formations which will make you think of a miniaturized version of Monument Valley. It was very difficult not to keep stopping every couple of miles to take photos, but if we did that we would never have made it to our designated destination.  With all the stopping we did do, time allowed us to only be able to complete the North Rim of the Canyon, so need to go back to the South Rim. Oh, you do not see me complaining about that at all, and am chomping at the bit to get back there again. By the way, there will be a certain point, that if you look off into the distance, you can spy the actual Monument Valley. 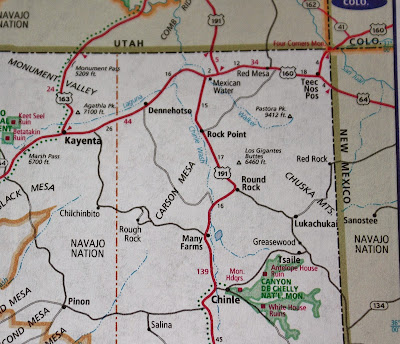 After crossing the border, Route 160 is only about 5 miles away; but within 2 miles you'll come up to an interesting formation which I have seen referred to as "keyhole" arches.  Remember, I already warned you that signs along this route are slim to none, so this name is only what someone else thought it looked like.  It is located in a fenced off area, so while you can park on the shoulder for photos there will be no going up for a close and personal experience.


You know you're almost to Route 160 when you see some black mountains with "stone fortresses" around them; well it certainly looks like someone actually built these walls, but it was by natural elements alone.

Big hint you have reached the junction of Route 160, almost directly in front of you is the Mexican Water Trading Post; if you need gas, get it as the next station is not until Rock Point.  Make a right onto Route 160 and drive until you see the signs indicating Route 191 and Chinle are to the left.  If you keep driving straight, you will end up in Kayenta and from there you can travel up to Monument Valley; if you go right on Route 160, you'll either end up going past the Four Corners Monument, or onto Route 64 into Shiprock, New Mexico.  Confused, then see the map I've posted up above for reference.

Cameras ready?   Basically I'll be giving you location details as I've found them; might be the actual town, might just be a mile marker.  At mile marker 499, we spied this cave like opening with sandstone that stretched along.  Might as well warn you that the shoulder on this highway is pretty narrow for most of the way, so you might have to find a pull in point somewhere and walk back to take photos of interesting areas, or pull off onto the grassy (more weeds truthfully) section.

The first sighting in the distance that will definitely catch your eye are of two mesas (one long, one more square like) and that will be around Apache County Route C489.  These are called Round Rock and Little Round Rock; I'll post more close up photos of them later on in this post and, yes, that is an arch in Round Rock that you see. 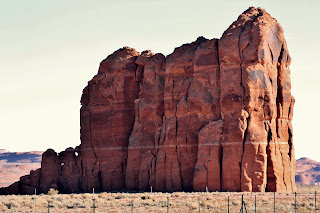 Hang onto your seats, here comes another formation with arches on it; Red Mesa Mountain. You know, when these formations are in the distance, they look small, perhaps not impressive at all. That is until you actually come up to them and see how massive they truly are. You get a true perspective  of the dimensions when you see a trailer home nearby. 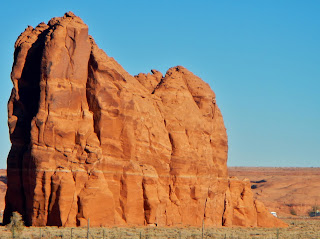 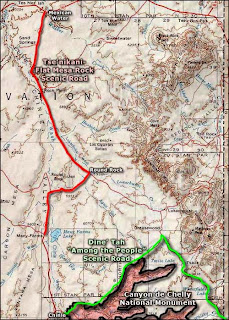 Get ready for something really spectacular, Flat Mesa Rock which you have been basically driving parallel to since Mexican Water. This system of sandstone hills, mountains and formations is 48 miles long, from Mexican Water to Many Farms which includes Rock Point, Rough Rock and Round Rock; dirt roads can be traveled to and within many of the sections. I played with the panorama setting on one camera and was able to get a complete photo from Whale Rock to Los Gigantes Buttes; but I will post individual close up photos too. 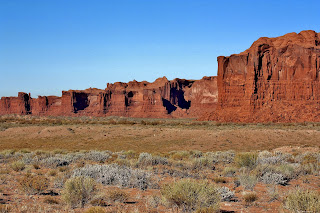 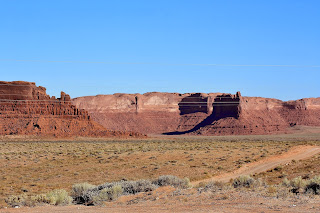 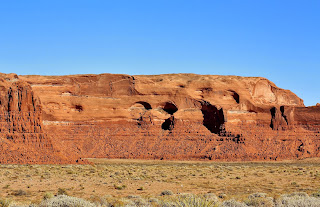 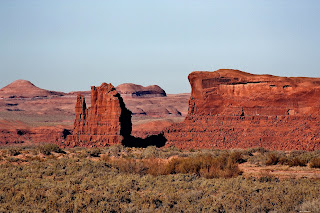 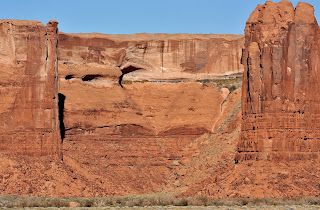 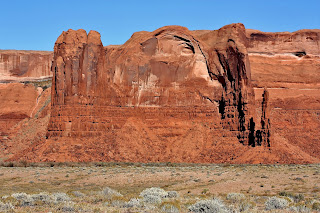 These pillars were sitting on one of the many ranches seen along Route 191.

There will come a point where you'll see a sign to turn right and go towards Rough Rock; you're still on Route 191, so you're doing just fine.  The Arizona Badlands will be around you, but you're also coming closer to the mesas I mentioned before, Round Rock and Little Round Rock. 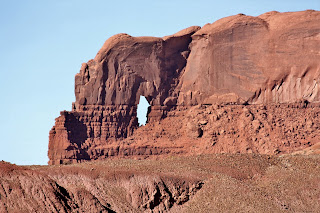 Around mile marker 476 is where you'll be able to get awesome shots of Round Rock and Little Round Rock.  Round Rock's appearance keeps changing depending on where you are seeing it from. Heading towards Many Farms, you can see the large number of immense spires, walls of pointed fins causing indentations for numerous canyon regions. Remember that arch you might have spied when you first saw Round Rock at Apache County Route C489; there it now is in all its glory.

Next stop...Chinle, Arizona; and what many might refer to as the first area of real civilization.  No, you've been traveling through civilized areas, they just weren't as built up and modernized as Chinle is.  Chinle is large, built up and busy compared to all the little towns you've already passed through; shopping center, restaurants, fast food joints and gas stations.  This is pay attention time!  You will come to a stop light at a main intersection (a Shell station boarded up will be on the left and you just passed the Burger King area) and you want to be in the left turn lane.  Make the left, a Conoco station will be on the right, so you know you're going the correct way; you're now on Route 7.  Eventually you will see a Chevron station on the left, keep going straight and there will be a sign stating you are about to enter the Canyon de Chelly National Park.  Stop at the Visitor's Center for a map (say hello to Martha who has been a volunteer for 10 years), visit the bookstore, restrooms or look at the photo display in their museum area; and this is where the story ends...for now.