Just Another Curiosity Near Monticello. 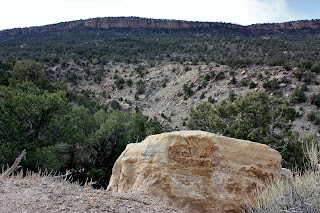 Approximately 9 and 1/2 miles north of Monticello, Utah is a pull in point with an informational board; a section of Route 191 on Peters Hill. It's in a rather awkward place; either you've just increased speed to get up the hill, so cannot easily slow down to pull in, or you're coming down and around a steep curve and once again cannot slow down to pull in. This time though I was determined to pull in and read what was on the board; since traffic was slim to none with tourist season over, I could drive slowly enough to be able to pull in without worrying about on coming traffic, or something tail gating me from behind. 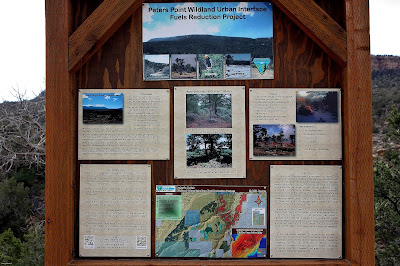 Welcome to Peters Point; now who the heck was Peters?  Good question, but according to written records such as "Saga of San Juan" and "History of Northern San Juan County", Peters (last name, no first name known) drove 2000 head of cattle into the canyon area in 1880; he built a cabin from local rock at a nearby spring and that's that.  Now in 1880, the Mormon "Hole in the Rock" pioneers settled in Bluff; Monticello was settled in 1881 and in between was Verdure already settled previously.  Was Peters one of the original pioneers, or one of the Verdure cattlemen that had been driven out by the pioneers?  Personally, I'm going with the latter idea, since the pioneers did not bring 2000 head of cattle with them over that rough terrain; so they must have been here with the Verdure cattlemen.  Then suddenly I come upon a written transcript of an oral history of a woman from La Sal who verified that Peters was indeed one of the Colorado cattlemen. "History of La Sal, Utah Area as given by Norma P. Blankenagel" can be found at the Eastern Utah Human History Library; it is part of public record and history of San Juan County. 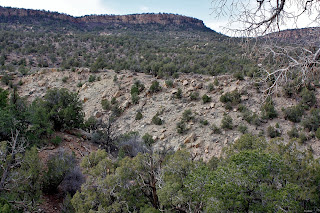 So back to Peters Point itself which is approximately 7800 acres of land managed by the BLM.  It is essentially a wilderness study area with goals of keeping the natural wild, and wildlife, from being encroached upon by urban development.  However, natural growth is also maintained to keep it from becoming a potential fire hazard, especially during the drought seasons.  Good!  As much as I would like to see the city of Monticello grow with more business opportunities, lets keep that within the city limits.  The natural beauty and wonders that surround the city are what draw visitors to Monticello; and why the residents love the area  so much, and that includes my husband and myself. 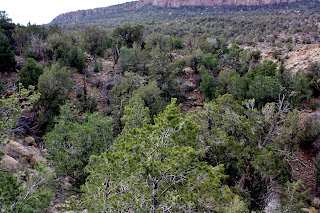 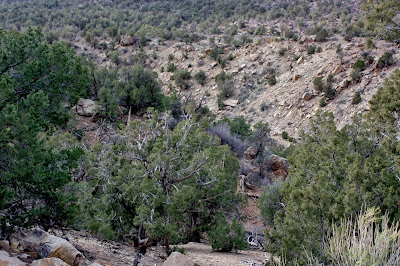 Unfortunately, while visiting the pull in area, litter could be see on the pavement and down amongst the trees; so I have to ask, and no, I am not politically correct at all, but why are people so stupid?  Seriously, have they no clue as to what the trash can do to the environment; how it can make ill or even kill the wildlife?  Is it so hard to bring their trash to a designated receptacle; what is the point of being so lazy and dirty?  There just has to be something mentally wrong with these individuals, simple as that.

Anyway, whether you're heading on up Peters Hill towards Monticello, or wending your way down to the valley and see Church Rock in the distance; slow down, pull in and take a gander at Peters Point.