Canyonlands, the Needles District - Part One.

So many times I've been asked, "How do I get to Canyonlands?"  Ok, well which section, do you want, the "Needles District" or "Islands in the Sky"?...and the confused looks begin.  Off Route 191, and Church Rock is practically right across the roadway, is Route 211 and this is the most direct road to Canyonlands' Needles District.  There are signs, several signs in both directions stating Route 211 or Canyonlands National Park; the latter one just doesn't state "Needles", so folks tend to say, "there are no signs!"  Yes, there are, so have we cleared that misconception up?  Great!

Route 211 has a lot to see on it even before you get to the entrance of the National Park, so while it may take about a half hour to drive to the park, don't set your clock to it.  Besides the desert and slickrock landscapes, there is the ghost town of Marie Ogden's Home of Truth. It was a religious cult that didn't last too long; old timers in Monticello don't want to talk about it; younger people have no clue about it; but I enjoyed researching and revealing this Monticello secret. Then there is Newspaper Rock, a rock wall full of ancient petroglyphs; and just nearby is a jughandle arch at the entrance to Shay Canyon.  As the vistas open up before you, Bridger Jack Mesa and the Six Shooters loom up ahead; pretty soon you'll see the Needles Outpost which is basically your last chance for gas, water and snacks before entering the Park.

The paved road throughout the Park is only about 6.5 miles, the rest is rough terrain and you will need to get a pass at the Visitors Center to be able to take a four wheel drive vehicle onto most of the roads. Hiking is allowed, but make sure you get a map and are prepared, as most of the hikes require 3 to 7 hours into the back country. Car drivers shouldn't be discouraged; besides the paved road, the trail to Cave Spring is graded dirt and, while a little bumpy, is quite drive-able.  6.5 miles might not sound like much, but you will see more than you expected and that is why I've divided up this Park write up into two parts.  This part one will just be a taste, part two will be the whole enchilada!    Truth be told, if you just want to drive, look, but not stop; you could do the entire drive in about an hour.  We were there for three hours and that included a roadside picnic lunch while sitting on slickrock.

Ok, so you stopped at the Visitors Center (highly recommended by the way) and you're on the paved road.  Little short story here, as we were leaving there was a young man (with backpack) hitching a ride, so we stopped to help him out.  His name was Eugene and was visiting from Buenos Aires, Argentina; he was a very polite young man and was so happy to be driven as far as we were going.  Our first stop was Wooden Shoe Arch which wasn't too far, but close enough to the road to Elephant Hill which is where Eugene wanted to go to anyway.  See, we have a nice little tale about a foreign visitor, and hopefully he related to his countrymen how nice Americans can be. 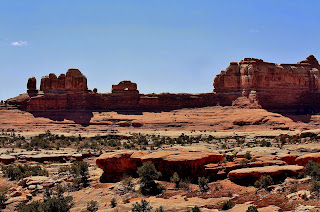 Anyway...Wooden Shoe Arch might not look impressive, since it is far in distance.  Having a zoom lens on my camera was a big help in getting more detail on it.  Hint, if you don't have a zoom lens on or for your camera, invest in binoculars.  Besides seeing Wooden Shoe Arch more clearly, I was able to get a view of the Needles. 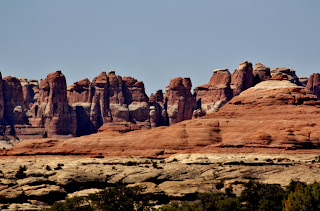 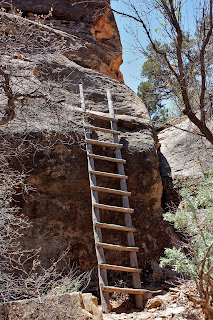 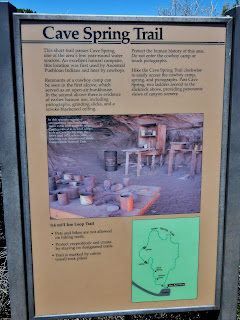 As we were leaving the Wooden Shoe Arch viewing area, we noticed a sign pointing towards "Cave Spring", so went along the dirt trail.  Cave Spring is the location of an old cowboy camp; there are petroglyphs within the caves and a couple of wooden ladders to climb to complete the entire loop.  This is a fun place to visit!  Going into and out of cave like areas, a few have water in them and there is vegetation growing right out of the rock walls.  The scenery is beautiful and you can see one of the Six Shooters in the distance.  We found a couple of pack rat dens, but no one was home at the time; and while we did find piles of guano, no bats were roosting over our heads.  Like I stated before, the dirt trail can accommodate cars; there is really no excuse to miss this experience, so do it! 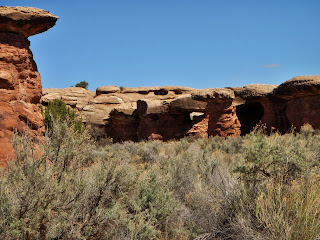 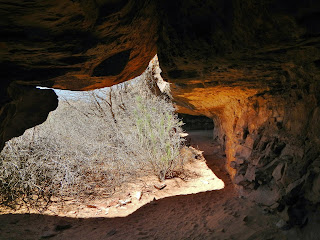 Here come more photos of the Cave Spring Area; I told you, this is a great place! 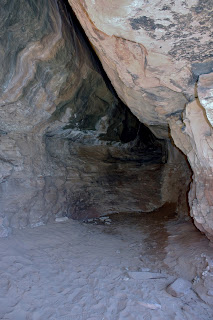 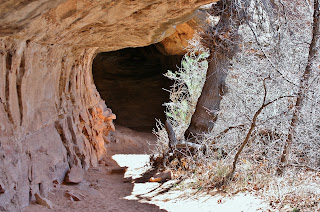 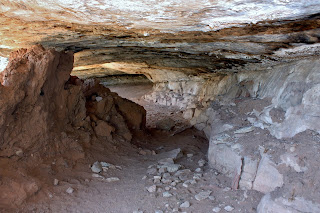 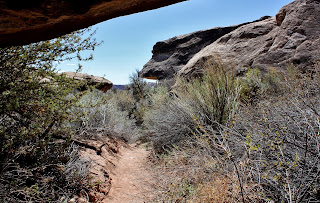 This concludes the first part of our adventuring through Canyonlands National Park - Needles District.  I hope this little taste gave your appetite for exploring a want for more; if not, it is truly your loss.

Posted by Mary Cokenour at 1:52 PM