Canyonlands, the Needles District - Part Two or the Whole Enchilada.

A good many people who visit the Needles District expect to be up close and personal with the formations that they have seen on postcards, in travel brochures or in books about the area. Not going to happen; well not going to happen unless you are going to do the eleven mile hike to Chesler Park or Elephant Canyon; or the 7.5 mile hike from Big Spring Canyon. Then there is the Needles Overlook located in the Canyon Rims Recreation Area; yes, you'll be a bit closer to the Needles themselves and the hike will only be about nine miles. I wanted to get this information out of the way immediately as this is one of the top questions I usually get asked.   Should you not go to this Park then if you cannot be as close as you want to the Needles?  That's up to why you want to go; how important is it to you to simply experience the area, or is a photo all you want?  If it's the latter, then simply buy a photo and be done with it; for the former, well keep reading and see what other adventures await you in Canyonlands - The Needles District. 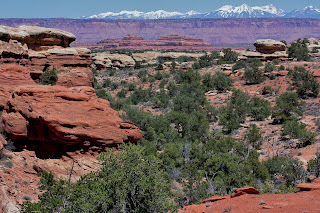 So we now follow our intrepid adventurers, Roy and Mary, as they have left Cave Spring and are back on the paved road heading towards Elephant Hill.  The road eventually turns to unpaved, graded roadway, but is car accessible just like the road to Cave Spring.  All along the road we saw awesome formations of sandstone, and slickrock dropping off into canyons.  We stopped at one pull-in point to have our picnic lunch; the sandstone in the area had formed itself into, what we saw as, little tables, so how could we resist the invitation to dine.  As we ate, folks driving by would wave and shout out "Hello!", and we would answer back in kind; it was a most memorable and pleasant experience.  We did a little exploring and I found a sandstone rock that the swirling wind and sand had formed into a seashell shape.  I so wanted to take it home, but a photo would just have to do.  After cleaning up our dining area, back on the road we went and couldn't help noticing how the formations began to resemble the legs and feet of elephants.  Now at the very end of the paved road is a parking area, with picnic tables for those who don't want to sit on the ground or rocks I guess.  The Elephant Hill Trail itself  is for hiking or Jeeps; I know brochures say 4 wheel drive vehicles, but a sign at the trailhead said Jeeps required for trail driving, so...anyway, three miles in will bring you to the Chesler Park Overlook.﻿﻿ 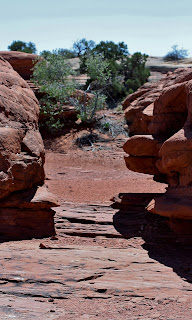 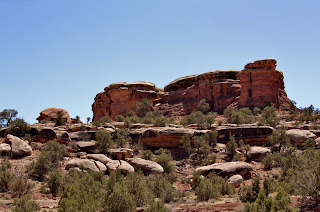 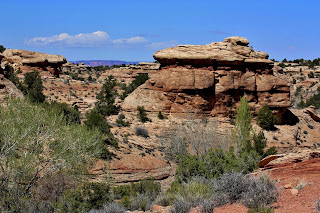 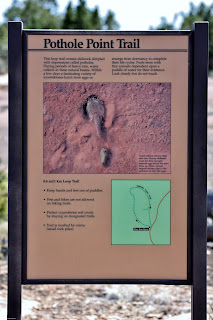 We dumped our garbage into the trash bins at the picnic area and ended back out towards Pothole Point. Roy was especially looking forward to this spot as he often talked about how microscopic marine life (brine shrimp mostly - remember "sea monkeys"?) lives in the holes. That is if there is water in the potholes, and with the drought season we were in at the time, no water; therefore the life was in hibernation.  The views in the area are spectacular though, from the Needles to the White Rim located at Canyonlands - Islands in the Sky (accessible via Route 313, eleven miles north of Moab).  Again you'll notice how the elements of wind and water have formed the sandstone into interesting formations. 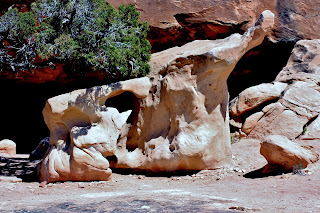 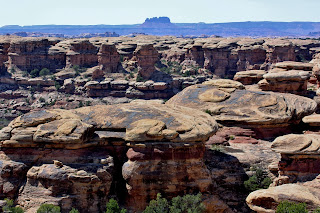 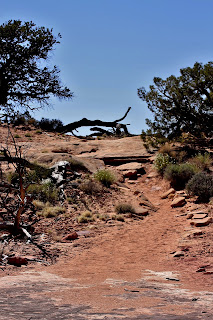 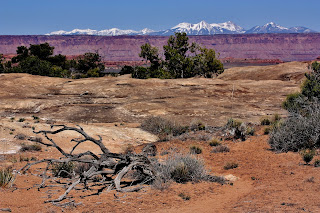 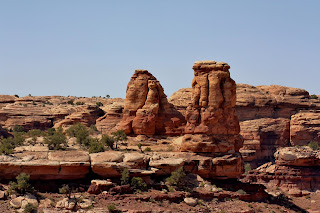 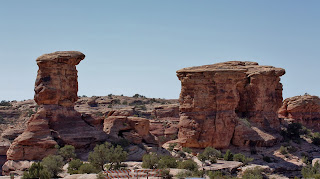 Now before I post photos of the Needles, we're going to make the last stop on the paved road at Big Spring Canyon Overlook.  Once again you can see out as far as the White Rim and even a formation called "Murphy's Hogback".  In one photo I left the information sign and road barriers in, so you can see the sheer immenseness of the formations in the area; it definitely leaves you in awe.  From this area, the hike to the Needles themselves is only 7.5 miles; closer than the eleven miles from other places.  We were so busy dealing with our eyes popping out of our heads (not literally of course) from viewing this area to even look for the Needles.  Don't say I didn't warn you about this section of Canyonlands having lots of great adventures within it. 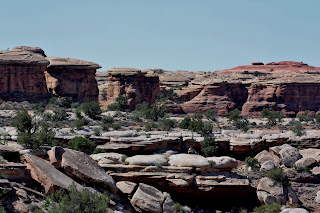 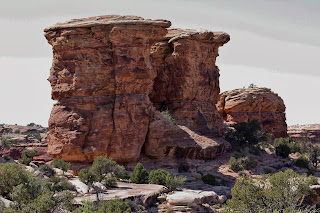 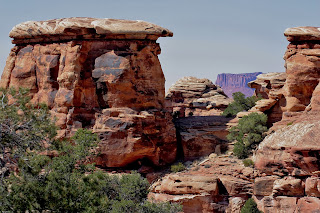 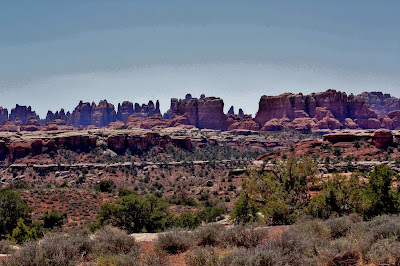 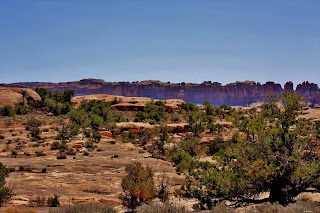 Just to let you know, taking photos of the Needles, from a distance, can be rather difficult due to the haze.  Even though I had a hood attached to my zoom lens, the haze still caused unclear photos and I've done my best to clean up the ones I am posting.  The Needles are red and white spires of Cedar Mesa sandstone; hundreds extending for miles!  It doesn't really matter if you're not up close and personal, it's impressive from near and afar.  Between both of our cameras, we might not have been able to take National Geographic quality photos, but we can happily say, "We were there and we saw them!". 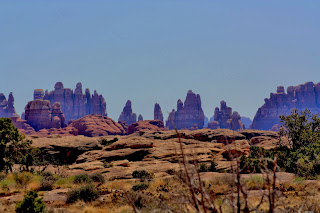 I've read some reviews on Canyonlands - The Needles District and they were negative because of the distance from the paved road viewpoints to the Needles themselves.  As I said earlier, if all you want is a photo, then go buy one; if you want to experience a park full of astounding natural formations, then visit and enjoy.
Mary Cokenour
﻿