As I've warned before, winter in San Juan County shows itself whenever it feels like showing; calendars mean nothing to the weather in this area. Our first snowstorm began on Friday, November 22nd with hours of rain mixed with snow; basically slush was coming down from the sky and we had a good four inches before it turned to pure snowfall. From around 12 Noon Friday to Saturday morning, snow, snow and more snow; it took a break long enough for everyone to clean their vehicles and driveways; long enough for the snowplows to come through and push boulders of ice and slush back in front of those clean driveways. Saturday night the snow began again and finally ended on Sunday; normally a day for rest, but cleaning snow once again was top on the daily menu.  All in all we received about a foot of precipitation and while it may be an inconvenience, the snow pack will help to fill the reservoirs, so a blessing in disguise.  Here are a couple of photos to help you see what a sudden snow storm is like here; one is a view outside one of my windows; the second is showing you why the view is the why that it is.


Now while there can be a variety of snow sports out here, (and lucrative if businesses would take advantage of the season) that also means that visitors to the area should do research and take precautions.  You cannot go willy-nilly up into the Abajos, especially if you're unfamiliar with them, and wonder why "Search and Rescue" is now out looking to rescue your sorry butt.   A good example of this is the backpackers who needed to be rescued the very weekend of our first snowfall.


It did warm up a bit over the week, sunny and clear skies predicted for Thanksgiving; and this is where the strangeness of our weather grabs you again.  I was headed out to Moab around 11am on Thanksgiving Day to celebrate with Roy's mom, and his aunt visiting from Wyoming.  The sky was a brilliant blue, hardly a cloud visible, temperature around the 40s; heading north on Route 191, I was ready for a stress free drive.  HA!!!  I was driving down Peters Hill and had just rounded the turn where normally Dry Valley and Church Rock would be the vista before you and saw this.....

Pulling over, I took a few shots since it was a pretty sight to see; but I'd seen this before and knew it would be clear again once I got through the initial cloud.  HA!!!  I was about to be punked big time!

Welcome to San Juan County's newest thrill ride: Riding the Clouds.  Oh no folks, that isn't fog rising up from the ground due to humidity, yada, yada, yada; those are clouds that have descended to meet the cold rising up from the snow that still covered the valley.  Seatbelts on, pull bars down and in a locked position, please keep hands and arms within the vehicle, here we go.....
﻿ 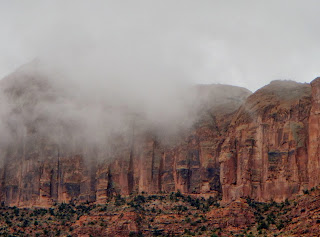 The low lying cloud cover continued until I reached Hole N' the Rock and the Kane Springs rest area; but it hovered over the high sandstone cliffs all the way into Moab. 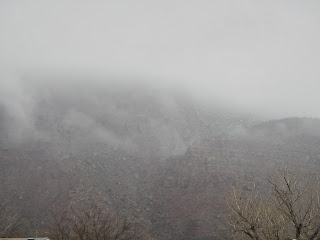 I had a most enjoyable time with Roy's mom and aunt, but my instinct told me to get back on the road home, so by 3:30pm I was heading on out of Moab and south on Route 191. As I approached Wilson's Arch, I had to take photos, since the cloud cover had created an eerie and mysterious scene. Movies like Stephen King's "The Mist",  John Carpenter's "The Fog, or 1958 classic "The Crawling Eye" came to mind.


Sunday began a whole new adventure when we all awoke to a frosty wonderland outside. Only about a quarter inch of snow had fallen overnight, but it was the frost that was beautifully fascinating. A delicate coating causing feathery fronds on plants and tree limbs; mist floating through the air intensifying the air of mystery. The world had turned completely into black and white.


Monday was a complete repeat with sun and blue sky finally making an appearance today, Tuesday. Here's the kicker though, the weather report is for snowfall tonight and into Wednesday; here we go again folks!

How did you enjoy the thrill ride, Riding the Clouds?  At one time my feelings would have been somewhere between anxiety and aggravation; now it's more like, just another day in the life.