Standing in Four States at a Single Moment.

I live in southeast Utah which is part of the Four Corners area. What exactly does that mean? The actual four corners are where the boundaries of Arizona, Colorado, New Mexico and Utah meet; no where else in the United States does this occur.  The dispute over the borders goes back in history prior to the Civil War; when the United States was warring with, not only the Native Americans, but Mexico over territory.  In 1875 a stone shaft was embedded in the ground to mark off the final survey, but it was not until 1912 that the area was enclosed with a cement shield; a brass plate was set in the center in 1923.  Several times the cement area cracked, even the brass plate broke; 1992 an elevated cement area was built with an aluminum-bronze plaque set in the center. 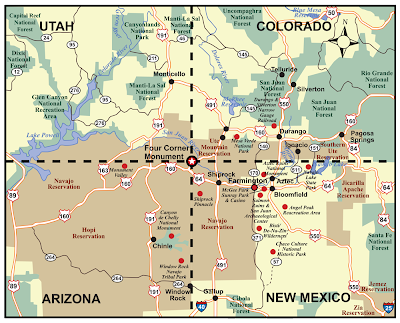 Guess what?  In early 2009, a survey was published stating that the plaque was in the wrong location and needed to be moved 2.5 miles west.  The BLM and Navajo Nation got involved and it was definitely determined that it was slightly incorrect; only .34 of a mile off center and needed to be moved east, not west. 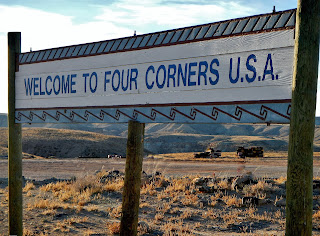 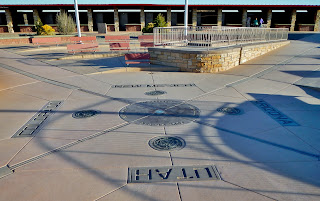 So, in 2010, the entire Monument area was rebuilt; elevated pad was removed, plaque set in the correct place with four other plaques set around it in dedication to the four states.  An elevated viewing and seating area was built around the plaque area; the vendor stalls were rebuilt with cement and stone, so no more rickety wooden ones.  Instead of parking directly in the Monument area, there is now a parking lot outside where you can enter from the Arizona side, or walk around the outside and enter through one of the other states. 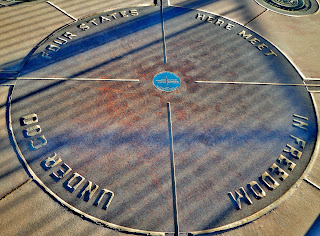 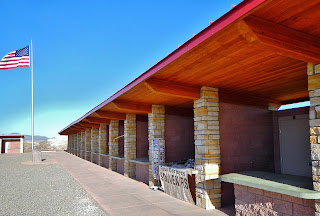 The various vendors, representing their home state, sell souvenirs of the Monument itself, or of the state; Native American arts and crafts are beautiful and you will find it very difficult not to purchase an item from a vendor in each state section.  There are a few vendors who sell Navajo Fry Bread, so look forward to this treat. 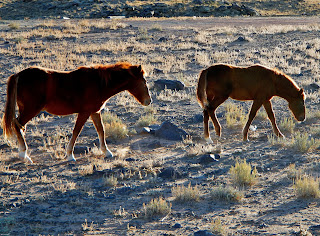 Now walking around the exterior of the Monument, the landscape stays pretty much the same: sandstone hills, desert, sagebrush, cacti; if you're lucky, a herd of wild horses could be grazing, or even walk into the Monument area itself. 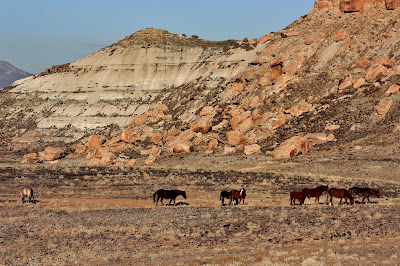 The roadway to the Monument is off of Route 160, the Arizona side; there are signs, so you cannot miss the turn.  There is a fee of $3 per person (not vehicle); this is a Navajo Nation Tribal Park, so National or State Park passes are not accepted.

Did Roy and I stand on the center plaque?  Of course we did!  Did we feel a disturbance in the force; did we have a spiritual awakening?  No, but it was cool to do; we now have bragging rights that we did go there, and we did stand on four states at the same moment.

Mary Cokenour
Posted by Four Corners Foodie at 11:59 AM