Pair of Ears to an Upside Down Sombrero.

One of the most popular routes to travel in San Juan County is Route 261.  It can easily be accessed from State Highway 95, and you'll be on it for various reasons.  There are all the ruin sites at Butler Wash and Mule Canyon, Comb Ridge, Natural Bridges National Monument.  The one that everyone wants to see nowadays is Bears Ears which has been getting a lot of hoopla for the past few years.

Have to admit, at first I was for the proposed National Monument; I wanted to see more businesses develop, more housing, employment opportunities for all.  However, I sort of went against it due to those, who didn't even live in San Juan County, trying to establish rules and regulations for the local residents.  All the verbal fighting, busing in of protestors for and against, and they didn't even know what it was they were protesting about.

What really put a sour taste in my mouth is, being an informational guide, being challenged on my opinion of the National Monument.  At that point I developed the "I don't care" stance.  Asked whether I was for or against, my response was "I don't care", and stopped the conversation right then and there!  Having polite discussion is one thing; attacking someone immediately on their opinion, before it's even stated, and the attacker doesn't even know why they're doing it...yeah, not polite at all.

So, if you're needing to see the Bears Ears themselves, here is how to find them.  Once on SH 95, keep on driving west until you see the sign that says, "Natural Bridges/Bears Ears", make a right onto the roadway.  It splits, left will take you to Natural Bridges; keep on going straight and up the side of the mesa you will go.  Yes, left hand is paved.  No, up the mesa way is unpaved; and if it's wet, especially after heavy rain and/or snow, chances are you will get stuck.  This way will take you up to the Ears themselves, drive through them, and into the Manti-Lasal National Forest you will go.  Now, do they look like ears when you're this close to them, nope, nada, nyet, nein; just two buttes with no similarity in shape.

Now back to where I first started this write up, Route 261.  Once you see the sign for it, make a left hand turn, and this roadway is paved until you reach the junction for Muley Point or the Moki Dugway.  But wait, don't keep driving all the way yet!  Once you're on 261, go about 3 miles, pull over, stop the vehicle and get out; be careful of any other vehicles on the road.  Now look back from where you came from, yes, I need to add this, look towards SH 95.  Now you will see and understand why the Bears Ears are called the Bears Ears; imagination is a plus.

No imagination?  Outlined in photo, do you see it now?
In the book, Utah's Canyon Country Place Names, Vol. 1, by Steve Allen, page 43 has references to the origins of the Bears Ears name.  Shasha'a is Navajo and dates back to around 1620; Kwiya-gat Nügavat is Ute (no date listed), and in the 1700s, the Spanish explorers called them Las Orejas del Oso.  While all mean, in some form, Bears Ears, there was no story listed behind the name; let's presume then it's due to the ears and face seen from Route 261.

Back in the vehicle, start driving again; you'll be going through the Grand Gluch/Cedar Mesa area which allows camping and hiking.  Stop at the BLM office in Monticello to get information and permits, or at the Kane Gulch Ranger Station located on Route 261 itself.

Eventually you'll see, on the right, a sign for Muley Point; 3.4 mile gravel, yes gravel, road (7.4 miles round trip) which ends at slickrock ledges overlooking the walls of the Goosenecks, a trail into Johns Canyon, and a view of Monument Valley in the distance. 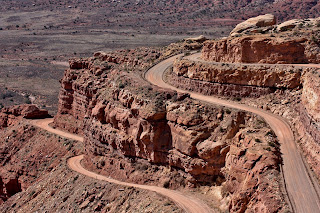 Once you're back to 261, head on down the Moki Dugway and have a most awesome ride down the side of the Cedar Mesa. 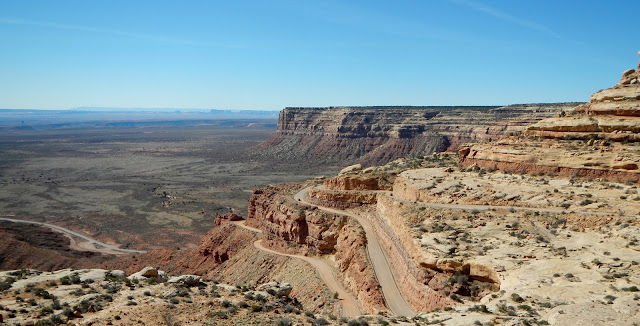 Just taking a break, watching hubby do his video thing.  Many times I have been asked to be an actual tour guide, but wherever I was working at the time wouldn't let me...liability insurance thing.  I may not be with you in person, but I know my travel guide will get you to where you want to go.
(Disclaimer needed:  Yes, I own this travel guide.  No agency, business or any other person owns it.)


Enough boring stuff.  We always enjoy riding down the Moki, as both of us can see the views of the Valley of the Gods and Monument Valley.  Riding upward is kind of lame, well for us, as the passenger is usually staring at the red rock walls, while the driver is too busy looking upwards at the road.  Hey, but at least we tried both ways to see which we enjoyed most; so please do that as well.

Once down, you can take the 17 mile, one way, dirt/gravel (no, it's not paved) road through the Valley of the Gods, or continue onto pavement to Goosenecks State Park.

By the way, I'm often asked the best time of day to be in a certain place.  Answer is, anytime!  Sunrise, morning, midday, sunset, even during the night when the stars are shining brightly (hopefully you're camping or outside somewhere to enjoy them).  Alright, darkness of night might not be the best time for sightseeing, but what I'm trying to get clear is, "Don't limit yourself!"

Here is Mexican Hat Rock at sunset and it's so intense! 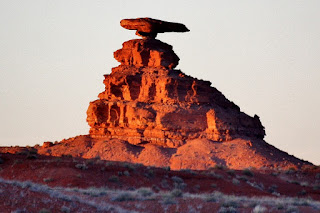 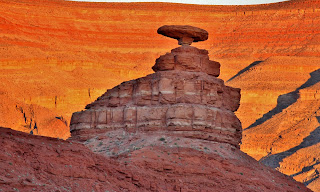 Continuing on towards Monument Valley, you'll pass by Alhambra Rock.

Oh, and now let's get calm here; yes, Monument Valley is an exciting, scenic place.  Yes, it was featured in the movie Forrest Gump, but you're on a major thoroughfare going through, it's a highway!  Pull over in designated parking areas, there is a ton of them all along the highway.  Don't stand, or lay down, in the center of the highway....this makes you a speed bump!  The speed limit is between 55 to 65 miles/hour; you are a traffic hazard if you suddenly stop and jump out of your vehicle to take photos.

*sigh*  I can only give a warning, but can't make anyone heed it, if they wish not to.  Please don't leave your brains at the state border line, be smart and be careful on your journey.