Over six years in tourism, and many a, "Did you think about that before asking it?" question has been heard by myself, and many fellow tourism industry people.  If we all got together, wrote out our stories, we'd end up with a best selling book on the nature of "lost visitors".  Of course I'm talking about the people who care about the tourists and "passing through" visitors.  We care about where we live, we love to brag about the sites to see and visit, but most especially, we want people to be aware of do's and don't that will protect the sites, as well as the people.

There are those, who work at centers, who just don't care...period.  You can easily tell who they are; walk in and don't even get a greeting or acknowledged.  Oh yes, that's a sign right there that you are not important to the person at the front counter.  Ask a question about a site, and the only response is a finger pointing in a direction; usually there are display racks full of information in that direction.  I worked with one woman who, when asked if she was from the area responded with, "Yes, I'm born and raised here, and don't like outsiders."  Oh no, she didn't last very long at all; customer service was definitely not her specialty.  We worked with her often, but her attitude never improved; she didn't want it to and only lasted at each new job for a few months.

Personally, my hubby and I have traveled as much as we can afford to.  We know which visitor centers have the best staff, and which ones will, or should, close down with the nasty staff they have.  It's not a particular area of a state or a statewide issue, sometimes it's who did the hiring, do they train thoroughly, do they check on staff performance, do they even care!?!  It's the nature of the beast for any business, really, that deals with the public; it succeeds with quality - atmosphere, goods, staff.  Failure comes from not caring, or treating the business like a hobby; it fails when the owners get bored with the hobby.

I devised the following Frequently Asked Visitor Questions to help new employees that had either not worked with tourism before, or did, but were having "attitude" issues.  Now you might ask, "Why work in a job that you dislike from the very beginning?"  Well, maybe it's the only job available; or the person believes that it's such a cushy, easy job, anyone can do it.  I've met several of both types, but believe me, there are many more people out there who love, absolutely love, dealing with the public.  Don't be discouraged by one center's employees, just stop at the next, and the next, until satisfied.   Enjoy the journey!

While many visitors will ask similar questions, many will ask a few that require simple, common knowledge of the area; while other questions might make your head spin in confusion.  Don’t know the answer?  Simply look it up, now you and the visitor have both learned something new!

Occasionally questions of a political nature (mainly Bears Ears National Monument) or religious (Mormons, polygamy) will come up.  Simply stating that you do not discuss these issues with anyone stops the questioning person in their tracks.  Do not get hooked into a debate which might escalate into an argument due to disagreements.


Most Popular Question is:  Where Am I???

Monticello, Utah; established in 1888, and is the County seat of San Juan which is the largest county of Utah.  Bluff, Utah was actually the first established pioneer (Hole in the Rock) town, in 1880.  Blanding, Utah was the third, founded in 1905, originally called Grayson, but changed its name in 1913.

2nd Most Popular Question is:  How much longer until I reach Utah??

Find out where they have traveled from and where they are trying to get to.

Funny story; in one week, I had 2 different couples ask this question.  They told me they had been staying in Moab for a few days, visiting Arches and Canyonlands (Island in the Sky) National Parks.  I explained that Moab is in Utah, so they’ve been in the state for a while; both couples were from the USA, so no foreign language difficulty there.

3rd Most Popular Question is a dual one: Why Am I here and What is there to do?

This will take some investigative work!  Ask questions about interests to find out the best places to send this type of visitor.  Guide them to the tourism information available for the 4 States of the 4 Corners Region – AZ, CO, NM and UT.

Heartwarming story; a man came into a center I was working at.  He explained he was from New Mexico, had just retired, and his wife made him buy an RV (bus type) for traveling.  He was very upset as he explained, "I don't know where I am, or what I'm supposed to be doing".  First, I asked his interests, then I started gathering information that would help him on his grand journey.  I pulled out some free maps (state and county), and my handy dandy hi-lighters.  Working together, I was able to hi-light routes to take to various sites throughout the 4 Corners region.  It took about 1 and 1/2 hours, but at the end, well I thought the man was going to hug and kiss me.  A big smile and handshake were a perfect thank you.  He took my business card, and sent me a lovely email, with photos, of him and his wife on their adventures.

This was not an isolated incident, and I was so happy to hear back from visitors; not just that they had a great time, but they appreciated all I did for them.


What 2 mountains ranges are in San Juan County, and what are the tallest peaks? 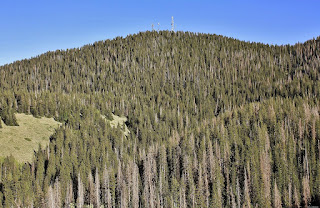 What is the name of the forest within each mountain range?

Does Monticello own the Wind Farm, and get its electricity from it?

No, they are the property of sPower which has an office on Circle Drive in Monticello.  The windmills finished construction in December 2015 & were fully operational by March 2016.  No, Monticello does not get its electrical power from the windmills, but from Empire Electric based in Colorado.

Which is better, Canyonlands Needles, Islands in the Sky or Arches?

Each park is unique and beautiful with many outstanding arches, formations, Native American ruin and rock art sites to visit. Maps of each park are available to help determine which area would be more accessible to those with a time/travel schedule, or walking/hiking, issue.

What Amenities are at the Parks?

Each park has a visitor center with gift shop, restrooms and water filling stations; they are staffed with very knowledgeable rangers to help with questions about the parks.   It is advisable, before going to a park to have a full tank of fuel in the vehicle, 3-4 quarts of drinking water per person (double if hiking), protein snacks and a picnic style meal to fully enjoy the park experience.  Wearing sunscreen, a hat and light colored clothing will also be helpful.

Natural Selection Story; Young woman, 20-something, walks in asking about all day hikes in Canyonlands - Needles.  She is wearing a tank top, short-shorts, flip-flops and carrying a half full 16 oz. bottle of water.  I begin to explain the necessities she should have with her, including sunscreen, wide brimmed hat, etc.  She cuts me off stating, "I'm fine the way I am and don't need lots of water, it'll just make me have to pee."  Walking off with a free map and guide of Canyonlands, all I could think was, "There goes DNA that doesn't need to be in the gene pool."

Search and Rescue in Utah is the busiest in the country, and yes, because of people like this young woman.  Warnings are not given to "keep you from having fun", but to keep you safe! 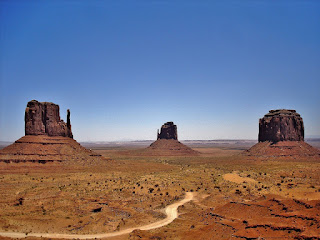 Does 4 Corners Monument and Monument Valley Tribal Park take National Park, State, or any other type of pass?

What is the difference between a National Park and a National Monument?

National Parks are protected due to their scenic, inspirational, educational & recreational values.   National Monuments have objects of historical, cultural and/or scientific interest.  This is a basic answer, and since parks and monuments fall into both descriptions, when you think about it, protect and respect them…period.


Where is the back entrance to Needles?

Chances are they are referring to the one paved mountain road through the Abajos. To find it: West 200 South (2 streets south of the traffic light), make a right turn onto the street, continue 2 and ½ streets until the street curves to the left…FOLLOW the curve onto Abajo Drive and up the mountain they go.  It will be 10 miles before the sign post indicating Foy Lake to the left, or to continue round the curve onto Harts Draw Road.  Another 10 miles down to Scenic Highway 211, left towards Newspaper Rock, Indian Creek Valley and the entrance to Canyonlands Needles; or right to Highway 191. 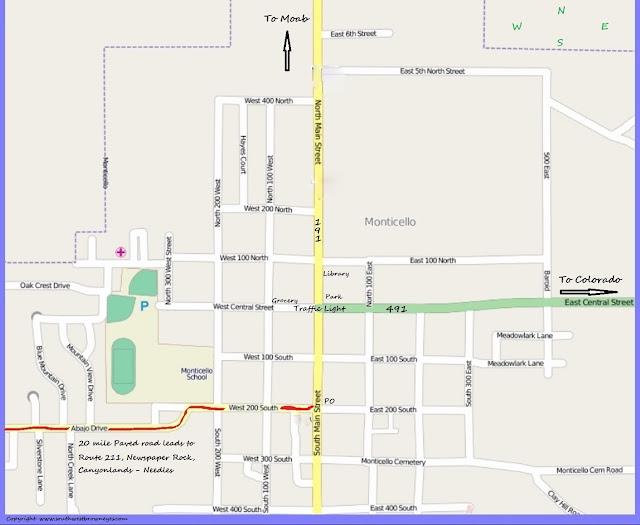 What is the difference between a Butte, Bluff, Mesa, Plateau, Anticline and Monocline?

Butte: tall, flat-topped, steep-sided towers of rock created through the process of erosion; gradual wearing away of earth by water, wind, and ice.  Buttes were once part of flat, elevated areas of land known as mesas or plateaus.  “The Mittens” in Monument Valley are examples of Buttes.

Bluff: type of broad, rounded cliff bordering a river, beach, or other coastal area. Bluffs may form along a river where it meanders, or curves from side to side; river currents on the outside of the curve erode, or wear away, the lower part of a river bank. The town of Bluff was named after the bluffs formed along the San Juan River.

Mesa: flat-topped mountain or hill with wide, flat, elevated landform with steep sides.  Mesas are formed by erosion, when water washes smaller and softer types of rocks away from the top of a hill. The strong, durable rock that remains on top of a mesa is called caprock. A mesa is usually wider than it is tall.  Cedar Mesa is an example of this.

Plateau: flat, elevated landform that rises sharply above the surrounding area on at least one side. Soft rock often erodes away on the top of a plateau, therefore topped with a hard, durable surface called caprock.  “John Ford Point” in Monument Valley is an example of this.

Anticline: the tectonic plates were lifted up to form sharply edged fins layered horizontally against each other.  San Rafael Reef and Lisbon Valley are examples of anticlines.

Monocline: step-like fold in rock strata consisting of a steeper dip within a horizontal or gently-dipping sequence.  Comb Ridge, from a bird's eye view, resembles the teeth of a comb and is an example of a monocline.

Once again, enjoy the journey and adventures; and if you're not happy with the service from one visitor center, try the next and you might just get what you want and need...with a smile!  If interested in reading about many of the areas mentioned in this post, simply put the name in the Search box at the upper right hand side of this travel blog.  Enjoy the read!