Ballroom Cave was inhabited between A.D. 1150 and 1350; there is a main alcove plus two caves.  The climb up to the alcove and into the caves is quite steep.

The Alcove is filled with various rooms with a curtain wall fronting the alcove and rooms behind it at one end. The Target Ruin is named for a large target or bulls-eye design painted on the side of a wall inside the curtain wall. 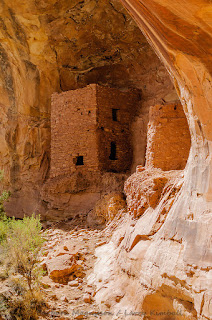 Tower House is a 1000 year-old cliff dwelling, also known as the "Waterfall Ruin" as during rainfall, a waterfall falls over the cave opening.

·          Location is 34.9 miles from Monticello, take Hwy. 191 south into and through Blanding, 24.6 miles, until the junction of State Hwy. 95, make a right onto Hwy. 95 and travel 10.3 miles.  There is roadside pullout on the right (northeast) side of the road near the sign for the “Butler Wash Ruins”, park in the pullout. If you reach the turnoff for the Butler Wash Ruins (Overlook) you have gone too far. Turn around and head back 3 - 10ths of a mile to the pullout.  There will be a fence to walk through with a BLM mylar marker. 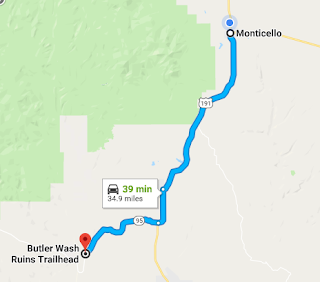 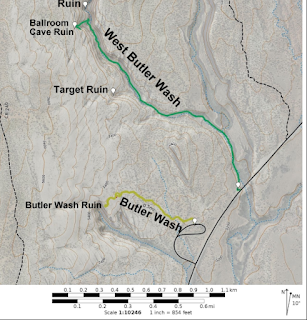