Prospector Doby Brown, He Surely Did Get Around. 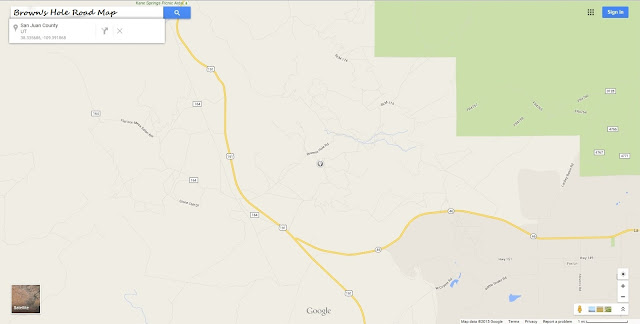 In 1882 a prospector named Doby Brown settled there for several months before moving onto his next venture in gold mining. Now Doby certainly got around Grand and San Juan counties in his hunt for the shiny ore; here's a little history on gold mining and his role in it as written in the "Moab Happenings" ( http://www.moabhappenings.com/Archives/pioneer0310.htm ).

"MINER’S BASIN, also known as simply Basin, was a mining town at over 10,000 feet elevation on Mt. Waas in the La Sal Mountains. With a peak population of about 75 or 80, the town flourished for about 20 years after gold was discovered there in the late 1880s. The first claims were staked in the area around 1888, and a formal mining district was organized 10 years later. Silver and copper were also mined in limited quantities, in addition to gold. At its heyday, the town boasted a hotel, a store, two restaurants, a blacksmith shop, a post office, and two saloons. However, the mines were closed in 1907 as a result of a nationwide financial panic, and the town died shortly thereafter. Even so, a few diehard miners remained on the mountain for decades afterward. A few log cabins and other structures still remain in the area.

Just down the mountain from Miner’s Basin was CASTLETON, a bustling mining supply center located not far from the present day town of Castle Valley. It was reportedly first settled by Doby Brown, a prospector, in the early 1880s. A post office was established in Castleton in 1882, and numerous other buildings soon followed. Castleton not only boomed along with Miner’s Basin, it also died along with it when the mines closed in 1907. Today, the remains of Castleton can be seen some 10 miles southeast of the Castle Valley turnoff of state highway 128." 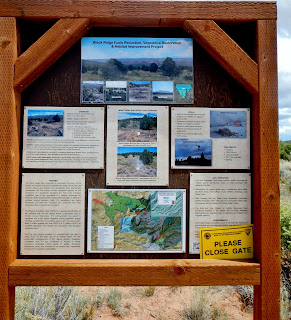 To us, it was just another road leading to "lets go see where this goes!", and since it was lunch time, a good time to look for a picnic area.  9/10s of a mile along we came to an information board about the "Black Ridge Improvement Project" which included a map.  We stayed the course along CR 130, but I'll show you what we found along the dirt trail near the info. board later on. 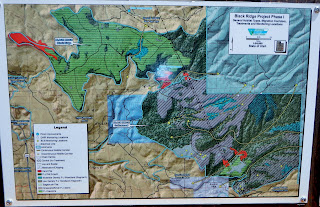 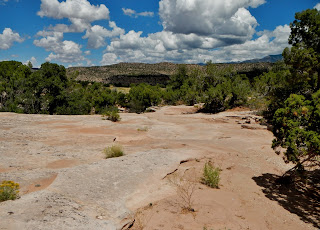 At mile mark 2, we found the perfect lunching spot; an area of slickrock lined with juniper and shrub trees, a scenic view, and obviously used by campers (the stone fire ring was a big hint). 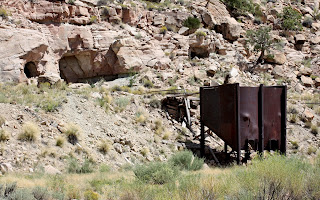 1/10th of a mile further, on the right hand side was a dirt trail; ATVing and hiking are the main sports in this area, but this trail was wide enough for a 4WD vehicle.  We saw a "building" in the distance, and wondered if it was private, or an abandoned, homestead.  Weren't we in for a surprise when we saw the holes in the stone walls; we'd found a mine!  Not one sign with any information relating to the mine, just a marker indicating to continue following the road up the hillside, so it was a often used trail.  We decided to park at that marker site; all the rain we'd had for the past month had deeply rutted the trail.  The loose, sandy soil made us nervous about attempting to drive in and out of the rut, so we hiked instead (about 2/10ths of a mile). 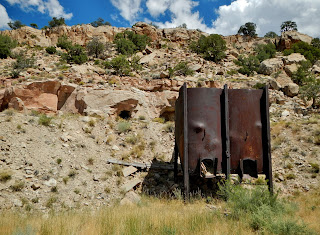 
There were four openings, three small with cold air blowing out from them; air vents?  The largest of the openings had two shafts within it; the rails for the ore carts still on the ground and leading to the huge collection container, as well as discarded ropes.  We only went inside about 12 feet, to where there were fallen timbers; as much as we would have loved to explore; being injured or killed would be a really, really bad thing.  There was evidence of a bat population living in the shafts (guano covered several of the timbers); fallen stones and timbers lay in both...not good; there was a faint "chemical" smell; yellowish powder covered some of the fallen stones.  I took several photos and we both high tailed it out of there.  As curious as we were, we were not cats, so the "nine lives" rule certainly wouldn't apply to us.  Researching Brown's Hole Road, all I could find mention of was ATV and hiking trails, as well as many abandoned mines; nothing on what ore was mined through.  Since Doby Brown settled in the area for awhile, he was more than likely looking for gold.  In San Juan County though, the ores most prevalent were vanadium and uranium. 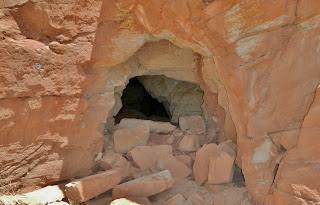 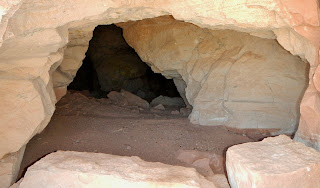 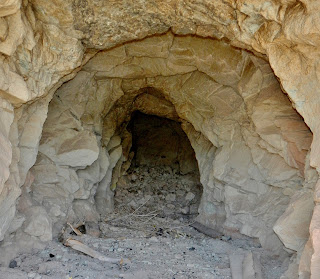 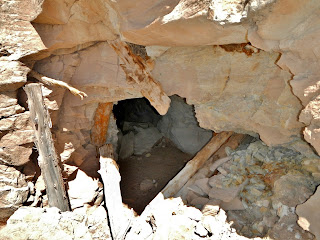 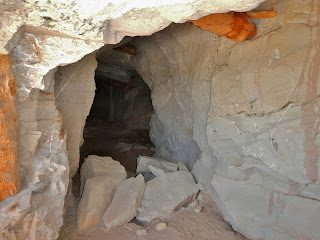 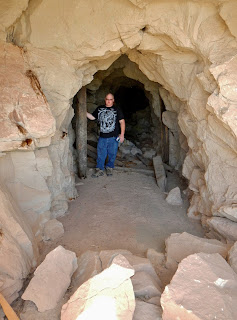 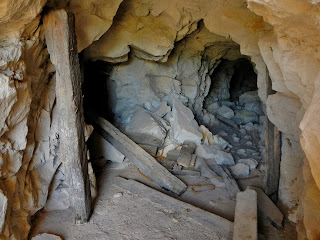 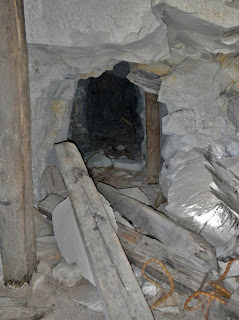 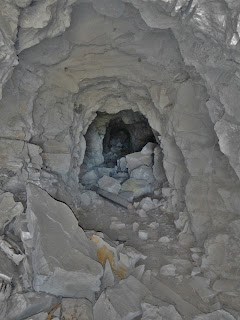 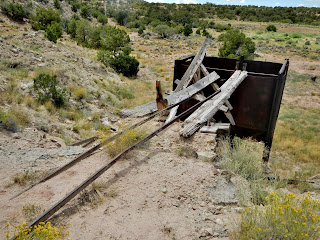 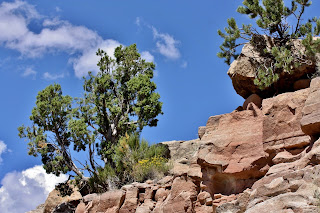 High above, trees, shrubs and small plants grew out of cracks in the walls; nature does what nature has to do to survive. 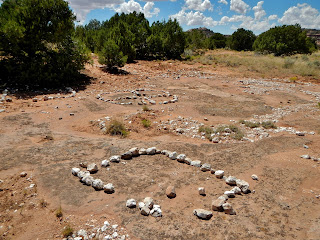 Back to CR 130, it ended at private property at 3.1 miles total distance from Route 191.  We attempted to check out further dirt trails here and there, but what started out as 4WD quickly changed to ATV only.  Back at that info. board, a dirt trail leading to the right of it followed a dry wash; suddenly I told Roy to stop the vehicle.  In an open area, along a dry rivelet were hundreds of white stones; however some had been laid out on the slickrock in patterns.  One such pattern was a "medicine wheel"; now if it had been laid out by locals, Native Americans or visitors, there was no way of telling. 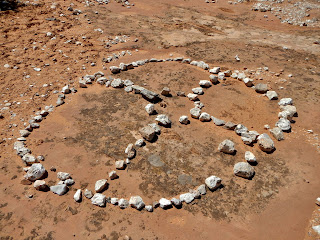 Quiet, scenic, mysterious and full of mining history; Brown's Hole Road (CR 130) is perfect for a short time out and about...don't forget the picnic!

Posted by Mary Cokenour at 4:26 PM