Now that I have your attention...

Roy and I were taking a trip up to Price for a little shopping, and then exploring, once again, Nine Mile Canyon.  I know I haven't written up our adventure of Nine Mile from March, but we found 24 new sites this time.  The map needed a few additions, and now the legend will be 3 pages long.  So, yes, this is taking a long time, as it's a huge project, especially when dealing with almost 600 photos....but I digress. 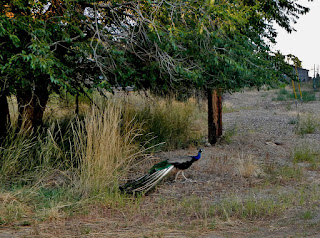 Leaving at 7am, we were about to make the turn towards Route 191 when we saw a peacock down the street.  "Do you want photos?", asked my hubby, "Yes!" I exclaimed.  So down the street we went, parked, and I took several photos; how funny I must have looked following this elegant bird as it strutted. 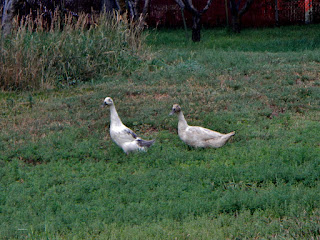 A second attempt to get to Route 191 when a pair of goslings (baby geese) decided to cross the street.  Stopping quickly, I handed the camera to Roy (they were on his side by then), and he snapped photos quickly before they were hidden by bushes.  I had seen the adults with their overly cute and fluffy newborns, but this pair were just getting into their striking adult forms. 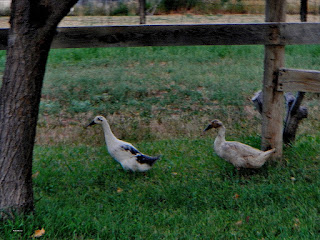 ...and finally to Route 191 northbound we drove on.  The landscape was aglow in easterly morning light; shadows sneaking in and out of the fiery red rocks.  Moab was finally waking up by the time we arrived; Main Street was beginning to bustle with visitors seeking out breakfast.  The parking area at the River Road (Route 128) already had a group of mountain bikers ready for a thrilling ride.  It wasn't until we were almost at the road to Canyonlands and Dead Horse Point (Route 313) that something strange caught my eye.  "Well now", I thought, "there's something you don't see everyday".  My voice was a whole other story, "Stop!  Dinosaurs!", I yelled.

At that moment, Roy thought to himself, "What was in her breakfast this morning?  She's seeing things."  I yelled at him to look, and to placate me, he did; "Holy S**t!", he said, and thank goodness no one else was on the road as he slide the vehicle onto the shoulder.  While I had seen two smaller ones chasing each other; Roy was blown away by the sight of the T-Rex.  Yes indeed, there were dinosaurs roaming around; the "work in progress" new dinosaur park, "Moab Giants" (website: http://www.moabgiants.com/ ) includes life sized dinosaurs.  The pre-opening is planned for 1st of September 2015 and Grand Opening is scheduled for 1st of March 2016.

The rest of our trip up to Price was uneventful; just goes to show you, open up those eyes and look, never know what you'll see.