Hayriding to Meet the Ghosts of Monticello. 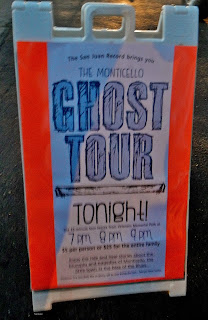 July into August is a busy time in San Juan County; 4th of July celebration down in Blanding; Pioneer Day Weekend in Monticello; San Juan County Fair at the fairgrounds in Monticello; the Abajo Enduro Race.  So it's no wonder I've finally got a moment to sit, breathe and write up the Monticello Ghost Tour.  This annual event, for Pioneer Day, begun in 2014, was a success; and even better, a sold out success for 2015!  Brain child of San Juan Record owner, Bill Boyle, it's an hour long hayride throughout town, hearing stories (some fanciful, some true) about those who lived and died, while having a good old time with friends and family. 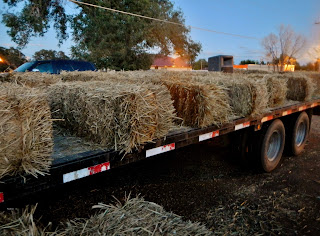 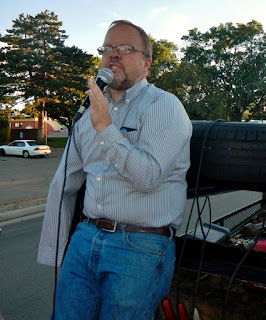 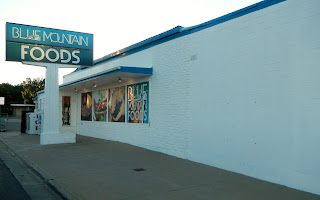 First stop on the tour is Blue Mountain Foods (local grocery) which began as the City Merc and Bill's father was the owner.  As a young child, Bill would help out at the market, but tragedy struck when one of his arms became stuck in a meat grinder.  Bill often comes to the store now to look for the ghost of his arm and see what mischief it has been up to at the store.  He tells this story with great amusement; just another day in the life for him.  By the way, Bill has a great speaking voice, so he keeps you interested and listening; a perfect tour guide.

Now I have to admit that much of what Bill told us is by memory now; didn't take notes while on the ride; now who does that!?!  So I may not be giving the locations of the buildings by order, but if you visit Monticello, just go to the Welcome Center, pick up a City map, and enjoy doing the tour.

Round the corner from Blue Mountain Foods, corner of 100 South and 100 West, there is a small building used by the EMTs, next to the fire station.  Originally the cabin here was called the "Red Onion" and the owner would rent it out.  One day, in January 1935, he rented it out to a man and a young teen girl with him; he didn't much care for the man, so didn't speak with him much.  Turns out the man was the murderer, Clint Palmer; the girl was one he kidnapped (after murdering her father), used and abused during his killing spree.  The historical fiction novel, "Hard Twisted" by Joseph Greaves was written after interviewing the girl, Lottie Garrett, plus newspaper articles and other eyewitness accounts. 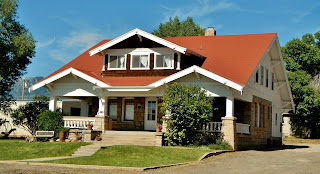 The Hyland Hotel was the first hotel in San Juan County; it also acted as the hospital when a visiting doctor would come up from Moab.  Currently it is a private residence, but the Welcome Center does have a display of artifacts that were once used at the hotel, including a guest register.  A ghost?  Well there was the visitor who fell down in the bathtub, hit his head and died; could he still be roaming around looking for his towel? 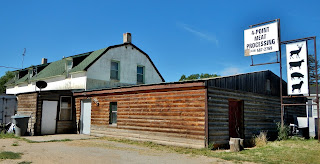 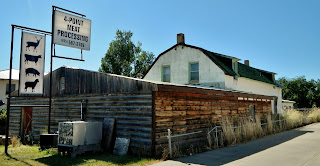 Dang those cowboys from the Carlisle ranches, shooting up at the school bell; but yes, the old brick school is still in existence; behind and attached to the meat processing facility. 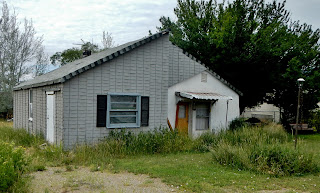 On 300 South, Latigo Gordon's "Blue Goose Saloon" still stands; a private residence now, and up for sale!  Primarily built for the ranchers and cowboys to have a place to spend time, and money; drinking the old "rot gut" and "deadeye" whiskey gave them strange ideas, like shooting at the school bell.  Now my friend Amy related to me that her ex-husband had spent several years in that home as a child.  The front room still had the bar set up, with memorabilia all around.  If anyone has remnants of the Blue Goose Saloon, please donate or loan them to the Welcome Center for display; just another way of keeping Monticello's history alive and well. 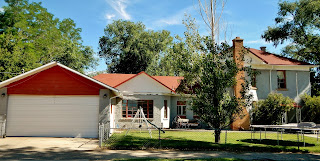 The Gerald Adams home is on the corner of 200 South and Main Street; a wife was killed while at the first dance at the church (replica at Pioneer Park).  Seems one of the men was drunk, and decided to hold everyone hostage at gun point.  A young man snuck out the window, went to the Adams home, grabbed a rifle and was going to be a hero.  Instead, the poor woman got in the way and became a casualty.

Which brings me to Main Street... 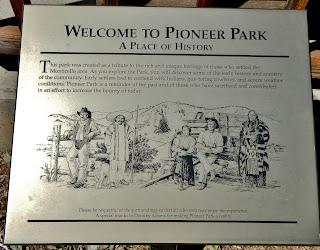 Pioneer Park contains replicas of cabins and the first church. 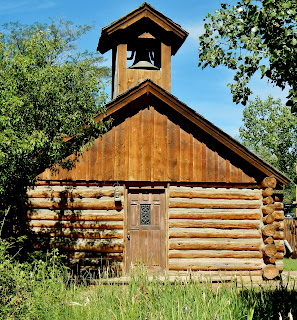 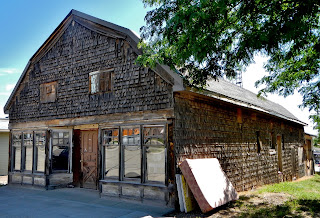 Young's Opera House was moved to its current location next to the State Liquor Store; now called Young's Theatre, it was once owned by Marie Ogden, leader of the "New Age" cult, Home of Truth. Again, a display of her possessions are at the Welcome Center, and if you ask one of the Community Ambassadors nicely, they might just tell you where you can view her garden cabins along Route 491. Of course you can always travel up to Route 211 to see the remnants of the community she once held reign over. 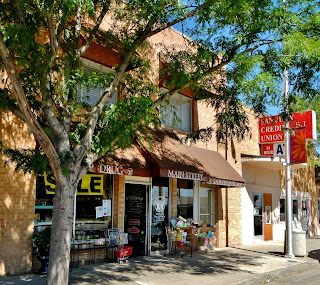 The San Juan Credit Union is the former location of the movie theatre; the rooms over the San Juan Pharmacy were used for storage for the theatre.  Monticello was making headlines all over the United States when an armed gunman was noticed in the upper window.  A young police officer, Kent Adair (Monticello's long time Chief of Police) deftly disarmed the culprit with an expert karate chop.  Only to find out he had knocked off the arm of "Rambo", a large cardboard display of Sylvester Stallone; Kent's call in to other officers..."The suspect has been disarmed."  See, small towns do have national drama, occasionally. 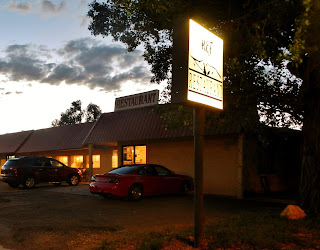 Swinging up and around to Center Street, the R&F Restaurant is the location of the former Lariat Café.  Tragedy stuck when fumes from a propane hot water heater, in a rear rental room, ignited.  The cook in the kitchen had just opened the oven, the fumes came into contact with the interior flame and BOOM!  The café exploded and many patrons were injured or killed; a very sad day for Monticello indeed.   Sitting in the R&F as the dusk slowly settles into darkness; a brush of an invisible hand across your own; could that have been one of the patrons who lost their life that fateful day. 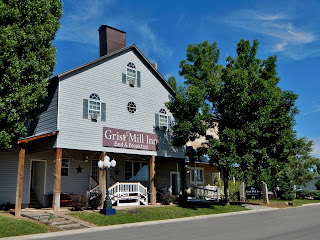 Making the turn onto 300 East, the Grist Mill Inn is now a quaint Bed and Breakfast; but it has a ghostly resident.  Back when it was a working grist mill, a boy scout troop was taking a tour; again tragedy struck when young Rhett Phillip Palmer fell into the elevator shaft and was killed.  It is said that you can see a young boy playing ball where the elevator was located; be kind and say hello with a smile.

Canyonlands Foreign Auto Body is next door to the mill; wave at the ghost of Gene Shafer...he is waving at you. 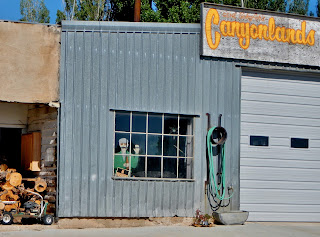 The Hammond Family home (Captain Francis Hammond fame), then owned by the Redds, is the brightly painted barn like building.  A "lady in white" has been seen standing at the foot of the bed on occasion. 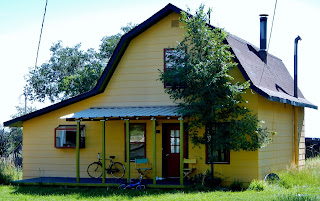 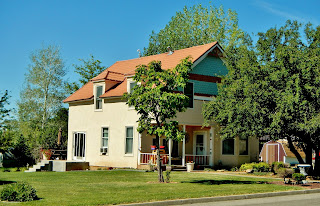 Last, but definitely not least, is the Nephi Bailey (Monticello's first shoemaker) home; remodeled a bit, but you can still see most of the original architecture.  No ghostly stories, but it is an old and unique building for the town.

Monticello's Ghost Tour is full of stories; historical, fantastical and perhaps a pull of the leg here and there.  Wow, this may become so famous, you might have to reserve a seat on a hay bale three months in advance!