Back on August 5, 2013, I wrote about how we found the Grand Canyon by accident; flipped a coin and visited the South Rim.  Well this is another of those "on the way to" stories; Route 89 to Route 89A which is the way to the North Rim of the Grand Canyon.

Might as well give you a warning now, Route 89 to Page is closed down at the junction of 89/89A due to a landslide that occurred back in 2013.  At "The Gap", you'll need to detour onto Route 20 which is a non-maintained road if you are up in this area; otherwise travel down Route 160 and pick up Route 98 which goes directly to Page and is well maintained. 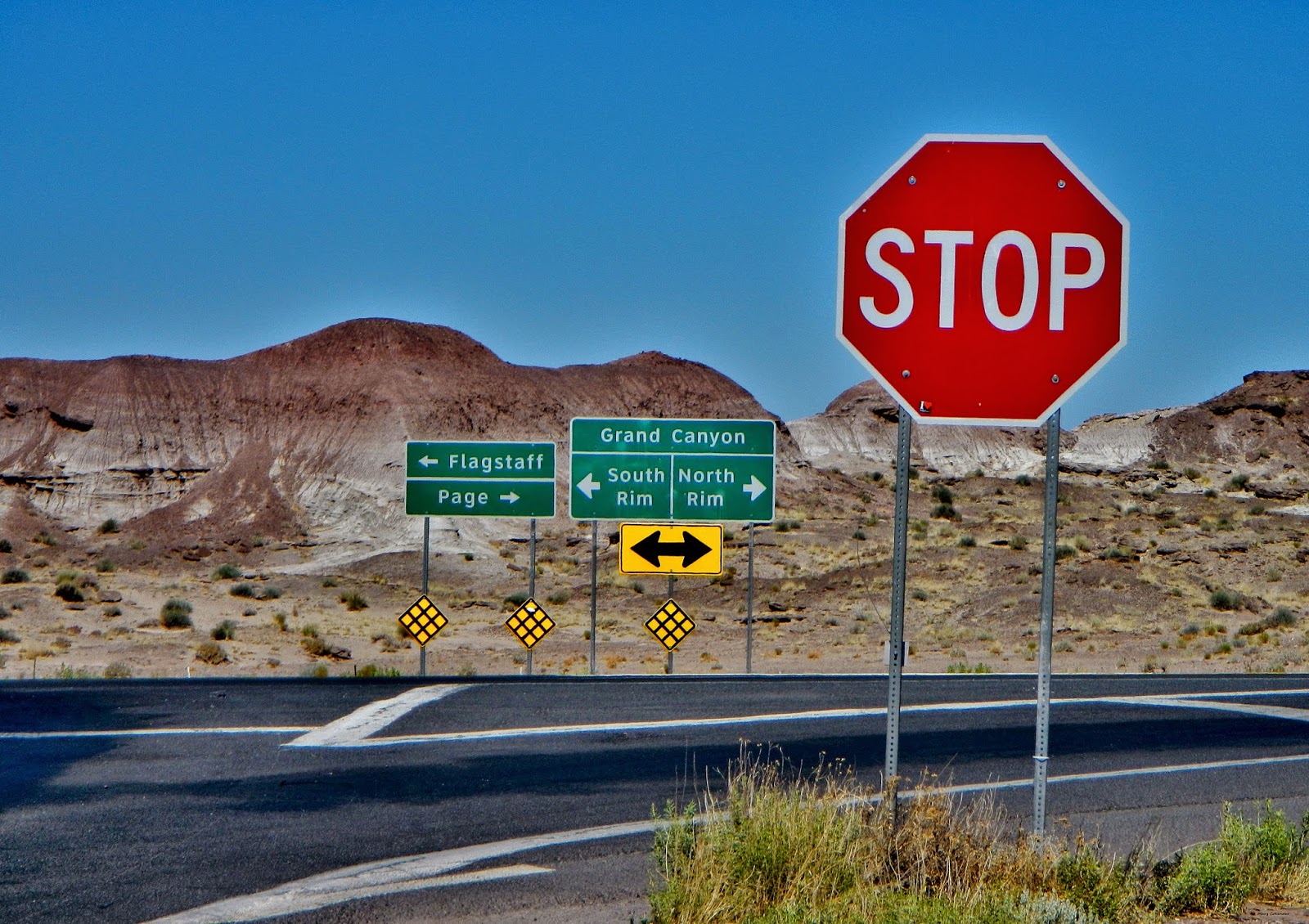 Now back to our personal adventure which starts at the junction of Routes 160 and 89; this time we're making the right towards the North Rim.  This is the northern end of the Painted Desert as you can see by the multicolored layers of the adobe hills.

The Arizona landscape is "outer worldly" with unusual formations and colorings artistically created by Mother Nature.  The Echo Cliffs run along the east and west sides of Route 89.; named by John Wesley Powell in 1895; he was a former US soldier of the Civil War, geologist and explorer of the Southwest.  "The echoes were so remarkable, we could call it nothing but Echo Peak", but the entire line of cliffs was eventually renamed the "Echo Cliffs". 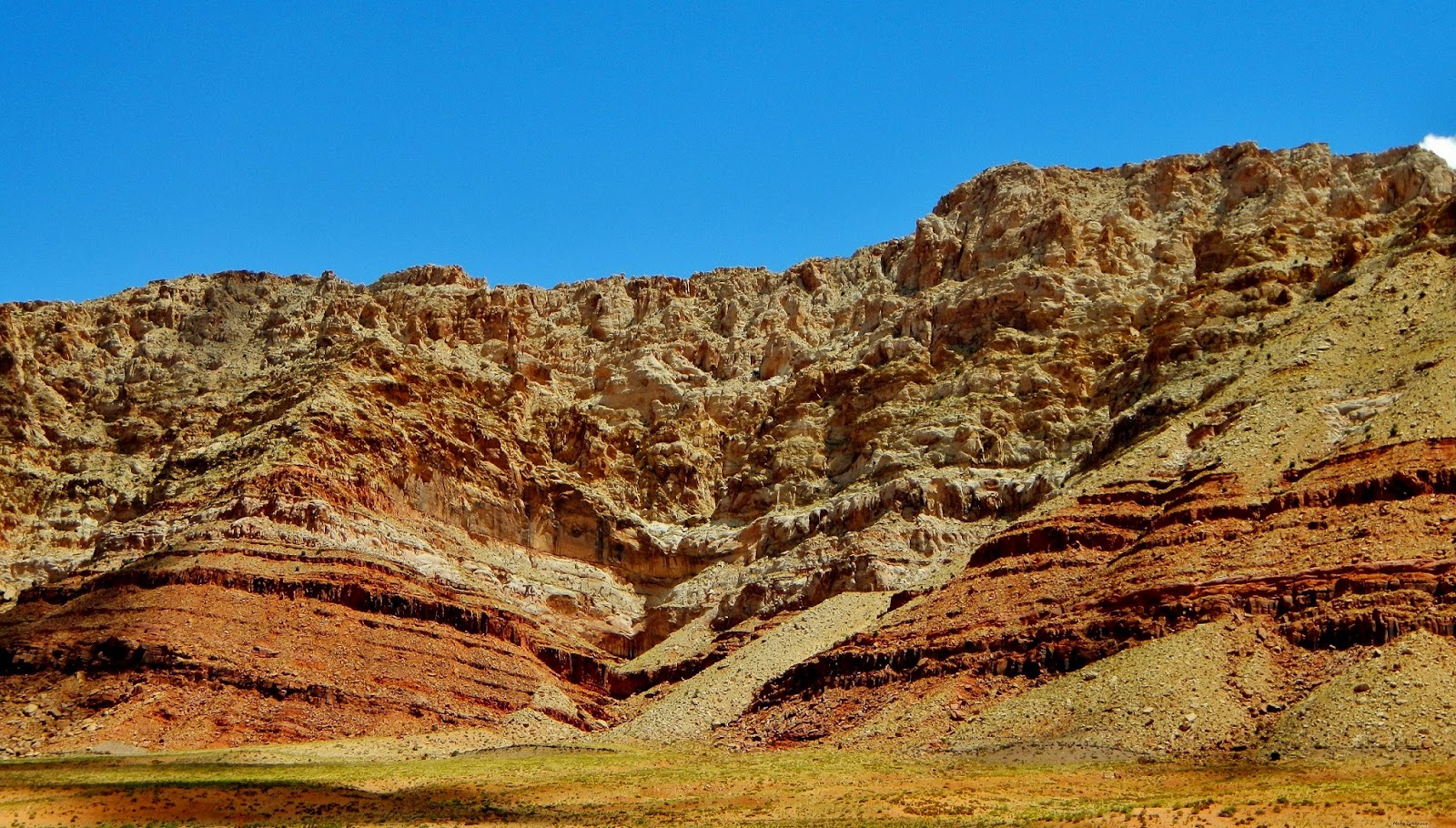 At the junction of Route 89 and 89A, you'll be making a left and the Vermilion Cliffs will be seen immediately; the sunlight upon them truly brings out the pink/red hues of the stone.

Along this Route is Lees Ferry which gives access to Page across Lake Powell by, what else, ferry.  Interesting history on the naming of this place; John D. Lee, along with his 17 wives (talk about being big on polygamy!) settled in the area in 1870 and opened up the ferry in 1871.  John D. Lee was in exile for his role in the massacre of 120 emigrants near St. George, Utah, at a place called Mountain Meadows (for which he was later executed).   So here's my problem, why in the world keep the ferry named after a mass murderer?  In my humble opinion, it's akin to rewarding him for the deed, even though he was finally executed for his crime. 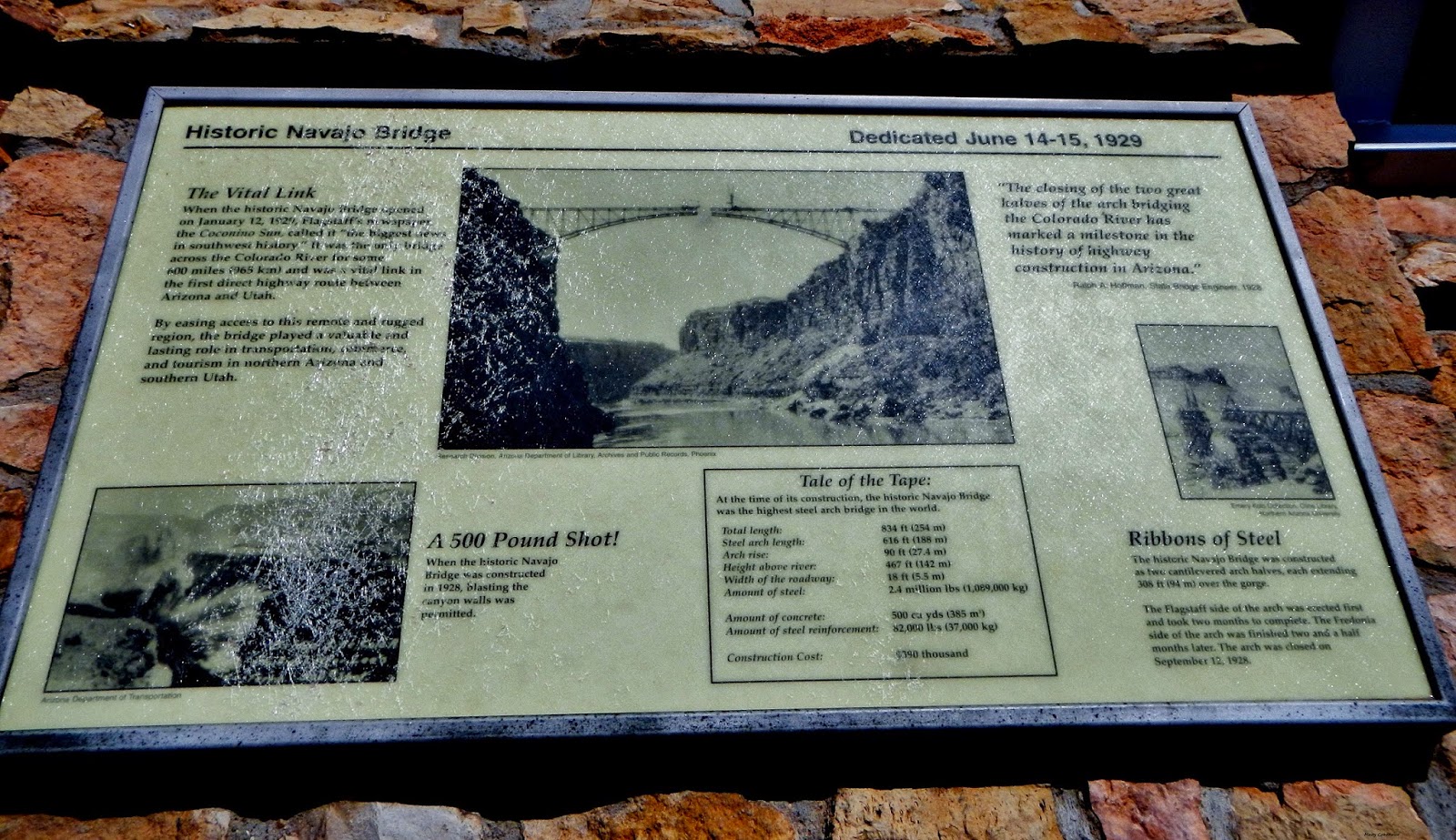 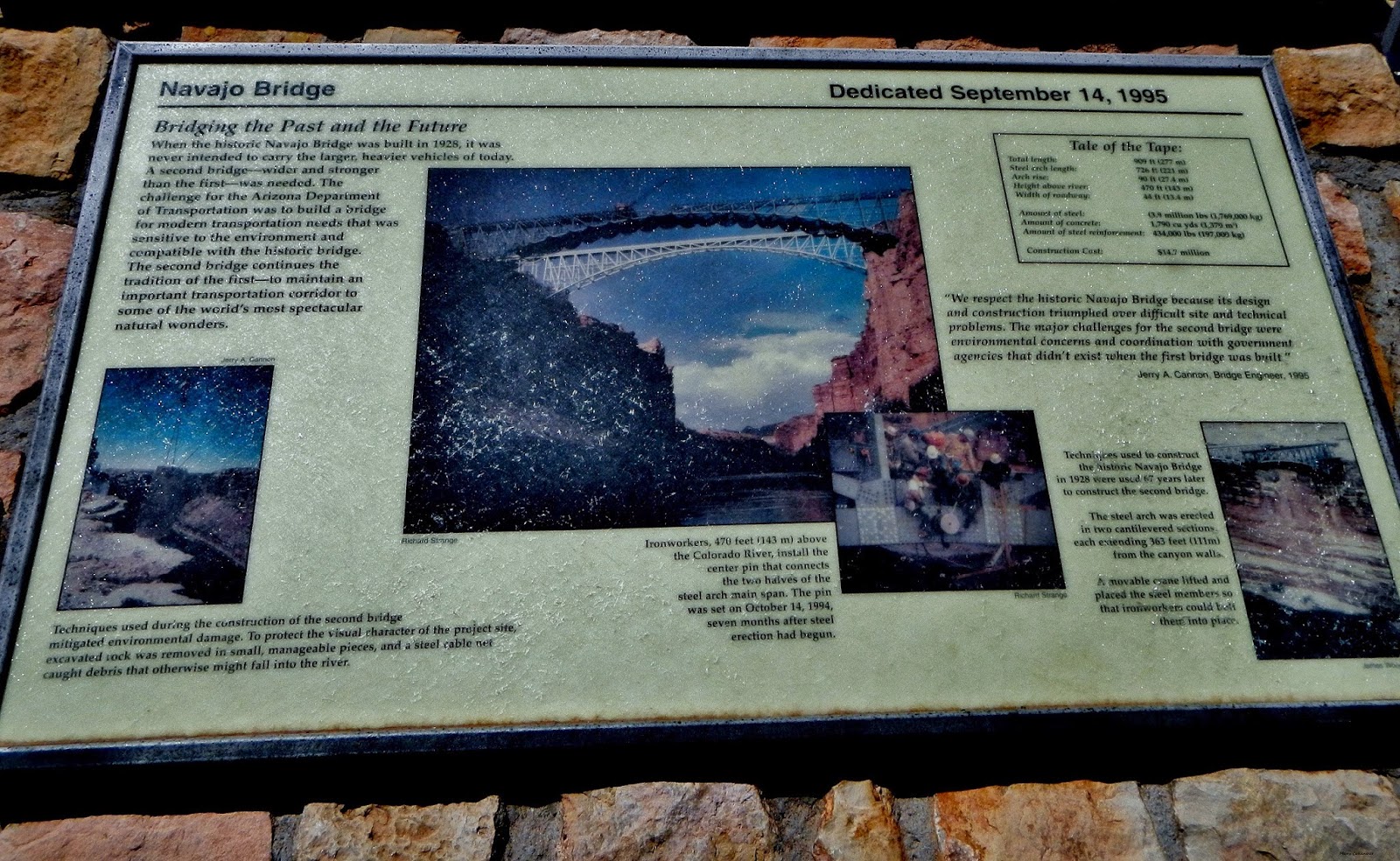 Anyway, a must stop-at site along the way is Navajo Bridge; in 1929 this was the highest steel arch bridge in the world and spanned the Colorado River.  In 1995, another bridge was built to accommodate the increase in traffic; the original bridge still stands and is in use for pedestrians to walk across.  Not only do you get spectacular views of the river below, but the landscape beyond; and there are condors!  That's right, condors inhabit the rock ledges on both sides of the bridge and a couple came out to visit with us.  There is a Visitor Center, restrooms, picnic area and museum at Navajo Bridge; a good place to rest up and simply take in the scenery. 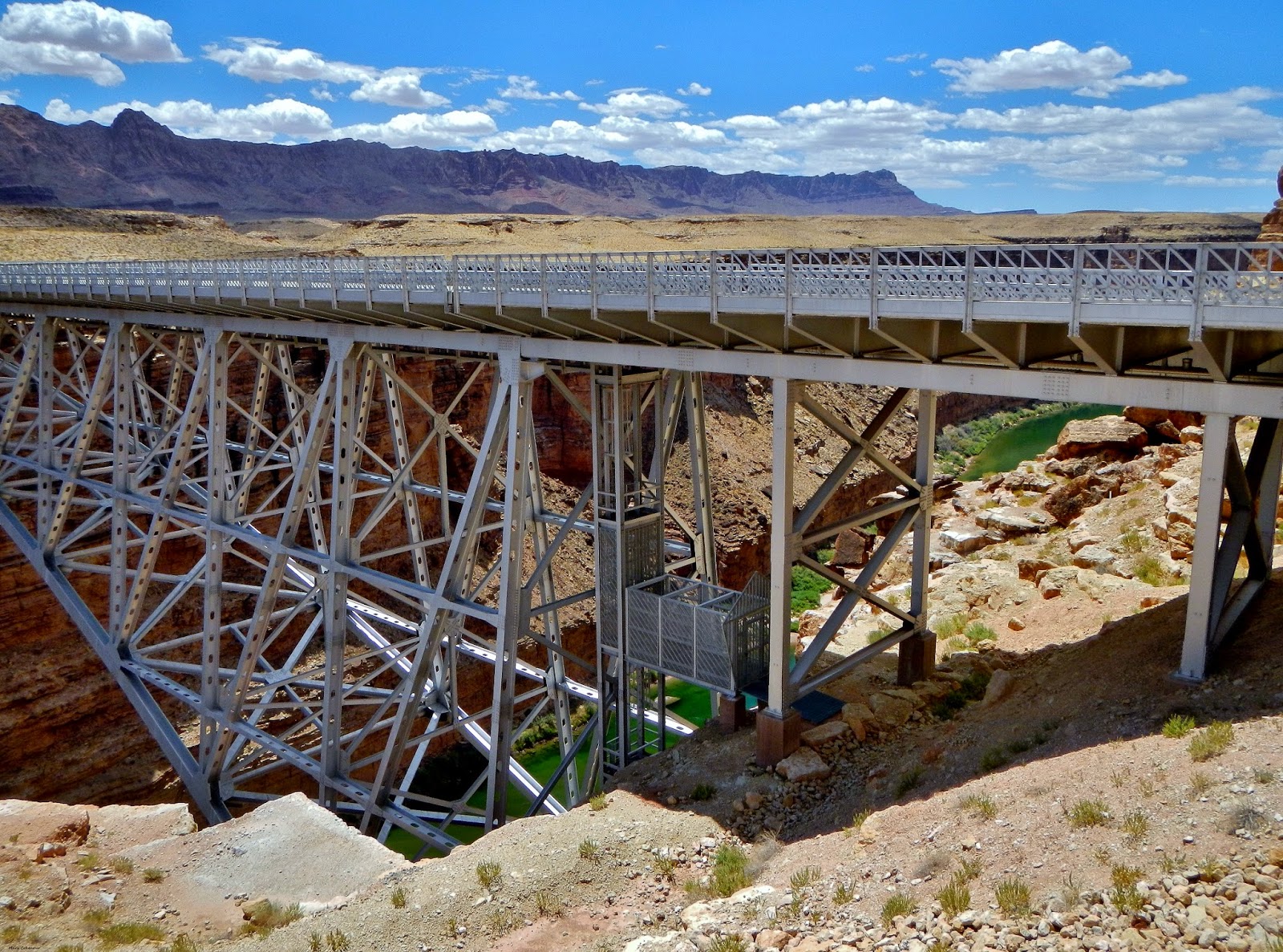 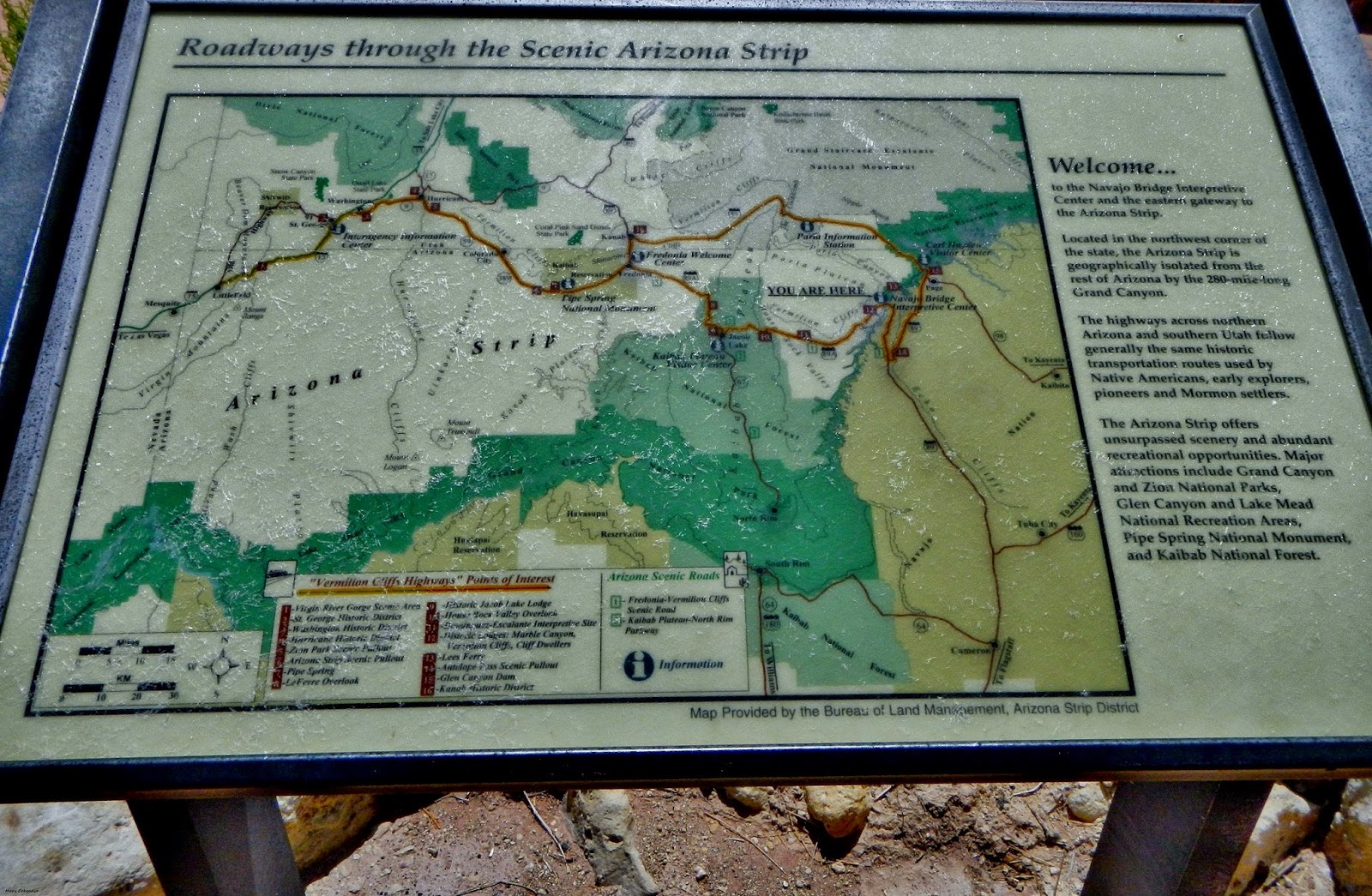 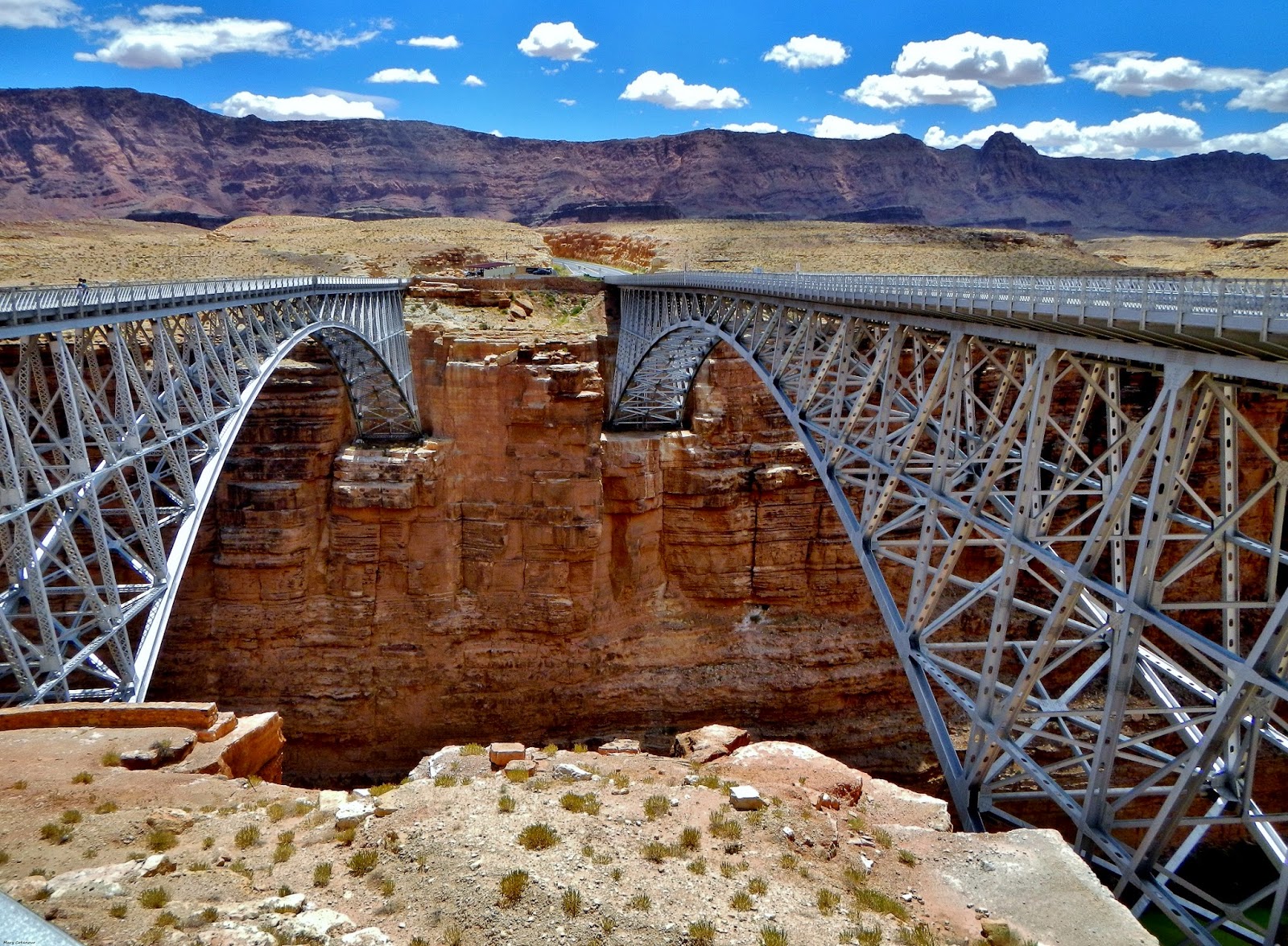 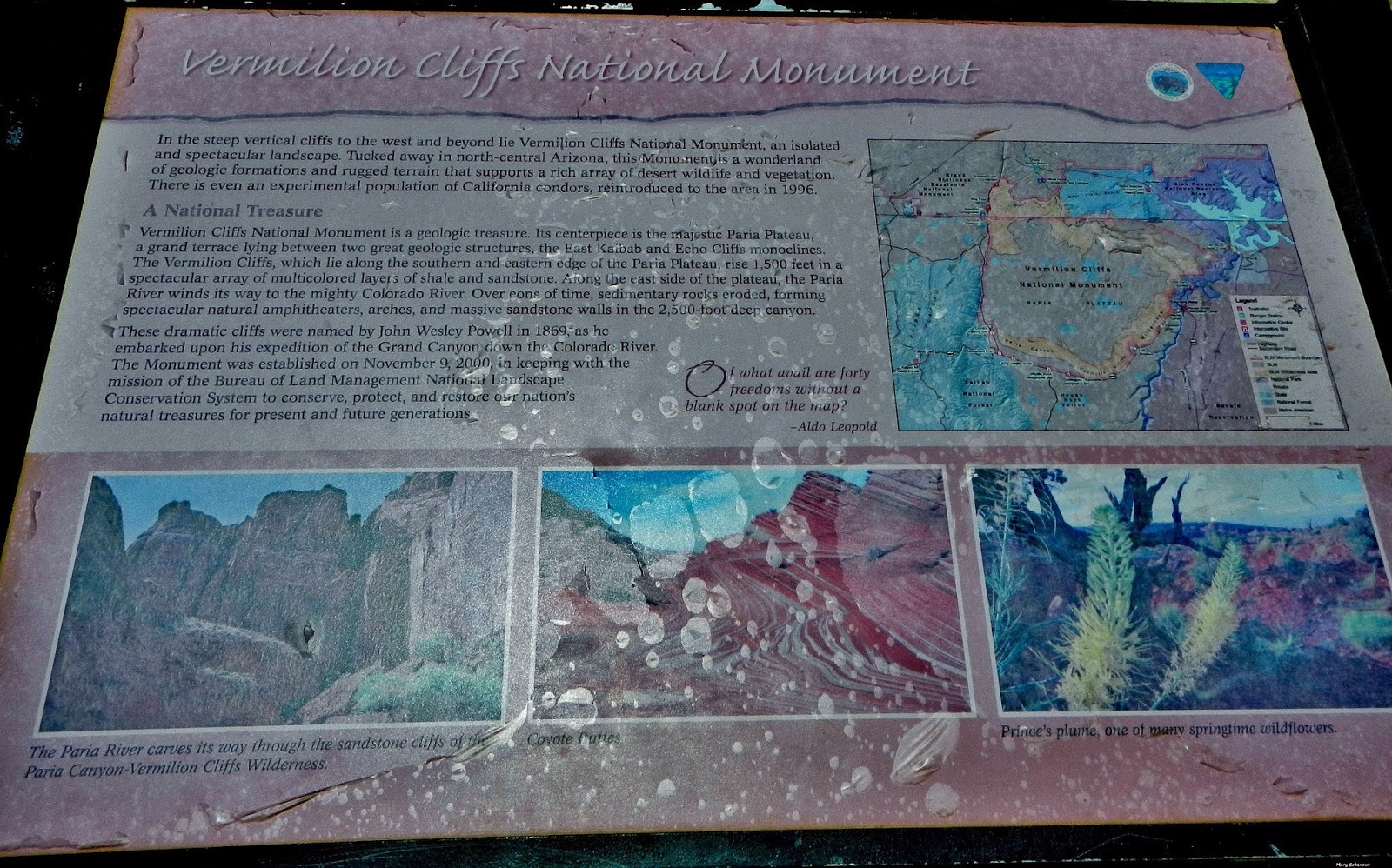 We passed several, I wouldn't even call them towns, places that were composed of a motel and restaurant (Lees Ferry, Marble Canyon, Vermilion Cliffs), but our stomachs weren't growling yet, and I had packed a good sampling of healthy snacks, water and other drinks for our trip.  We did stop for a photo op at "Cliff Dwellers" which had some unique rock formations and stone building.  There was a vendor there selling crafts, but not of Native American origin. 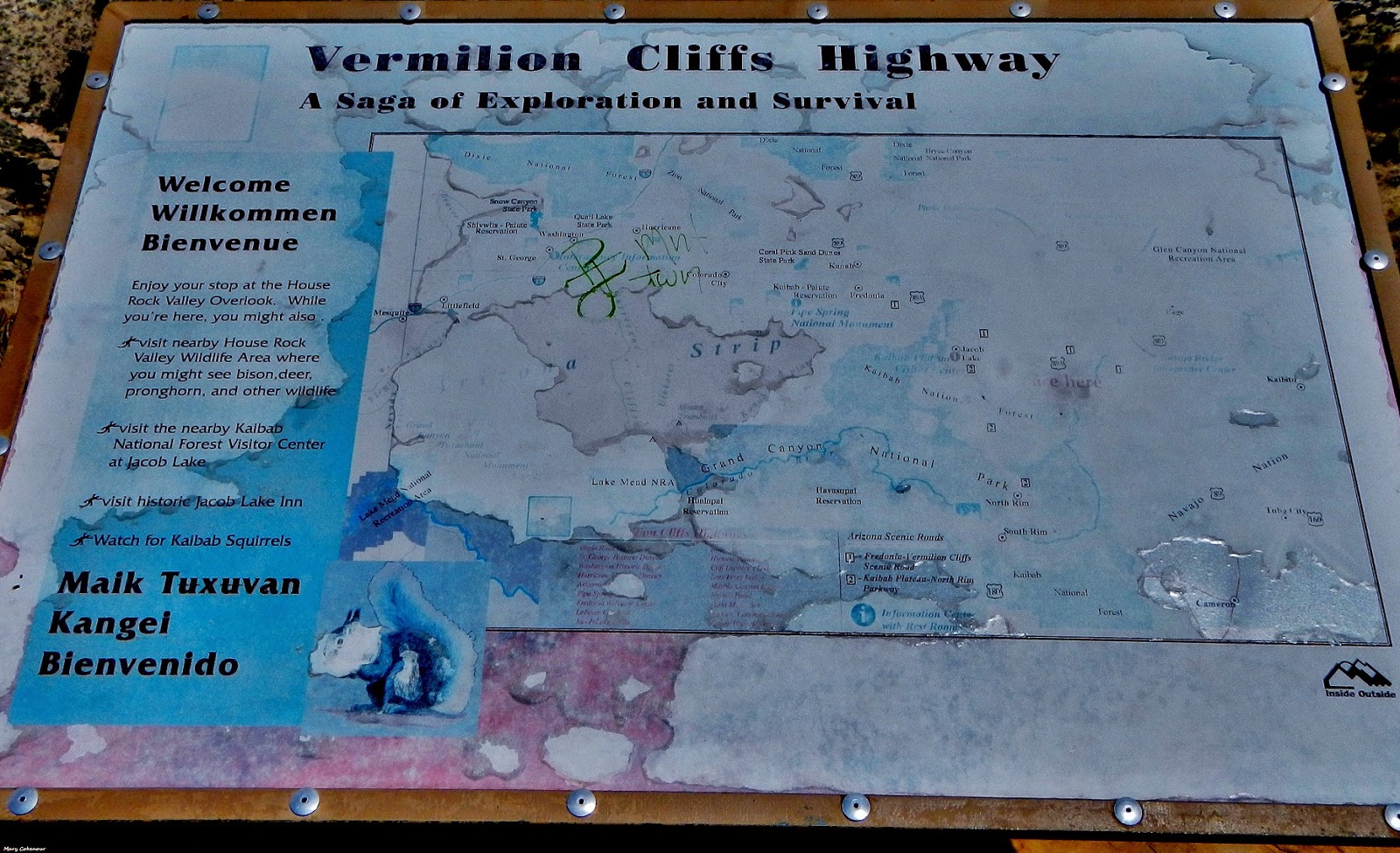 To get to the Grand Canyon North Rim, going through the Kaibab National Forest is a must; the road begins a climb about 15 miles from House Rock and there is an overlook about halfway up the hill...STOP and look over where you just came from.


How to describe the Kaibab National Forest?  Let me walk you through it with photos... 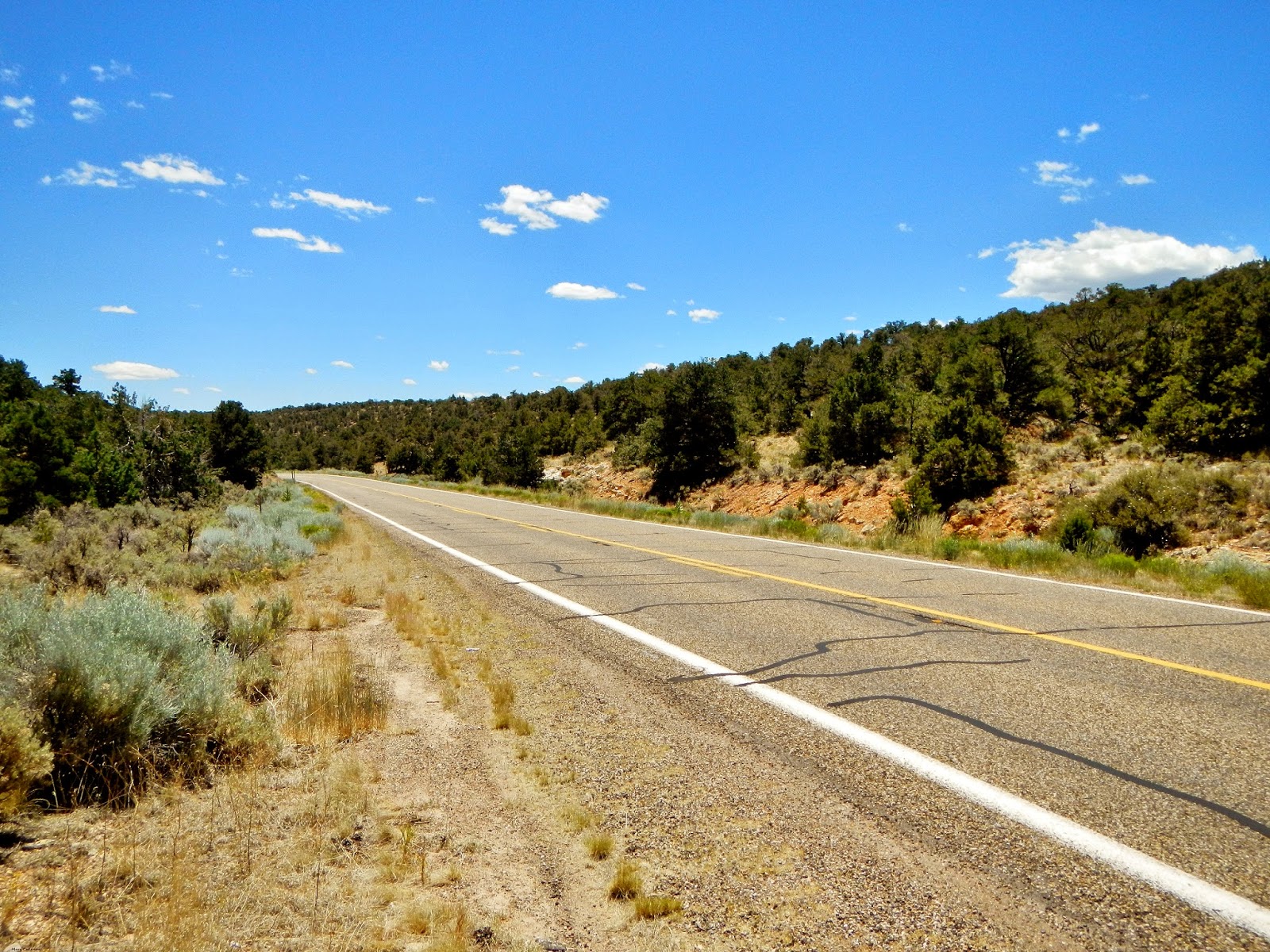 As we first enter, it is more aptly named, "Kaibab National Shrubbery"; remember that you're just exiting the desert, so there is still very little water to feed full grown trees. 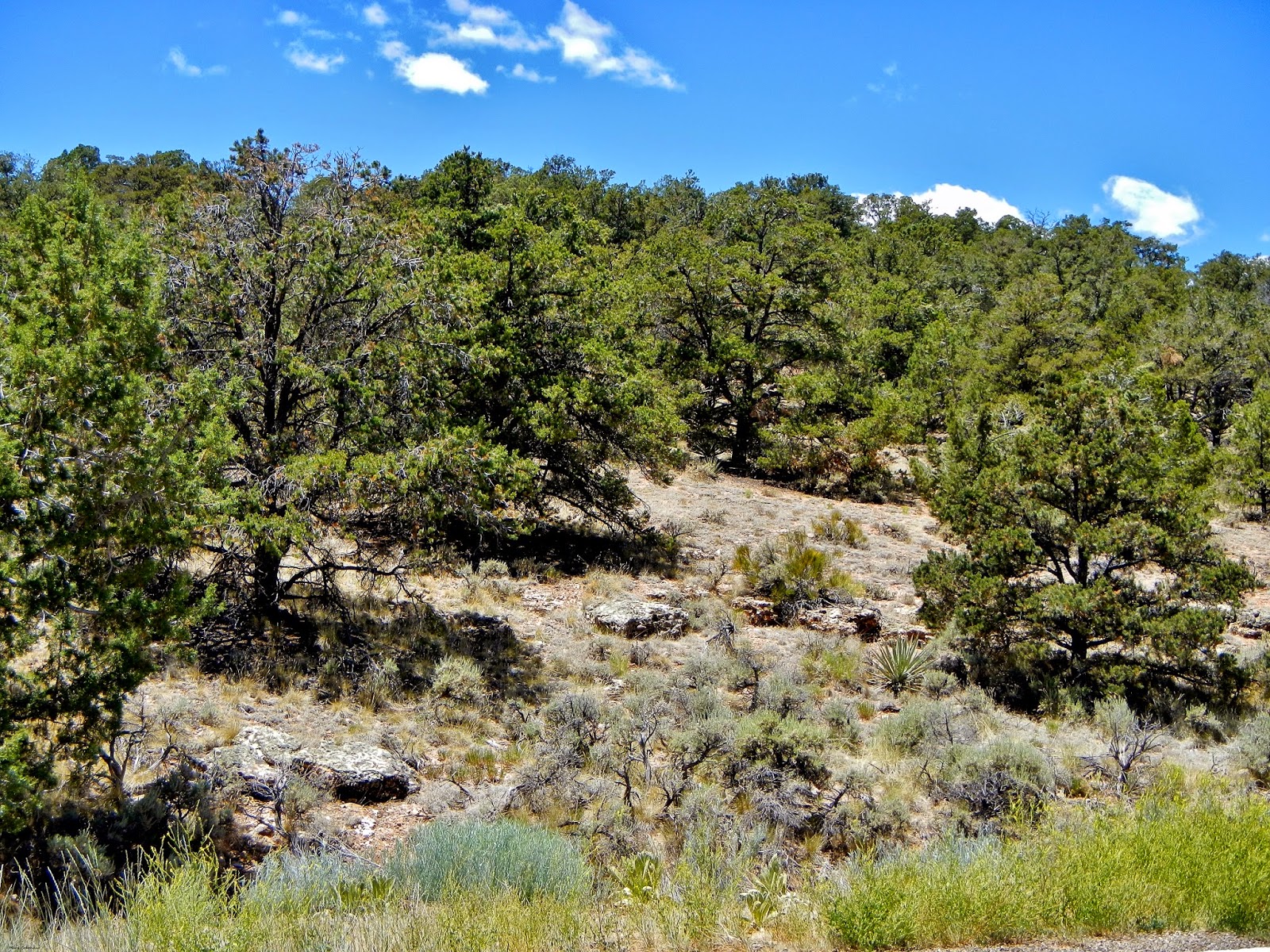 A few miles through and it become "Kaibab National Larger and Denser Shrubbery". 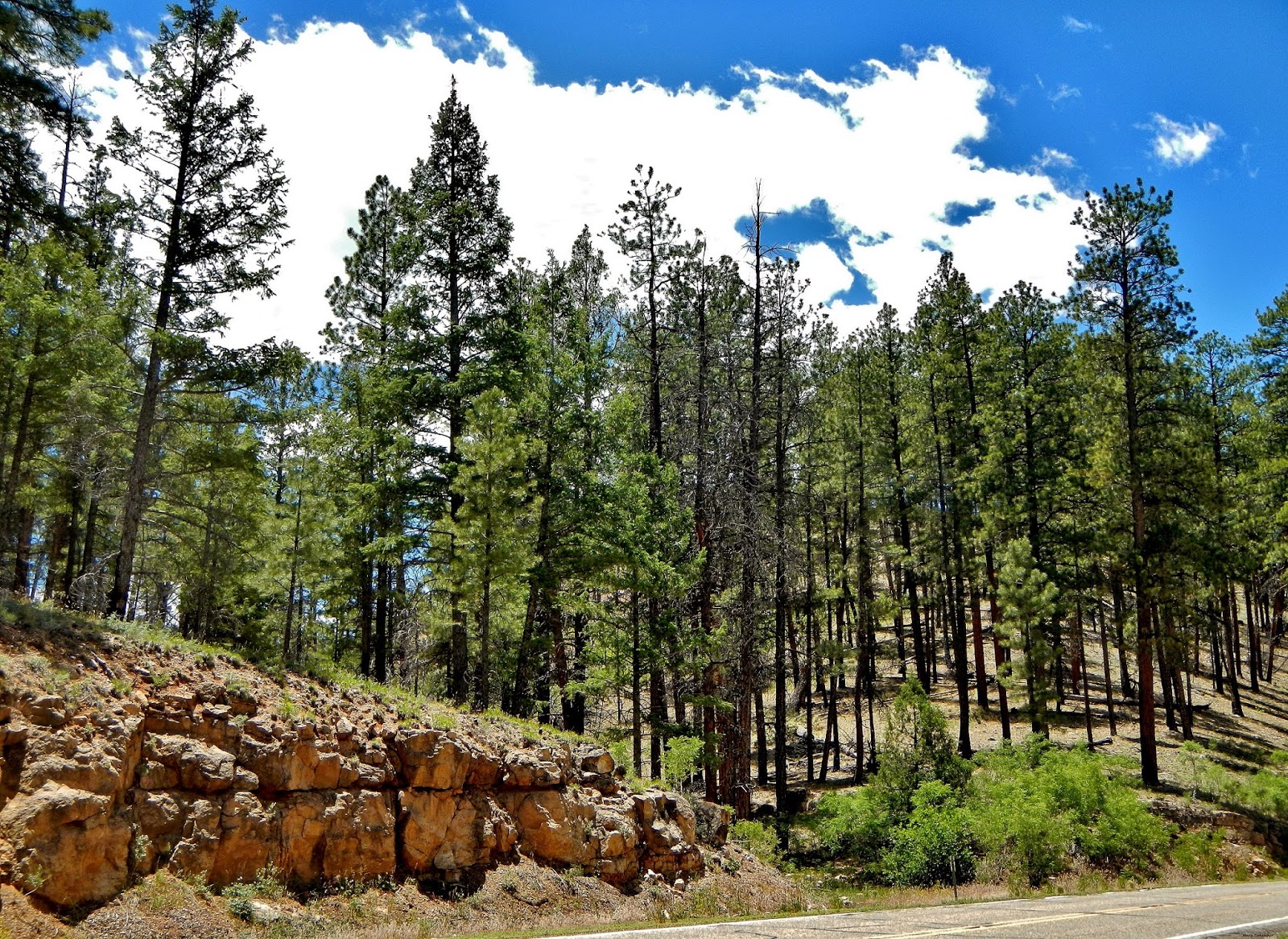 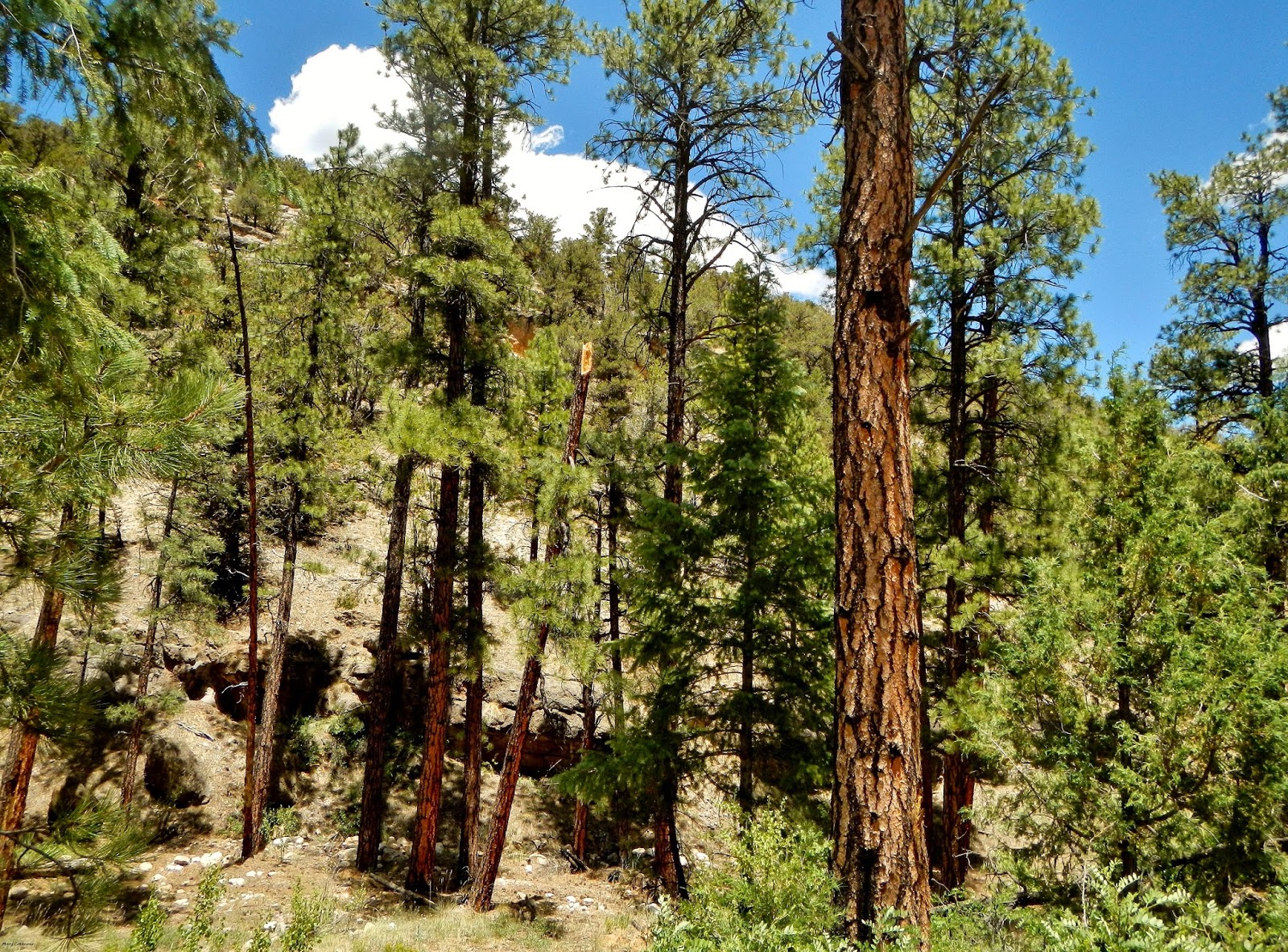 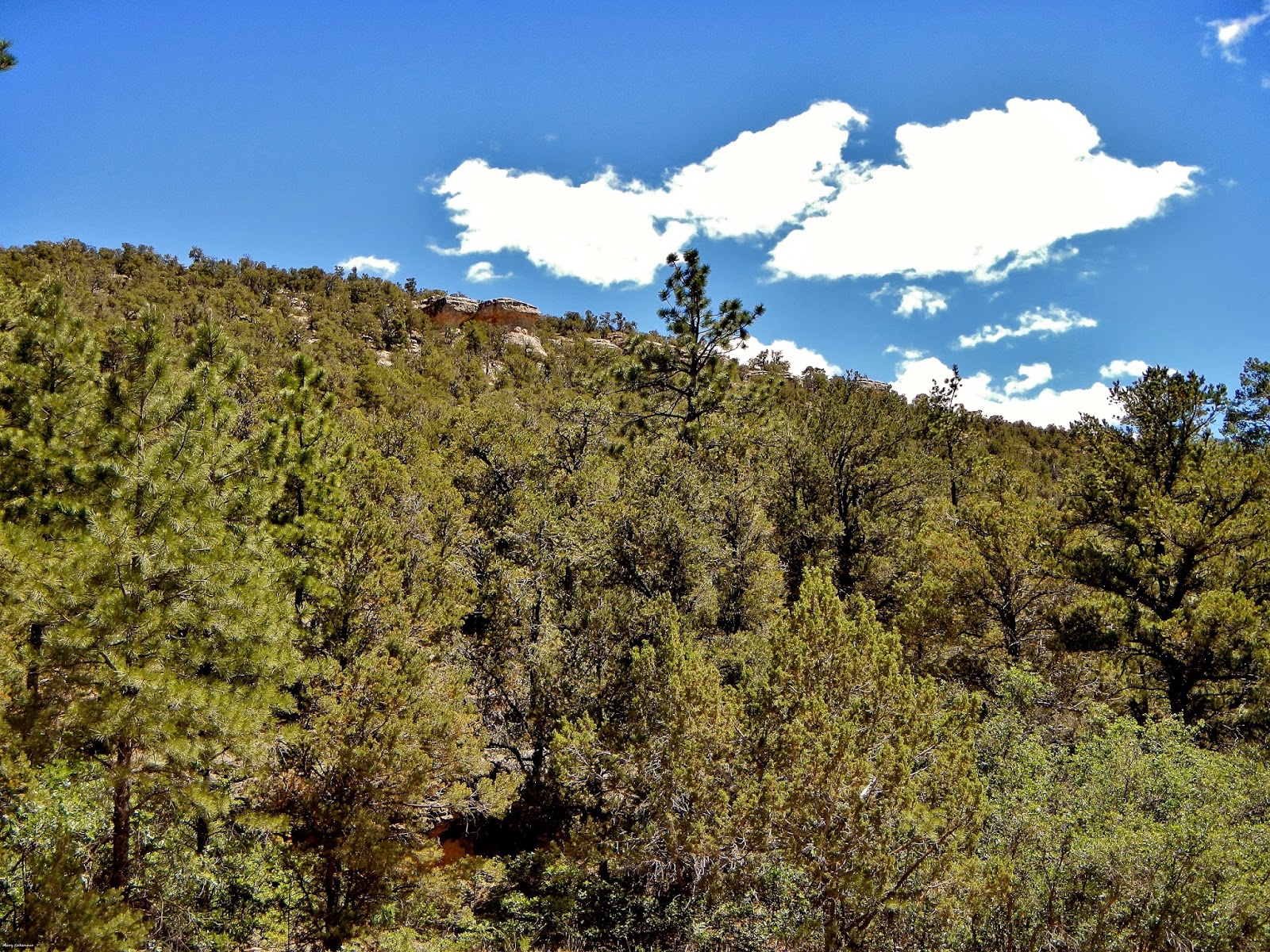 Finally it becomes, "Wow, so this is Kaibab National Forest" 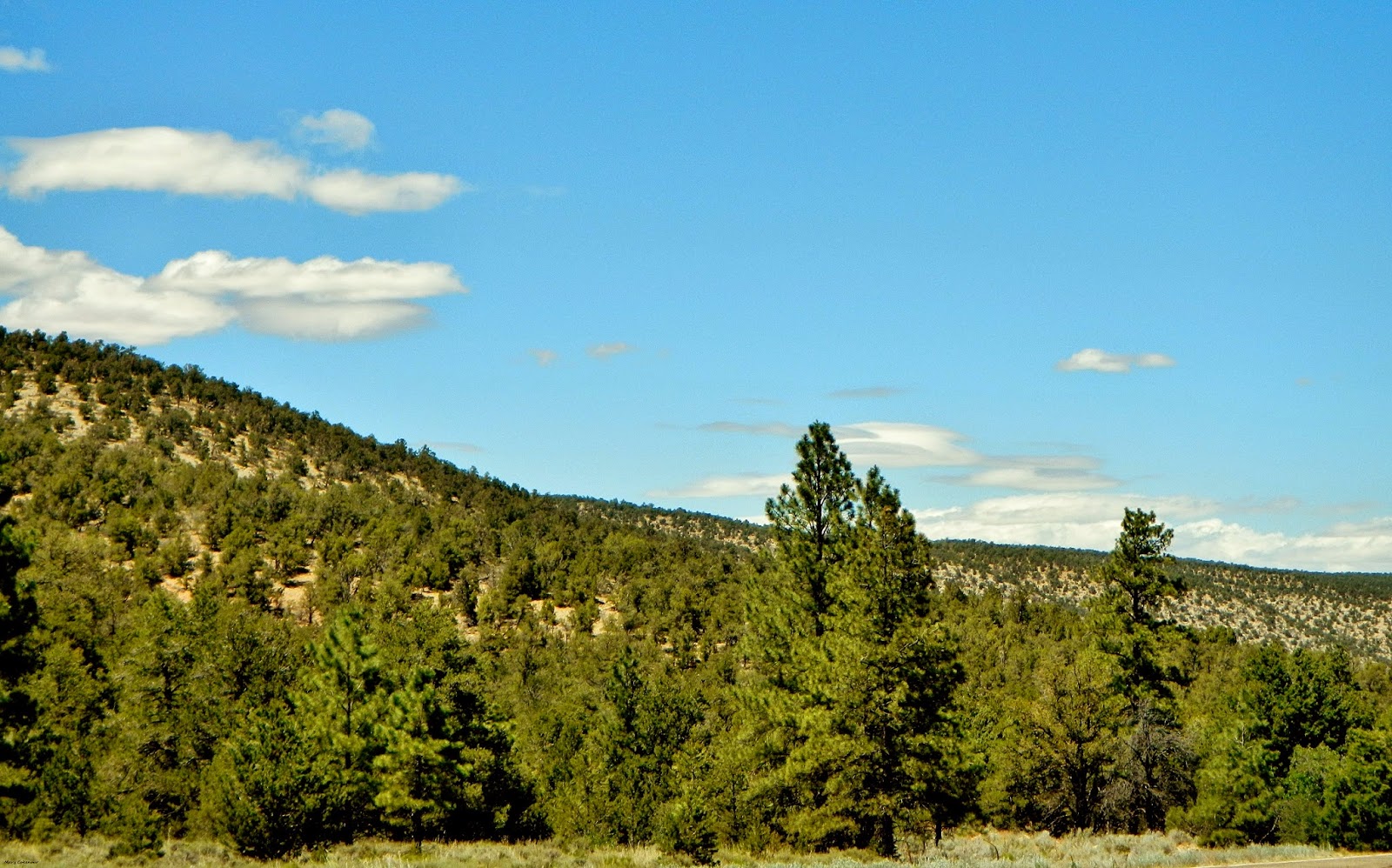 At one picnic area, we did see a bear strolling through; but keeping up with the flow of traffic prevented any pulling over and photo taking.  We'd been on this trip for six hours and were hoping to come across a restaurant soon.  As luck would have it, Jacob Lake Inn came into view.  I did a review of it on my food blog, so click on the name and you can read about the restaurant and bakery. 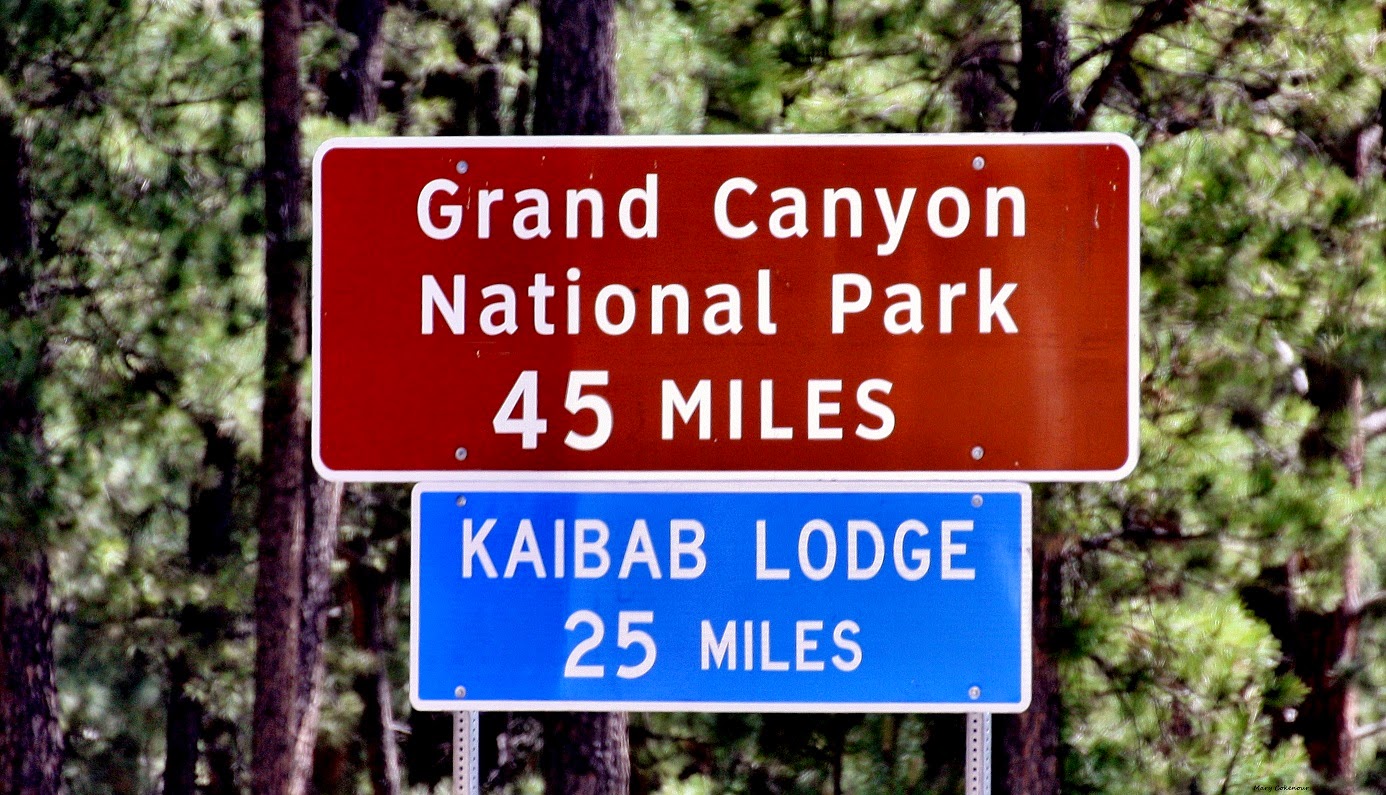 At Jacob Lake, turn onto Route 67 and the North Rim will be reached in another hour.  So did we make it to the North Rim?  Well that's a whole other story, isn't it?