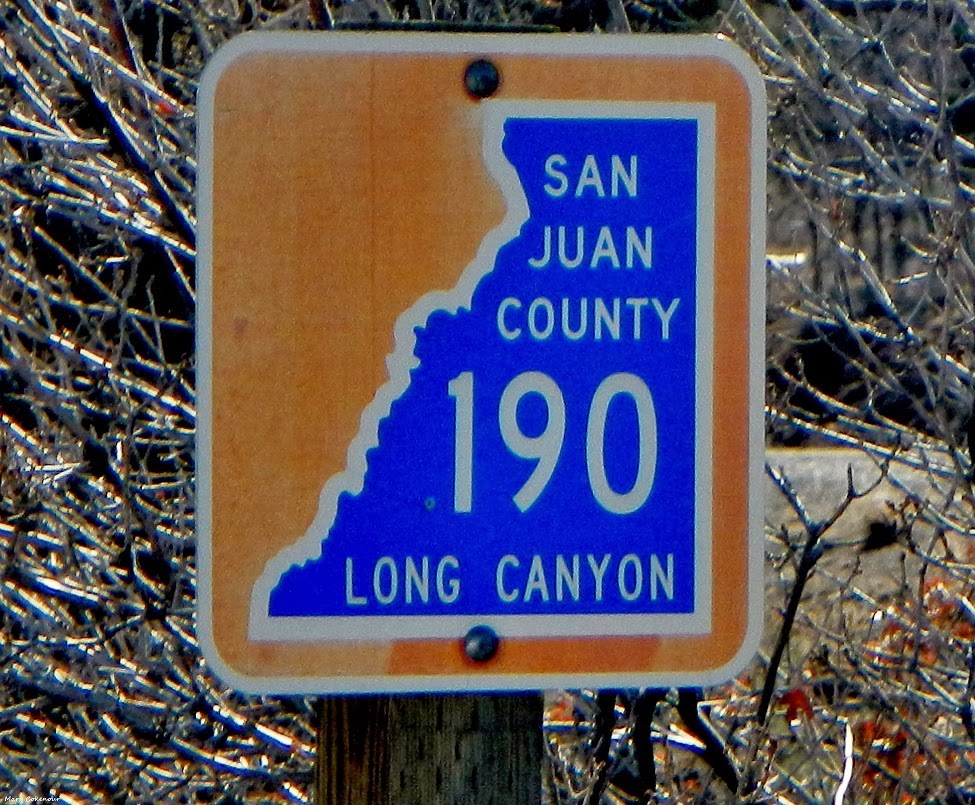 Actually, the title should be, "Long Canyon Road, or How Did We Not Die?" and you will understand this as the story gets closer and closer to Montezuma Canyon.  10.5 miles from the intersection of Main and Center Streets of Monticello, Utah; just 1.5 miles north of Devil's Canyon Campground, is Long Canyon Road - CR 190.  Looking at the map, you can see how it begins as a graded dirt road (follow the immediate split to the left), but that is only for the first 10 miles; Long Canyon Ranch is at the end of those 10 miles, so you either have to go back the way you came, or continue to the right up an inclining dirt trail...that's where the adrenaline pumping fun will truly begin.  When I say dirt trail, I mean hold onto anything you can, it's only going to get bumpier from here on...shall we? 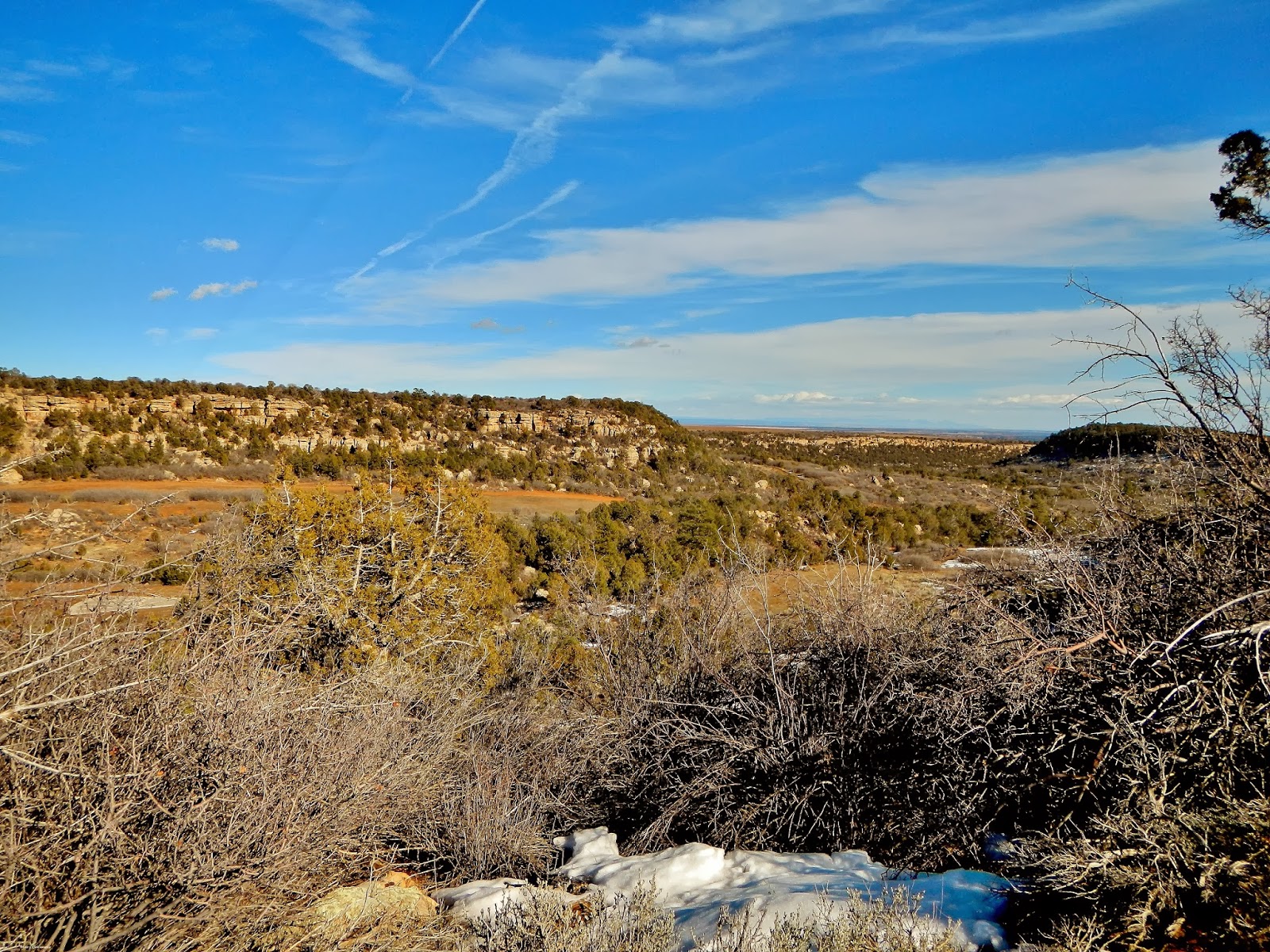 So, the first 10 miles is full of short roads, with cute names, leading to private homes; nothing impressive scenery wise except when you finally get a glimpse of Long Canyon Point.  When we reached Long Canyon Ranch, we pulled over to the side to decide if we should continue on or not.  While debating the issue, a red jeep like vehicle zoomed past us; "what the heck", we thought out loud, "if they can do it, so can we!" 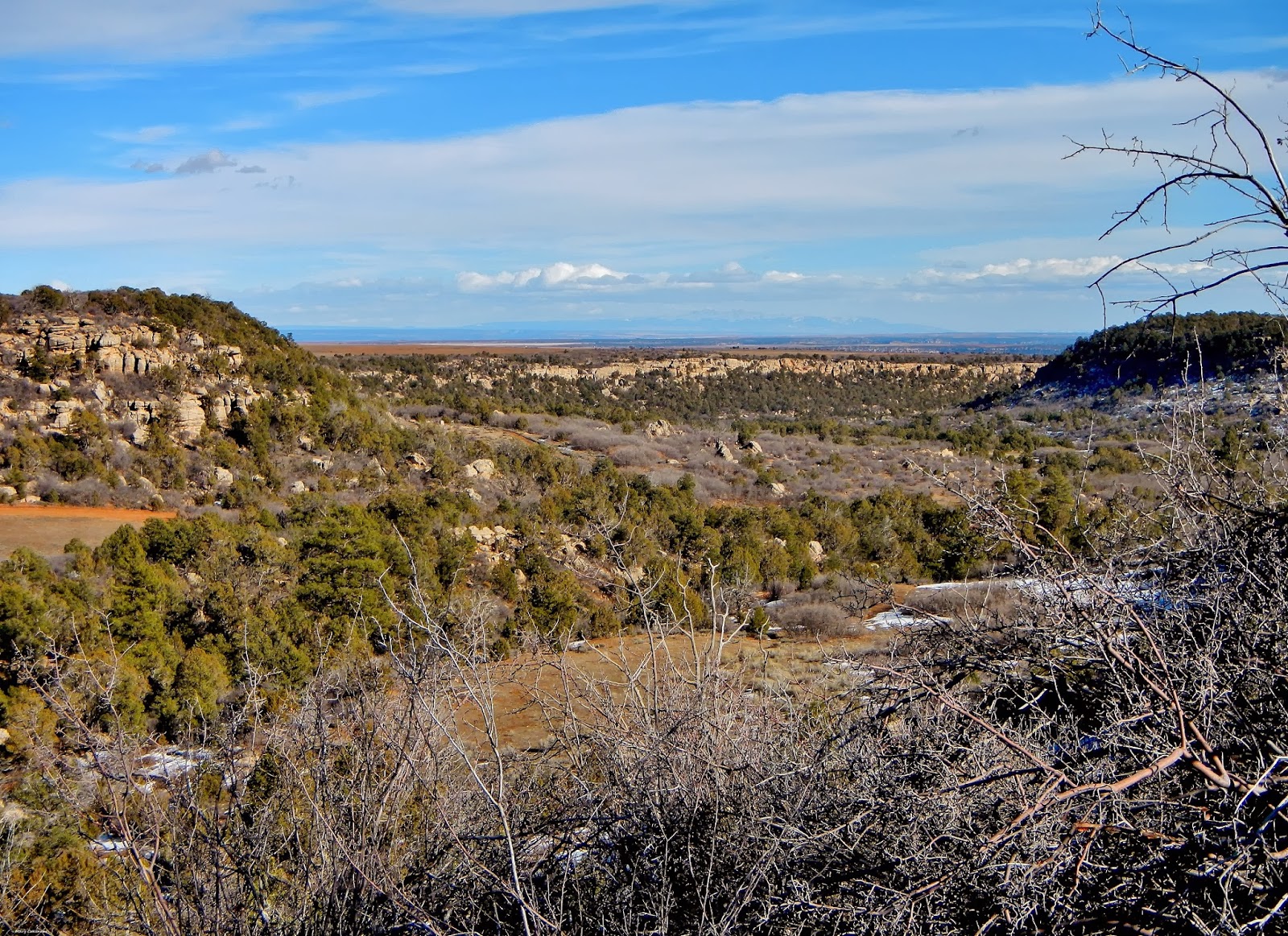 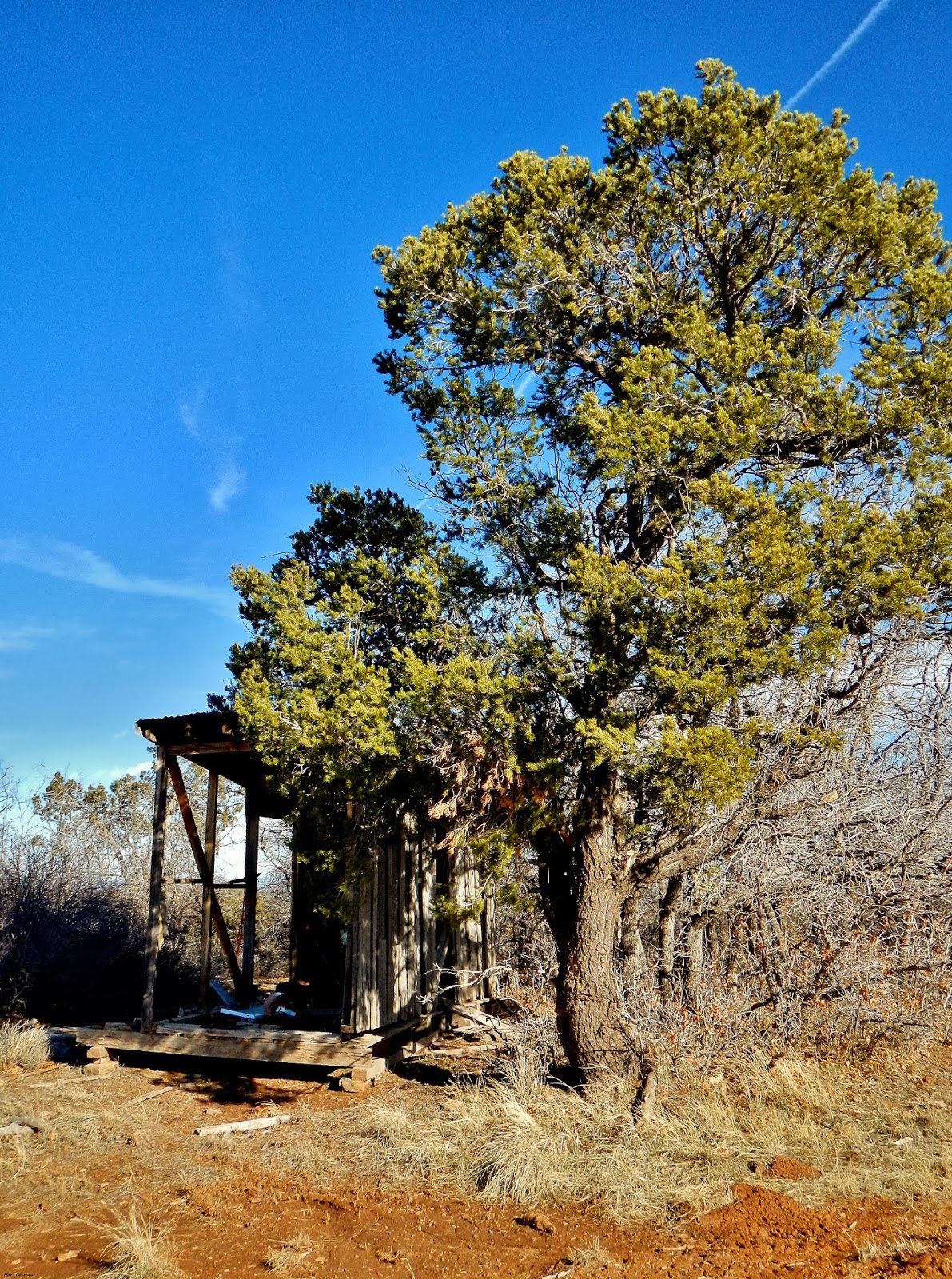 Up we went and the dirt road was no longer smooth, it was definitely unmaintained and had plenty of rocks embedded in it.  Fencing on either side stated no trespassing and after 6.5 miles we encountered this sign... 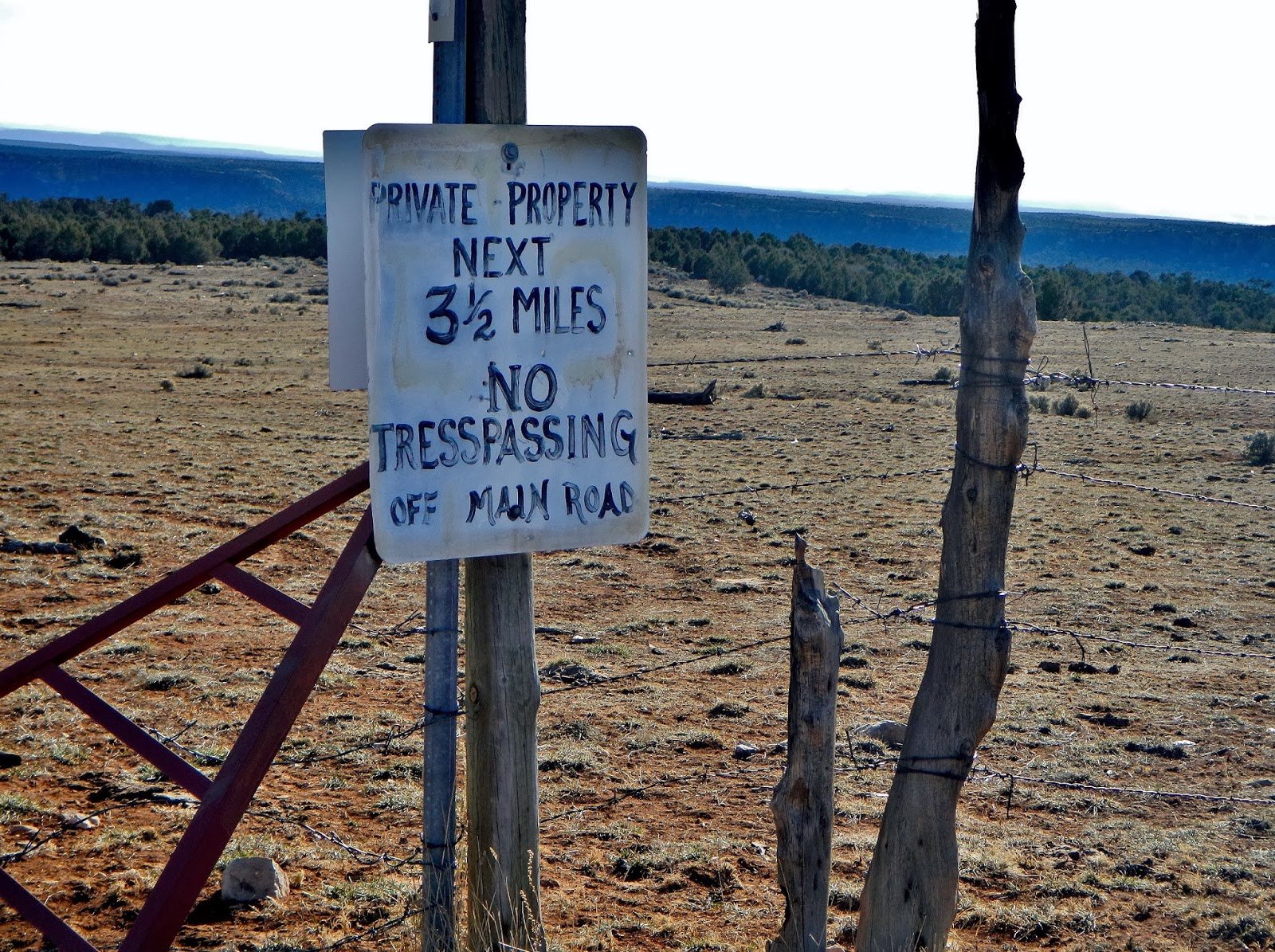 We also met up with the occupants of the other vehicle that had passed us, Star and Werner (or Warner - not sure of the spelling) Hall of Tennessee; We(a)rner is a photographer and originally from Florida.  They inquired if we knew where we were and laughed at my response of, "No clue, but we have maps!" and were happy to hear we were trying to get to Montezuma Canyon, as they were too.  So, Roy and I became the leaders of a two vehicle jeep safari across Long Canyon and a mesa which would eventually bring us down into Montezuma Canyon.  We were glad for the company, as were the Halls, since the roads (if that is what they could be called) got worse and worse for the wear.  The 3.5 miles over the privately owned section of the main road was beyond horrid; dodging rocks, potholes that could destroy an axle with ease, unevenness that would make any sailor green with seasickness. 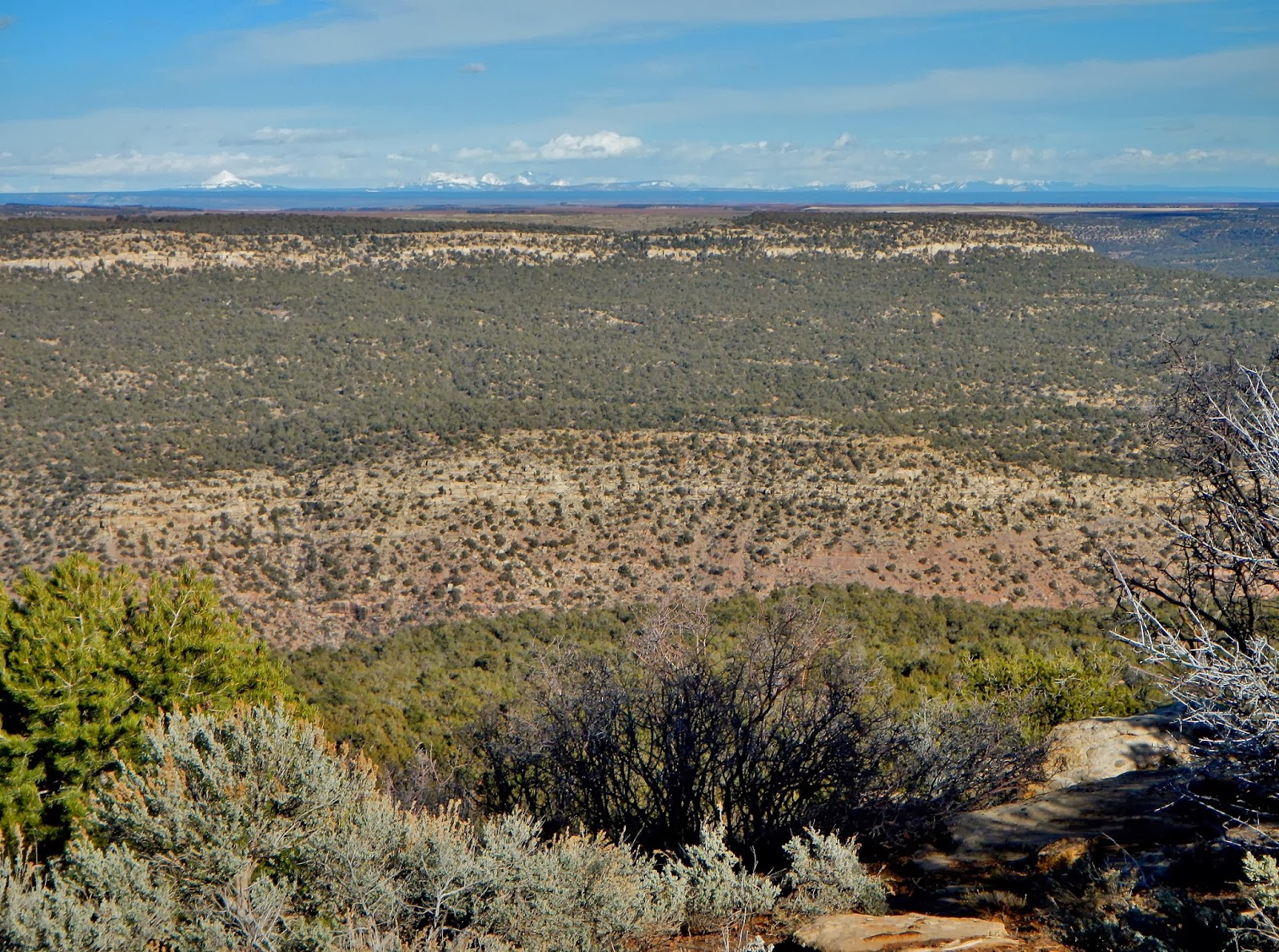 Even though the Halls were following, we kept stopping for photo opportunities for all of us, or to allow them to catch up to us.  We had no intention of having them get lost out here, or either of us be stranded if a vehicle had trouble; we'd all become a team at this point.  One of the stops was getting photos of Long Canyon. 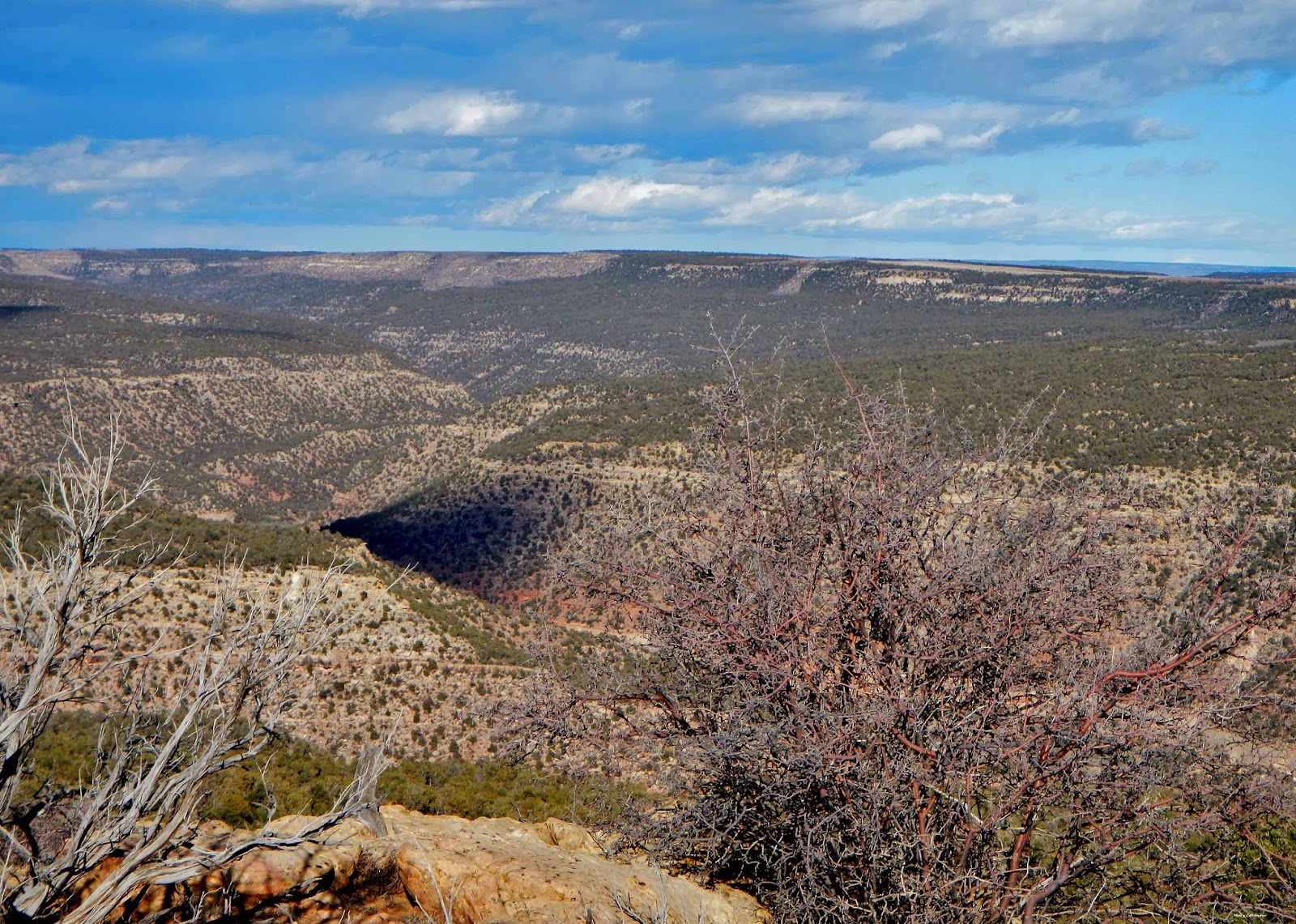 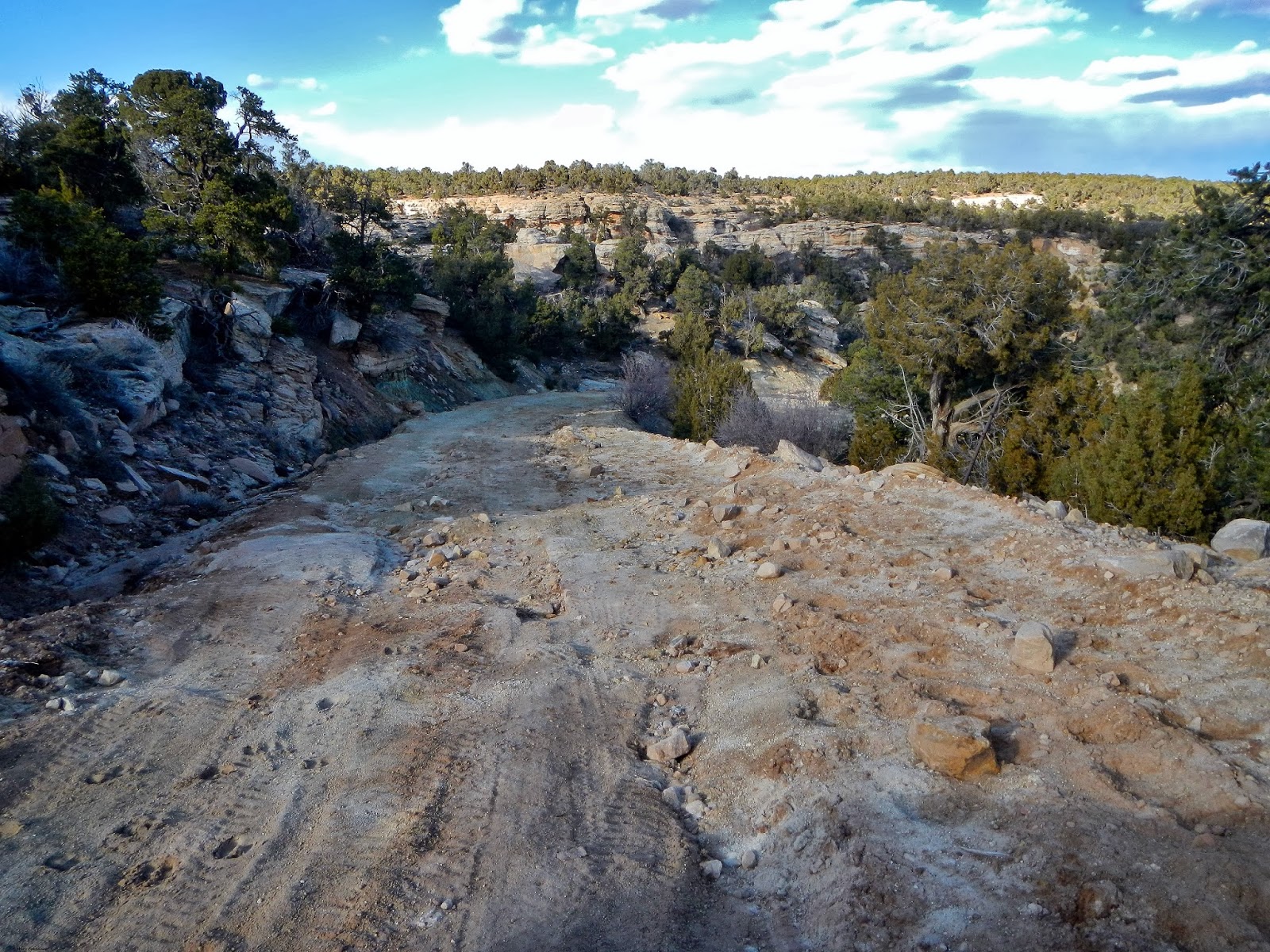 At the 20 mile point, we rounded a corner to be greeted by our first road of hellish delight; a narrow dirt, rock and pothole ridden trail winding downwards.  There was many a time when I would be saying, "Hunny, move over, no road on my side" and he would respond, "Not on my side either!"  We would have to perfectly drive dead center; the only other options were to either hit a deep hole and tip the vehicle into the hillside, or plummet down into the canyon below.  Oh, and then there were the times we drove at almost a totally vertical decline; oh joy...NOT! 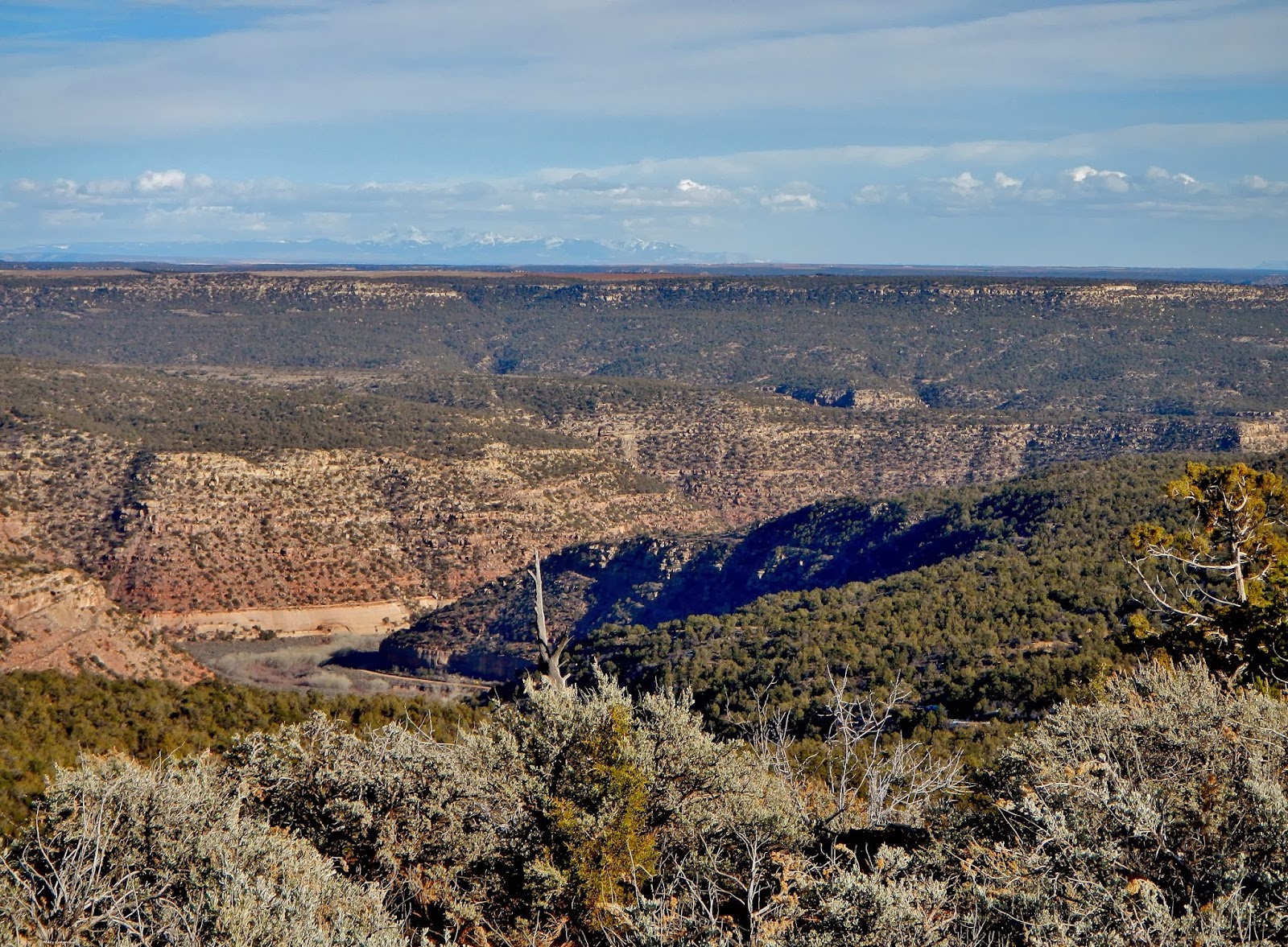 ...oh, but what is that we see ahead, the bottom and level ground of Montezuma Canyon, hurrah!!!  Yeah, about that... 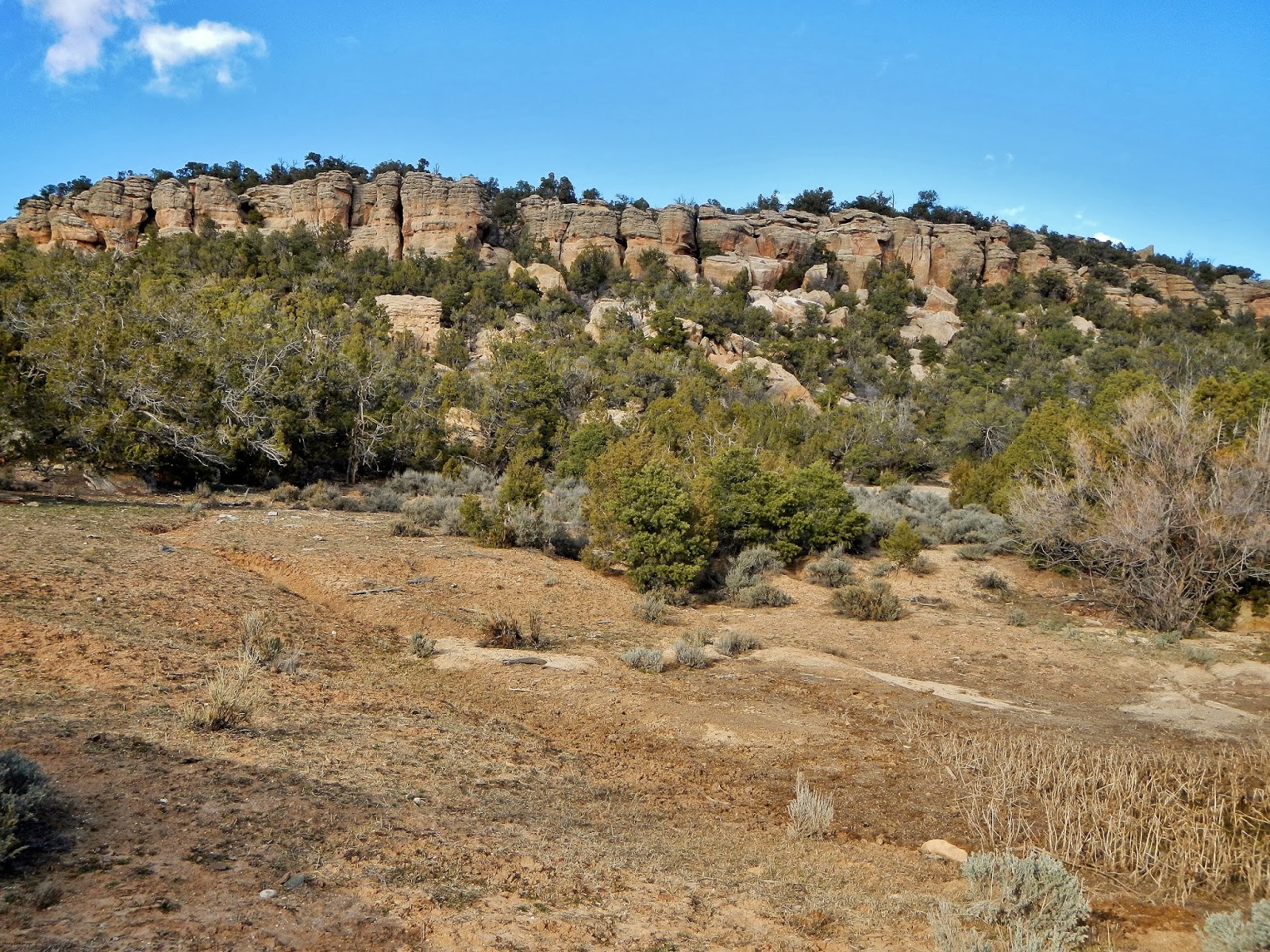 What we actually came down into was a small valley within the mesa top; we stopped by some rock formations and there was a small lake across from it.  I took a few photos of the formations, but it was not until I put them on the large computer screen at home that I found there had been a granary tucked into one corner.  I would say this was about 2 miles from when we had first started down hell road number one; I had forgotten to reset the odometer once we started down. 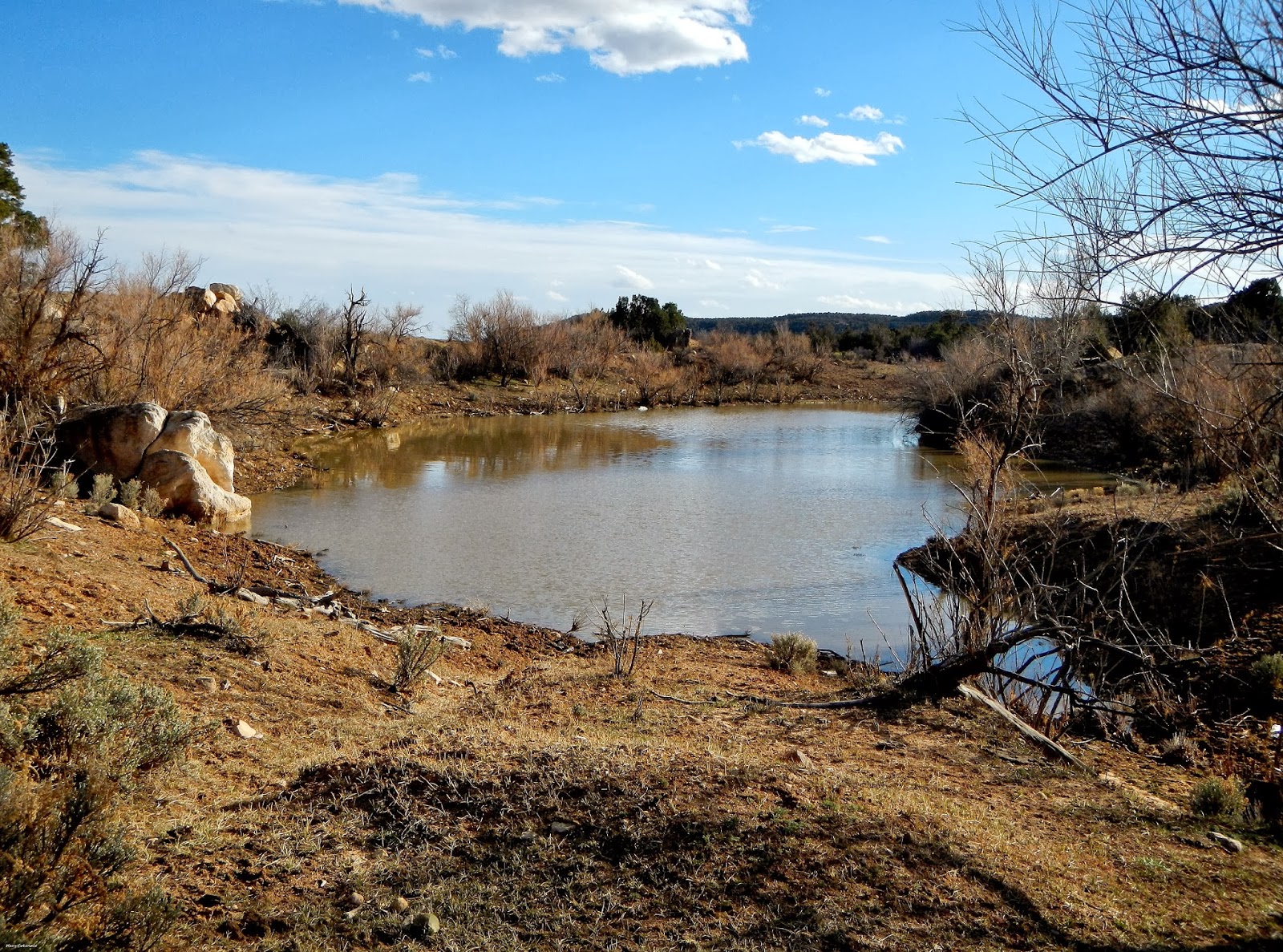 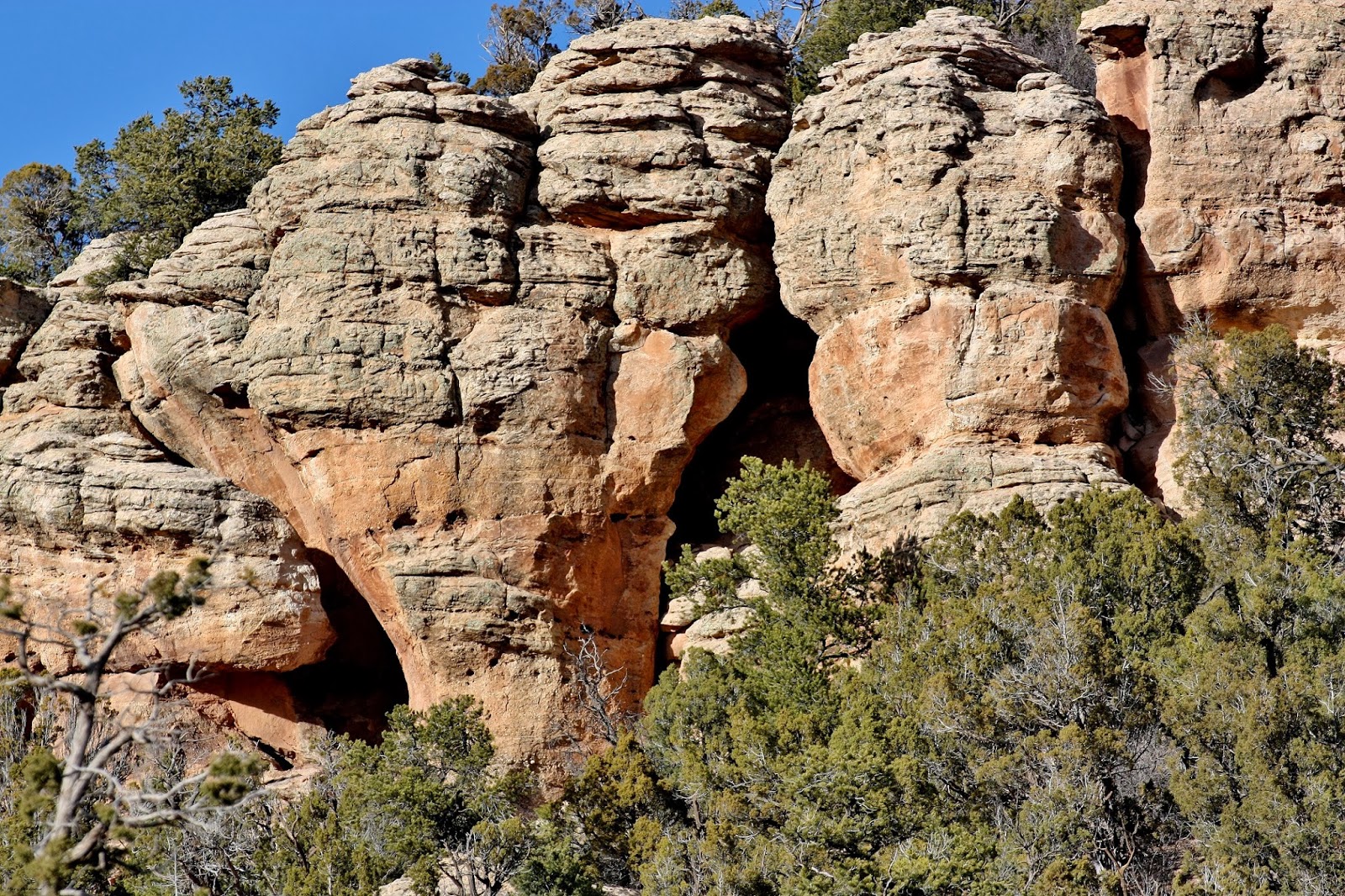 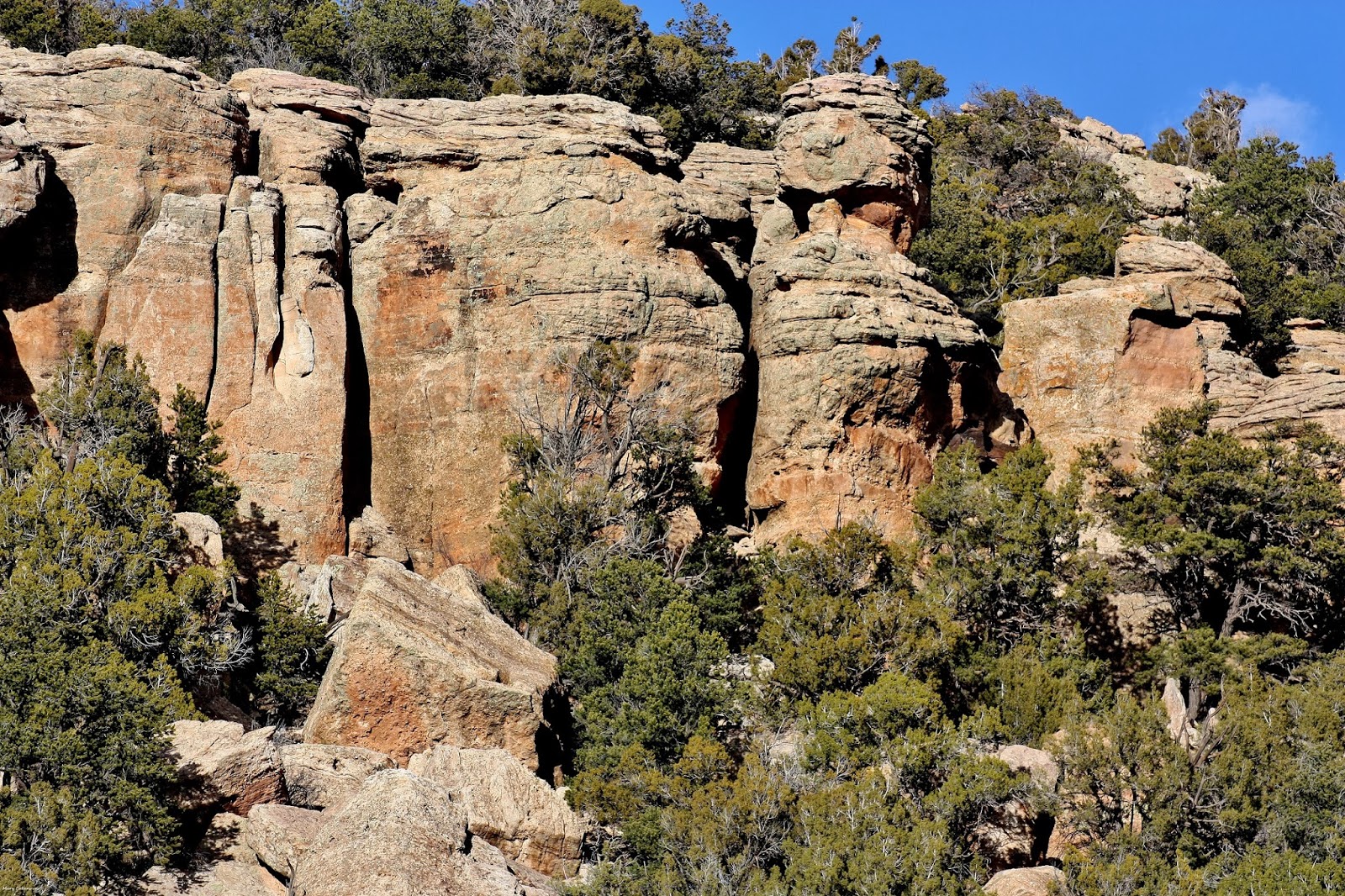 Ok, so Montezuma Canyon should be a hop, skip and jump away, right...wrong, very wrong.  We came to a fork in the road and, don't ask me why, but while I pointed to the trail on the right going downwards; Roy chose the road going straight and upwards again.  Wait though, maybe this is the correct way as it was very evident a road construction vehicle had plowed through and wooden markers with orange tags on either side; looks like something was going to be constructed around here.

Then we came to the 2nd road of hellish delight; I swear I will never ever do this again; well, never ever do Long Canyon Road to Montezuma Canyon again at least.  This second hellish delight is a totally primitive switchback trail descending from the top of a mesa, alongside the rock wall face, to Montezuma Canyon below...2200 feet below.  Think of it as what the Moki Dugway probably looked like in ancient times before San Juan County constructed a true roadway.  How I did not scream the entire way down, I don't know; but I did tell Roy, "if we die, I am so going to kill you!" and "if we live, I am so going to hurt you!"  Then there were many of those, "Hunny, not my side" with his response of, "not my side either!".

Oh, the Halls, they were very smart; they waited at the top of the mesa and watched our descent downwards until we came to almost the very end...then they proceeded down.


After saying our goodbyes, we headed north on CR 146 back to Monticello, the Halls went southward towards Three Kiva Pueblo.  All I can say at this point of the story is, Indiana Jones and his Marion would have been so very, very proud of us.