All Roads Lead to Montezuma Canyon - Route 191 to the Homes Built in Sandstone Hills.

As I warned you before, our travels throughout the canyons between Monticello and Blanding have been a series of convoluted journeys.  Telling you about the southern end of Montezuma Canyon Road - CR 146 first could be considered going "bass ackwards"; but that's how we roll.  Now, I'm going to begin in Monticello, actually at the Monticello Welcome Center located on Main Street; use this as your landmark if you're totally unfamiliar with this area.  The Center is exactly 5 miles, traveling south down Route 191, from the entrance to CR 146; there are no signs marking the road, but there are clues.  Montezuma Canyon Road is 34 miles in length to the junction of Perkins Road - CR 206; it fluctuates between graded dirt to gravel to a combination of dirt and gravel, but always graded and all standard vehicles can travel it easily.  It does narrow in many areas, so I wouldn't even think of taking an RV there at all. 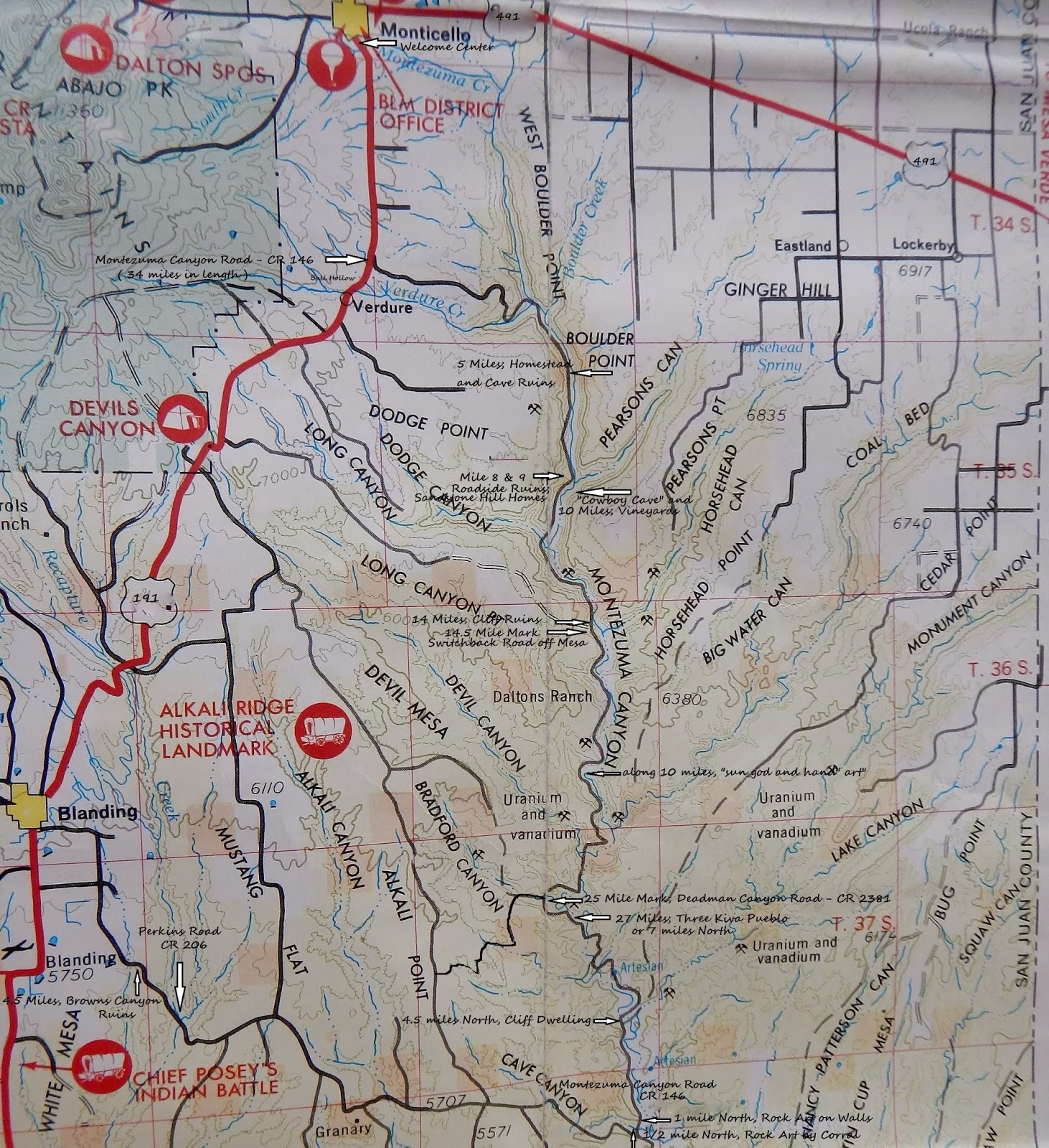 When you see mile marker 67, you're just about at the entrance; on your left will be a dirt road with a cattle guard, this is CR 146; if you reach Bull Hollow Raceway, you passed it. Do not go on the dirt trail that goes off to the left; follow the road as it curves to the right.  For about two miles you will pass by homes (lots of no trespassing and private property signs) until you come to a fork in the road; the road to the left is private, so continue straight, well sort of rightish, over the cattle guard. 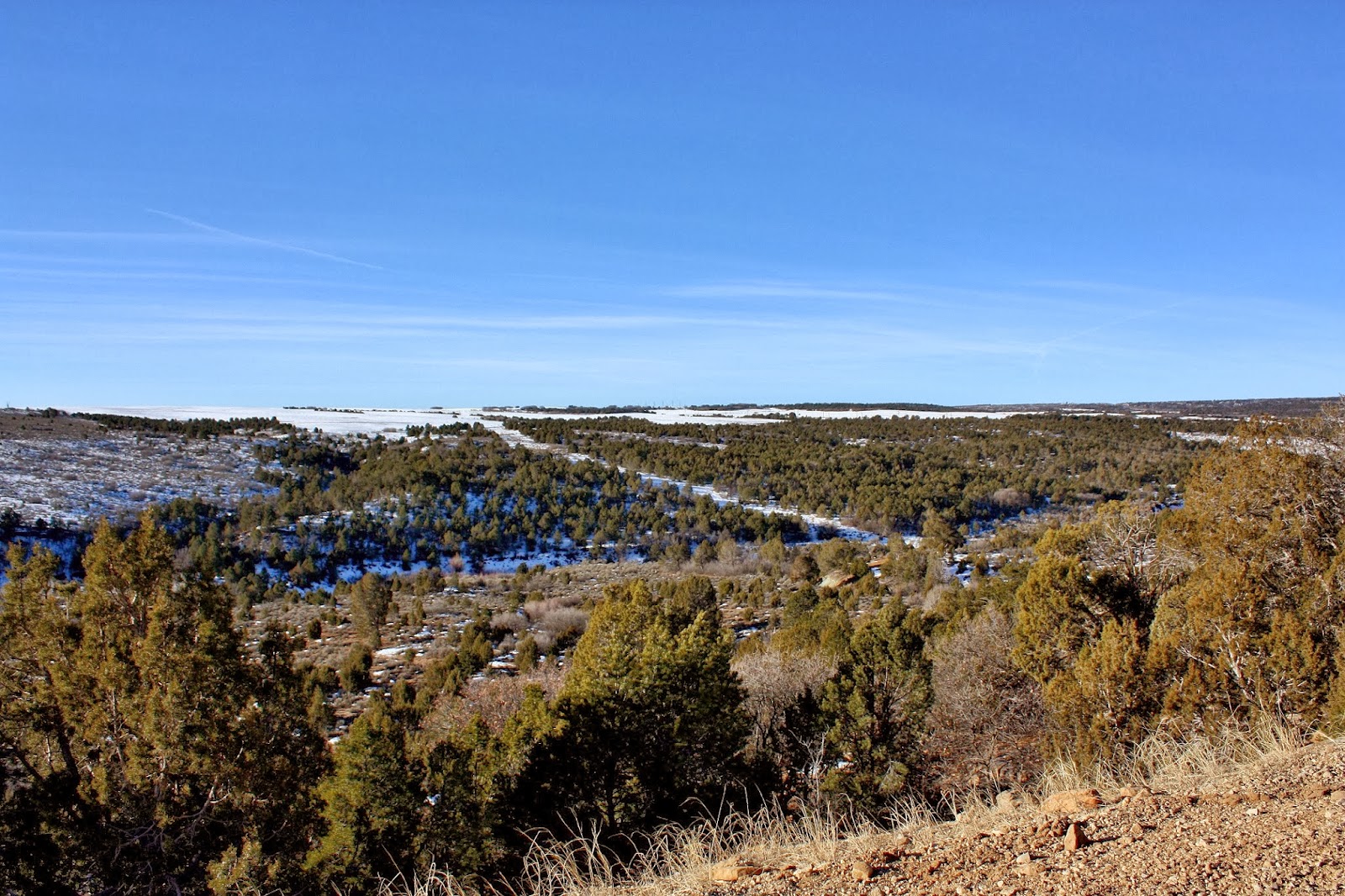 The next couple of miles opens up with lovely scenery, it also begins winding downwards, but it's not overly steep; stop and look behind you to see where you've come from and how beautiful it is. 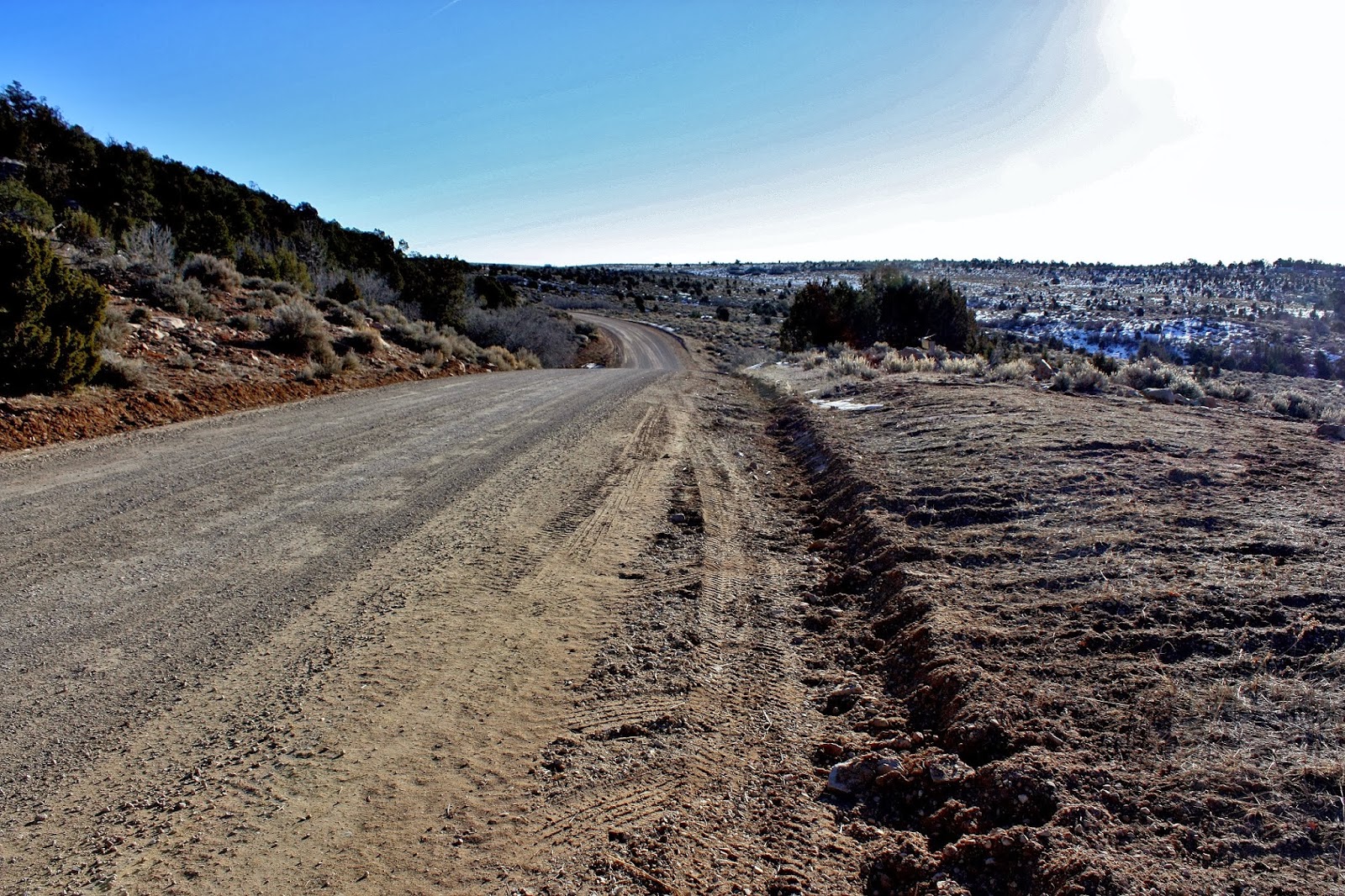 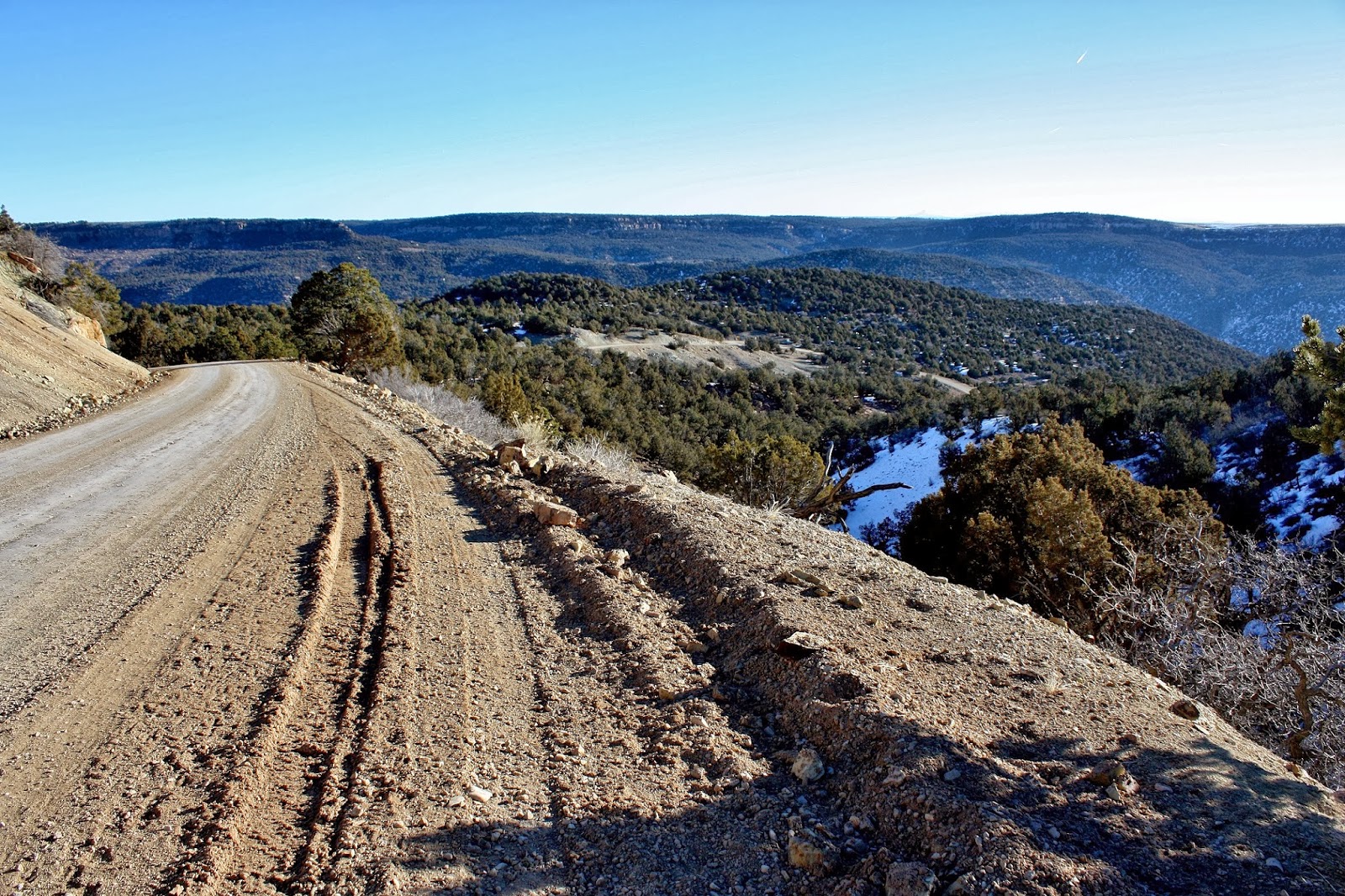 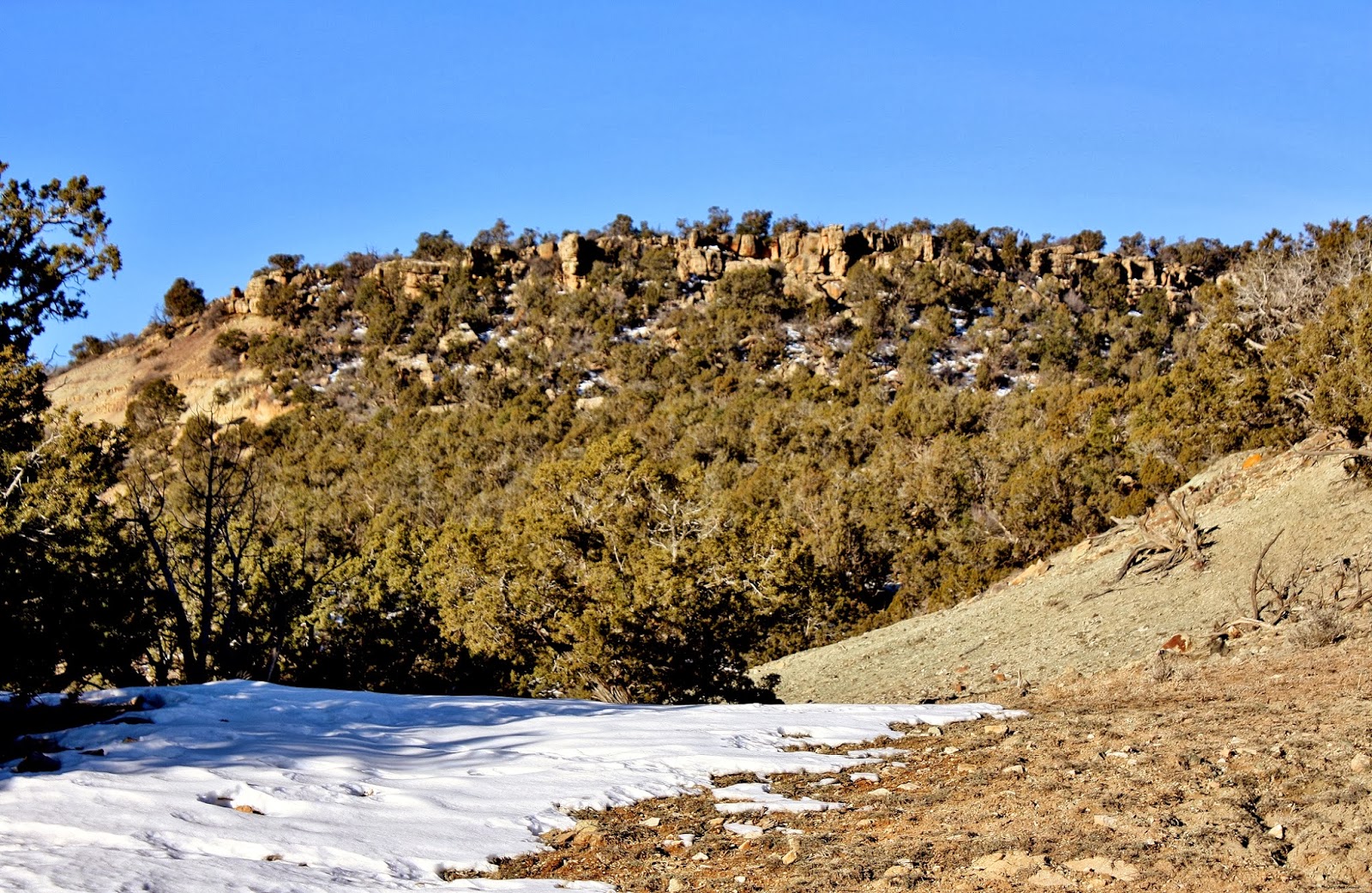 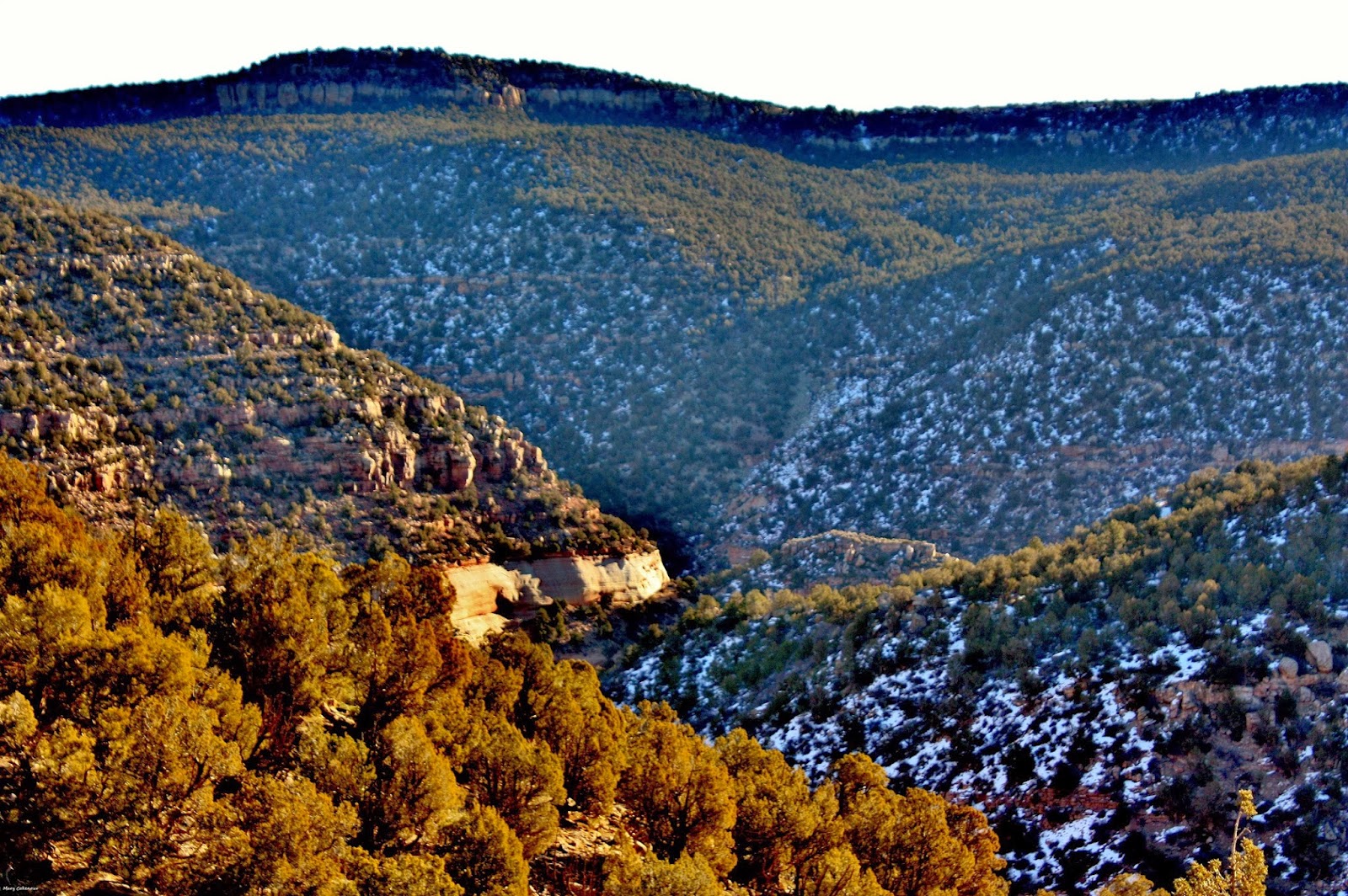 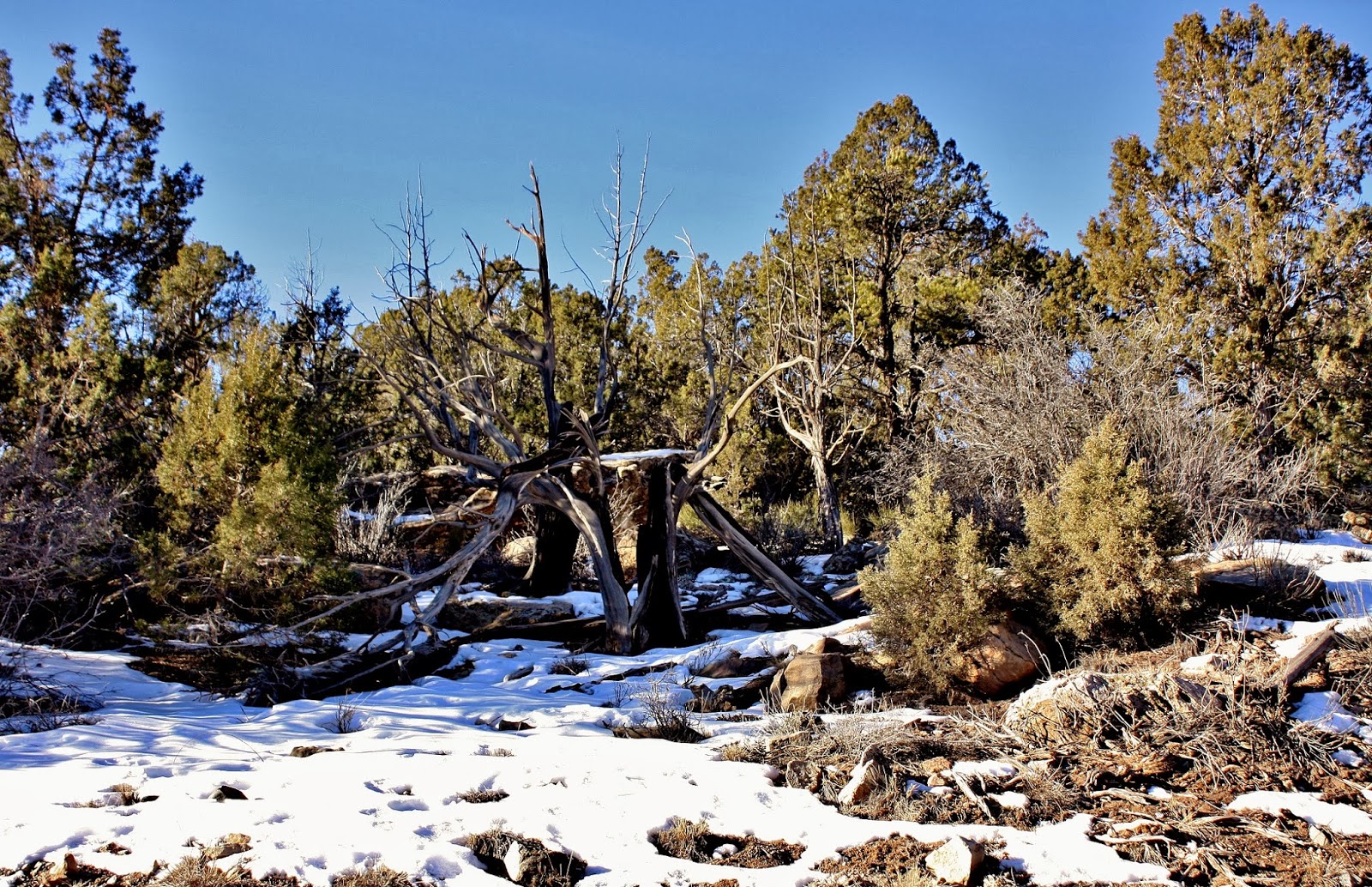 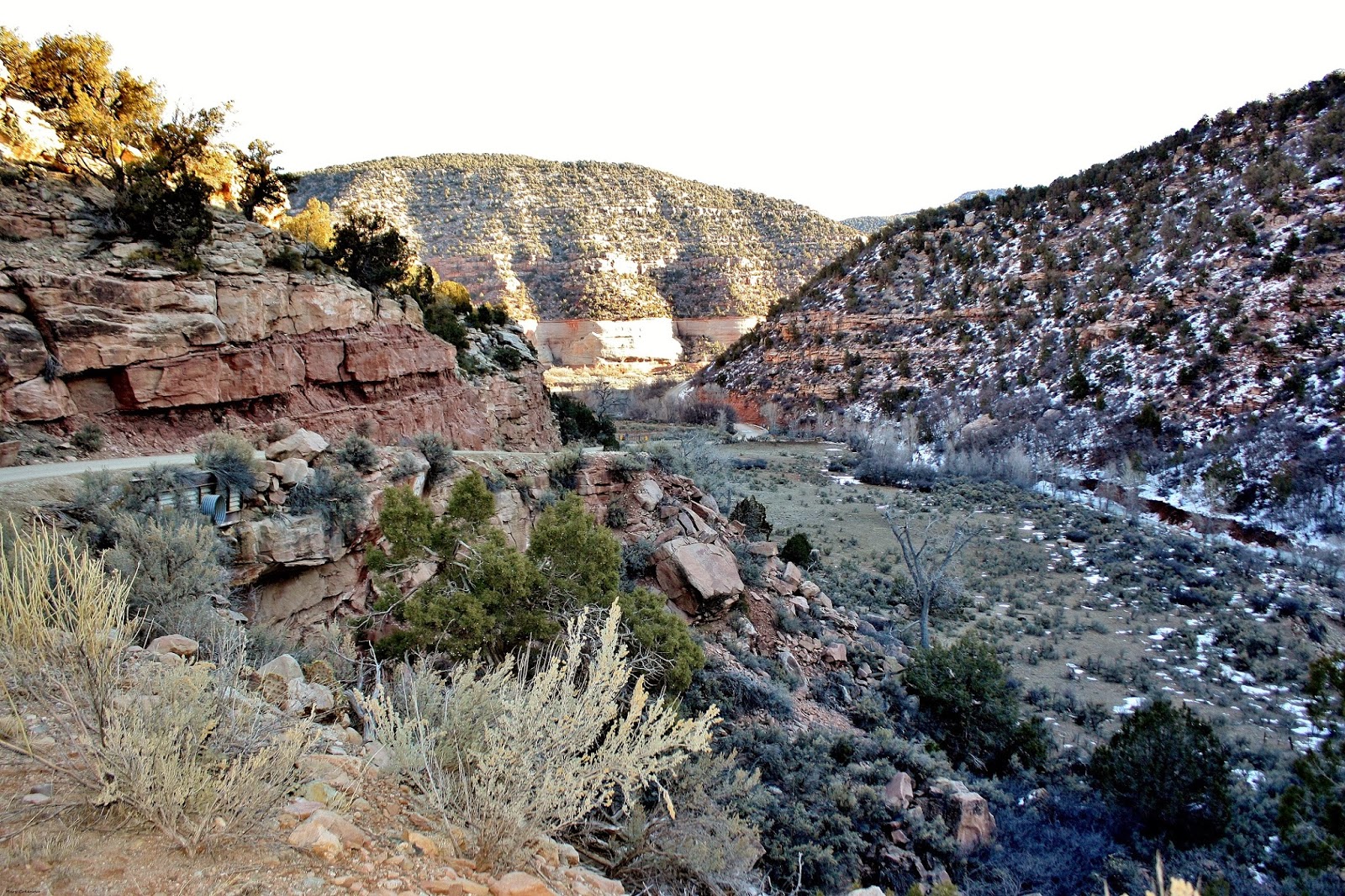 At the four mile point, the road begins the descent into Montezuma Canyon; you'll get a tease from the viewpoint ahead, but the best is yet to come.

Once you level out, expect to basically drive about 25 to 30 mph standard; you will find yourself crawling along in many spots, craning your neck to see if there are ruins in the multitude of caves, or rock art upon the walls.  Then there will be points where you just have to simply stop, look and take it all in.


At the base of the descent, the five mile mark, a dirt track on the left leads to a closed cattle gate (no trespassing sign); this is an abandoned homestead and while the wooden structures are simplistic, they're fascinating in their own right.  You will get a complete view as you continue traveling on CR 146; there will be an opening to a canyon beyond and then you will begin to see the caves, some with ruins inside. 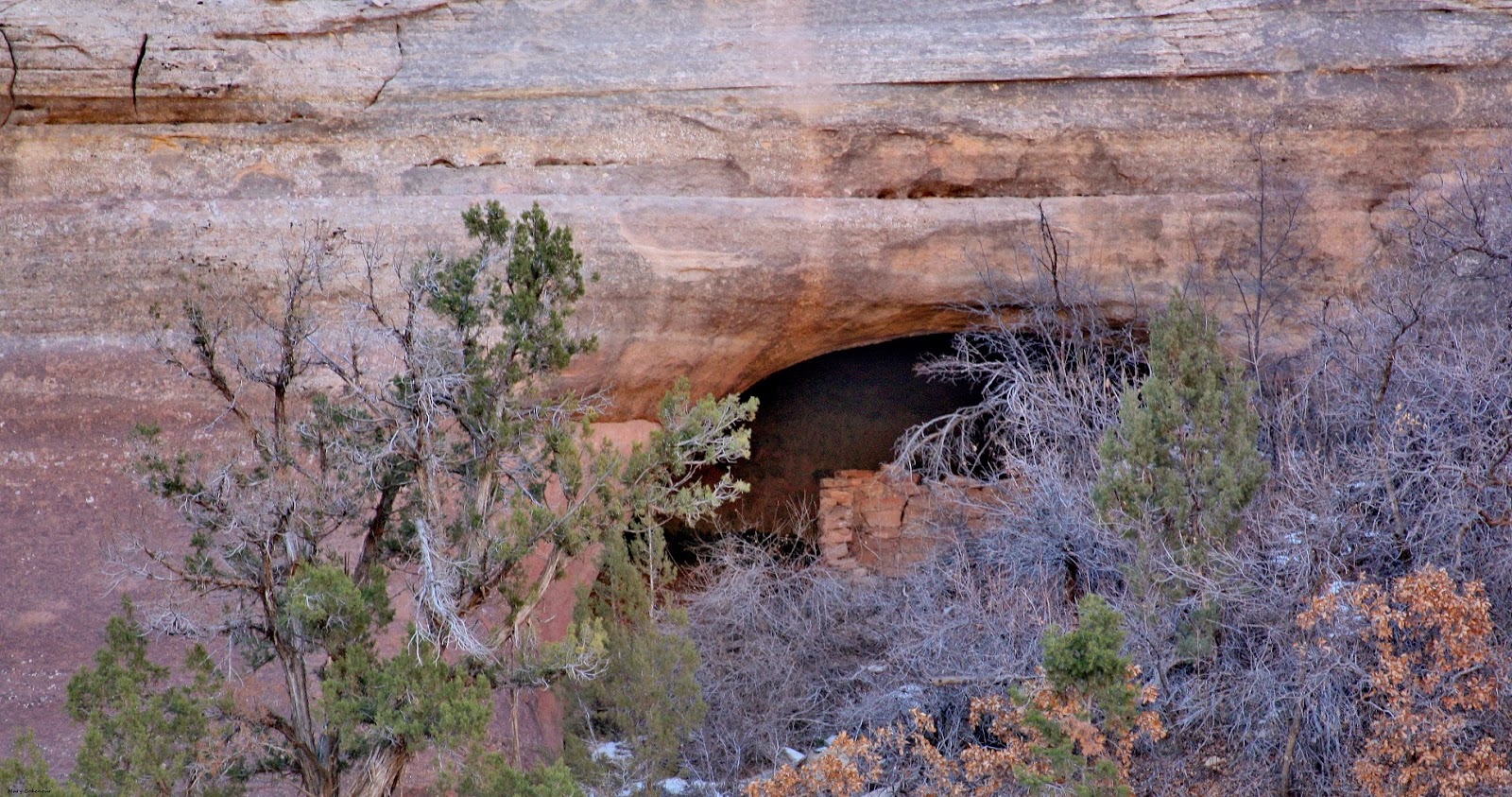 We didn't even attempt to count, or even stop to look at, every cave; there are simply too many.  From the few we did examine, several do have ruins not easily seen due to the distance and the overgrowth of trees and shrubbery.

Between seeing what is in caves and unusual rock formations, the next three miles will be slow going; I did tell you about those "mesa miles".  If you're like us, you will get a great workout climbing around trying to see formations from all angles; or what secrets might be around them.


There are going to be many points along the road where, if you weren't paying attention, or looking elsewhere, you would miss something spectacular.  Around mile 8 I just happened to look up between some tall shubbery and see a roadside ruin site.  You can walk upwards to the wall and there is a large cave, not much in ruins, but the way nature formed the cave in ridges is pretty neat.


Don't speed up too fast, maybe a half mile beyond is a set of beautiful adobe pillars and gate with a driveway leading to the first of homes built into a sandstone hill.  This is a large complex of buildings and we would so live here! 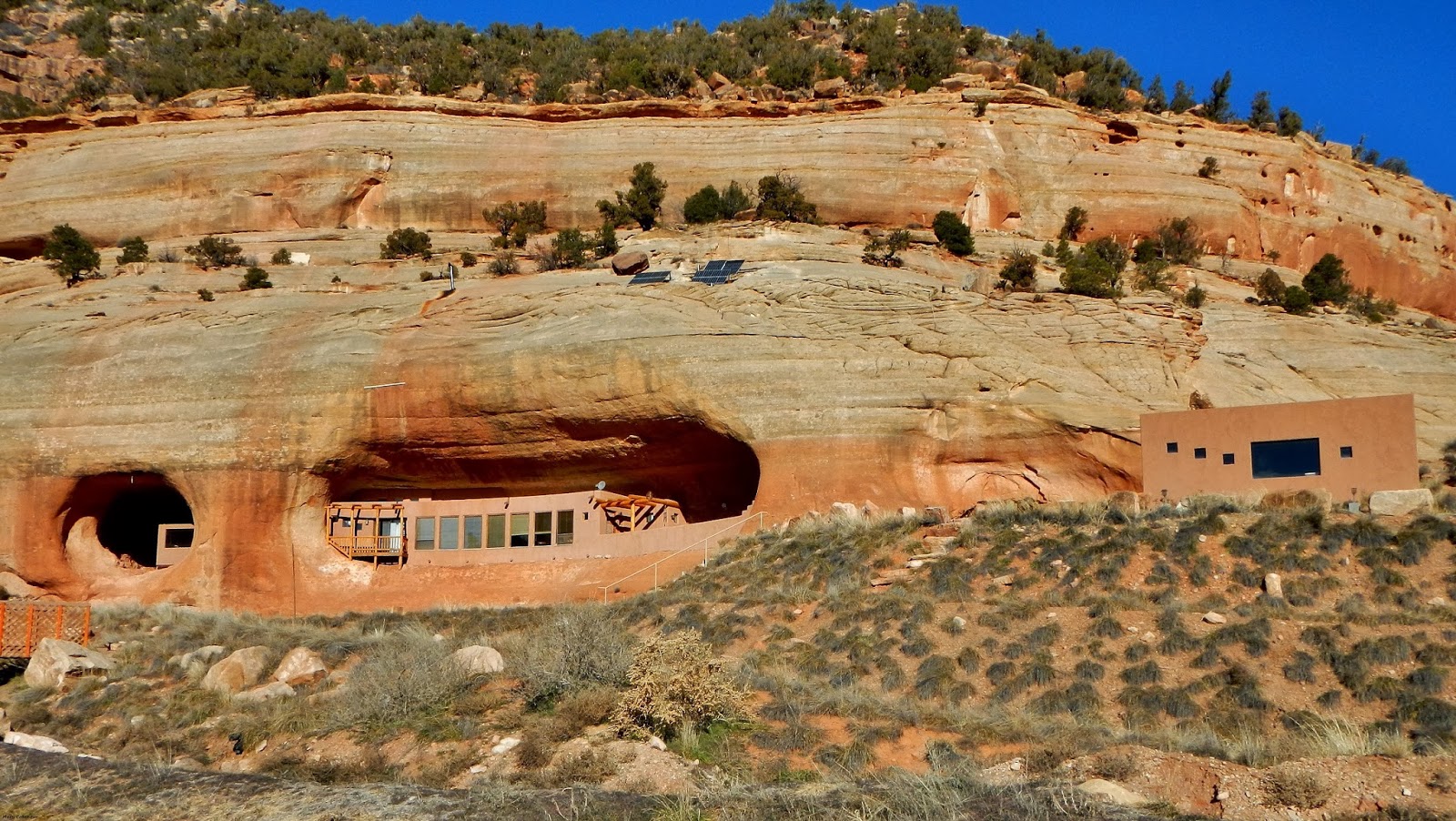 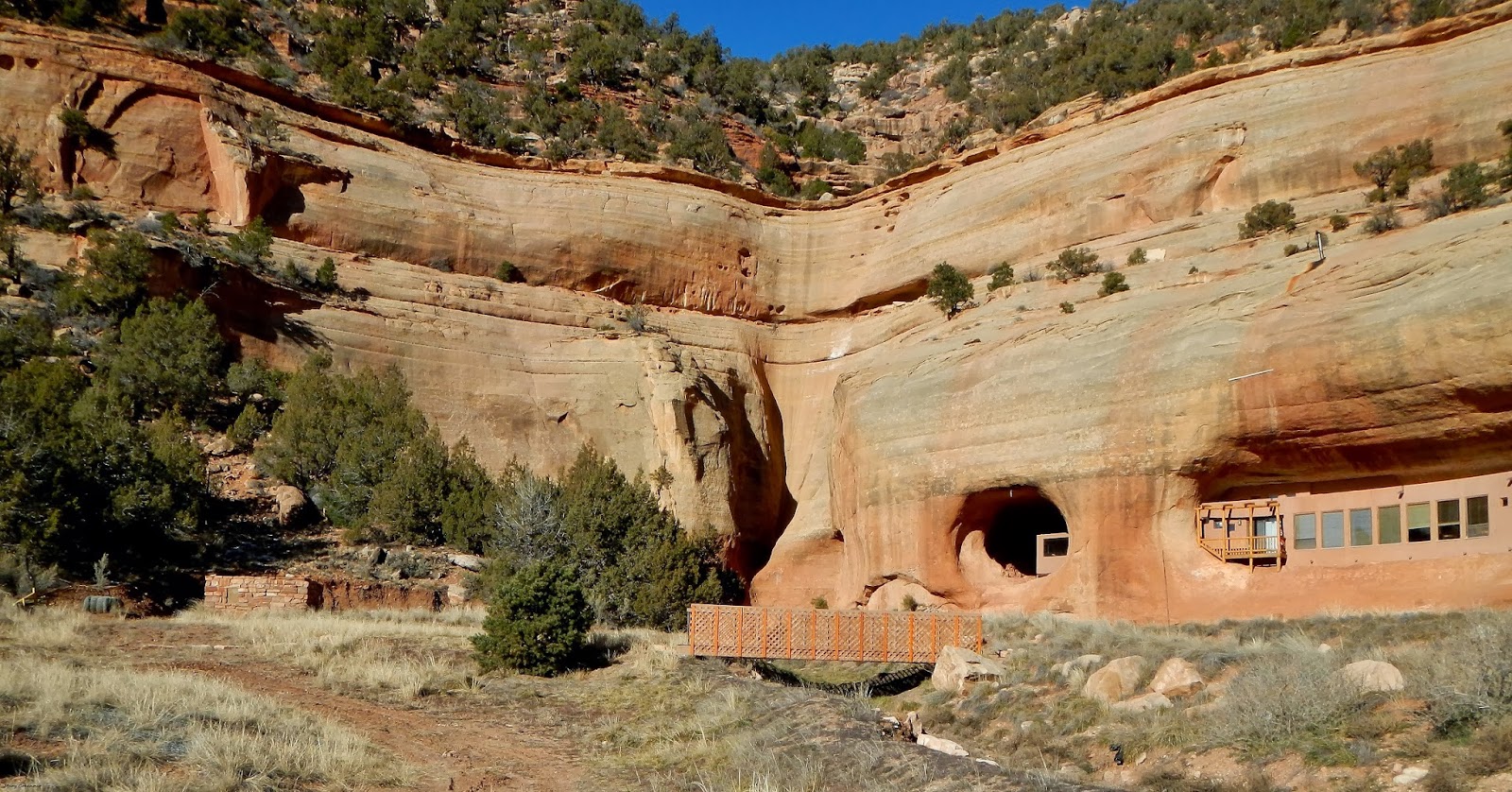 Then again, this home built into a sandstone hill at mile 9; we wouldn't say no to this one either!


...and this is where I'm ending this adventure for now.  In the next write up, there will be vineyards, yes, vineyards!; more ruins and an amazing petroglyph of what we refer to as "The Sun God and the Hand".  There's your tease...