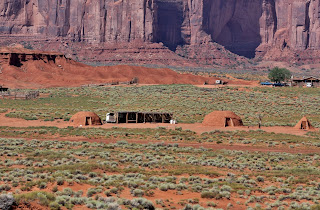 When I left you at the end of part one we were traveling into Central Monument Valley.  One fact you will discover in the Valley is that people live there; you'll see homes and plenty of "Private Road, No Trespassing" signs.  Many of the Navajo live in homes built in the design of their ancestral home, The Hogan.  The female Hogan has nine support poles to represent the nine months it takes for a woman to carry a child; the male Hogan has four support poles to represent the four points on the compass.  The female Hogan has a rounded dome roof shape, while the male Hogan is more conical shaped, similar to a Teepee.  Next to the Hogan is a small conical shaped building and this is the Sweat Lodge, used for ceremonies and meditation.

Hush now and don't make a sound, or wake the Sleeping Dragon and consider yourself lunch.  Remember, you are crunchy and good with ketchup when it comes to dragon food.

Looping around the Sleeping Dragon, the guided tour will bring you to an area with a large sand dune that you can climb up to an arch, the Ear of the Wind.  There is also a climb you can make up to a dead cottonwood tree that gives a full view of the area. 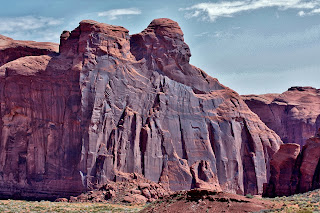 Looping, we did a lot of looping, behind the Sleeping Dragon brought us past Chief Hoskaninni.  Since this was only a three hour tour, the guide could not stop at every formation, so I ended up taking many photos on the fly.  While I could not get a really good shot of the Totem Pole in the distance, we paused long enough for a better shot of The Bird and Hand of the God just a little way past.


Now here comes the really tricky part, trying to get photos of the arches in the next area.  We did stop at the Big Hogan, but raced past Eye of the Sun and Moccasin Arch; luckily we had to stop to wait for another tour vehicle to go by, so I was able to get some what decent shots of those two. 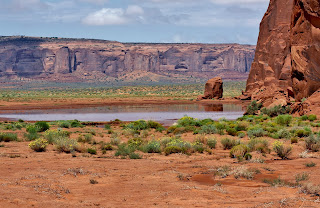 The three hour tour was coming to an end and we needed to get back to Goulding's Lodge to have lunch at the Stagecoach Dining Room﻿﻿ (good food too, so try it out).  Racing around the small "lake" that had formed due to the torrential rain the night before, we stopped to glance at petroglyphs on the rock face. 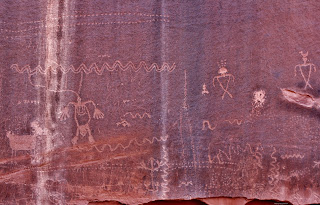 Blurry as this next photo is, I consider myself very lucky I got this shot of Donut Arch; the guide definitely had the pedal to the metal. 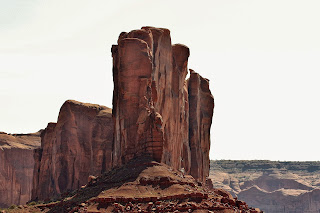 We did once last loop before getting to the main thoroughfare and I was able to capture The Thumb and Cly Butte.


Now remember, part one and two of this story I've told is only about a typical three hour tour; imagine what you'll see on the all day tours - more wonderous formations, arches, petroglyphs and ancient ruin sites!

I've also mentioned that Monument Valley is dramatic no matter what time of day you go, or what the weather is.  Here are a few random shots I took at sunset, with a storm approaching: 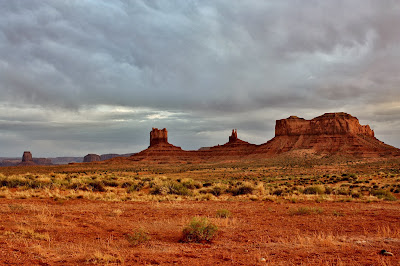 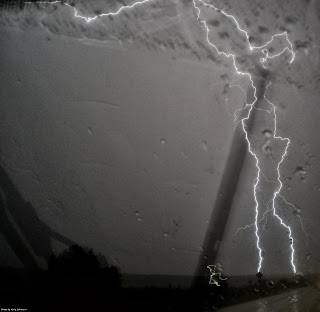 ...and this is what it is like to be in Monument Valley on a very dark and stormy September night, with the lightning coming down around you. 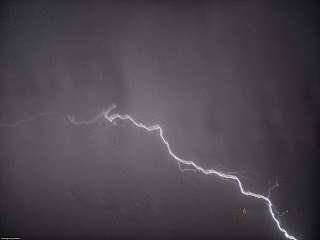 Dramatic, right!?!
Well folks, that is the end of the two part tour of the Monument Valley tour I was so very lucky to be on.  Afterwards, I was sore and bone tired, but I would not have missed this for the world!  I hope you enjoyed the ride as much as I did.
Mary Cokenour
Posted by Mary Cokenour at 6:11 PM