Well folks, we finally made it into Monument Valley and if you think what you see on Route 163 is stupendous, wait till you get further inside. Roy and I were very lucky to be able to take a tour with members of the San Juan County Economic Development and Visitors Services, and Community Ambassadors from Monticello, Blanding and Bluff Fort; we all had a blast! The photo of us isn't the greatest, but what the heck...we were there! 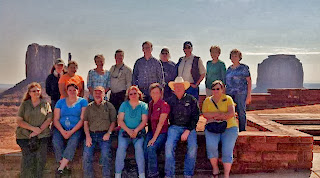 We did the morning three hour tour through Goulding's Lodge, and yes, we did sing the theme song from "Gilligan's Island" as we started off. I'll be doing a complete write up of Goulding's Lodge in a later post, but they also have an afternoon three hour tour and an all day tour which includes a luncheon. There are other tour groups for Monument Valley, but Goulding's is the only one I'll be able to give you photos and information about. Let me say this right now, you want to go on a guided tour; #1 - the guides are Navajo and know their own history and culture; #2 - the roads are 100% "primitive", so unless breaking an axle on your vehicle is your life's dream...take the guided tour!!! So, lets begin this adventure, oh, and there are so many photos to show, I'm going to have to make this a two part write up.

Lets begin with the ride down Route 163 (Utah towards Arizona) towards Monument Valley; that morning we had to be at Goulding's before 9am, the sky was hazy with sun and thick clouds. Off to the right is Eagle Rock, Setting Hen and Sleeping Bear which were shrouded in cloud cover, so I'm also posting a photo of the same site that I took in the early spring which shows the formations more clearly. 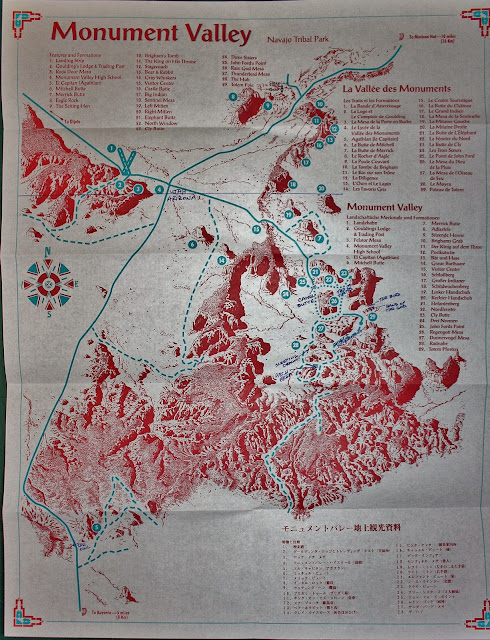 Before I go any further, I better post a map of Monument Valley that is given out for the tour; I've gone ahead and written in the names of any formations not listed.

Even though I'm going to do two parts on my write up, each posting is going to be rather long and the map gives a good hint on why.

By the way, Monument Valley is spread across two states: Utah and Arizona.


The sun coming from the East will make photographs a little difficult, so apologies if the ones I post are on the hazy side.  In my second posting, I will display a few I took at sunset on another occasion; Monument Valley is dramatic no matter what time of day you're there.  This panorama is on the left side with Brigham's Tomb, The King on His Throne, Stagecoach, Bear and Rabbit, Castle Butte, Big Indian and part of Sentinel Mesa.

﻿
After parking at Goulding's Lodge and getting settled on the tour vehicle (sort of like an open air heavy duty bus), we first visited a Hogan...and there's your tease for my write up on Goulding's to come later on.  Off to the Valley we go, and as we get closer to the entrance fee booth, Mitchell Butte and Grey Whiskers will come into sight.  Now our Navajo guide explained to us that Mitchell and Merrick Buttes were named after two miners who came to dig around in the Valley in the 1800s, but were slaughtered by Ute Indians who were in the area also. 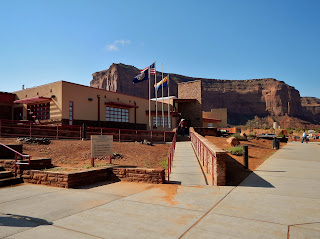 First stop is the Monument Valley Visitors Center which contains a restaurant, museum and The View hotel; you can also get hooked up with one of the other guided tours there.  While the view from the parking lot back towards the entrance is pretty neat, wait till you see the breath taking view from the patio area and prepare to become speechless.  If you stay at the hotel, the windows of the rooms face out towards the Valley, so no wonder it is simply called "The View". 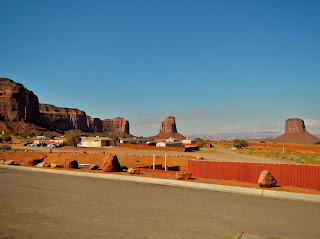 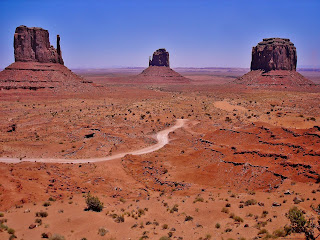 The Left and Right Mittens, and Merrick Butte together are the iconic view that represents Monument Valley; it is on written material, postcards, book covers, seen in practically every movie and/or commercial filmed in the Valley.  Just a split second glimpse and you immediately know them.  Did you know that there is a small arch in the Left Mitten?  It's not easily seen until you get down onto the Valley floor.  Now remember, the "roads" are primitive; in other words, this will be a very bumpy ride, so lets head on down.

The guide took us up to a flattened area that held many vendor stalls for purchasing handmade Native American jewelry, dream catchers, shields and ceramics.  You'll also have a closer view of The Mittens, and Sentinel Mesa and Castle Butte in the distance.

﻿
Back on the road, bumping along; Elephant Butte and Camel Butte will be coming up soon.  Let me tell you that the formations in the Valley are huge; I mean make a dinosaur look like a tadpole huge! 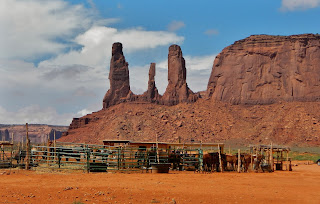 The Three Sisters will be coming into focus and that means John Ford's Point will be the next "get off the bus and stretch the legs" stop.  John Ford was the film director who basically made John Wayne a star and household name; he loved staying at Goulding's Lodge and making movies in Monument Valley.  Every day, for the tours, a cowboy in a red shirt will ride a beautiful horse out to the Point and pose; it's a nice dramatic effect.  Oh, I forgot to mention, you can do a guided tour by horseback; check at the Visitors Center about that.

You'll also be up front and personal with The Three Sisters; there will be vendor stalls once again and a food wagon selling Navajo Fry Bread. Eating fry bread is a must! Doesn't matter if you've already had a meal, doesn't matter if you are on a diet, you must have fry bread to make this a total experience! 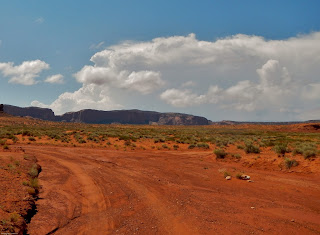 Back onto the bumpy road towards Central Monument Valley and that is where part one of my story is going to end.  What lays beyond is a further wonderland of formations, arches and petroglyphs, till then...

Posted by Mary Cokenour at 3:30 PM