It's Getting Colder, but 4-Wheeling is Still Hot.

Yes, it is getting colder up here in Monticello; we're at 7100 feet above sea level and 20 degrees cooler than Moab down north, or Blanding down south. Even though we might be getting ready for the winter, doesn't mean we cannot keep on enjoying going out on the trails. For awhile now Roy and I have wanted to see where a road next to Turtle Rock leads off to, so we got into the SUV and went adventuring once again. Turtle Rock is just a little way past the entrance to Route 211which leads to Newspaper Rock, Bridger Jack Mesa, The Six Shooters and Canyonlands - Needles District. The road next to Turtle Rock is East Canyon Road, unpaved, and with all the recent torrential rains we've had, a bit more damaged; don't be surprised if you have to cross through some water along the way. 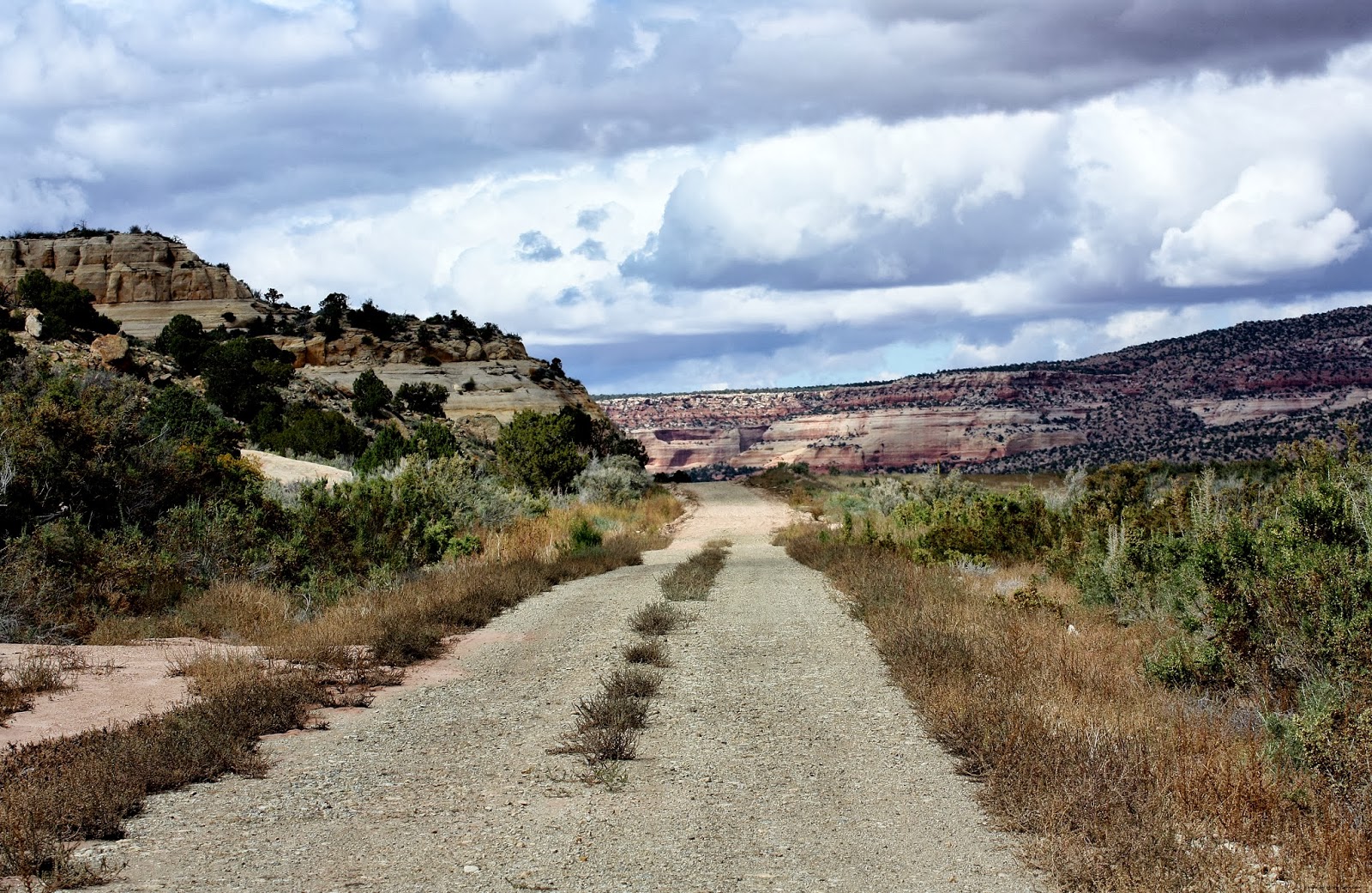 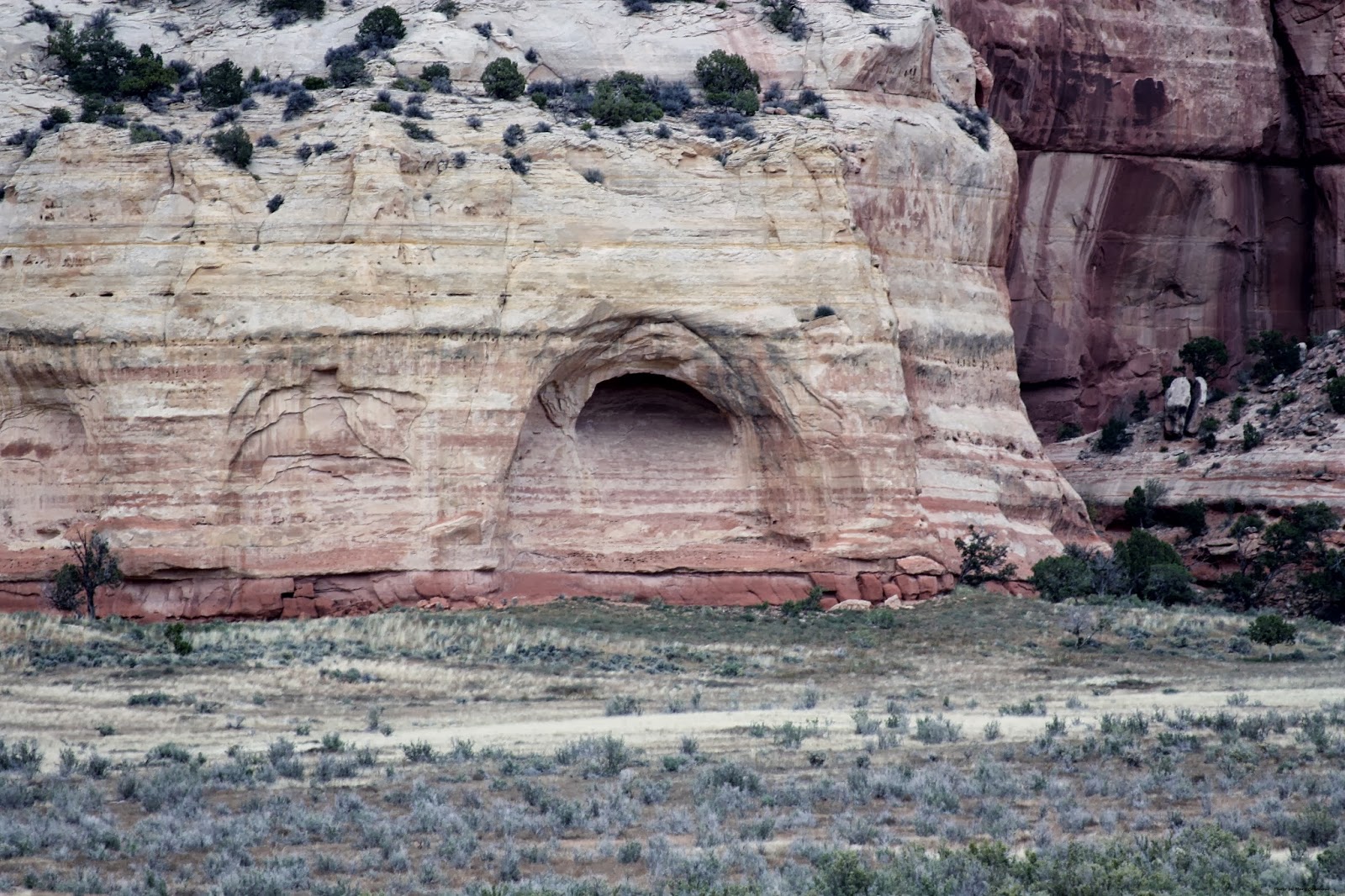 The landscape along this road is lovely; the shadows of clouds mixing with beams of sunlight to show off the textures of the sandstone and slickrock.  There are many rock caves that have been created from water and wind erosion; one or two have the look of becoming an arch someday in the future. 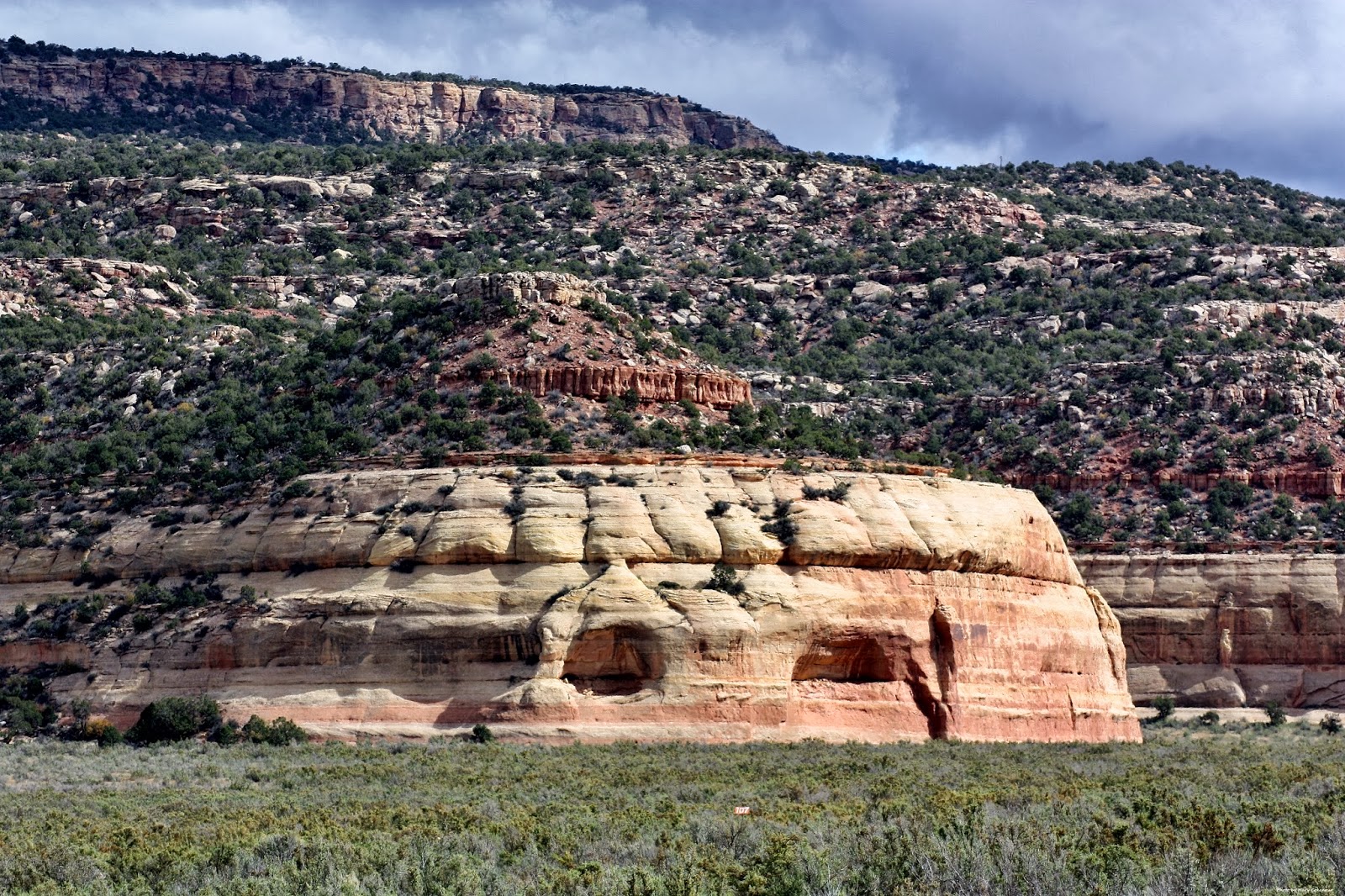 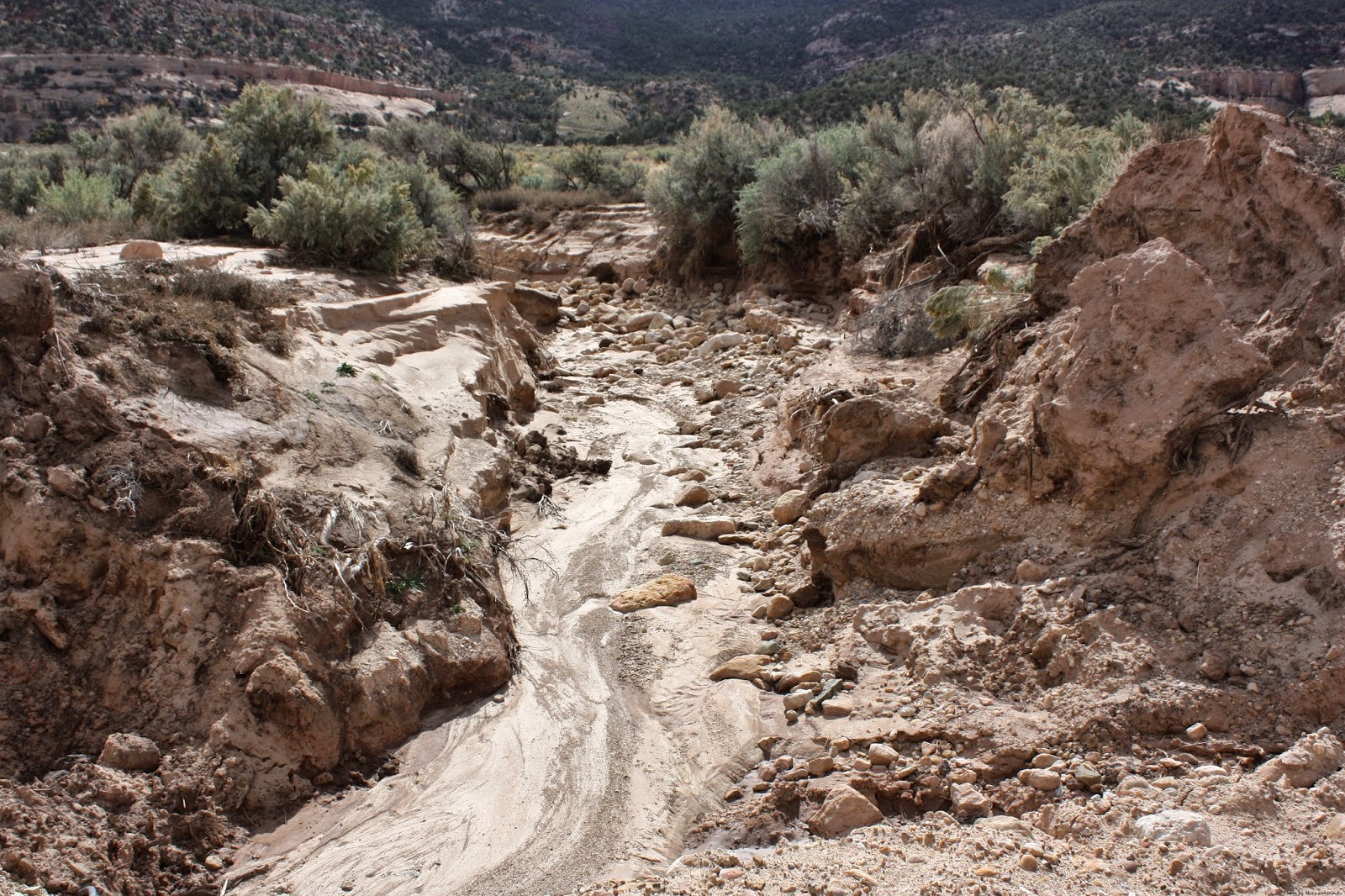 Here and there were dried river beds, but the damage and obvious movement of the surrounding sand and dirt told us that flash flooding was going on during the rain storms. 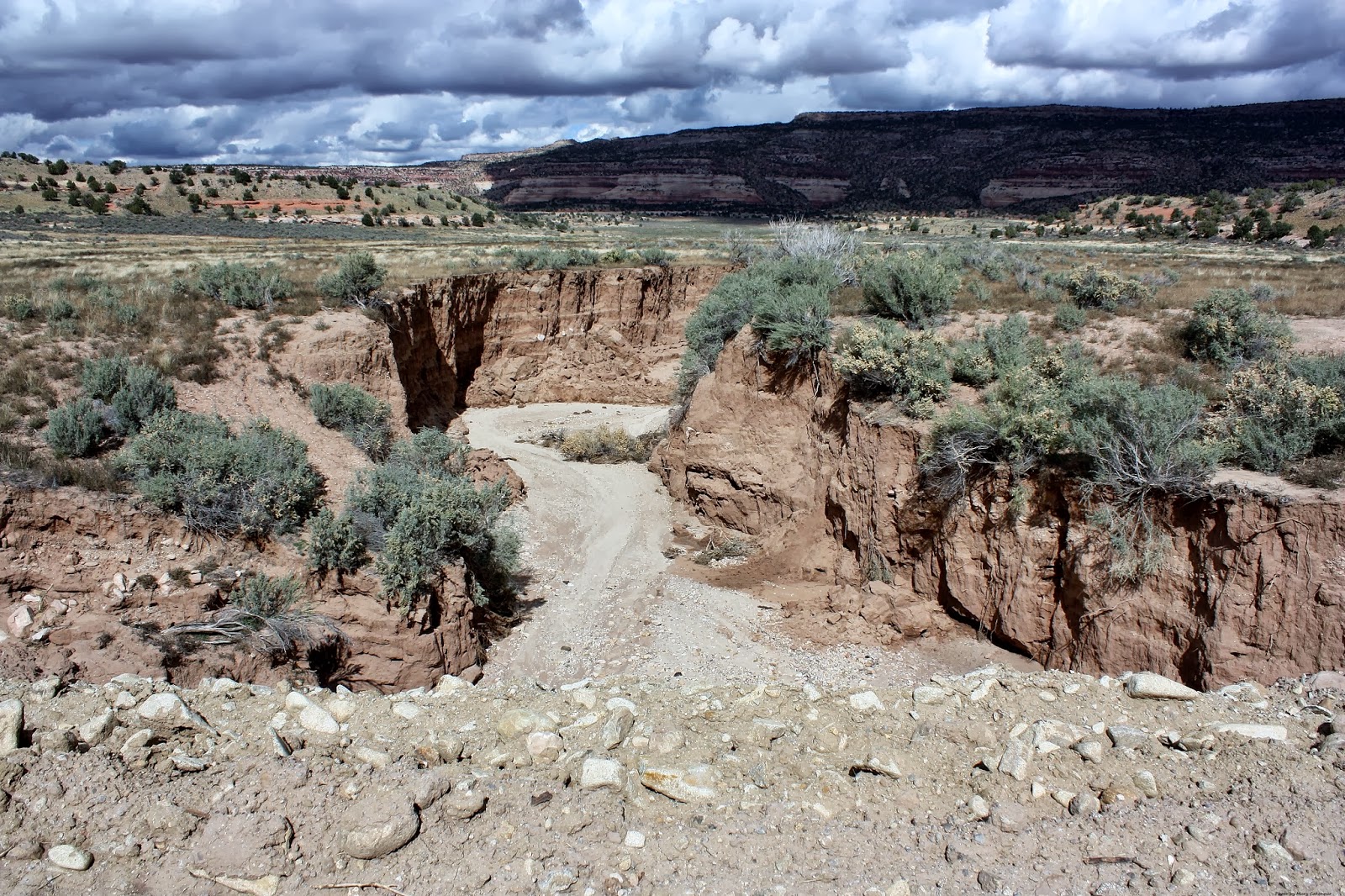 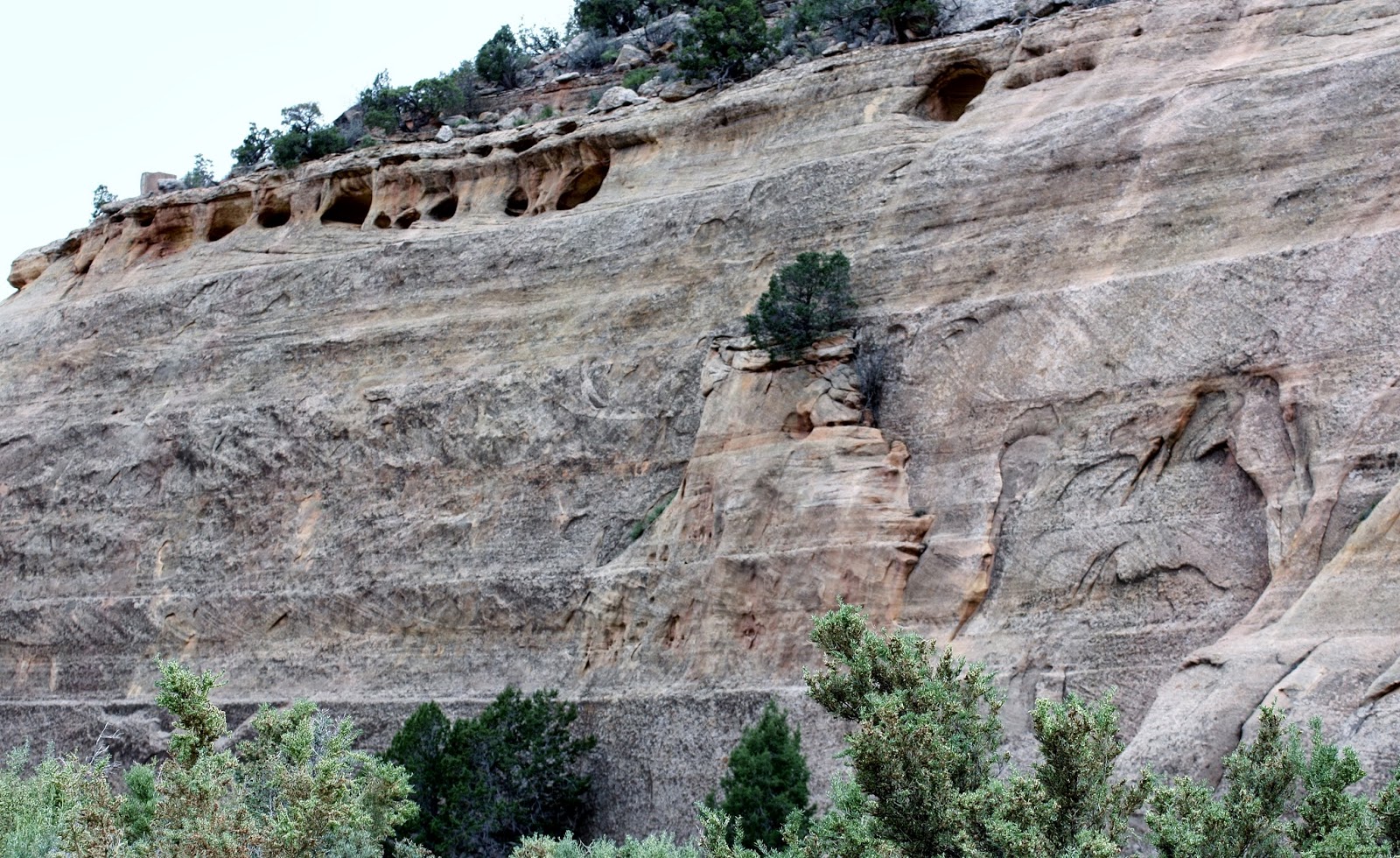 Glancing up at the sandstone walls, caves could be seen running along the the high cliff edges; nesting material for local hawks stuck out from a few while red desert varnish created "faux" rock art within one. 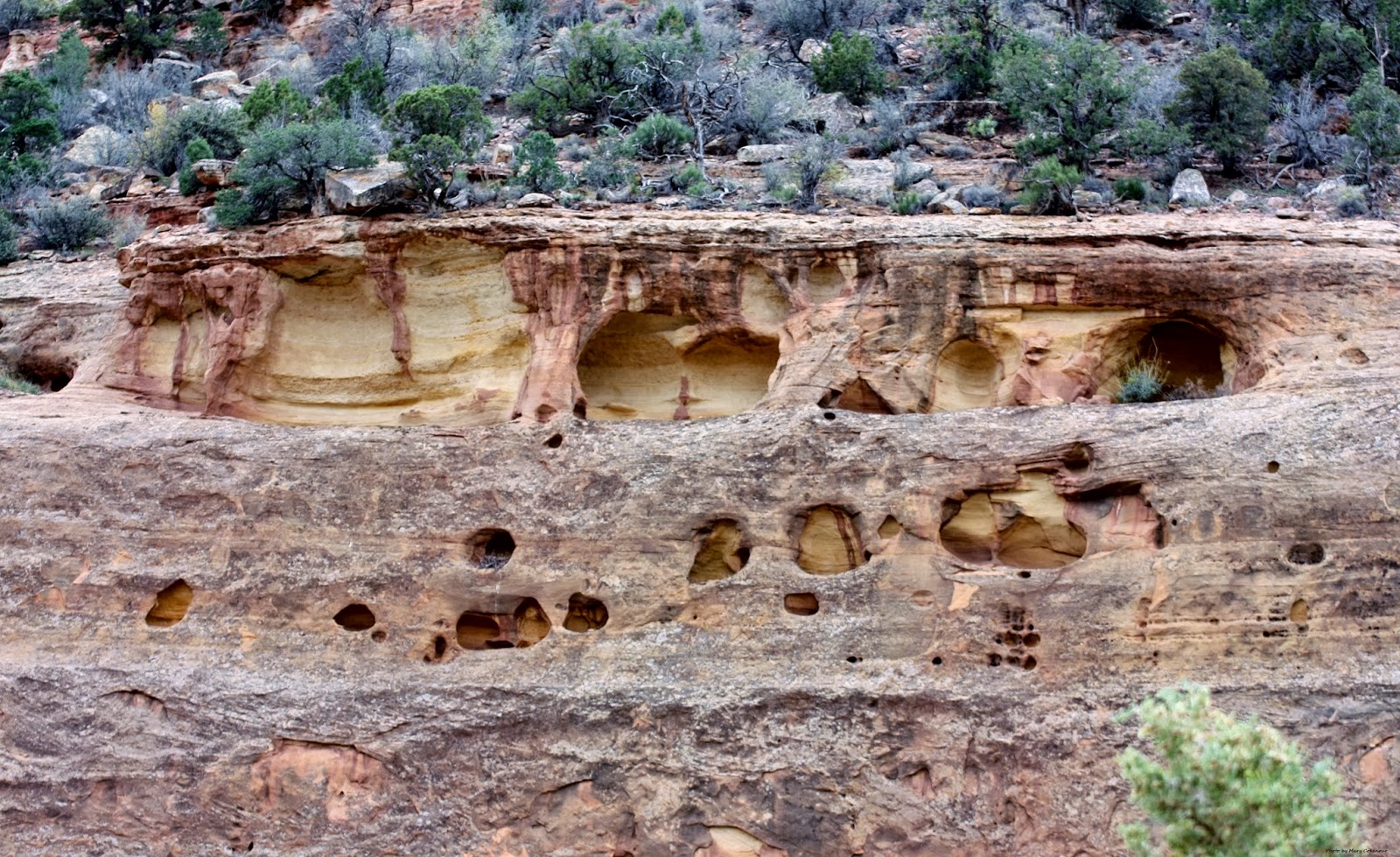 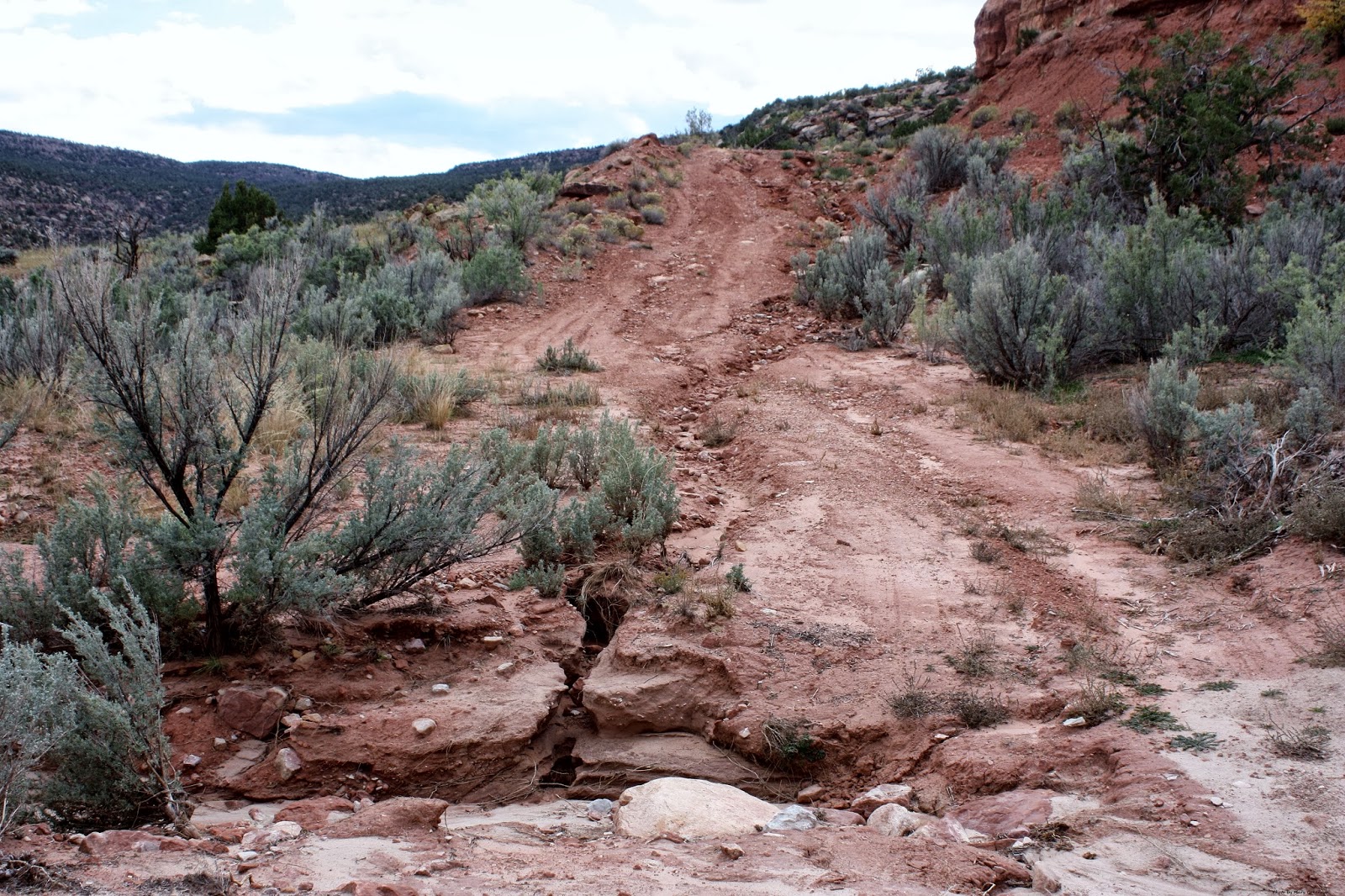 Suddenly our fun was cut short as we came face to face with a dead end of sorts; the SUV would not be going any further, but anyone riding an ATV would have been able to manuever up the rocky dirt path as evidenced by tire tracks. I walked up the dirt trail to see what was beyond, but while a spectacular view was off to the left, the trail continued around the hill.   Nearby were several holes dug into the dirt, whether by prairie dog or rattlesnake we could not tell; no one seemed at home which was probably a good thing in the case of rattlesnake residence. 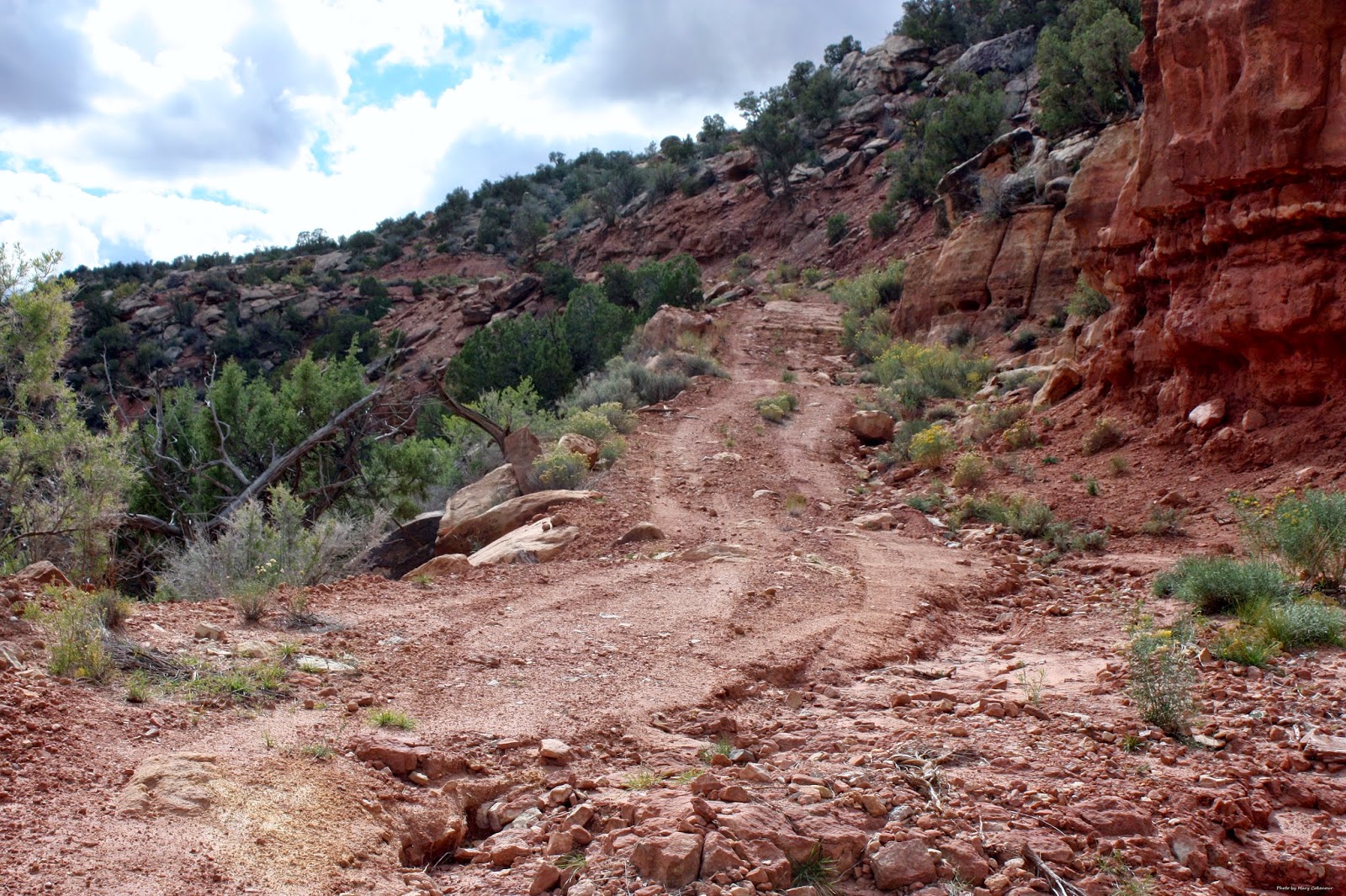 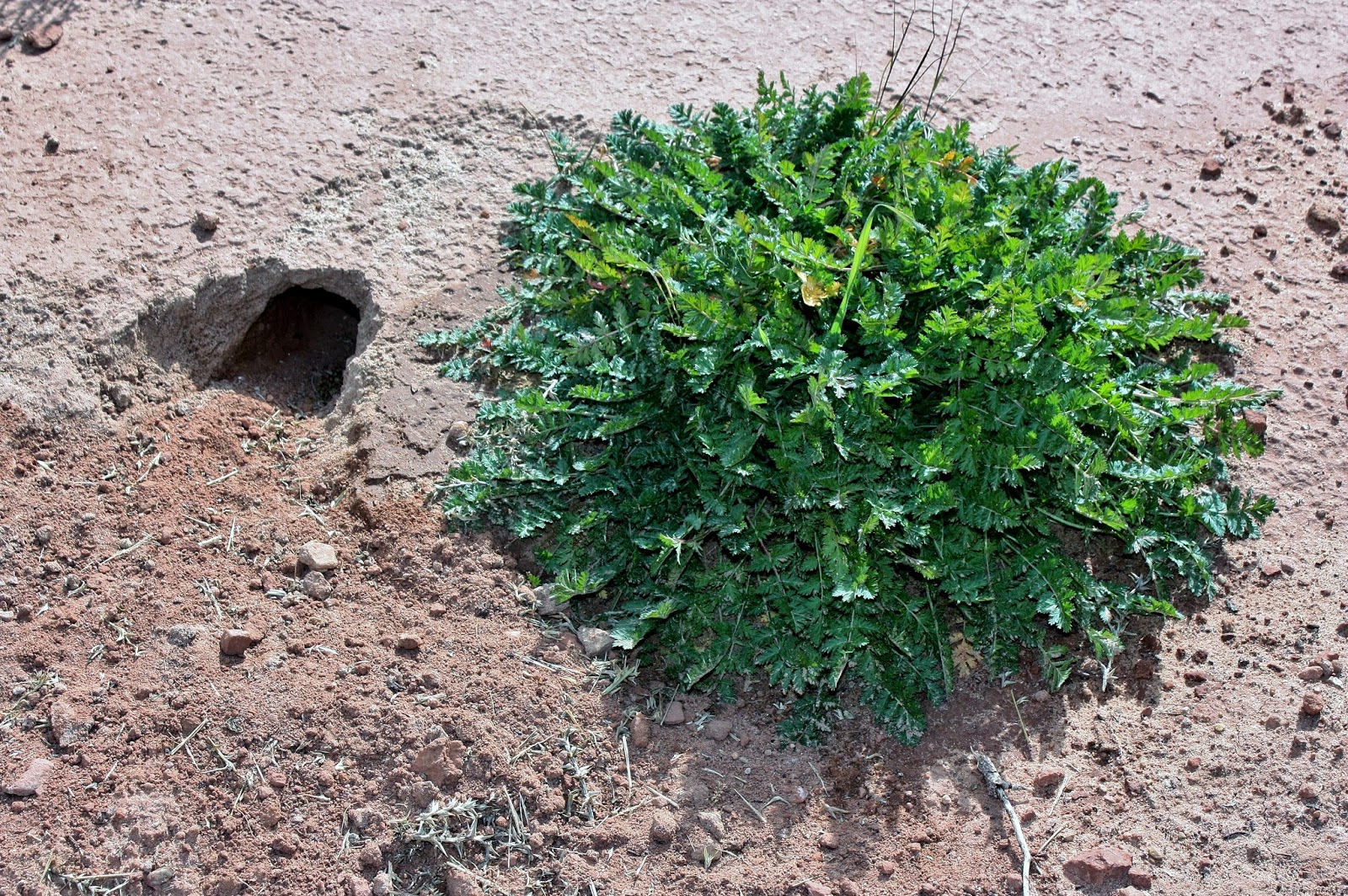 The rock walls were carved by the rain and wind into barrel formations, and while we would have loved to explore, movement told us that some creature was walking around behind the plant life.  Best to leave them be. 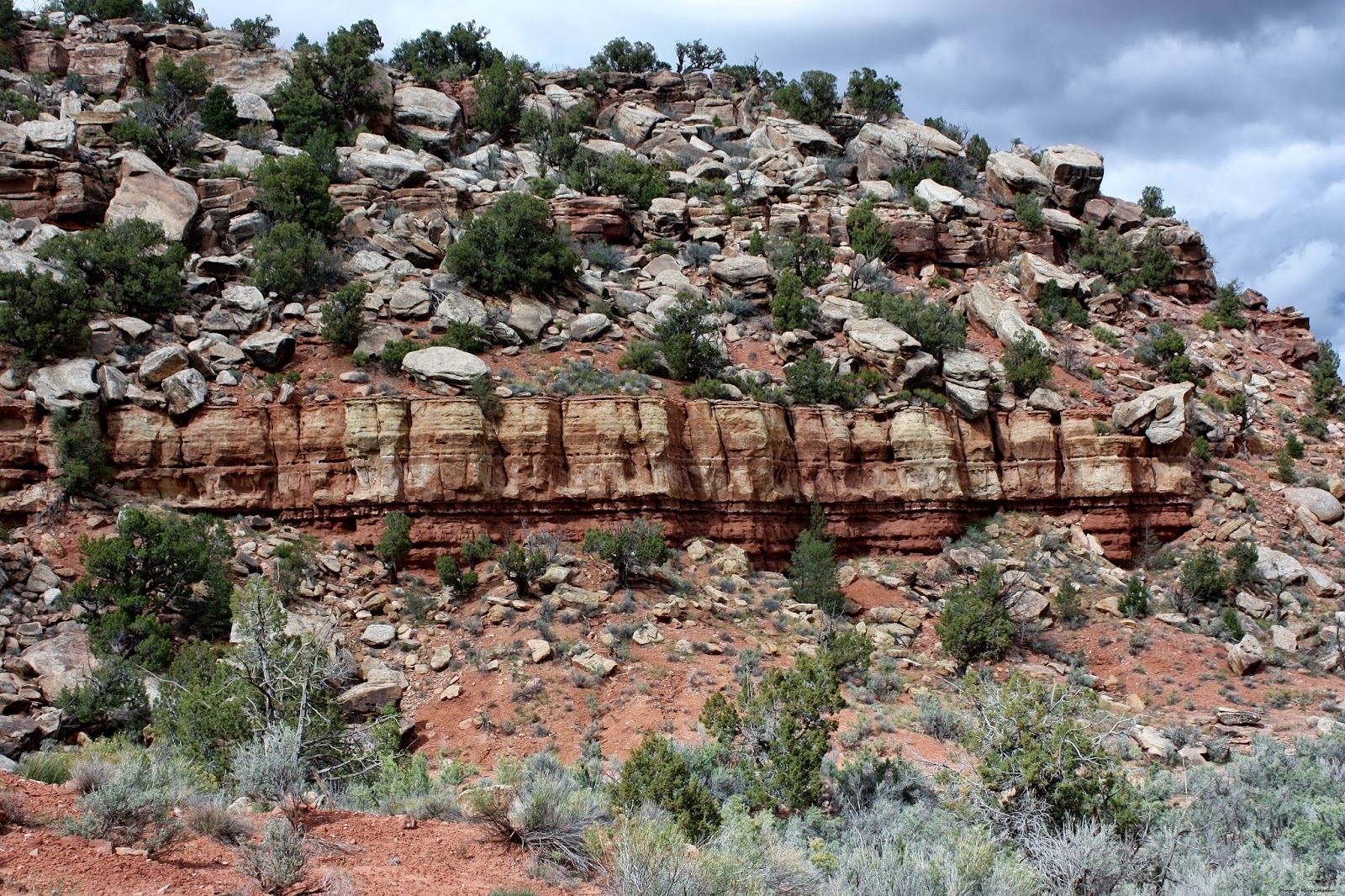 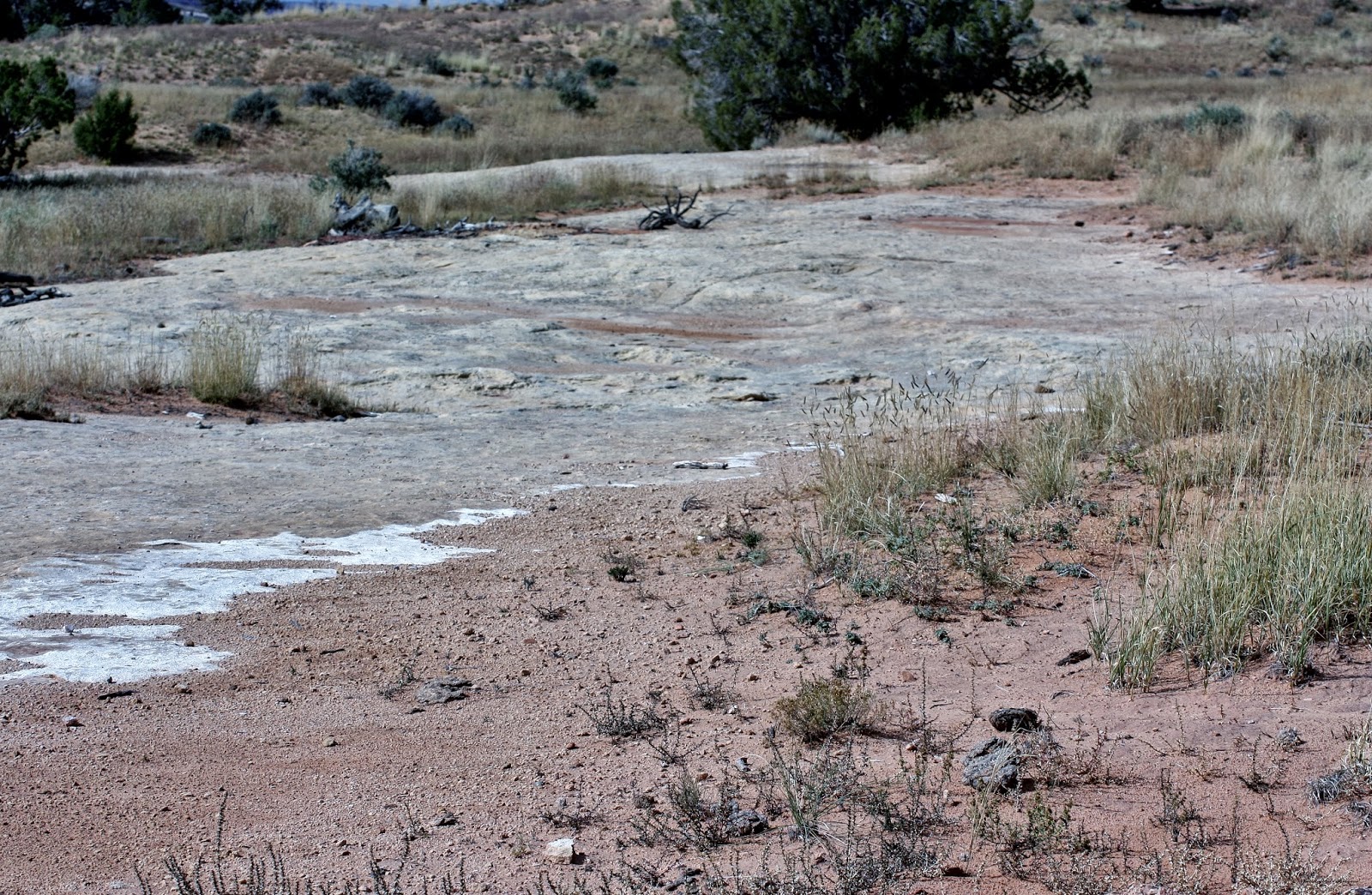 After making a u-turn, we kept looking to see if any of the other dirt trails could accomodate the SUV; we tried a couple, but ended up having to turn back as they were too damaged.  However we finally found an unpaved road similar to the East Canyon Road, and the map gave us a hint that we were now on Peters Wash Road.  It doesn't stay unpaved gravel and dirt for long, but turns to slickrock and sand as we headed further away from the sight of Route 191. 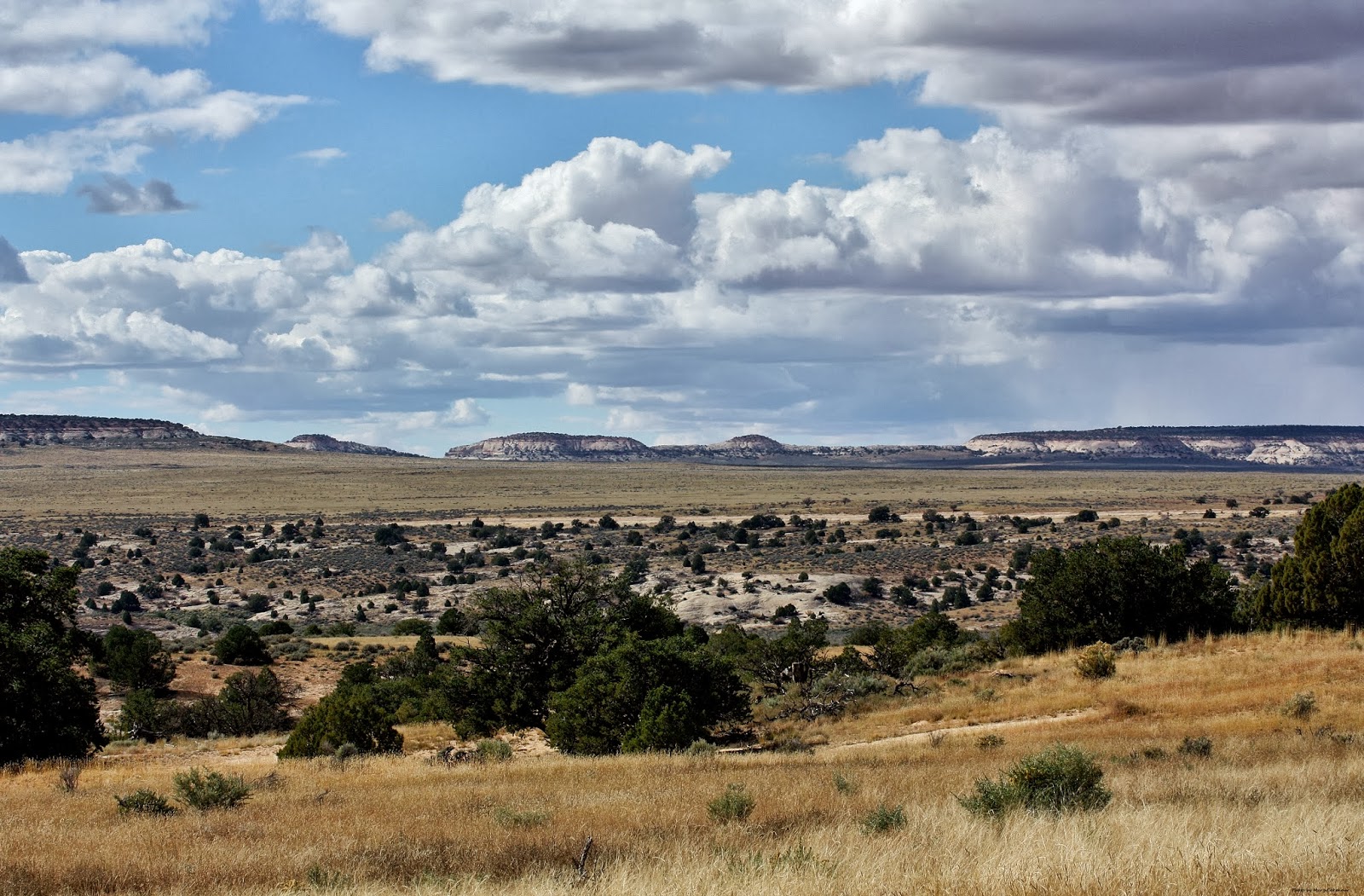 We stopped at one point to look over at Dry Valley; it was an awesome viewpoint! 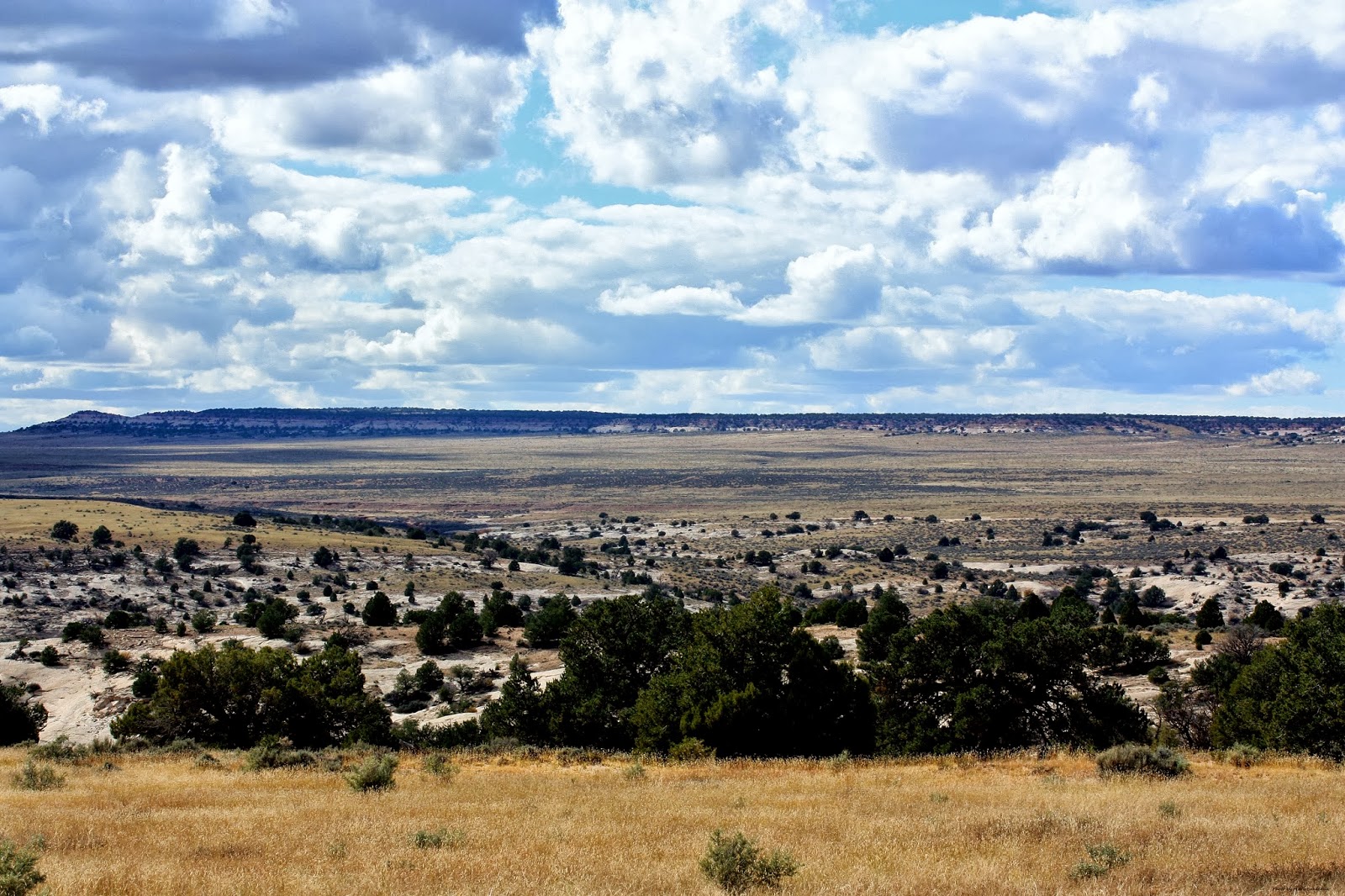 As we drove further we noticed a large whitish mound before us and I remarked how it reminded me of Jabba the Hut from the Star Wars movies.  This is "White Rock"; it might look simple from this viewpoint, but it gets much more awesome as you turn the corner and get to the junction of Peters Wash Road and Lisbon Valley Road.


...and that is where I'm stopping for this part of the adventure.  My next post will be a further viewing of White Rock, and what lies down Lisbon Valley Road.  Till then...

Posted by Mary Cokenour at 2:13 PM