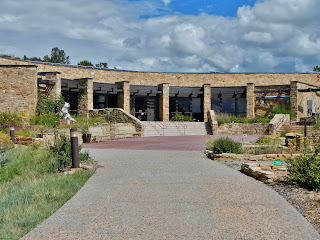 
After four years of driving by the Center and saying, "need to check it out", it finally happened and hubby and I were blown away.  The Anasazi Heritage Center is beautifully done, not just on the outside, but also inside.  Once you've parked your vehicle in the lot, you can walk immediately to the main building which holds the exhibits, including a Pit Structure; or hike the half mile trail to the Escalante Pueblo. 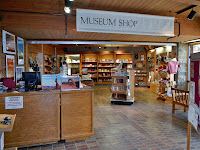 Lets start with the main building with its lovely gardens, sculptures (such as the Chuska Puma pictured above), and exhibits.  The structure is a semi-circle with a large, open lobby and large windows allowing full light inside; the shop area is well lit and stocked with a large assortment of books, apparel, postcards, and various souvenirs. 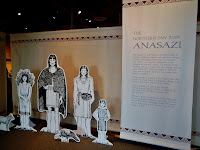 The Main Exhibit Gallery holds well displayed examples of amazing pottery, weaving, apparel, tools and weapons of the ancient Native Americans.  Look for drawers labeled, "Look Inside Me" to find out further information about the exhibits; for example, the reasons behind holes in particular pieces of pottery. 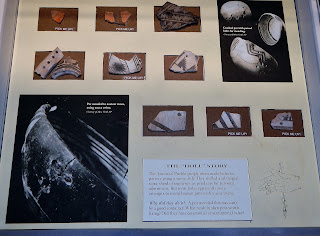 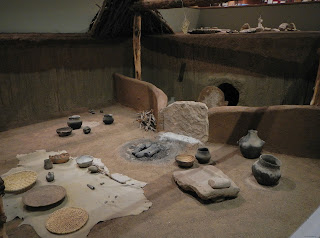 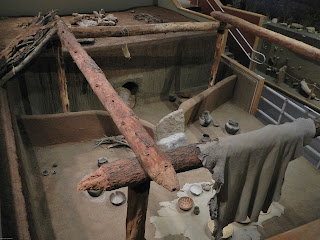 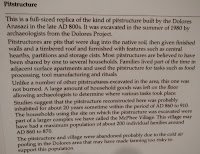 Also in the Main Exhibit Gallery is a replica of a Pit Structure from the A.D. 800s; the original was excavated fully intact and the replica displays what was found inside. 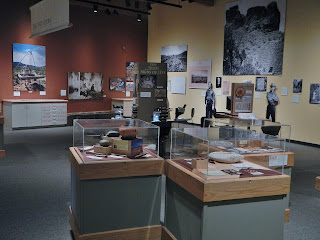 The Discovery Room contains many more "Look Inside Me" drawers along with a center island of microscopes.  The microscopes are used to examine various petri (glass) dishes holding pottery, arrow heads, grain; this enables the viewer to get a more defined look into the structure of these items.  The items in the drawers allow a hands on approach; pieces can be lifted up with informational tags underneath.

There is a Special Exhibit Gallery which holds a specified exhibit each month geared towards science, history or art; also a Theatre and a Multi-Use room for events.

After being "wowed" by the exhibits, it's time to walk the path to the Pueblo ruins; there are picnic areas at the beginning, wooden benches along the entire way, and it is all wheelchair accessible also.  The first set of ruins is the Dominguez Pueblo which is set back amongst the trees and bushes.  This Pueblo was a single family dwelling; unfortunately the earth around the Kiva was unstable, so had to be filled in for safety. 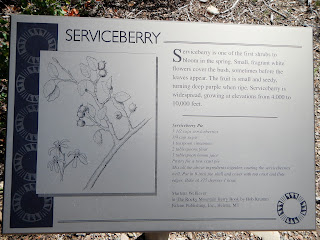 There will be informational signs here and there about the plants, trees and bushes native to the area.  This one on the Serviceberry gives an actual recipe; the signs are not only educational, but fun.

The trek to the Escalante Pueblo is a half mile, winding upwards along the concrete walkway.  Once you get to the actual ruins though, you will understand why the ancient peoples chose this area.  The vistas are breathtaking with views of the Rockies, Mesa Verde, Sleeping Ute Mountain, and the modern day McPhee Reservoir.  Unfortunately, this area of Colorado has been experiencing drought conditions since the spring; so McPhee Reservoir is barely discernible. 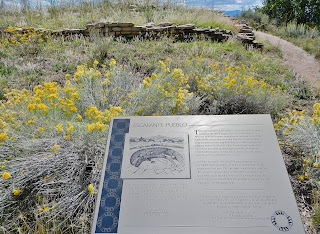 The ruins of Escalante Pueblo are quite impressive; a multi-family structure with a large, intact Kiva.  Wildflowers have been allowed to grow in and around the Kiva; only enhancing its ancient beauty. 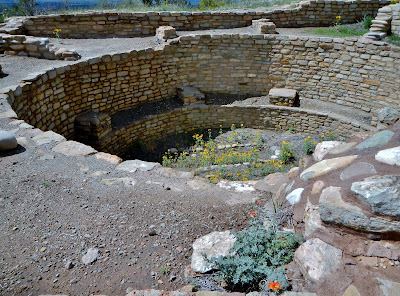