After doing yesterday's write up on Route 550 in Colorado, and seeing the snow on the Rocky Mountains, it reminded me that winter will be coming to Monticello soon. Yes, I know that the fall season has just started, but snow in this area doesn't respect the dates of the Equinoxes.  The earliest snowfall I remember in the four winters I've already experienced was on October 1st of 2009; we had just moved here in May of that year too.  It was only a dusting, but it ended up being an omen of what was to come during the winter of 2009 - 2010...six feet of snow!  That was also the day we adopted Miss Kitty; she was a stray we had been feeding and we came home that night to find her on the door step, covered in snow, waiting for us and her evening meal.  We promptly brought her into the house, dried and warmed her up, and she hasn't left since; she is definitely a pampered kitty. 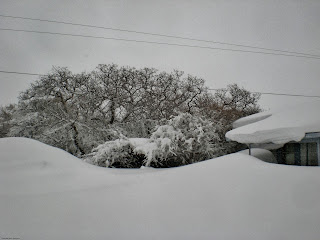 This is a photo of my neighbor's home who was away for the winter of 2009 - 2010.  After the snow had finished falling by April 2010, very little could be seen of his home.  Like many other homes in the area, he lost that carport you can barely see in the photo.


By February 2010, the snow was halfway up the sides of our home.  Snow sliding down from the roof met the snow on the ground and created a tunnel effect.  This view was taken from my kitchen window which faces the west. 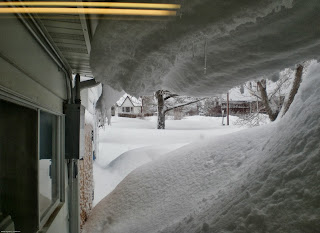 My instinct is telling me that we might have a repeat of this type of winter this year.  We started out with drought in the spring, monsoon season began in July, but changed to torrential rains and flash flooding in August, that had its last hurrah on September 22nd.  Now the temperatures have dropped to 60s during the day, 30s at night; looking very familiar to 2009.  Having a large snowfall is good for our area as the melting snow pack will fill lakes and reservoirs (much needed and used for local water).  By the way, we seem to have two types of snow fall: flakes and pellets.  Now I'm used to the typical fat flakes that fall and you try to catch with your tongue, but pellets?  The first time I experienced this, I was totally fascinated; how could snow fall in almost perfectly round balls?  I collected it, played with it and proved that being an adult was very overrated. 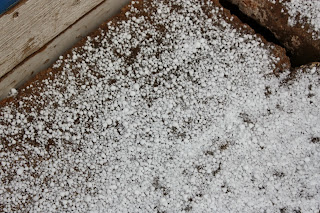 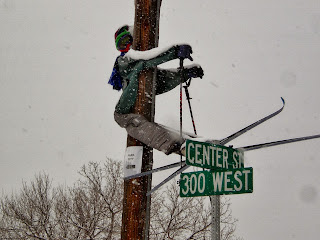 Snowfall, that's the big plus; but the biggest con is that many restaurants and other local businesses close up for the winter months due to the lack of visitors to the area.  Why?  The lack of facilities to promote, organize and maintain winter sports...snowmobiling, skiing, ice skating, snowshoeing, cross country skiing.  At one time, there was a ski lift of sorts, but closed down due to the high cost of insurance; that's what I've been told by some locals who remember it.  Makes you wonder though, how do other places maintain such a small facility, like Ski Hesperus, located on Route 160 in Hesperus, Colorado?  Having winter sports in our area would bring in visitors, would bring in revenue, would allow businesses to stay open during the winter months and keep their employees in paychecks.  Novel concepts that I believe actually scare folks. 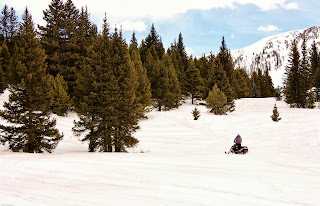 I think that for the rest of this write up, I'm going to post photos, give a brief description and entice you with the idea of coming to the Monticello, Utah area; to take advantage of this beautiful area during the winter; to take advantage of our snowfall even if no one else around here wants to promote it. Think of it this way, even if I'm wrong (what!?!) and we don't get a snowfall as we did in 2009-2010; hiking and climbing will still be an option, and the National Parks do not close...just wear warmer clothing. 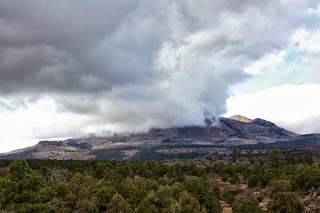 Dark clouds moving over the Abajo Mountains and eventually over the town itself?  Batten down those hatches, make sure you can reach the wood pile easily, snow be a coming.  The scent in the air begins to change also, cleaner, crisper, the ozone just a bit tangier to the nostrils. 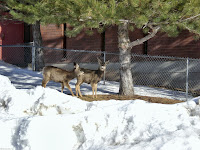 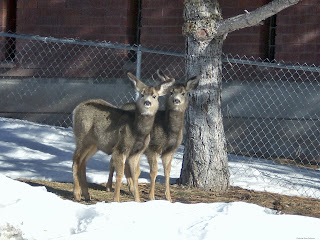 The local mule deer take advantage of an open spot in the snow to feed on whatever greenery may be available. Talk about big egos; look how they pose for the camera. 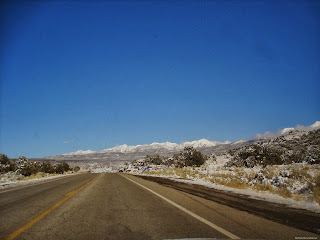 Now if we had more winter sports up in the Abajo Mountains, besides employees for this genre, we would make sure the Department of Road Maintenance kept busy keeping the mountain road open, instead of laying off for the winter.  The Welcome Center would be selling maps of snowmobile trails and cross country skiing areas; snowmobile sales would be up, not just snow blowers.  Hotels/Motels booked; restaurants selling hot meals and beverages; and there I go again scaring folks with my novel ideas.

When snow falls in the desert and lies against the sandstone, the effect is amazing; talk about a wonderland! 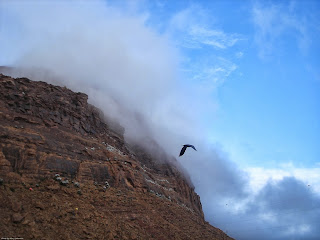 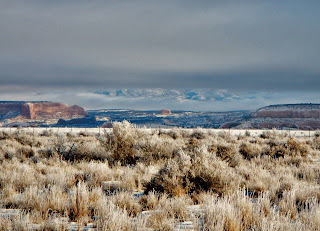 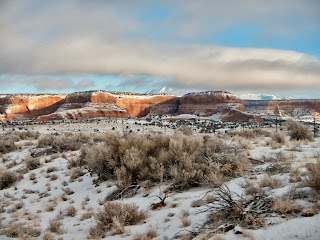 So here is the gist of it, during the winter, San Juan County, especially Monticello and the Abajo Mountains, is an amazingly awesome area to visit.  It needs to be promoted, accessed and used for the utmost of pleasures in winter sporting.  Those are my opinions and thoughts, and I'm sticking by them; as to the naysayers, when you wonder why the young people want to go elsewhere because of lack of employment; when you wonder why there are little to no funds in the sales tax coffers for town expenses...?