Arizona's Canyon de Chelly is a MUST Visit. 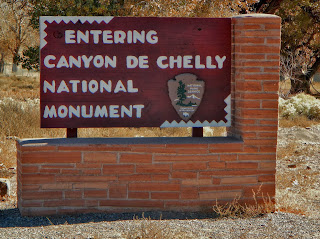 December 26th, my birthday; so what more perfect of a day than to write about my first visit to Canyon de Chelly, located in Arizona.  Awhile back, I wrote about the adventure down Route 191 just to get to the entrance of this National Park, that was your travel appetizer.  This write up on the North Rim of this park will be only part of your main dish; once I get to the South Rim, you'll get the rest of your meal.  The visitation time estimated, in the brochure you receive at the park, of the North Rim overlooks alone is about one hour; don't believe it if you're like me and my hubby who love to explore and take photos.  We were there for almost three hours, and that's without going on any of the guided tours offered; just exploring the three overlooks. 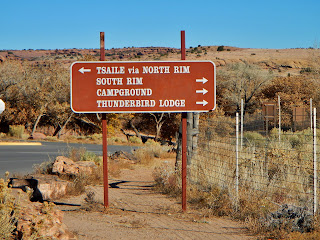 Canyon de Chelly is free...zero, zip, no entry fee; make sure though to stop at the Visitor Center and get a map of the area.  The North Rim is Route 64 and the only turn offs you should be making are to the overlooks; this is a populated area, so don't be trespassing onto private property.  Oh, while you're at the Visitor Center, take a look at the Hogan that is built outside; it gives you a good idea about the style of the Native American home. 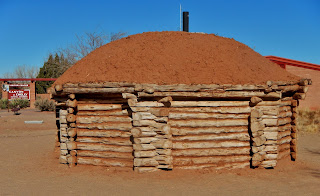 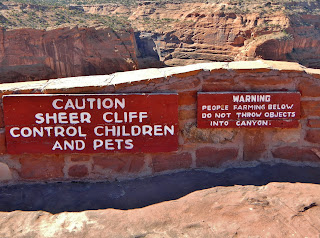 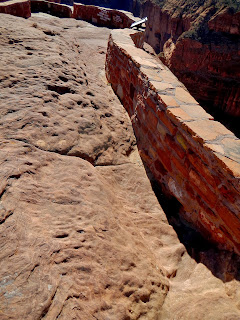 By the way, once you park your vehicle in the parking area of each overlook, a sign will warn you to take all valuables and you will have to walk over rock and dirt; there are no paved walkways to the overlooks.   Do NOT bring any pets with you and hang on to children; while there is a short (very short) rock wall around the designated overlook itself; the surrounding cliffs are open to air and a very long fall to the valley below.

There are little footprints pressed into some of the rocks to help guide you to the overlooks; some are painted, but mainly worn. 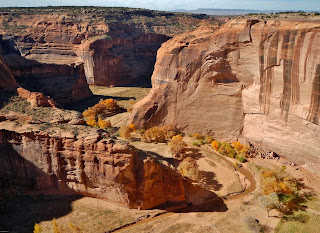 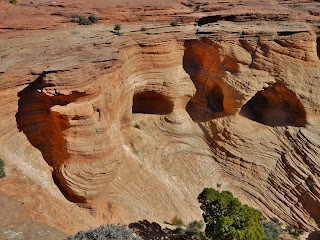 The first overlook is Antelope House; aptly named for petroglyphs (rock art) found in the area of antelope.  The valley below is lush and lovely, with farming still going on and you will spot homes for families that still live in the area.  Not for anything, but Roy and I both felt it would not be a bad thing to live in such a beautiful place.  On the other side of the overlook are sandstone walls lined with caves, didn't notice any ruins inside any of them, but they're still interesting to see. 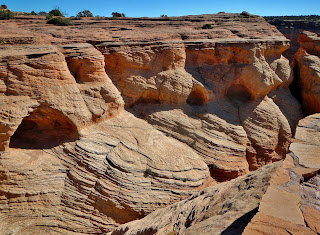 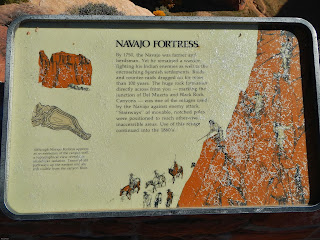 Do not be too quick to go back the way you came to the parking area; trek over the rocks to another overlook that isn't marked on the map, but you will see "Navajo Fortress" mentioned though.  Navajo Fortress is a huge sandstone formation that divides Del Muerto Canyon from Black Rock Canyon (site used in the 2013 film, "The Lone Ranger").  Again, you can see how lush the valley is, and a homestead at the opening to Black Rock Canyon

So, while the brochure said that the North Rim takes about one hour; we managed to spend an entire hour just at these two locations.  There were also a couple of Navajo women selling jewelry and pottery at the parking area; Roy purchased a beautiful black and white vase called "Horsehair Pottery"; a technique that creates fine lines by burning in the hair from the mane of the horse, and thick lines from the hair of the tail. 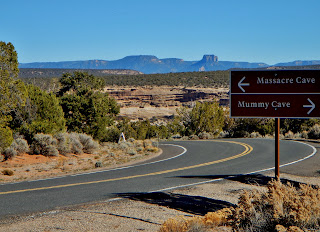 The next two overlooks are very near each other, Mummy Cave and Massacre Cave.
Don't cheat yourself by just concentrating on seeing ruins; stop and take a good look at some of the natural scenery.  The balance between rocks, sands and natural greenery is serene. 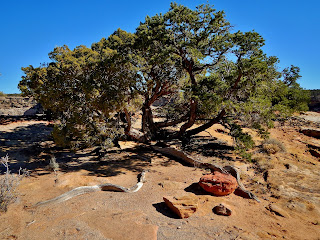 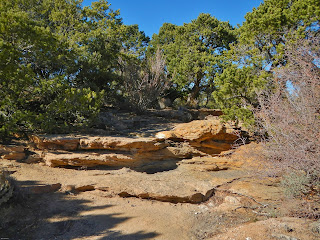 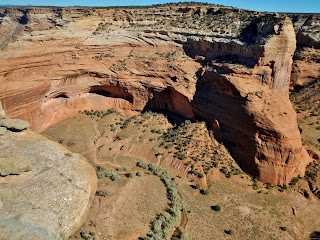 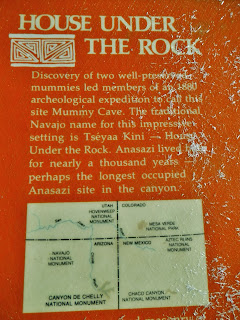 Mummy Cave Overlook; so named for actual mummies found in the area.  You will find yourself being drawn towards the cliff edges, not just to get a better view of the ruins, but to look out as far as you can see.  Talk about being at the top of the world! 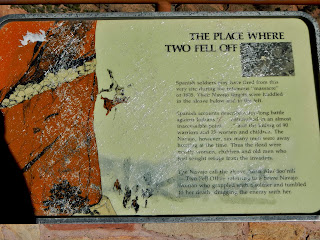 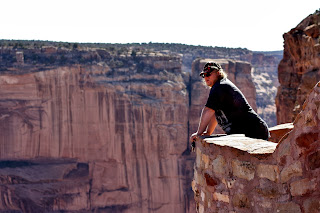 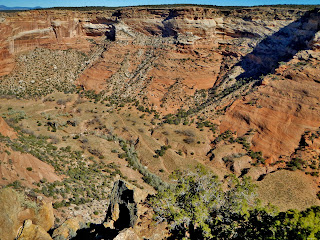 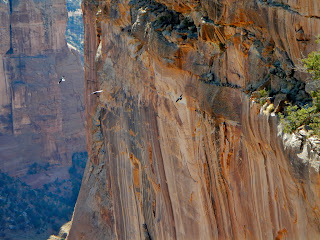 While at Massacre Cave Overlook, we were treated to an aerial show; adult ravens teaching the younger ones to fly; to ride the wind, soaring upwards, or jetting into the valley and pulling up in time not to crash into the ground below.  At times they hugged the cliff face so tightly, they looked to become part of the rock itself.  It was an enchanting site to see. 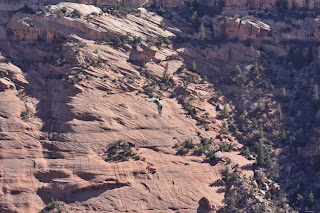 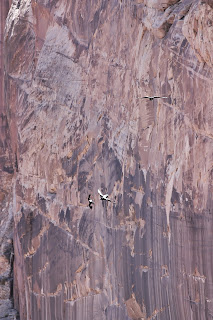 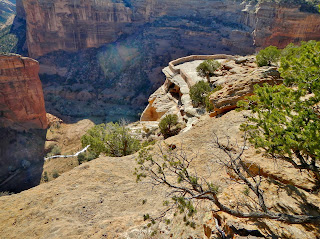 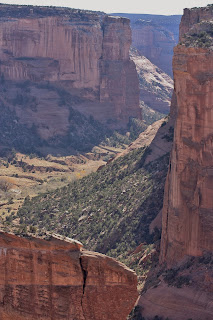 While wandering around, we both noticed another overlook, but it was not indicated on the map. Curious, we began climbing downwards over the slickrock; the valley below was gorgeous. We could see people standing at the Mummy Cave Overlook, so knew the ruins were just around the jutting rock wall before us. 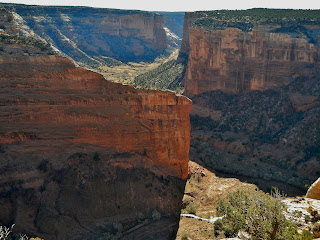 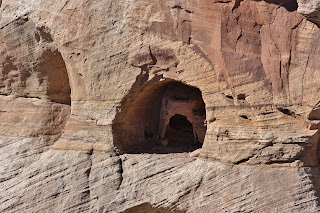 As I was taking the valley photos, Roy continued walking around the overlook wall and suddenly called to me, "Hunny, I know why this overlook is really here". Going to his side, he pointed out the ruins against the sandstone cliff face; according to the map, these ruins were "Yucca Cave". Not as well preserved as the other sets of ruins, and there was one oddly shaped structure that resembled an oven. 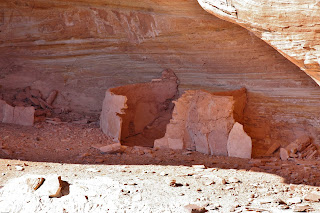 ...and there stops our trek along Canyon de Chelly's North Rim.  Talk about exhausted; it took us three hours to get there, three hours to enjoy it; one of the best six hour work outs we've ever had!  Unfortunately, winter came early to our region, so until the spring thaw comes and the temperatures hike up to allow t-shirt wearing, the South Rim will have to wait.