Now while Main Street in Moab is always packed during tourist season, there are some other roadways that, while not packed, can be often busy. Potash Road (Route 279) is definitely a busy place and no wonder why: petroglyphs, arches, dinosaur tracks, canyons, Colorado River, sheer vertical walls to climb, campsites, and the workers going to and from the Potash Foundry at the end of it...or is it the end?  I'm not going to keep you in anticipation for this post; past the foundry is a boat ramp, the paved road ends and becomes a "must use 4 wheel drive vehicle" type of roadway.  It leads through a section called the "Shafer Switchbacks" and eventually to Shafer Basin within Canyonlands National Park; I haven't done it, so cannot give too much detail about it. 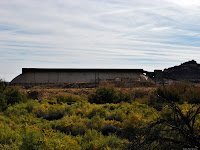 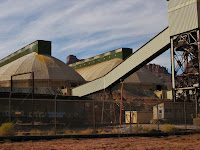 From the Anticline Overlook, you can see the foundry and the road that continues beyond it to the switchbacks.  Since I am writing about that area, I might as well give you a couple of photos of the foundry, so if you go to Anticline, you'll know what I'm referring to. 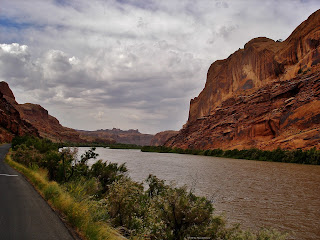 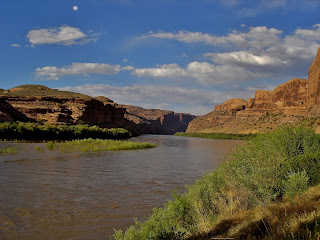 Wow, I certainly started this post "bass ackwards", so I'm going back to the beginning, basically because you can't get to what I just wrote about without doing that.  Potash Road is just a few miles past the bridge crossing over the Colorado River after you leave Moab...I'm going to use this as my main focal point for getting there.   Most folks don't simply see the road coming from the other way and say, "hey lets check it out"; namely because they don't know much about it yet.  Once you get past the newly "renovated" area (that's where they dug up the old uranium tailings and removed them), you'll notice that you're driving parallel to the Colorado River.  On both sides are mountainous walls of sandstone; by the way, that other road you see across the river, that's Kane Creek Blvd (Road), and you'll want to do that road at some point in your visit to Moab. 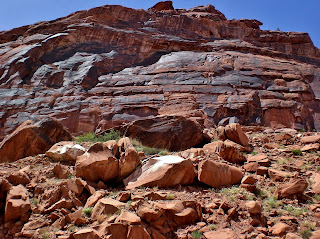 As you drive along, you'll see many inclines with fallen boulders, cacti and various other plant life growing along rocky shelves. If you're adventurous, it won't be surprising to find yourself parking your vehicle, and attempting to climb, climb, climb.  There are caves here and there, and from the Kane Creek Blvd side you'll see "Little Arch"; it's more difficult to see it on the Potash Road, since it is so high up on the sheer wall. 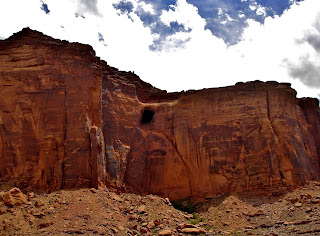 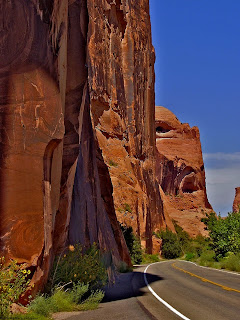 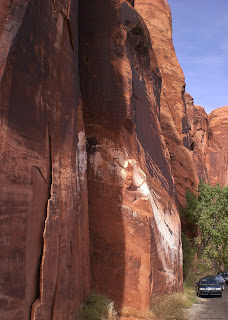 The section visitors to Moab find most fascinating is "Wall Street"; sheer faced, vertical walls that are constantly full of climbers, most using ropes, but some attempt free hand. Drive slowly along this stretch as sometimes they're so into their own excitement, they forget there is a roadway directly behind them. 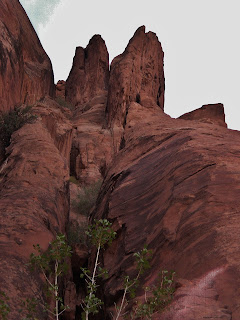 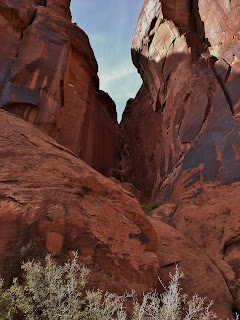 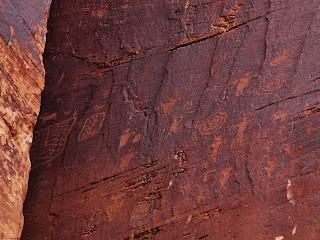 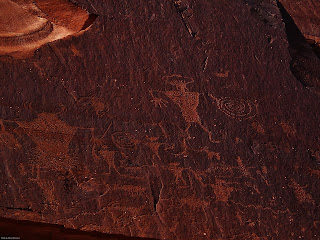 This area also has a large amount of petroglyphs on the walls, so don't be surprised if you have difficulty finding a place to park. You will have to leave your vehicle to see them; look, photograph, don't touch and don't leave your own markings. 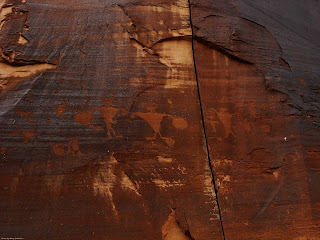 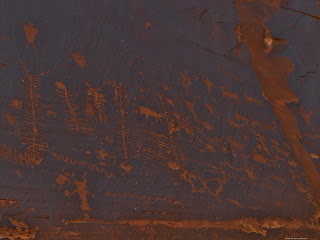 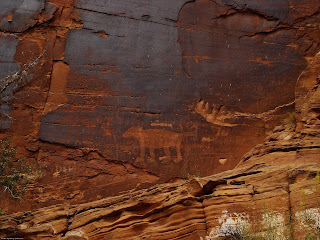 This set of petroglyphs is located further down the road from "Wall Street"; a sign was finally put up to mark their location.  There used to be a load of greenery blocking them; Roy and I found them only because we decided to climb the rock shelving.  You can only imagine our surprise when we looked on the wall and found these beauties!  It truly irks me when someone wants to drive around and only see what they can see from the comfort of their vehicle; they're missing out on so much, and why are they in this area in the first place is my main question?
﻿
﻿

Now I did mention "Little Arch", and then to indicate the opening to Long Canyon, you'll see "Jughandle Arch"; when you see a huge metal storm drain pipe (large enough for a person to walk through), then you're near the trail to Corona and Bowtie Arches.  Camping?  There are campgrounds along both sides of the road, some with facilities and some labeled "primitive", or in other words, no water or electricity. 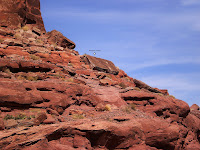 Poison Spider Mesa can be reached via, what else?, Poison Spider Trail; 4 wheel drive vehicle, bicycle, motor bike or hiking.  So, in the parking lot is a restroom area; look east from the restrooms and you'll see this large, flat boulder sort of leaning against the rocky incline.  Dinosaur tracks!!!  That's right, there are dinosaur tracks on the flat side of that boulder; you'll have to walk about 600 feet across the rocky terrain as there really isn't much of a trail to it.
Now I have mentioned in several of my posts that I love to climb around the Red Rocks.  One day we stopped here to use the restrooms, and while my hubby was still inside I began to wander around...and then up and up and up.  Roy emerged and looked all around for me, and then suddenly got the idea of looking up.  Lets just say that when we're in a rocky area, and I've "disappeared", he now knows to look upward first.  I was about 3/4 of the way up to the Mesa, but I didn't make it all the way to the top; and that is strictly my fault as I let doubt overtake me.  Roy knows I'm a good climber, but sometimes gets nervous and begins yelling at me about how I'll fall, or lose my footing.  I let the doubt creep in and knew if I continued upward, I would probably over think my footing and misstep; so I did the smart thing and climbed back down.  I'm telling you this not to embarrass myself, but to help you understand that you need to be careful when climbing around the Red Rocks; it's not a simple playground of monkey bars and sandboxes. 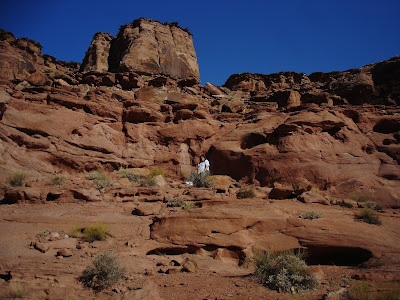 Which leads us to the foundry, the boat ramp; and depending on your vehicle, how much gasoline you have in it, and your adventurous spirit, to the Shafer Switchbacks.  If you just intend on driving along Potash Road for sightseeing and not much else, it should take you a couple of hours to complete.  That would definitely give you enough time to find Kane Creek Blvd and do the same thing on that road.  Personally, doing it all, up close and personal, is more enjoyment than just driving around and sitting on my butt; then again, that's just me.
Mary Cokenour