Finding the Grand Canyon by Accident.

After residing in the Four Corners area for a year, it came to mind that I had not been to Arizona yet. Stepping on the Arizona side of the "Four Corners Monument" didn't count in my book; I wanted to be in the actual state and see something of it. So, I'm going to begin this travel post on the Arizona side of the Utah-Arizona border in Monument Valley.  "What!?!", you're yelling, "You're not going to write about and post photos of Monument Valley!?!"...patience grasshopper; all in good time.  I will however, post two photos of monuments you will pass by on Route 163; Agathla Peak (aka El Capitan) and The Owl.   Agathla Peak is sacred to the Navajo and the name is taken from a word in the language which means "much wool"; the monument is approximately 1500 feet in height and is a eroded volcanic plug.  This monument fascinates me because of its similarity to the "Black Fortress" in the movie "Krull"; The Owl is so named for its similarity to the bird.

Traveling south on Route 163, the landscape is typically desert; sparse vegetation, sand, sandstone, an interesting formation here and there.  Even though the type of stone may change from area to area, it will keep its desolate atmosphere.  The first town you will reach is Kayenta, at the crossroads of Route 163 and Route 160; make sure your gas tank is filled, and you have plenty of bottled water; if you're hungry, fast food is basically the only thing you'll find.  Hint, McDonald's is a NO!; the Burger King and Sonic, while over priced, are still better choices for service, food quality and cleanliness.   At the crossroads, go west onto Route 160 and you'll be traveling on this roadway until you reach its ending at the junction of Route 89.  Keep a lookout for interesting sites not indicated on any maps, such as Native American ruins in the cliff (north side) near mile marker 394.  I found these by accident too; I was playing around with a new zoom lens my hubby bought me, just because, and spied these ruins.  The shoulders of Route 160 going through Arizona are very tight, so we had to park a little ways down, and I carefully walked back to get some shots of these ruins.

Driving along, we're around Tonalea and see these really tall and strange looking gray formations; I glance at a map and see the name "Elephant Feet".  These sandstone pillars (5502 feet above sea level) are grayish white instead of sandstone's typical brownish red; giving the illusion of an elephant's feet and lower legs. I'm posting two photos of them; my hubby, Roy, is in one and this will give you a good idea of how massive these pillars truly are.

By the way, remember I just said I "glanced" at a map; that's how we found the Grand Canyon by accident...not reading a map, just glancing at it.  You'll understand as this story progresses along. 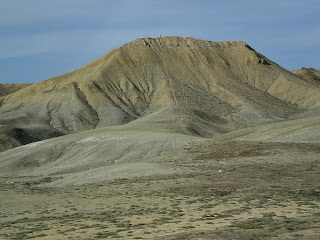 As I stated before, the landscape is desolate; gray adobe hills breakup the monotony and you can see trails left by ATV adventurers upon them.  Perhaps a lonely horse is strolling around hoping to find some type of greenery to munch on. 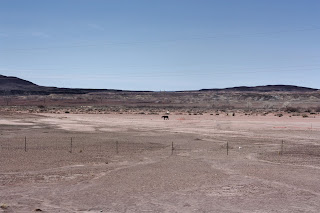 We stop in Tuba City to gas up and decide that we will follow Route 160 until it ends at Route 89; then turn around and make our way back home again. That was the plan..."was" being the key word. Now as we ride along, I begin seeing on the sides of the roadway these little canyons and I remark to Roy on how they look like "mini-Grand Canyons".  At the end of Route 160, the junction of Route 89, is a large green sign that says, "Grand Canyon, South Rim, North Rim" with arrows pointing to the appropriate direction. We both look at one another with "what the heck?" looks, pull over and read the map this time, not just glance at it. Holy Moly!!! We're practically at the Grand Canyon!!! That's right folks, we had no clue, no idea at all that the routes we were traveling were leading us to one of the meccas of National Parks...The Grand Canyon. Talk about a "Duh!" moment. 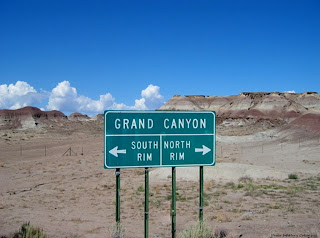 Did we turn around and go back home?  Hell no!  We flipped a coin and made the left turn to the South Rim; and that is how we found "The Painted Desert".  The Painted Desert extends from Cameron-Tuba City southeast to the Petrified Forest, roughly 120 miles long by 60 miles wide (about 7500 square miles). The hills are composed of stratified layers of easily erodible siltstone, mudstone, and shale of the Triassic Chinle Formation; the colors come from abundant iron and manganese compounds. They're simply fascinating to look at! 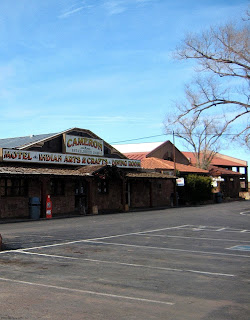 Before making the turn onto Route 64 towards the South Rim of the Grand Canyon, make a stop at the Cameron Trading Post.  Besides the main building, there are smaller shops within the adobe buildings featuring artists.  There is also a hotel connected to the Trading Post, so you can always stay there if getting into the Grand Canyon's hotel was impossible. 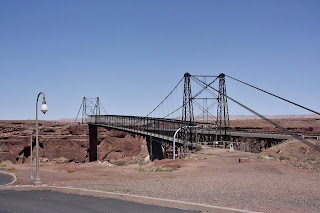 So, just by wanting to step into Arizona and see a little bit of it, we found a cliff dwelling, elephant feet, a painted desert and the largest canyon in the United States. If you think about it, this little road trip ended up being one giant, happy accident...and off to the Grand Canyon, but that story is for another day.