Going through my thousands of photos taken over the past seven years, I still find a photo here and there of Arches National Park and wonder, "what the heck is that?".  As I research the section of the Park I wish to write about, I usually, by accident, find a photo resembling one unknown one I have and bingo!, I've got a name.  So while my intention for this post is to focus on the Fiery Furnace and Salt Valley Overlook; I'm going to throw those odds and ends in here.

Fiery Furnace and Salt Valley Overlook are past the Delicate Arch area, and on your way to Devil's Garden.  They are the type of sites you come up on unexpectedly, hit the brakes and hope no one is tailgating behind you.  The Overlook is basically a view of Salt Valley Wash; there isn't truly much to see there in way of formations, but it is still an awesome site to look over.  There is an eight mile, unpaved and bumpy, road that leads over the Wash to Klondike Bluffs; a car will make it over, but 4 wheel drive is the better way to travel.
﻿﻿ 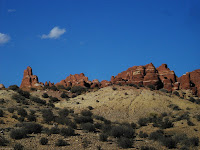 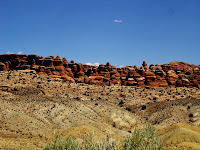 Now the Fiery Furnace is a truly Holy Moly! site to stop and look at.  The Furnace is two miles of narrow canyons and fins of sandstone; the marked hiking trail can take from 2.5 to 3 hours; and that is using the highly recommended tour by a park guide.  You can go it alone, so long as you purchase your permit; however reservations are required (alone and tour) and must be made online at: http://www.recreation.gov at least four days in advance. I'm warning you now that during tourist season (April through September), there could possibly be a waiting list to get a permit, or be included in one of the guided tours.  During the hottest months of summer, I recommend taking the earliest tour possible as while it is cooler in the Fiery Furnace (ironic, isn't it); the rest of Arches will be extremely hot when you finish the tour. 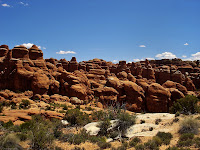 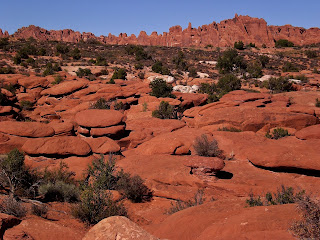 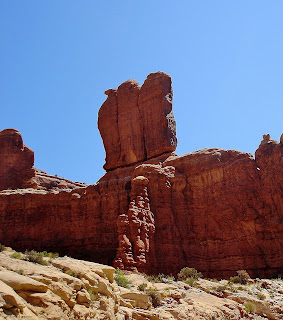 That takes care of Fiery Furnace and Salt Valley Overlook; now to get to those Odds and Ends I found. Lets start at the beginning, the beginning of Arches National Park that is. After you pay your entry fee, you'll be able to look upwards and see that you're being greeted by three gentlemen wearing tuxedos. Well, if they were living creatures, that is usually how they're referred to, but these are actually stone giants called "The Penguins". 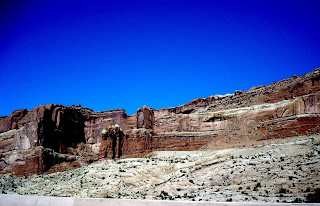 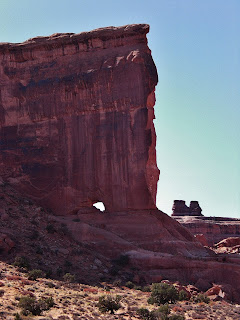 Now this next item I first saw mentioned when doing some research on the internet about the La Sal Viewpoint section of Arches. I didn't really think anything about it though, as I was concentrating on finding the best photos of the area itself. While I was organizing photos, or attempting to, I was surprised to find I actually had a photo of this minor arch...Ring Arch which is located at the base of Courthouse Towers.  It is one of those, blink and you miss it things if you're driving along; you have to stop, look and find it.


My last, " I can't believe I have this photo" is of Pothole Arch, located in Ham Rock which is part of the Windows District.  It is one of those arches that someone in your vehicle has to spot and say, "hey, is that an arch up there?"; otherwise you'll just drive by without even noticing it.  On the Arches National Park map, Ham Rock is mentioned, but not this arch; isn't that odd?  But then again, Ring Arch is not mentioned either...perhaps there are so many arches at the Park, all the names can't fit on the map?  Think of it as a treasure hunt for gigantic items; make sure to write the names down on your map as close to their location as possible.

That's it for this post about Arches; all I have left is Devil's Garden and that will most likely be a two or three part story; that section in itself is immense!  I hope you've been getting a good idea on why I've stated that you need a minimum of one day dedicated to visiting Arches, and you still might not see it all.