Looking northward from Anticline Overlook, visitors will see a rather interesting site; a line of sandstone featuring arches, caves and a parade of elephants. How correct they would be as this is the Cove of Caves, Windows District and Garden of Eden section of Arches National Park as seen from miles and miles away.   After visiting Balanced Rock, there is a paved road nearby leading to the right and this will take you to this mysterious place.  The background photo I use for this blog (behind the title) was taken at a pull-in area only minutes from the main road. 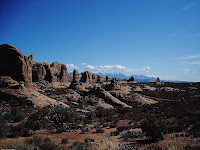 ﻿﻿ The Garden of Eden is a collection of sandstone spires; it's not unusual to see ropes hanging down, climbers attempting to be "on top of the world".  Two of the formations are said to resemble "Adam and Eve", hence the name given to the area.

Continuing along the paved road brings you past the "Cove of Caves", aptly named due to the cave like indentations in the sandstone walls.  Eventually the largest of these alcoves will erode into an arch; when is a good question and it all depends on the elements of wind and rain.

The best is yet to come as you reach the Windows District (North and South Windows), Turret Arch, Double Arch and the Parade of Elephants.  Not only is there so much to gaze and wonder upon, but you can hike up and around the North Window via a primitive path.  The primitive path is over the sandy desert to the far sandstone wall; there is necessary climbing over boulders; the view is amazing and the coolest wind blows through.  It's a pleasant place to sit upon one of the larger rocks, enjoy the view and breeze, before continuing the hike to North Window where you can walk through it to the paved pathway leading back to the parking area.  The North and South Windows are also referred to as "The Spectacles" with the wall between them as the "Nose Bridge".

From the parking area by Windows, you can see "The Parade of Elephants" where Elephant Arch makes the opening between the "legs" of one of the stone creatures as they march in formation.

Then there is another famously photographed arch, "Double Arch" which technically are not arches at all.  They are actually a perforated sandstone fin and a giant pothole that finally lost its bottom; but who cares, they're beautiful.  This arch has also been referred to as "Double O Arch". 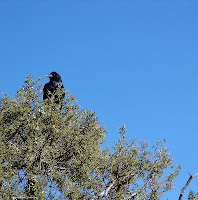 While you are photographing and gazing at the various arches; don't be surprised if one of the locals flies in to tell you stories from its own perspective.  The Raven is very talkative and informative; it will fly away when it's finished wearing down your ears as fast as it flew in.  This tour guide is unpaid, and doesn't mind showing you around.


That takes care of this section of Arches National Park; do NOT miss out on it.