It is almost a year since I wrote about the mammoth carvings at Sand Island In Search of Sand Island's Mammoths - Part One .  2018 was not a very good year for either Roy or myself; illness, financial hardship; issues with people who, in general, were simply reliving high school as the "mean clique".  2019 was dubbed the "Year of Fresh Starts", and it certainly has been for the most part.  Recently we both were given fresh starts with employment, and now have time for each other, and important aspects of our lives that kept getting pushed aside.  Basically, we are back on the road to wellness; wellness in mind, body and soul.  Enough boring talk, let me get onto telling you about Sand Island's Mammoths.

It was one week, after our first attempt at mammoth hunting, that we returned to Sand Island , determined to find the other mammoth.  This time we had a copy of a photograph which showed the carvings and other rock art colored in.  It would help us go back to the first mammoth which was more visible, and follow the rock art along the wall to the second mammoth. The pock marks simply look like weathering over time; the colored in photo shows how the marks were interpreted.  Easier said than done as this wall is very pock marked, so even with a zoom lens, finding the figures was still difficult.

Many of my photos are repeats from Part One, just taken in a different light; it was a cloudy day this time.  People often think that going adventuring is determined by the weather.  No, it is determined by how much one wants to do the adventure.  As you read through this travel blog, you will notice that Roy and I have visited places on sunny days; in snow, rain, cloud cover as well.  However, we are smart enough to know the dangers certain weather conditions can bring, so we won't be in areas of possible flash flooding, and no mud fests for us! 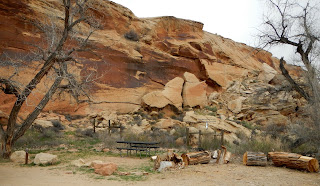 The trail to the carvings, and other rock art, is at the last camp site, along the same rock wall as the ranger station.  Yes, people might be in that camp site; just be polite, say hello, and keep walking to the log posts that indicate the start of the trail.  Now don't go wandering through someone's camp site to get there.  Park at the ranger station, walk along the trail for vehicles, and you'll see those log posts at the end of it. 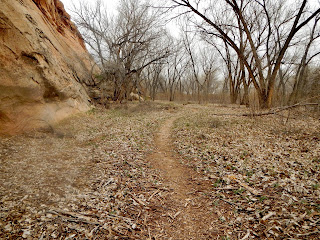 You will have to walk downward just a few feet, but then the trail evens out, and it is an easy walk for a half mile where it meets the San Juan River. 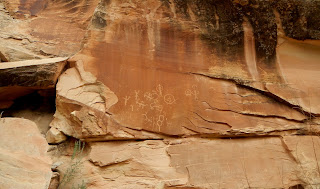 The rock art show begins almost immediately, and there will be other interesting sites along the trail.  Keep those eyes open, cameras at the ready! 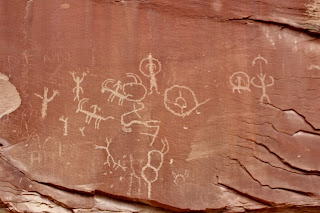 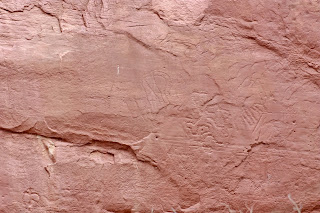 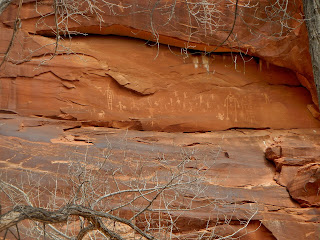 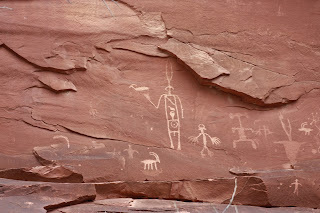 Warning:  if you are easily offended, don't look at these humanoid figures too closely.  Their gender is definitely expressed in the drawings. 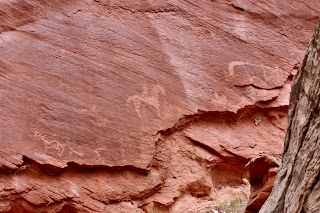 Men on horseback, wearing hats?  The Spanish came through San Juan County, then came the Colorado and Texas ranchers, and finally the Mormon pioneers. 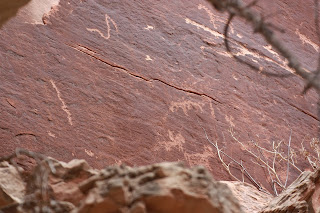 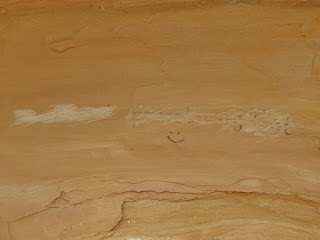 Unfortunately, you will come across "idiot markings".  Pristine sandstone walls, or ancient rock art itself, marred with initials, names, drawings from 20th and 21st century humans.  Why?  Well that's why I call them "idiot markings", the people who do this are, and I'm being nice here, idiots.  They seem to think that all rock art is just graffiti, so no one will care if they add to it, right?  Wrong!  Oh, and please don't give me the argument of, "Well, they didn't know better."  That's a huge load of bs right there; information is available online, on informational boards at sites, and basically every visitor center and museum in the 4 Corners region.  Ignorance is definitely no excuse! The ancient rock art/drawings are how these people communicated, left messages for others, wrote out their own history.  Modern man used paper, ink, pens; created bound books; and nowadays the written word of any language can be found digitally.  So, look, take photos, admire, but don't touch!
Back to the real art work of Sand Island... 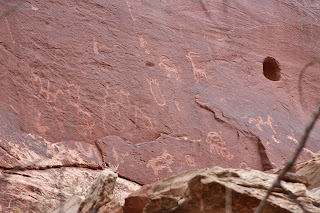 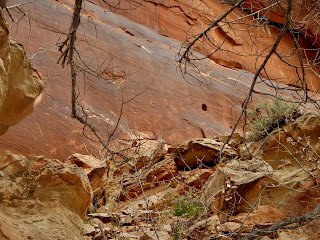 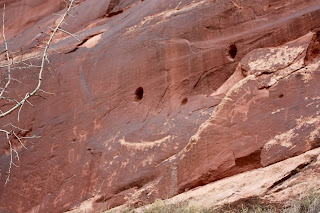 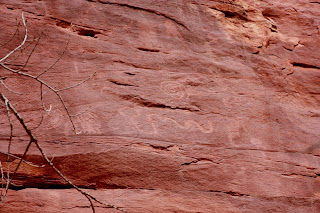 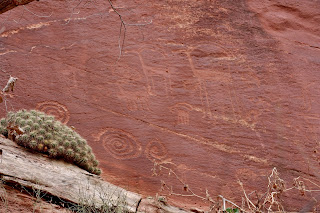 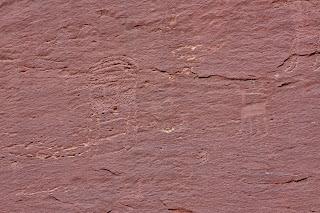 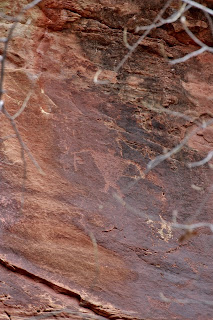 I found these next drawings to be truly interesting.  The triangle shaped humanoid is indicative of the Fremont culture, with similar drawings found in Shay Canyon, Capitol Reef and Nine Mile Canyon. 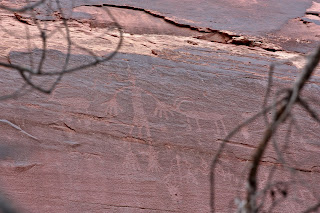 The humanoid figure with the long fingers and toes is similar to the figure found at the Wolfman Panel, found in Comb Ridge.  (Yes, I've written about these sites, just use the Search box on the upper right of any blog page and prepare to have your mind blown!) 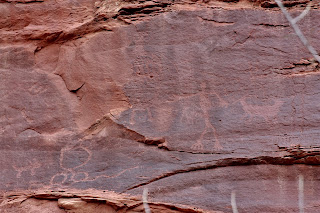 So I mentioned there would be other aspects of Sand Island to see and admire. 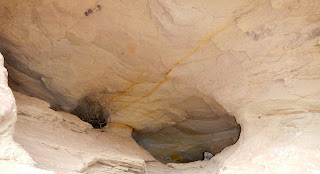 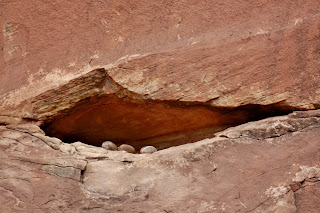 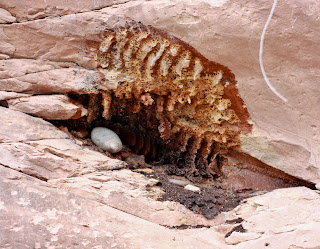 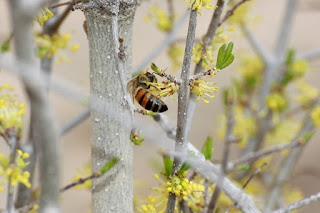 At this point in time, you're wondering, "Where are the mammoths!?!"  Well, like any Travel Channel show or documentary, there is the tease at the very beginning, but you have to watch the whole telecast to get to the really good part.  Speaking of Travel Channel, I did contact them about using my travel blog, about the 4 Corners region, as a show idea.  Nah, they only use ideas from their own staff...their loss!!!

...and now the mammoths. 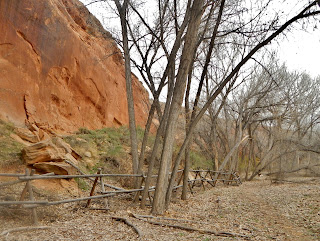 You will know you're in the correct area due to the wooden post fencing around this area.  First off, they don't want anyone climbing up to the rock art due to the unstable nature of the rocks and sand.  Second, they definitely don't want anyone up close and personal touching the carvings and drawings; they're already weather beaten down enough.  The acidity of the human hands will only cause further destruction, never mind the "idiot markings". 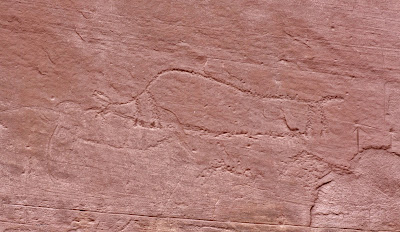 Supposedly there is a bison carving overlaid on the mammoth.  After I outlined the photo, the small head looks more like a deer or elk, not a bison.  Then again, I'm no expert.


...and there you have them, the Mammoths of Sand Island.

Whether you decid to camp at Sand Island, or just visit, enjoy the journey!

Posted by Mary Cokenour at 8:47 AM