If you refer to the map I posted with yesterday's write up about the first nine miles on CR 146, you'll see some of the items I've mentioned in today's title. As Roy and I continue to visit Montezuma Canyon, the map will become crowded with more and more information as we find new secrets. One of our goals is to travel down Bradford Canyon Road to where Bradford Creek and Montezuma Creek meet; an entire wall of ledges is filled with Native American ruins. I found one photo on the internet and it is jaw dropping; going there, seeing it in person and taking our own photos is great motivation. 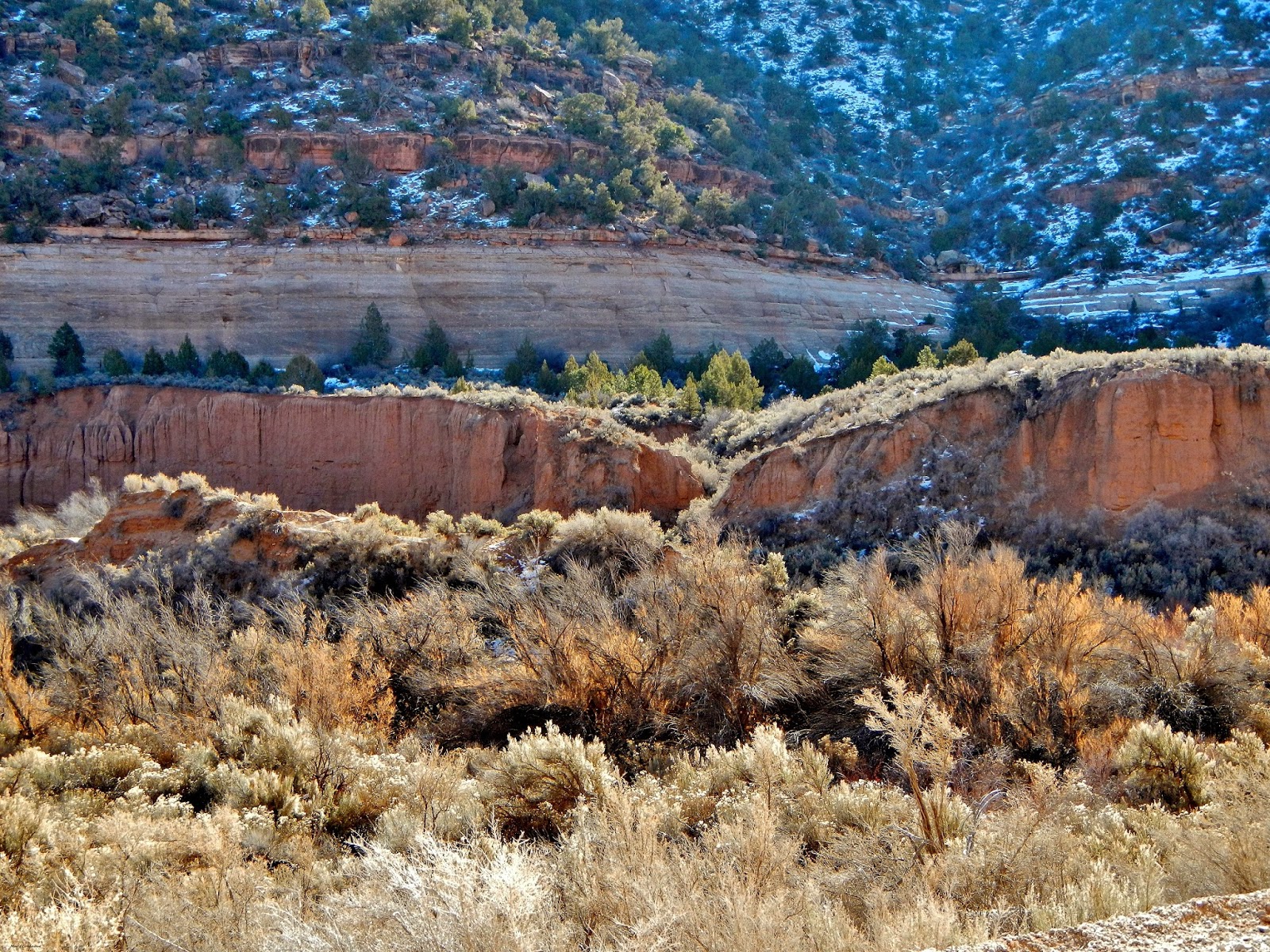 After passing the homes built inside sandstone hills, more buildings become evident in the distance; probably another ranch we thought, but we were in for a shock.

﻿
On the way we passed by two unusual wooden structures; a wooden door to a small home inside a sandstone hill cave; the decor gives it the name "Cowboy Cave".  Whether anyone actually lives (ed) there, whether they are (were) actual cowboys, or is it just another cave being used for storage is a mystery for now.  Then there was a ladder like structure going up the side of a hill leading to; well we looked and looked, but could find nothing to explain its existence.

Talk about surprise when we hit the ten mile mark on CR 146 and came upon the Montezuma Canyon Ranch & Vineyards; we knew about vineyards in Spanish Valley and Castle Valley via pamphlets given to tourists, but right in Monticello's own backyard!?!  Being January when we went through the area, the vines were all brown and denuded of foliage; but the vineyards stretched on and on. 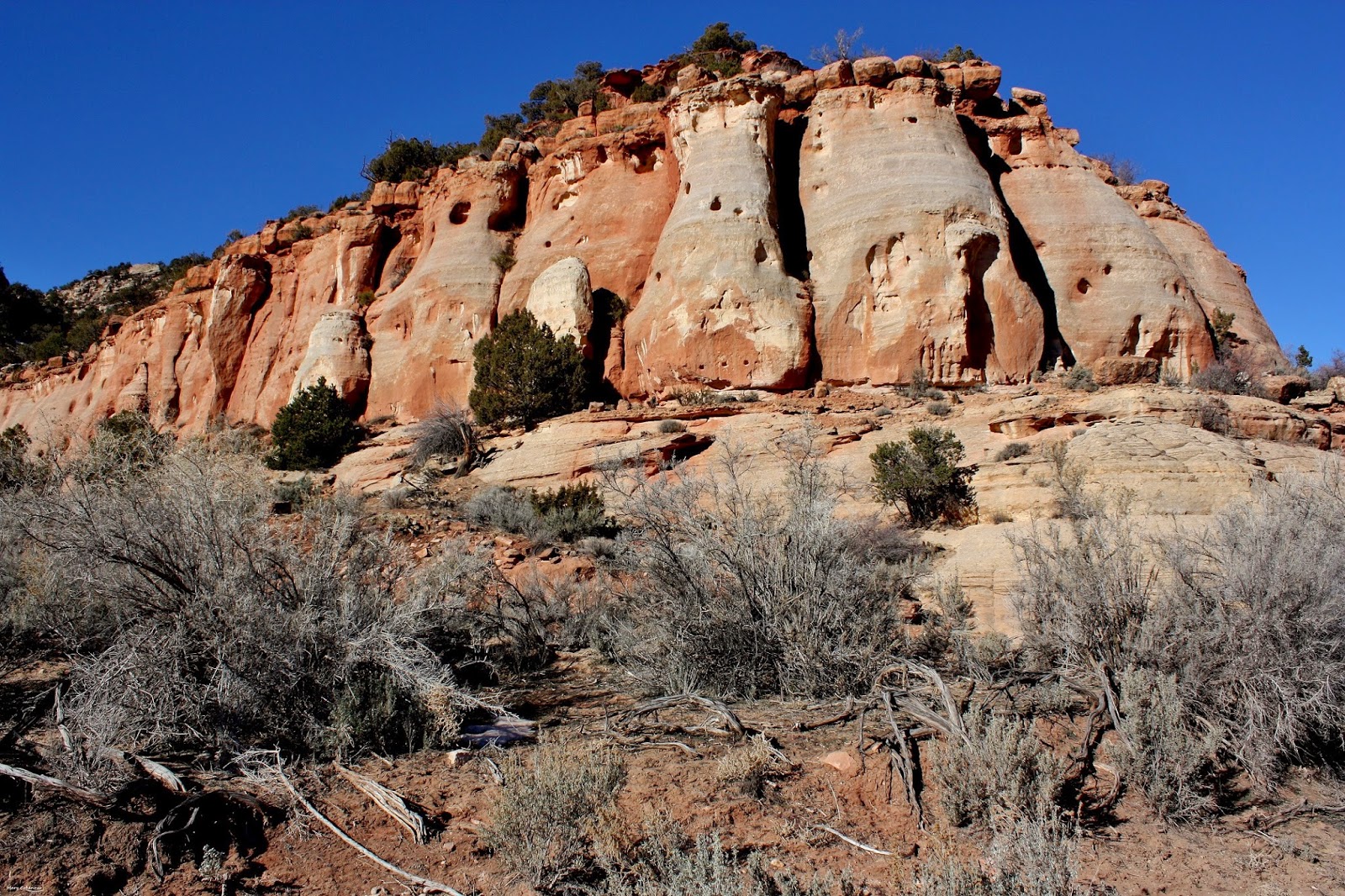 Driving past the vineyards, we just couldn't help but revel how beautiful the area is; at the same time, we kept wondering how we could get across to check out more caves up close and personal.  The landscape may look flat, but it is full of deep crevices and it takes some planning and preparation to navigate through them.  We had neither planned, nor were we prepared, for such an adventure...yet. 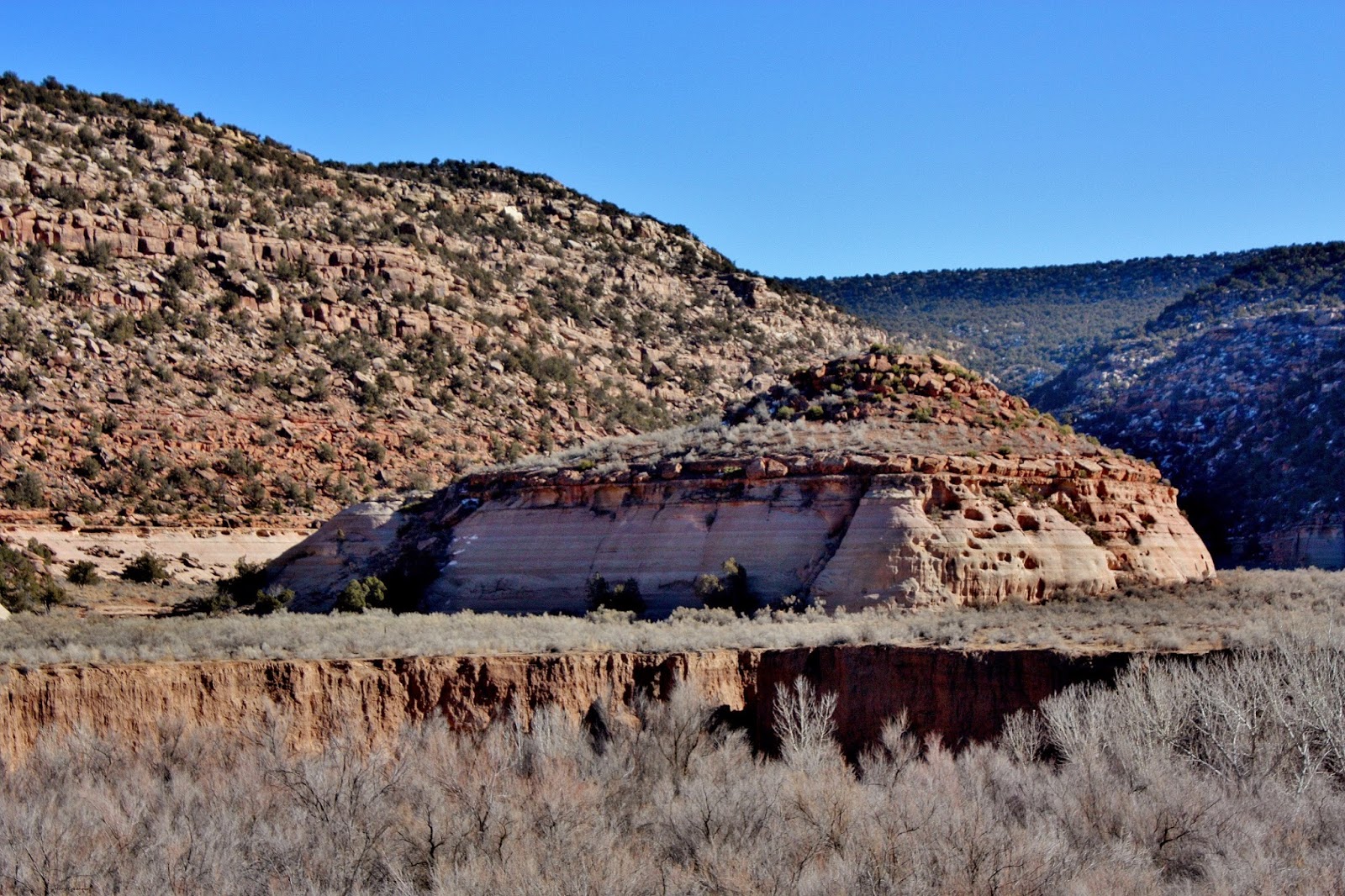 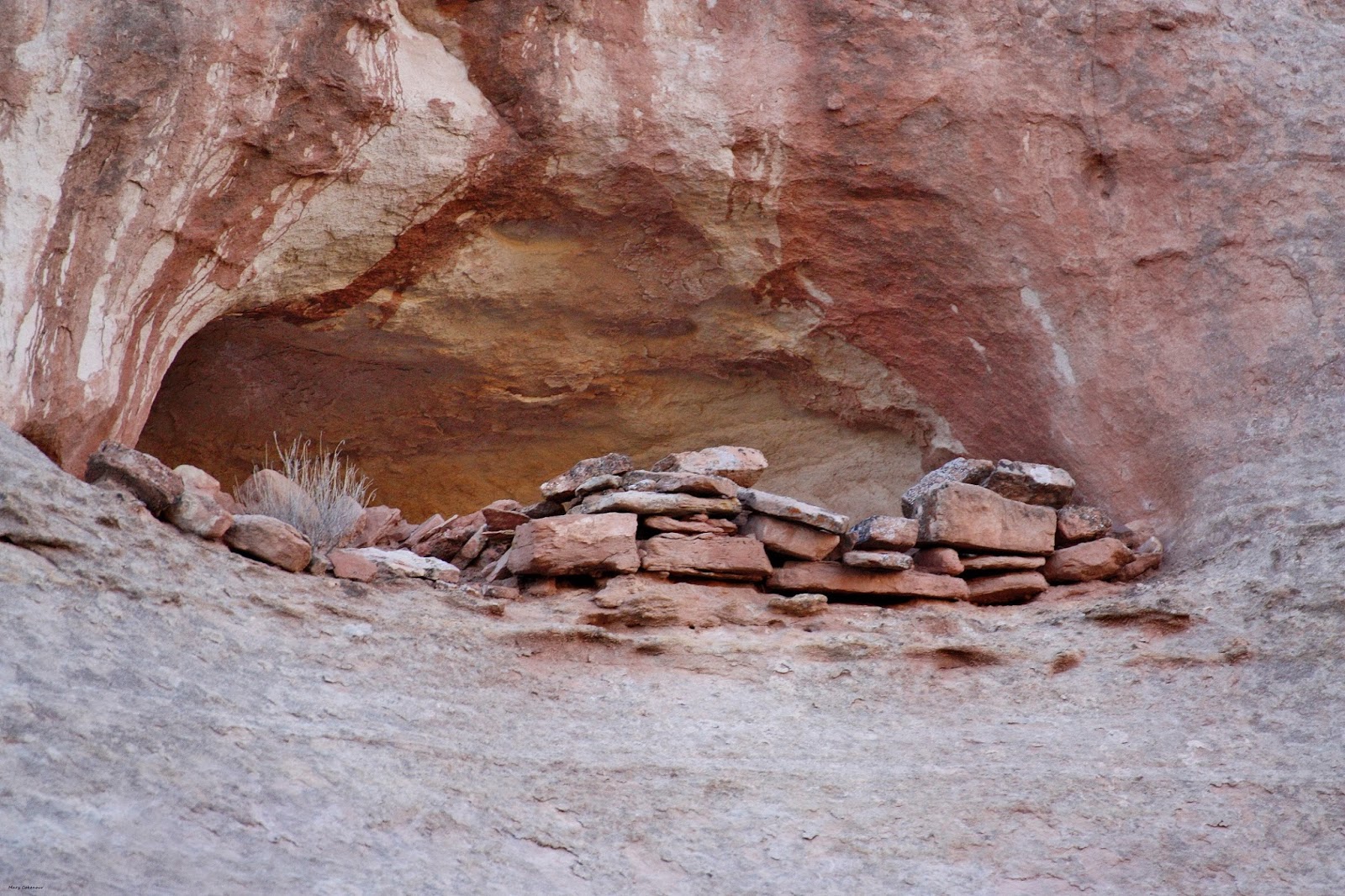 At mile 14, a small cliff dwelling is on the upper right; mile 14.5 is a primitive switchback road that winds its way down the face of the hill...wait till you read about that heart pounding ride in a later post.  A hint, I told Roy that if we lived, I was going to so hurt him; yeah, it was that bad.

The next ten and a half miles was so full of formations, petroglyphs, trails and a multitude of wondrous things; those are the things we saw, who knows what we missed!  Oh, I need to explain something about the road, there will come a point where you will reach a section of ranches.  Don't panic when you see "No Trespassing" signs facing your way; no, the road doesn't suddenly stop.  The signs refer to the land on either side of Montezuma Canyon Road; CR 146 is a San Juan County Road opened to the public and you can continue on; just don't park and walk around on the privately owned land.  There are also sections which become narrower, your vehicle will hug the hillside while you wonder if anyone is coming around the corner, so drive slow and carefully.  Actually this is a good thing, the slowing down part that is, as it gives you a good chance to have your passenger(s) keep a watchful eye out for arches, formations, ruins and rock art.  There were so awestruck, we kept forgetting to reset the odometer to record the locations; again, who knows how much we missed too. 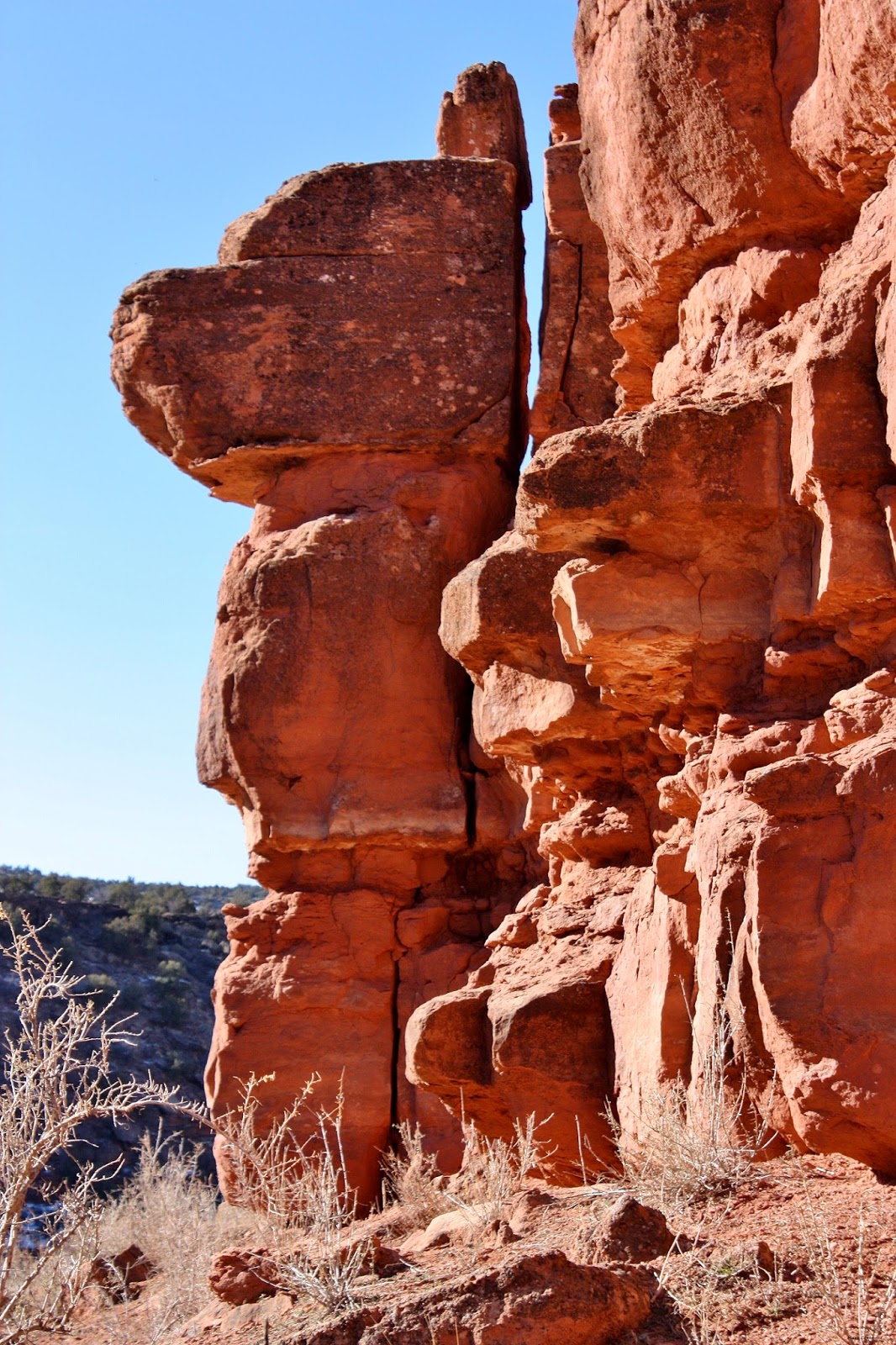 This formation we called the "Indian Brave" as it does resemble such a figure from the Old West.  He seems to be looking eastward at the caves up on the hillside; is he guarding them or longing to get home? 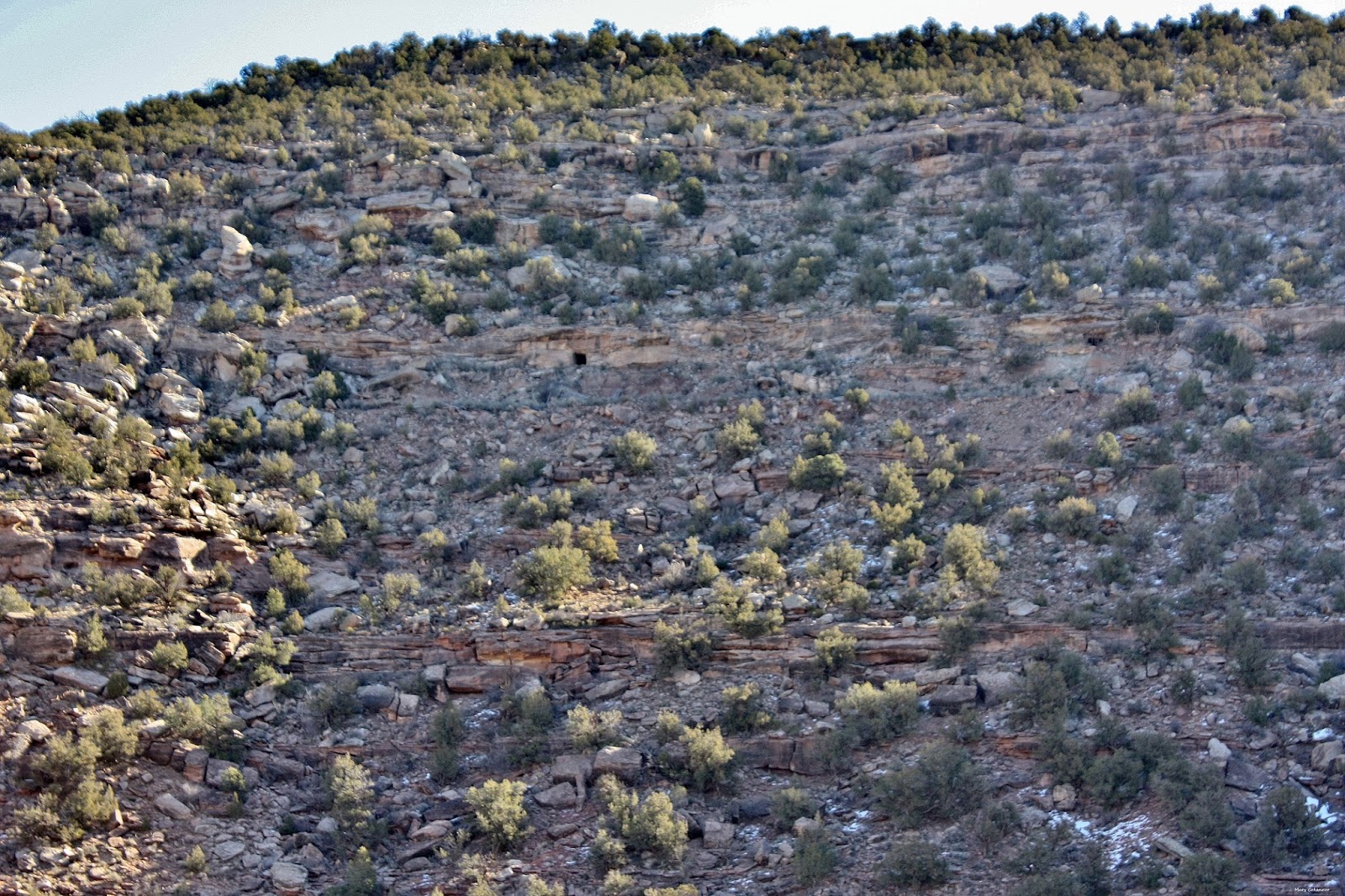 I had just looked up from making sense of my maps when I screamed at Roy to "stop, pull over!"; I jumped out of the SUV to run back to make sure I'd seen what I thought I had seen.  Yes, a petroglyph and definitely one we'd never seen the like of before.  A humanoid figure with the rays of the sun above it, there is a hand print and, perhaps, animal figures.  The figure faces east, so we also took a photo of the area it was looking at.  We gave the petroglyph the name of "Sun God and the Hand".

Not done yet! How about some unusual rock formations... 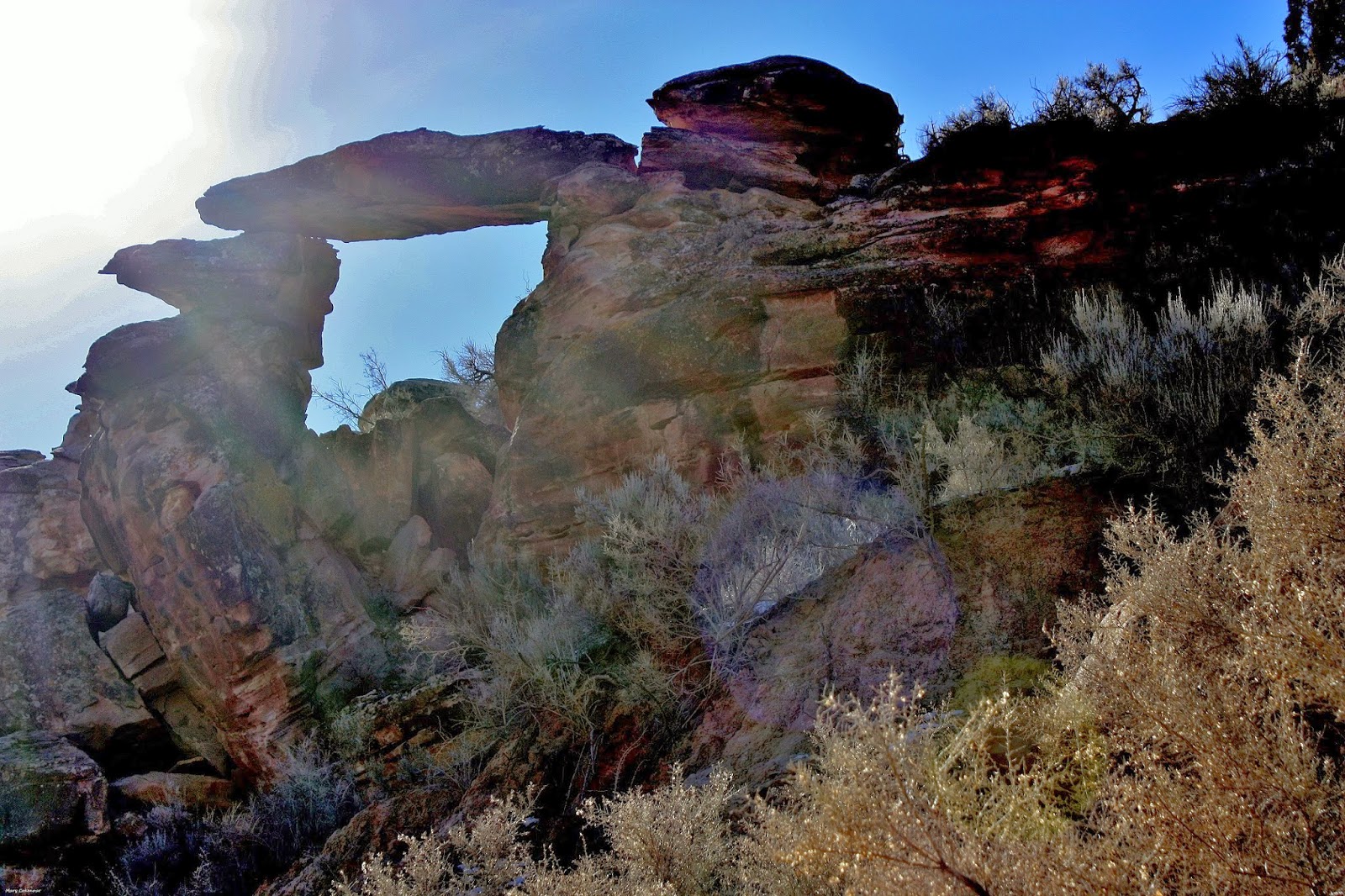 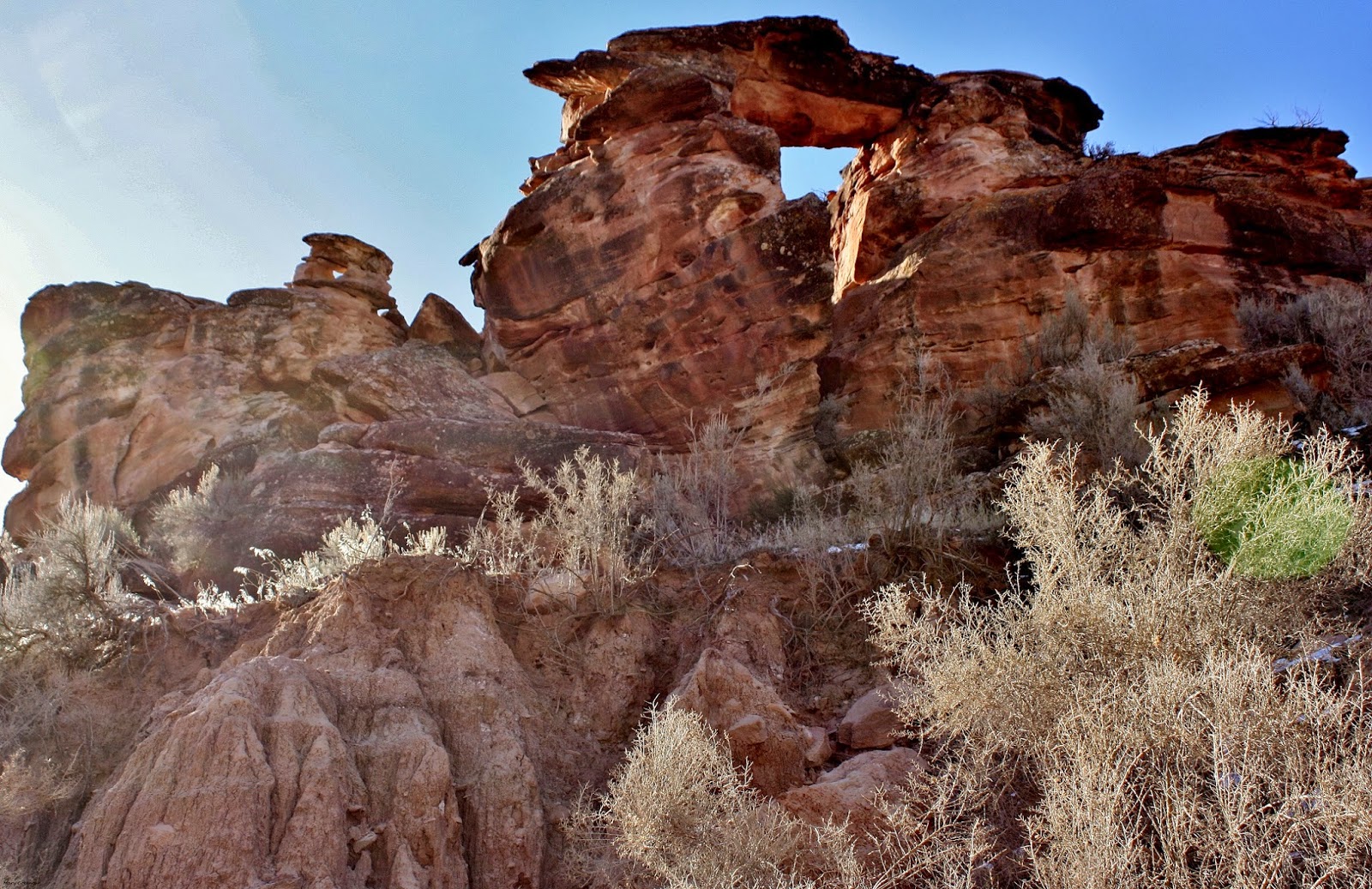 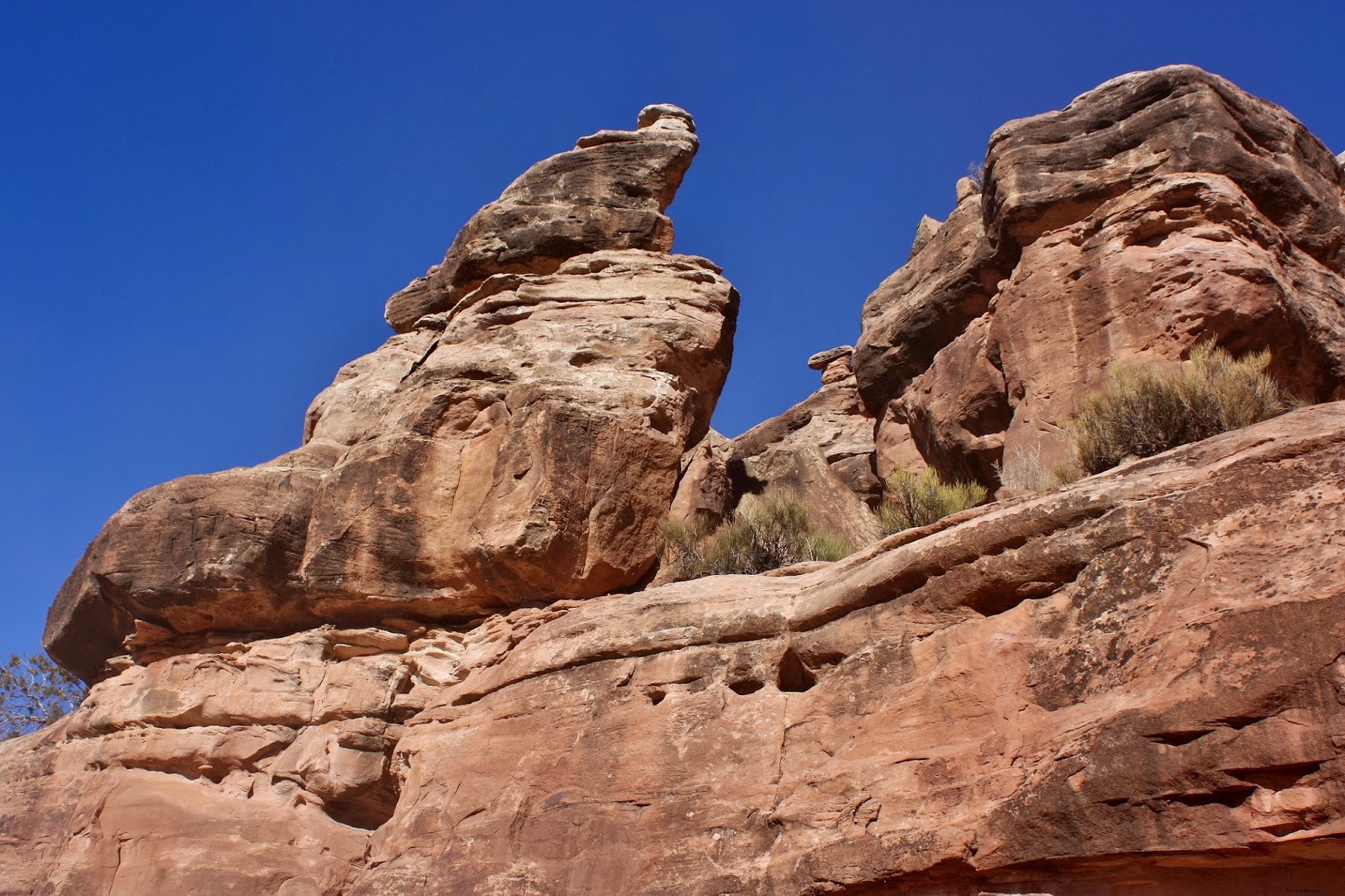 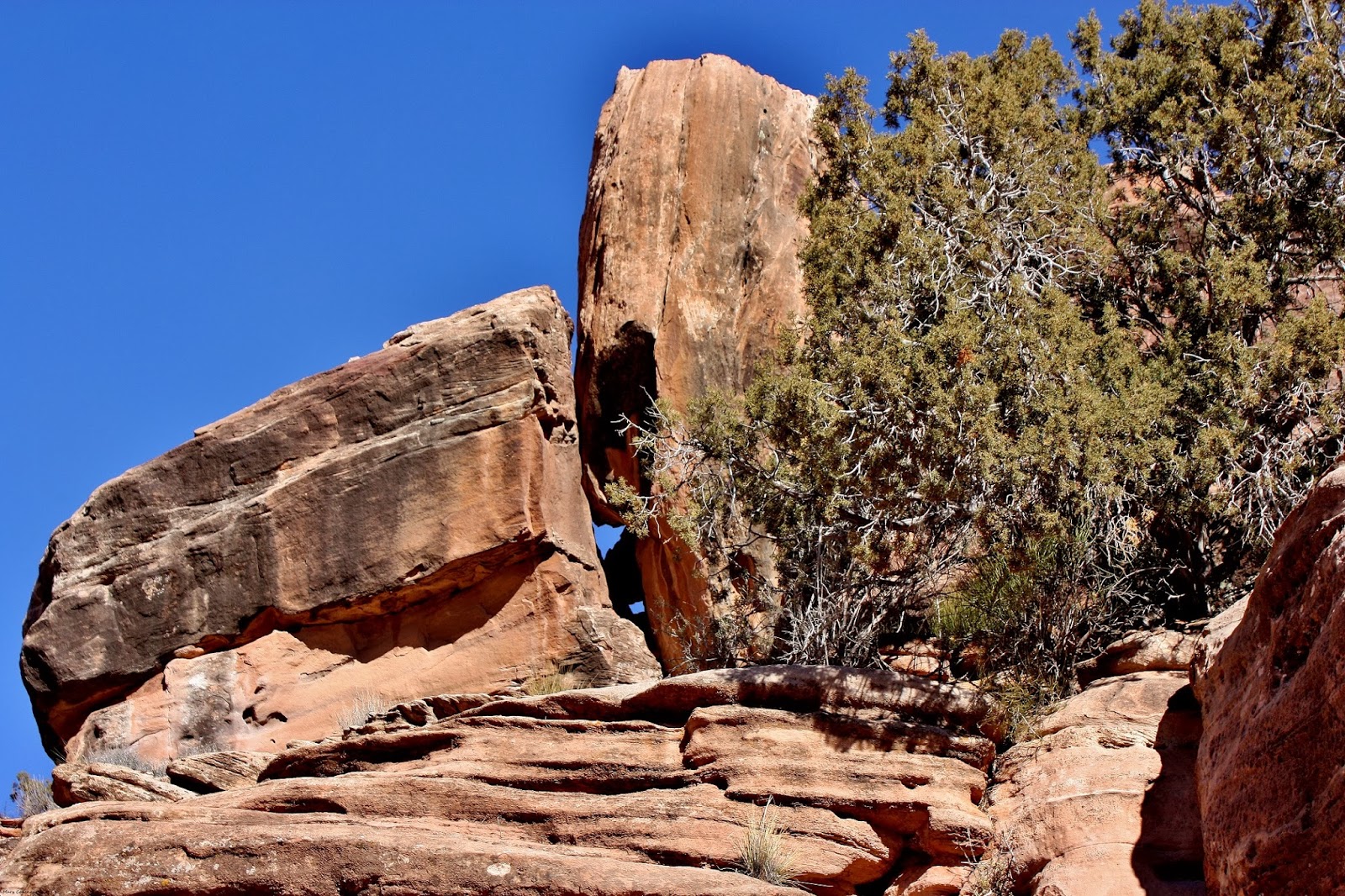 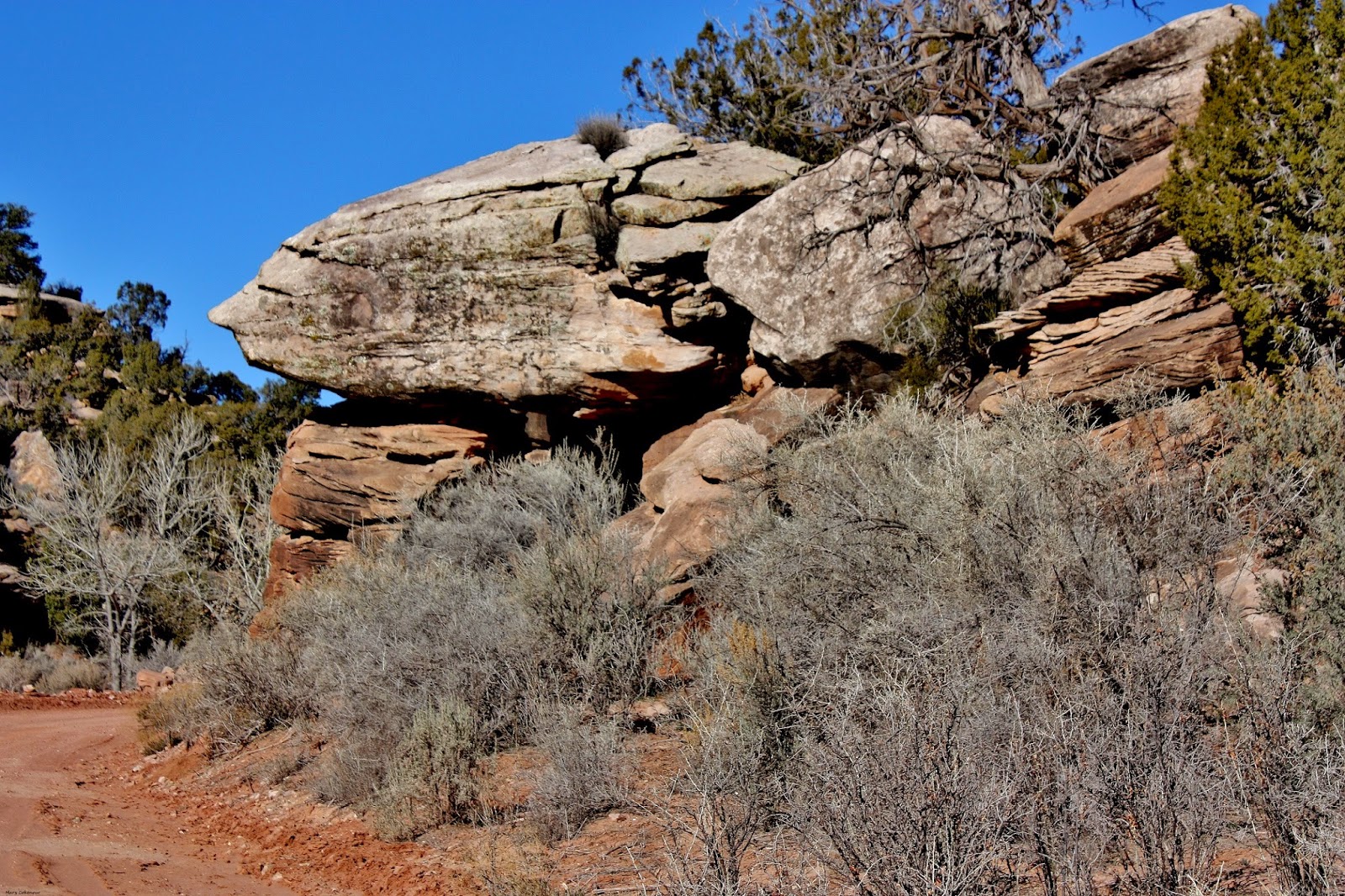 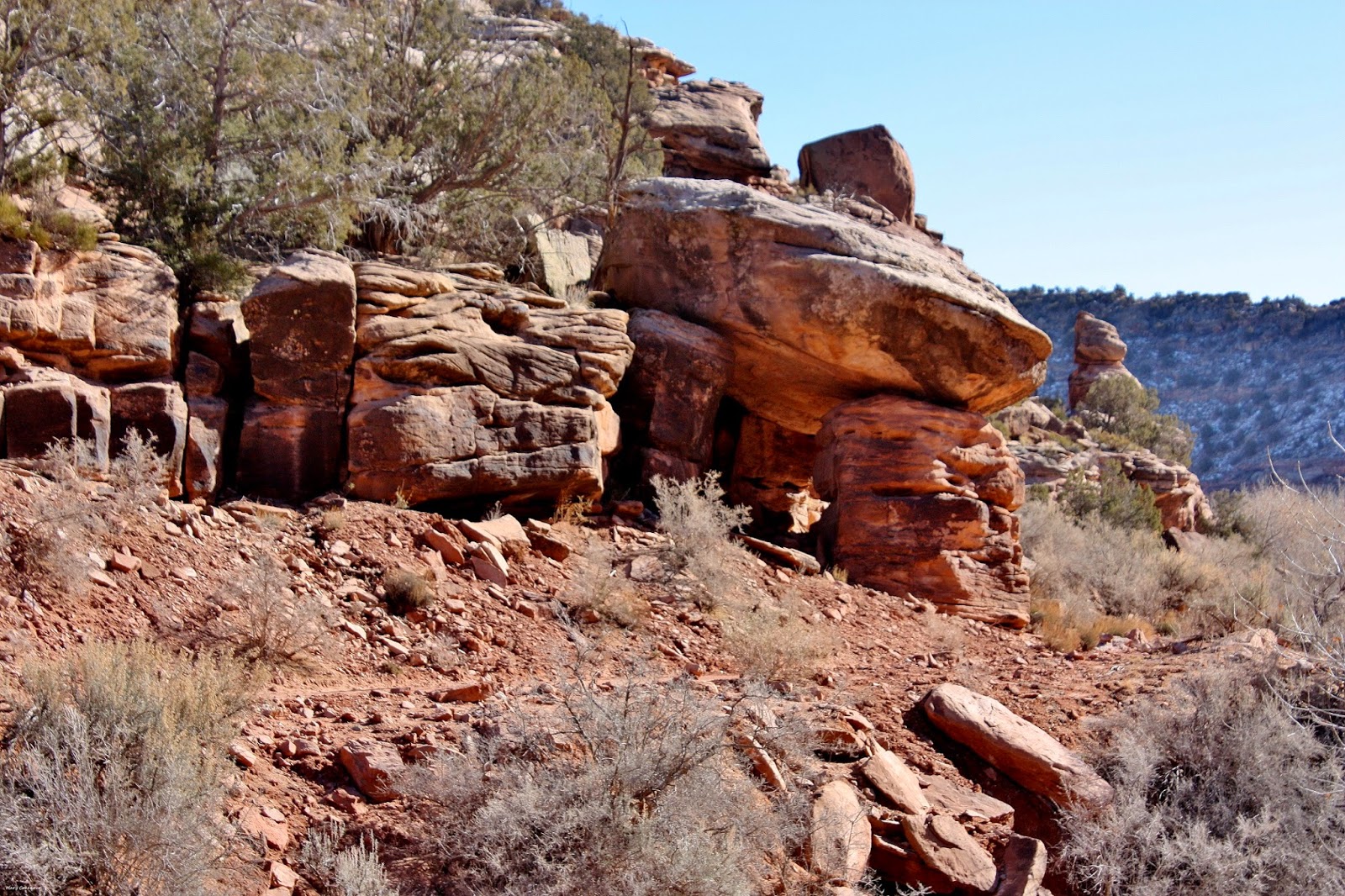 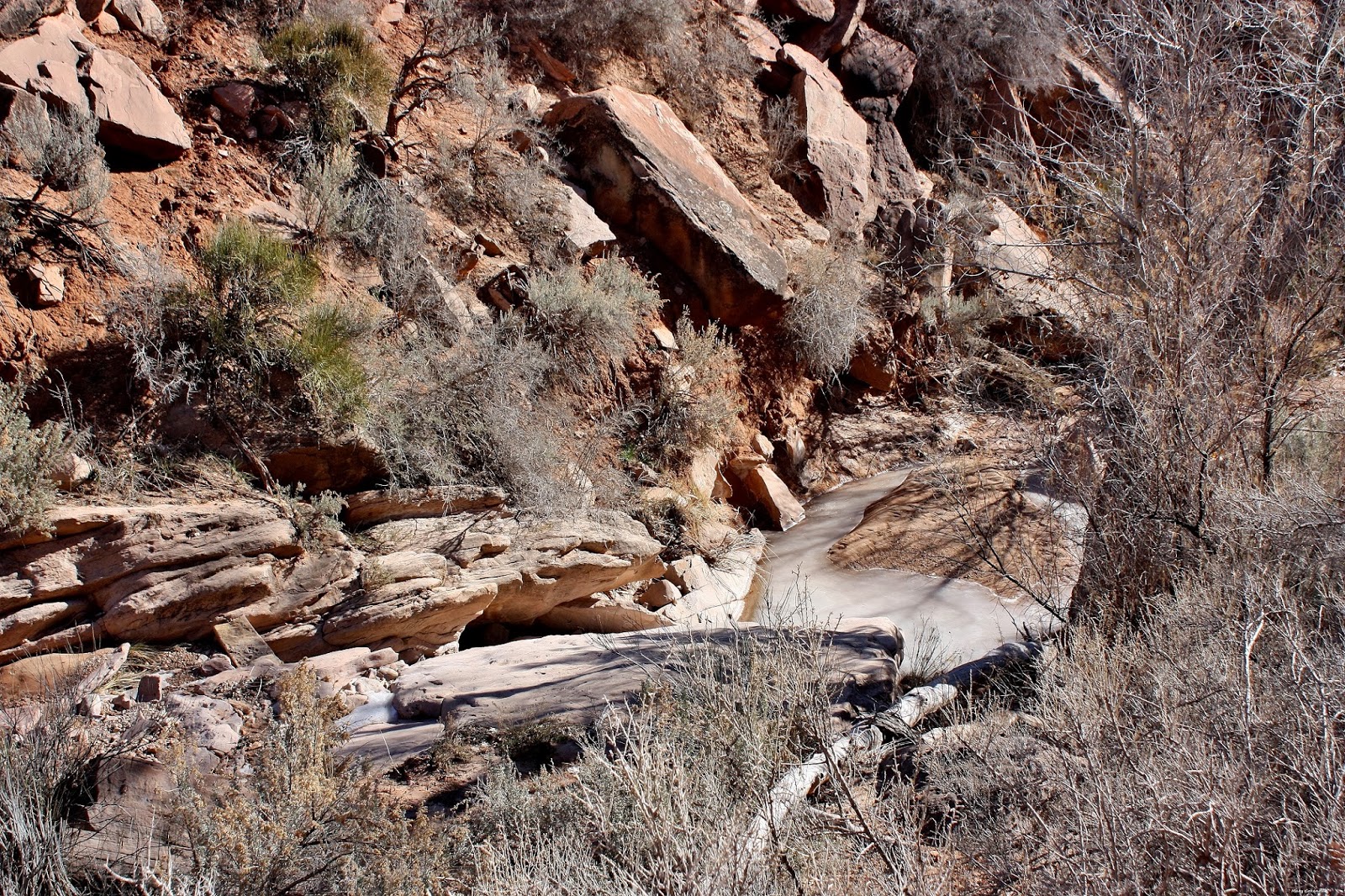 You know we have plans to go back and check out this trail; we need, yes need, to know what's on it and where it leads to.  That's how we roll ! 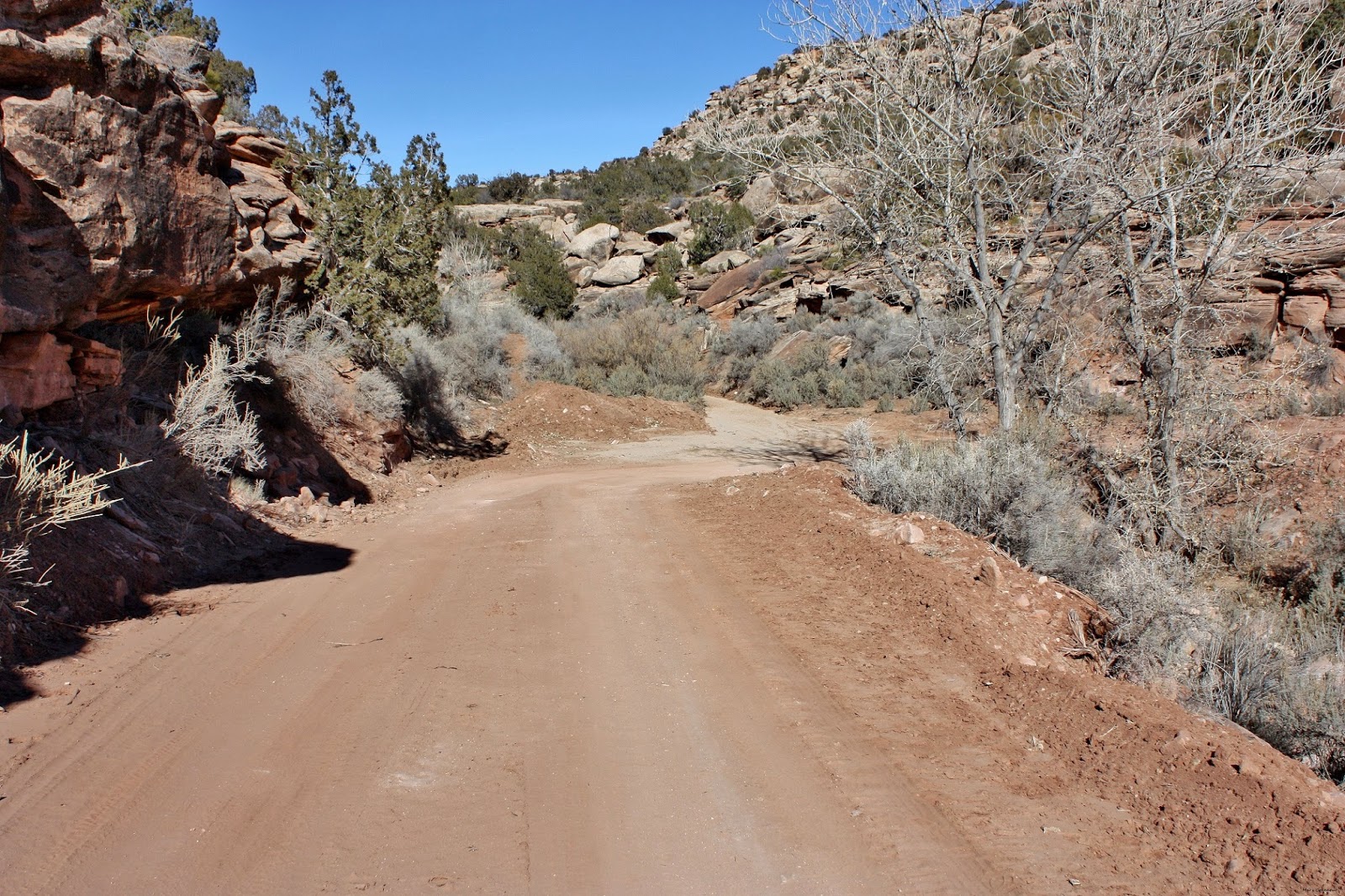 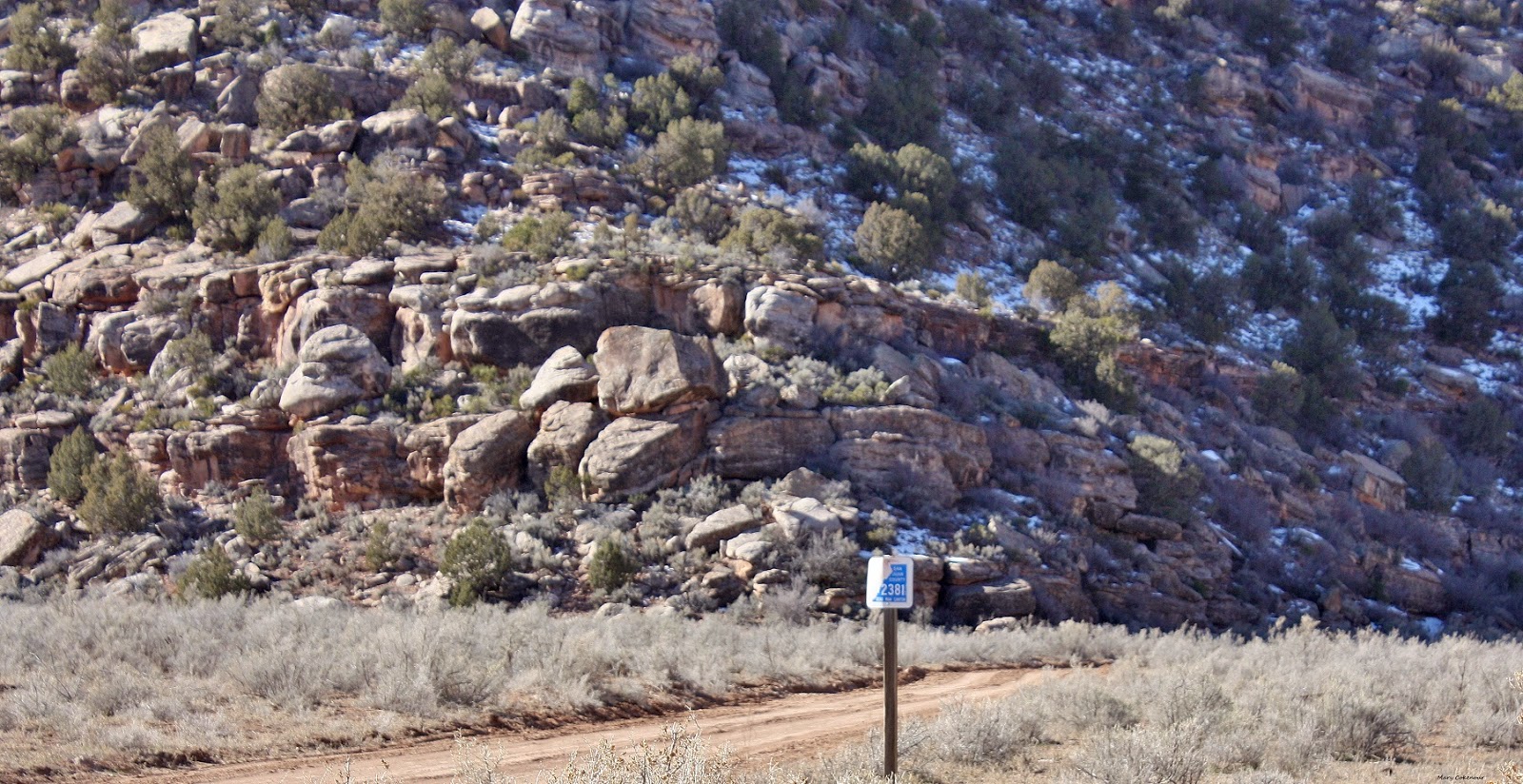 Mile 25 is a junction for Deadman Canyon Road - CR 2381; yep, you guessed it, already been there, done that and will write about it later on in another post.  So continue on CR 146; only two more miles and you'll reach Three Kiva Pueblo.  See, going through Blanding is not the exclusive way to the Pueblo; gas up, get snacks, water, a picnic meal in Monticello and make a grand day of Montezuma Canyon Road! 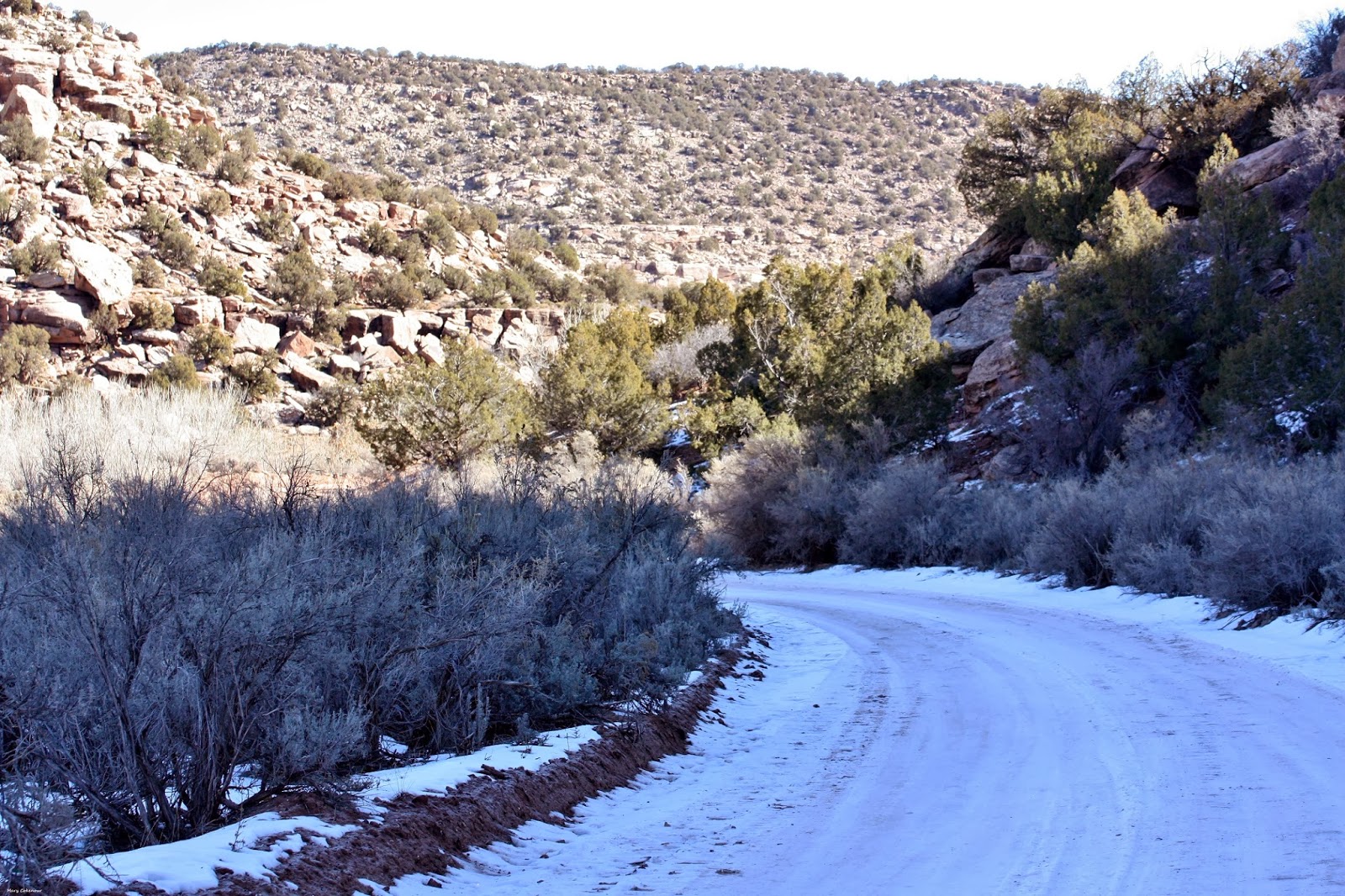 Oh, while the road is well maintained, the shadier sections still had snow on them; it was easy going though and pretty.  The temperature throughout our ride was in the high 40s, but with all the jumping into and out of the SUV, jackets were tossed into the back seat.  That clean, crisp air...ain't anything better! 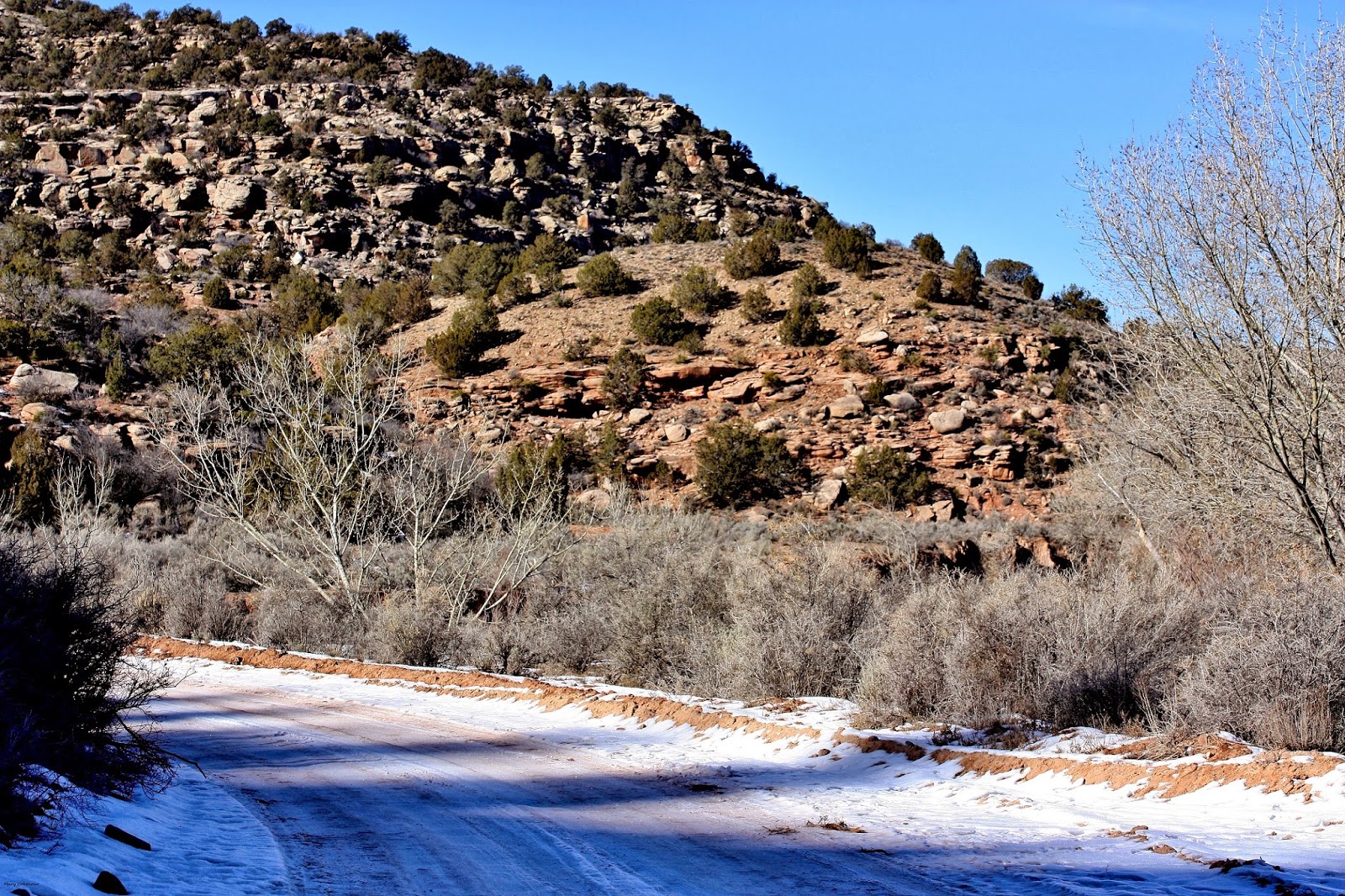 When you reach this dried out section of Montezuma Creek, well dried out at this time, Three Kiva Pueblo is basically just around the corner.  I say "this time" about the Creek as the second time we went through, there was water running through it; only a couple of inches though, so no playing U-boat commandos.  Now somewhere around here is also that Bradford Creek section that leads to those ruins...we will find them!


I'm done with Montezuma Canyon, or am I?  I'll be posting about our adventures throughout the canyons between Monticello and Blanding; and showing you the connections to Montezuma Canyon.  This is going to be a long running adventure; you will so be thanking me up, down and all around for posting maps!