All Roads Lead to Montezuma Canyon - More Ruins and Rock Art at the Southern End.

This adventure began with two goals in mind: #1 - find the Bradford Canyon Ruins and #2 - find where Bradford Canyon Road connects with Deadman Canyon Road and drive it through.  We achieved both goals which I will write about at a later time; for now, though, I need to tell you about what we found along the way....more ruins and rock art along CR 146.

We had already been told by several locals that Montezuma Canyon Road is chock full of sites to explore, and who knows how many have yet to be found.  The poor map I've made has been updated once again, and I won't be surprised when I finally run out of room for my little arrows and notifications. 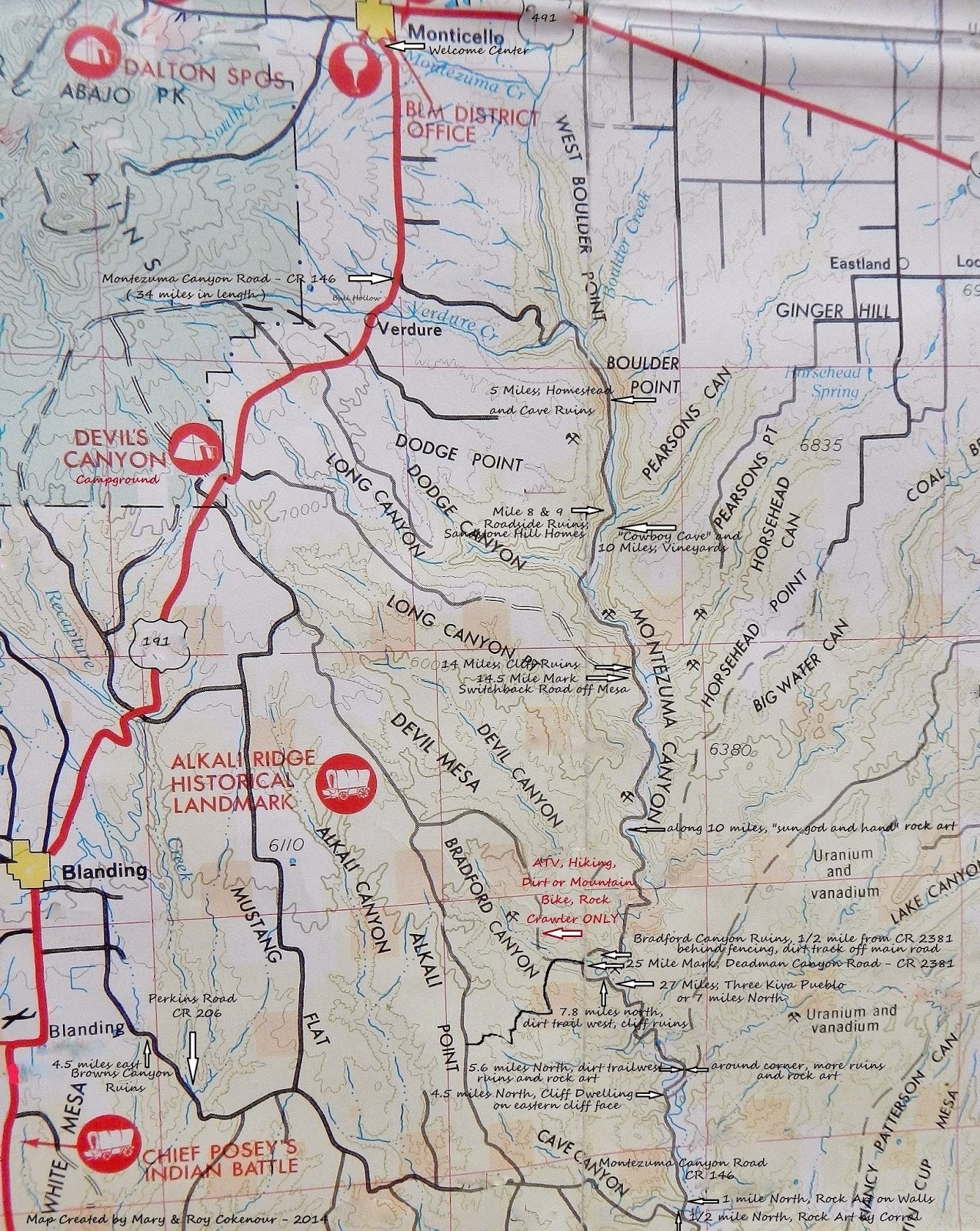 Since our goals were closer to the southern end of CR 146, we drove Route 191 south to Blanding, checked out a couple of roads along the way of course, stopped at the A & W to pickup a bagged lunch before going off east on Perkins Road (CR 206).  We also had one of our dogs with us, Jenna, who we had promised a day out of romping around, and we knew there were flat areas she would be safe in. 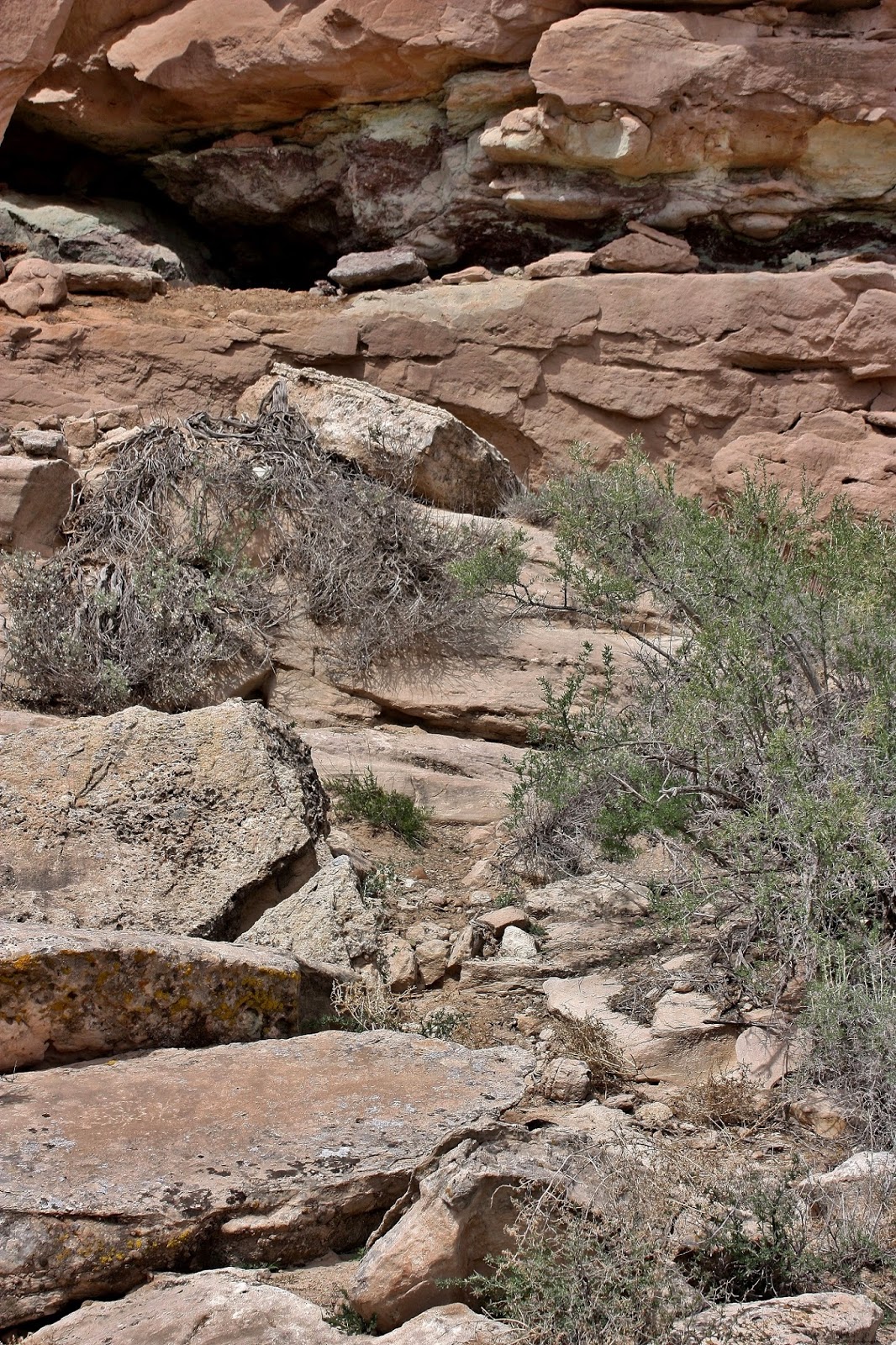 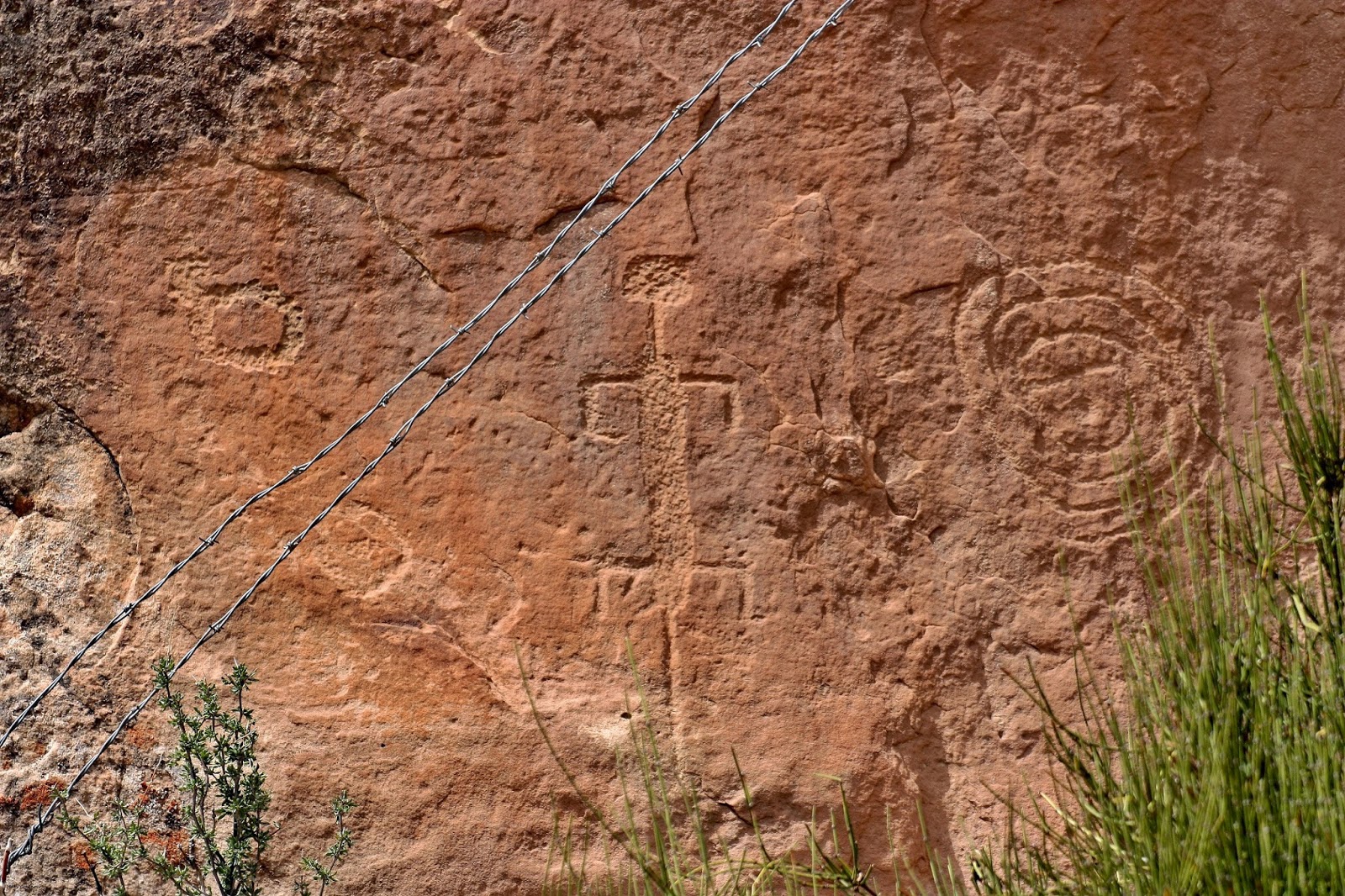 Our first stop was at the corral just a half mile north of the junction of 206 and 146; Jenna could run around to her heart's content.  While Roy kept an eye on her, I decided to play with the zoom lens along the walls.  There were the paintings and carvings we had found back in January, but hold up a sec; what's on the front of that huge boulder?  Holy moly, more artwork we had not seen before; while we were along the ledges, we had to climb behind the boulders, so missed some things on the face of them. As with many of the sites we have found, there is a natural path; well it looks natural, but I'm sure it was created by the ancestral people who walked it. 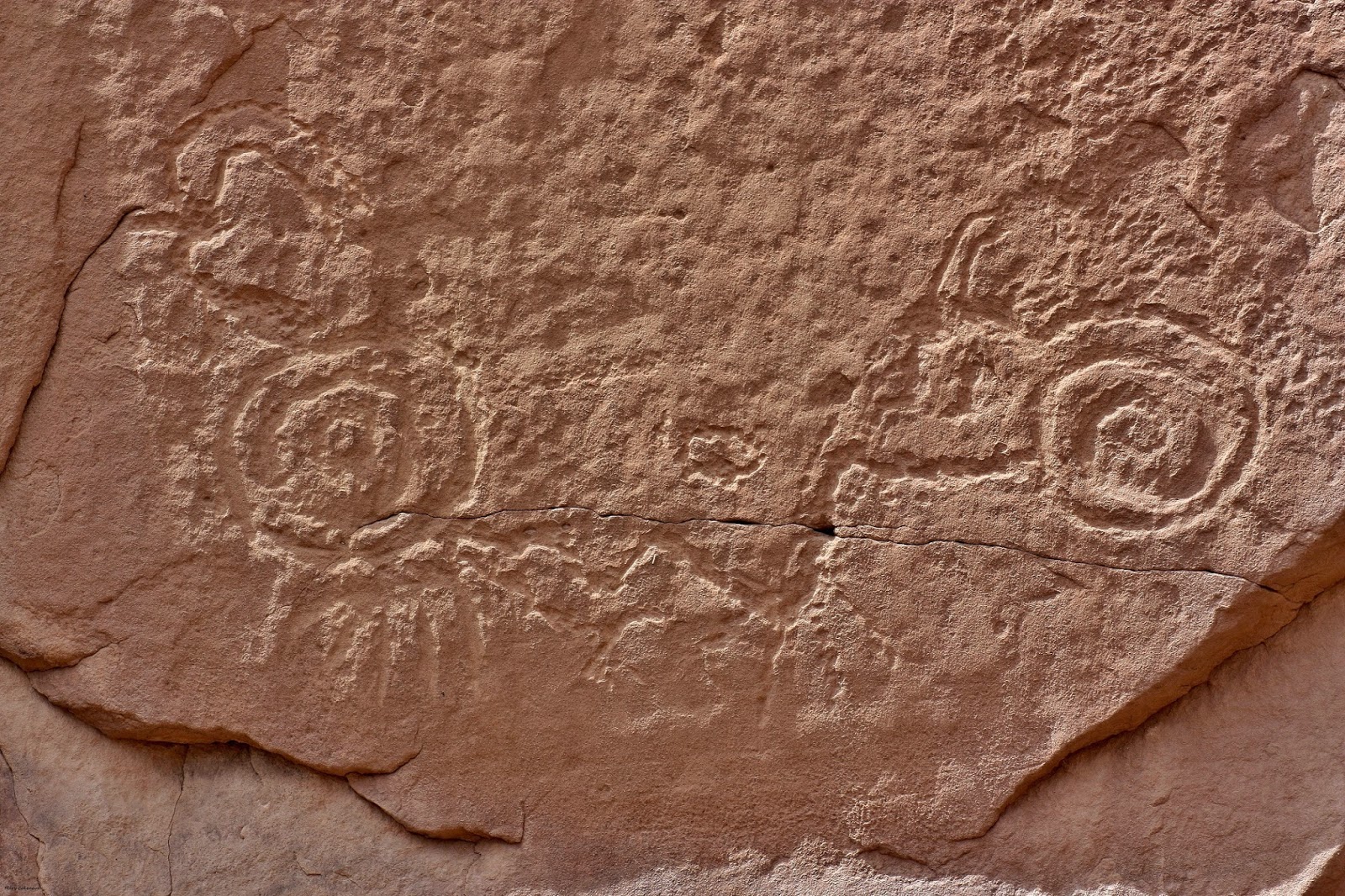 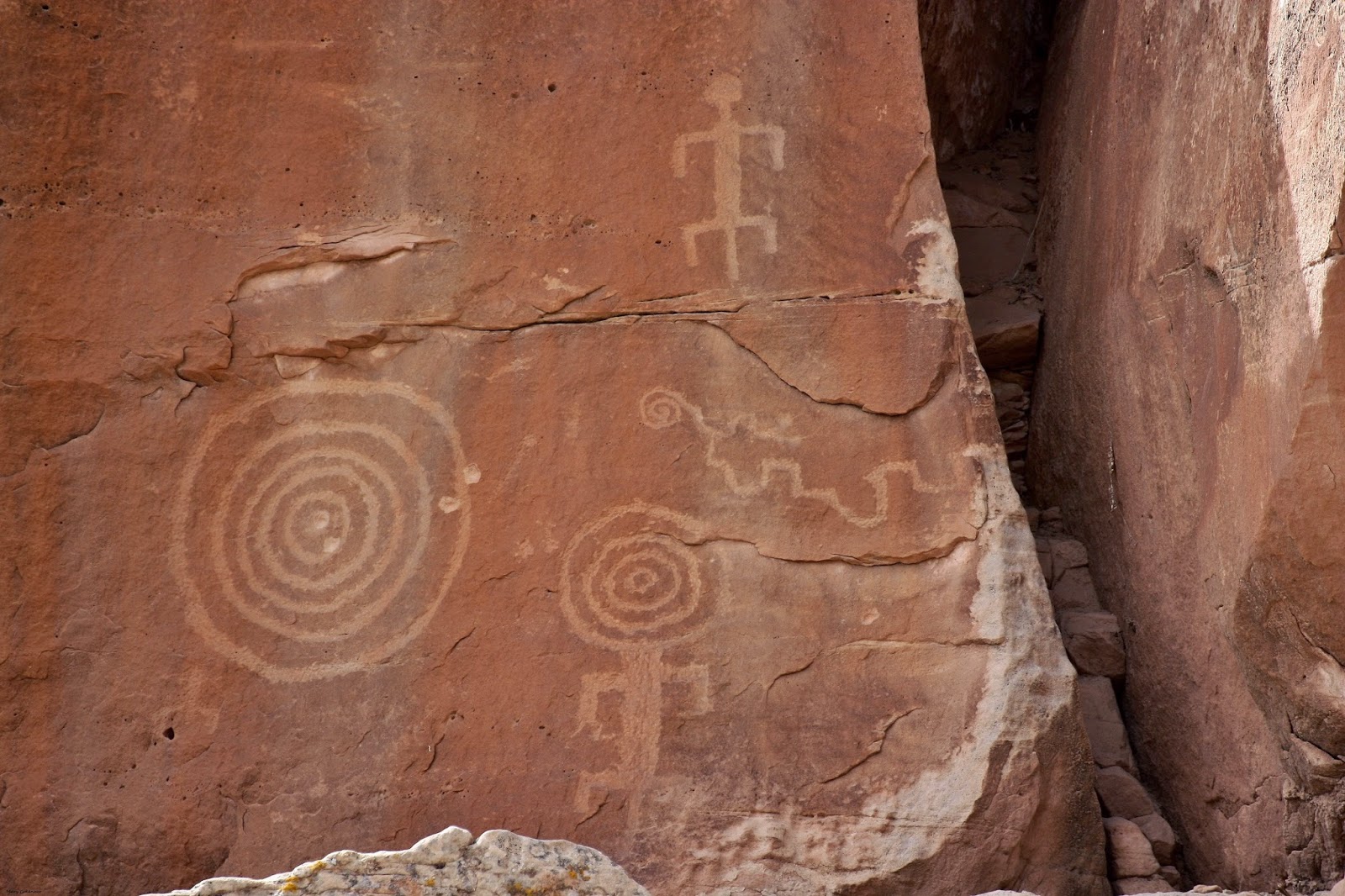 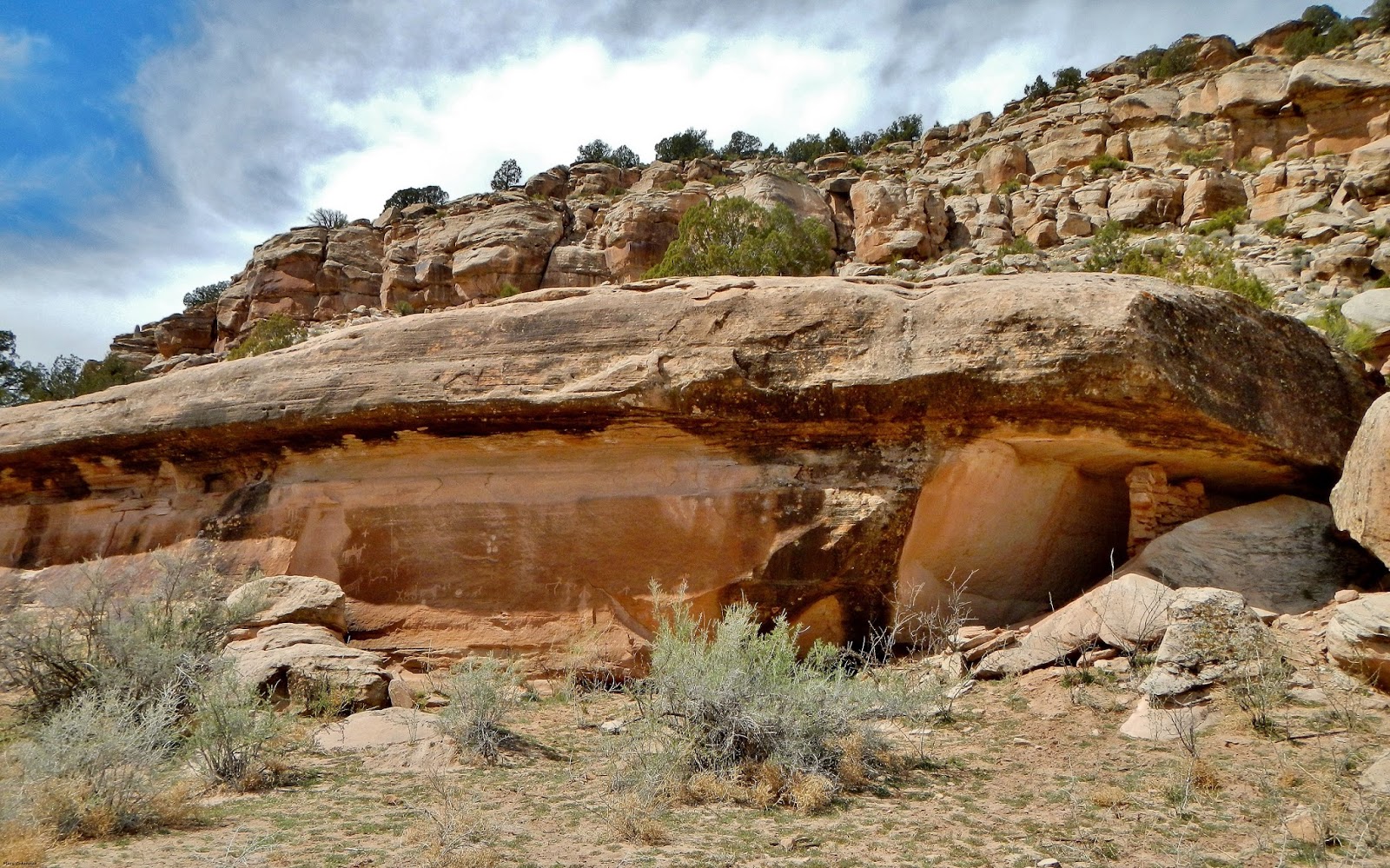 Back on the road again and it was around the 5.6 mile mark when something caught the corner of my eye.  We had passed by a dirt trail heading west and I made Roy back up to it; glad he doesn't mind when it's in the pursuit of adventure.  At road level was what appeared to have been a granary at one time; more rock art was on the wall as you walked to the left.  Now the rock art was very unusual as it depicted a horse drawn wagon, and instead of the typical stick figures, the people looked to have clothing on.  So it makes me wonder, was this the Native Americans telling the story of when the Hole-in-the-Rock pioneers first came to San Juan County?  Since this area is nearer to Blanding than Bluff, could it have been the pioneers sent up to Verdure (the first Monticello)?
﻿﻿ 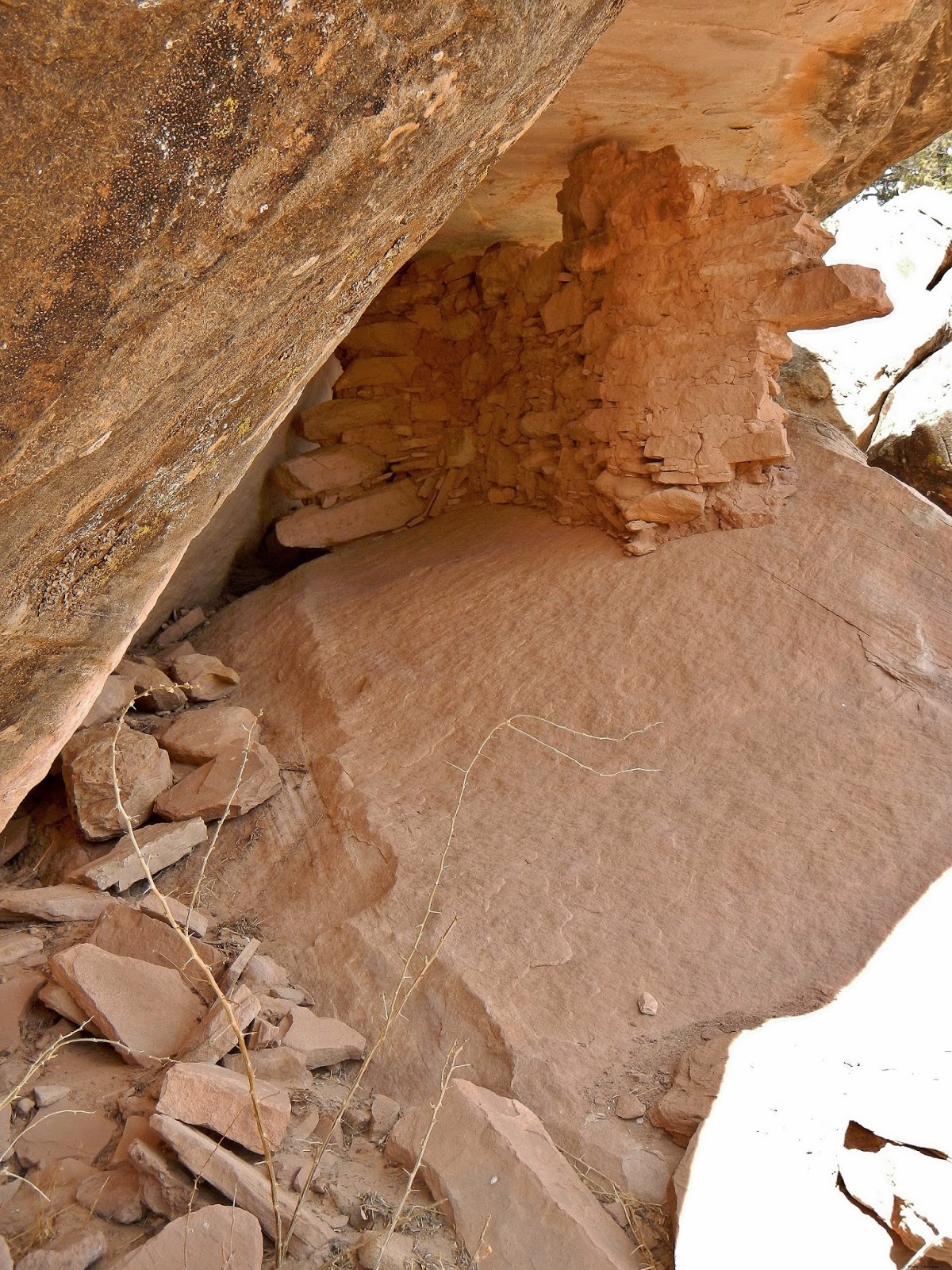 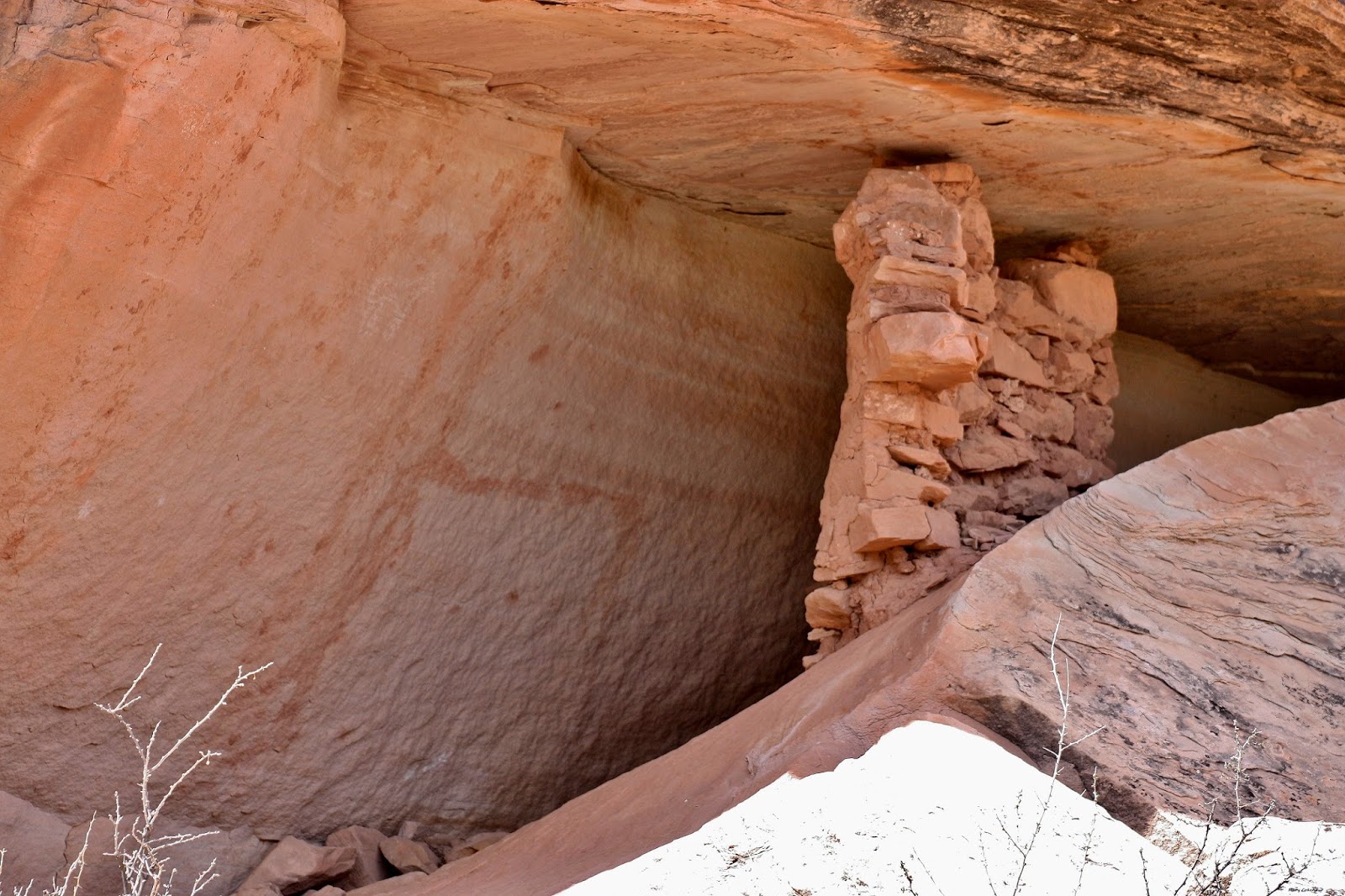 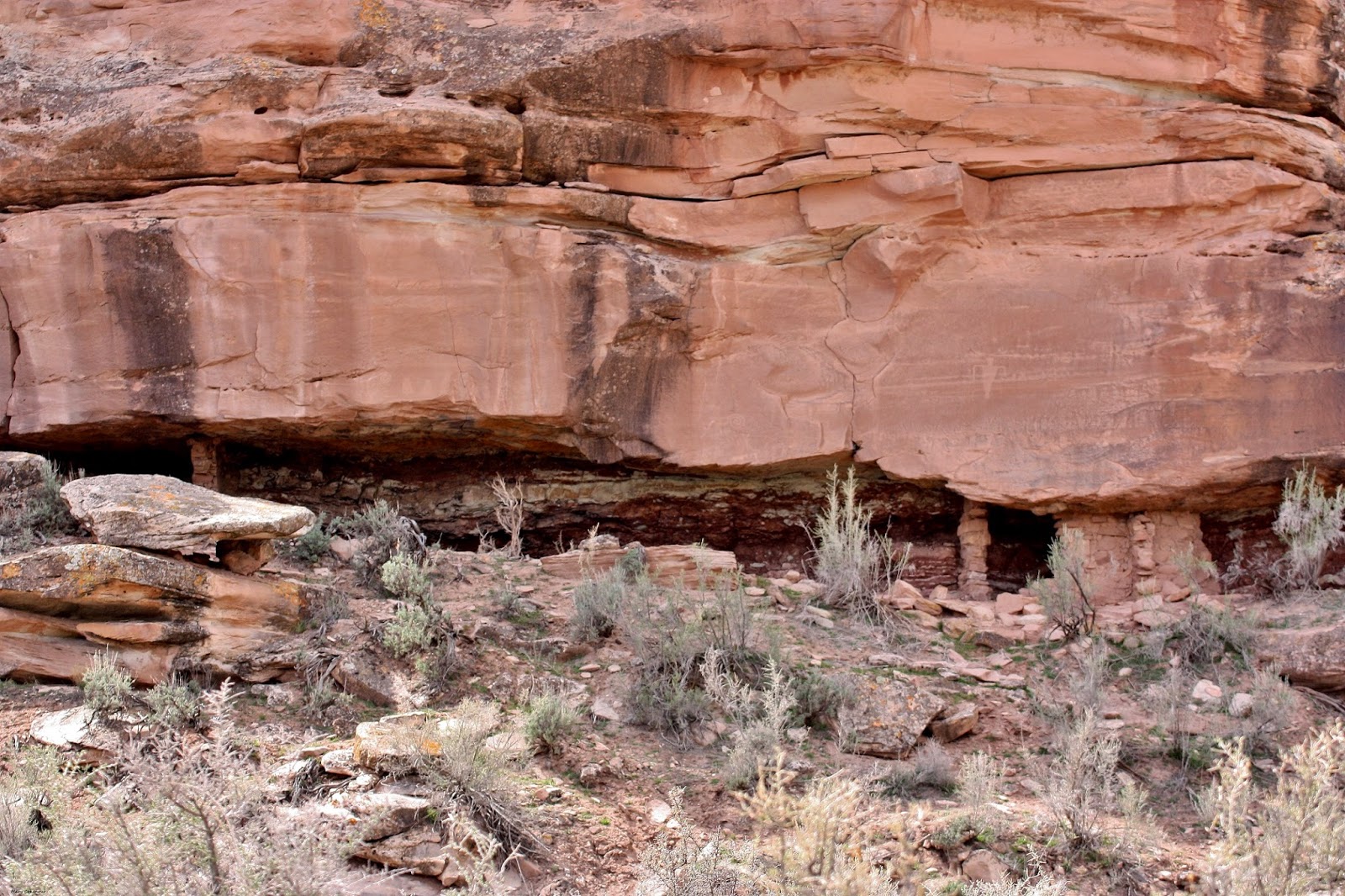 This dirt trail loops at the end of it and back onto CR 146 we were when suddenly I screamed, "Stop!" which scared the bejesus out of poor Roy.  We had only gotten 1/10th of a mile before I saw ruins up a small incline; rock art on the wall over them.  Again, a natural path gave me, not easy, but easier access to explore them; the ceiling was very low, so I was hunched over the entire time I was inside.  The larger figure in the rock art is the lizard which is seen at almost every site along Montezuma Canyon Road. 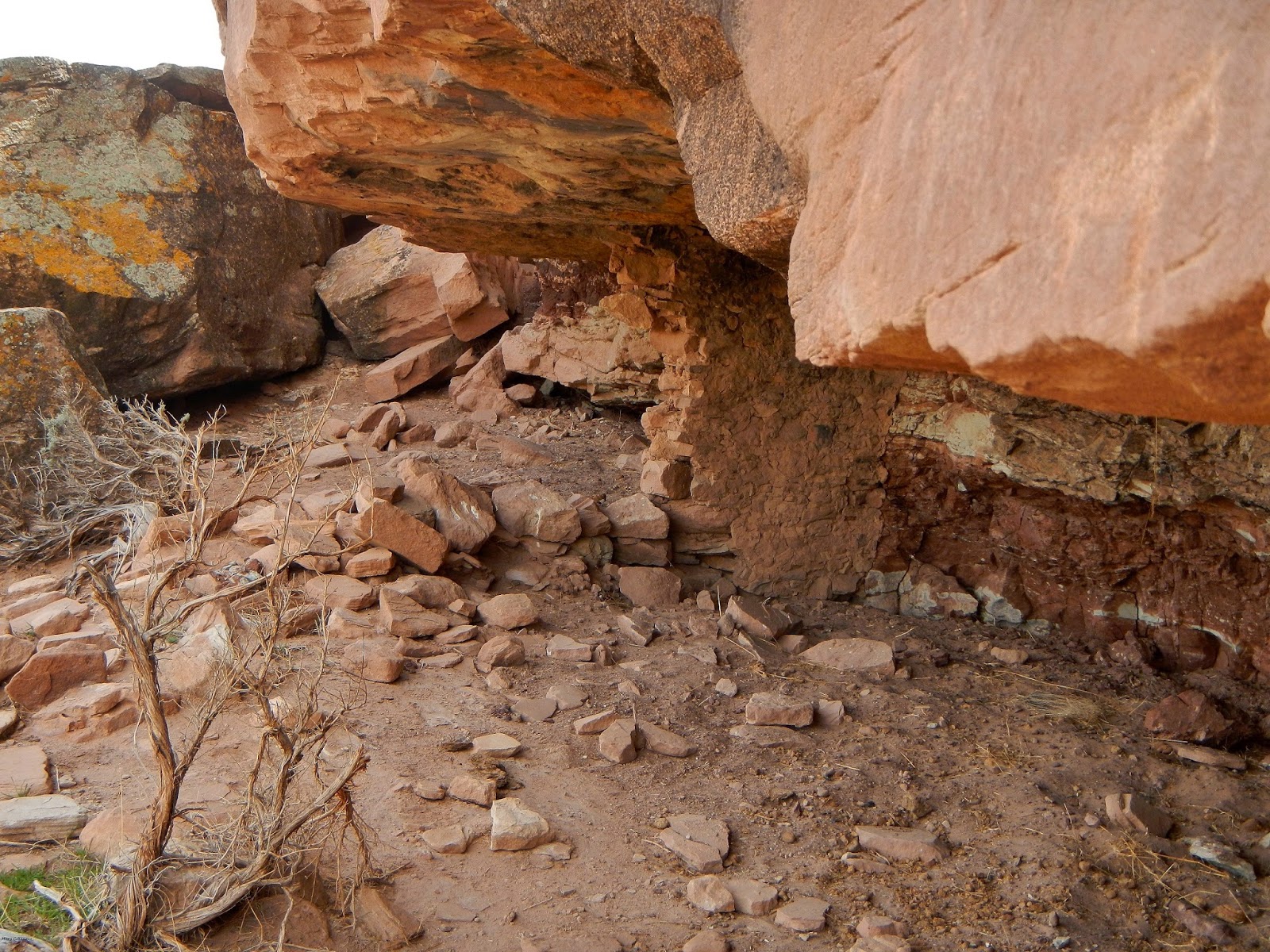 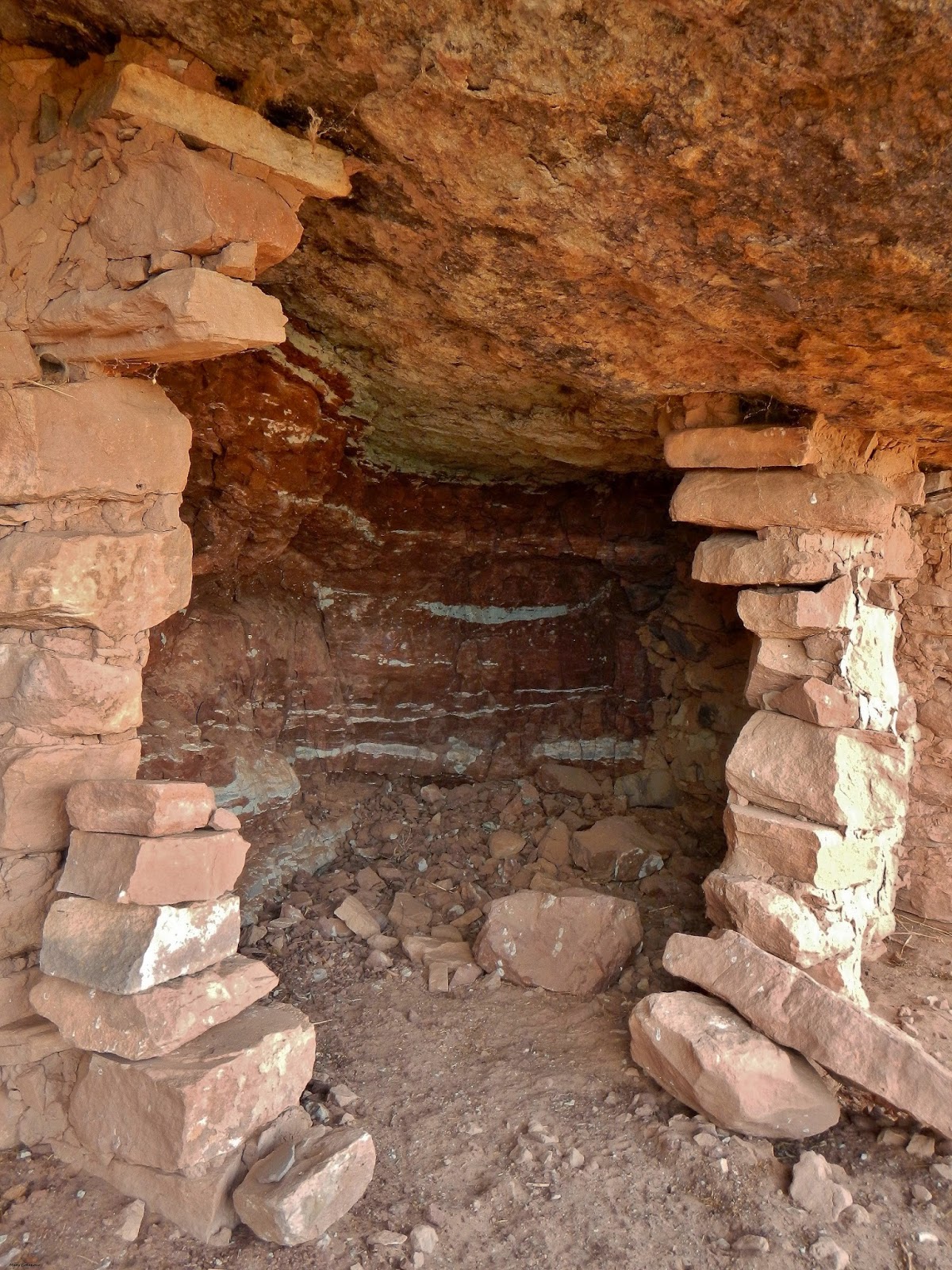 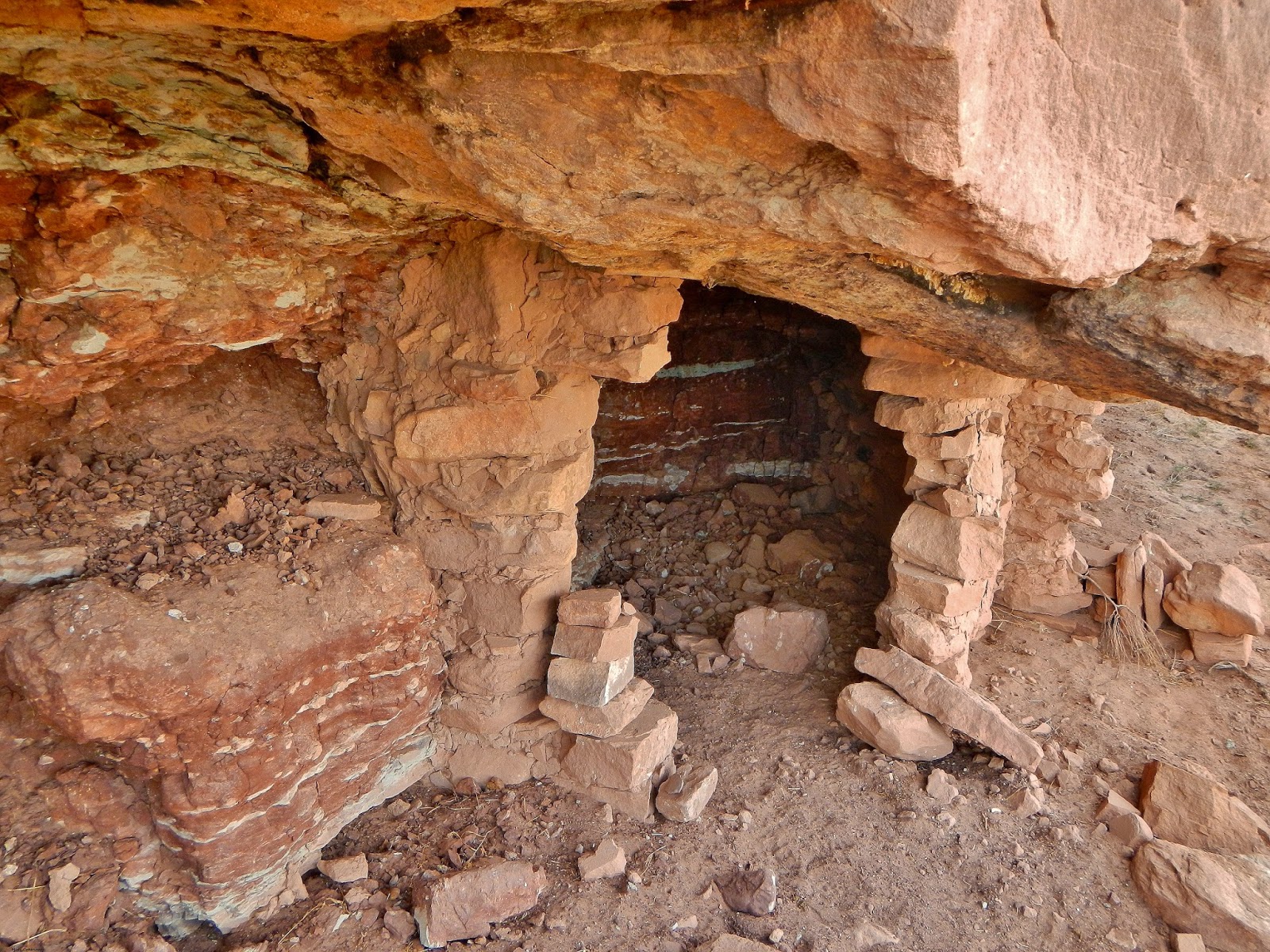 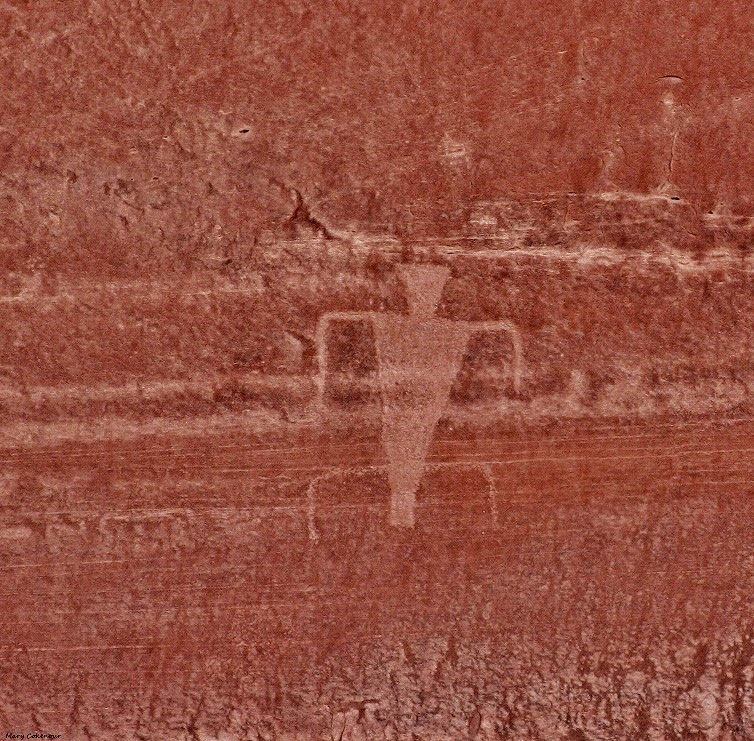 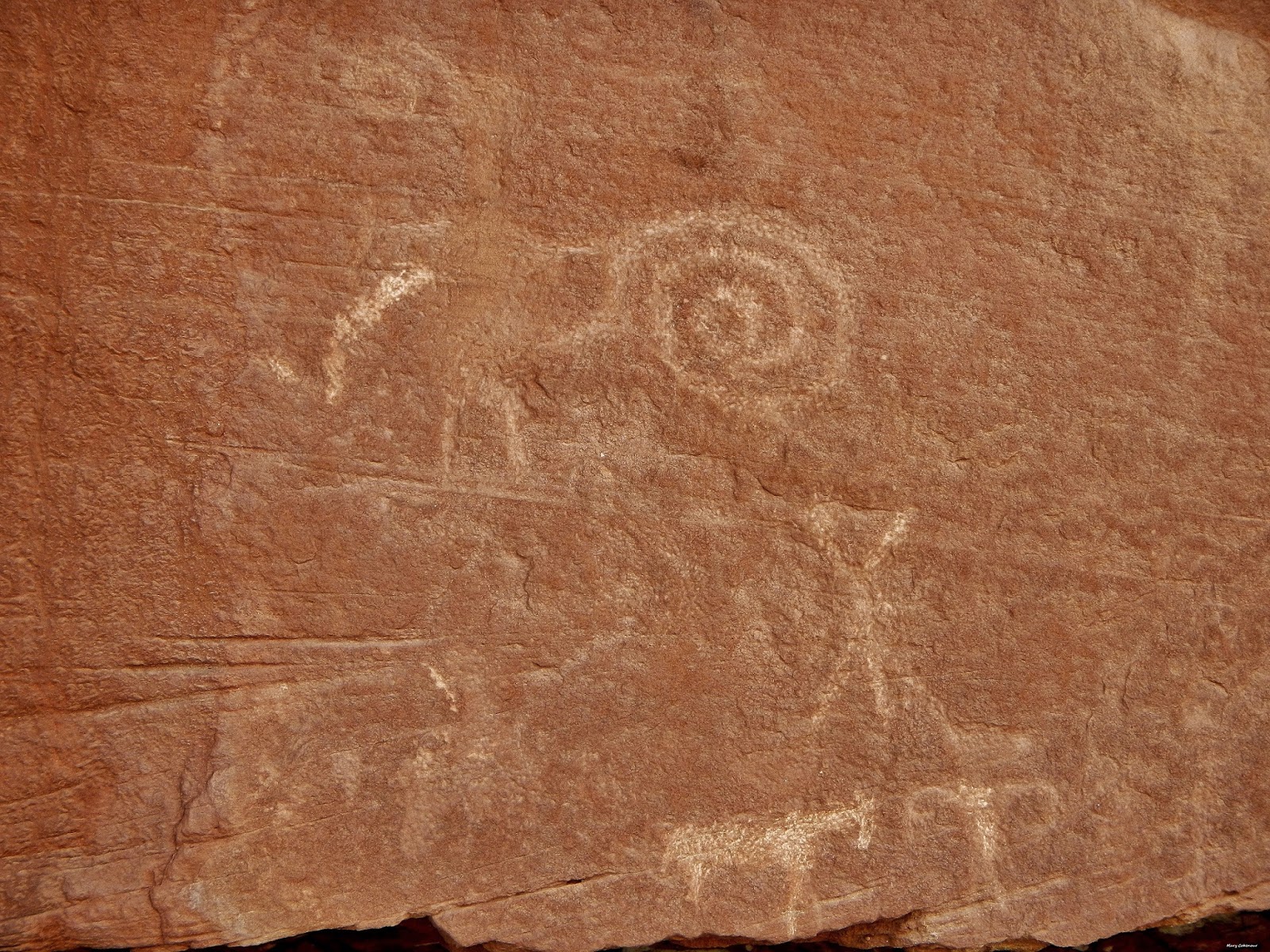 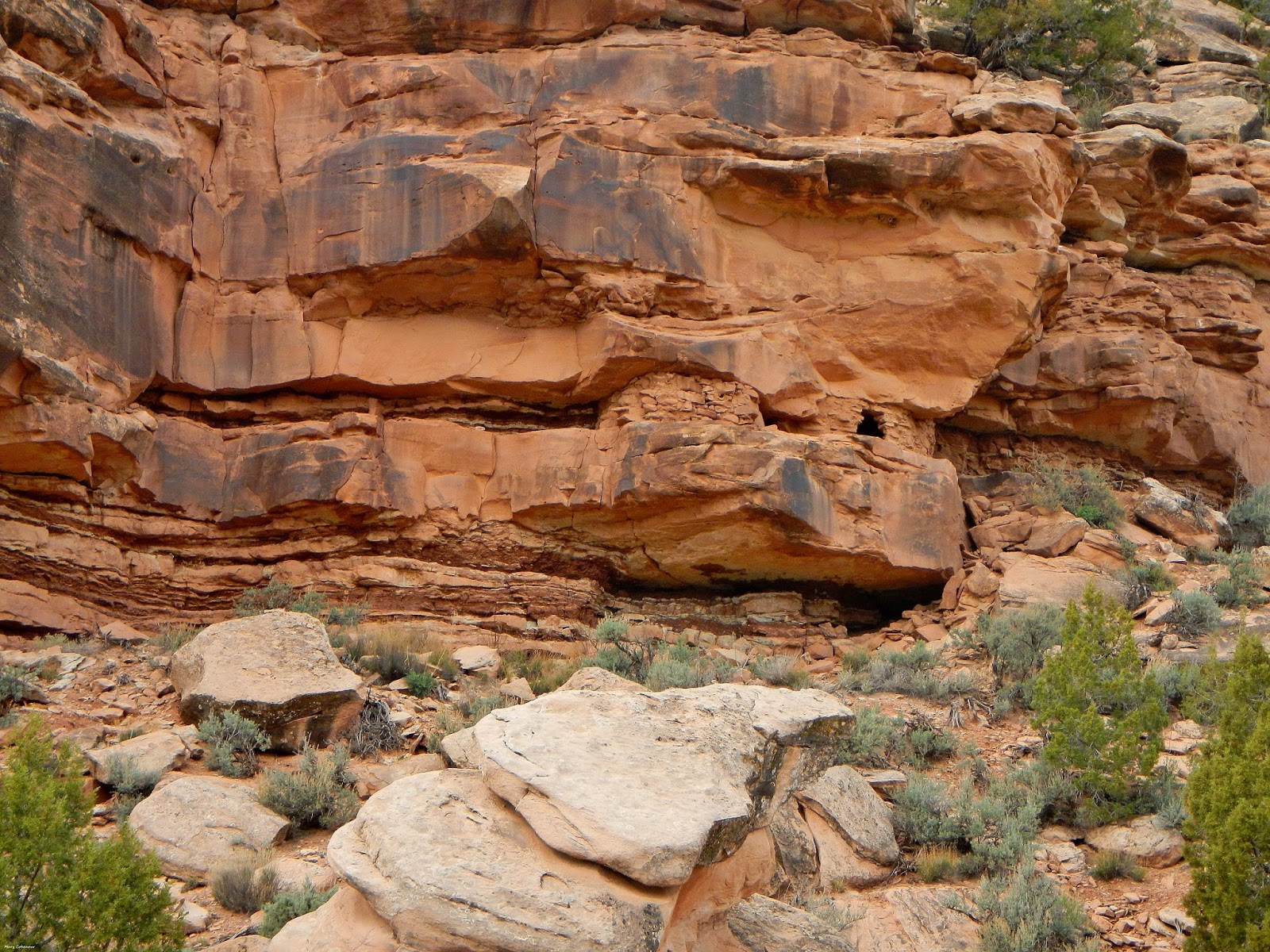 At the seven mile mark would be Three Kiva Pueblo; Deadman Canyon Road was only about two miles further north, so we knew we were almost to our goal area.  We had only driven 8/10ths of a mile before we both noticed the "holes" in one of the walls to the west.  Were they ruin doorways or windows, entrances to mines or simply just caves; well lets go find out!  Driving the dirt trail (it dead ends at a corral, or loops around the other way back to CR 146) nearer to them, sure enough, they were ruins and there were more further along the wall to the north of the "holes".  This time I stayed ground level while Roy climbed the much steeper pathway up to them; granaries, but not as broken apart as the ones we had just visited a few miles before. 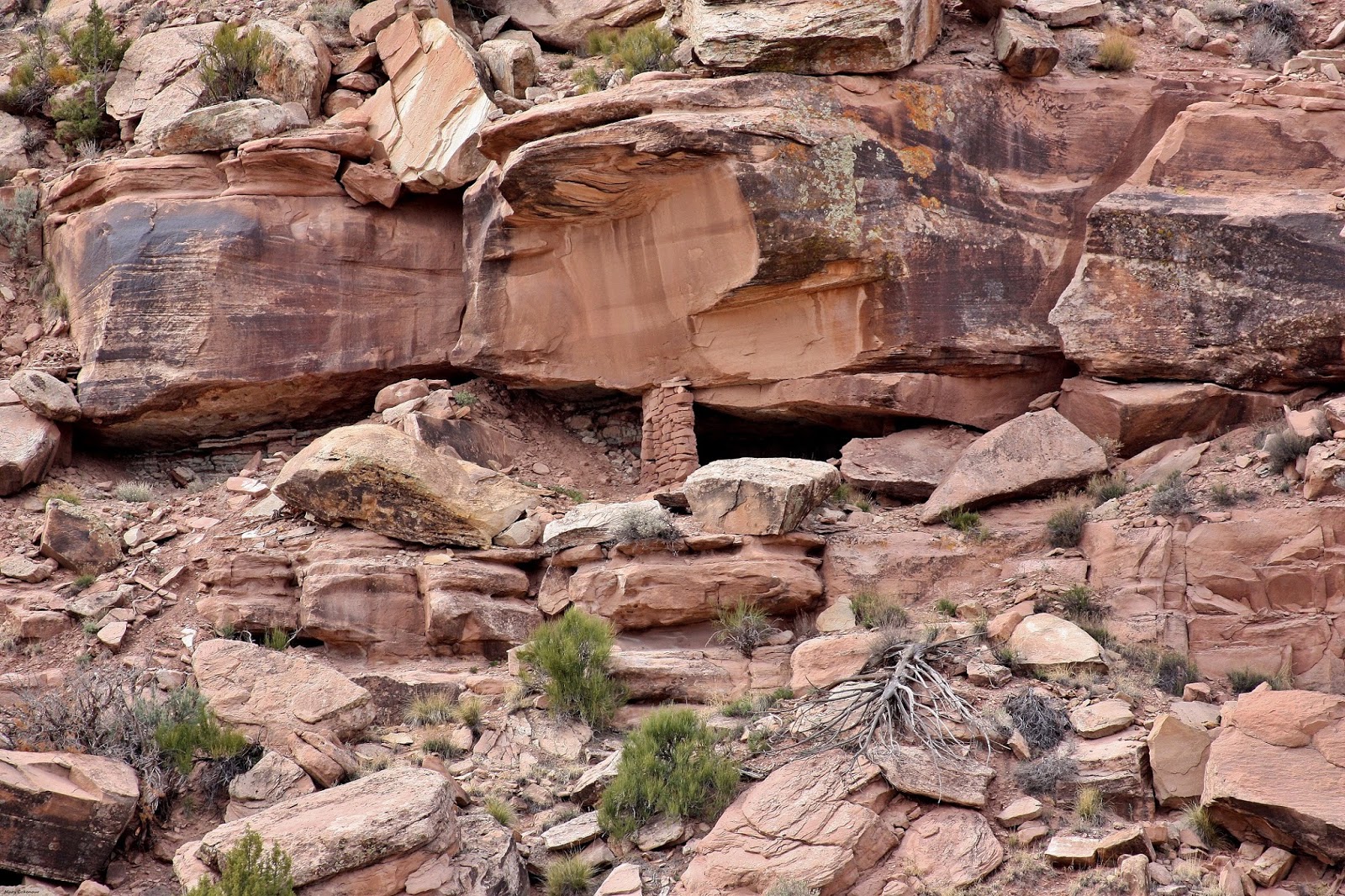 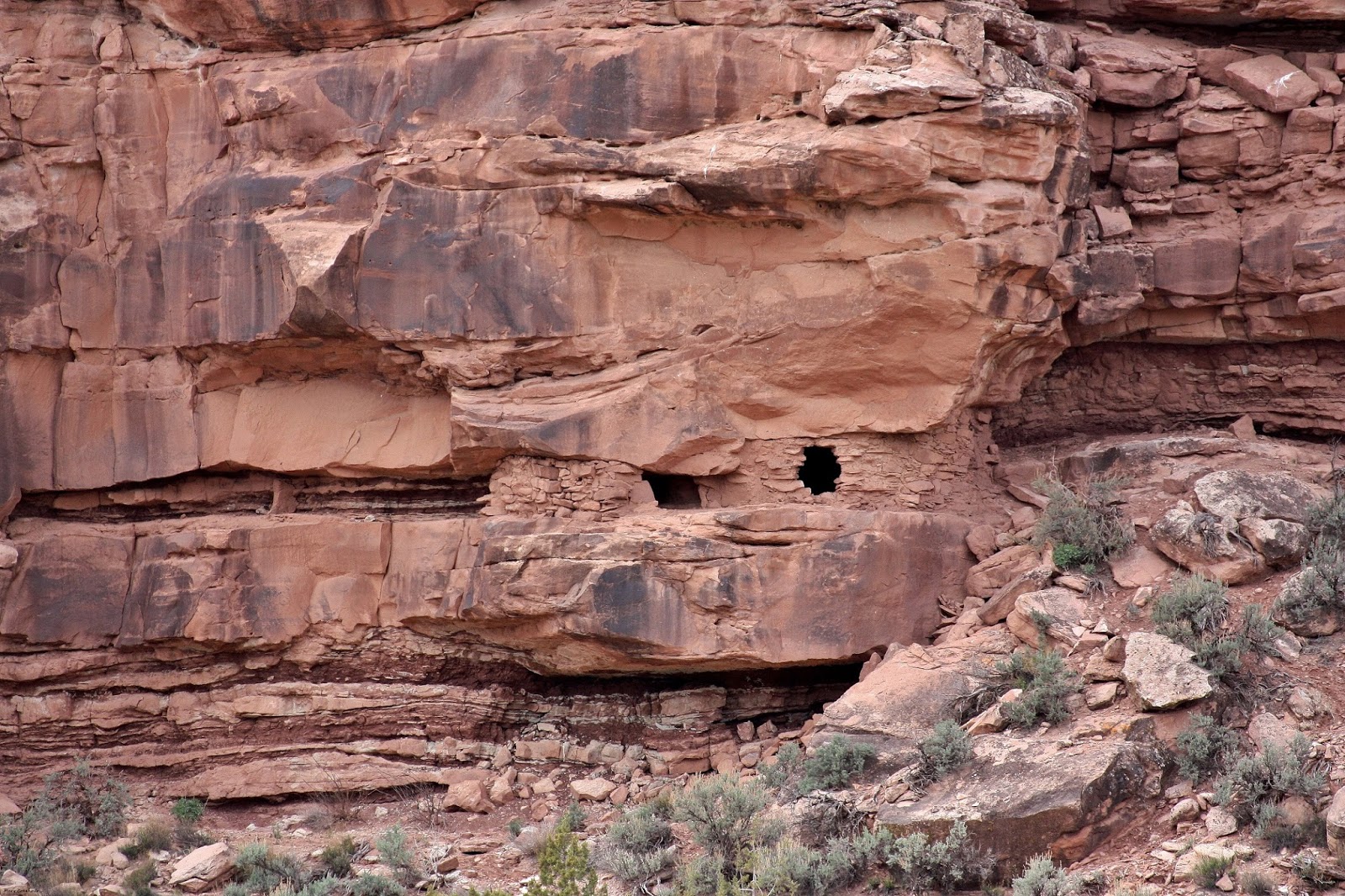 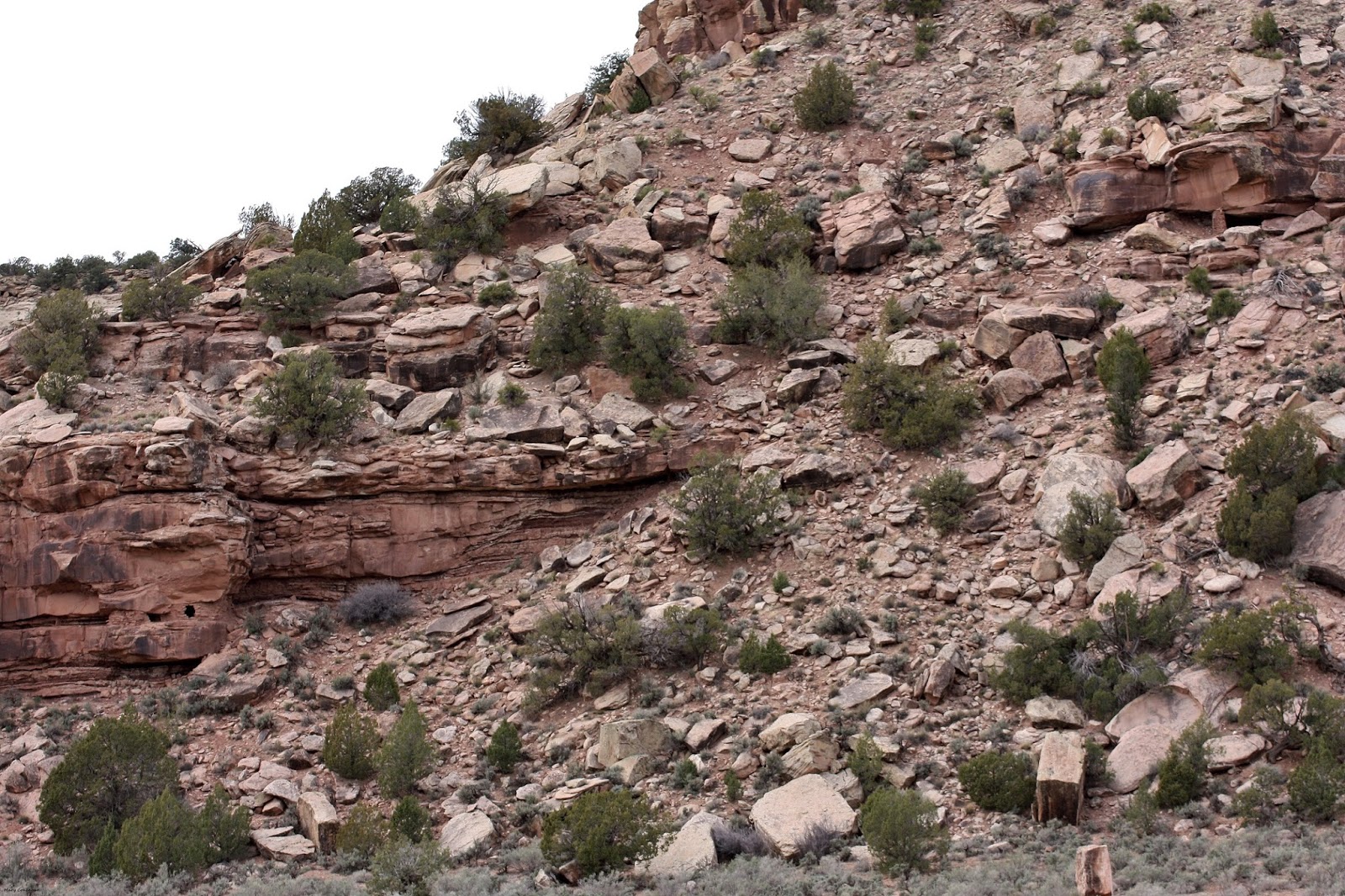 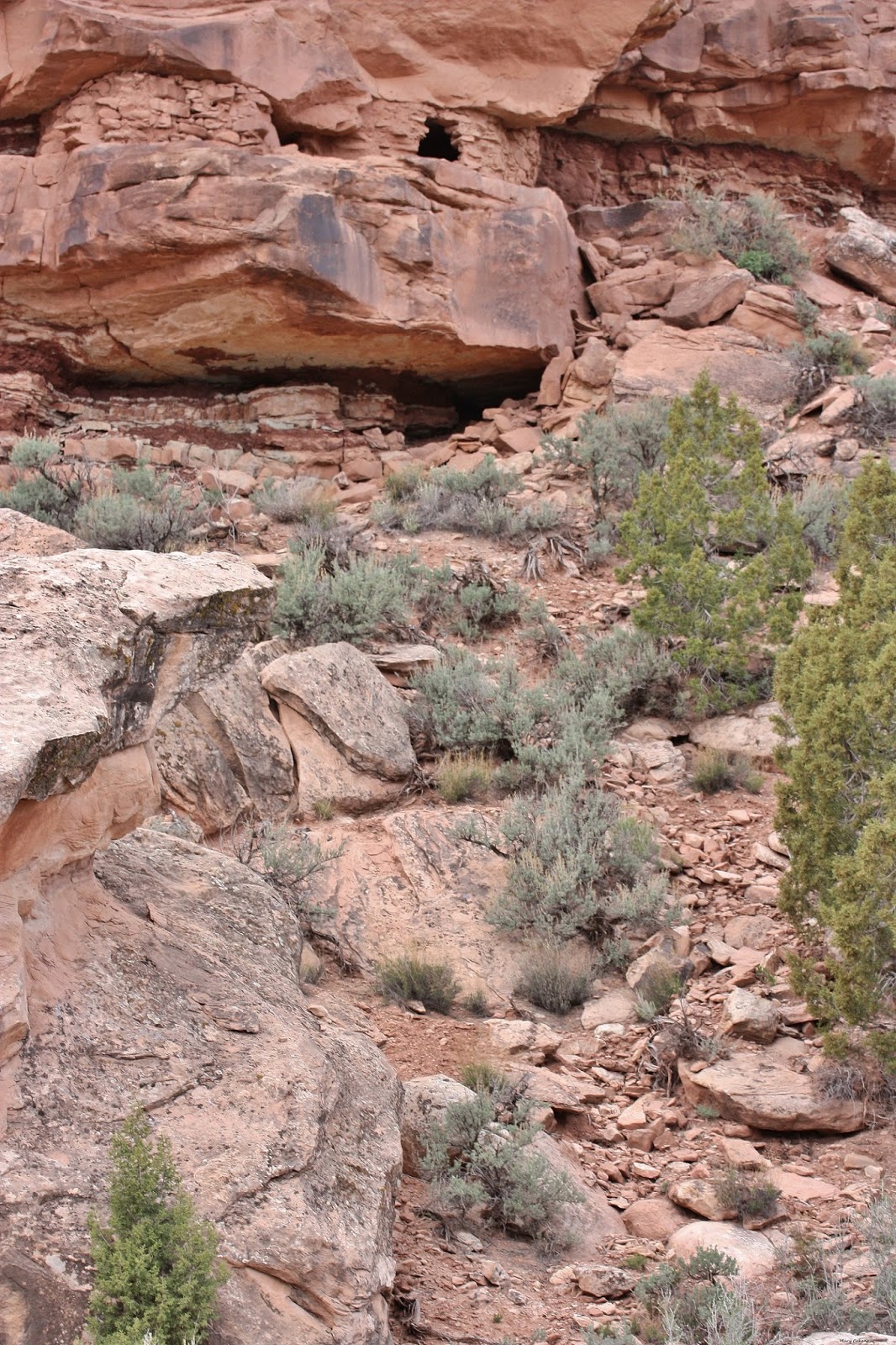 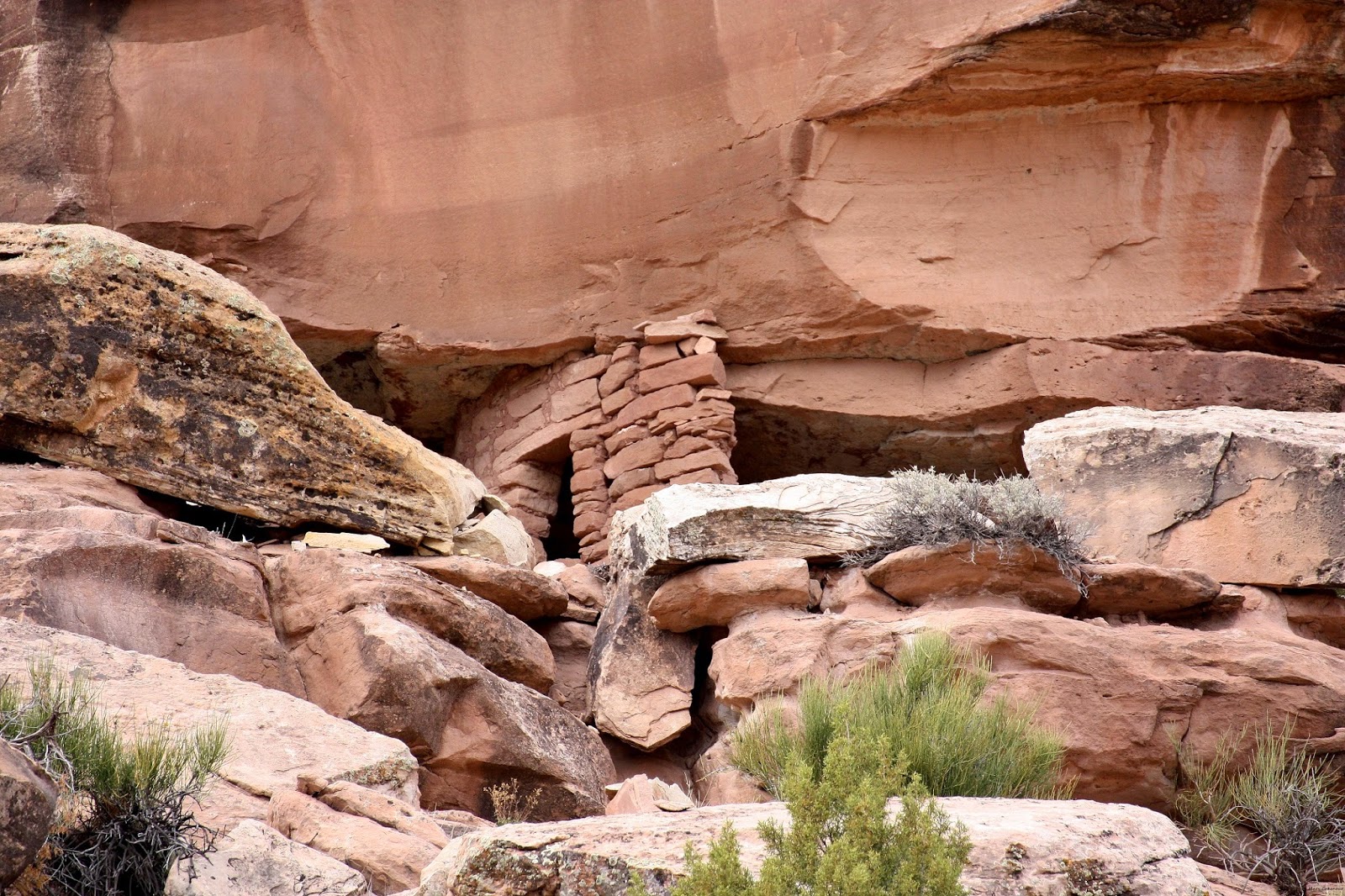 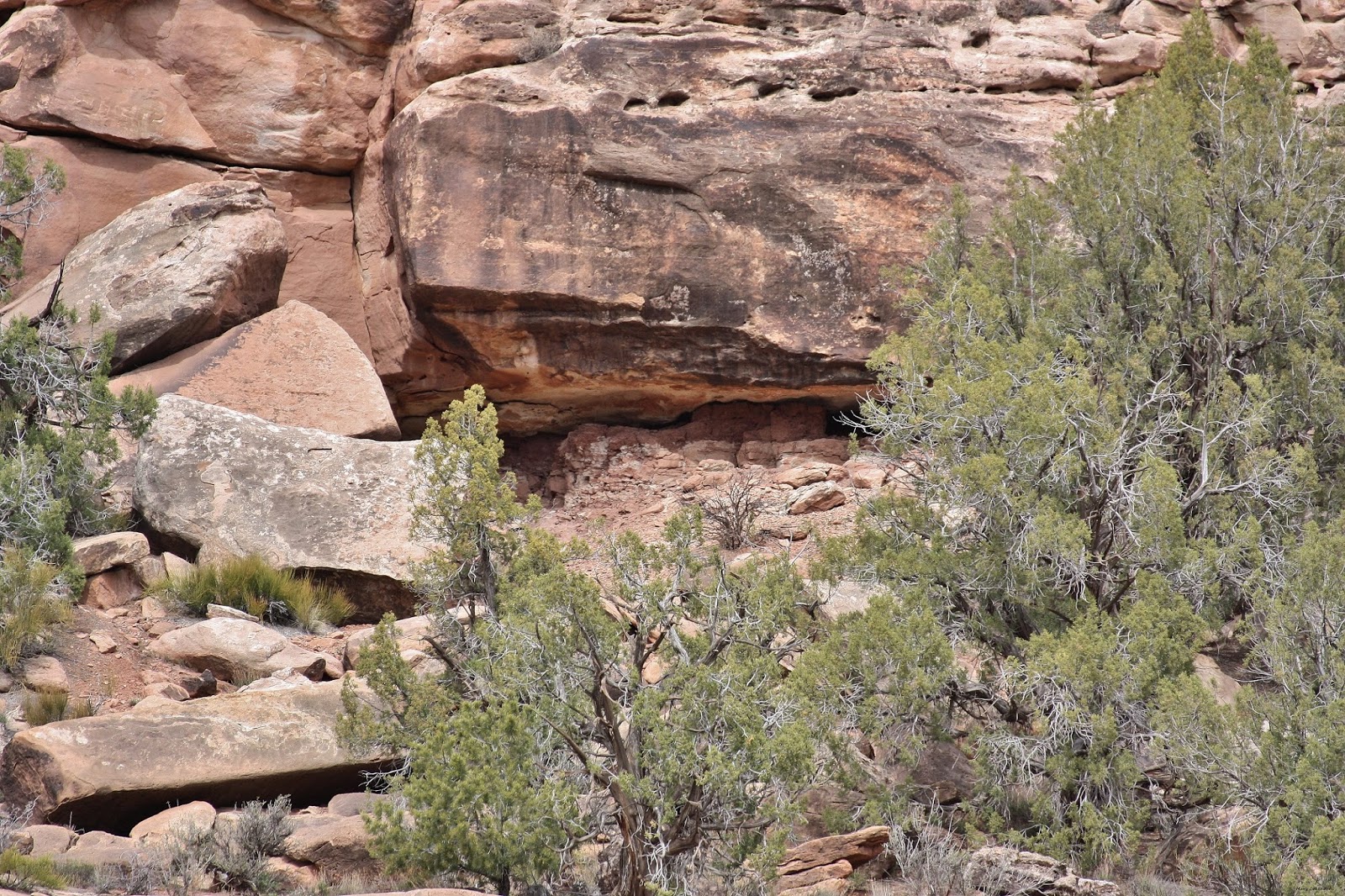 There were a few other cave like openings, but we truly could not tell if it was simply fallen rock inside, or ruins which had fallen apart or been destroyed.  As you can see, it could take days, weeks, months to explore everything you find; it's vast! 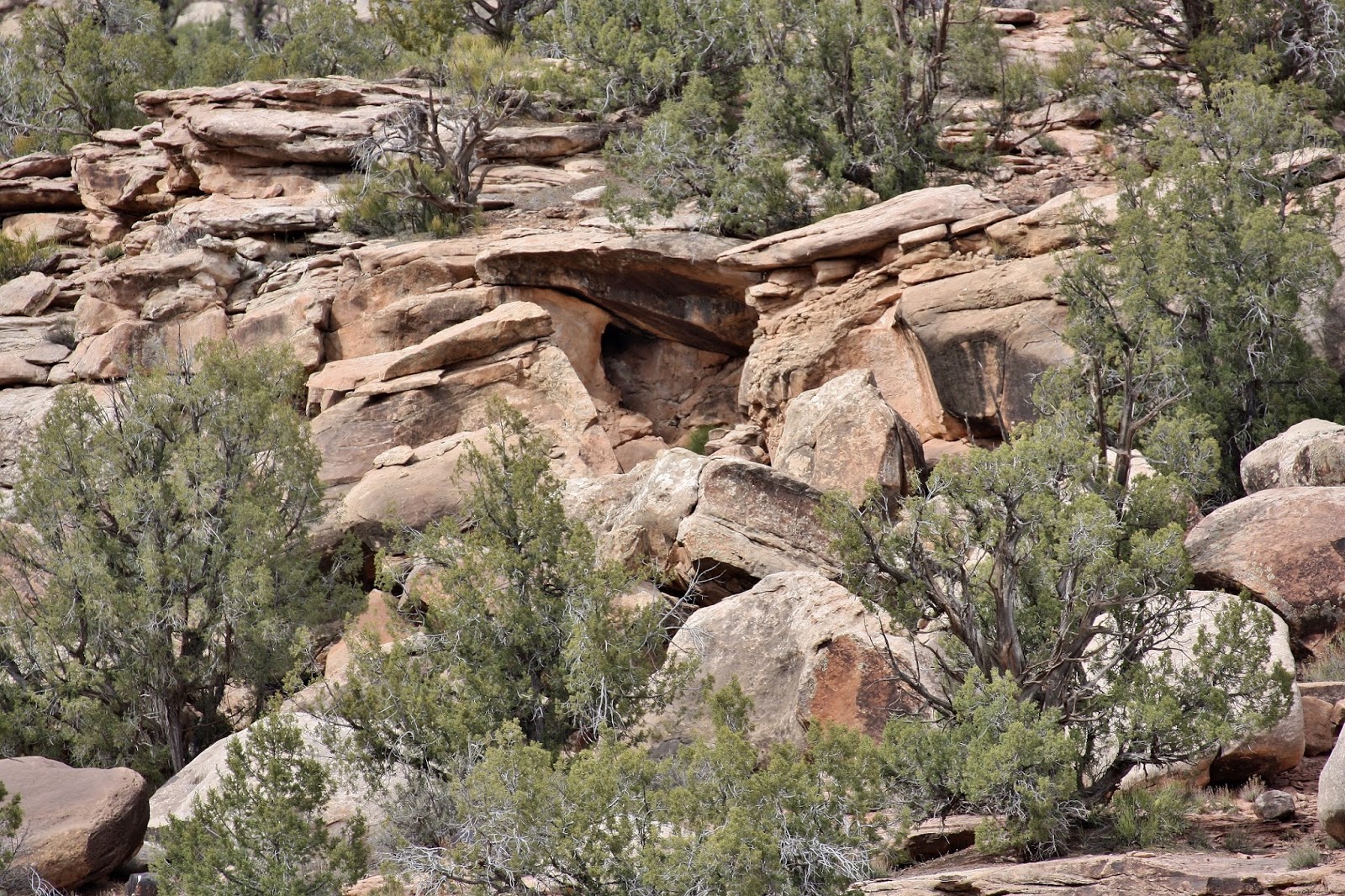 ﻿﻿
Besides the sagebrush and prickly bushes in the area, the occasional cactus can be found; this time it was a claret cup, but too early in the season to be blooming. 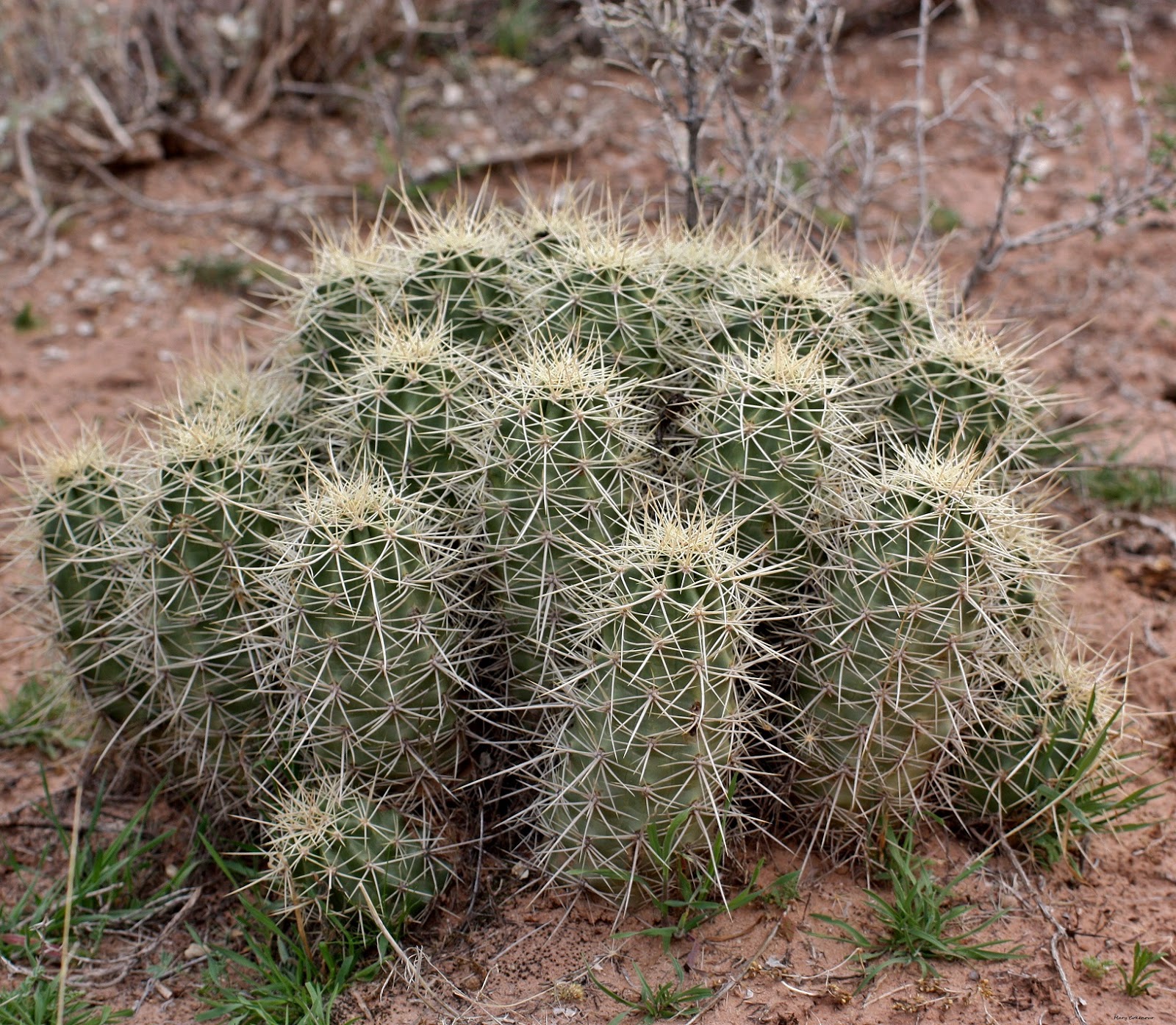 Anyway, our original goals were Deadman Canyon Road (CR 2381) and the Bradford Canyon Ruins...wait for it, wait for it...