...wait for it, wait for it...alright, I'm ready to write it up now. Finding Bradford Canyon Road, and the ruins associated with it, had to be one of the biggest stresses we have encountered yet. How to explain why this stress was so different; when we're adventuring, the adrenaline rush causes an overall stress to the mind and body. The next day though, we wake up refreshed and raring to get going on our next adventure. This time the stress was due to annoyance and anger; we couldn't find the ruins due to the misinformation we found on the internet. We couldn't find the road itself due to the lack of road signs and lack of information about the canyon; and when we did find the road, we couldn't even ride it all the way through due to its condition.  However, just when we were ready to totally give up and head home feeling defeated; WE FOUND THE RUINS!!!  The instructions we found on the internet said they were two to three miles, on Bradford Canyon Road, from the Deadman Canyon Road junction...WRONG!!!  Alright, enough complaining and now the entire story; I better post the map first, so it can be easier to follow along. 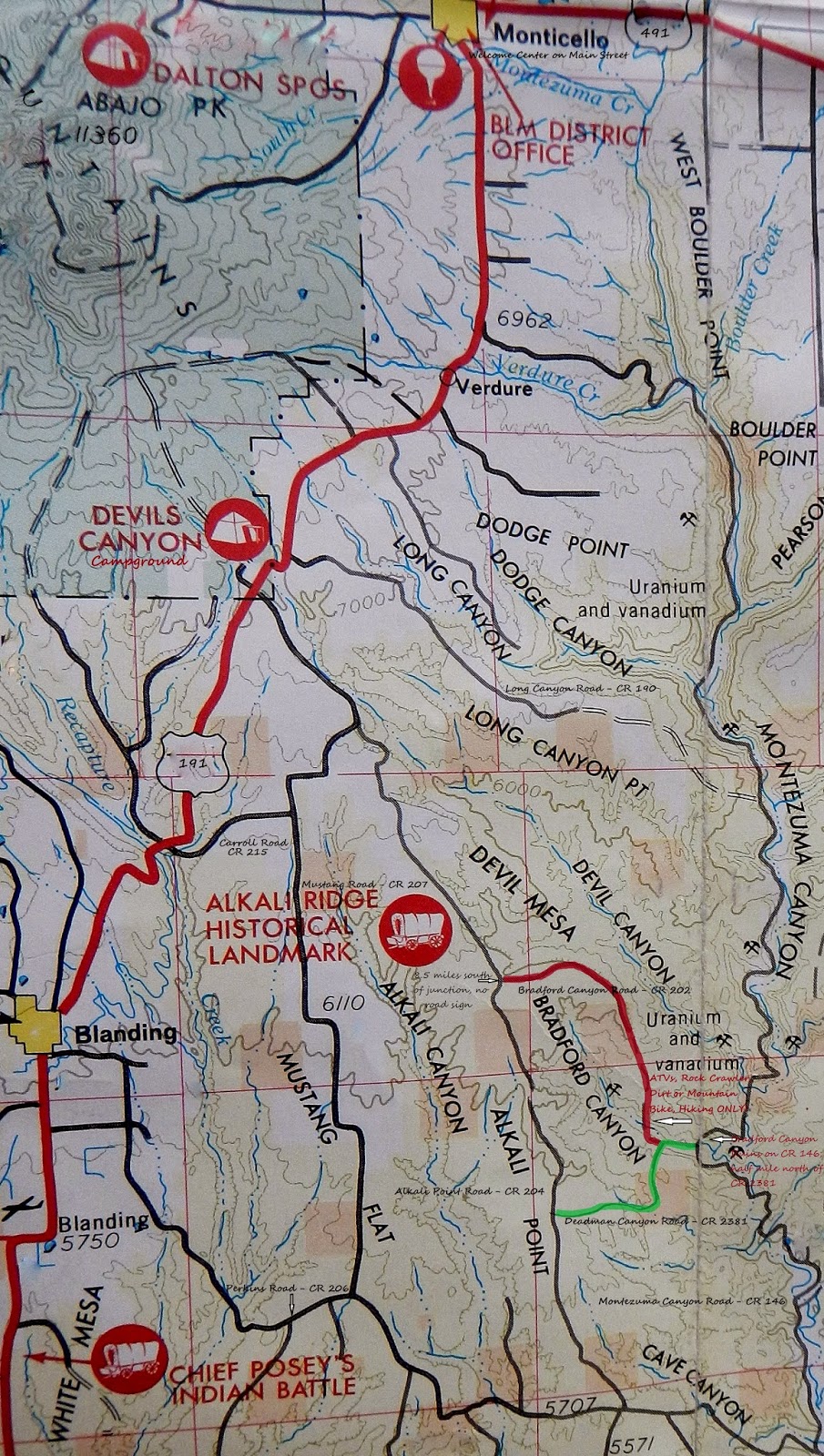 ﻿
...and a little history behind the name.  Bradford Canyon is named after Sylvester Bradford and his wife Thora Black who met in 1919 as teenagers, and married shortly thereafter.  Sylvester was instrumental in the development of a tunnel that would help provide a water source to the town of Blanding.  Of course this took place in the Abajo Mountains, and the canyon itself is way over on the other side of what is now Route 191.

Bradford Canyon's true claim to fame is the vast amount of vanadium and uranium extracted from the various minds in the area.  One such mine was the North Star which was bought over by Charles Robert King of Grand Junction, Colorado; he renamed it the Leo J, but it was also known as the Lucky Strike Mine.  Not so very lucky for Charles though; mining since 1925, he purchased the mine in 1954 and was only working it for two months before tragedy struck.  As reported in the Deseret News, November 03, 1954; Charles had laid, and was firing, 15 charges of dynamite when one went off prematurely.  Charles was killed; his son, Ralph King (18 years old) suffered from a fractured skull, broken collar bone and both legs broken.

Now to our adventure; if you look at the map I've posted, Bradford Canyon (CR 202) and Deadman Canyon (CR 2381) Roads meet at a certain point and lead out to Montezuma Canyon Road (CR 146).  Besides trying to find the ruins I've only found two photos of on the internet, not in any books of the area, we wanted to travel the road and see what there was to see.  From the junction of CR 146, we traveled up CR 2381 about 8/10th of a mile till we found another road; it was graded dirt for about 3 miles until we found a petroleum storage tank.  Then the road turned impassable for the SUV; rough, potholed, uneven with rocks; in other words, great to travel if you're on an ATV, rock crawler, mountain or dirt bike, or using just your own two feet for hiking.  No ruins though, but we did see large square-like openings up on the wall face; not sure if they were mines at one time, or the dumping chutes for tailings. 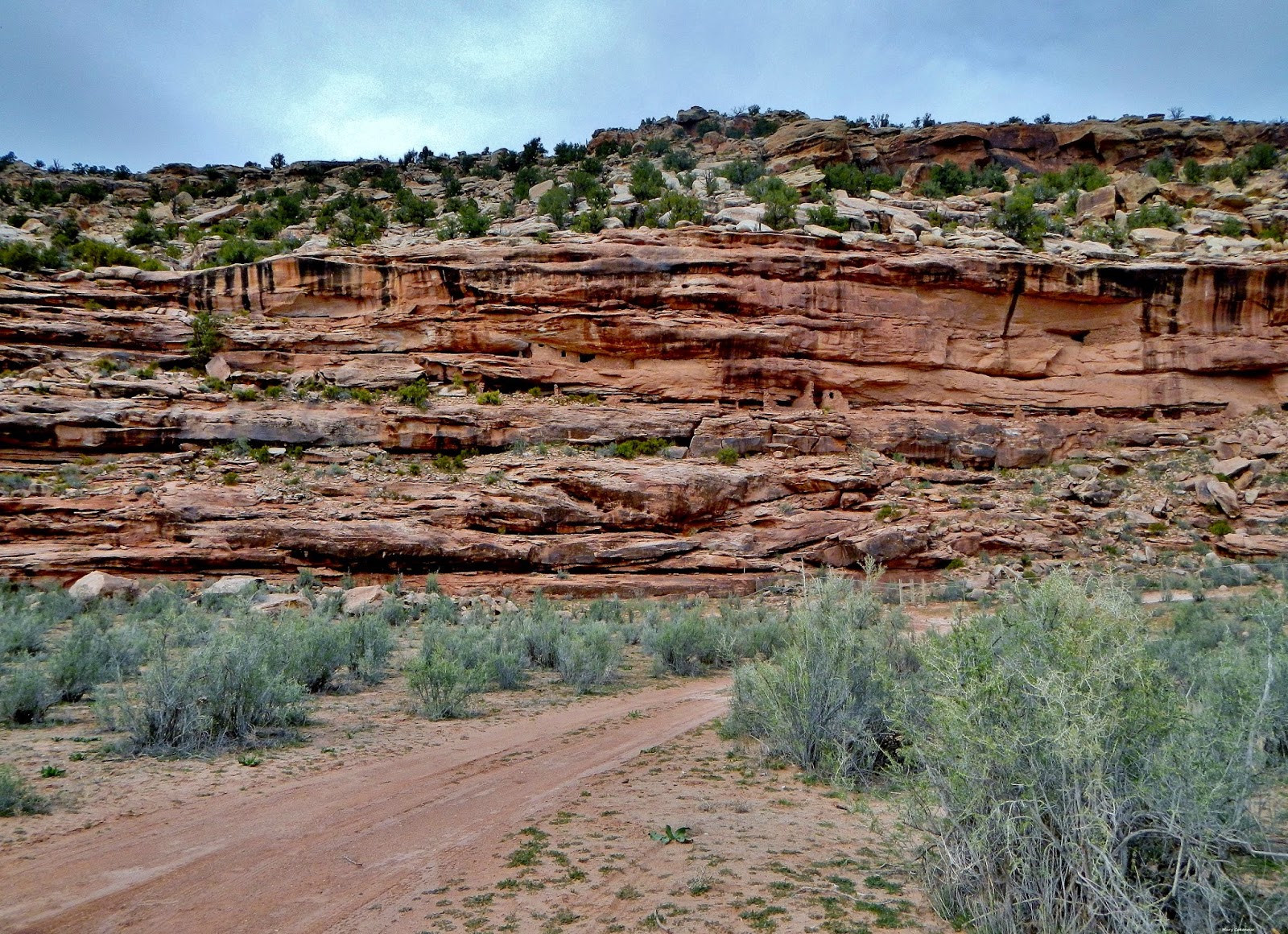 Back tracking to CR 146, we had decided to head on home; we were feeling disappointed, annoyed and defeated by then.  When what to our tired, yet still wandering, eyes did we spy...who put those ruins there!!??!!  That's right, the ruins were only a half mile north of the CR 146/CR 2381 junction; a dirt trail which loops down to and in front of the fenced in ruin site, and back to CR 146 again.

The large amount of ruins along the ledges simply put us in awe; we walked up and down along the lower walls looking for any rock art, but none was to be found.  A local resident and his family did make an appearance though.

Surprisingly, we found our energy, and attitude, had been renewed here; we decided to travel up Deadman Canyon Road to its ending (or beginning) on Alkali Point Road and search for the other side of Bradford Canyon Road there.  This way I could, at least, be able to mark it down on the map I have been creating of the canyons, and note at what point it was not suitable for a standard vehicle.
Cutting to the chase, we get to Alkali Point Road and begin driving north towards its junction with Mustang Road; we'd only gone about a mile before we saw a graded dirt road to the east.  No signs, not marked on any of the maps, but we decided to check it out anyway...don't, it leads to another petroleum storage tank.  Back track to the Alkali and north again; another mile and another graded dirt road (about 5.3 miles south of the Alkali Point and Mustang Roads junction) without a sign; yep, we repeated the procedure. 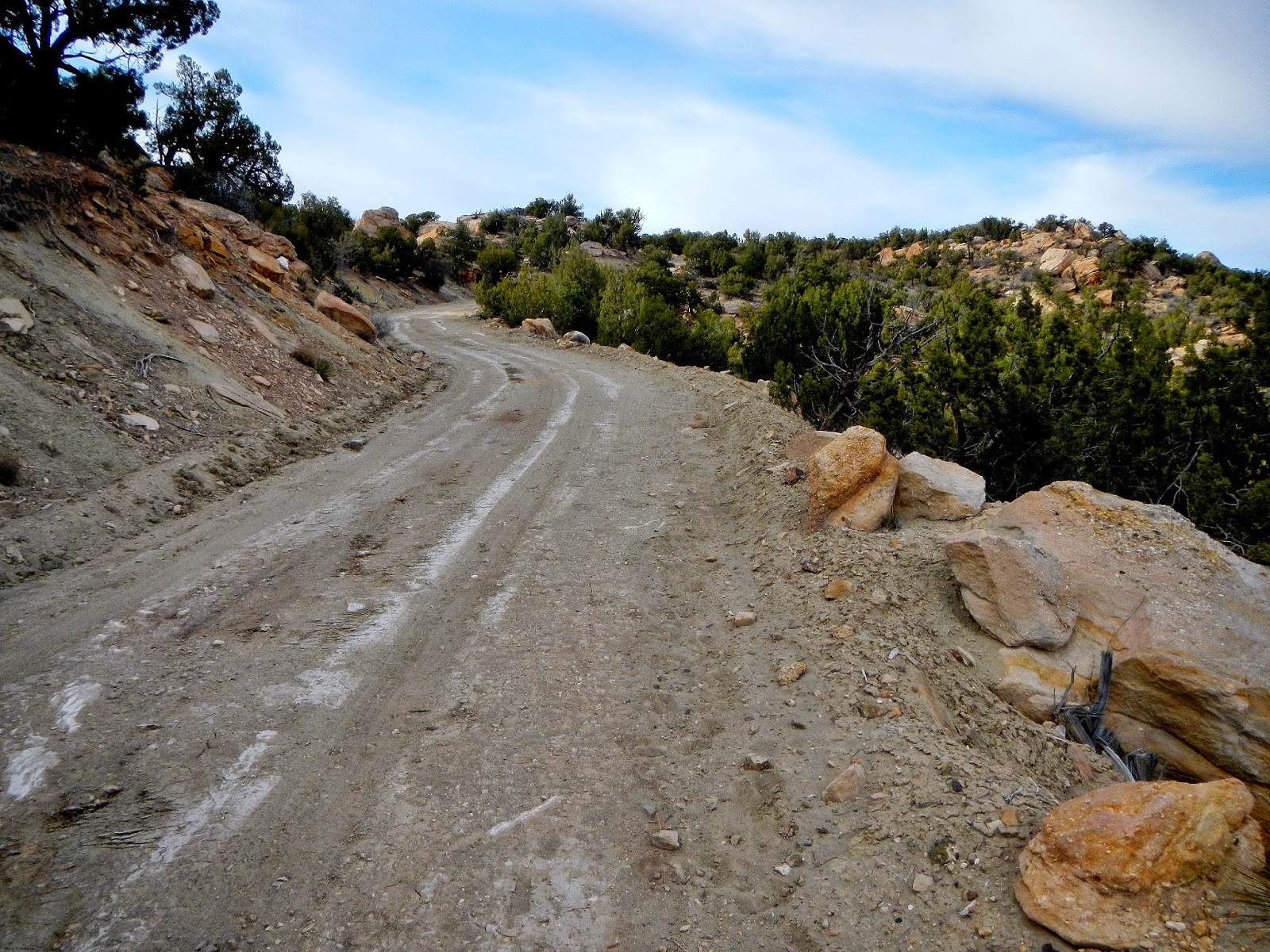 We'd gone about five (5) miles when we meet up with a wire and wooden post fence across the road; what the heck!?!  Suddenly Roy remembers a crucial piece of information, "Hey hunny", he says, "maybe I should hook up the GPS and see what it says."  I'm sure you can all imagine the look on my face, and I will not repeat the words that flew out of my mouth.  Guess what the GPS told us; yeppers, we were on Bradford Canyon Road; since there was no sign saying keep out or no trespassing, I jumped out of the SUV, opened the gate, Roy drove the vehicle through and I made sure to close up the gate tightly once again.  That's when the lovely graded dirt road did a Jekyll and Hyde on us; it turned into an uneven road of sand, dirt, rocks for about a mile before reaching a split in the road.  I tell you one thing, the views of Bradford Canyon are pretty spectacular from this road; at one point we could see Sleeping Ute Mountain in the distance. 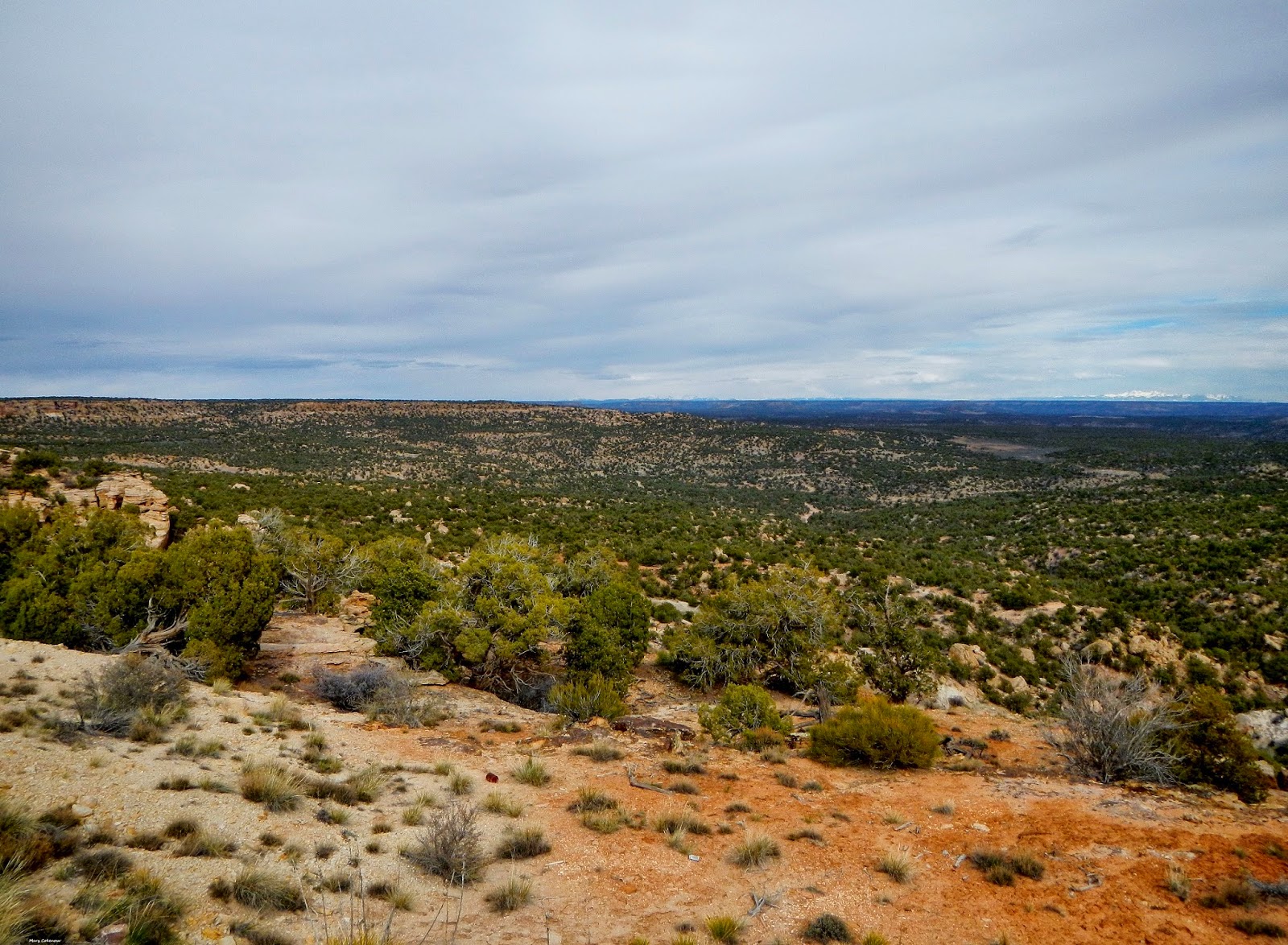 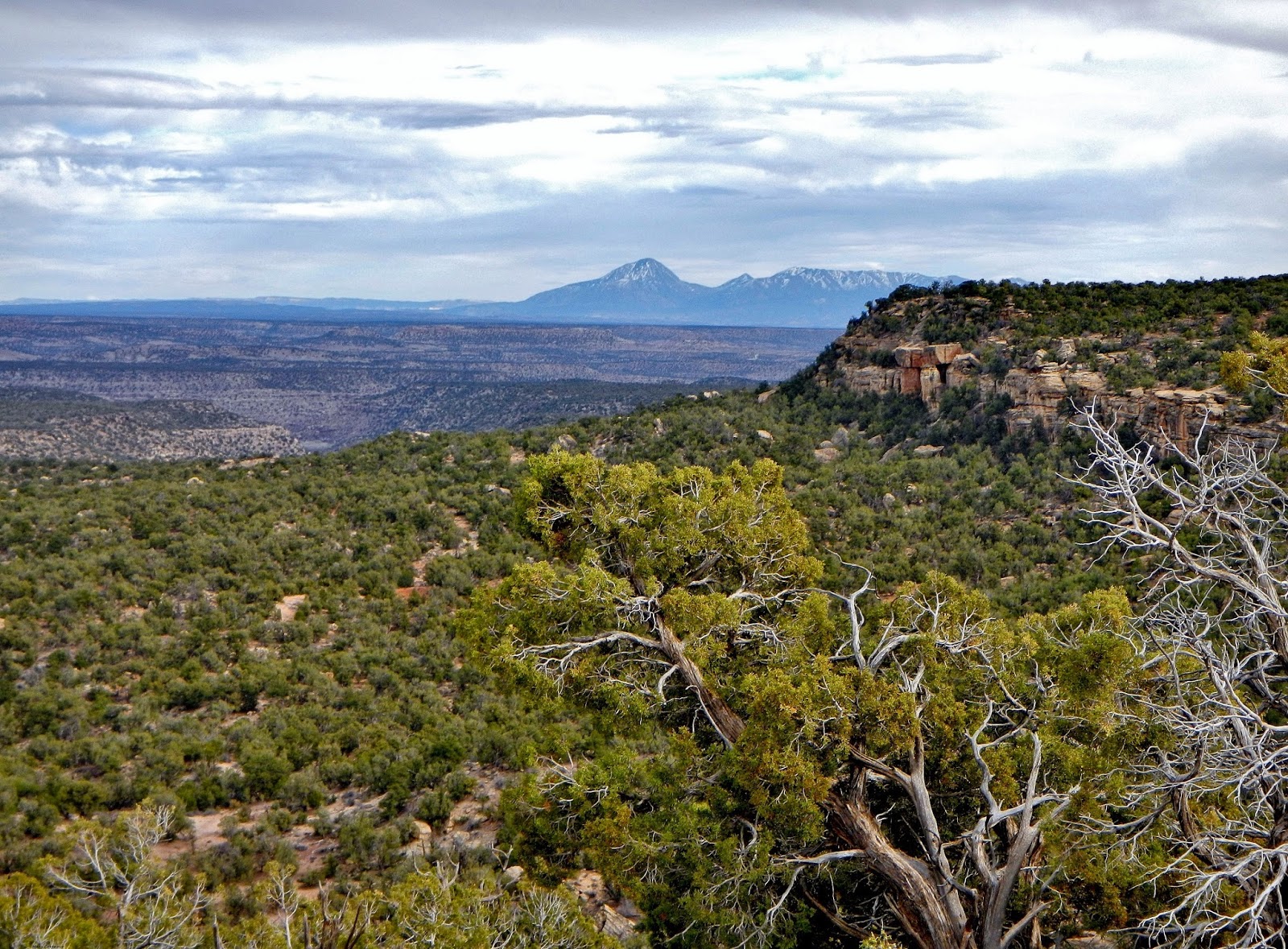 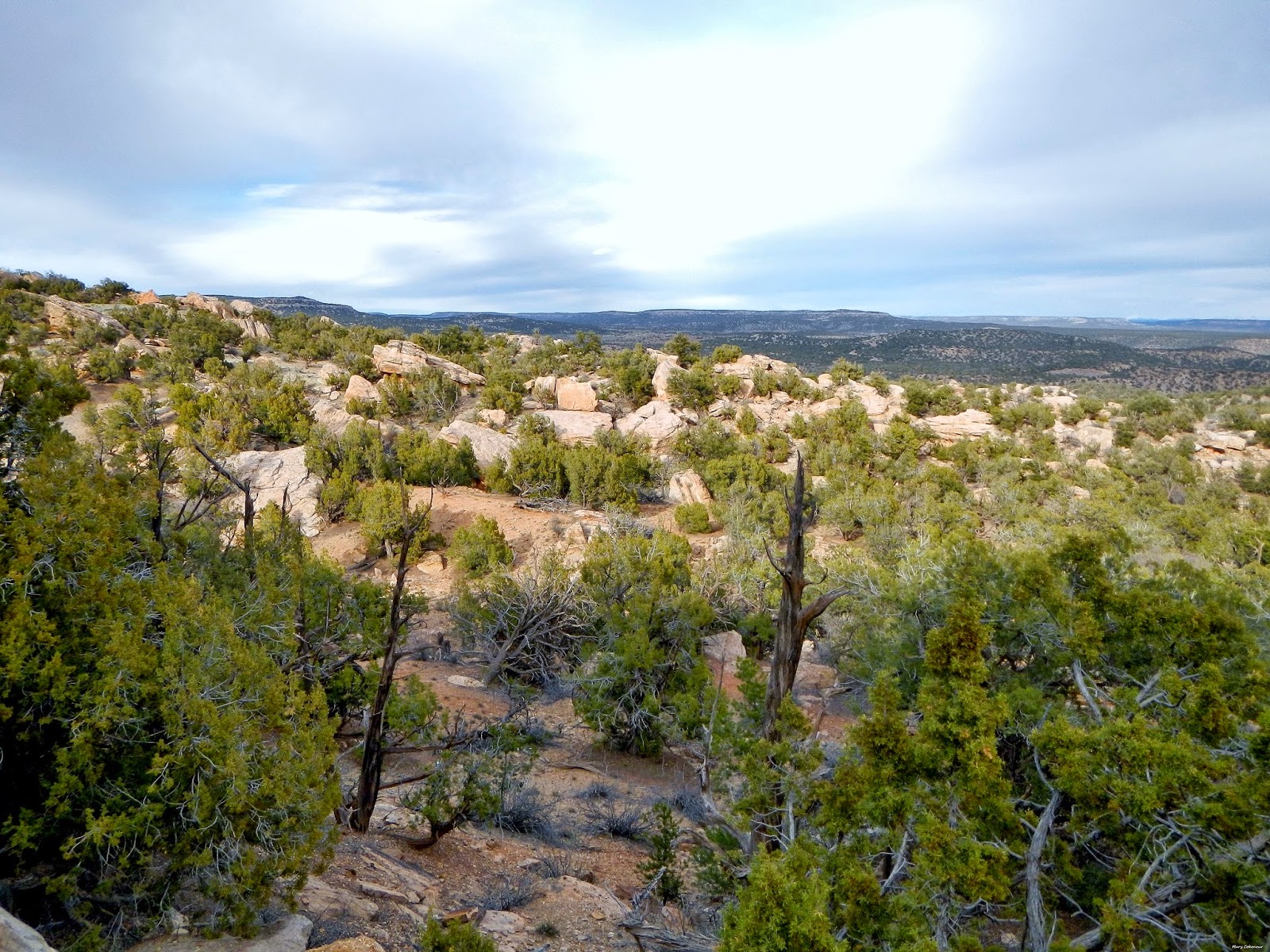 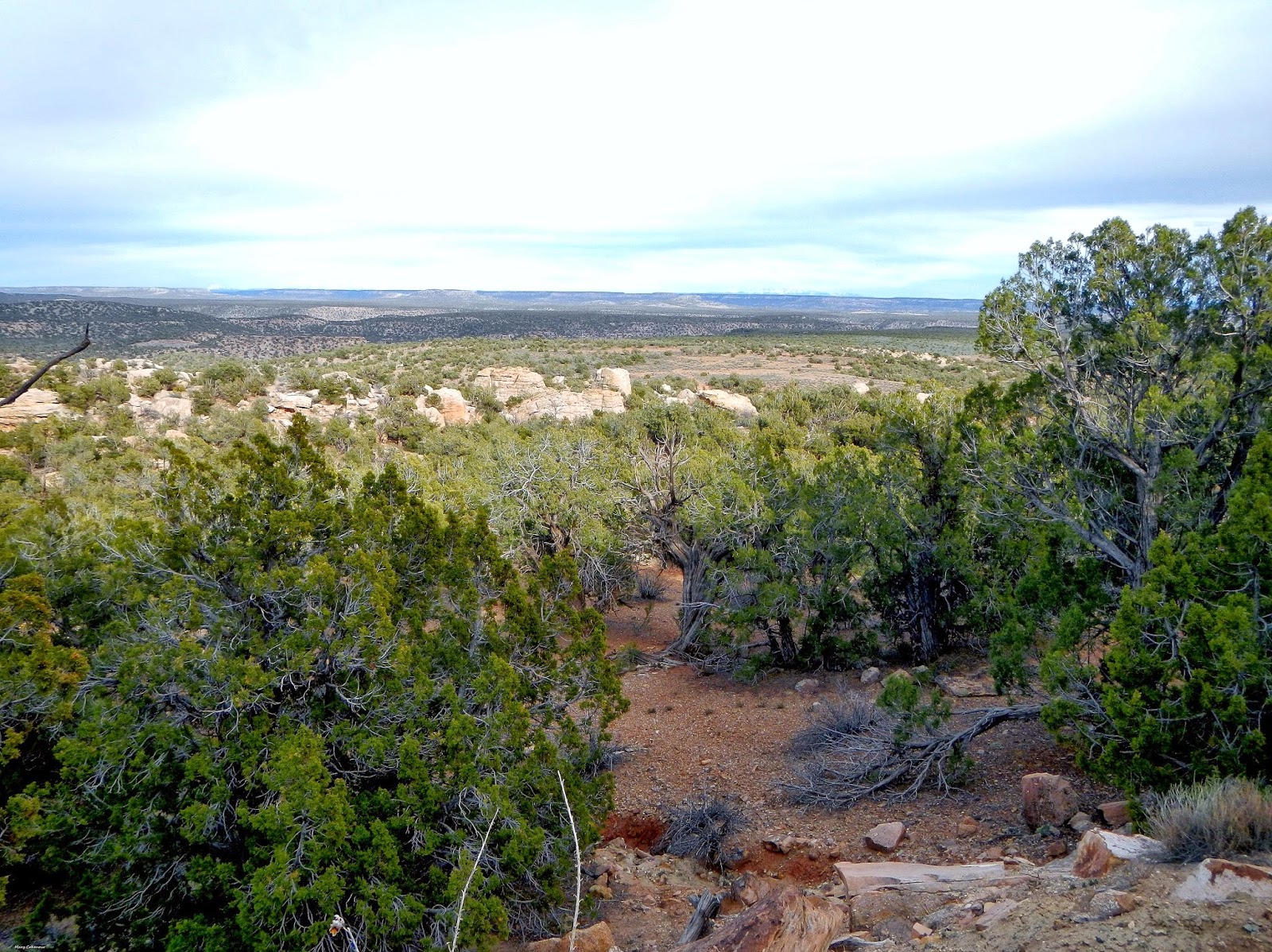 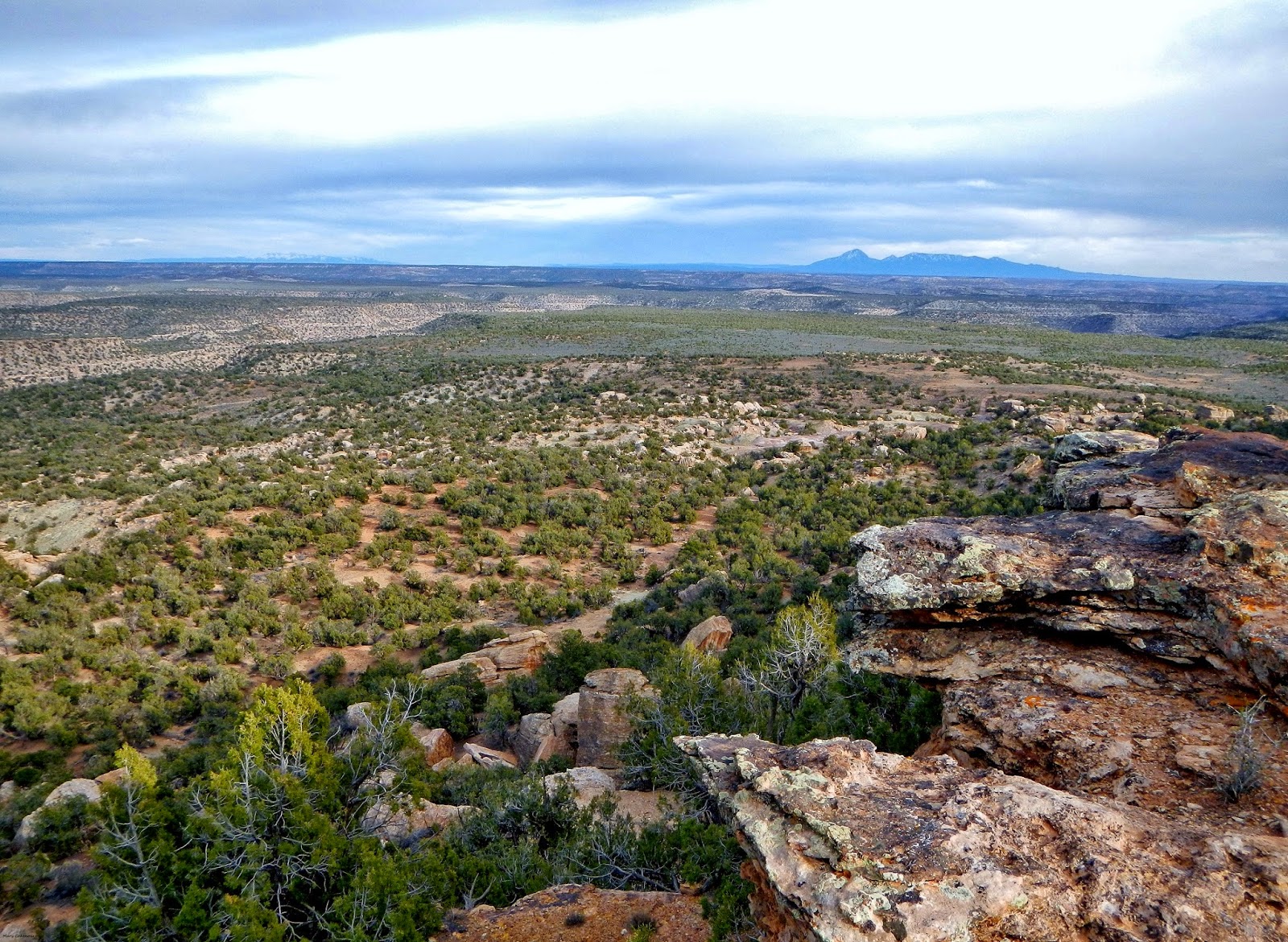 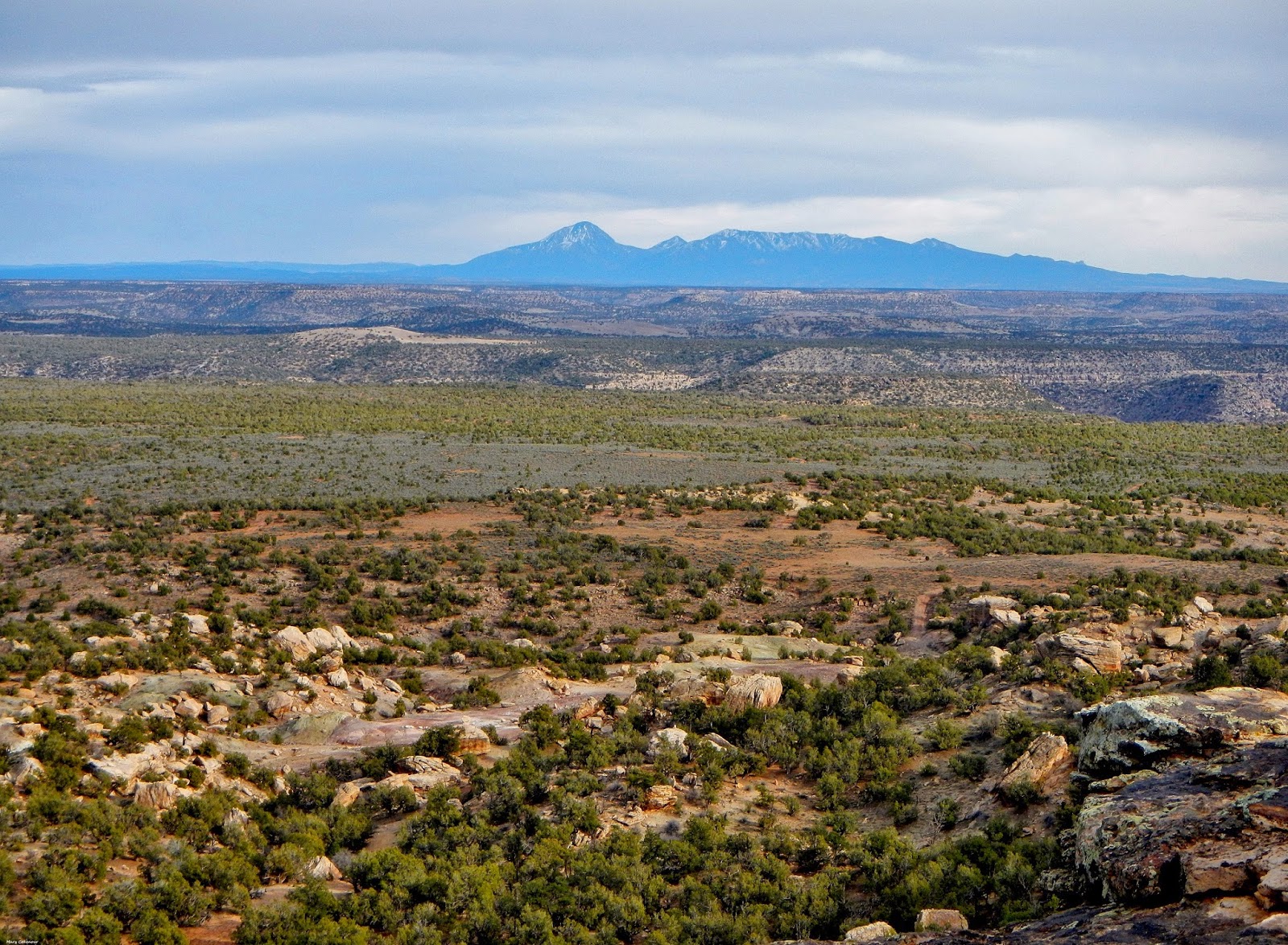 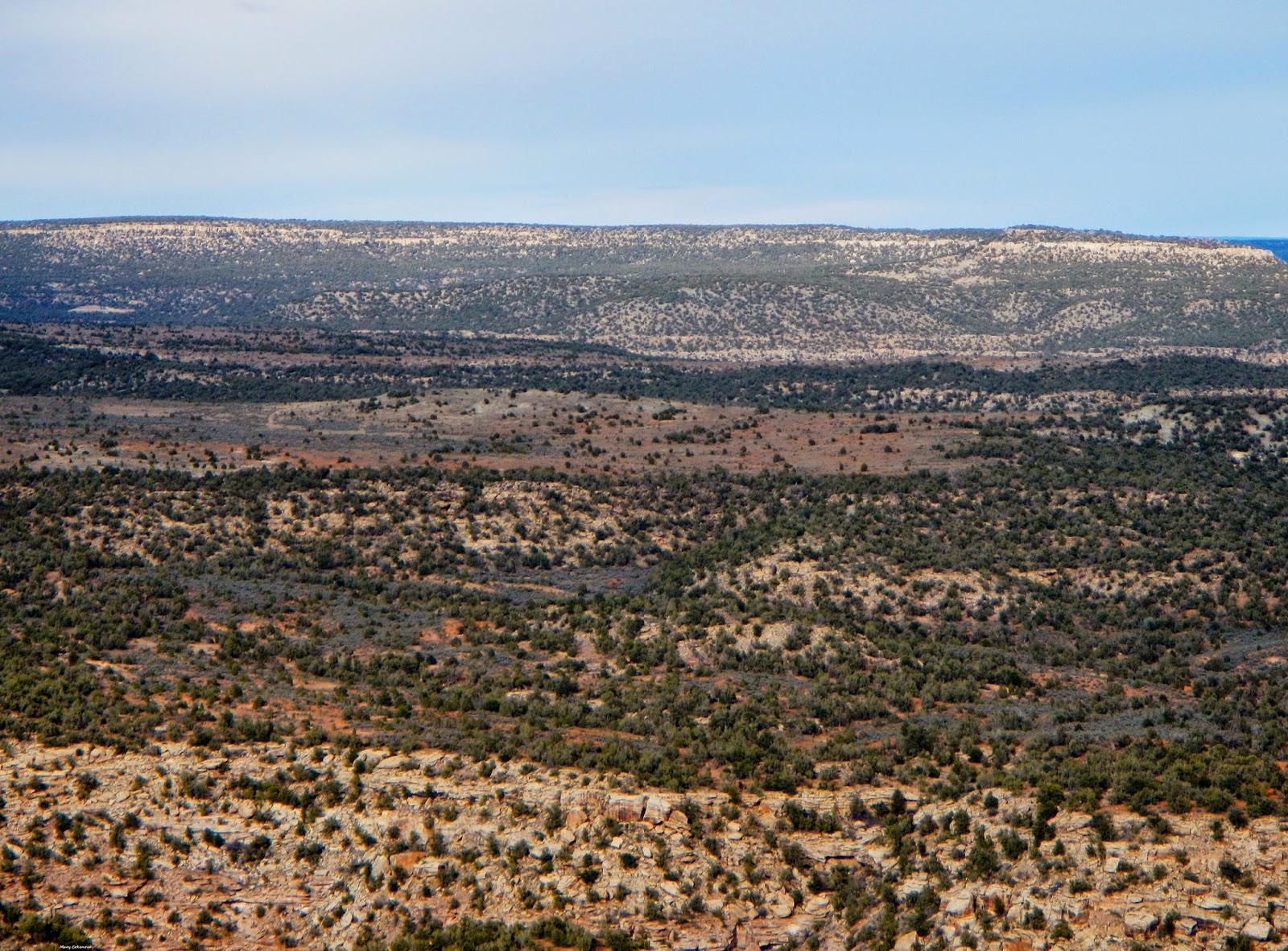 Alright Mr. GPS, where do we go from here, left or right? According to it, going right would lead to Deadman Canyon Road and off we bounced on the potholed, rocky dirt trail. Yeah, that section of roadway from the wire/wooden post fence to the split was a picnic compared to what we were on now. We'd gone only a couple of miles before the canyon scenery opened up before us again; indeed, there was Deadman Canyon Road, I could actually see it! Could we possibly be almost there; would we actually get all the way through to Montezuma Canyon Road?


I do hope you weren't holding your breath for this one; we began a decline around one corner and met with the evil twin of the road we found impassable from the Deadman Canyon/Montezuma Canyon Roads section.  The GPS verified the route; in other words, unless you are on an ATV, rock crawler, mountain or dirt bike, or hiking; a standard vehicle will not make it through.  Ah, but then here's the secret revealed about why there are no road signs for Bradford Canyon Road (CR 202); it's to keep it exclusive to locals only!  It's not even listed on the San Juan County ATV Trails map available at the Welcome Centers.  Now you know where it is and do some ATV adventuring of your own; thanks to yours truly and my hubby.

Not being able to complete the entire road and explore the canyon truly disappointed us.  The next day we both felt as if we'd been dragged over the road, instead of driving it.  So, Bradford Canyon Road is going to have to go back onto the "to-do" list for the day we have the proper vehicle to maneuver the entire adventure from start to finish.